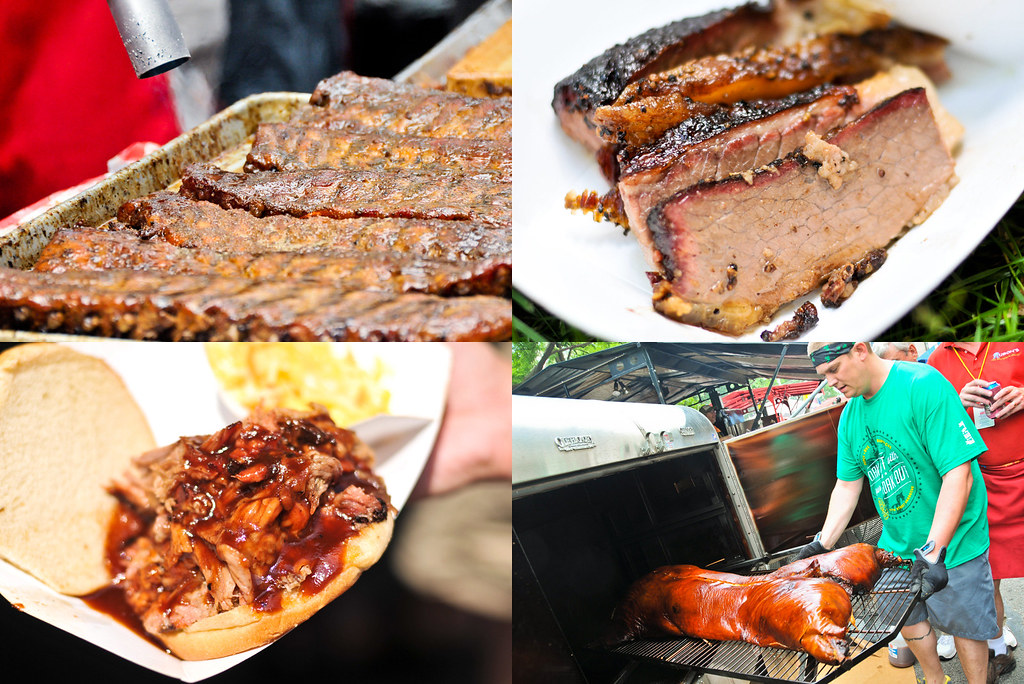 "10th annual," the phrase that preceded this year's Big Apple BBQ Block Party, is an open invitation to reminisce. Right behind the most common question of my favorite bite, everyone was asking what number year it was for me at the party. I hadn't really thought about it much before this past weekend, but the realization that this was my eighth Block Party—missed the first year because I didn't know about it, and one other year because I was out of town—had me awash in gluttonous, slow-smoked memories and how far I've come from secretly sneaking shots of the pitmasters I admired to now regarding many as friends. The Meatwave's presence at the Block Party runs just as deep, with a tradition of procuring a Fast Pass, inviting all Meatwavers, and then wallowing in the immense seas of stellar barbecue flowing off the smokers in the streets surrounding Madison Square Park. It's an event that's now engrained in my heart, and this year just added another great memory to look back on, along with a few extra deposits in the old arteries. 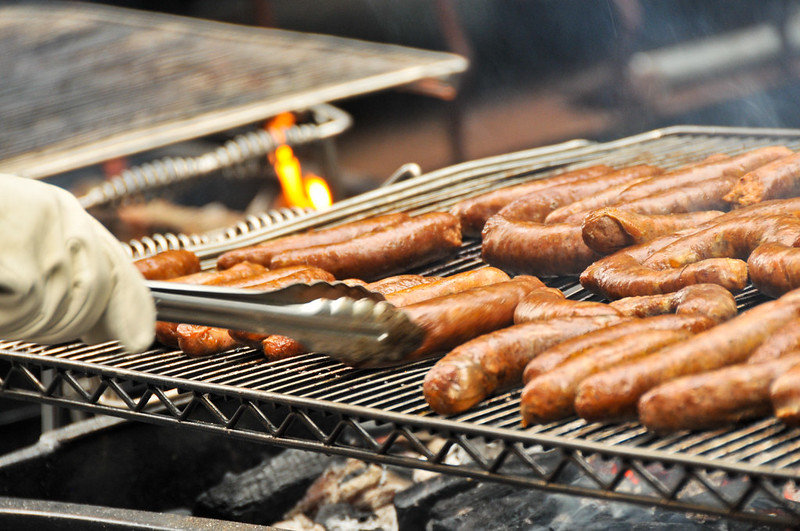 I like to get to the Block Party early, around 10am, an hour before it's official open. At this time the masses have yet to arrive and I'm able to just wander the streets and take in the calm before the storm. This is also a great time to chat up some pitmasters and watch as everything is skillfully prepared to quickly start feeding the coming herds. 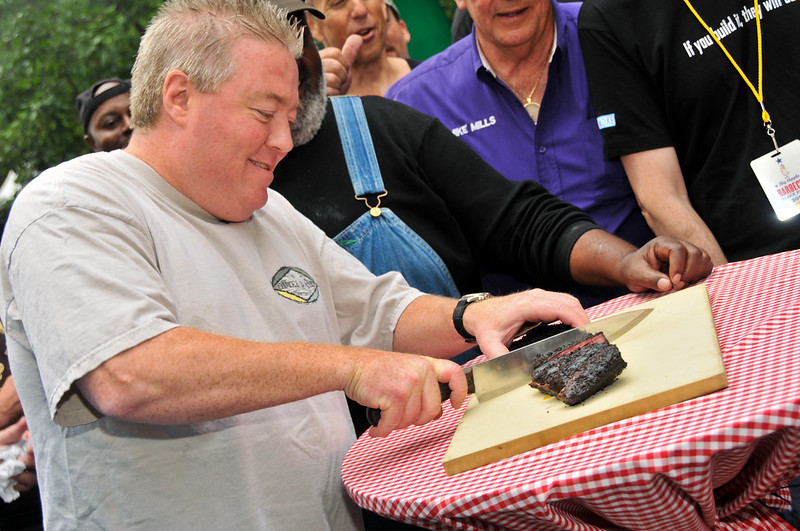 Then just before 11am on Saturday, the "rib-bon" cutting ushers in the official start of the event, followed by the ringing of the dinner bell. This honor is usually bestowed on Kenny Callaghan from Blue Smoke, which is part of Danny Meyer's Union Square Hospitality Group who make the Block Party happen year after year. 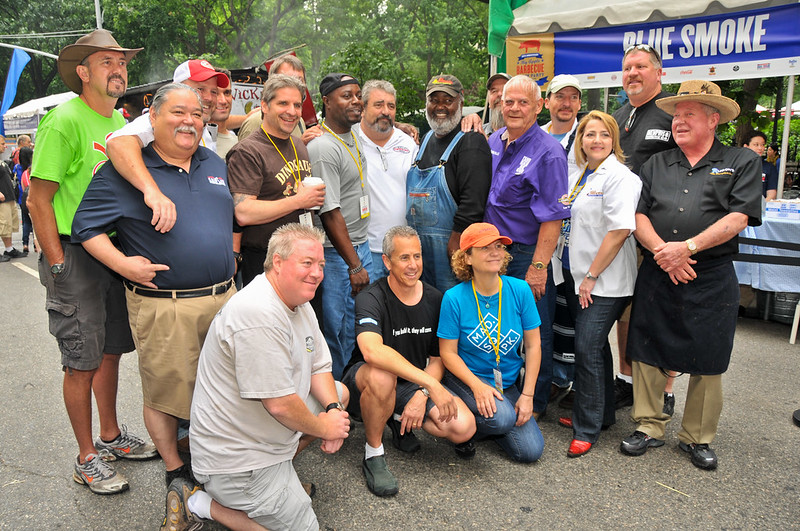 Over time the Block Party had found a standard cast of characters that return each year. This is really my only gripe with the event—the lack of new offerings each go round—but it's not much I can complain about with the vast talent represented. 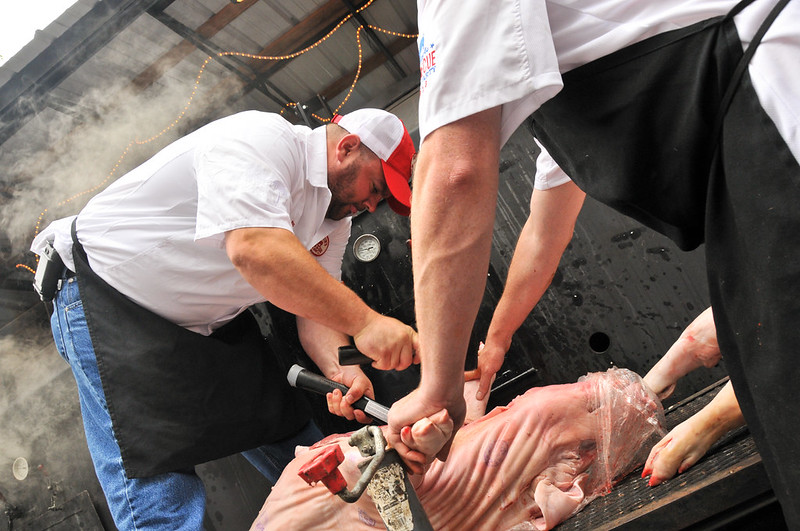 One of those is Pat Martin, who's been cooking whole hog for a few years now. I was lucky to catch a double hog delivery, where it took three men to lift these beasts up and butterfly them open with an ax and mallet. Then the exposed flesh got an extensive rub down and thrown into the smoker. 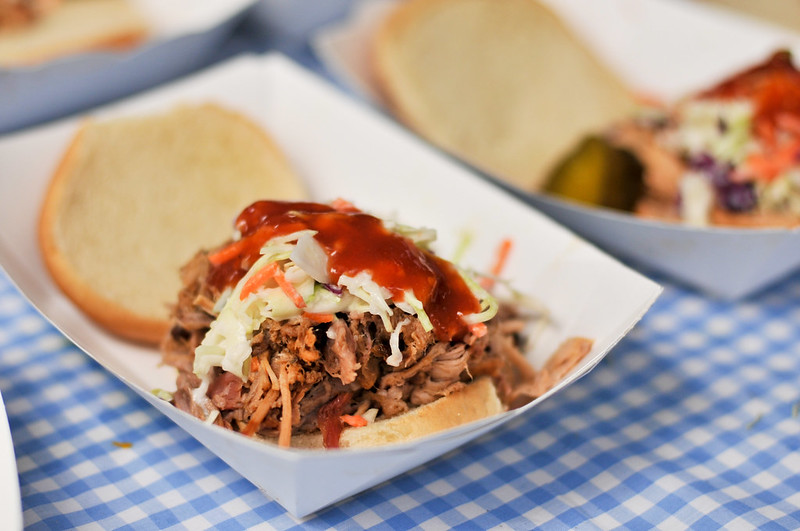 About half a day later it comes out as this, a masterful pork sandwich that's ooze juice and is incredibly porky. It's topped with some slaw and squirt of sauce, which is the only way you can get it at Martin's. 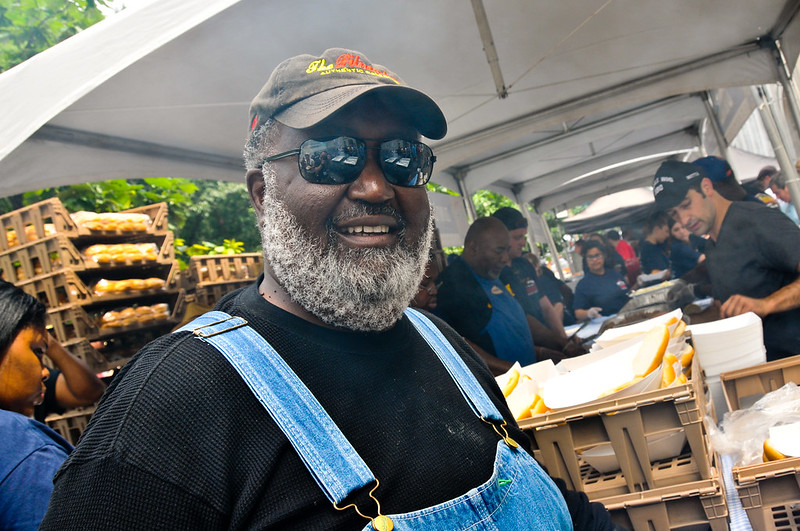 Ed Mitchell was a founding pitmaster at the Block Party, and the years of churning out immaculate whole hog has rightfully made him one of the most popular and most lusted after. 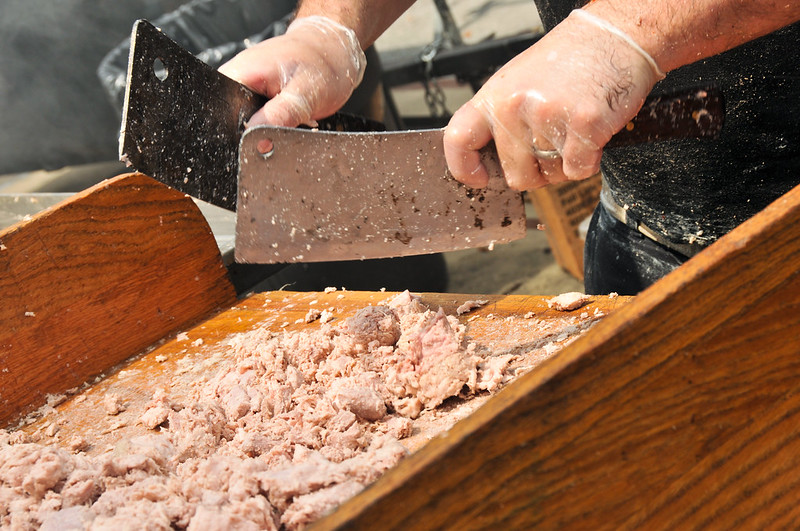 His warm personality and trademark overalls are part of the allure, but it's the vinegary and peppery chopped pork that really defines the man. Little bits of crisped skin are chopped into the meat to give it that little something special, as if the meat wasn't enough. 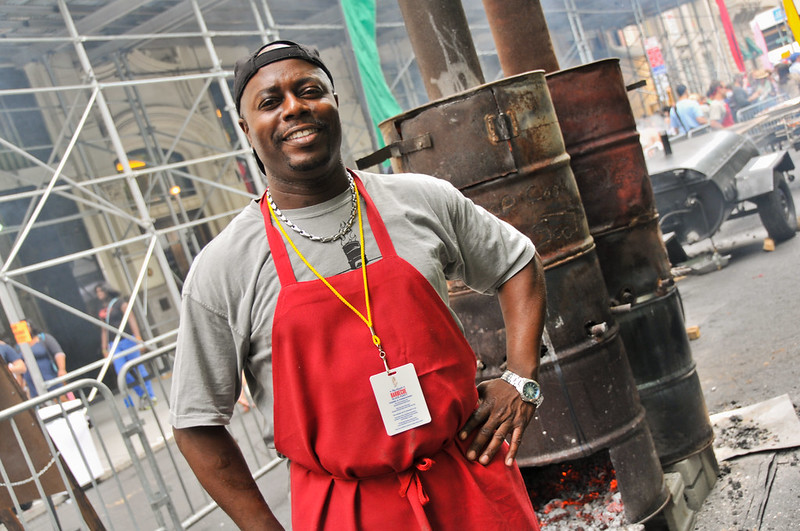 Rodney Scott was the lone new addition to the Block Party this year, and my cohort James at Serious Eats could not say enough great things about this man and his barbecue. 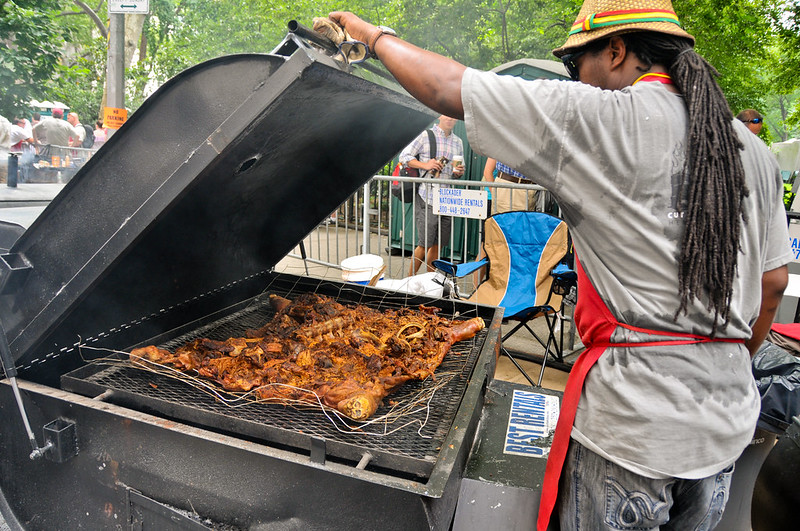 Rodney was cooking up whole hogs over wood he burnt down to coals in chimneys of his own industrious design. The pork itself was right on, but the real attraction was the spicy vinegar sauce it was doused in, having a unique blend of spices to make it stand out it in the crowd. 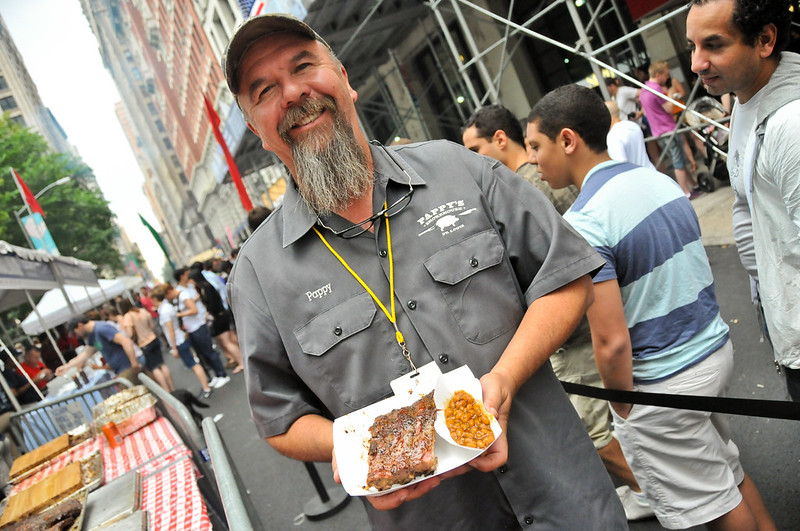 I don't think I took enough notice of Mike Emerson's, from Pappy's Smokehouse, baby backs in the past. He's been cooking for a few years now and I feel like I've always just had a bite of the rib and kept going. This year I went all in though, downing three ribs, and they were fantastic. 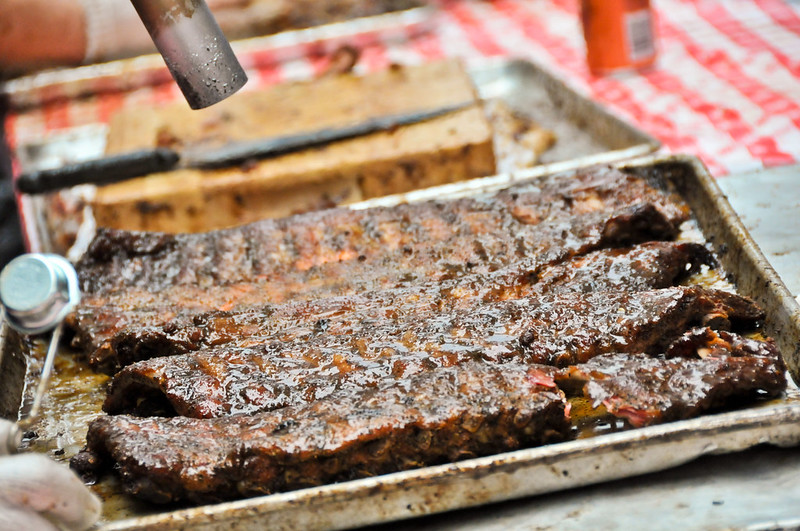 The brown sugar heavy rub is caramelized off the smoker with a blow torch. You might expect the glistening coat this creates to be overly sweet, but there's a great peppery kick to the ribs that balances the flavor. Against the perfect smoked meat, these bones are a force to be reckoned with. 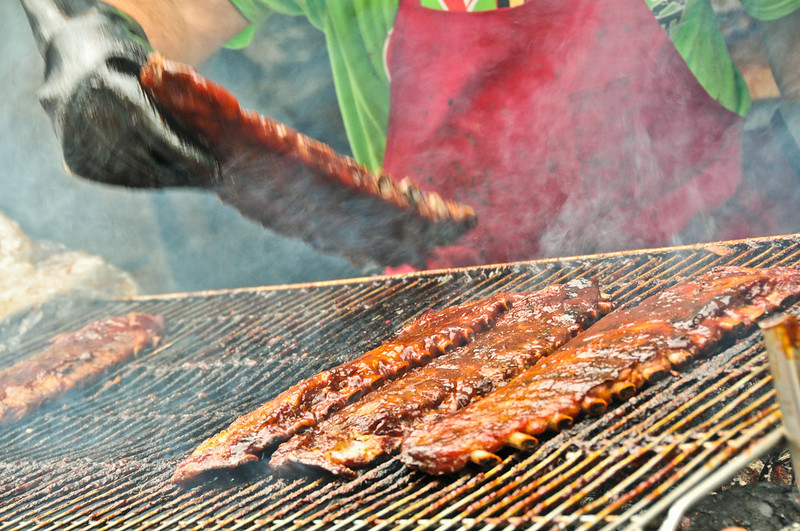 Another great rib that I feel doesn't get its due are done by the Checkered Pig's Tommy Houston. I first met Tommy at the Best in the West Nugget Rib Cook-off in Reno a few years ago, and was so happy to see him become a regular in the Block Party mix. It's been three times now I've enjoyed some of his St. Louis-cut ribs, and each time I'm reminded how well they're done—cooked with just the right amount of pull from the bone, with a spice rub and sauce that's mellow enough to allow the flavor of the pork shine through. 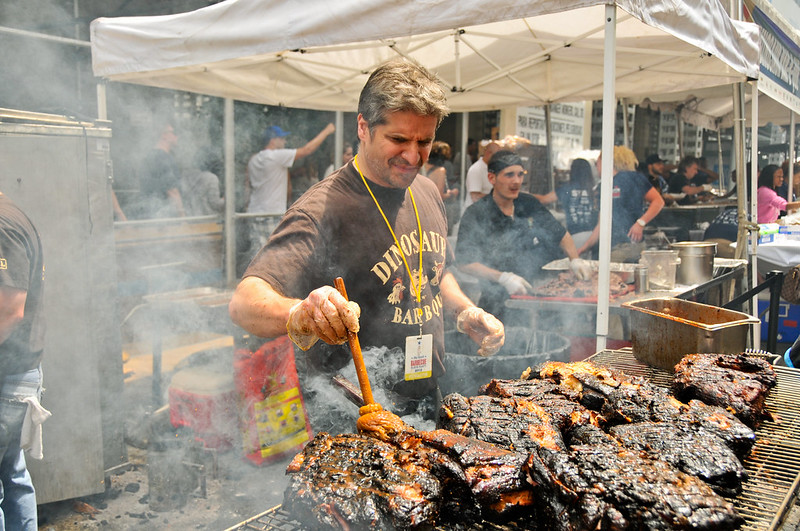 It's a common practice to skip the New York boys in favor of the more exotic barbecue from the strange world that exists outside of the five boroughs, but ignoring them is doing yourself a grave injustice. John Stage from Dinosaur BBQ consistently has some of the best pork shoulder you can get at the Block Party. I say it's also better than what you can get in the restaurant—I guess having the pitmaster himself there, tending to each glorious butt personally, makes a difference. 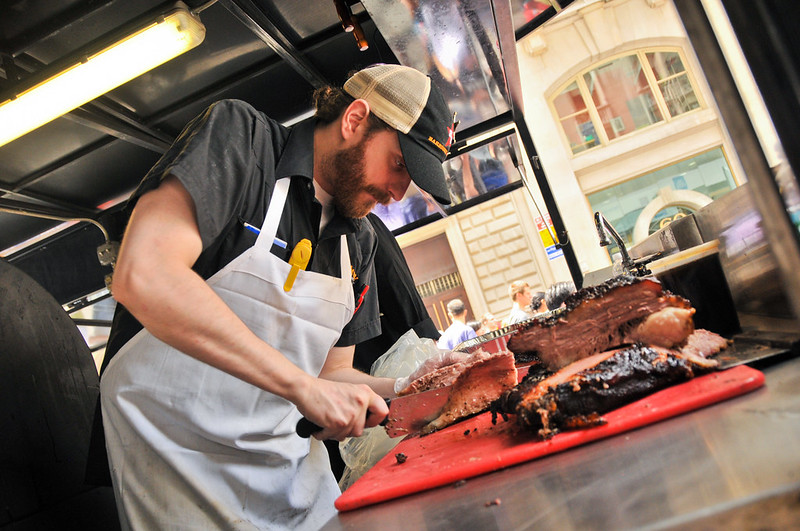 Hill Country is another great example of NYC doing things right. Everyone mobs the Salt Lick or Jack's Old South for brisket, but I'd put all my money on Hill Country having the hands down best brisket there. Moist and beefy, with a heavy salt and pepper bark, this is the brisket of the gods, only to be outdone by the true Texas establishments that dot the Hill Country landscape. 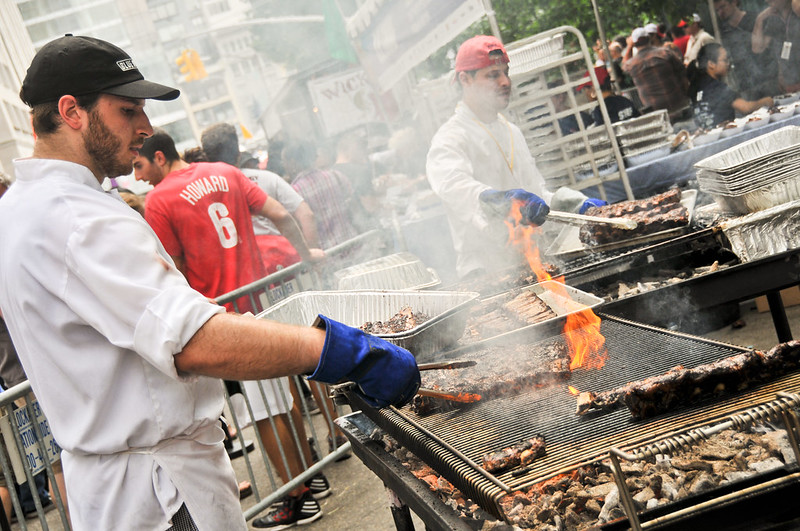 The Block Party once had a standard rotation of "the other meats" that has since fallen to the wayside. Snoots, mutton, brunswick stew, and more have been too far off the standard palate of a New Yorker to be sustained for more than one year. The only exception to this rule is Kenny Callaghan's salt and pepper beef ribs, which are just killer. I find these insanely rich and beefy ribs to be in the perfect serving size at the Block Party, finding the full order at the restaurant just a little too much to handle on my own. 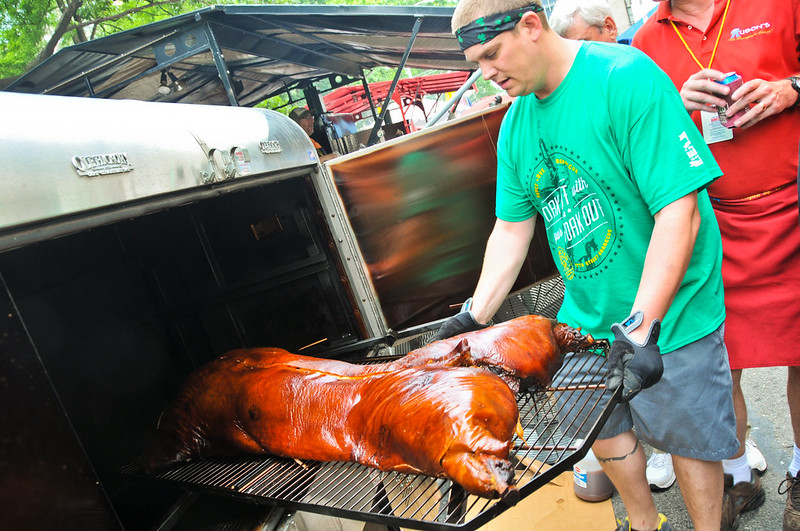 I've come to know Mike and Amy Mills from 17th Street Bar and Grill quite well now, and they are always the most gracious hosts. I spend a fair portion of the party plopped down in their tent, chowing down on rib after rib, but this year that had a nice surprise for their friends—a whole hog. 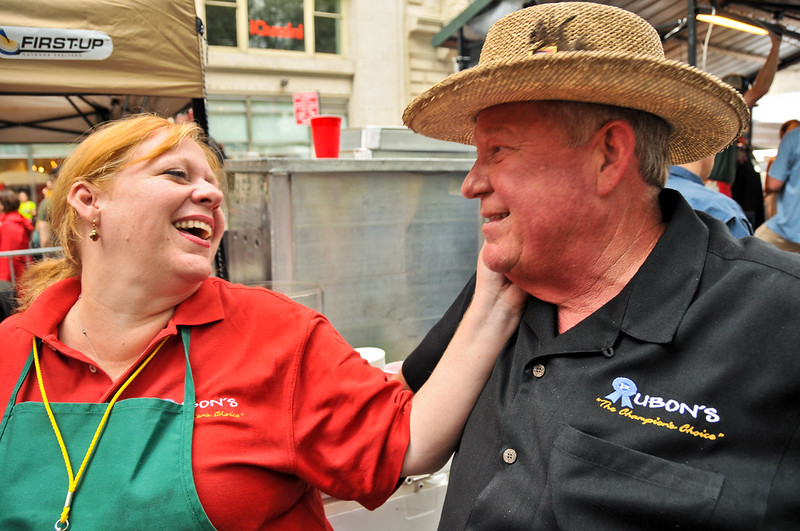 17th Street may be my Block Party home, but the warm family atmosphere created by Garry and Leslie Roark from Ubon's sets a high standard for friendliness at the Block Party. 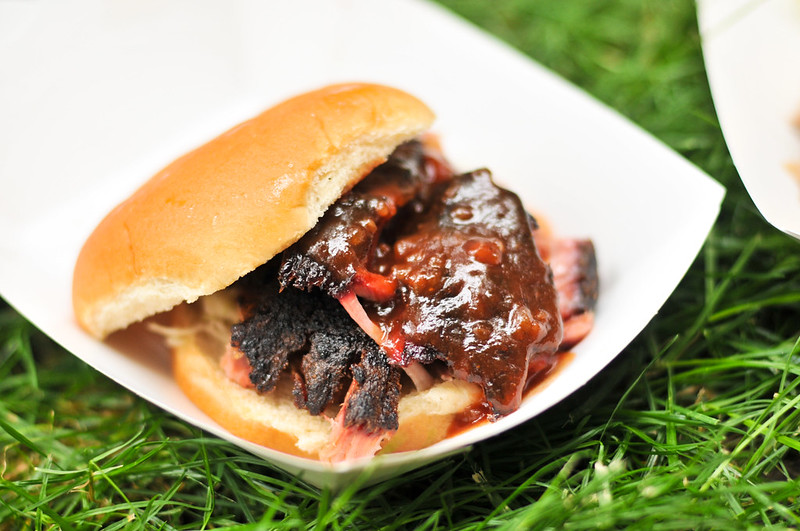 You can't walk away from them without being well fed, and this year we got an extra special sandwich comprised of juicy and crunchy bark pulled from a shoulder fresh off the pit. 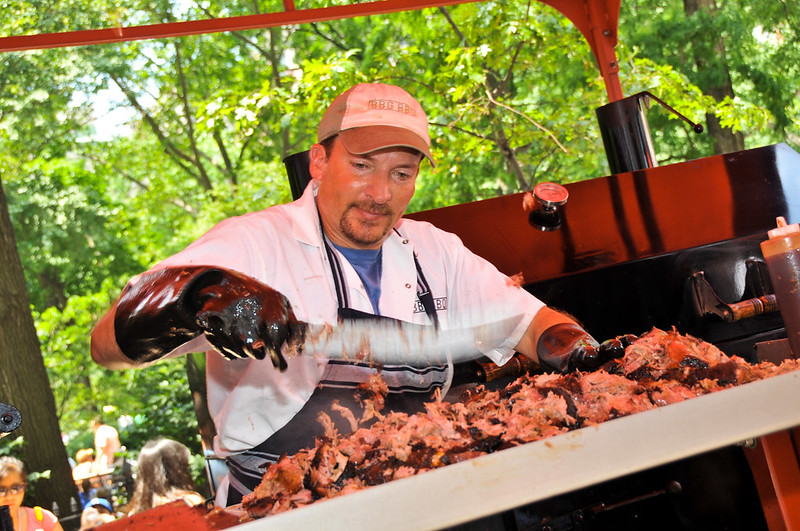 I think Chris Lily from Big Bob Gibson may win the prize for the craziest long line each year. A tireless, constant show of chopping pork wows the crowd, whose wonder is only further enticed as they take in a bite of the sandwich that strikes the perfect balances between smoke, pork, spice, and a vinegar tang. 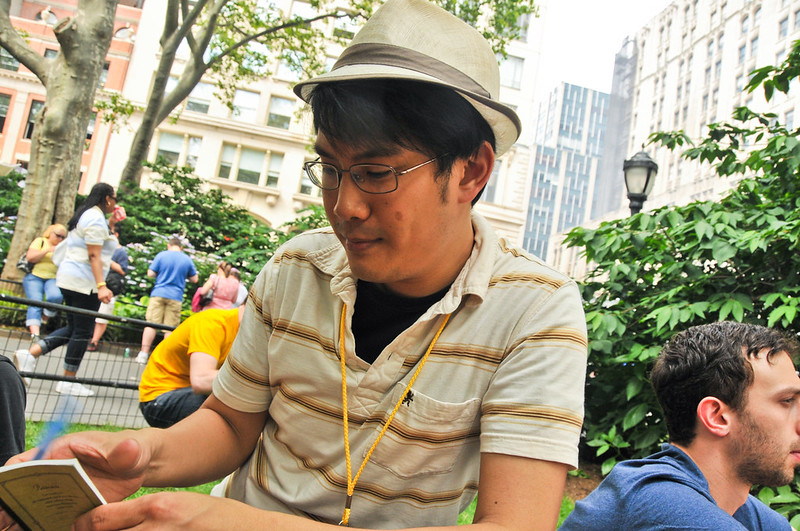 Of course I didn't eat my way through 17 pitmaster's offerings alone, most of the help came from this man here, James. He brought a can-do spirit this year, and had us getting through nearly every single meat within a five hour span, at tale that amazed everyone willing to listen to me gloat about this achievement. Without him, I would have never been able to conquer the Block Party as I have the past couple years, and for that I'm forever in his debt. 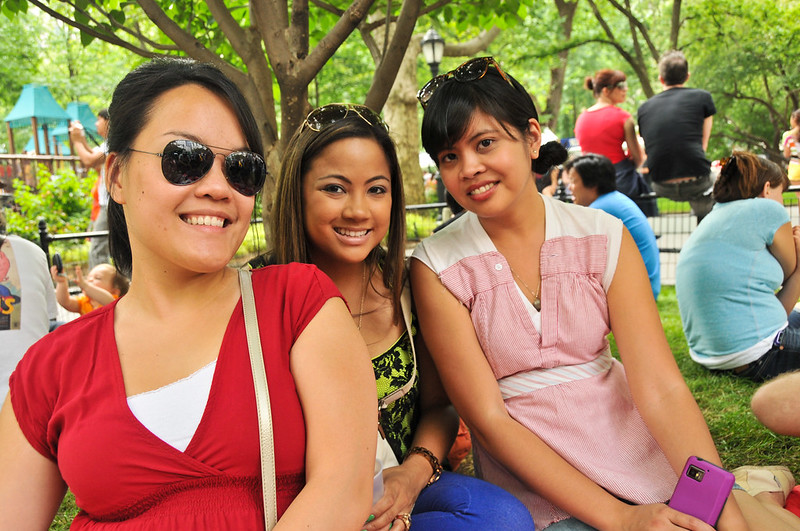 As always, I also bring along a sampling of Meatwavers who help with the hunting and gathering. This year we had Treyci and her friend, along with the wife, who's a great sport with all this barbecue madness. 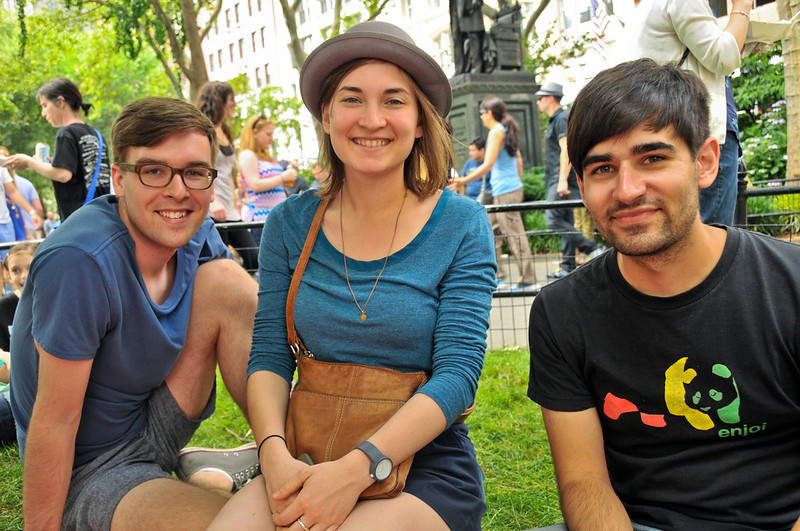 Then we had Chuck, who brought along his buddies Tyson and Kristen. I believe they were all first timers, so it was extra special to witness the happiness all the smoked meat brought to them. 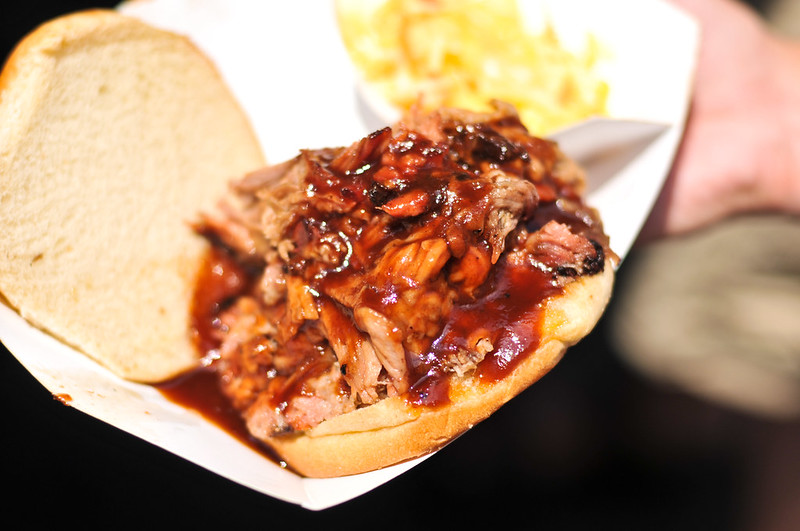 And with that, the 10th annual Big Apple BBQ Block Party is behind me. While there's a lingering reminder of the event by the extra pounds I packed on, those will soon fade and I'll be left only with only the found memories that another year of smoked meats and friends built, which is what barbecue is all about.