Can You Feel the Meat Tonight? 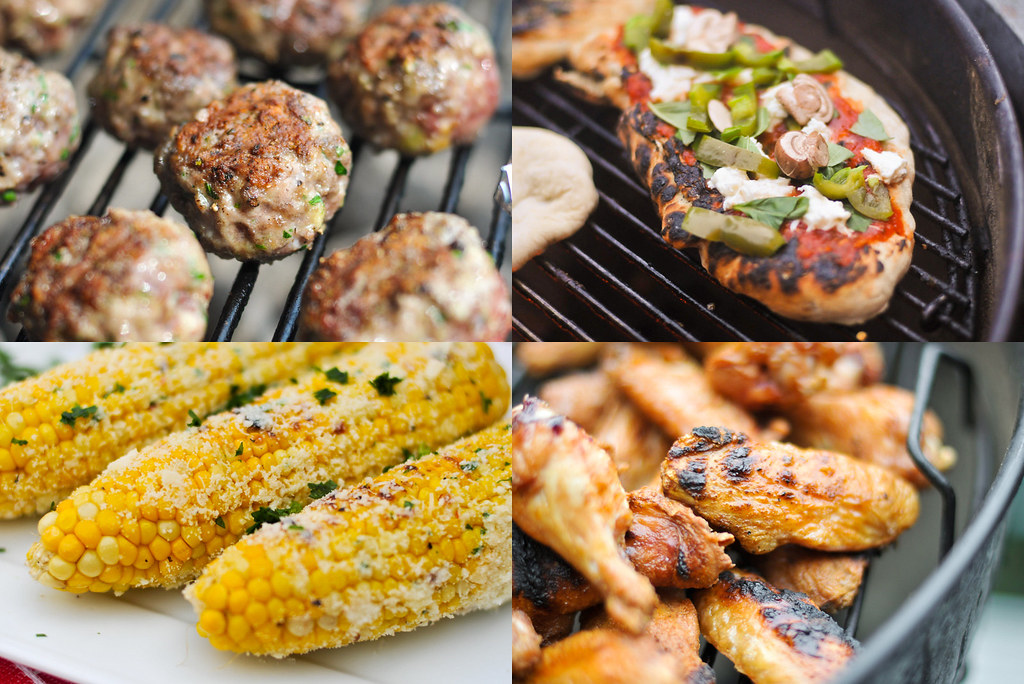 I'd been toying with the idea of moving the Meatwaves from Sunday to Saturday for a while now. I've had a few Saturdays thrown in the past seasons, and they always seemed more lively as people could throw loose without the prospect of an early morning call to the work week the next day. Of course, this change would deprive me of my usually important Saturday for prep, but this weekend I decided to take the plunge and make a mid-season switch to Saturday Meatwaves and see how it goes. Using the past Saturday as a base, I think it's going to be a really good thing, 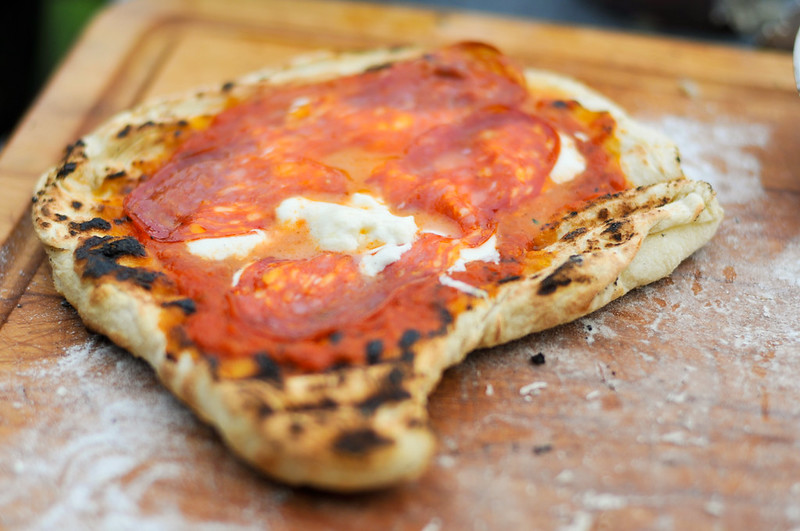 I always like to do pizza on the grill at least once a season. It's such a crowd pleaser and is ripe for creativity as I called for my meaty minions to bring their own toppings and impress us all with works of culinary art. I made 3 batches of dough, which we exhausted by the end of the night with nearly 18 different pies. Above you'll see me being my boring, yet delicious, self with a favorite combo of mine, fresh mozzarella and hot sopressata. 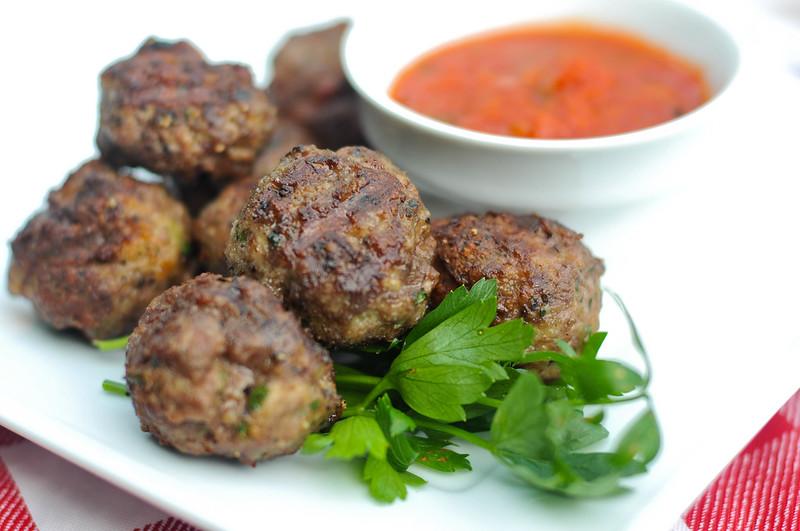 Ever since the Meat-a-thon last year where Joe made superb cheese-laden meatballs, I've had it on my short list of things that I needed to develop a recipe for myself. I finally got around to doing it this weekend with these meatballs that consisted mainly of beef, pork, Pecorino Romano, and Parmesan. I can't remember well enough to figure out if I topped Joe (ok, that was part of my motivation), but these were every bit as delicious as I recalled those being a year ago. 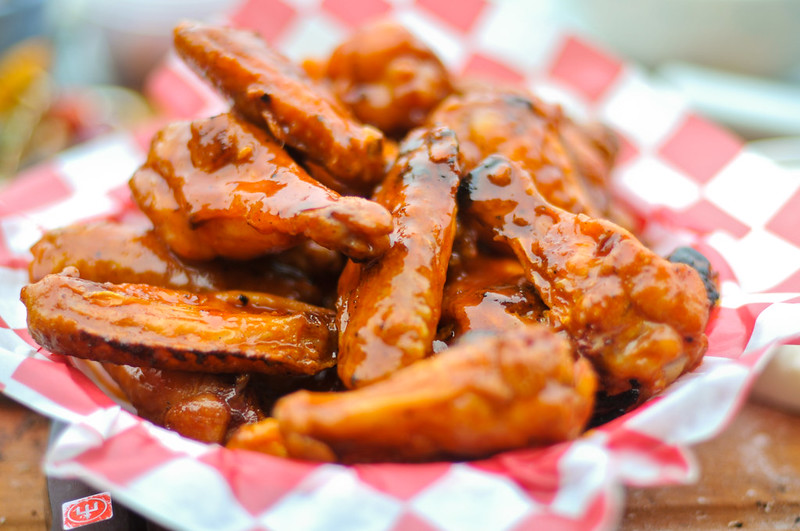 What's pizza without wings? The two go hand-in-hand in my book, so when I saw a plethora of good quality wings at the grocery on Friday night, I nabbed a couple packages and gave them my ultimate grilled wings treatment. These disappeared faster than I imagined, but I still managed to stuff my face with an unhealthy amount of these tangy and spicy beauties. 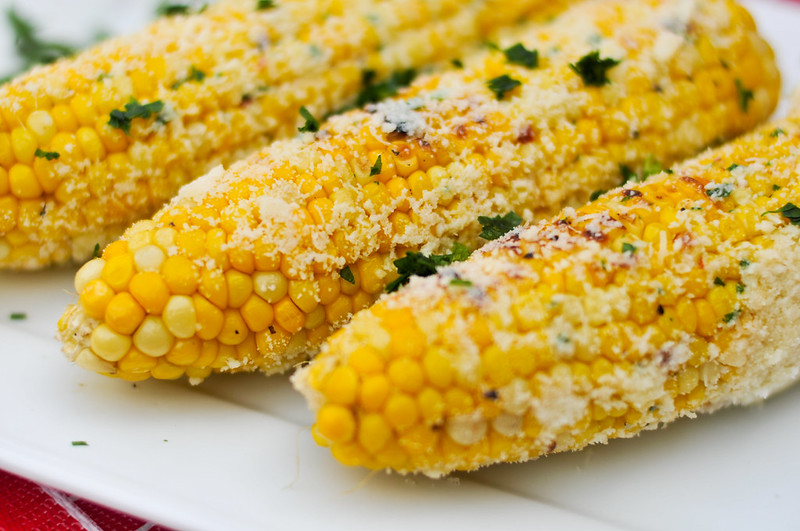 Now that corn is in season, we'll be seeing it a lot at the Meatwave. Sticking with the Italian theme, I gave them a Italian-inspired finish. After being grilled, they were spread with a spicy garlic butter, then rolled in a mixture of Parmesan and Pecorino cheeses—it was an incredible combo of flavors. 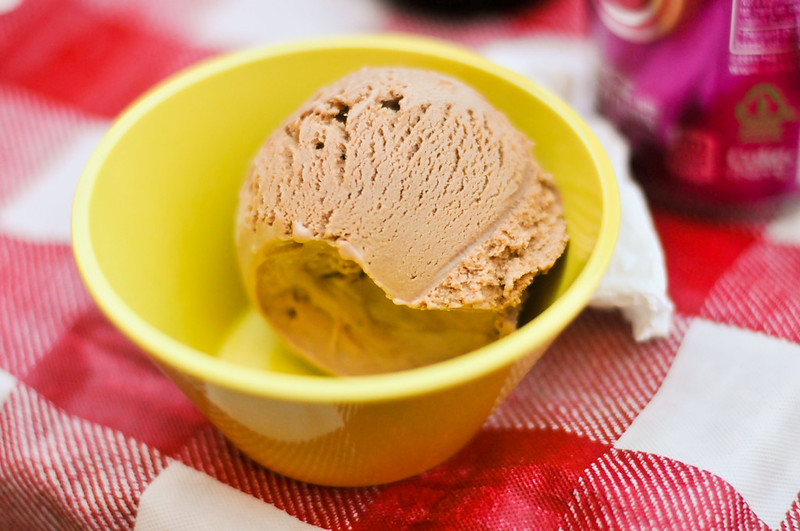 For dessert, I just had to do gelato, and what could be better than Nutella as a flavor for this meal? Silky smooth and not too sweet, I could definitely taste the difference milk made instead of my usual half-and-half to make this gelato, and I really liked the lighter texture and flavor I got. There may be many more gelatos in my future. 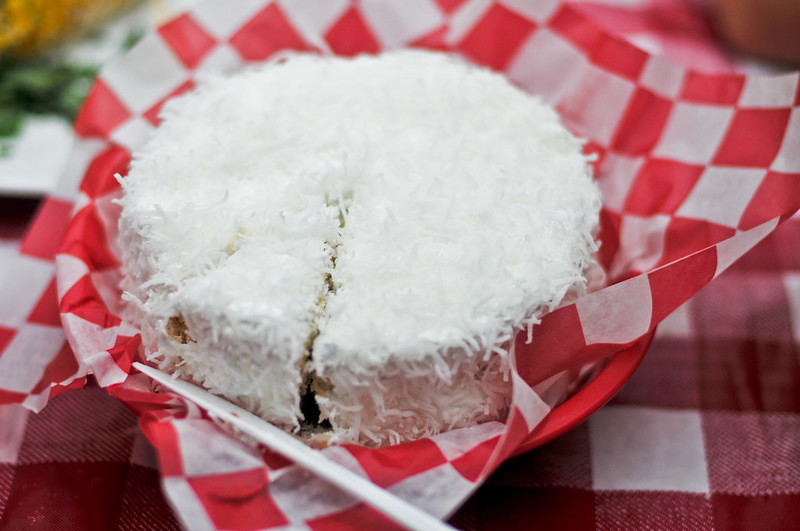 Lindsay is always astounding us with her ever expanding baking skills, out doing herself this week with a coconut cake with a raspberry center. 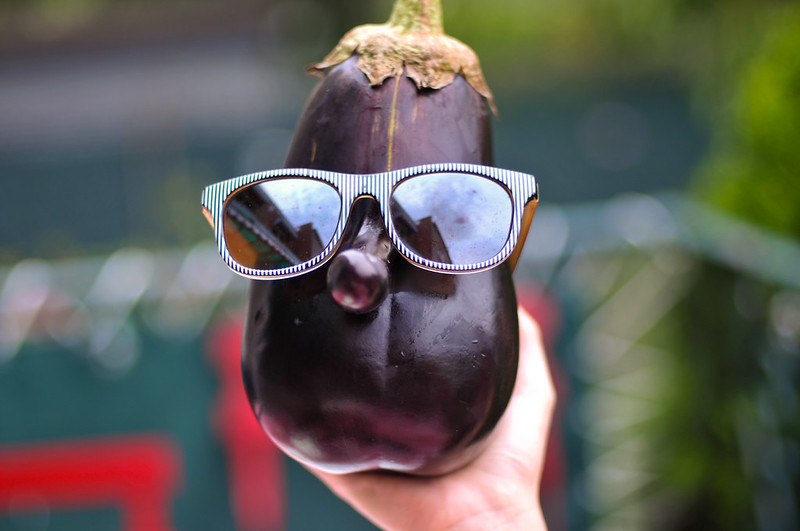 Meet the newest addition to the Meatwave family. Chris found this nosey (or well-endowed, depending on how you look at it) eggplant at the neighborhood Key Food and he quickly stole our hearts. We could not bring ourselves grill him, as was Chris's original intention, so he's sitting in my kitchen now as we think of a way to preserve him. He also remains nameless, anyone have some suggestions? 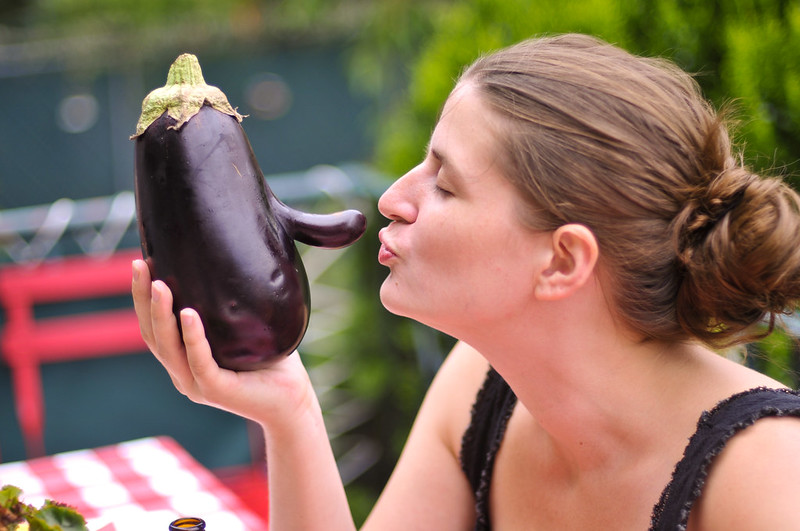 Watch out Brandon, there's a new man in town and he's making moves on your lady! Maybe your lady is making moves on him, either way, this is an eggplant on a mission and I wouldn't turn your back on those two for a minute. 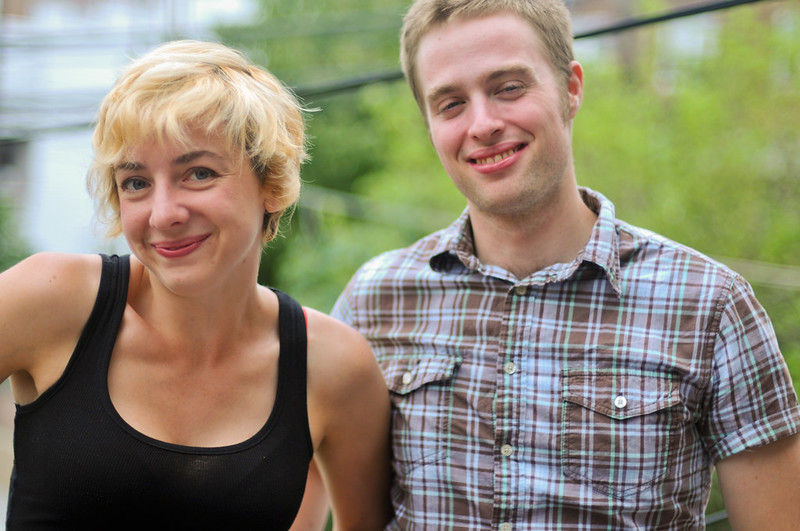 We welcomed a whole host of new Meatwavers this weekend. My partner in barbecue crime over at Serious Eat, James, rolled in with a big crew, only to hit the road again pretty quickly, so fast I forgot to snap a photo. Then we also have Anna and Joe above, who were just a joy to have around and we hope to have back soon. 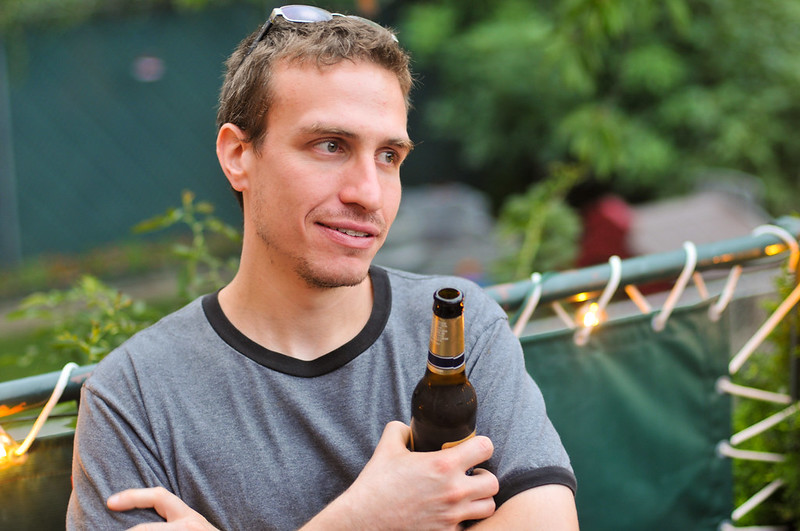 This week saw Peter crawl out of the hole his work has dug for him and start living the meaty life once again. My oldest and closest friend, I was super excited to have him back in the arms of the Meatwave. 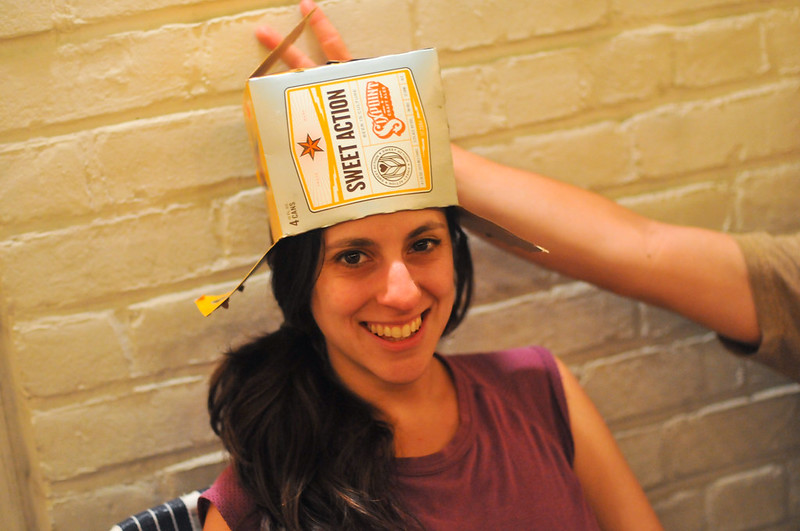 As I predicted, a Saturday Meatwave lent itself to a late night (hence the name, Can You Feel the Meat Tonight?). So what happens when a group of good friends are filled with meat and booze, well, this for starts. The remnants of a late-day beer run (I think this is the first time we ran out of beer) became the latest fashion craze, and nobody can wear a beer box like Amy. 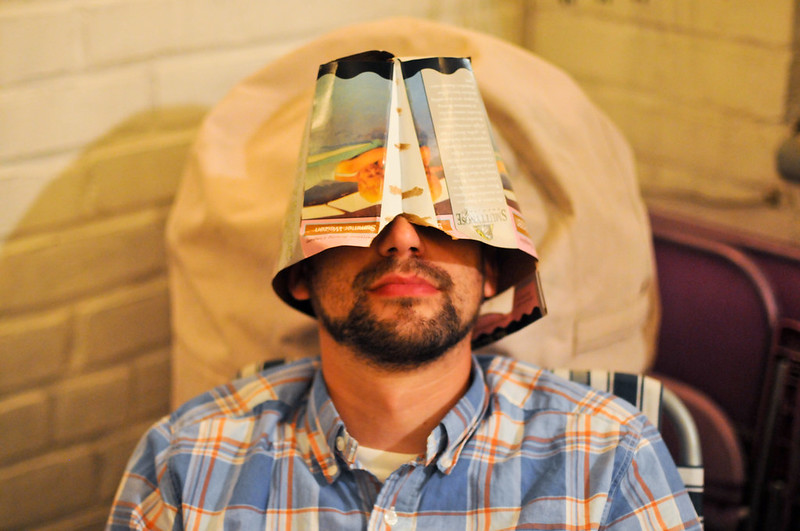 Mike tried, but failed to some extent, or he may have been catching some shut eye, as it was already around 10pm by now. Going well into the night, I really loved the feel of the Saturday Meatwave where we ate more, drank more, and had an overall more relaxed feel. I didn't even miss my Saturday prep day, as I've now found having Sunday free gives me better time to peruse the other, literary, half of the Meatwave equation that helps bring all the greatness to your computer boxes.