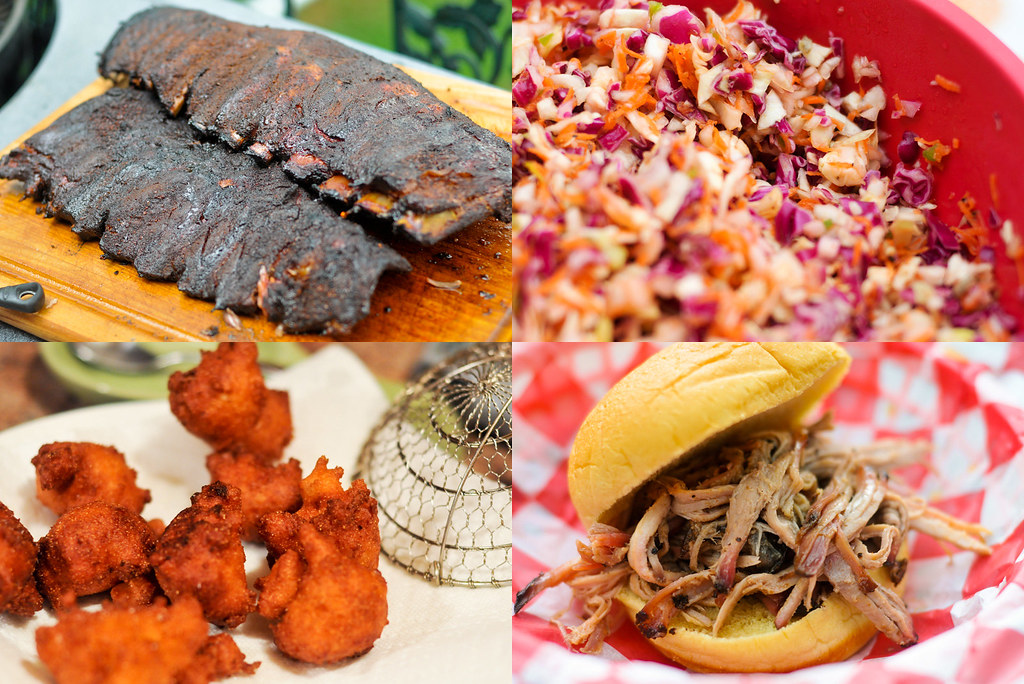 Oh glory of glories, it's Carne-val time once again, the celebration of everything that is meat! While last year's feast focused on many varieties of meat, this year honed in on the swine, and a lot of it. A whopping 27 pounds of raw hog—divided equally between ribs and butts—went into the smoker and emerged many hours later as some of finest barbecue one can find (at least around these city parts). Despite some rainfall, most made it out to revel in the meat and make this year's Carne-val fantastic. 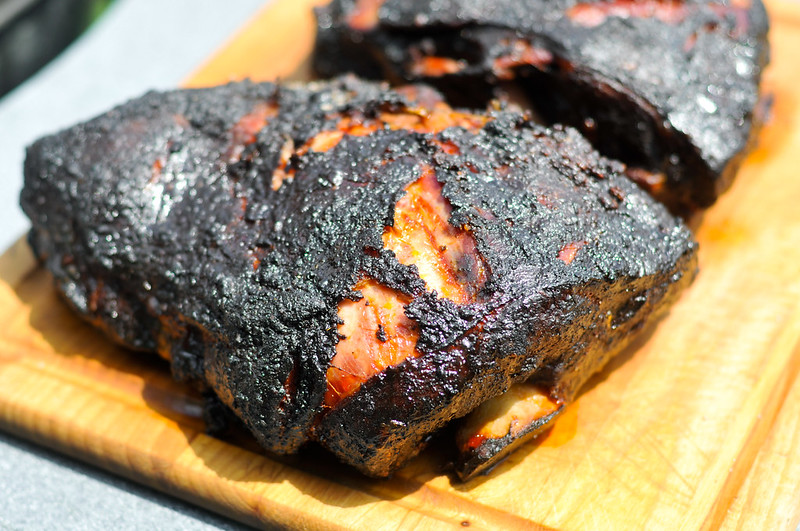 The piece de resistance were these two luscious pork butts. Given the Big Bob Gibson pre-game of a liquid injection and a sweet rub, they were then smoked for 16 hours over oak and apple and basted with a vinegar mop during the process. I didn't think I could out do my usual pulled pork, but Chris Lilly knows his way around a pork shoulder, and his recipe elevated my pork to new heights. 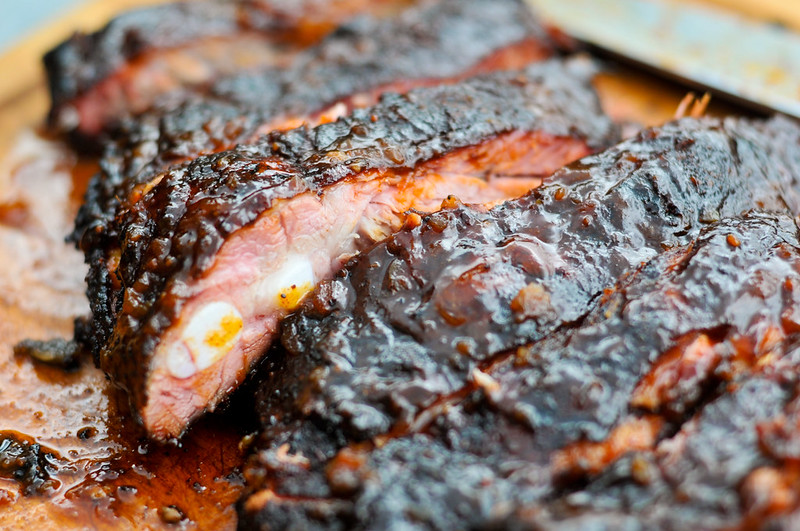 When it came to the ribs, I had to make a decision whether to finally start developing my own "secret" recipe or go with the reliable stand-by of the Apple City recipe. With four racks on the line and almost twenty mouths to feed, I thought it best to stick with what I knew, and what a good decision that was. Awesome as always, this ribs are made to impress, which is exactly what they did. 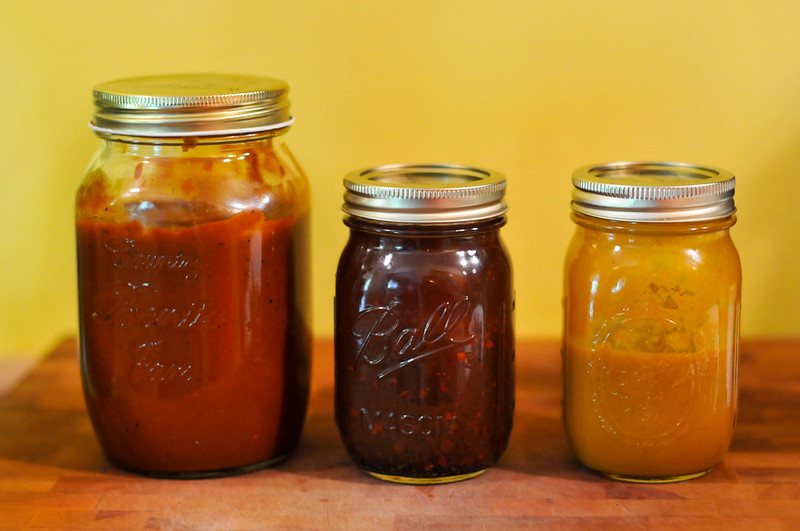 To accompany the meats, I concocted three choices of sauce: a tomato sauce, North Carolina vinegar sauce, and South Carolina mustard sauce. While vinegar was prized by me and a North Carolina ex-pat, most everybody else (yes, we're Northerners) gravitated to the tomato sauce, which was really more like the most delicious barbecue ketchup ever. 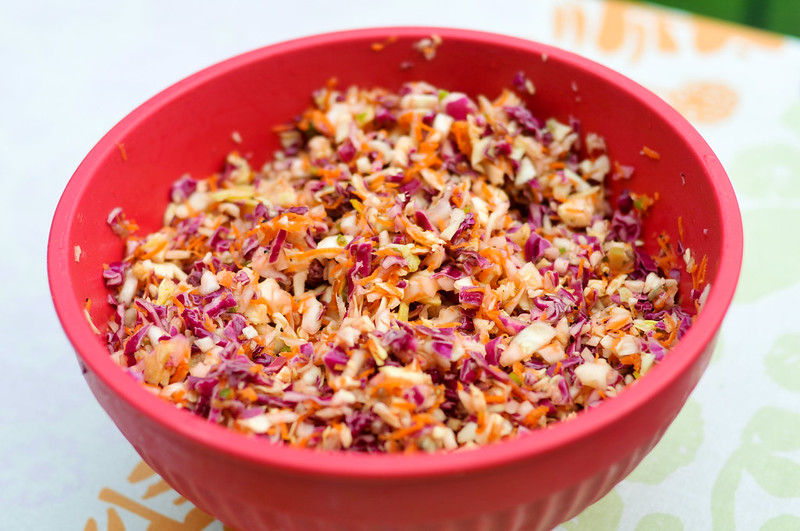 With barbecue, there must be sides. With pulled pork, there must be coleslaw. None of that mayo-laden cabbage for me, thank you. I put together a vinegar slaw that topped many a pulled pork sandwich with flavors that were a match made in heaven. 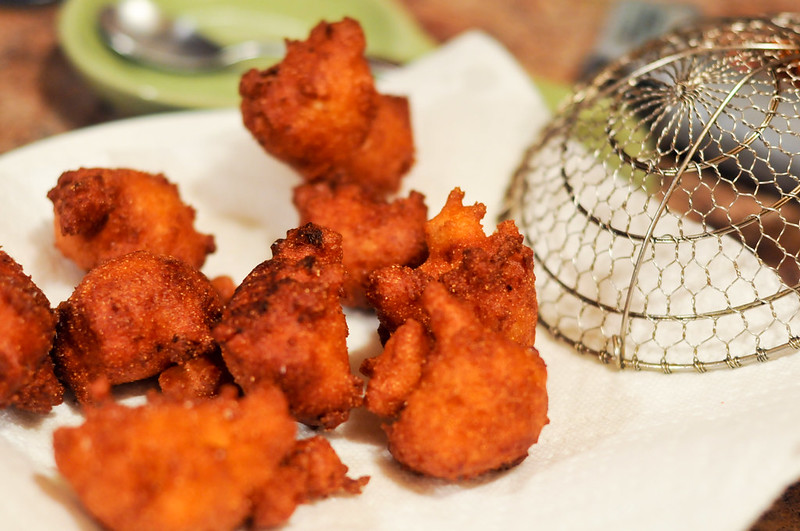 Continuing on a NC kick, I thought it was about time I heated up some fat and tried my hand at hush puppies. Light, moist, and flavorful, I was pleased with the effort, and the empty plate at the end showed most Meatwavers were in agreement, but really, can you screw up fried bread? My little secret that made them extra tasty...a little bacon fat to go with the rest of the oil. 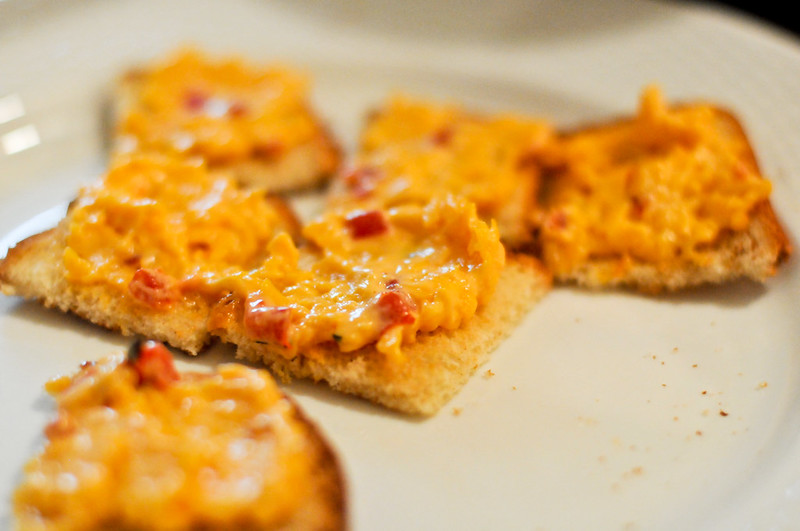 After getting a recipe for some excellent pimento cheese at this year's Big Apple Barbecue Block Party, the wife has been itching to find the right time to make it, and that time had come. The spread made of cheddar, mayo, pimentos, and a little hot sauce reminds her so much of the homestead back in Houston that it's a good thing she made enough for leftovers—she's currently reliving those childhood memories every night. 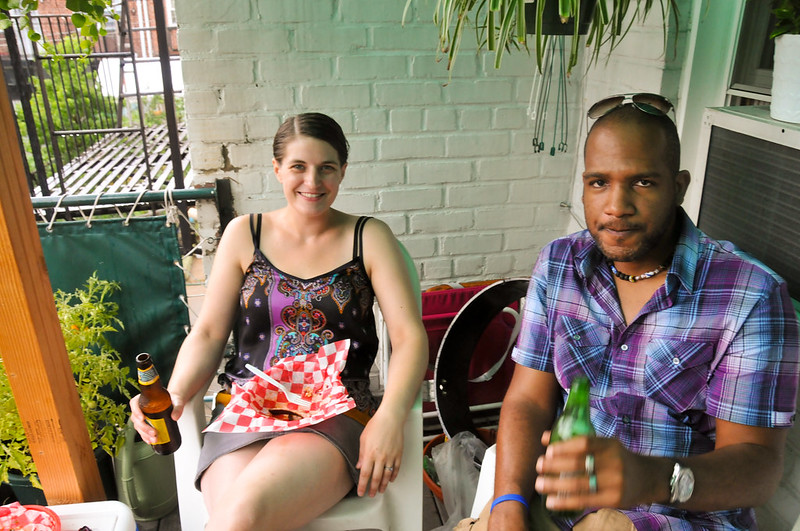 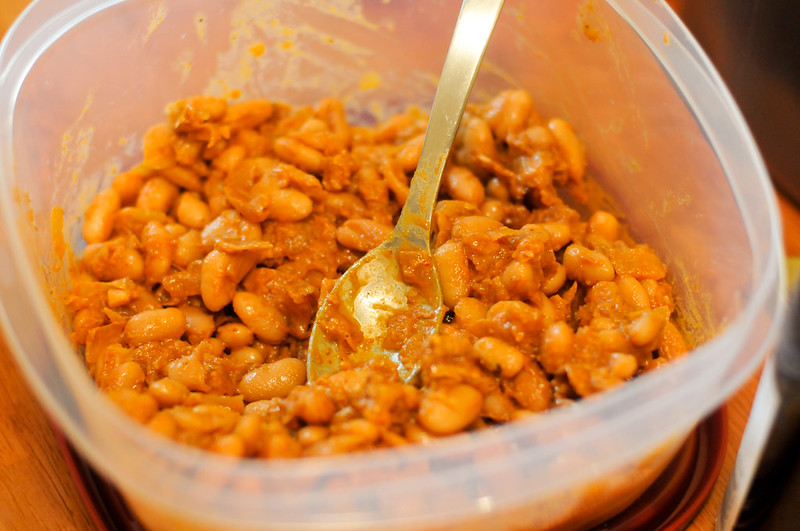 Lindsay has taken the title of Super Meatwaver this year! Almost always present and accounted for, she also never fails to bring something yummy for all to eat. This time it was root-beer beans. Beans and barbecue, can't go wrong there, but for a twist, these were served cold, which was quite refreshing on such a hot day filled with mostly hot foods. 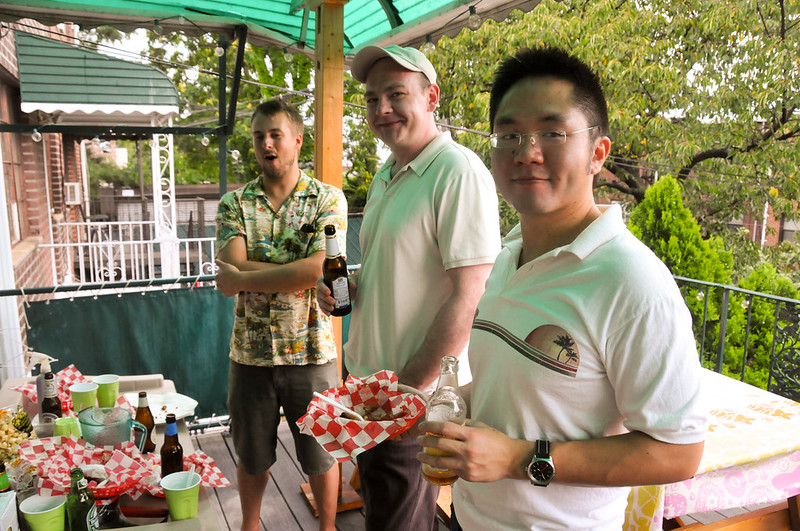 In the past, Chris could have been considered a Super Meatwaver himself, but other obligations have been holding him down this year. Last time he brought the awesomeness of holding a conference call mid-Meatwave, this time he informed me he wouldn't be able to make it, then showed up like magic. The rain canceling his bocce game could have accounted for that, but I say it was the irresistible draw of the meat. 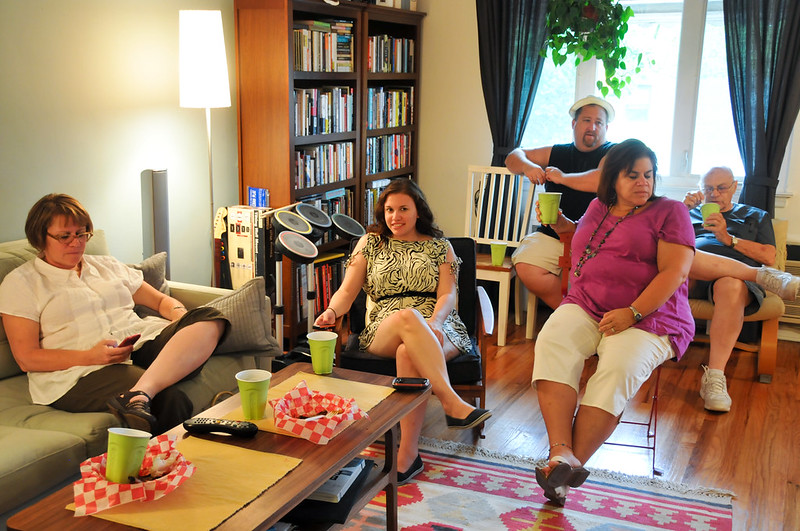 Carne-val was actually looking like it was going to be mostly a family affair, with my Mom, Poppy, aunts, uncles, and cousins all making it out. Unfortunately traffic kept some at home, then the rain segregated the Meatwave into family inside and friends outside, huddled under the awning. Although not the meatopia I had imagined, I'm happy some of my family got to partake in the meat and hope a time will come when ribs align and everyone can all come together. 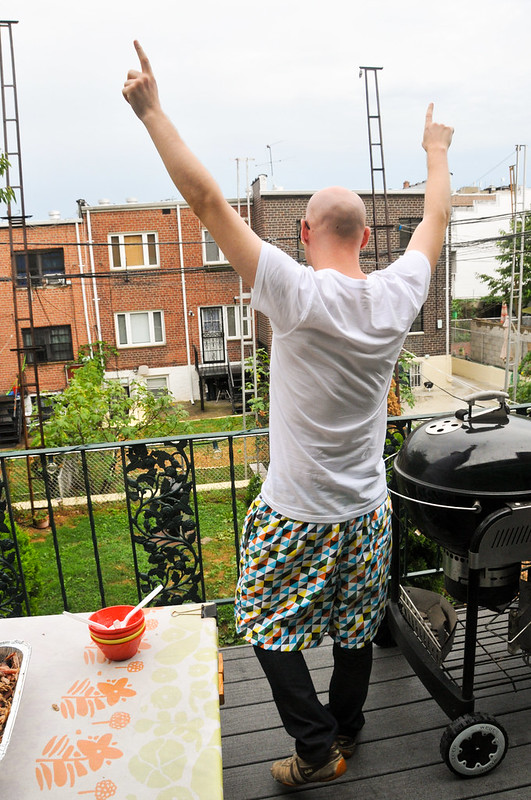 I'll leave you with Gunny, showing off his insane over-sized swim trunks, procured in Bay Ridge, while triumphantly celebrating. The sad part of this photo is he's not celebrating the meat at Carne-val—he is still a (misguided) vegetarian. As we talked about this roadblock in his life, I realized I like to take credit for converting three people into full on carnivores, and am taking on the challenge of making Gunny my fourth. He asked, "How would I explain 16 years of vegetarianism suddenly gone?" That's an easy answer, just tell them the Meatwave got you! Everyone would understand.