Can You Handle the Meat? 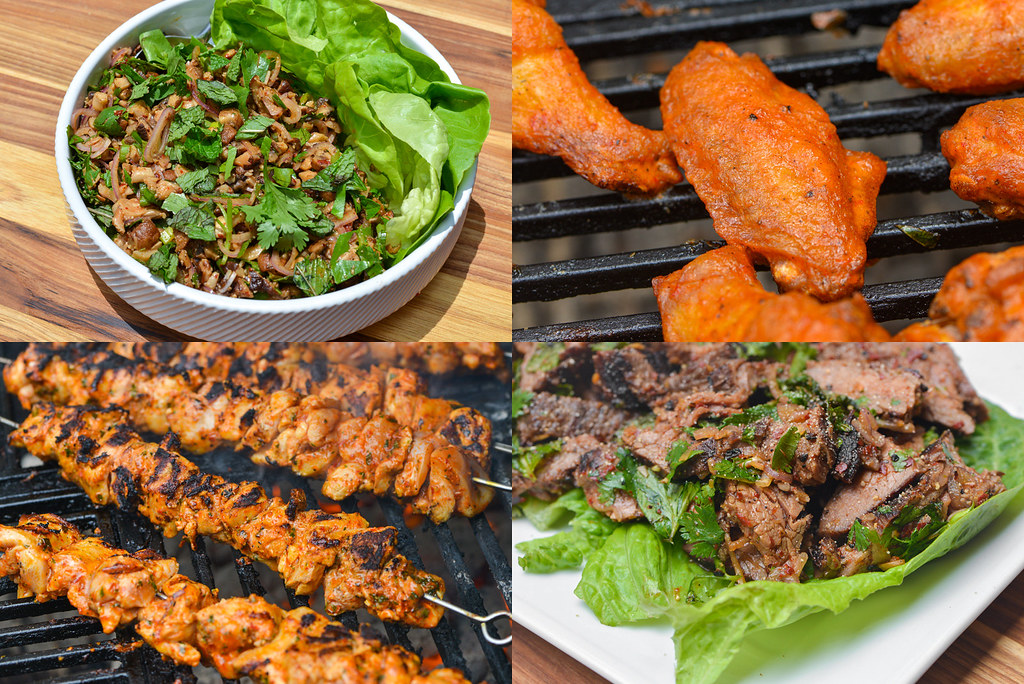 If there was ever a Meatwave designed solely for me, this might have been it. Can You Handle the Meat? was created to be a menu filled with spicy foods, and I really love spicy things. I have a few common complaints about eating and North Carolina, and one of those is that nothing is spicy enough—it's like all restaurants figure that since a lot of folks around here don't handle spicy well, then no one gets that wave of heat experience. It's kind of maddening to me, and there are so many foods that just don't taste right because they're missing that kick. So this menu grew out of that frustration and got me my ideal tastes of a lot of different dishes that are close to my heart. 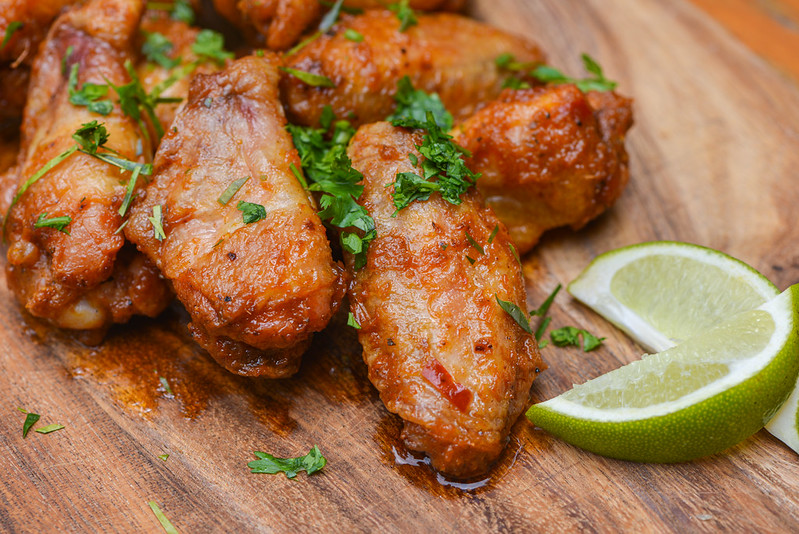 A lot of my bitching about things not being spicy enough are a result of sup par Thai food here in the Triangle. It's not just the heat that's missing, but the entire range and depth of flavors I got used to in New York, and experienced even better in Thailand. So the menu did slant heavily toward Thai cuisine, with all dishes built up from scratch with their proper ingredients. That started with these red curry wings, where a lot of effort went into creating the curry paste by hand in a mortar and pestle, utilizing both puya and bird's eye chilies for the heat. I transformed that paste into a wing sauce using some butter and coconut milk, and these turned out excellent with the full spectrum of flavors they deserve along with that nice kick of heat. 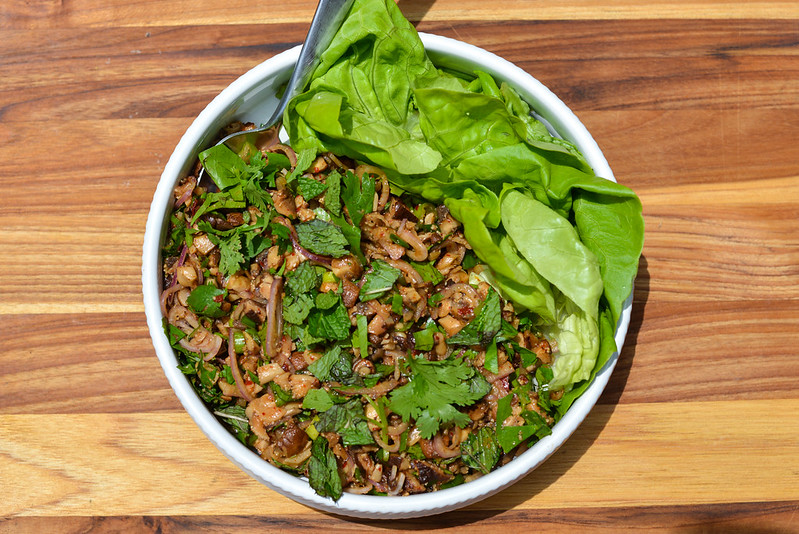 Next we have a Thai mushroom larb. I put this together by grilling a lot of different mushrooms varieties, then chopping them up and dressing them with sauce made from a vegetarian fish sauce, lime juice, toasted and ground puya chilies, and a little palm sugar for balance. Also in the mix were shallots, mint, cilantro, culantro, makrut lime leaves, and toasted rice powder. I served the larb with lettuce for making wraps, which balanced out the heat from the sauce quite nicely. 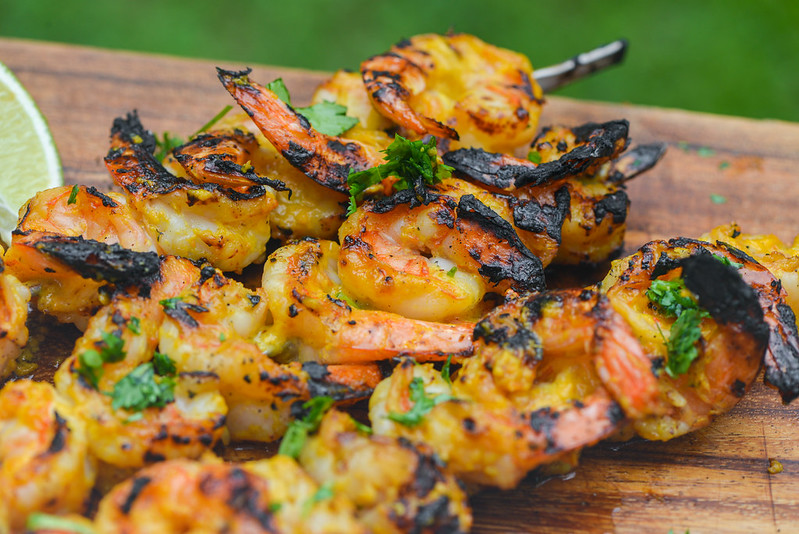 These mango-habanero shrimp were part of a new effort to cook more seafood. Instead of continuing with the Thai-influences, this steered a little more towards Indian cuisine with garam masala, garlic, and ginger doing part of the seasoning work on top of the fresh mangos and plenty of fruity and fiery habaneros. The marinade sure made for some mighty tasty shrimps where the sweet meat was a perfect match for the fruity and spicy flavor profile. 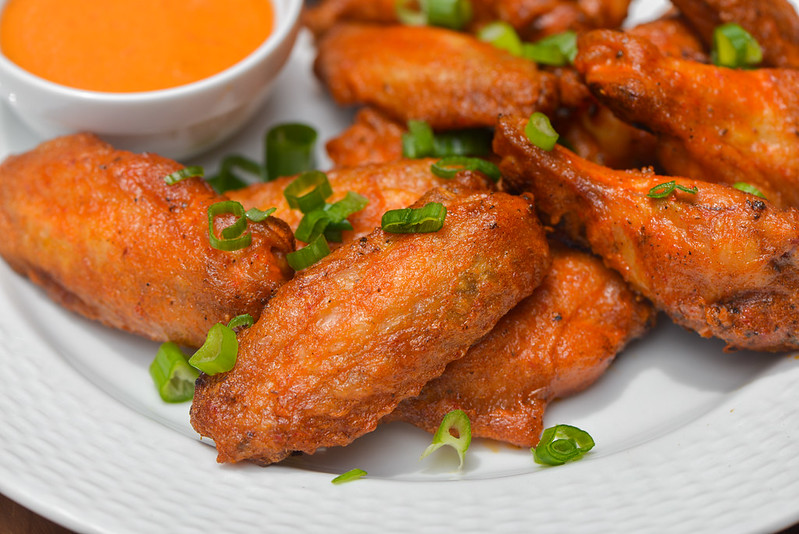 Piri piri wings have been on my perpetual to-do list, and it felt right to have two wing offerings at a spicy foods Meatwave, so I tried them out. These were the less spicy of the two wings, but a fair amount of hot fresno chilies went into the making of the piri piri sauce, but the other additions of roasted bell pepper, onion, lemon juice, and vinegar helped keep this sauce from being too hot. Instead you got a really bright and tangy flavor with just enough spice to tingle your tongue. 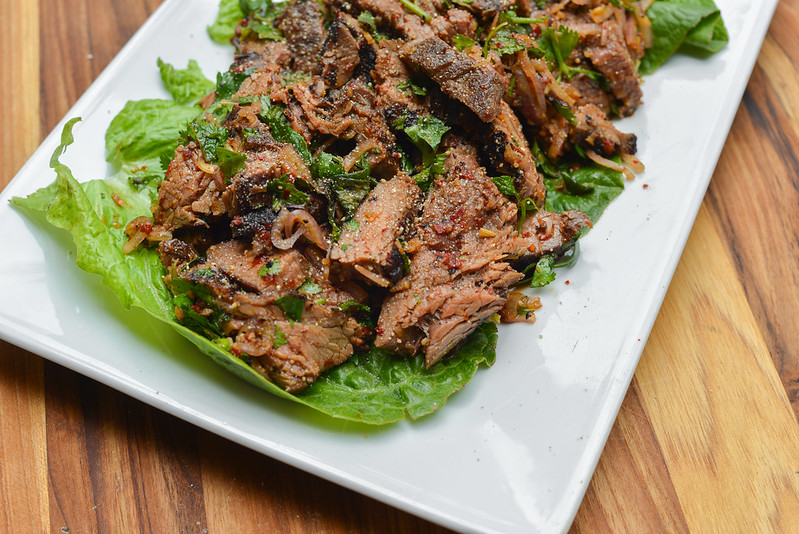 Now back to Thai with nom tok, otherwise known as beef waterfall salad. This is one of my favorite things to order at Thai restaurants because it's, at the same time, hearty and refreshing with its bright citrus dressing that's also super savory thanks to fish sauce and nicely spicy from toasted chili powder. It's not just me who loved this salad, I had a couple guests tell me how good it was, and I had to let them know that, while you can get this at any local Thai joint, it won't have the depth of flavor or punch of heat this version had. 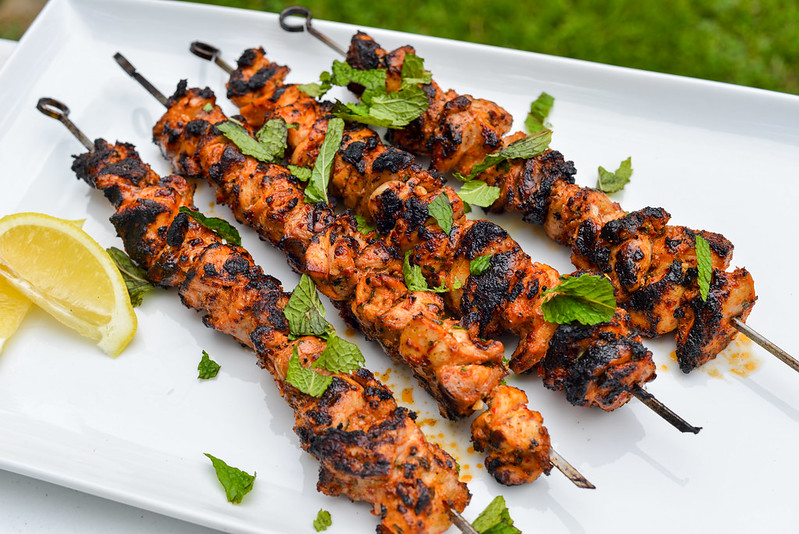 I did worry that many of the dishes might be too hot for some guests, so added these Aleppo pepper and mint chicken skewers as a milder option, although still very chili focused. Aleppo pepper is great stuff—it's kind of like the red pepper flakes you can pick up anywhere, if they had a lot more flavor. It worked great in the marinade too, adding a mellow heat to a lemony sauce that gave the chicken immense flavor. 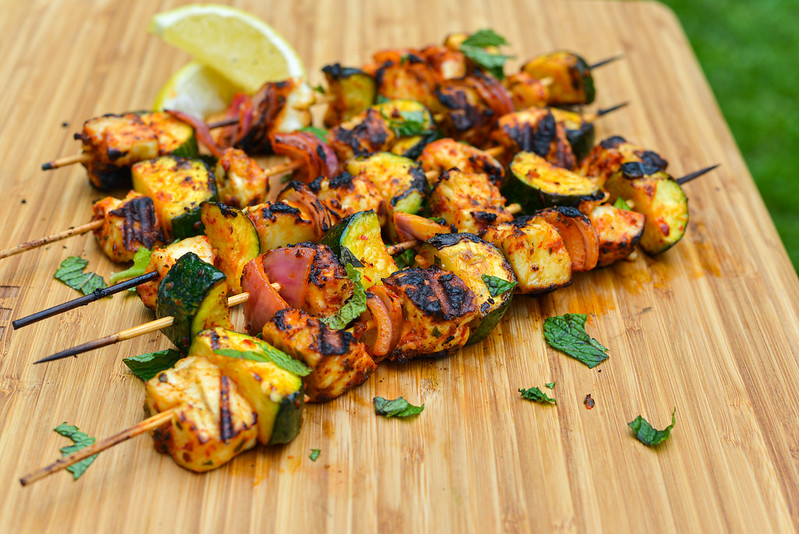 It also did magic with veggies and cheese in this meatless version I also put together. I made no adjustments to the marinade, but instead used it on zucchini, red onion, and halloumi to make kebabs that everyone seemed to like even better than the chicken variation. 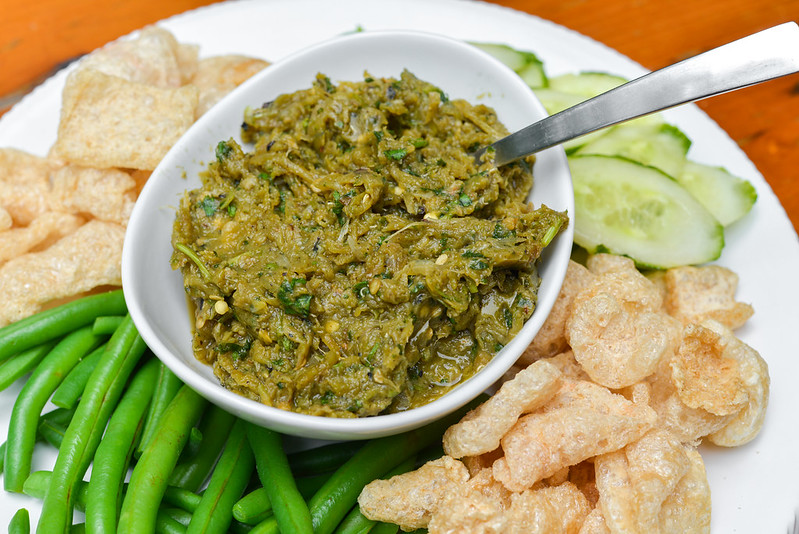 The las thing I cooked was nam prik noom, a Thai roasted chili dip. I actually haven't seen this sold anywhere around me, but while in Chang Mai, I picked up a big bag of it and a package of pork rinds and ate it while wandering around the city for a few days. I made this dip out of grill-roasted Anaheim and bird's eye chilies that were mashed together in a mortar and pestle with grilled garlic and shallots. A bit of shrimp paste rounded out the flavor and added the salty savoriness that makes this stuff really incredible. 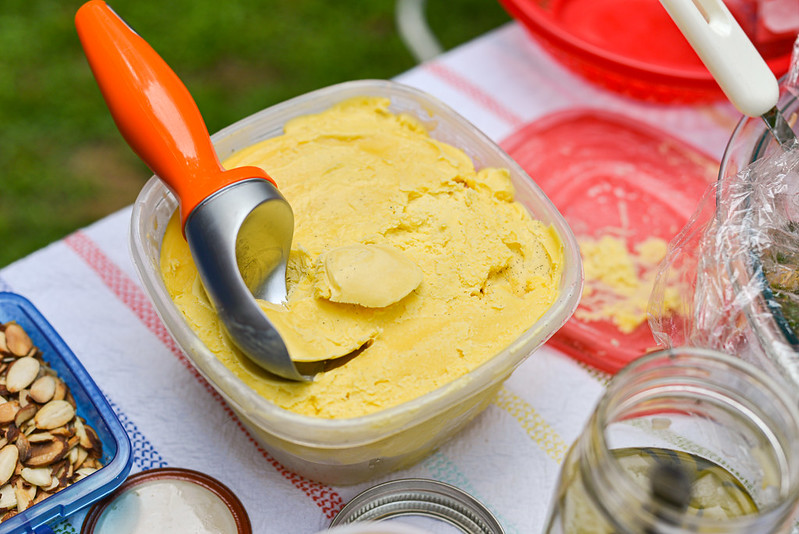 In my note to guests, I said I was going to bring the spicy, while they should bring the balancing cool things. We had a good spread of additional items like a fruit salad, tzatziki, cakes, and more. Special props go to Steve though for bringing homemade coconut ice cream that provided multiple levels of cooling comfort while also being very much on theme. 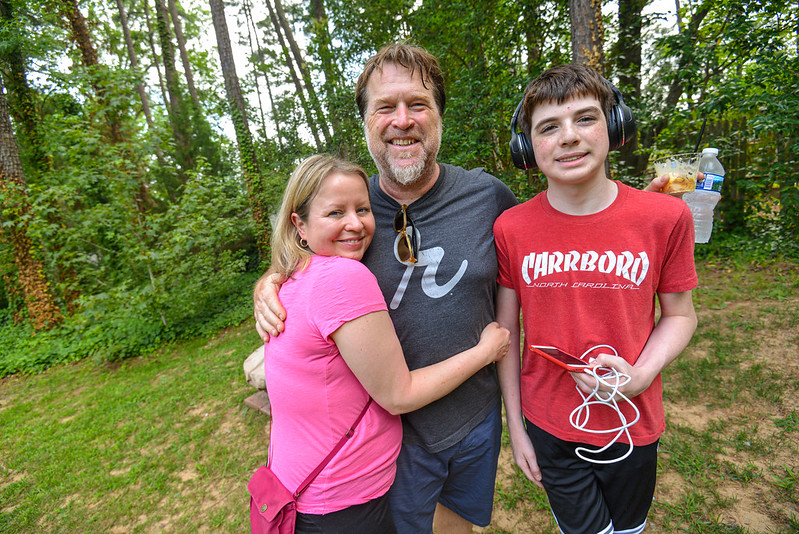 The first half of the 2019 Meatwave season has been notable for the large crowd we've had at each event. It was nice this time around to have a little reprieve from that with a smaller guest count, maybe around 15 folks. We start the roll call with Josh and Mary, who brought along Josh's son for his first Meatwave. 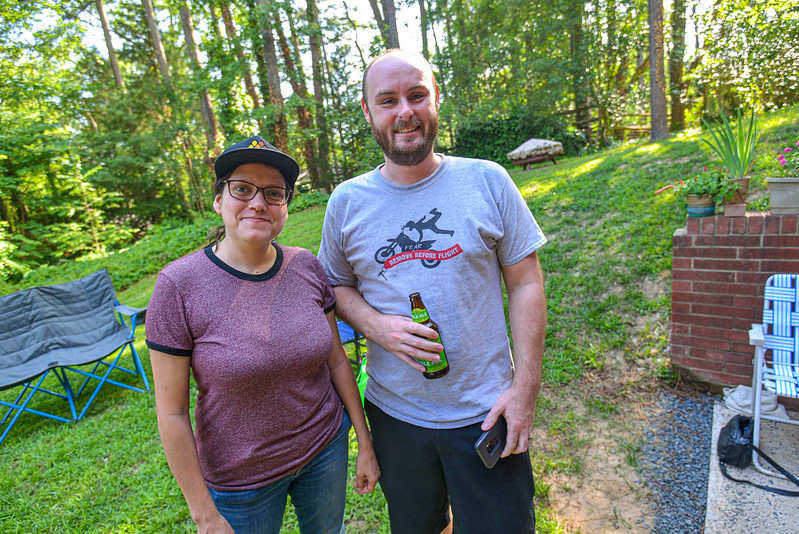 Now we move on to Ryan and Mel, enjoying the weather that was also quite lovely. In the days leading up to The Meatwave we were having a welcomed cool spell after a heat wave, and this Sunday may end up being the last pleasant outdoor weather day until the summer heat breaks, usually around early September. 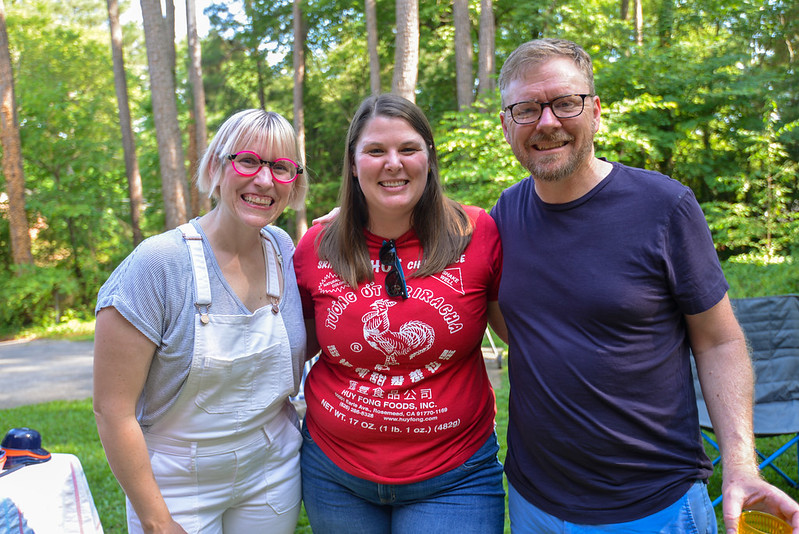 Leslie, Juliana, and Steve are all smiles, happy for the beautiful day, good food, and even better company. 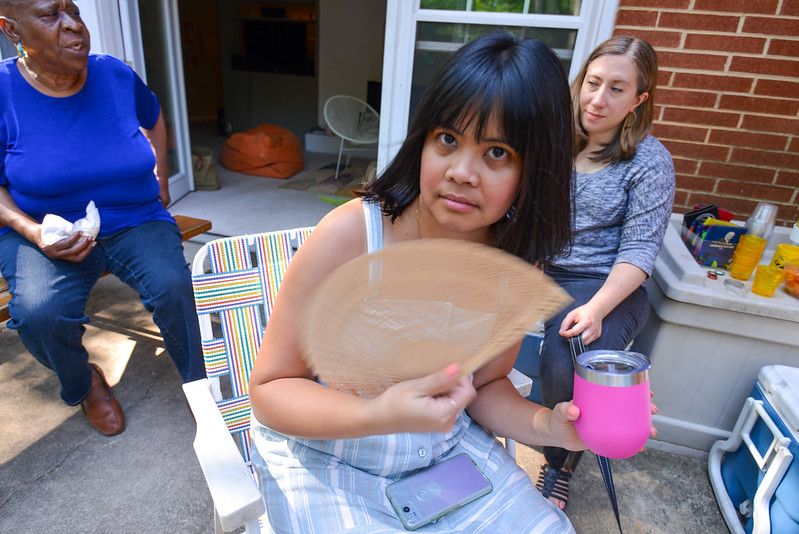 Although not physically hot outside, Kristin still busted out her fan. Her glass there may be full of one item I made that I forgot to photograph—jalapeño lemonade, which followed a sweet and lightly tart start with a good kick of heat at the end. 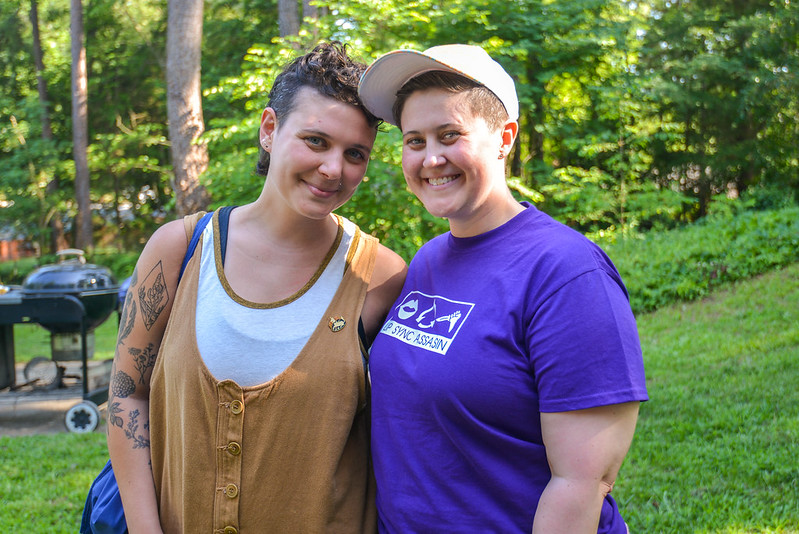 If you'd happy about more seafood coming to the Meatwave, you can thank Chelsea and Christina for that. They're pescatarians, and just as I've become accustom to considering the best dishes for vegetarians, I've been cooking more seafood specifically because I know they'll appreciate it. 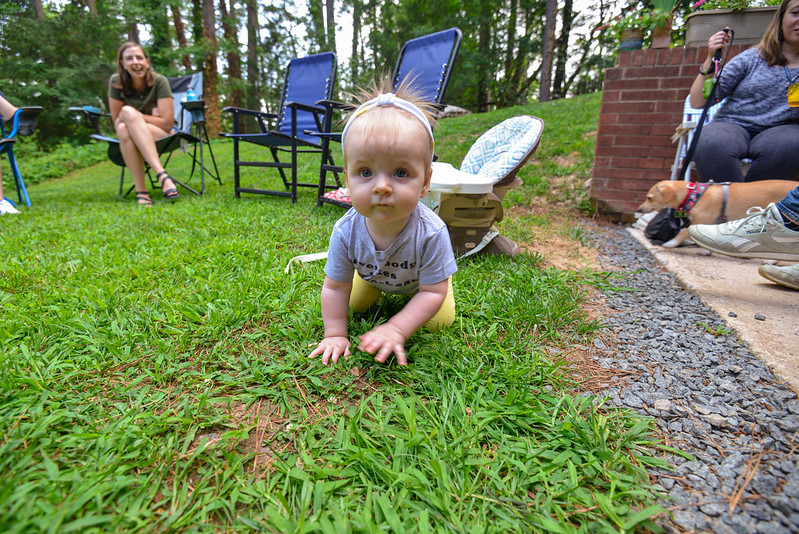 This time last year, Brooks was not even with us yet, and now she's already crawling. Seeing her reminds me that spicy foods at The Meatwave takes partially credit a couple births in the past—twice, mommas-to-be showed up to The Meatwave with the hopes that some spicy meats will give their young'n the push needed to come out, and each time there was a new baby within a few days of those visits. 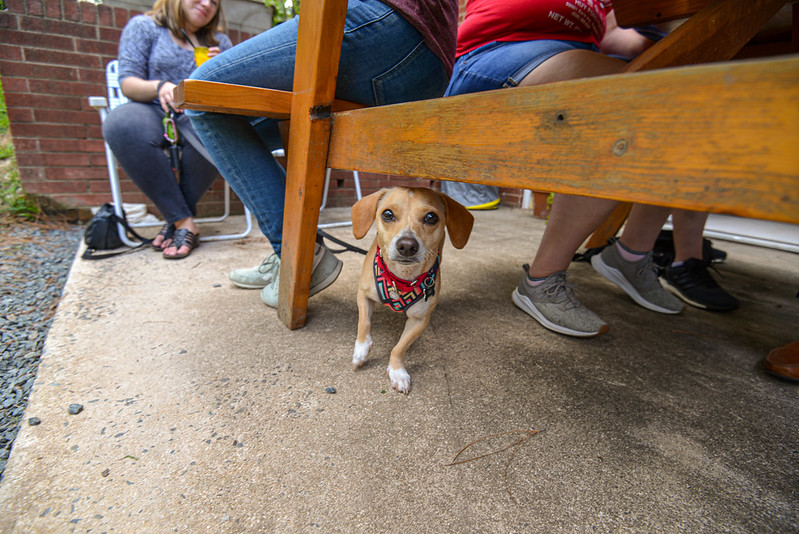 We'll closeout this Meatwave with a new addition—Trixie! She's a rescue and a bit shy, but I can't help falling in love with all my animal guests, and Trixie is no exception. Hopefully The Meatwave will help her come out of her shell a little more, but that will have to wait because, unless there's a random cooler day in the next couple months, we're going into extreme heat hibernation until mid-September, when the cookouts resume with a Filipino-inspired feast. I'm really looking forward to that, so hopefully time flies so it won't feel long until we're grilling again.