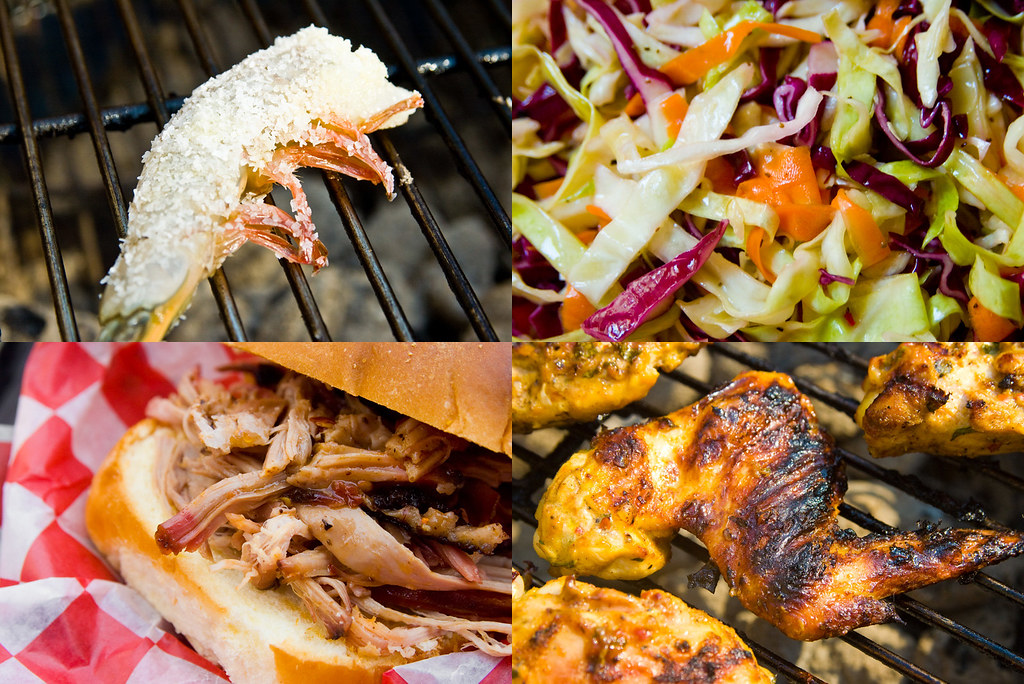 I'm not trying to make you feel bad for not being there, but this year's Carne-val was the Meatwave of all Meatwaves. I don't think we've ever had such a great diversity of meaty flavors as we had this past weekend, each one exquisite in its own right. Ok, so maybe I want you to be a little jealous, but it's out of love. I just wish I could share the wonders of Carne-val with everyone, since it ended up being a true celebration of all things meat! 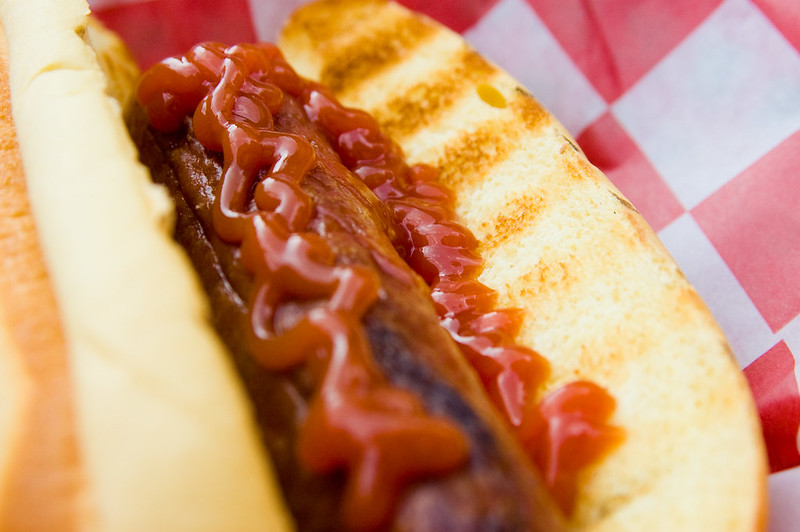 For Carne-val I decided that there was nothing better to celebrate with than pulled pork, so that's what I was cooking up. Unfortunately lunch time rolled around and the pork was not yet finished. Even though it started smoking at midnight, 13 hours just wasn't enough for the large pork butts I had bought. I refused to pull the pork off out of the smoker before it reached 190 degrees, so I had to turn to some other form of nourishment to quell my lunch time hunger pains. I went for a beloved hot dog, which I don't believe I've had even one yet this Meatwave season, for shame. It hit the spot, and then I could patiently continue to wait for the pork's temperature to rise, bringing it to the height of deliciousness. 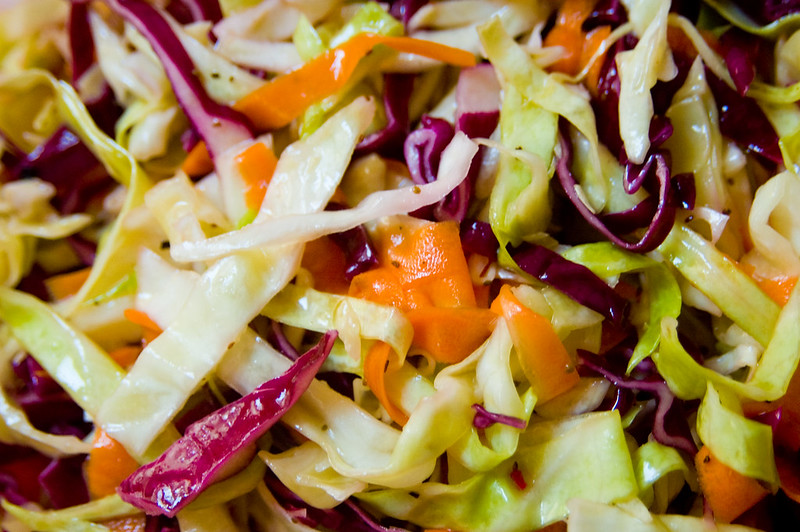 Between the time I started the pork at midnight and before that hot dog, I made a bunch of accompaniments for the feast. I started with some coleslaw, since it seems only logical that pulled pork and slaw should be served together. I'm not really a big fan of slaw, or not the heavy mayo version anyway, but I did love the lemony vinegar version I was served at the Big Apple Barbecue Block Party. So I made an attempt at duplicating that, and although taste wise the slaw was fine, I think there was something in the way I chopped the cabbages that made the texture not quite right. It was still good and gotten was never-the-less, but I need some obvious sharpening of my coleslaw skills. 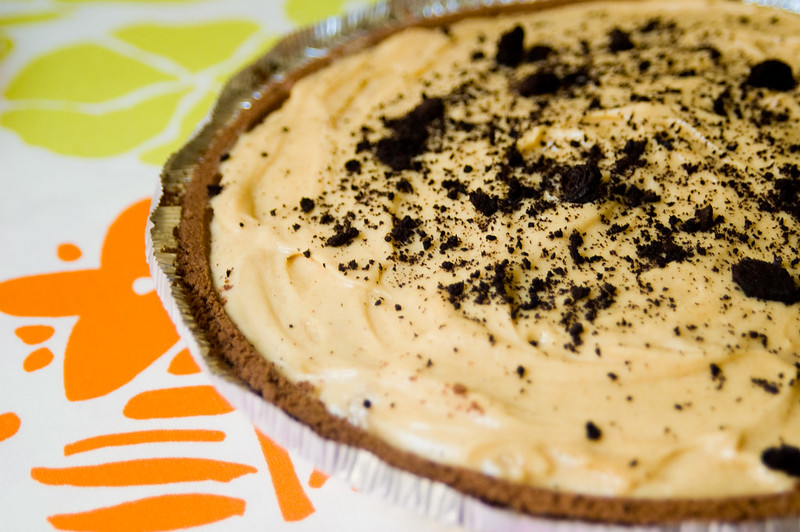 For dessert I made a peanut butter pie. I had one of these at Pies and Thighs last summer, and I've always dreamed of making one at home to feed my need for more. The pie was incredibly easy to make, no-bake and quick. Made with 8 oz of cream cheese, a cup of peanut butter, a cup of sugar, and 1 cup of heavy cream, whipped, the pie was leaning heavily on the extremely super rich side of the food universe, the exact stuff that can bring on a good case of the gout, also meaning it was delicious. 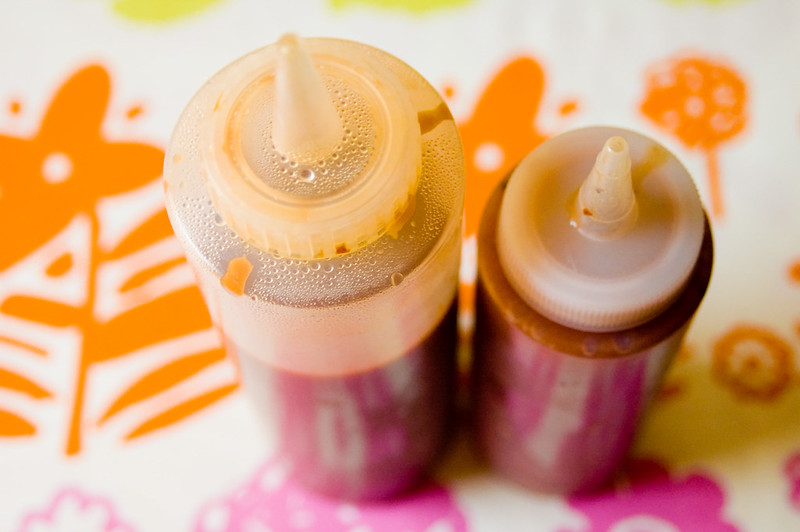 The pork should speak for itself, but it's even louder if you give it a good sauce. So I made two options for the Meatwavers to choose from. The first was Mock Ridgewood Barbecue Sauce, found in Peace, Love, and Barbecue, which has become my all time favorite bbq sauce for topping off pulled pork. The second was a quick vinegar sauce that was sweet, spicy, and sour, and actually ended up being the flavor winner in my book, complimenting the pork in a way that was more interesting and flavorful than the standard bbq sauce. This sauce came from my Taming the Flame, which I recently won in a Serious Eats contest, probably the first thing I've ever won in my life, yay. 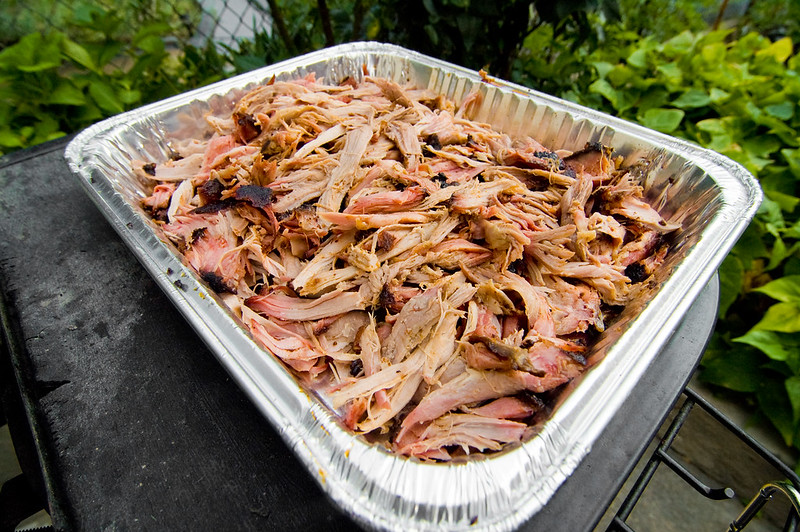 After all that was cooked and I had downed my hot dog, it wasn't long until the pork hit its magic number. Right away I wanted to pull it, but it was way too hot to handle, in the literal sense. I went outside while the pork cooled down, only to be told a few minutes later that Kris had magically accomplished the task of pulling the pipping hot pork butt (her secret was to pull with a fork, brilliant). So with no delay almost the entire first 7lb pork butt was gone. I don't brag too often, but I must say this is the best thing I've ever made in my entire life. The pork went beyond earthly delights, into a heavenly world that's filled with nothing but the most tender flavorful pigs that just keep getting better with each bite. 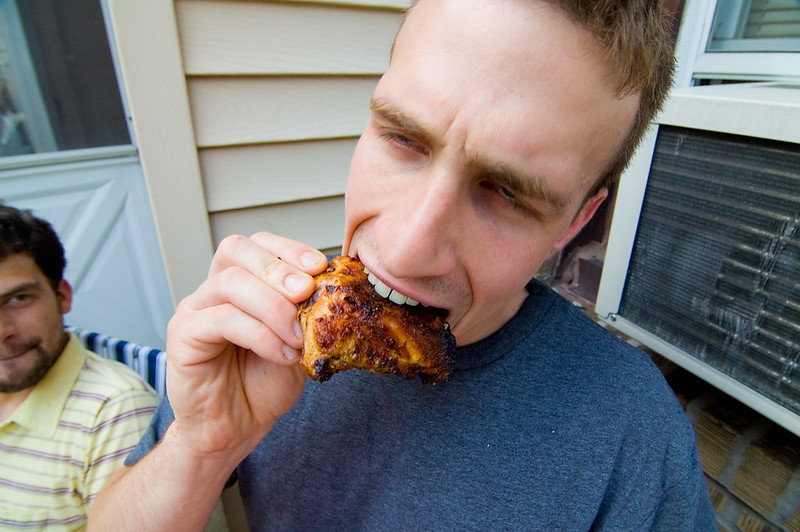 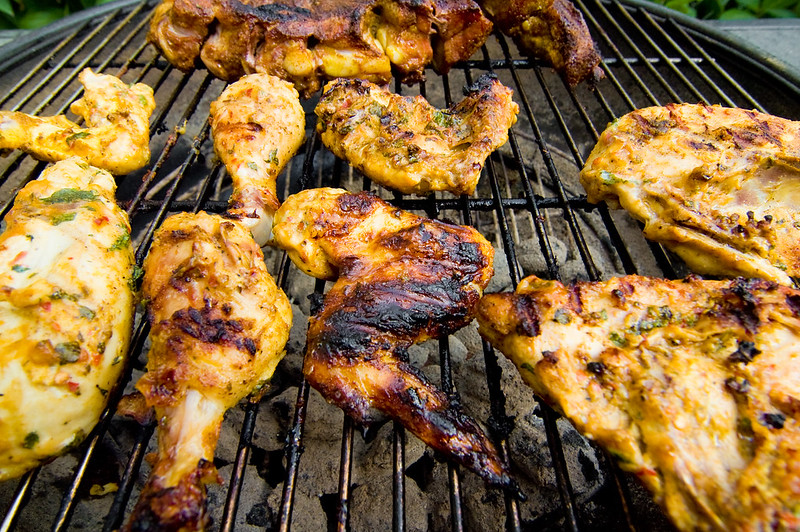 Now Carne-val isn't just about pork, it's a celebration of all that is meat, and Pete provided some diversity with his chicken. He made full chicken cut into pieces, marinated in a spiced yogurt sauce that grilled up extremely moist. Pete is a master at his chicken and poultry marinades and this was some of his finest work to date. I'm thinking he should be the next profiled Meatwaver, in hopes that he'll share this recipe with all of you. 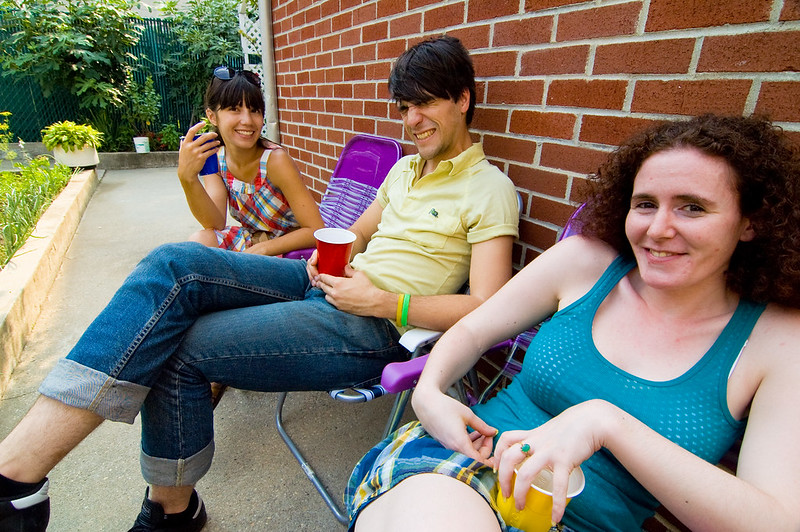 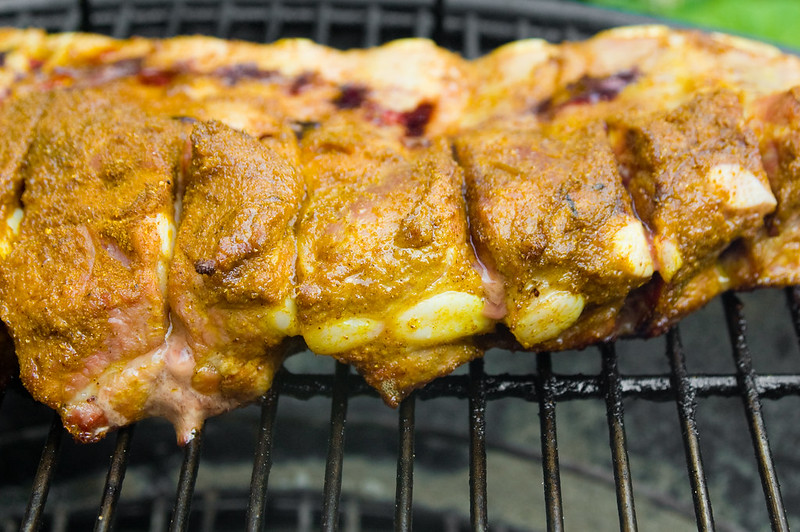 Tea has to be the most creative of all Meatwave cooks. Each week she brings the most interesting and compelling creations to ever pass through these parts. This week she brought a rack of ribs, done up with a wet curry rub. I would have loved to smoke these and bring them to pork tenderness, but there was no time for that and they went on the grill. Surprising to me, the ribs held up great over the high heat and it was an extremely tasty rub. My only regret was that I saved the ribs for last, so I was already in my meat coma, and could not eat more than one (although they were left with me to keep eating during the week).

Marissa and Tom made it out as always, and bringing drinks in tow. Not being able to eat the rolls, Tom brought with him corn tortillas as a hand to mouth pork delivery device. This got me thinking...bbq pork enchiladas? 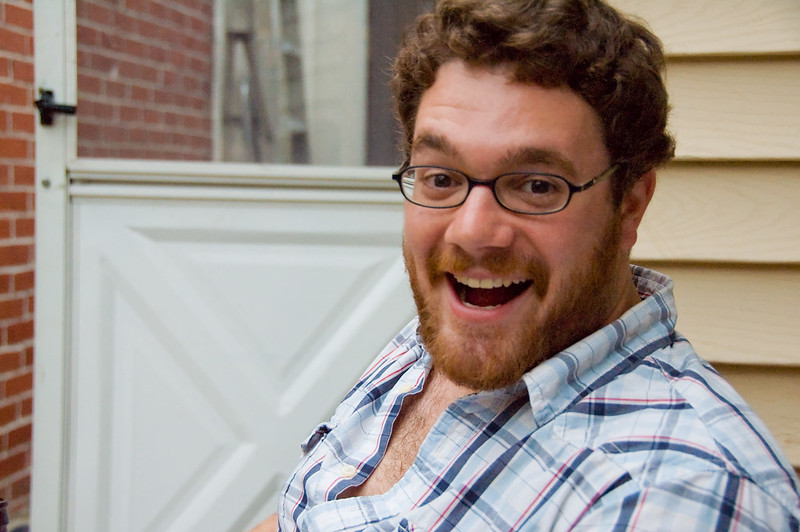 Marissa brought along a new Meatwaver, Mike. Now there's two Mike's, so I guess old Mike might have to go back to being Schnapp if the new Mike sticks around, and I hope he does. Already in the Meatwave mind set, Mike provided the beer for this week. He also is a designer for the WWE, which is totally hot. I expect some big beefcake wrestlers to start showing up to the Meatwaves from now on. 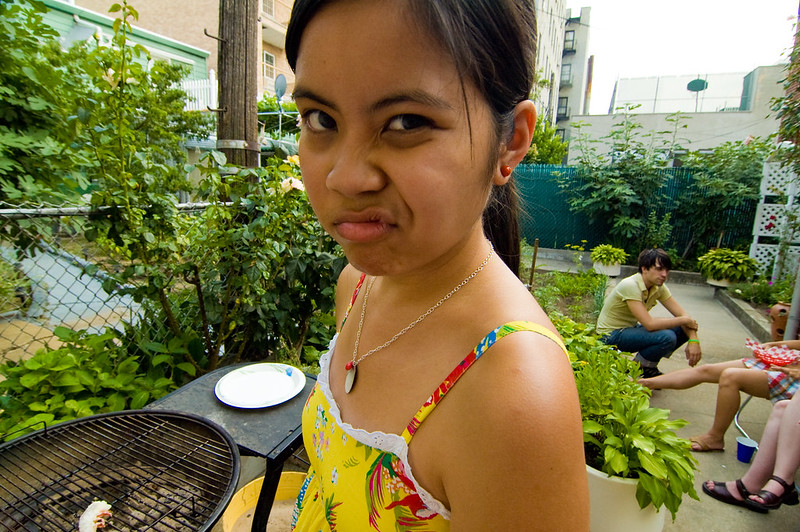 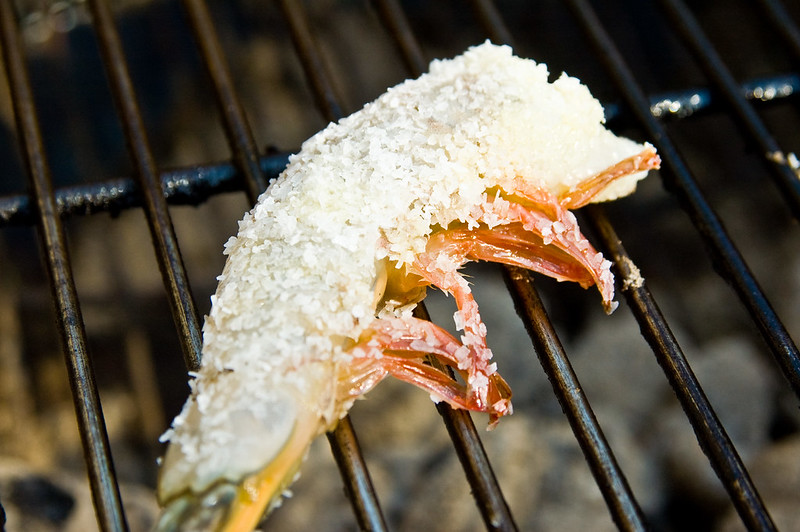 Kris is usually my right hand man (or woman, or Filipina, you get the point) in executing all things Meatwave. Without her I doubt I could get this all done every other week, but she's also fierce with her own food creations as well. She took a page out of our new arrival too, Taming the Flame, and made a recipe for shrimp. An inspiring cooking method if I've ever seen one, she left the shell on the shrimp and rolled them in salt until they were completely covered. Then she grilled this salt encrusted creatures from the briny deep, and when finish, she peeled off the shells and dipped them in a very potent lemon sauce. I'll admit, I do not like seafood, and I was still too much of a wuss to try these, but they were all eaten up, leading me to believe they must have also fallen into the delicious category. 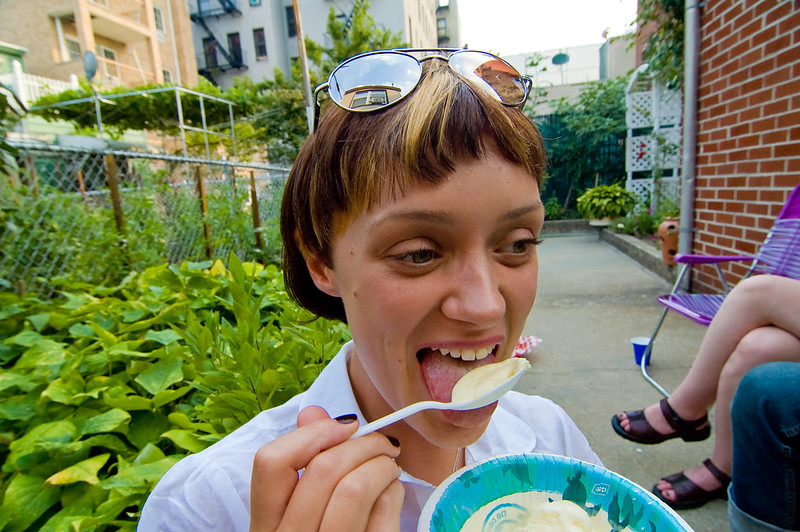 Suzun was back from a short absence due to family travel and learning to become a doctor, which I guess are passing excuses to miss Meatwaves. Being our resident vegetarian, there's usually very little she can actually eat that's being grilled, but she does seafood, and took a liking to Kris's shrimp. Maybe we'll have to make a some sort of seafood Meatwave for her one day, even though that does sound very meaty, I feel like we owe it to her. 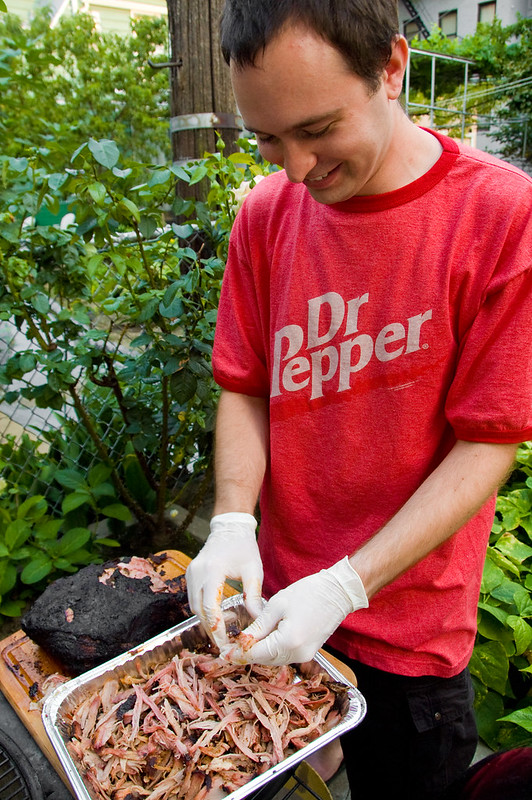 As you can see in the photo above, Carne-val induced a smile on my face that is still holding up days later. I wouldn't be surprised if you see me with a smile for the rest of my life after this weekend, since this Meatwave was the perfect mix of great friends and ridiculously delicious food that make a bbq everything it should be. I can't imagine a Meatwave as grand as Carne-val, but I know I'm still going to try in another two weeks at Meat Stroke, and then again and again, hopefully until the end of time.