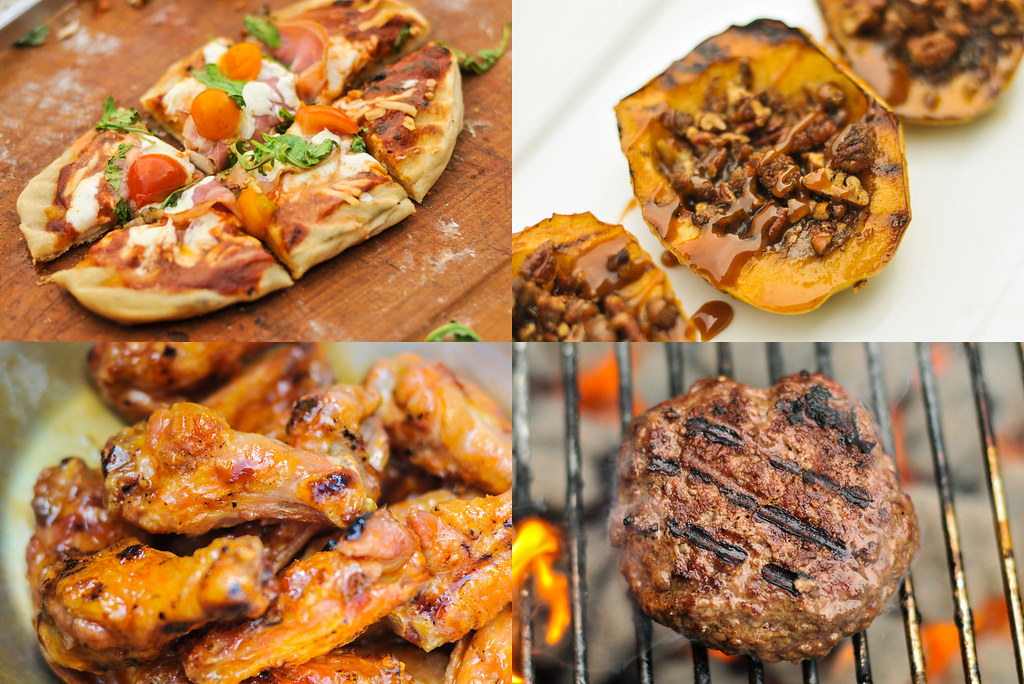 It's not officially a summer until we've celebrated Carne-val. While ever other Meatwave has it's own unique pun-filled name, Carne-val has been a constant, and 2012 marked ninth time we've indulged in this feast of all that is meat. Not letting Meatwavers down, I made a menu of diverse items that are favorites of many, rolling some history into this meaty affair. 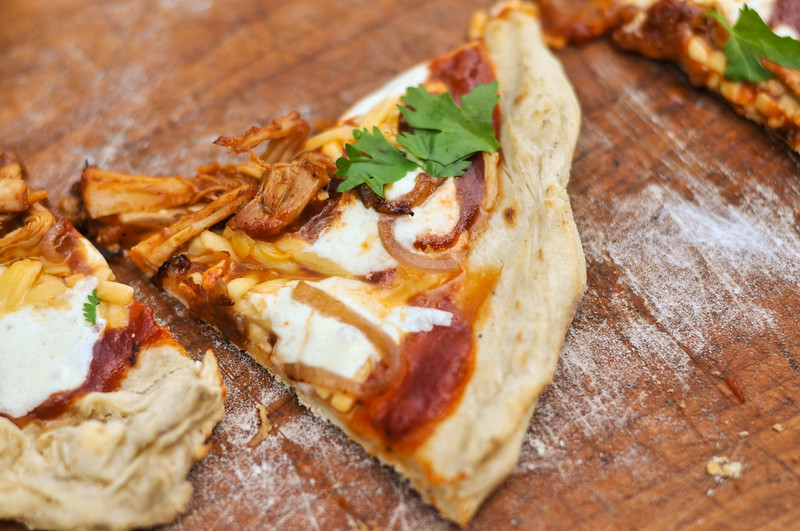 First we started with a real favorite, grilled pizza. I tend to do most all of the grilling at Meatwaves, but come pizza day, everyone chips in with toppings and makes their own pies. This sense of sharing and DIY is something I relish in, hitting the ideals of the Meatwave right on the head (love the meat, share the meat). 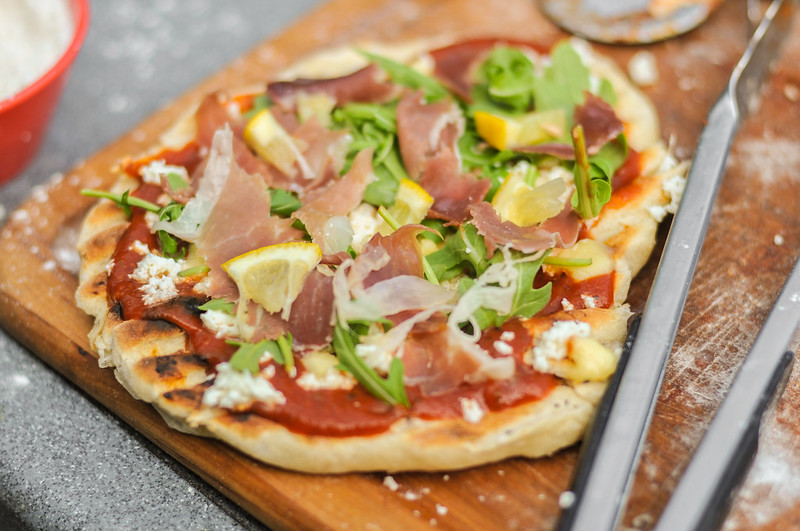 Here's one of the most beautiful pies of the day—assembled by Chuck—that exemplifies the creativity of the Meatwavers. It's a mixture of regular pizza sauce, mozzarella, arugula, prosciutto, and lemon. 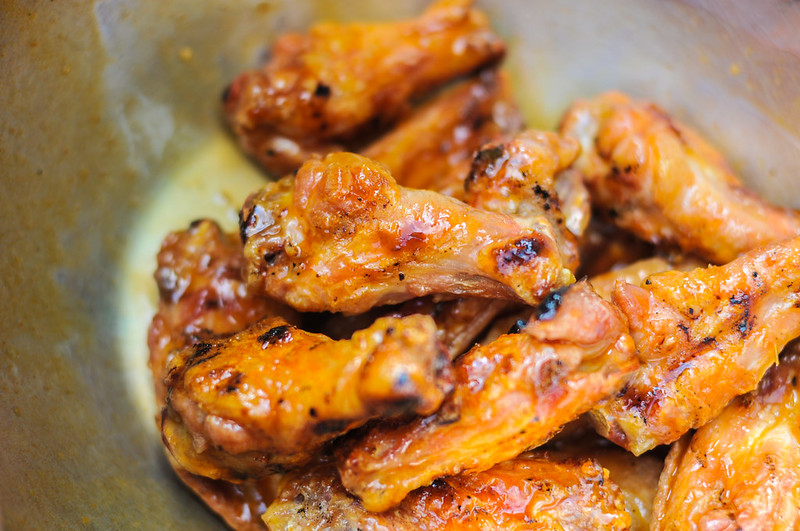 I have a hard time having pizza without wings, which is why I grilled up a round of my special Ultimate Buffalo Wings. These were just the right amount of crispy and juicy, coated with a spicy butter and Frank's Red Hot mixture that always hits the spot. 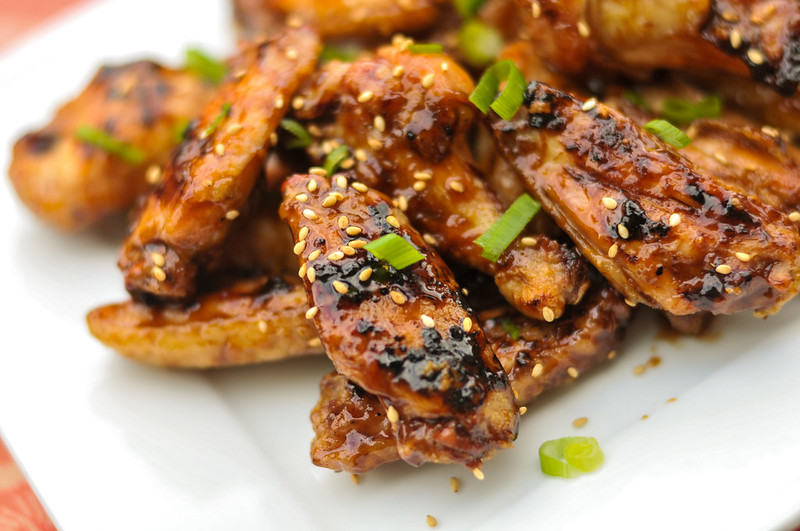 Then I added a new recipe into the mix with these Hoisin-glazed wings. They started out much like the buffalo wings—coated in baking powder and cooked over indirect heat until crisp—but got a brushing of a hoisin-honey sauce before being taken off the grill. They were then garnished with some sesame seeds and green onions that make them all pretty and extra fantastic. 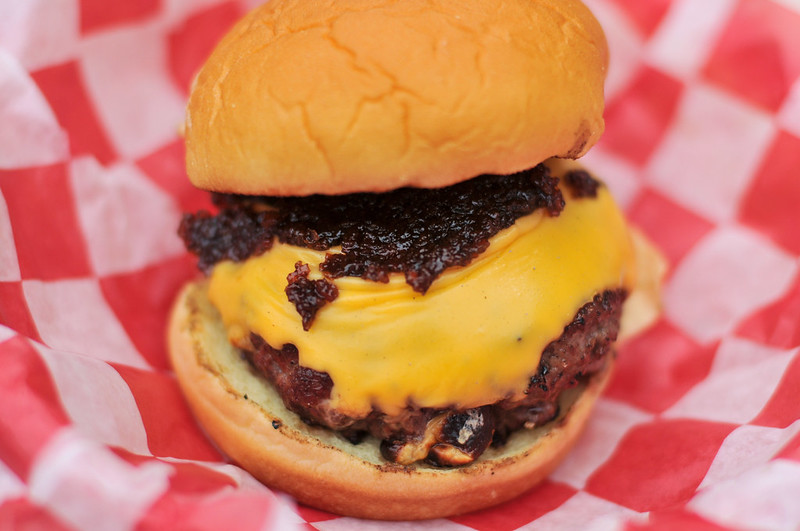 On top of the pizza and wings, I picked up four pounds of nice fatty chuck at the butcher and made a round of burgers. Beefy and juicy, they were excellent and a crowd pleaser, and only got better when topped with bacon jam! 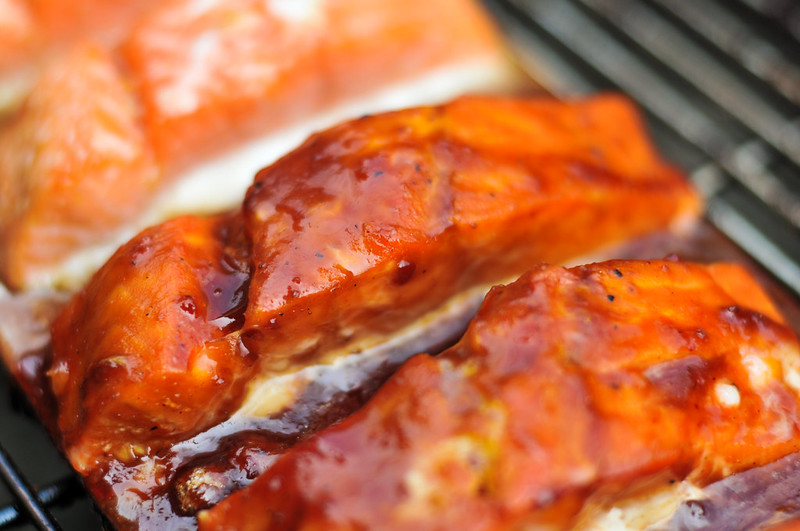 This was also the last Meatwave before the team heads up to the Hudson Valley Ribfest in New Paltz in two weeks. So while I had the grills going, I did some competition recipe testing, including these planked barbecue salmon. I'm not much of a fish cooker, and my salmon experience is basically nothing, so this equated to a somewhat tepid first try, although I'm definitely on the right track. Without much time left to test, I'm just going to make some adjustments for the comp and pray it all goes well. 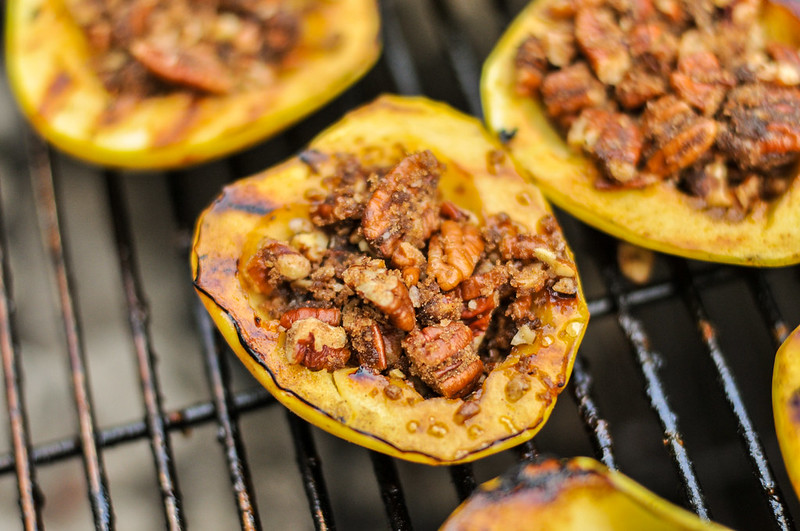 Dropping my usual ice cream offering, I went for a couple grilled desserts instead. The first was another test for competition—peacan-stuffed apples with caramel sauce. Unlike the salmon, which needs work, I think I got the apples down well on the first try. Now we'll just have to wait and see what the judges think. 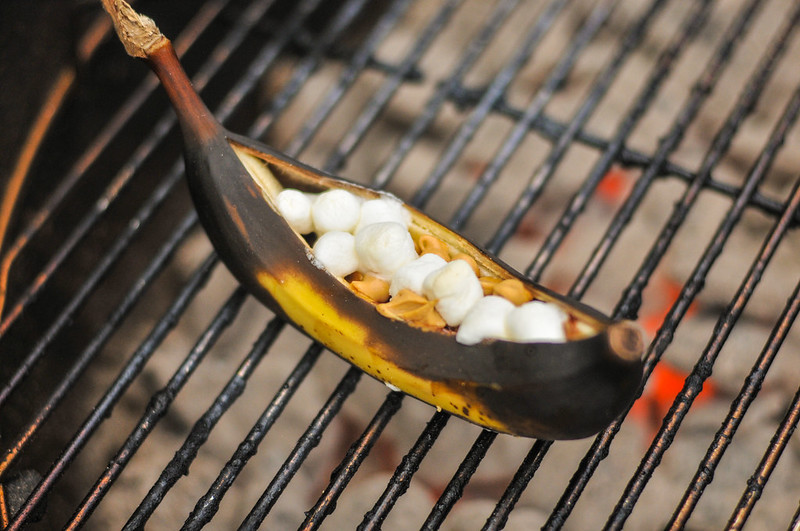 Finally we made these banana boats (they were actually supposed to be a dessert at the last Meatwave, but in the insanity of 25 people and nearly 100 degree weather, I forgot all about them). Nothing much to these, just split a banana in the peel and stuff with whatever your heart desires. These had a combo of milk chocolate, peanut butter chips, and mini-marshmallows that melded into a delicious mess that could be scooped out with a spoon after being grilled. 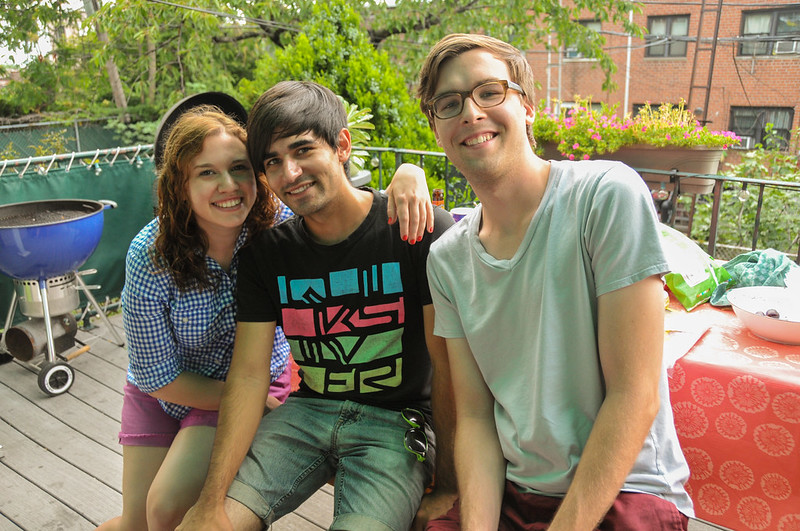 After a few weeks of mega-Meatwaves, I was kind of relieved with a more intimate crowd this time around, which included regulars Rachel and Chuck, who brought their friend Tyson and lots of tasty pizza toppings. 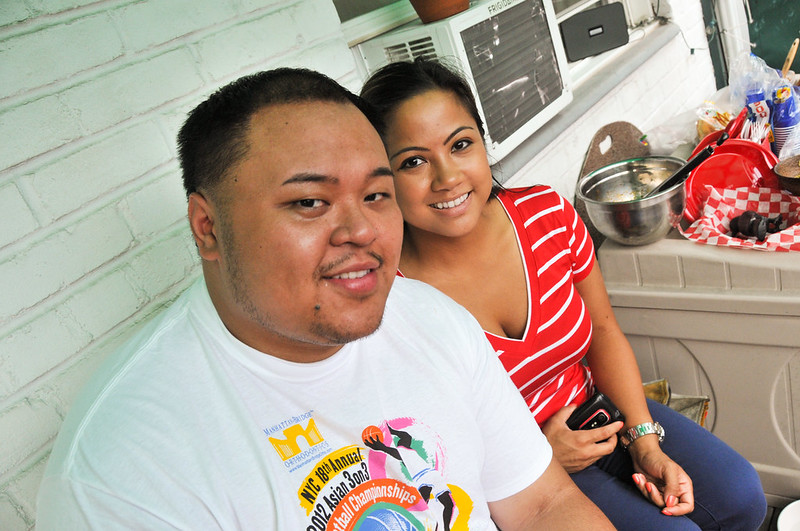 Then we have Treyci and Tito, who get mad props for helping quickly disassemble the outdoor Meatwave set-up and getting everything indoors before a giant storm hit later in the evening. Not able to grill anymore, we ended up taking the party to the city for a round of delicious Italian ices. 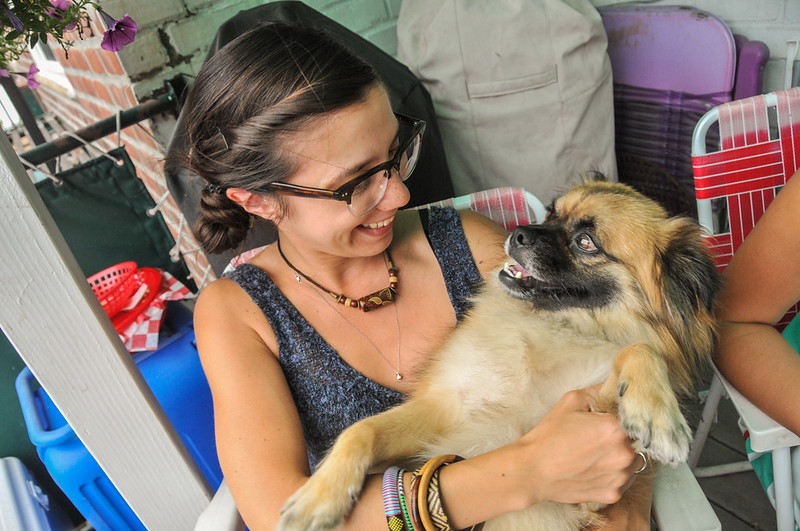 Next up is Marissa and Reggie. Both were super happy that they had not only meat, but another friend there too... 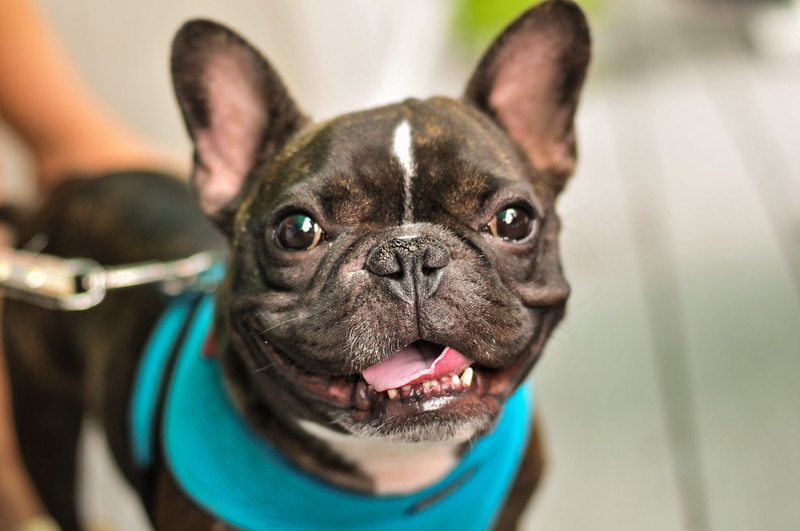 Porkchop! My favorite little Frenchy, I think we should elect him as the official Meatwave mascot. Just throw some pig ears on him and he'll fit right in, right?