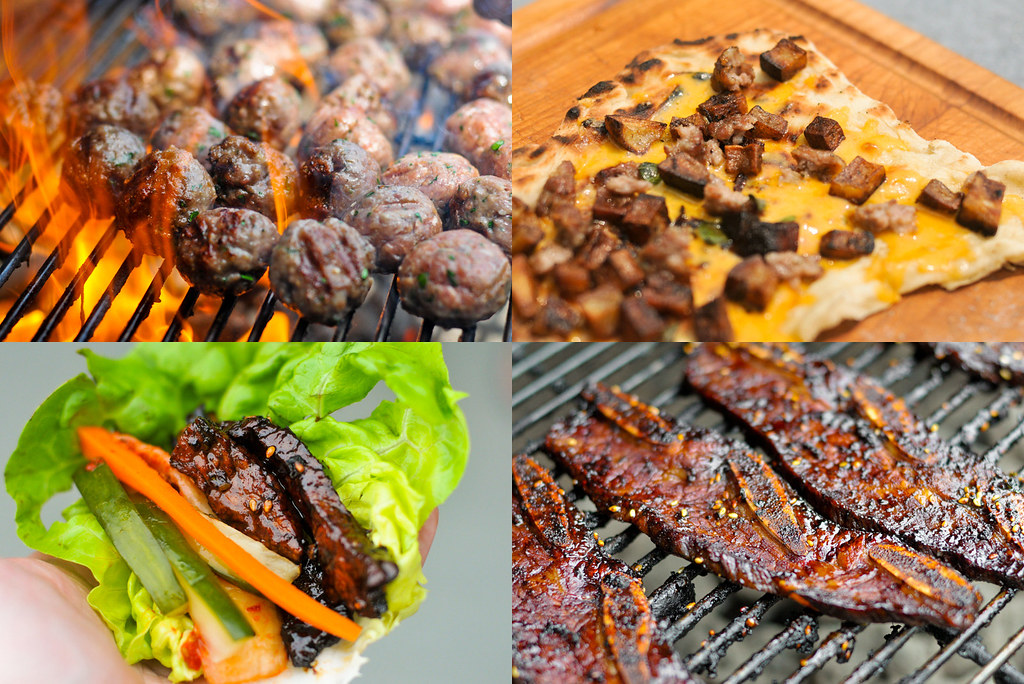 Last year a couple Meatwavers maxed out on meat and booze and found themselves incapacitated to make the arduous journey from Queens to Manhattan. So they spent the night and as we all slowly awoke the next morning I got to thinking, what could be a better cure for a meat hangover than more meat! Unfortunately I was unprepared that day, but born was the idea of the Meat-a-thon—an all out meat eating weekend. This past weekend was the first of the Meat-a-thons, which I hope will be become a yearly traditions, that spanned two days, three world cup games, and what seemed to be endless waves of meat. 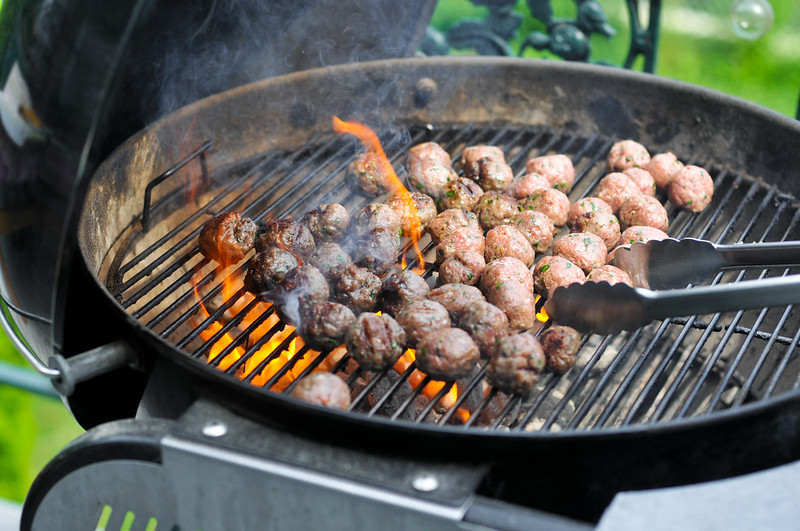 Brace yourself, because two solid meat eating days have resulted in what might be just be the most prolific meat post to date!

We started the day with the watching of what would become an ill-fated World Cup game between the USA and Ghana. As I had turned my attention to the dinner that would follow the game, Joe graciously provided the meaty sustenance required for a sitting on your ass during a long televised sporting event. He grilled up a plethora of cheese laden meatballs that were pared with a marinara dipping sauce. Fitting the bill nicely, a plate of meatballs that seemed like it would easily feed 20 was devoured by five by the end of the game—perhaps we were eating away our sorrows. 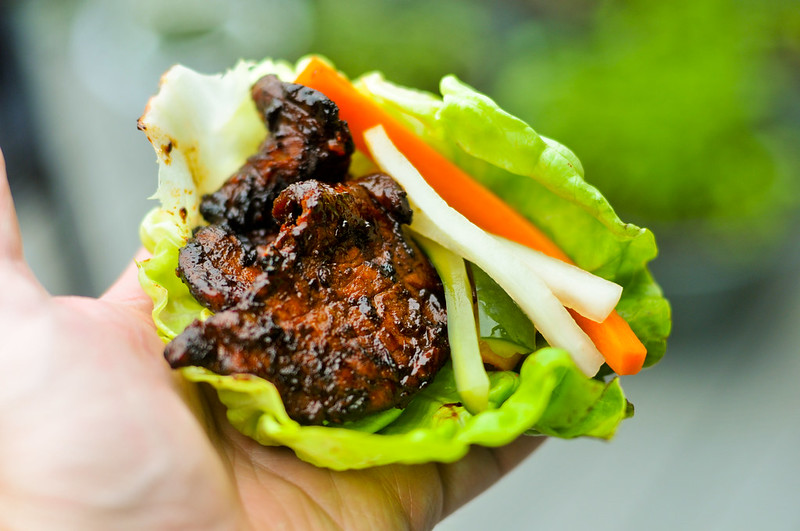 Any soccer induced sadness was short-lived, as we drove straight into prime meat-eating time. I had a trio of Korean meats on the line-up, starting with Daeji Bulgogi, spicy pork. Consistently my favorite at Korean BBQ joints, I was most excited for this meat and made the largest quantity of it out of the three. Just as I love it—spicy and bursting with intense flavor—this lived up to my expectations. Rolled up in some lettuce with kim chi and quick pickles, it was absolutely perfect. 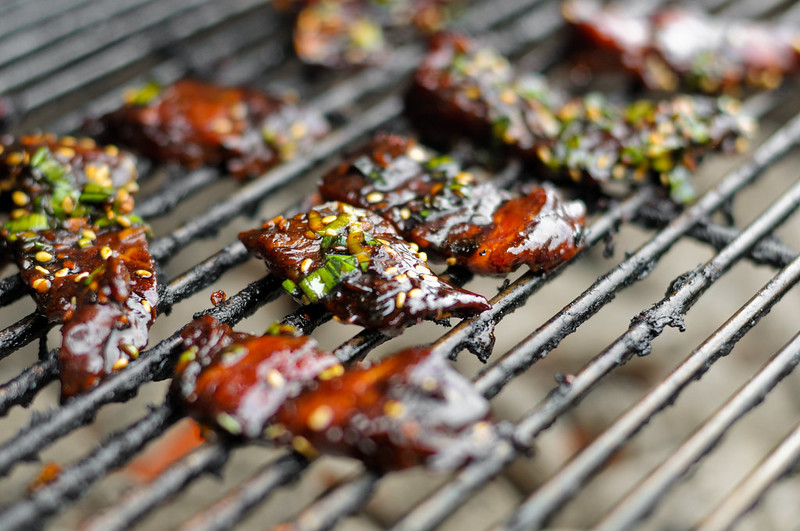 What was a surprise was that Bulgogi totally blew the Daeji Bulgogi out of the water. Bulgogi is always pleasant enough whenever I get it, but it never matches the flavor I love in the pork, but this particular Bulgogi had it all going on. The flavor was strong, but not so intense it distracted from the tender beef. More easily eaten en mass than the pork—due to it's lack of spiciness—this was the clear crowd favorite of the evening. 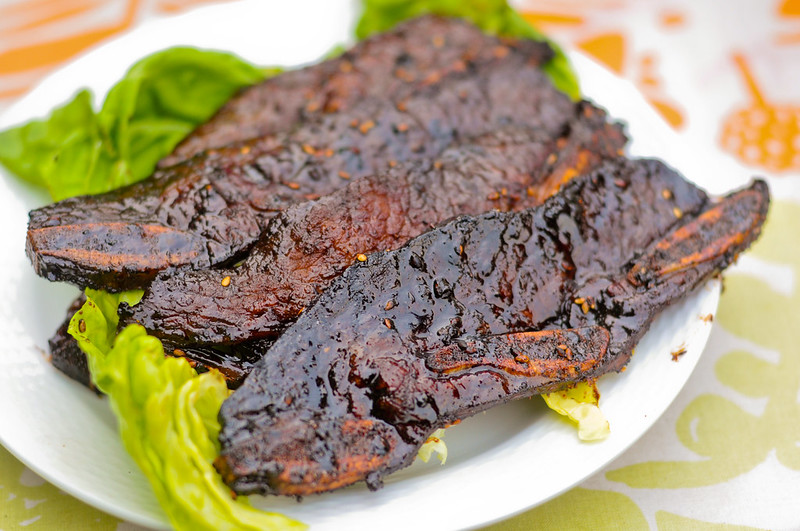 Third up on the meat list was Galbi—marinated short ribs. I had to venture to some Asian markets to find flaken cut thin enough to make this (somehow I didn't see myself convincing my Italian butcher to saw short ribs to a quarter-inch slices). The marinade was pretty similar to the Bulgogi, but with some added tenderizing agents like an Asian pear and Sprite that helped make what would normally be a rather tough piece of meat into something that can be pulled from the bone and enjoyed with minimal effort. 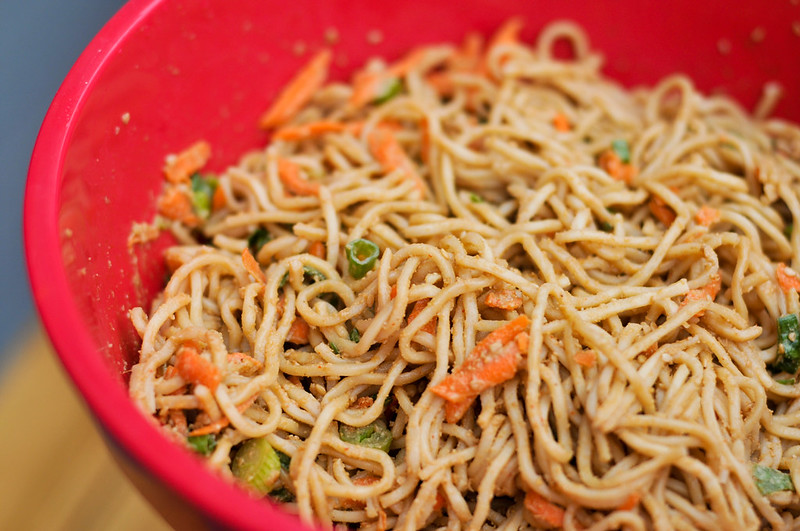 To cut through all the meat, I also made a delicious cold sesame noodle salad. One of those one-size-fits-all pan-Asian creations, this sesame and peanut butter based noodle dish went just fine and dandy with the rest of the menu. It took residence with some quick pickles and kim chis that were also in the side item buffet. 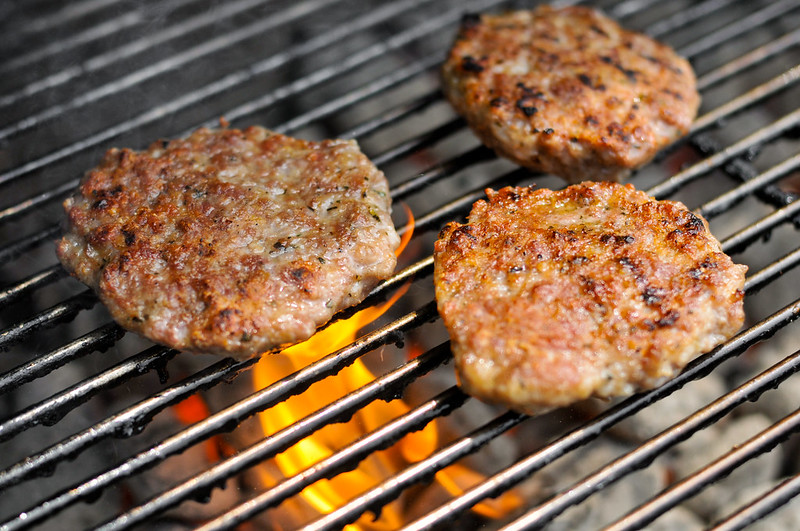 I decided to go in a totally different direction for day two of the Meat-a-thon, starting out with good ole American breakfast patties. Of all the sausages I've made, I never got around to making one of the most enjoyed in our nation, with a spot reserved for it on almost any breakfast plate or sandwich. Pork mixed with fresh herbs and some cayenne and red pepper flakes made the ubiquitous sausage patties that we all know and love, and grilling them made them only better. 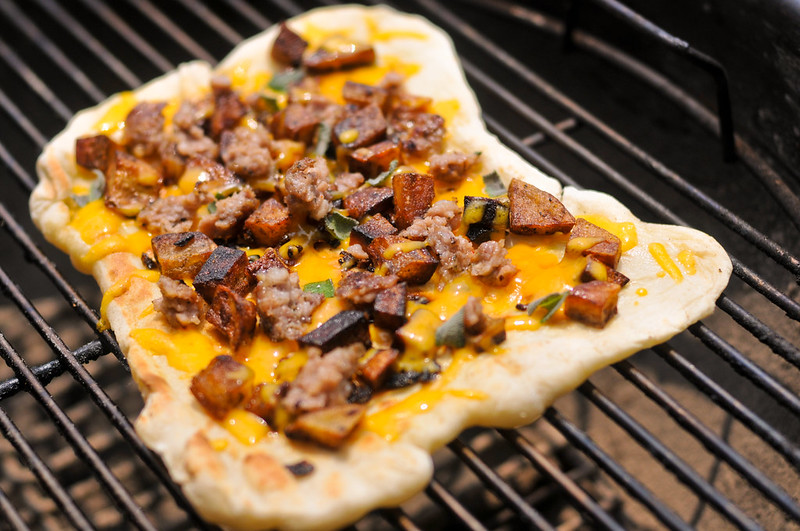 Sausage was only one piece of the breakfast equation, as they were really grilled up to be crumbled as a topping for breakfast pizza. I've never had a pizza like this, so it was kind of a shot in the dark that came out fantastically. Grilled pizza dough was topped with some killer home fries, crumbled sausage, cheddar cheese, and fresh sage. The resulting pie was an incredible way to eat breakfast, combining so many morning flavors into one easy bite. I had toppings to make other types of pizzas, but this was so popular that it totally dominated the day of pizza making. 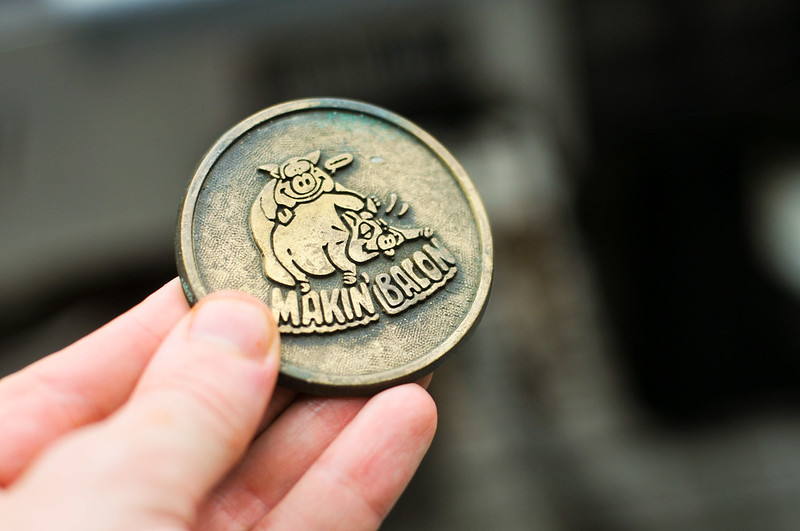 Super Meatwaver Lindsay missed out on the last Meatwave, but it was forgiven, because she was away finding this gem in the flea markets of New Hampshire. Makin' bacon indeed. 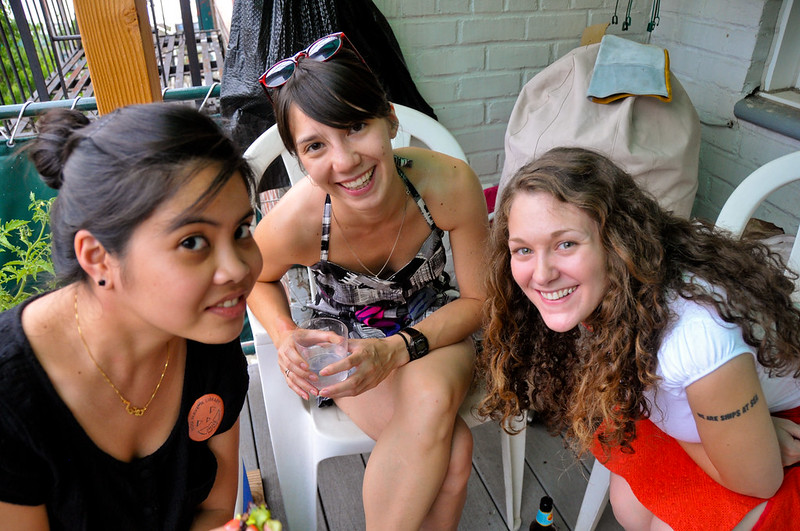 The Meat-a-thon also got Katie out from her hideaway in Illinois. Once a New Yorker through-and-through, Katie's long distance has strained her relationship with the Meatwave, but luckily she was rolling through town and was able to pop-in to rekindle an old affair with the meat. 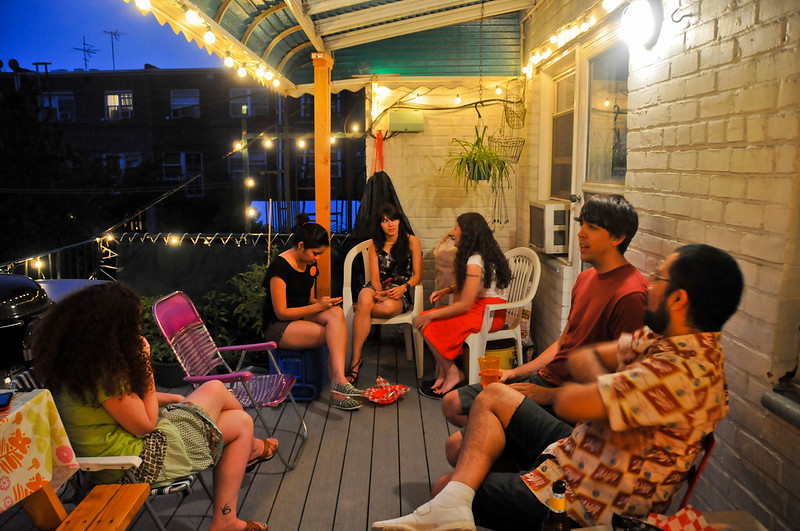 I'm coming to think Saturday Meatwaves hold an edge against Sunday. The original idea was that people are lazy on Sunday, so why not get together and be lazy together around the grill. Saturday Meatwaves, on the other hand, tend to be more festive, with the meating and drinking lasting well into the night. Maybe if I officially switched to Saturdays, they'd cease to be special and become as commonplace as Sundays are, but the idea for an official switch for next year is a-brewin'. 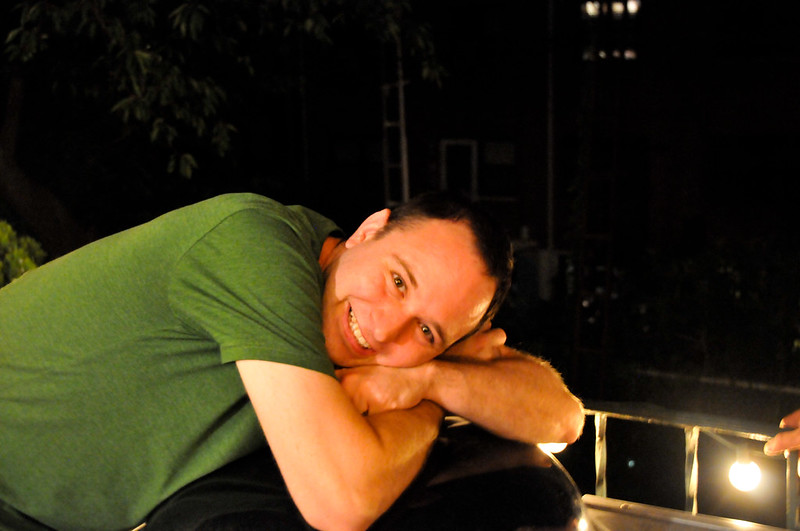 Finally, the end of the Saturday night found hunched over, hugging my grill who was giving me the loving support my exhausted body needed. Through thick and thin, my grill is there for me and I for it. The years will carry on and we'll continue to have each other, and the Meatwave will march on because of that.