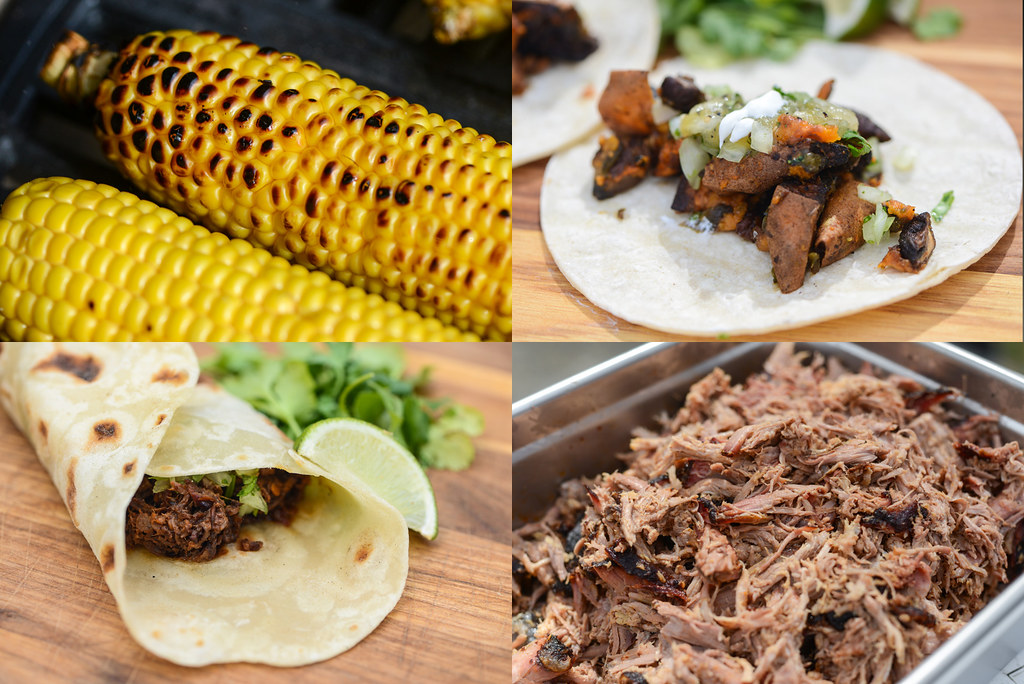 With the Meatwave turning 13 this year, we've run through a whole lot of meat puns for names to date. So much so that I feel like I'm often scraping the bottom of the barrel these days, picking up names that years ago we rejected as not being quality enough. So I when I decided to do another Mexican-inspired spread for this latest meaty installment, I spent days trying to think of a new name that was at least halfway decent. I came up with enough passable options, but then late one night with my eyes starting to shutter from exhaustion, it just popped into my head—Meat Casa es su Casa. It was so perfect and worked on so many levels that I couldn't believe no Meatwaver had previously thought of it. Proud of my fleeting moment of brilliance (or what passes for brilliance in my mind), I slapped the name on the calendar, sent out an invite, and what follows are the delectable delights born to fill out the menu. 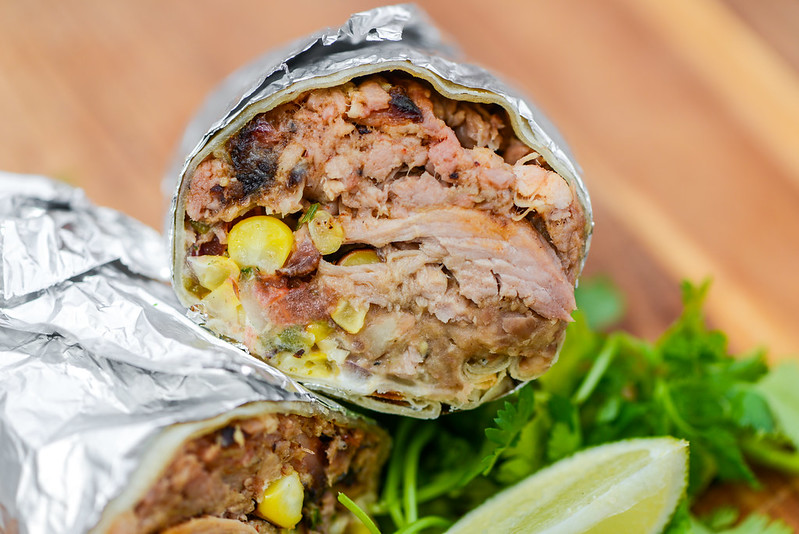 I worked this Meatwave a bit differently than normal—while I'm usually grill-side for hours, cooking everything up so it's as hot and fresh as can be, for this spread I had a ton of filling and topping options ready when guests arrived, waiting to be assembled into tacos, burritos, and tortas.

The centerpiece meat, in my opinion, was a chili-rubbed smoked pork. An earthy rub was applied to a pork butt, then slow smoked for 16 hours and pulled. This was one of the best pork shoulders I've ever made, and the chili-heavy bark was a nice change from the usually sweeter barbecue profile. It made for one tasty burrito, stuffed here with refried beans, a charred corn salsa, and sour cream. 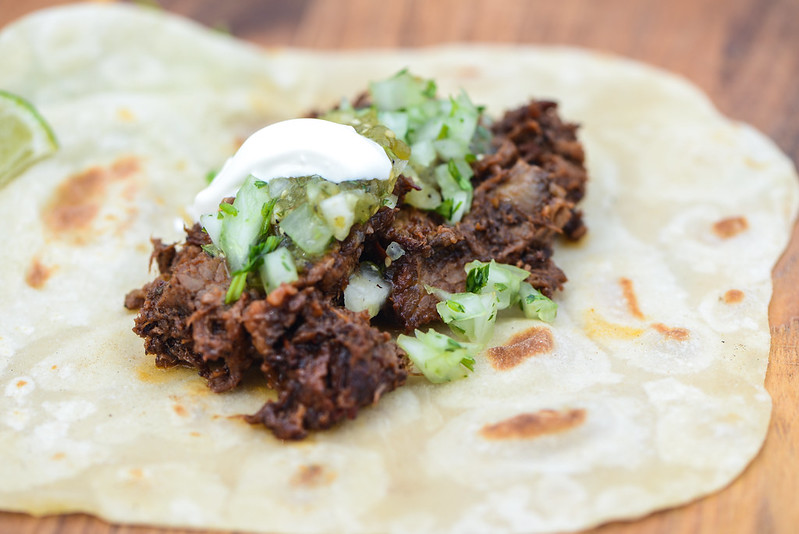 The second meat was a smoked and braised beef barbacoa. I had done a similar recipe for lamb barbacoa where I smoked a spiced lamb shoulder for three hours, then set it in a braise in the oven until completely tender. That worked out so well that I just copied it and subbed in a huge piece of beef chuck in place of the lamb and the results were just as delicious. I enjoyed that beef here in taco form, topping it with salsa verde, onions, cilantro, and sour cream. 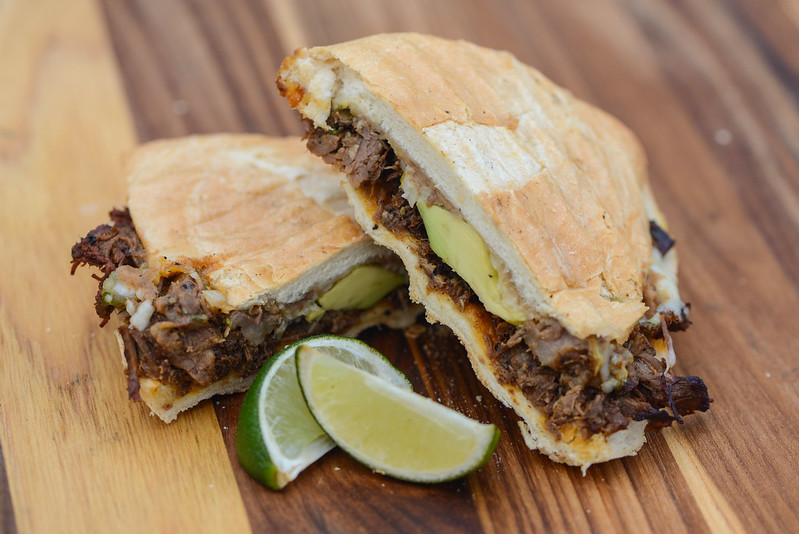 The beef was so good that I also made myself a torta out of it. This sandwich consisted of the barbacoa, slices of avocado, salsa verde, Oaxacan cheese, and a spread of refried beans piled into a bolillo roll and then pressed on the grill. The hot sandwich with its crusty bread was amazing, one-upping the taco in my opinion. 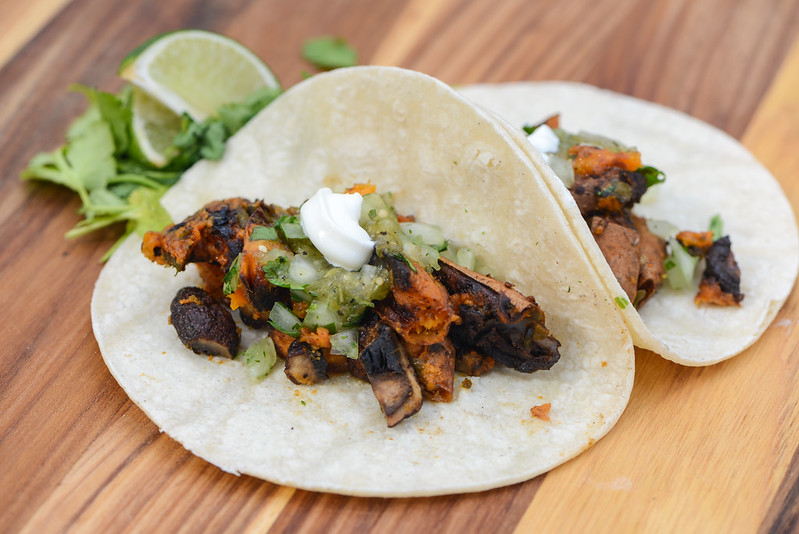 As a vegetarian filling option, I came up with this sweet potato, mushroom, and poblano mixture. I coated both sweet potato wedges and cremini caps in a simple chili-heavy spice mixture and roasted both on the grill until done. I then roughly chopped them and mixed in poblanos I had charred over the fire and then peeled and diced. The final product was a contrasts of textures and flavors, with the creamy sweet potatoes melding with the woodsy mushrooms and fruity peppers. 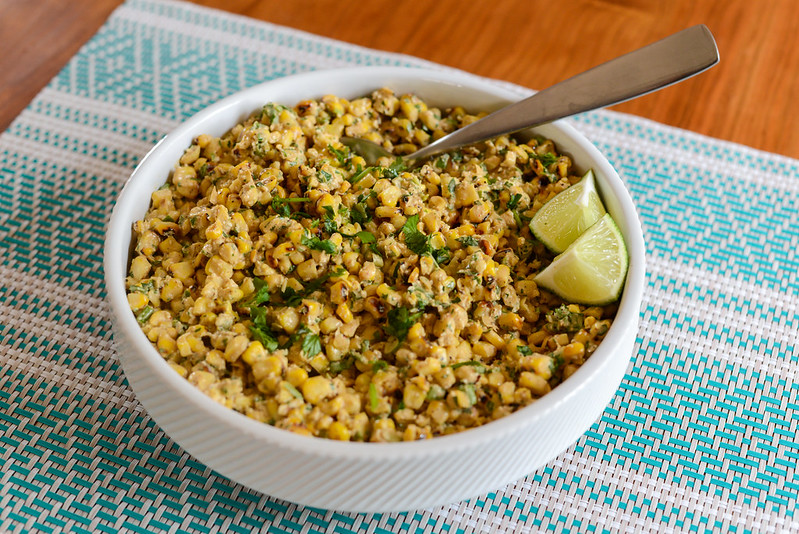 I also whipped up a plate of esquites—Mexican corn salad. I'm not stranger to elote—grilled corn coated with a spicy mayo and cotija cheese—it's been on the Meatwave menu numerous times throughout the years. Esquites is essentially the same thing, but with the kernals divorced from the cob and assembled into a salad form. I was totally digging it served in this manner as I was free from the commitment of eating an entire ear and saved from the embarrassments of my ungraceful consumption habitats, where elote usually leaves me with struggling to not make a total mess of myself. 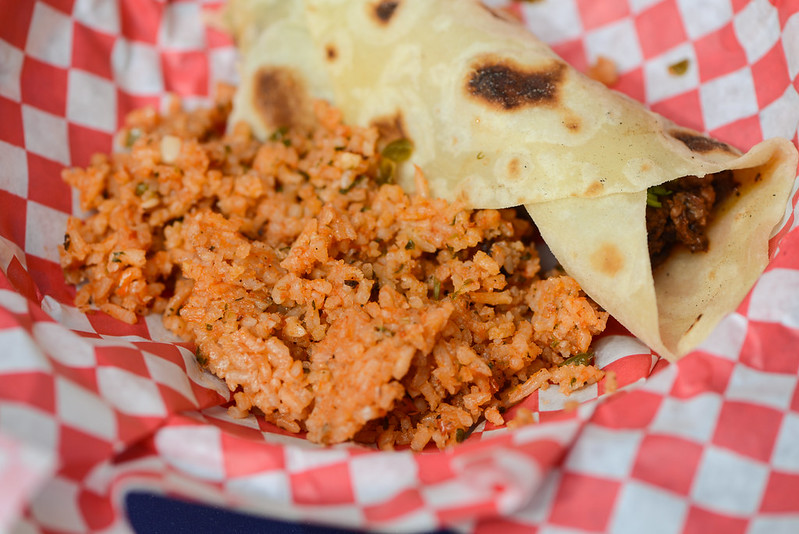 A Mexican feast called for an entire pot of Mexican rice. The first recipe I ever tried for this style of rice cooked with tomatoes and onion was from Cook's Illustrated many, many years ago. It was so perfect on the first go-round that I've never had a reason to try making this rice in any other fashion. I did, however, sub in vegetable stock for chicken stock to make it vegetarian-friendly and I honestly think it just made the rice all the better. 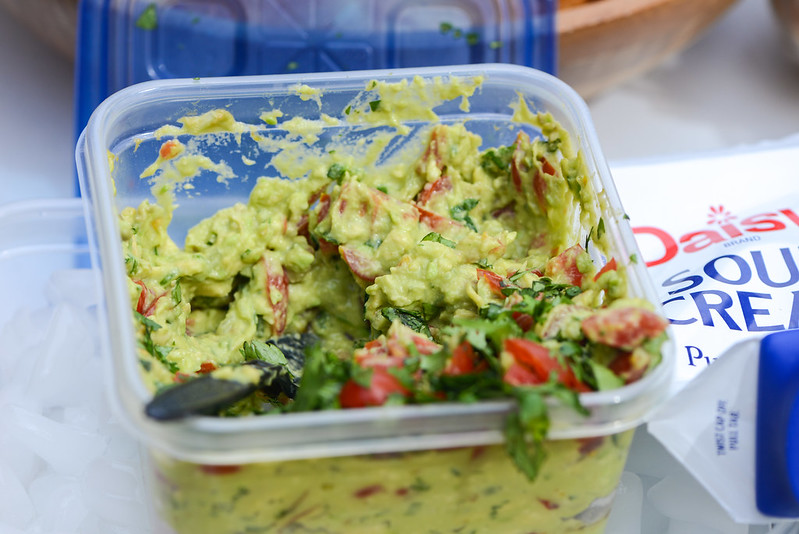 Salsas and dips abounded at this event. Kim brought along a killer guacamole for all to share. I had also mixed up a salsa verde, pico de gallo, and a roasted corn salsa as options that would hopefully make everyone in attendance happy. 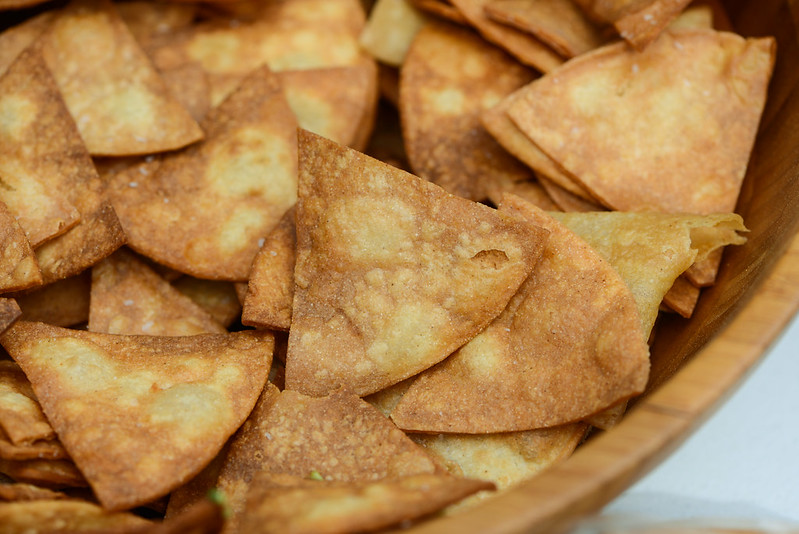 And where there's salsa, there has to be tortilla chips. I fried up a large batch a couple nights prior to the feast. I had gone to one of my local tortillerias to procure some fresh tortillas for this purpose, but those ended up frying up to be way too greasy with an overly intense corn flavor. Not wanting my guests to be turned off by oily chips, I reverted back to usually soft white corn tortillas I can get at any supermarket, which I think make for some pretty perfect chips. 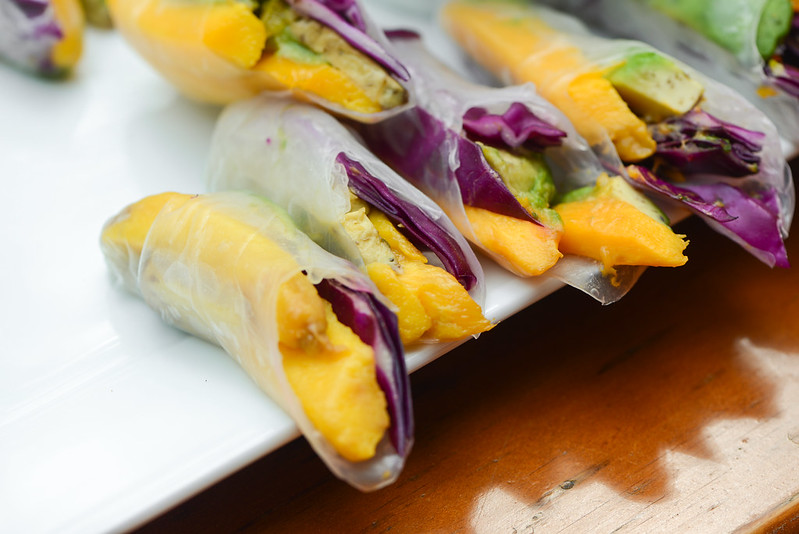 Kristin made one of her favorite Meatwave items—mango summer rolls. These bring together fresh mango, avocado, and red cabbage rolled in a Vietnamese rice wrapper and served alongside a cilantro-heavy sweet chili sauce. They're always a hit, simple to make, and provide a nice contrast to the heavier, meatier items that dominate the menu. 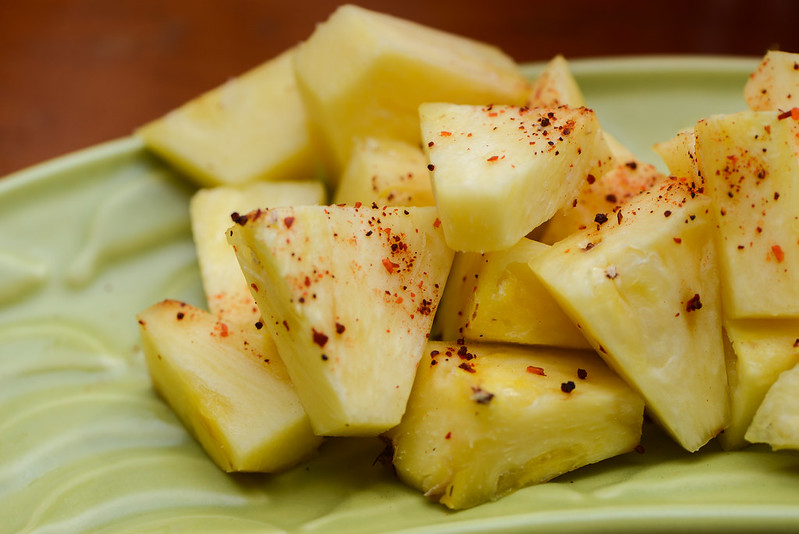 Kristin also bought a pineapple, put half in a pitcher with soda water for a refreshing beverage, and diced up the other half and sprinkled with chili seasoning. A nice balance between sweet and spicy made these fit in with the theme very well overall. 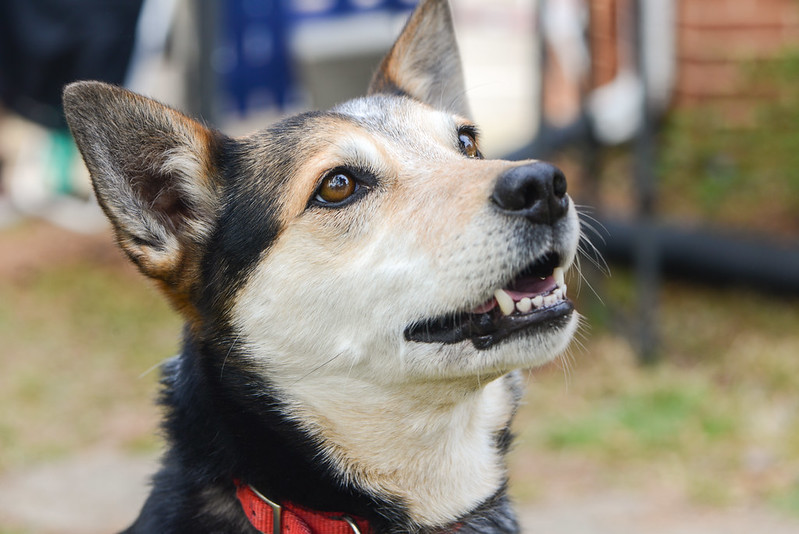 I know I'm not supposed to play favorites, but I'm going to start off the roll call for this Meatwave with the guest closest to my heart—Betty. Betty is an exemplary companion and I cherish my time with her. At the end of the day we played a good game of frisbee where she tired me out first, despite no need for me to exert much energy at all. 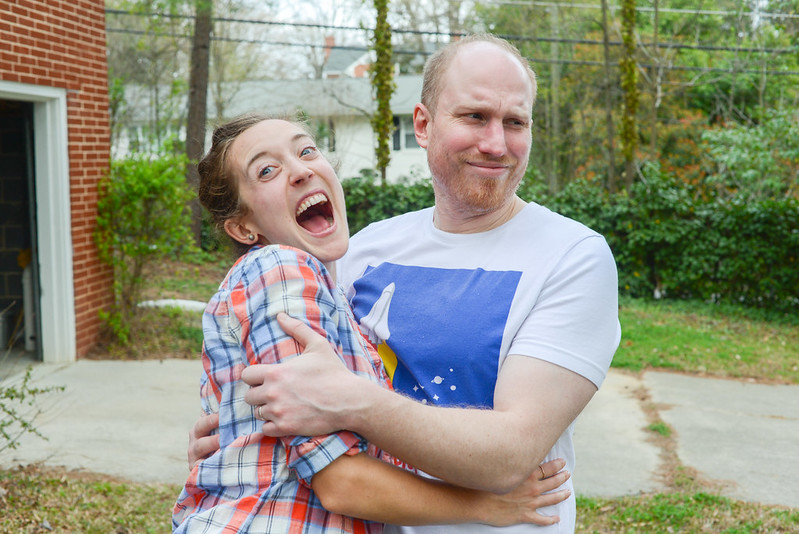 We were happy to welcome two new Meatwavers this time—Amy and Dan. They're our awesome next door neighbors we met back in December, and now that the barbecues are back in full swing, we hope they'll venture over to the other side of fence for these shindigs frequently. 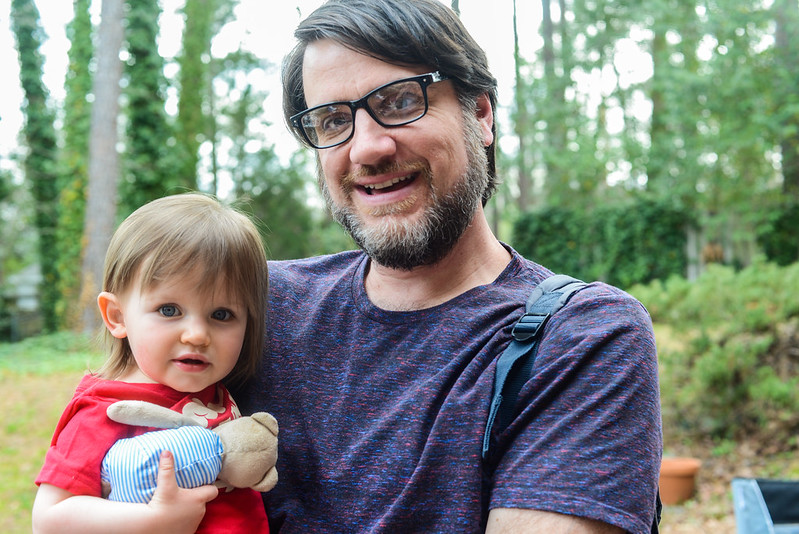 Next up are the dynamic duo of Lindsey and Alice. Alice discovered our hoop chairs in the basement and liked to climb in and strum the strings like a guitar, so cute. 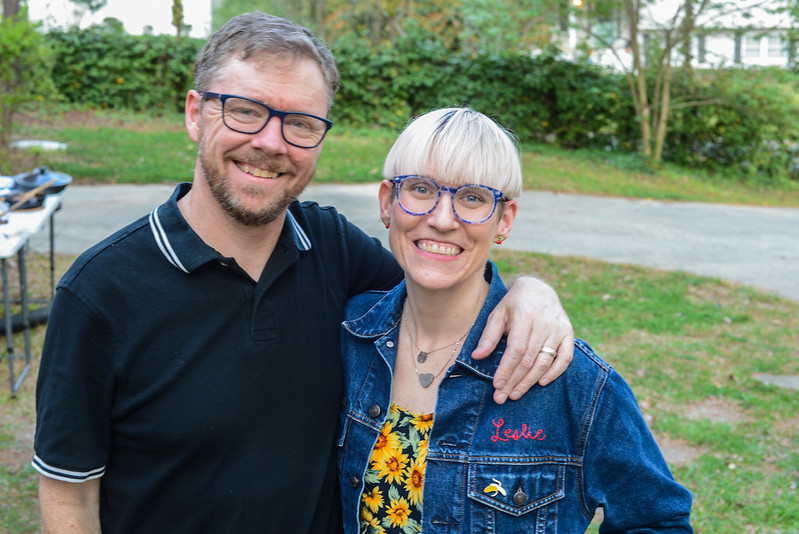 And without fail, Leslie and Steve were here, keeping up their perfect attendance streak. Steve also saved the day by running out and getting up bolillo rolls after I discovered, only after guests had arrived, that the ones I had on hand had molded. 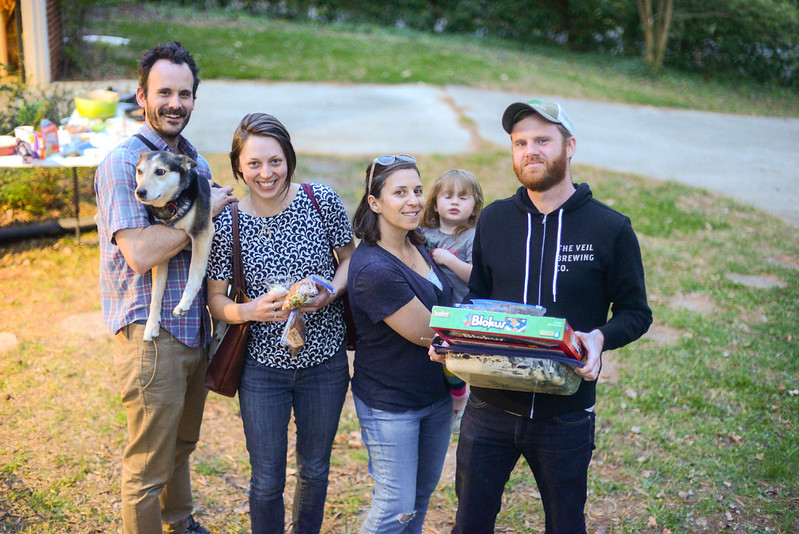 And after the sun had set, I got this photo of Evan, Meredith, Jenny, Annabel, Bryan, and Betty (the dog so nice she gets called out twice). One thing I was reminiscing about from the New York days was how Meatwaves had waves of people and lasted from 2pm until well after sunset. With a smaller crowd here in NC, it makes sense that it's a more abbreviated affair, but sitting outside with a beer and friends as the day turned into night sure felt good. We have some upgrades planned to the Meatwave space to make it a better nighttime hang spot, so we hope with the proper atmosphere, we'll start having some of these more prolonged affairs, because really, you can never have enough Meatwaving.