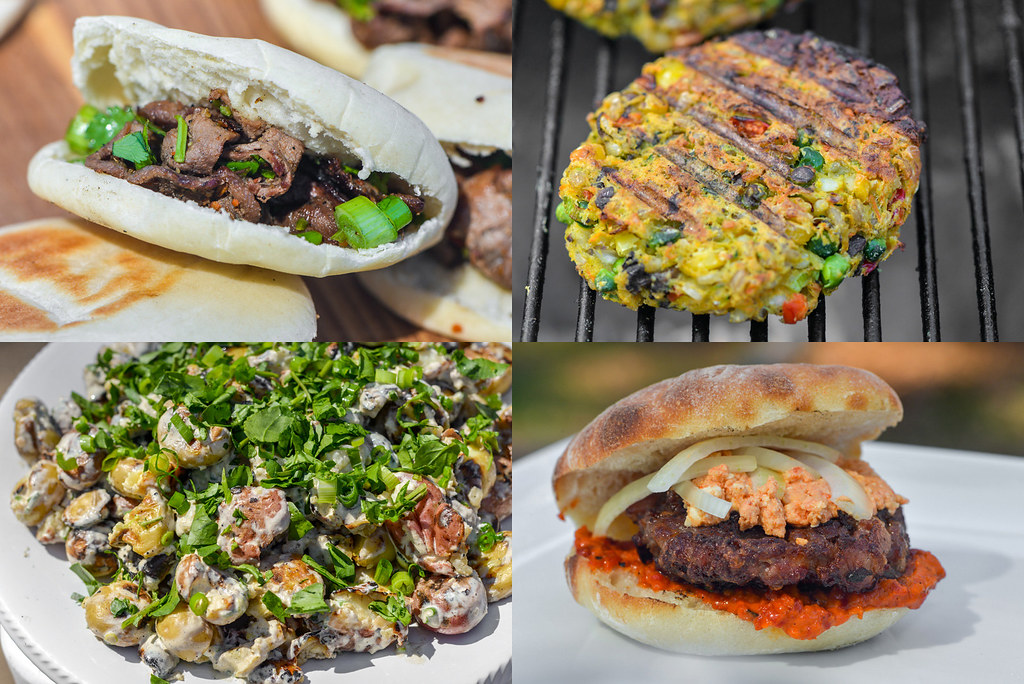 I feel like I was itching to get the Meatwave going in 2019 way more than most years. This was a little odd because, in reality, the gap between 2018 and 2019 was the shortest yet with just over three months separating the two seasons. But those three months felt hella long because they were filled with almost non-stop rain and/or cold, forcing longer-than-usual indoor periods which kept me from grilling and had me resorting to pulling from recipes I made many, many years ago to fill content gaps in the blog. I wasn't alone in this restless feeling—this Meatwave brought out quite the crowd of folks, all ready to escape their winter fortresses and mingle and bask in the meat once again! 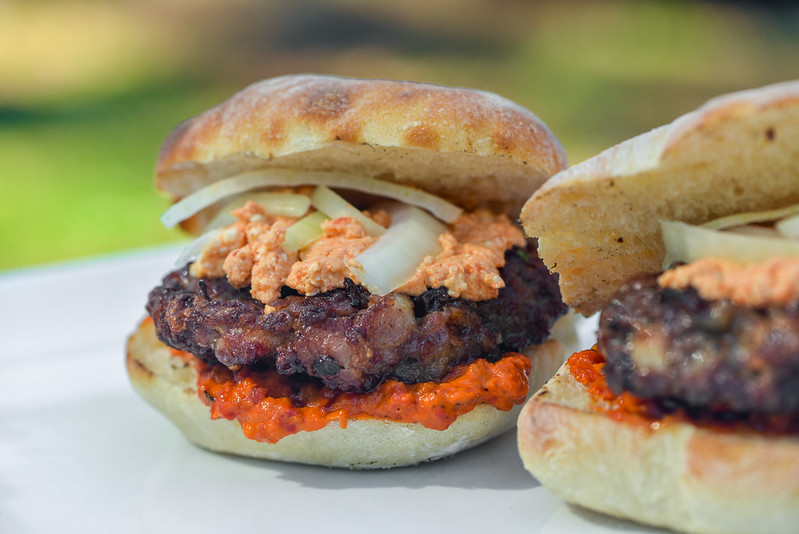 I was actually in New York for work in the days leading up to this Meatwave, so my shopping and prep time was severely condensed from normal, and when I need to put a cookout together in short order, I often turn to the staples of hot dogs and hamburgers. I focused on the burger side of that this time around, but I wasn't feeling fulfilled with going with the classics and ended up creating a menu of all different burger varieties, none of which utilized a standard bun. The piece de résistance for me were these pljeskavica, or Serbian burgers. The beef mixture was lifted up by bacon, cheese, onion, and hot paprika to make it taste very different than your standard burger. I then made burger-sized lepinja (Serbian bread) from scratch for the buns and used ajvar (roasted red pepper spread) and urnebes (spicy cheese spread) as toppings. If you haven't had all of these things before, it might be hard to imagine what this tasted like...but it was amazing, which is why I can't wait to share the recipe soon. 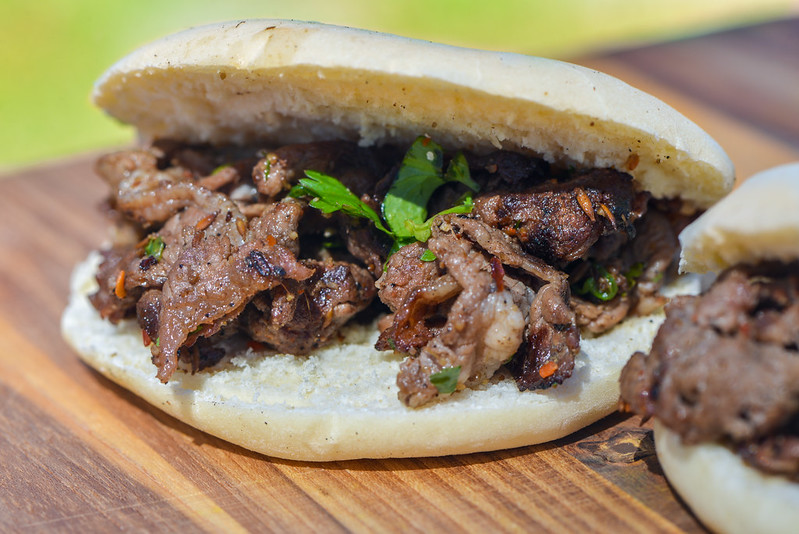 The next burger in the line-up was even more unconventional—Xi'an-style cumin lamb burgers. I have an affinity for this type of earthy and spicy lamb that's a mixture of Chinese and Middle Eastern cuisines. I normally enjoy it with hand pulled noodles, but it was great in burger-style too, stuffed into Chinese-style buns I also made from scratch the day of the Meatwave. 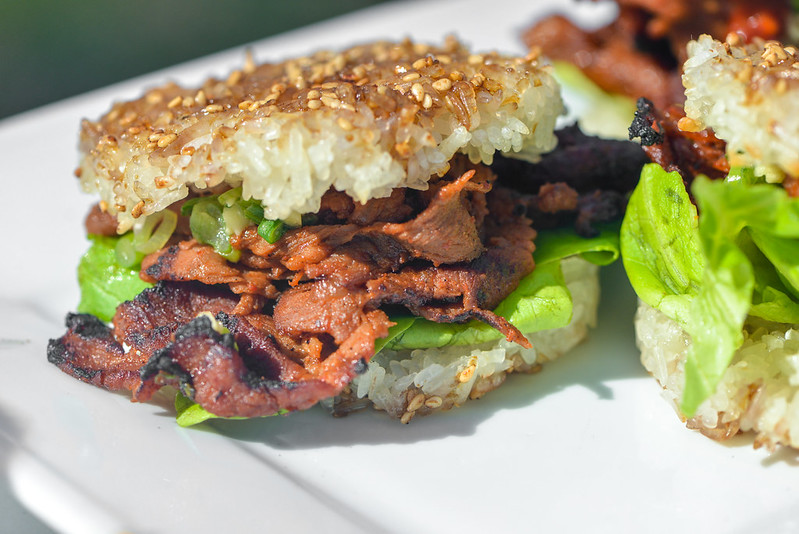 I think this next entry was the most talked about of the day—Korean barbecue rice burgers. Yup, that bun here is made out of rice, sticky rice to be exact, that I formed into a bun shape and then grilled, brushing with a soy sauce, sesame oil, and sesame seed mixture. Between those two "buns" went spicy pork bulgogi, bibb lettuce, ginger-scallion sauce, and a spicy gochujang sauce. If you didn't think Korean barbecue could get any better, you have yet to try it stuffed between two crispy, yet also soft, rice buns. 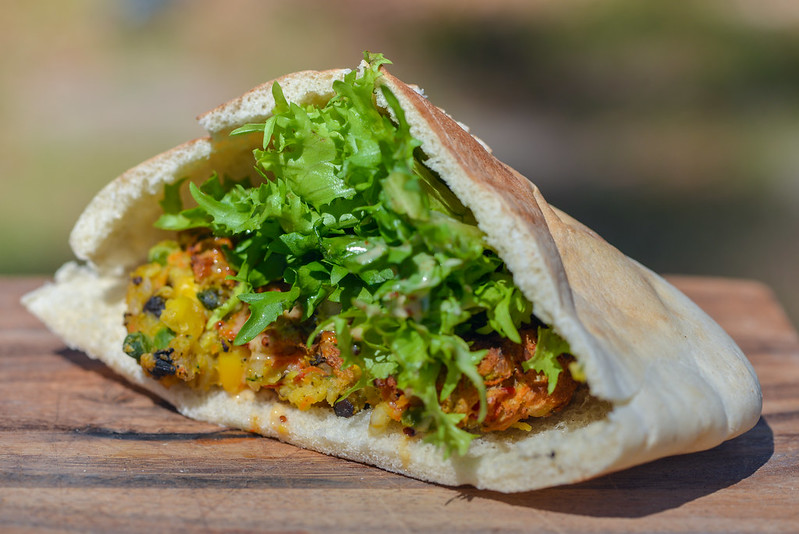 For the vegetarian crowd, I tried my hand at making a favorite from my old neighborhood of Astoria—Sparrow veggie burgers. While I stuck to the excellent beef burgers during my times at Sparrow, I knew the veggie burgers were beloved, and because the burger was documented in Diners, Drive-ins, and Dives, I was able to come up with an approximation of their recipe that grilled up well and was super flavorful and satisfying. 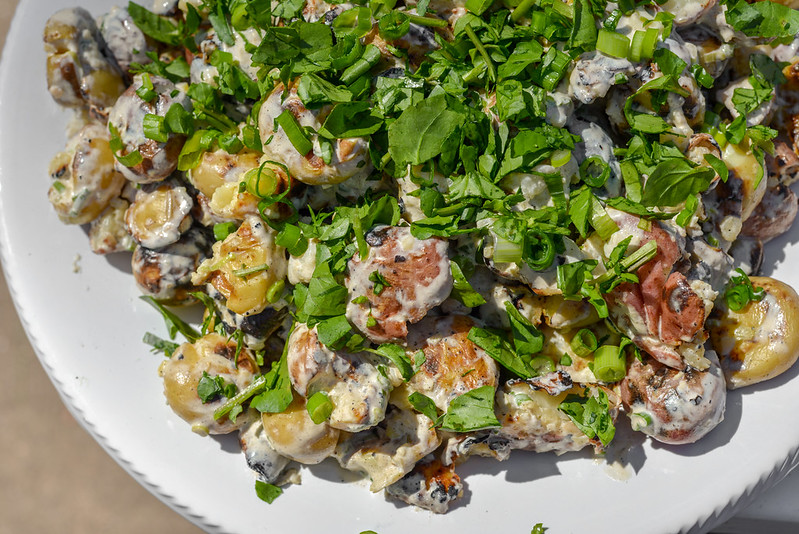 This Meatwave was held on St. Patrick's Day, and while I thought about doing a menu themed to the holiday for a minute, I gave up the idea, but held onto a notion of making a potato salad that I thought would be appropriate if I went the festive route. This was a smashed potato salad where I boiled the spuds first, then lightly smashed them before grilling and dressing them. Although the final recipe really ended up being nothing from Irish tradition beyond the use of potato, this side was a fitting for the overall menu and was well received. 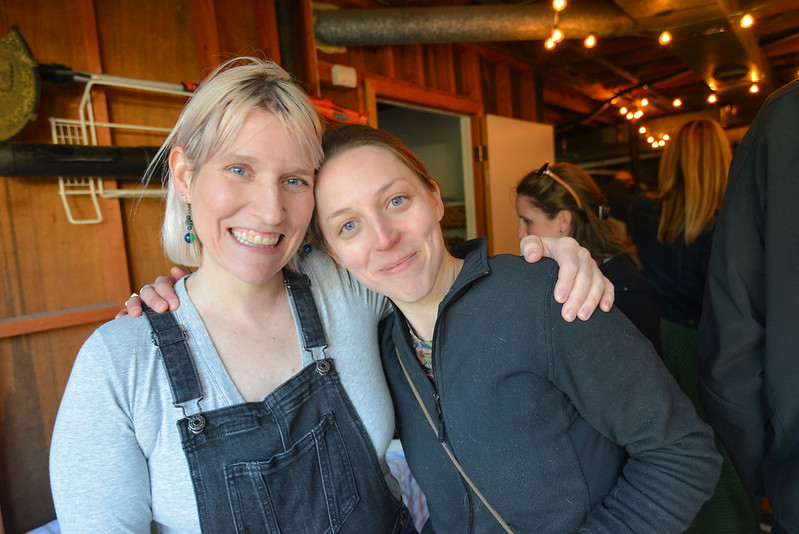 I started slacking on my photos of guests toward the end of the last Meatwave season, and continued the trend at the start of this season. We had a huge gathering of about 30 folks, but I only stepped away from the grill and took photos of all the great people who made it out when the crowd was already thinning. We had a good mix of new and old faces though, starting here with die-harders Leslies and Meredith. 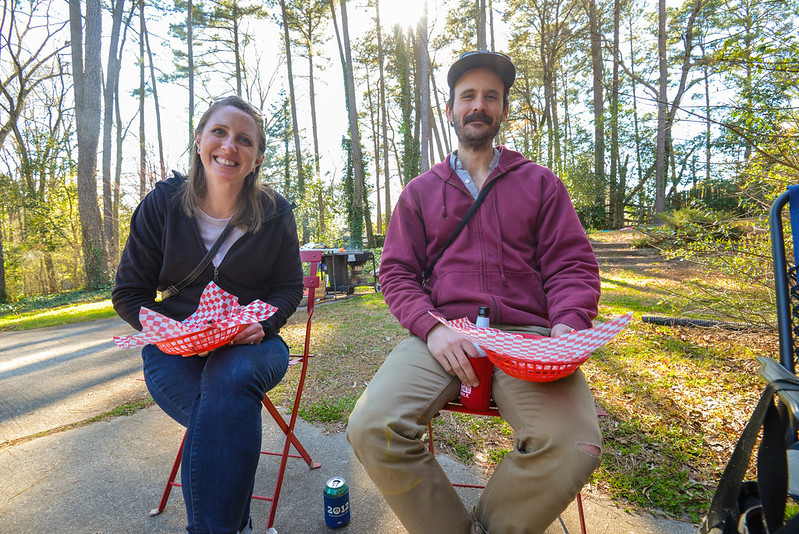 Meredith and Evan also brought along out-of-towner Christy, who seemed happy to be able to partake in the festivities. 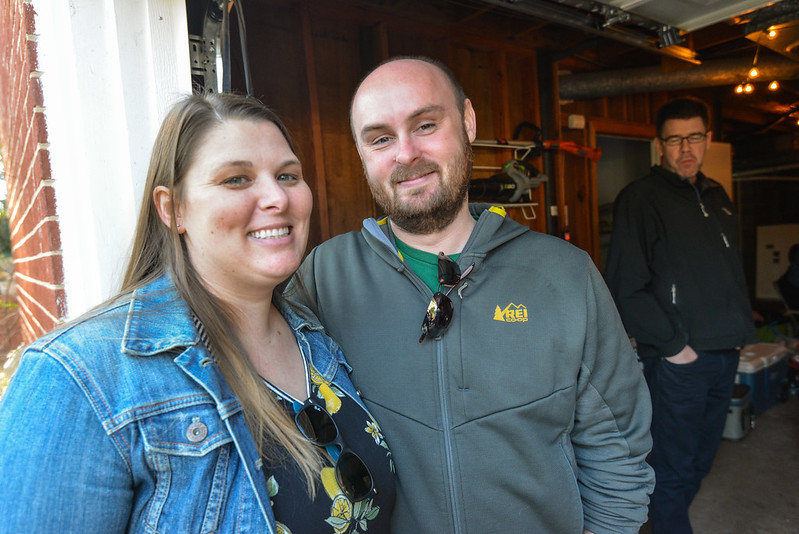 Next up we have the familiar faces of Juliana and Ryan, who, unlike me, did bring a bit of Irish to the day with a homemade loaf of soda bread. 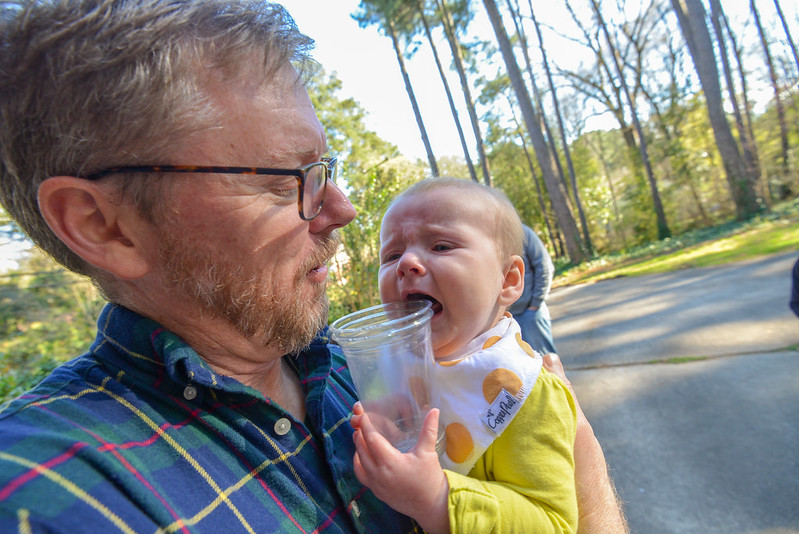 Only eight months old, Brooksis already a Meatwave two-timer. She's not happy about something here with daddy Steve, but I'm attributing that to teething and not due to any Meatwave-related reason. 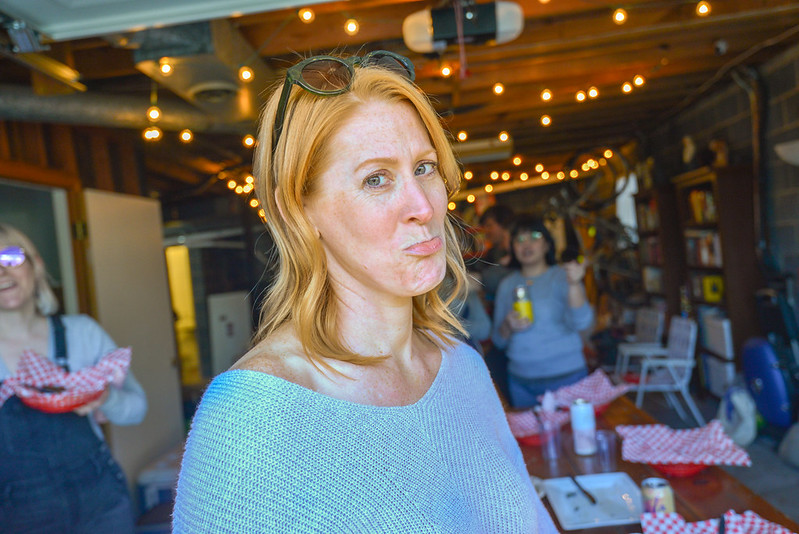 A crying Brooks did make Lindsey sad though. 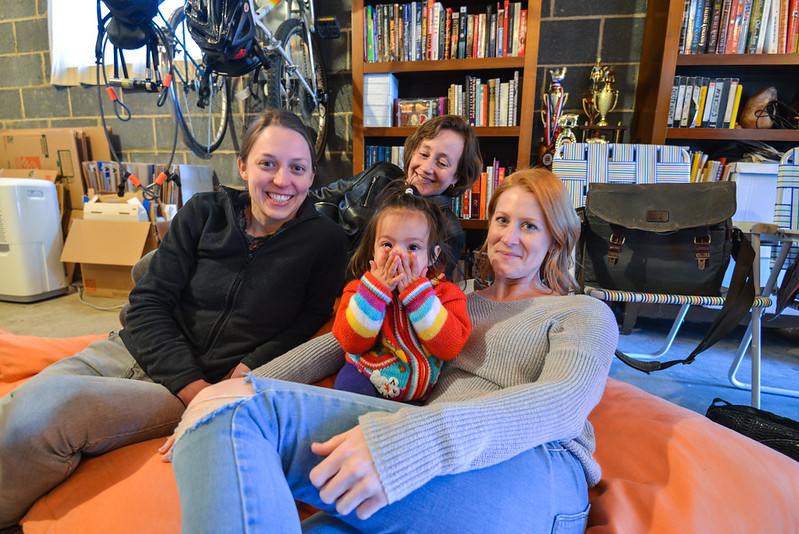 But she found happiness with happy toddler Anika! Anika stole the hearts of many this day, as she can be see doing here with Alison, Meredith, and Lindsey. 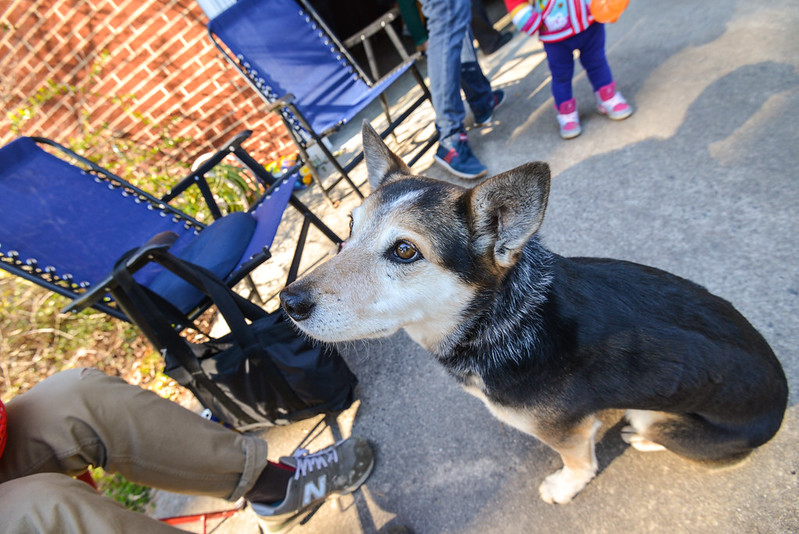 And last, but not least, Meating Expectations saw the return of my favorite canine—Betty! All-in-all this ended up being one of my favorite Meatwave kick-offs of all time, and that's saying a lot now that we're in our 16th year. Hopefully that means the best is still to come and I can't wait to keep cooking, keep sharing, and continue the good times the Meatwave is all about for another summer.