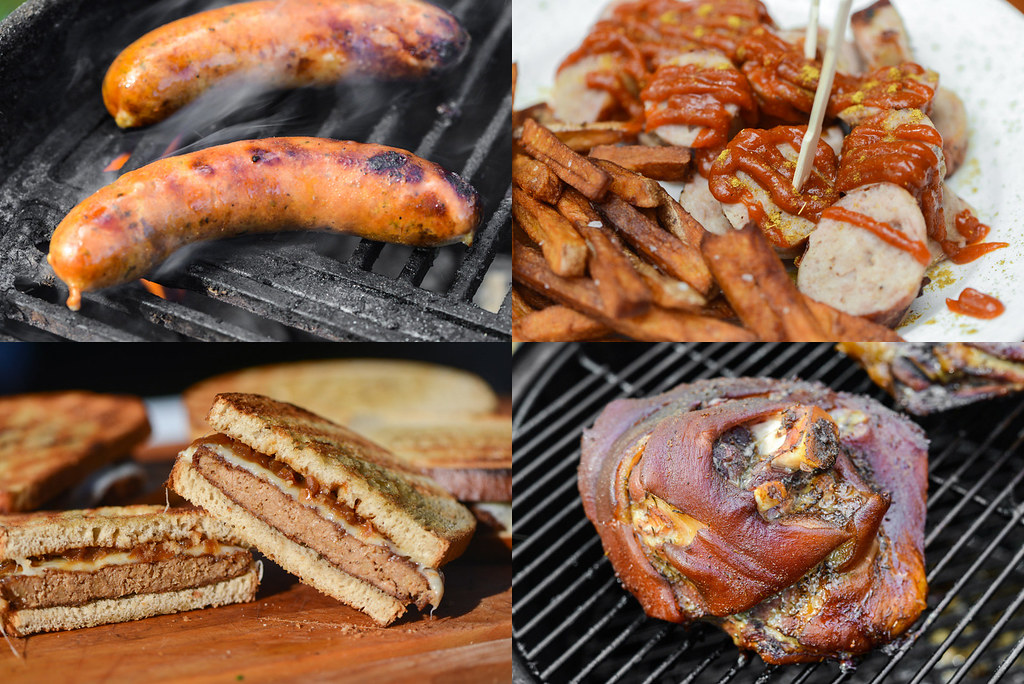 It's always hard to say goodbye to the Meatwave for the season, although in North Carolina it's a little bit easier knowing that a stray warm day in winter can mean we don't have to wait until spring to get our fix once again. Still, I wasn't taking any chances on that and to close out the 2017 season, I cooked up a huge meat feast that paid homage to the eats at Oktoberfest. This meant lots of pork in lots of forms—wursts, roast shanks, chops, and more. It was certainly enough to fill you up and get in an unhealthy intake of meat and fat before the winter sets in. 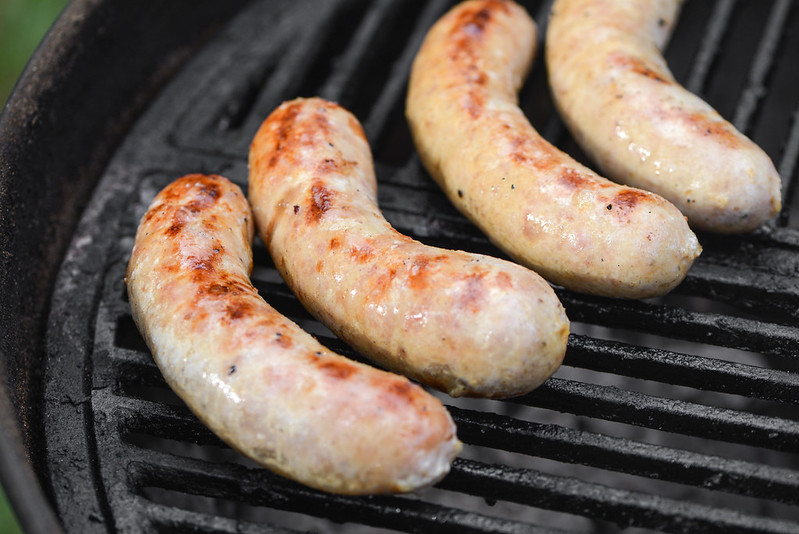 What would a German-inspired menu be without sausage, and in particular, without bratwurst? This was my third crack at making bratwurst, and you know what they say, the third time's a charm. That was definitely true here with brats that were well spiced, extra juicy, and had a great emulsified texture. It wasn't luck though that got me to some pretty stellar specimens, but lots of a trial and error that has taught me how to put together and stuff sausages for success. 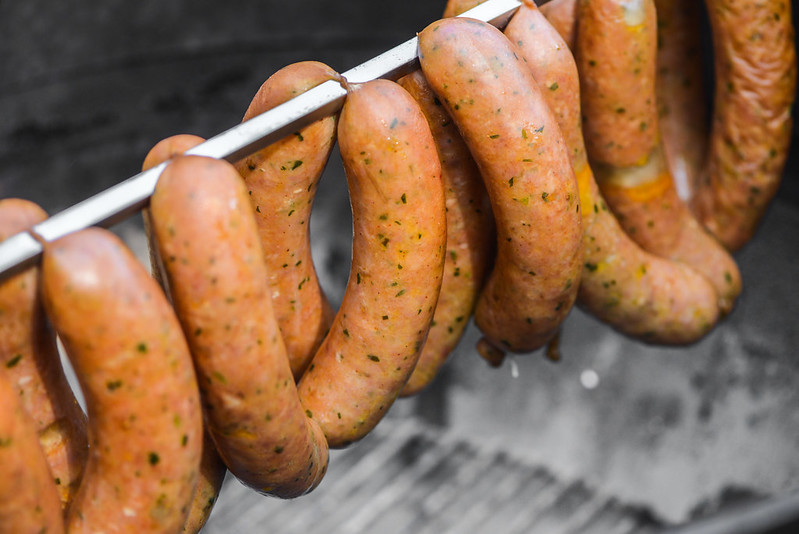 One wurst certainly wasn't going to be enough, so I also made these bockwursts as well. Like bratwurst, they're a mixture of veal and pork, but lean more heavily on the veal and bring some fresh herbs into the seasoning mix. I also smoked them prior to grilling, giving them a more robust flavor than the brats. 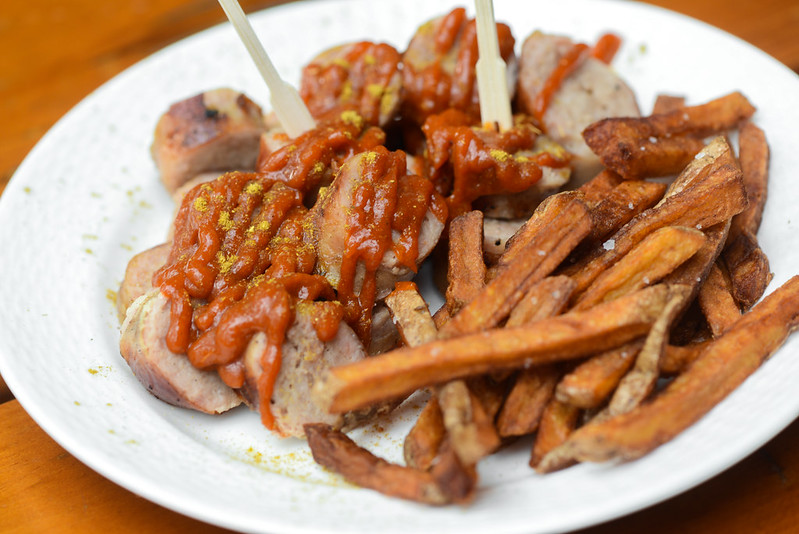 I figured while I had fresh brats on hand, might as well turn some of them into currywurst. I've made the curry ketchup required for this dish from scratch before, but took a simpler approach this time by just mixing ketchup with a few spices, which turned out a really excellent condiment that went well with the more lightly spiced sausages. 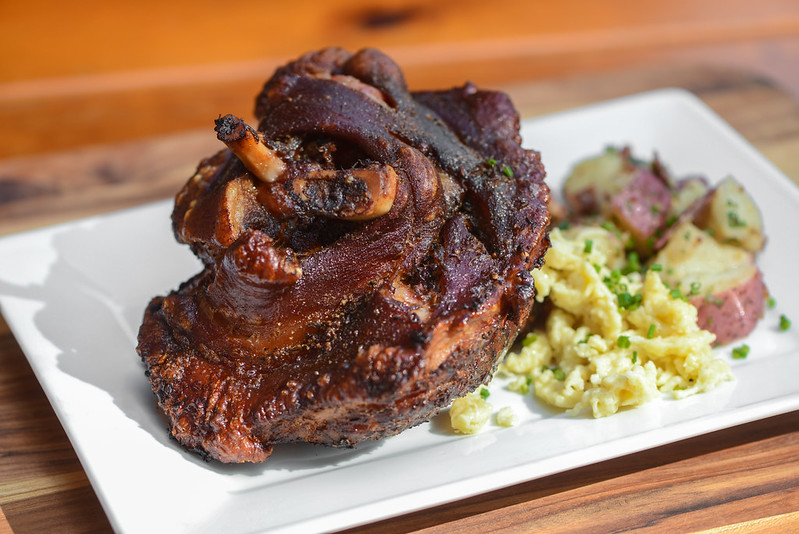 After being totally taken with the smoky, crackling skin of a smoked porchetta I made earlier this summer, I've had a craving for a repeat. I found a way to get that in, along with a new recipe, by making schweinshaxe. To make this traditionally roasted dish, I slow smoked pork hocks until tender, then crisped them up using the rotisserie over a hot fire. They ended up having everything I wanted—super crunchy skin with a nice layer of fat underneath along with juicy meat. 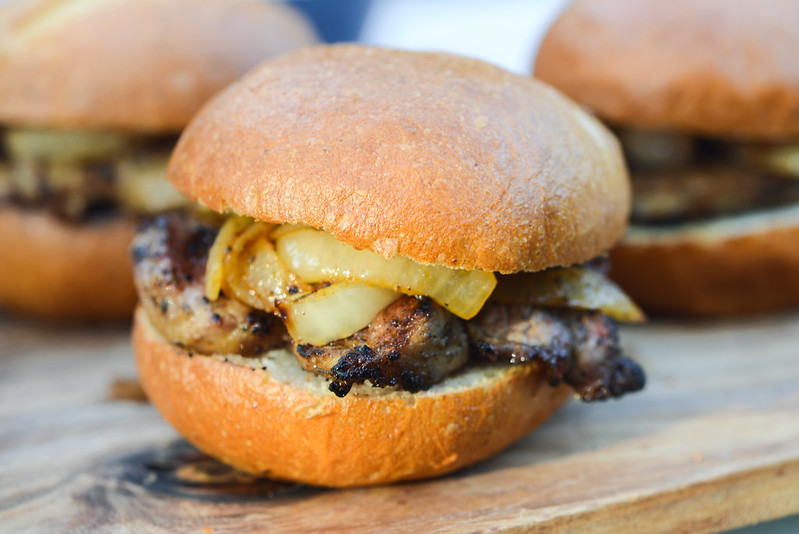 Last in the meat roll call were these schwenkbraten sandwiches. They were comprised of pork chops I cut from a pork shoulder that were marinated in a mustard-based sauce before being grilled. I then placed the chops on toasted kaiser rolls with some onions from the marinade that I had softened on the grill. This all came together in a great, very savory little sandwich. 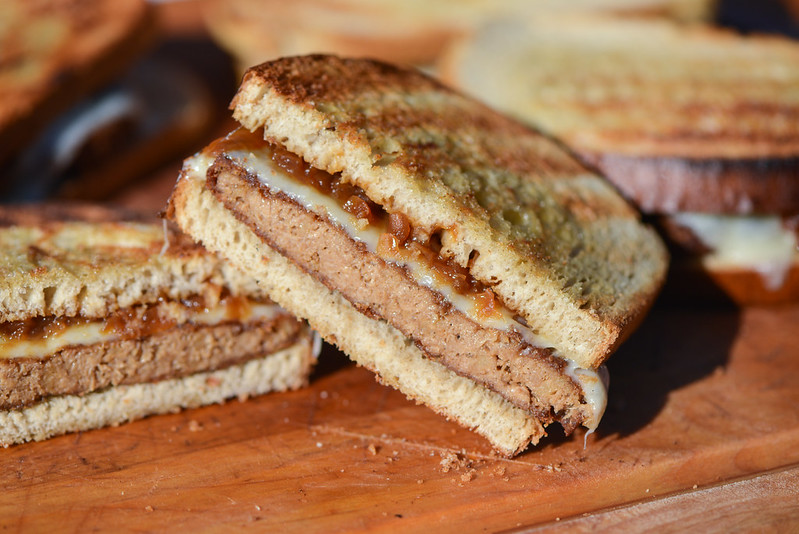 This was definitely a more meat-centric menu than I've been doing of late, but not to leave the vegetarian crowd without a proper, hearty option, I made these veggie burger patty melts. I used the standard frozen veggie patties here, but married them with caramelized onions and Swiss cheese on toasted rye to make something better than standard veggie burger fare. 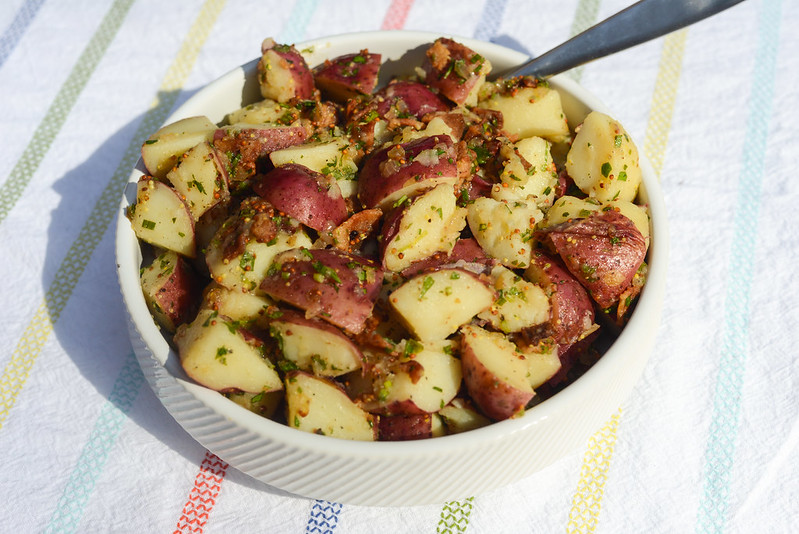 To start off the sides, I put together a German potato salad. It had been a while since I made this recipe and forgot how great all that bacon (and bacon fat) make this warm accompaniment. It definitely fit into the menu perfectly, although offered no reprise from the overall heaviness. 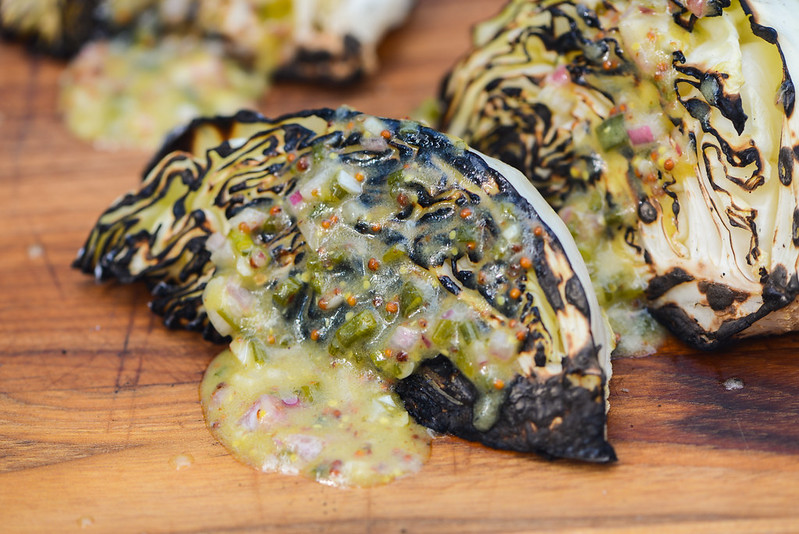 To get that, you had to look to this grilled cabbage with a mustard vinaigrette. Grilling cabbage is my number one way to enjoy it, and I've found it's also a blank canvas for countless additions in flavor by way of a dressing. The slight spice and tang of the vinaigrette here added to a growing list of great ways to finish off some crisp-tender grilled cabbage. 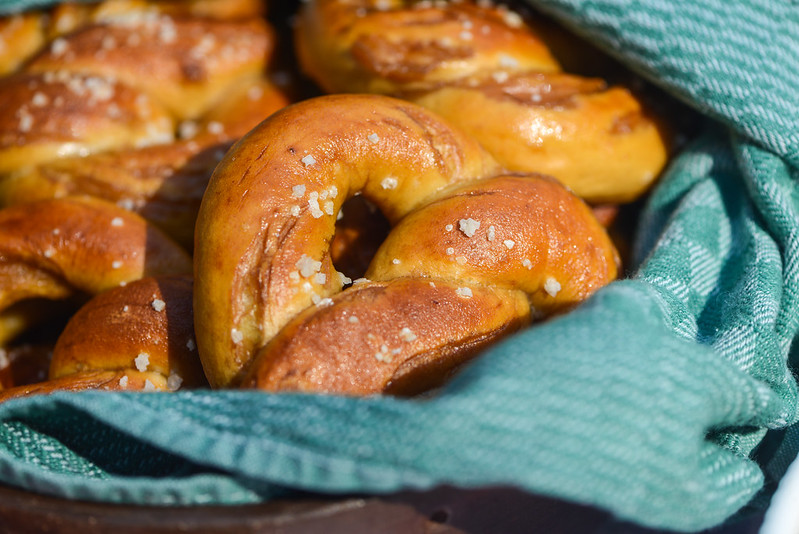 I had planned on just buying some pretzels and warming them on the grill, but Kristin jumped and made them from scratch instead, along with a beer cheese for dipping. I've never been 100% happy with my homemade pretzels, assuming I really needed lye to get the right flavor. Kris found out though that if you bake your baking soda, it increases the alkali, enough so that you get way closer to the results when using lye. Needless to say, these were some of the best homemade pretzels I've ever had. 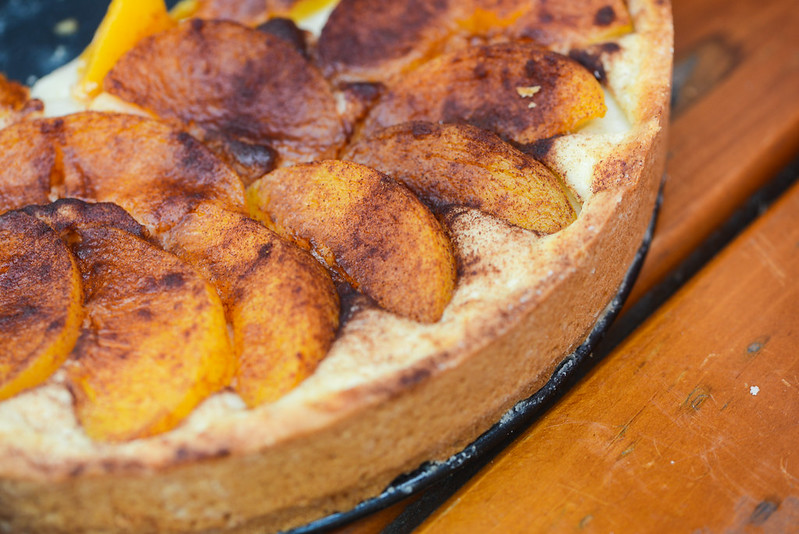 Moving onto desserts, my Mom got into the German theme and brought this lovely peach kuchen. 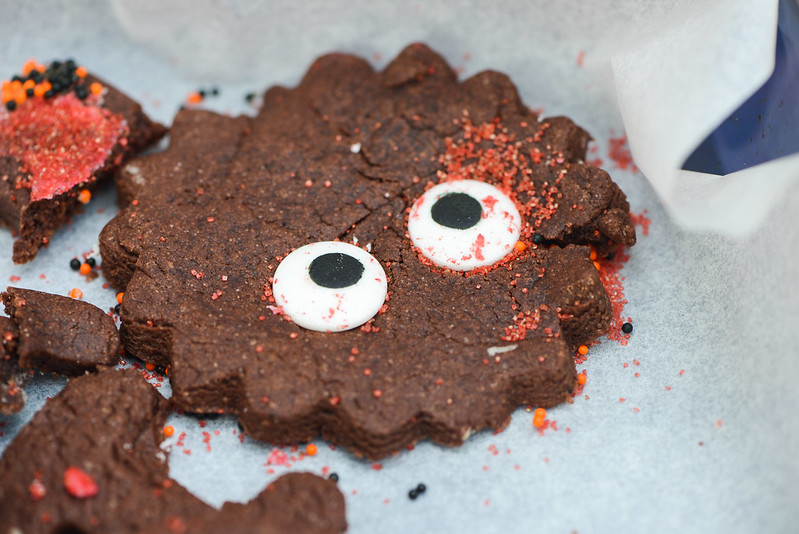 Bneji took the leap from Oktoberbest into Halloween with these soft and chewy chocolate cookies decorated as cute little monsters. 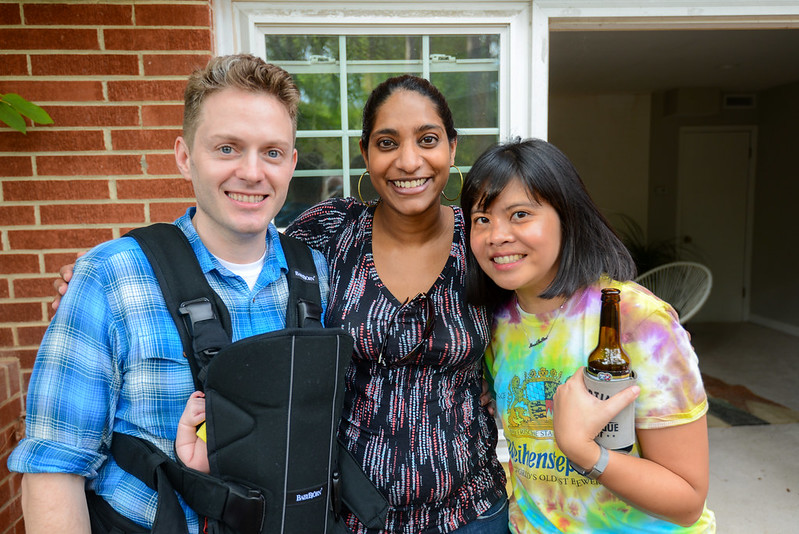 And now moving into all the people who made this Meatwave so awesome, we start, rightfully, with the newest, and perhaps youngest ever Meatwaver—Anika. She made one of her first trips out of the house with parents Patrick and Rekha, who got to catch-up with Kristin and other friends. 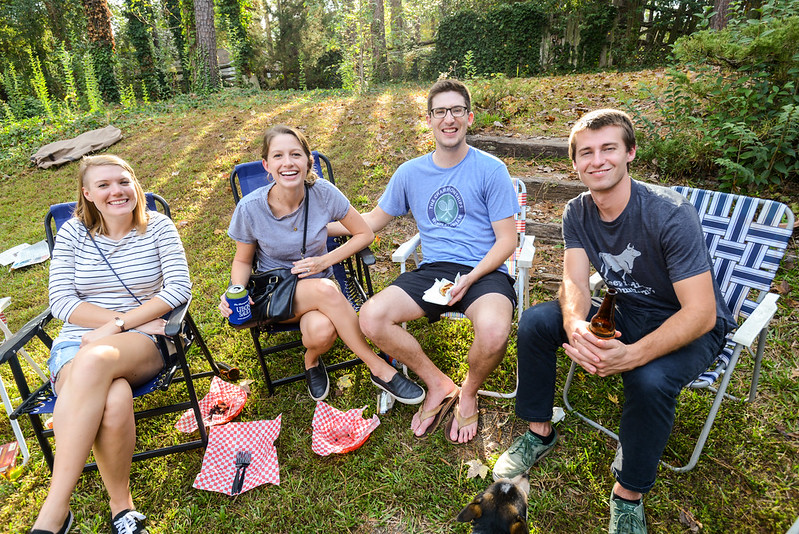 We were happy to have Zach and Maria back this time around. And being great Meatwavers, they brought both booze and new friends (although you have to forgive me for not remembering their names right now). 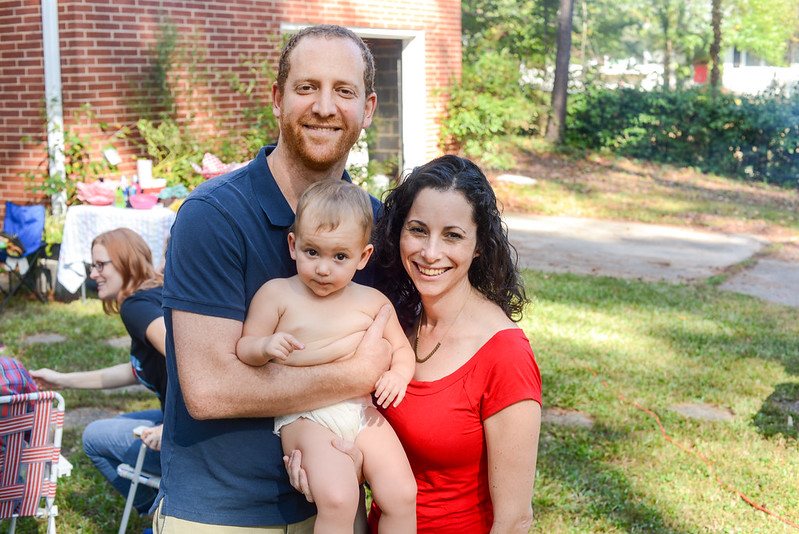 Neko made another trip out, but decided clothes were optional this weekend. Can't quite decide how she's feeling being forced into a photo with mommy Sarah and daddy Gabe, but it certainly shows off one of her great faces. 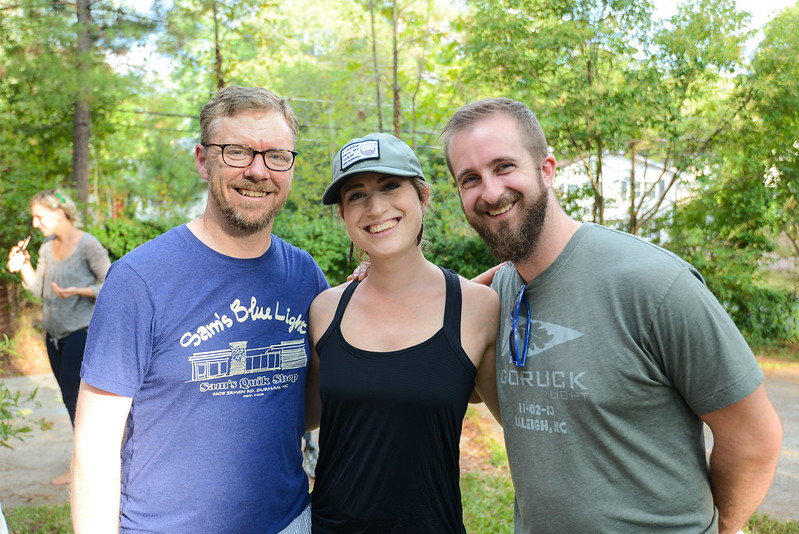 Chris and Aiya heard the call of the last Meatwave of the year and made it out. Also got Steve in here, who made it official with Leslie—they had perfect attendance for the season! 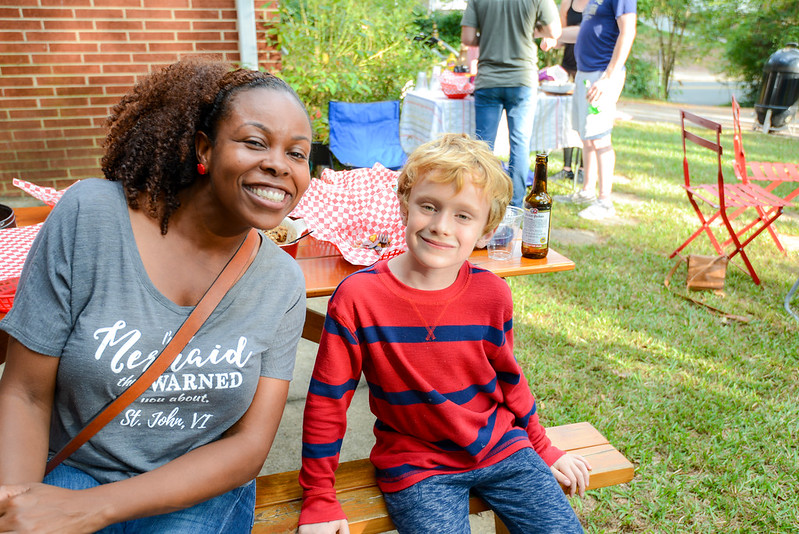 Next up we have Shola and Benji sharing a moment between one of the many, many courses. 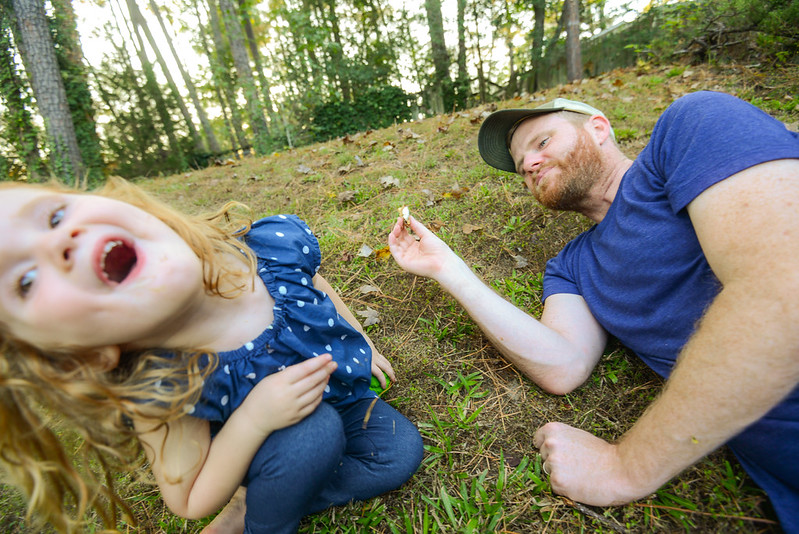 And let's not forget Benji's sister Annabel, having some fun on the hill with Dad (aka: Bryan). 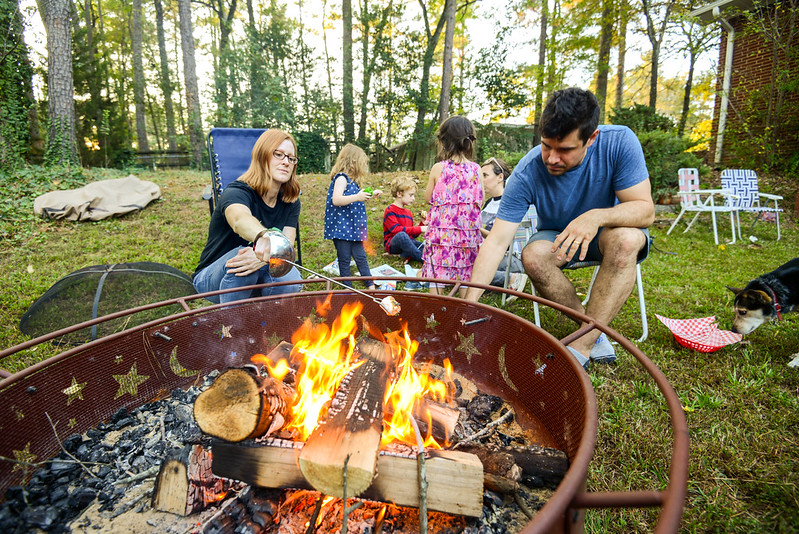 With it being mid-October already, I was hoping for a cool fall night to transition over to a campfire setting, but it was actually in the mid-80s and quite humid. That didn't stop me though, it just meant no one really wanted to sit by the fire unless they really wanted some s'mores, like Lindsey here, or wished to be even more hot and sweaty. 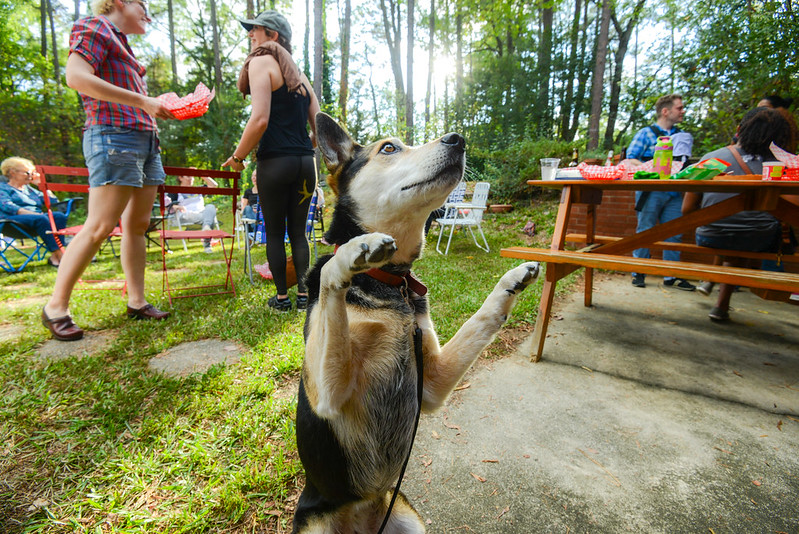 And, of course, I have to end with Betty. I think this is my favorite photo of her from the entire season. 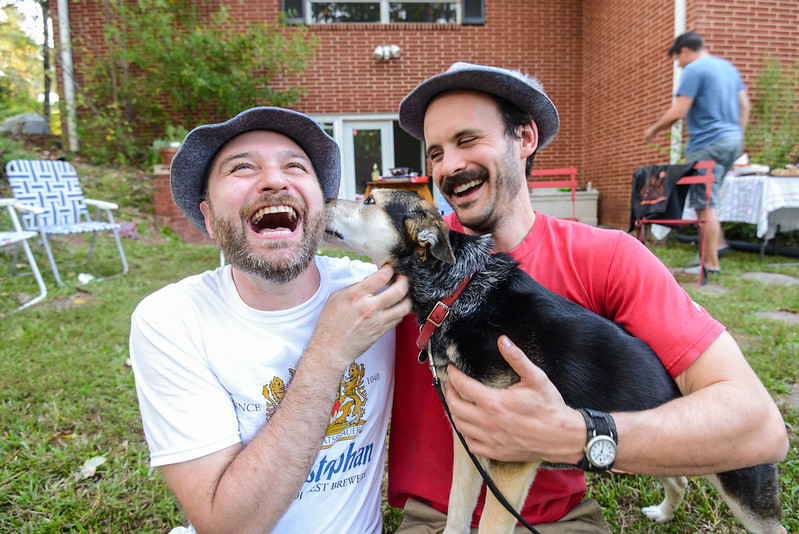 And the day ended with Betty giving my ear a big lick right when this photo was being snapped. It was supposed to be a nice portrait of Evan and myself in our matching Oktoberfest hats, but the pure joy Betty brought on is a perfect representation of a season filled with moments like this. I feel so lucky that in my couple short years in Durham, I've already made such good friends who support my Meatwave efforts, keeping this tradition alive and ready to start up again in 2018 for its 15th season!