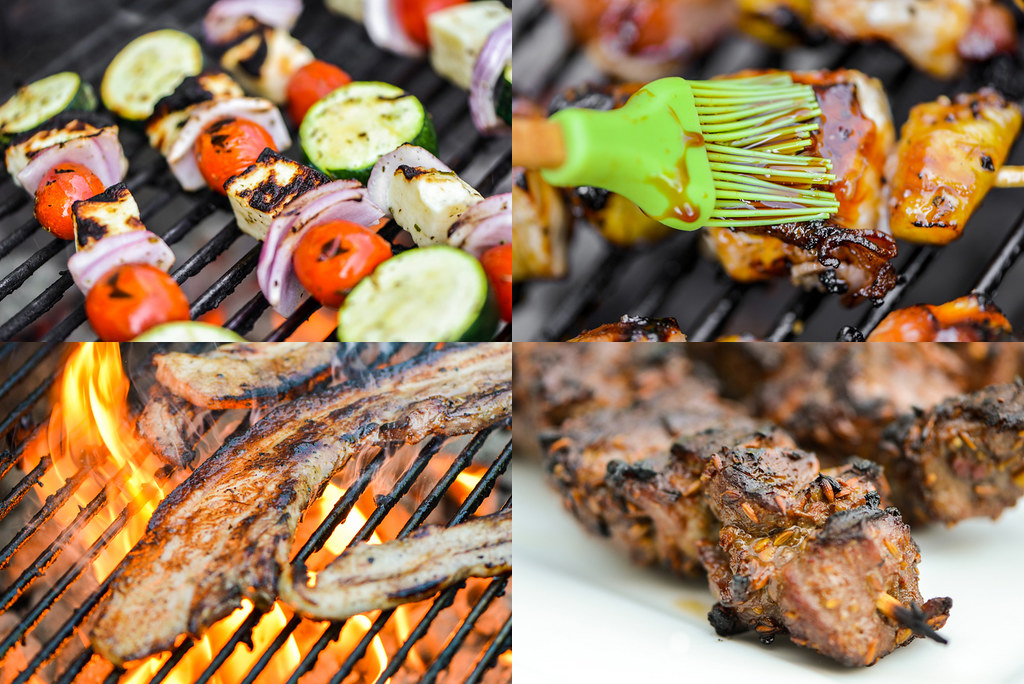 The ten year anniversary kick-off of the Meatwave was a cold and rainy affair that resembled March more than May. Fast-forward two weeks and we found ourselves in the midst of an intense heatwave that felt like we were stuck in the depth of muggy August hell, with a total abandon of those perfectly warm and crisp Spring days that usually start off the Meatwave. Still, that didn't stop anyone from coming out and joining the hunt for the elusive Meatsquatch!—a mythical beast with an insatiable appetite for meat that can never be fulfilled. 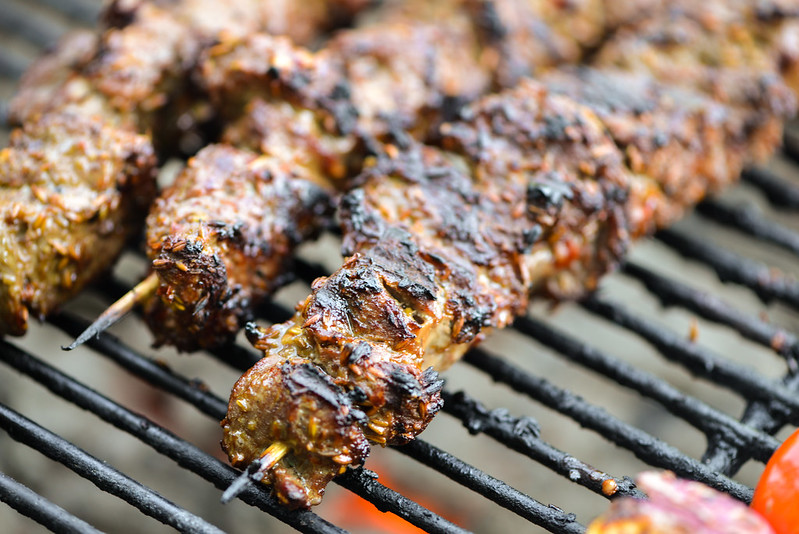 Skewers were the name of the game this weekend, and out of the three that I grilled up, by far these sticks of spicy cumin lamb were my favorite—they were influenced by the cumin lamb noodles of Xian, China. Tender pieces of leg of lamb were marinated in a mixture comprised heavily of cumin and crushed red pepper. The end result was an earthy and incredibly flavorful lamb that was perfectly tender and moist. My mouth is watering just thinking about them. 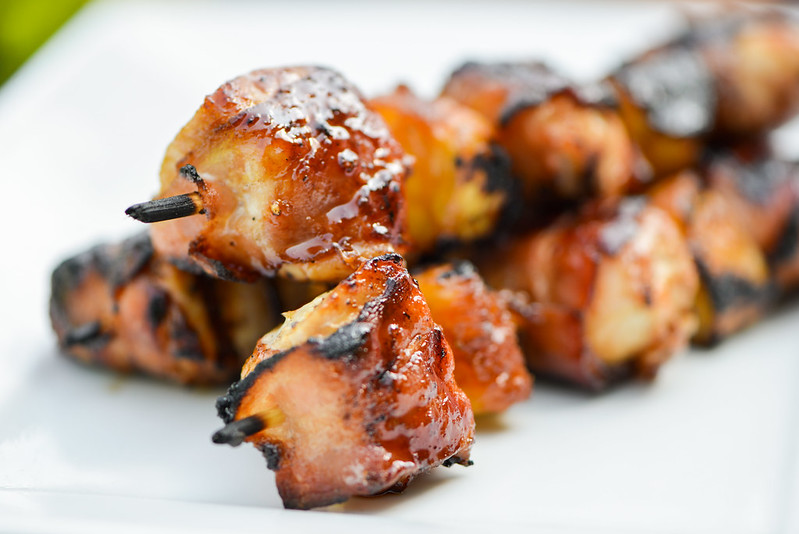 I tend to shy away from chicken skewers, which are all-too-often dry and flavorless. I thought, what is a good way to fix that? Answer, bacon! Brined chicken breasts were cubed and wrapped in bacon, then threaded onto skewers with pineapple. In the last minutes of grilling, they were brushed with teriyaki sauce to give them a great sweet and salty flavor. 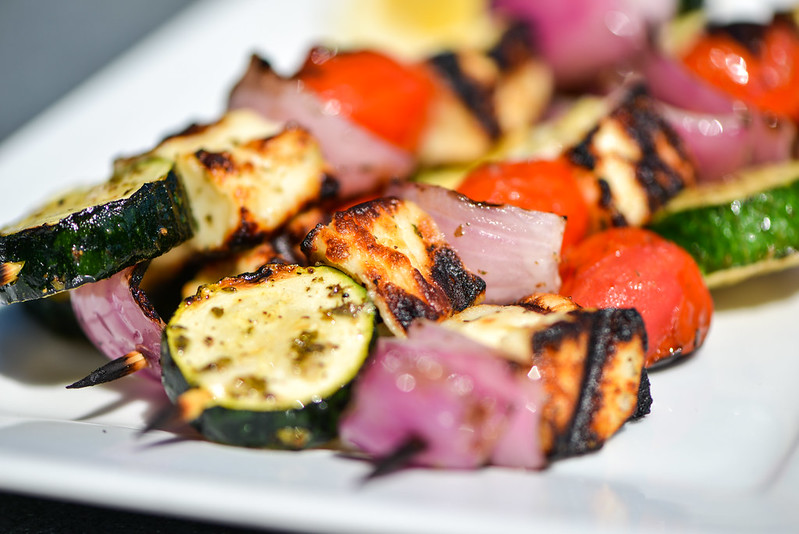 I threw some veggies into mix by way of these halloumi skewers. If you don't know what halloumi is, your life is not complete. Salty and squeaky, this Cypriot goat cheese is made for grilling or pan frying. When it's heated and forms a golden brown crust, it's insanely delicious. I often eat as part of a pita sandwich with red onion, tomato, and tzatziki, which are all the components I brought together in these skewers. 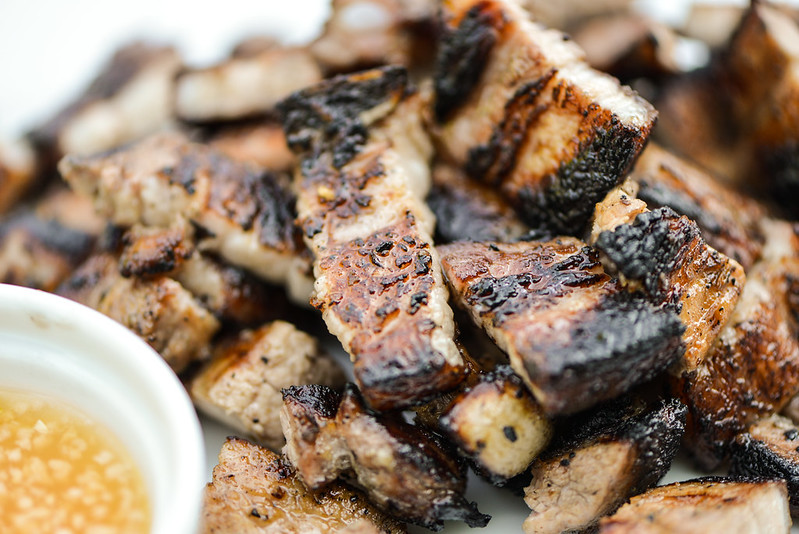 I had intentions to skewer this inihaw na liempo—Filipino barbecue pork belly—to fit the theme of the day, but laziness prevaled and they were grilled sans-stick. The belly was cut into 1/4-inch slices and marinated in vinegar and sugar mixture that encompasses the main flavors in Filipino cooking—sweet and acidic. On the grill they charred up nicely and had a slightly crisp outside with a soft and fatty inside that was a little too addictive (I'm sure I ate way way too much straight up pork fat that day). 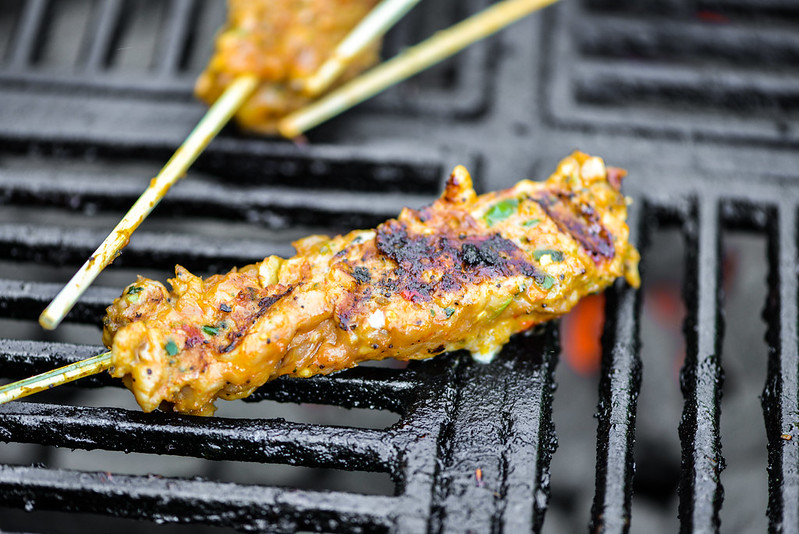 Tyson got in on the skewer theme by bringing chicken keema. I had never heard of this Pakistani creation before, but I instantly fell in love. These heavily spiced skewers were intensely spicy—a direct line to my heart—with an array of other spices to give them a unique character that I'm already working on decoding to make my own recipe for keema. 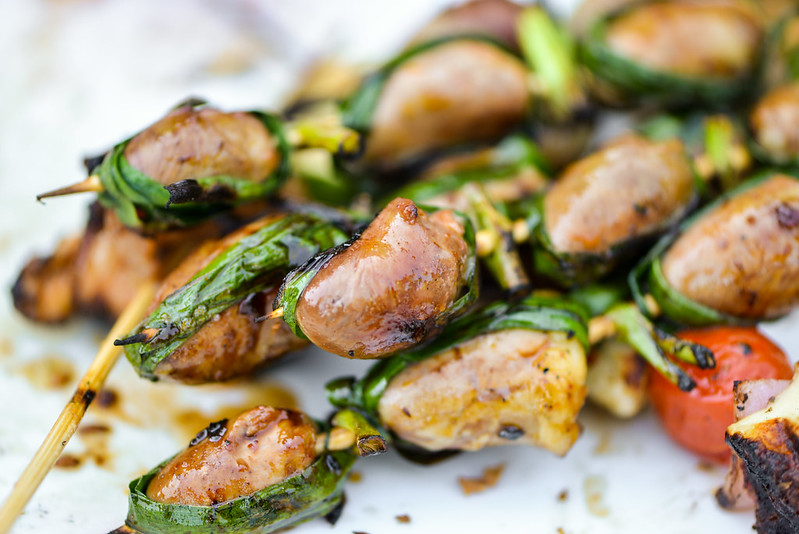 Tyson also brought this creation he dubbed Hannibal Lector's Chinese Delight—chicken hearts marinated in a spicy bean sauce and then wrapped with Chinese chives and skewered. I admit that I'm not an offal fan, and having hearts before and feeling no need to have them again, I did not partake in these. That didn't stop other Meatwavers from digging in through, which garnered compliments on the great spicy flavor these little hearts had. 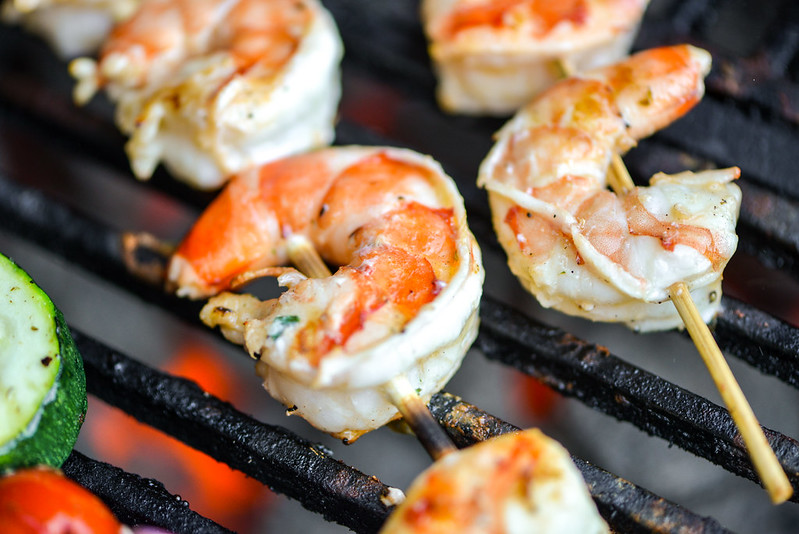 Rachel and Chuck came in tow with tequila, lime, and jalapeno marinated shrimp. Of course the first thing we did was skewer these up to fit in with all the other meats, then quickly grilled them over high heat. 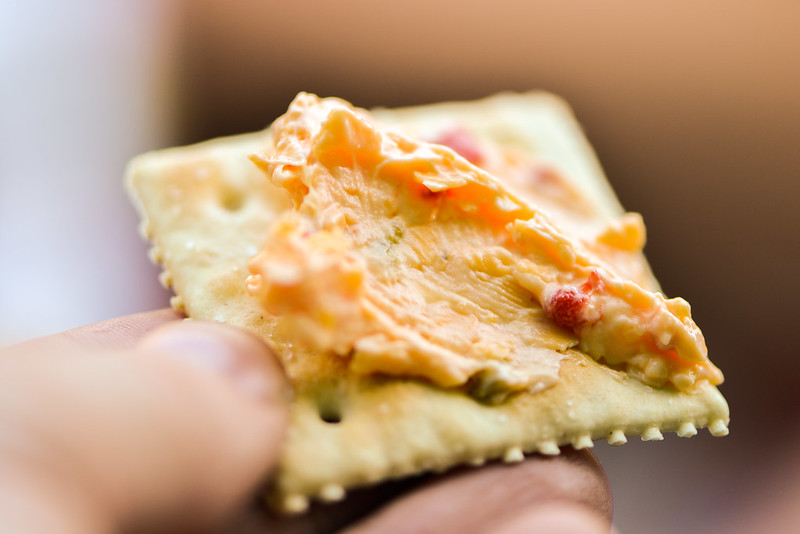 Pimento cheese is another entry point into my heart, and I couldn't mask my excitement when I saw Karla and Craig arrive with an entire tub of it. I took no pause in busting out a cracker and slathering it with this creamy and cheese spread. 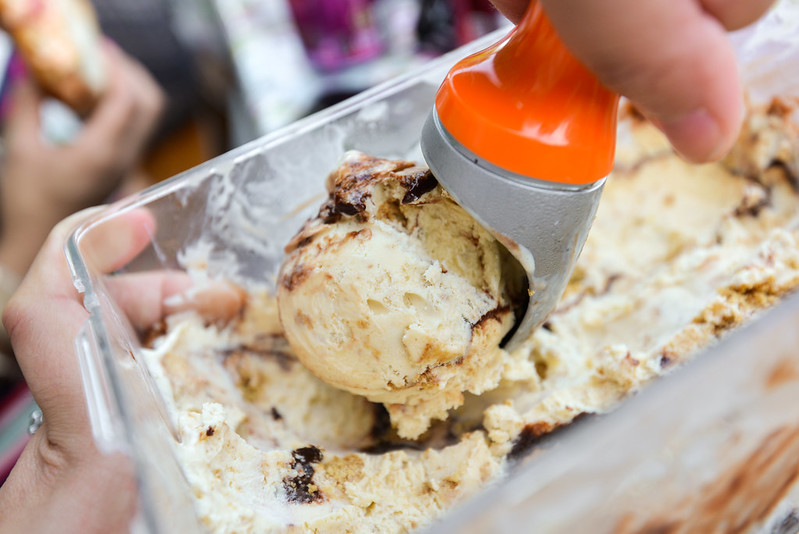 Expanding an already bloated menu and belly, desserts were the icing on the cake at Meatsquatch!. It started with a s'mores ice cream I made, which was created by toasting and entire bag of marshmallows that were then mixed into the custard. Graham crackers were added in during the last minutes of churning, and layers of fudge finished the s'mores equation. 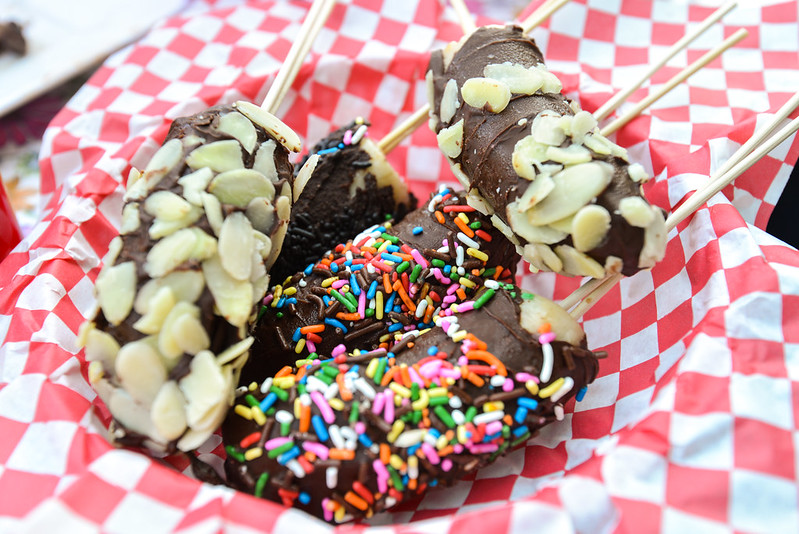 Karla and Craig provided chocolate covered bananas, on a stick (of course). They looked so pretty in their sprinkle or almond crusts. 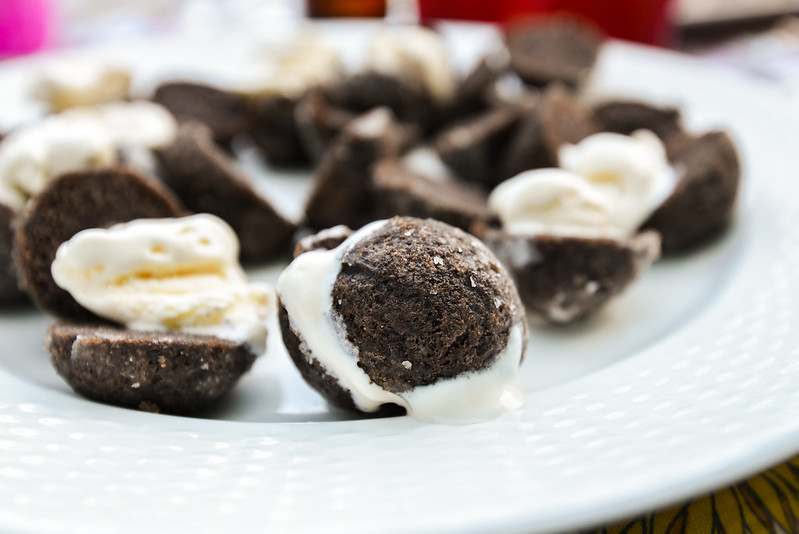 Tyson added to dessert as well with donut holes soaked in a grape-peach moonshine, split and stuffed with a vanilla ice cream center, or to use his term, redneck ice cream sandwiches. Do I really need to tell you that these were yet another hit? I think not. 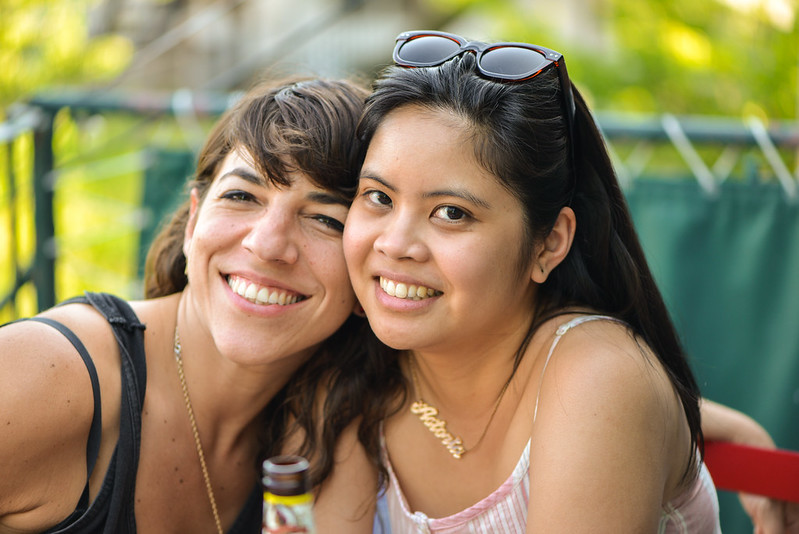 We welcomed back the amazing Debbie at this Meatwave—who always brings a smile to Kristin's face. Years away from New York City left a hole in our collective hearts, so we're so glad that she's returned to Meatwave to brighten our days. 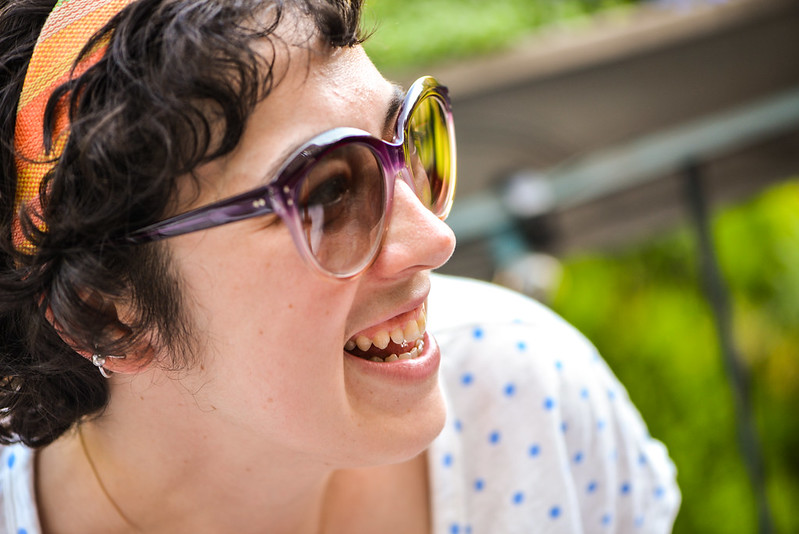 Kaitlin also made her first appearance of the season, coming with a bowl of Nick's potato salad, which I sadly forgot to photograph for prosperity. 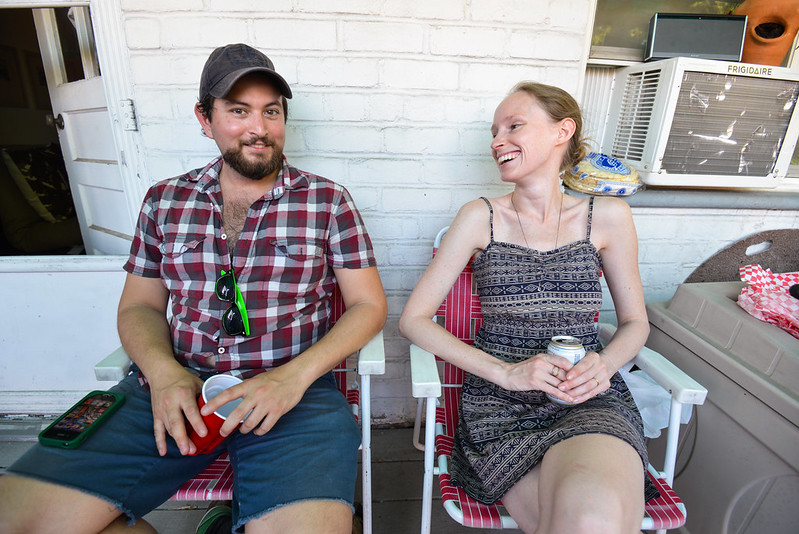 I believe this may have been Carl's first Meatwave ever, which is both exciting and a little embarrassing. The night before Meatsquatch!, while hanging out with Carl and his man Raz, we realized this long-time friend was never added to my mailing list. The error was corrected in haste, and Carl made up for lost time by coming out early and in tow with hot dogs and buns. His presence brought a big smile to Karla's face. 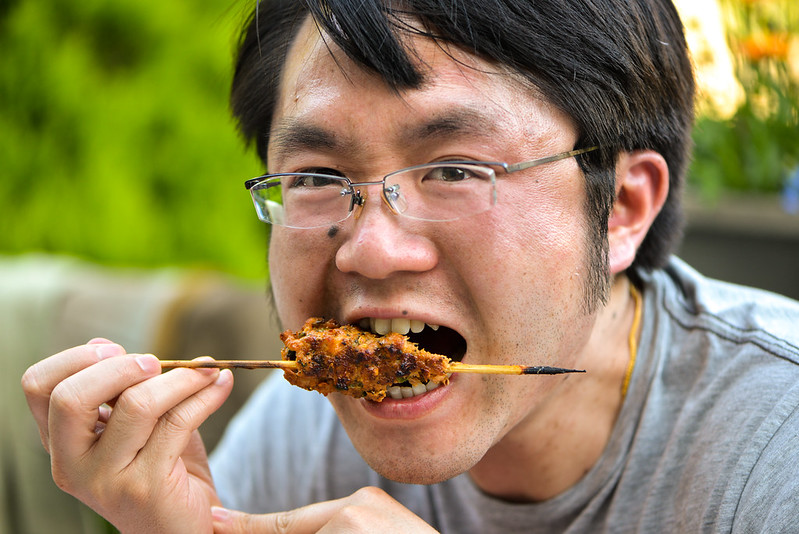 Chris is two-for-two on Meatwave attendance. Last time I got a shot of him stuffing his face, but it was a bit blurry and didn't make the cut for the blog. I told him this had to be corrected, and I caught him in the act of going to town on a skewer of chicken keema. 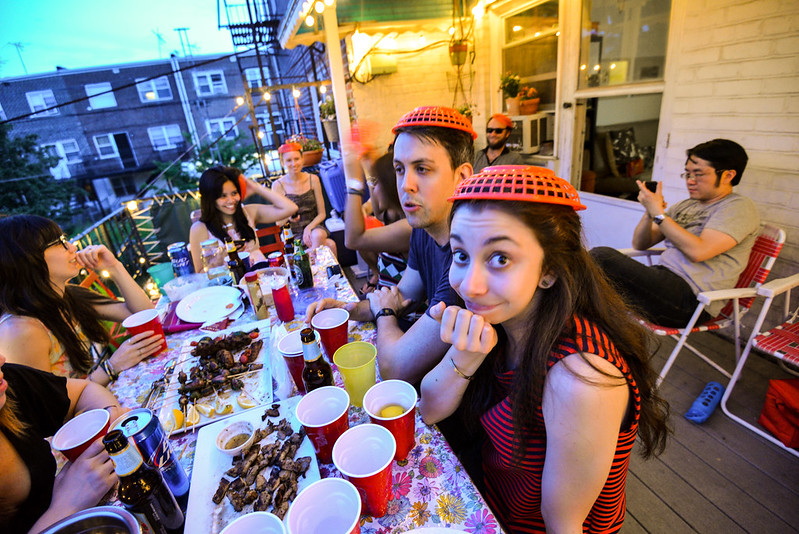 Marissa came later in the evening with a couple of Joe's cousins visting the city. Fresh off a world wind NYC cupcake tour, I was happy to see they all saved room for what really matters in life, meat.

The night ended late in the evening with basket hats, a little too much moonshine, and protruding bellies. It might have been a bit hot, but that never stops the Meatwave, and this was a great follow-up to a fantastic start to the season. If things keep up this way, we're in for one hell of a meaty summer.