More than Meats the Eye 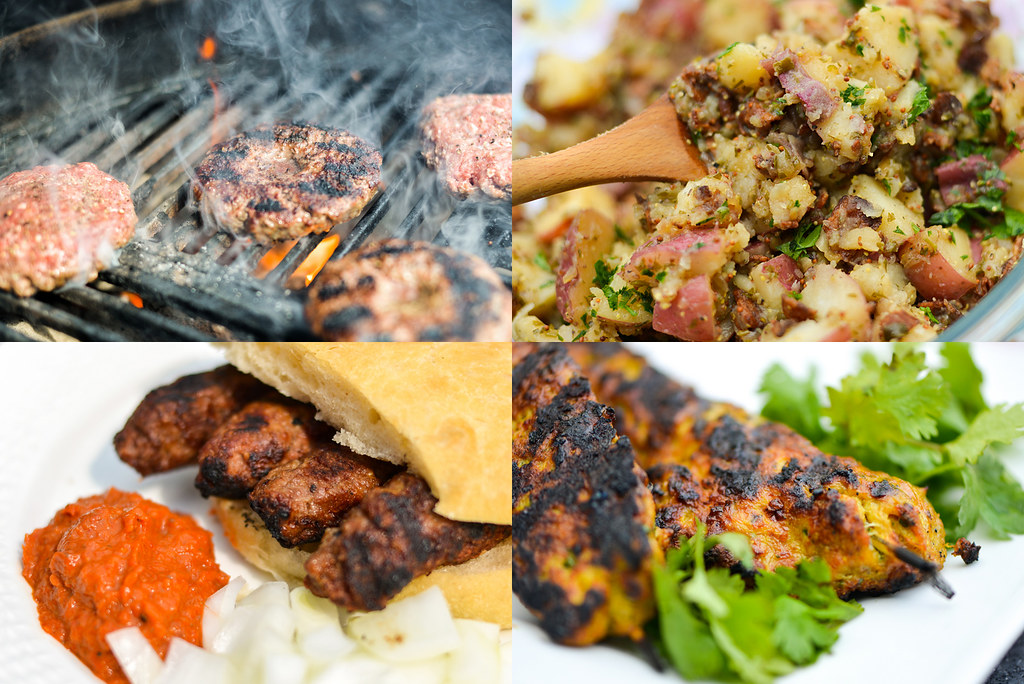 After taking a bit of a break to compete in the Battle of the BBQ Brethren, The Meatwave was back in full force this past weekend. In this return to form, we payed homage to the first true transformer: meat! Shape shifting ground meat creations filled the menu as we welcomed friends old and new in yet another feast that has made this summer one of the best yet. 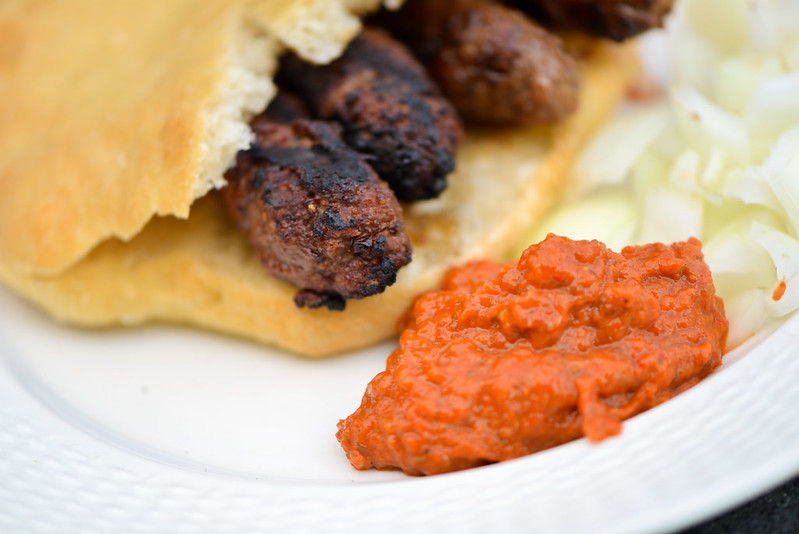 I've taken on a new approach to recipe development for Serious Eats that requires more testing to find not only a great recipe, but the best recipe. That meant this first menu item, the Balkan sausage known as cevapi, had many different variations. There were three distinct meat blends—beef, beef and lamb, and beef, lamb, and pork—and each of those had different levels of spices. There was not one version that wasn't a triumph of great meaty and garlicky flavor, but there was certainly a leader of the pack, so stay tuned to see just how to make some truly awesome cevapi.

The cevapi were served with the traditional accompaniments of the roasted red pepper and eggplant sauce called ajvar and the slightly chewy bread called lepinja. Both of these were homemade as well and stood up in quality to the cevapi. 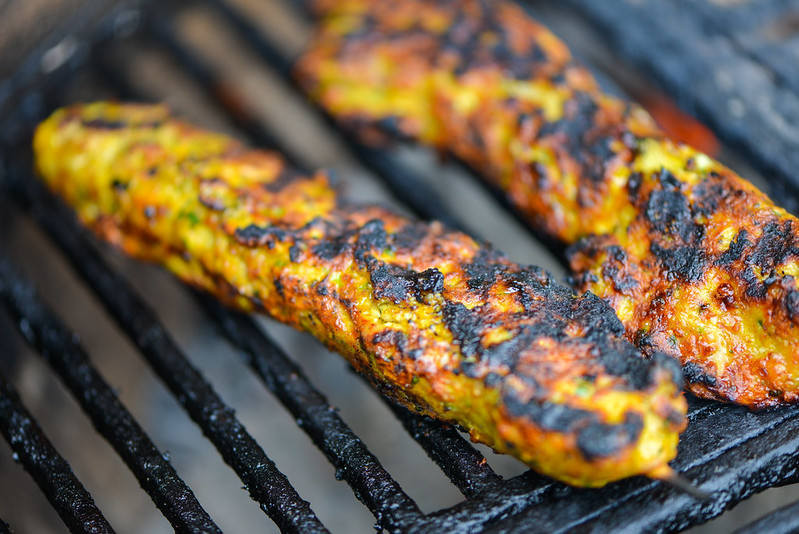 Next up in the ground meat line-up was chicken keema. Meatwaver Tyson procured some from a Pakistani butcher at a previous Meatwave and I was instantly smitten with the heavily spiced and supremely spicy bright yellow ground chicken creation, so much so that it was bumped high onto my must-cook list for this summer. I'm happy to say that after some tinkering with spices and peppers, I got a chicken keema I was incredibly happy with that had the complex earthy and sharp flavor, paired with the mouth-burning heat, that attracted me to it in the first place. 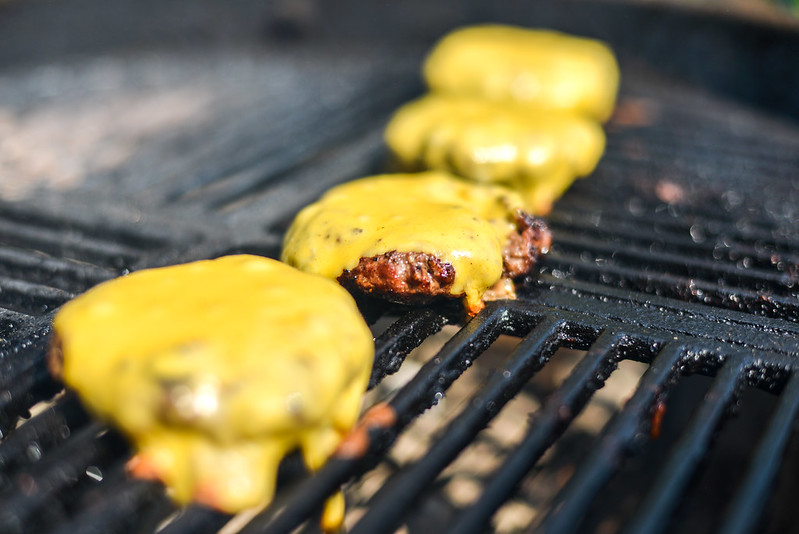 I always like the bust out the classic American backyard combo of hot dogs and hamburgers at least once a summer, and seeing as they're both made of ground meat, they seemed to fit nicely into this week's theme. Not much to say about these except the fatty chuck I bought and home ground produced burgers as juicy and flavorful as ever, and you can't go wrong with all-beef Nathan's hot dogs. 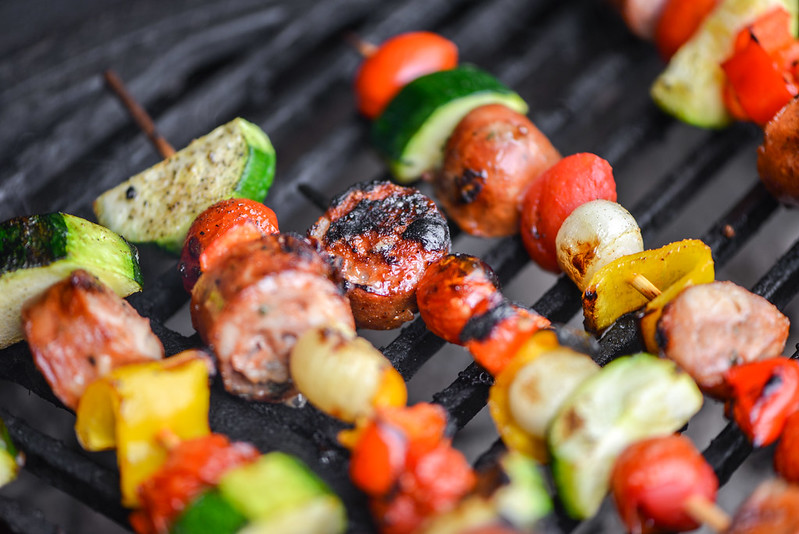 A brand new Meatwaver Meaghan jumped right into the game with these sausage and veggie skewers. I grilled them up with the dying heat of a fire, served them right away, turned my attention to building a new fire, and by the time I went to go get a skewer for myself, they were all gone. That would leave me to believe they must have been pretty damn good, even if I didn't try one myself. 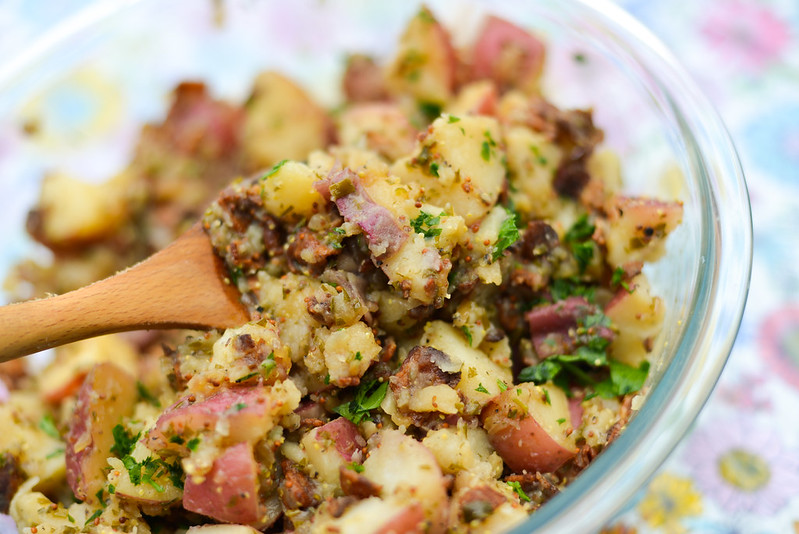 For sides, I kept the kind of eclectic international menu going and made a German potato salad. I've adjusted my recipe a bit from an earlier version, which just made this salad get better. That's saying a lot for a salad that already starts with half a pound of bacon. 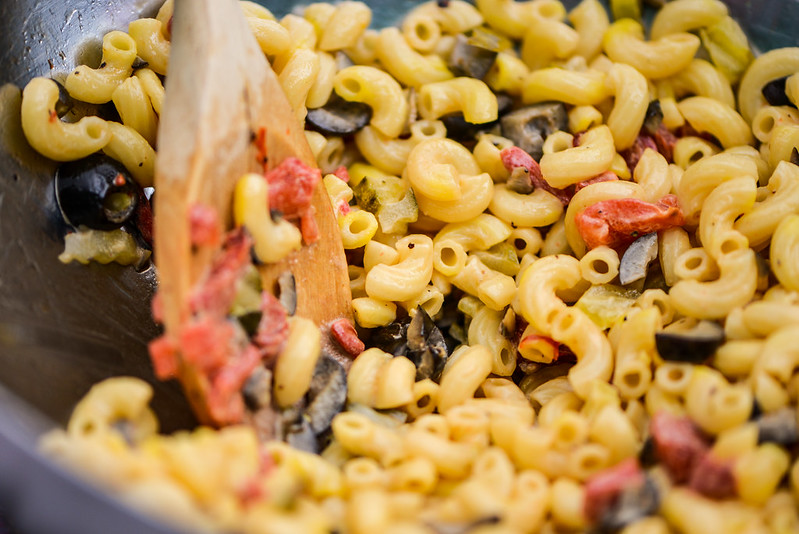 I've been having a hankering for a good macaroni salad, so I was all too pleased when another new Meatwaver, Amanda, showed up with a giant bowl of well dressed creamy macaroni spotted with salty olives. I kept going back to this throughout the day and even took a last spoonful after I was over-stuffed at the end of the evening. 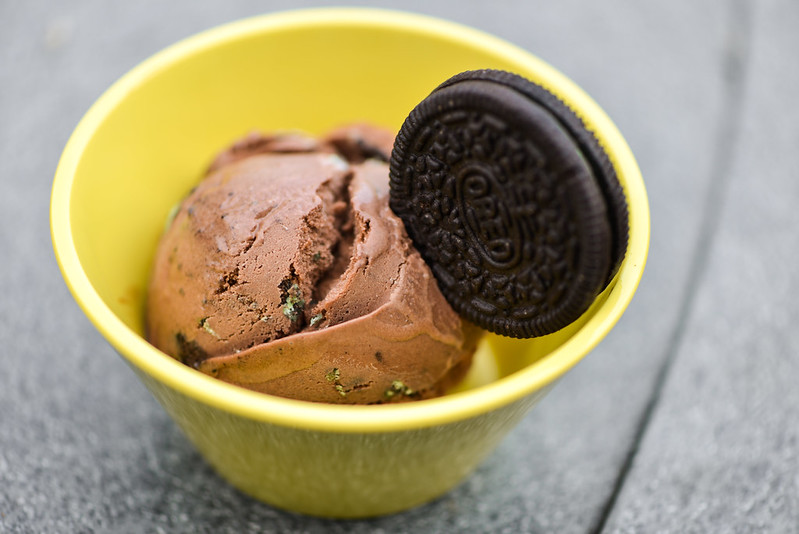 For dessert I tried out a new ice cream idea. I made a normal chocolate custard and added some peppermint extract to give it a minty flavor. Then in the last minutes of churning, I dropped in crushed mint Oeroes to create a mint chocolate cookies and cream ice cream. It was pretty killer. 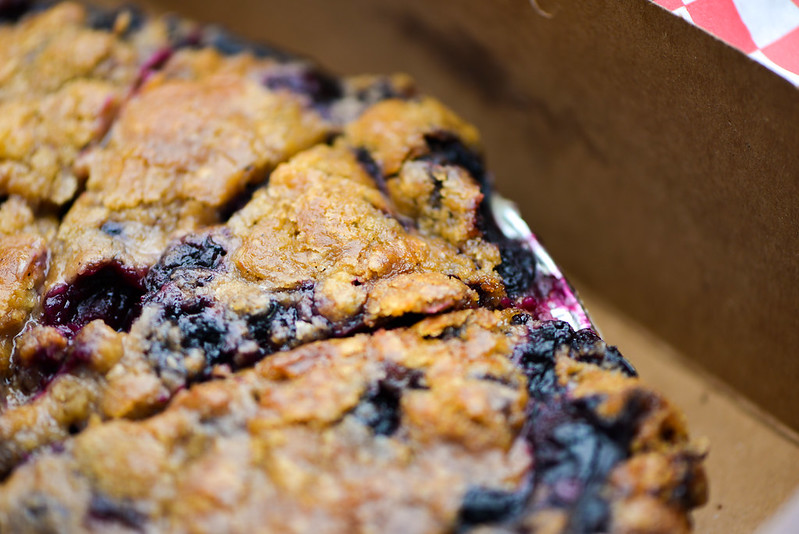 The Schnapp family came in tow with a giant crumbly blueberry pie. This was doled out after the first wave of meat, giving a sweet break before the giant tsunami that was the second wave hit. 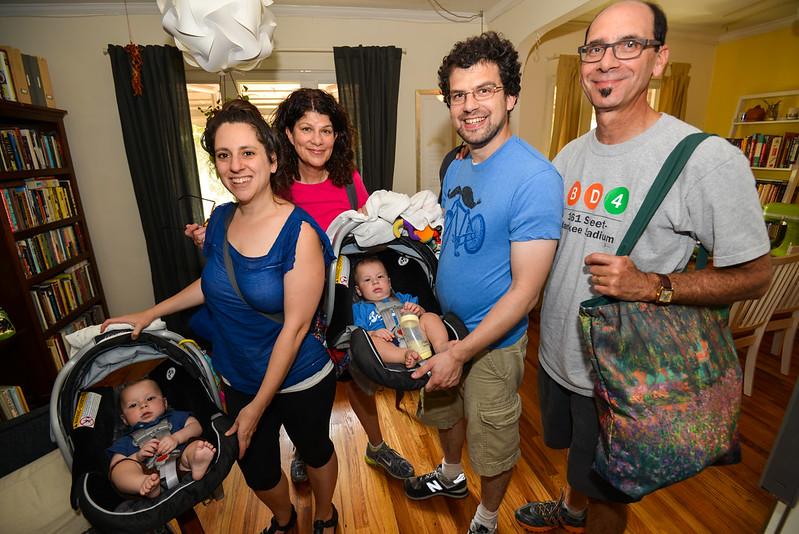 Speaking of Schnapps, here's the entire clan. It was an intergenerational affair as Grandma and Grandpa joined Mike and Amy with their twins. Being the most dedicated Meatwaver of all, it was great to have Mike share his passion with the entire family unit. 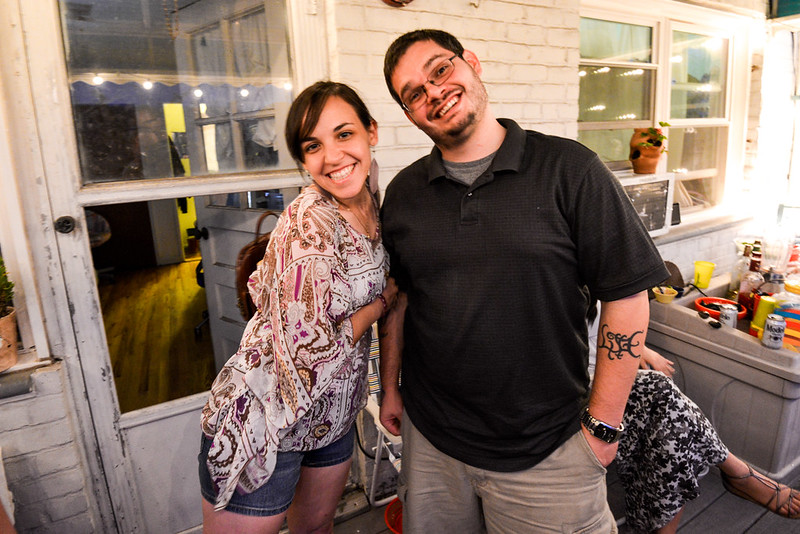 I think this Meatwave broke a record for the most new faces. The wife just started a new job and it seemed like her entire office jumped at the chance to come out and join in our gluttonous feast. So I'm happy to welcome to the Meatwave family Meaghan and Joe... 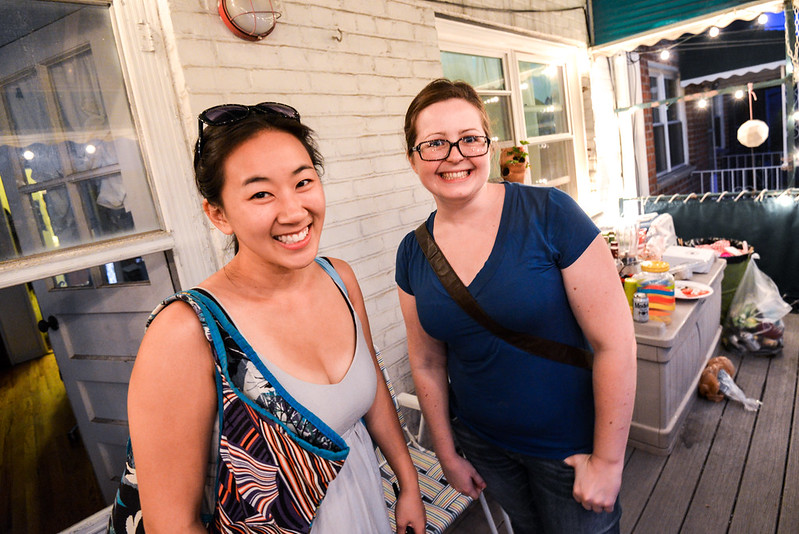 ...and Amanda and Naomi. Also in attendance, but not pictured, were Will and Greg. We're all too happy to have you join the flock of meaty minions. 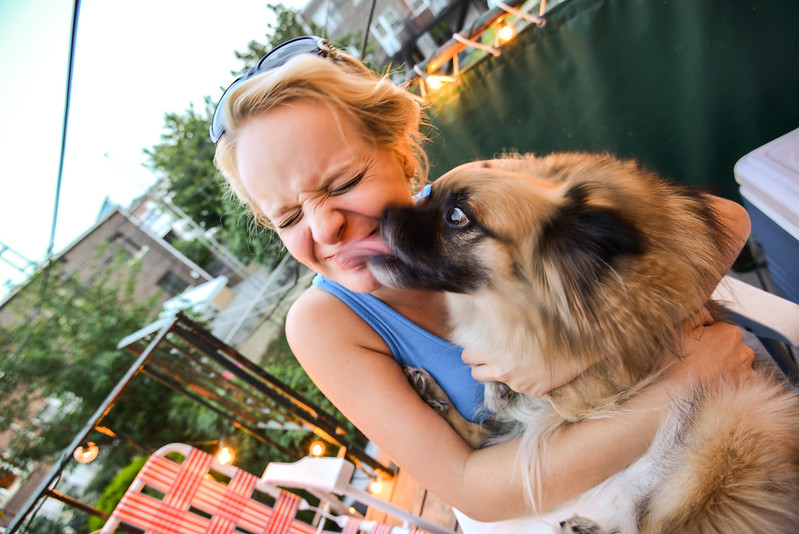 We also had the pleasure of hosting our upstairs neighbors, Ruth and Michael, for the first time. They're troopers, having to deal with the wafts of smoke and meat filling their house every other weekend, so it's great that they came down and finally got their share of the feast. Ruth also quickly made a new friend in Reggie, who wasted no time in taking their relationship to the next level. 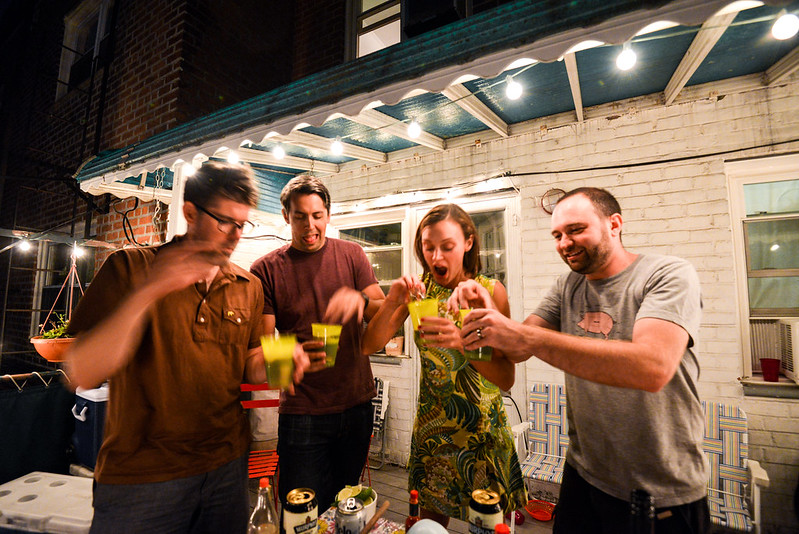 Things got a little crazy by the end of the night, where part of the remaining crowd—Matt, Joe, Suzun, and myself—ventured into Irish car bomb territory. I failed at this mission (never was a fan of these), but everyone else chugged theirs down quick and easy before going back to another beer or shot of whiskey. 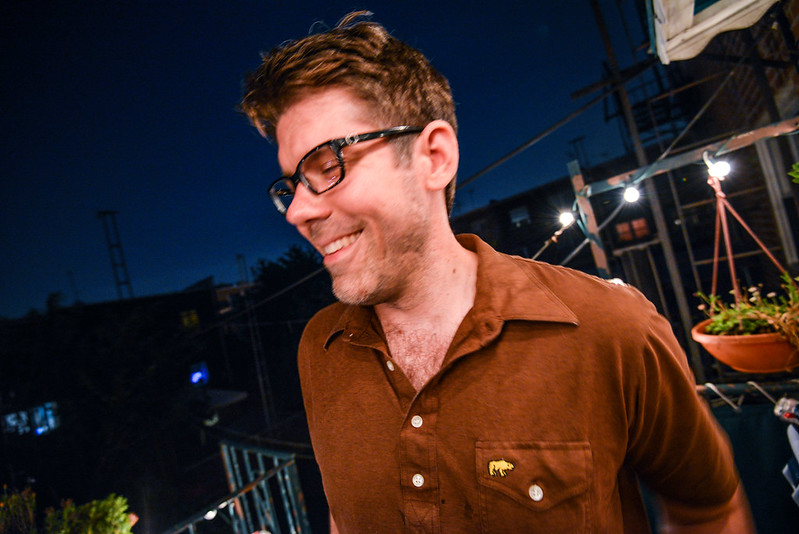 Last but not least, we get to Matt. The most dedicated Meatwaver of the past couple years, we'll soon be loosing him as he ventures to the more sausage-laden land of Chicago. This was likely Matt's last Meatwave and I don't think we'll ever be the same without him. I only hope he'll join forces with his ex-Meatwave brethren in the Windy City to keep this meaty tradition alive there. So this one goes out to Matt, we'll miss you buddy.