Parting is Such Meat Sorrow 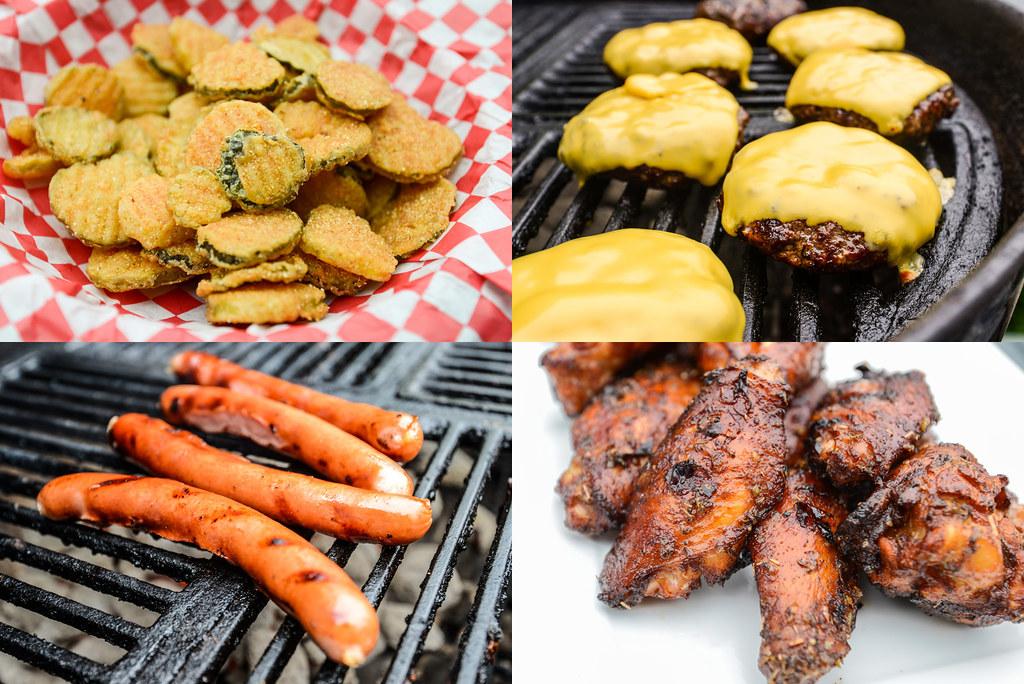 If you've been paying attention, you probably noticed that for the first time in a long time, I haven't been keeping up with my blogging duties. It's a bit shameful for that to happen during prime grilling season, but I have good reason—I recently left my longtime home of Astoria, NY and moved down south to Durham, NC. I kind of underestimated how much time and energy moving would take, so had to let some things fall to the sidelines, and writing was one of those things. I couldn't, however, stop grilling, and before I left the city, I had one last Meatwave blowout with all of my awesome friends. 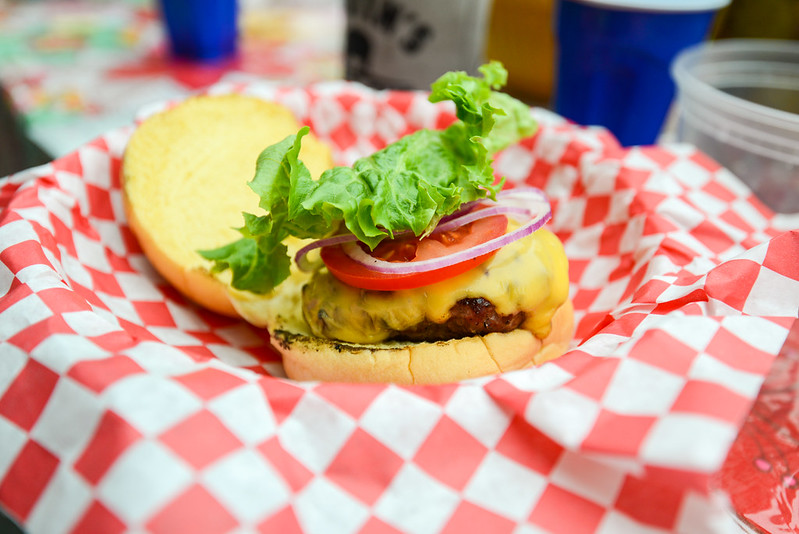 As I mentioned, time was not something I had, so I dropped any plans for an ambitious menu and went with tried and true (and easy) classics. For me, nothing says cookout like burgers, and since burgers were the centerpiece, I picked up 12 pounds of ground chuck, American cheese, lettuce, tomato, and onion to ensure all 30-plus Meatwavers could have at least one or two juicy, meaty burgers. 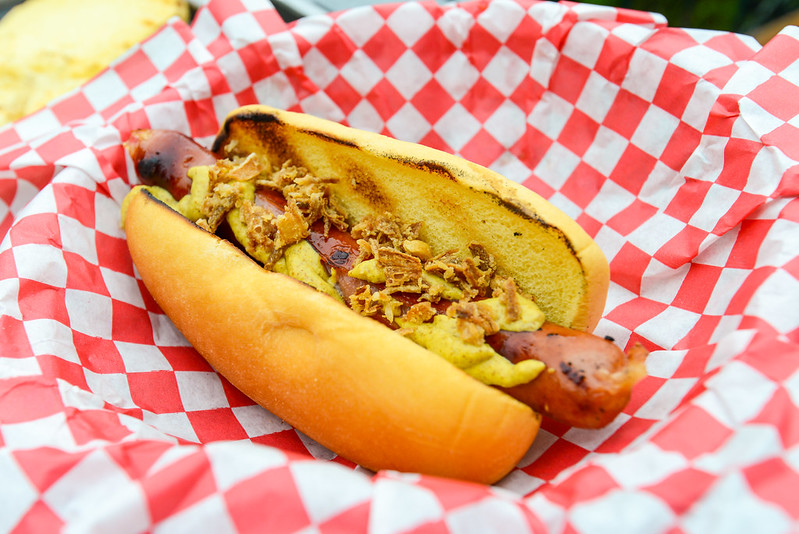 Can't have burgers without hot dogs, right? Beyond the packs of Nathan's I purchased, my sister brought these hot dogs she got in Iceland last summer and had in the freezer ever since. These were some incredibly flavored wieners—a mild spice paired with flavorful lamb and probably some beef and pork as well. The thin casings ripped on the grilled, but apparently that's par for the course with these babies. We topped them with mustard and fried onions also from Iceland. 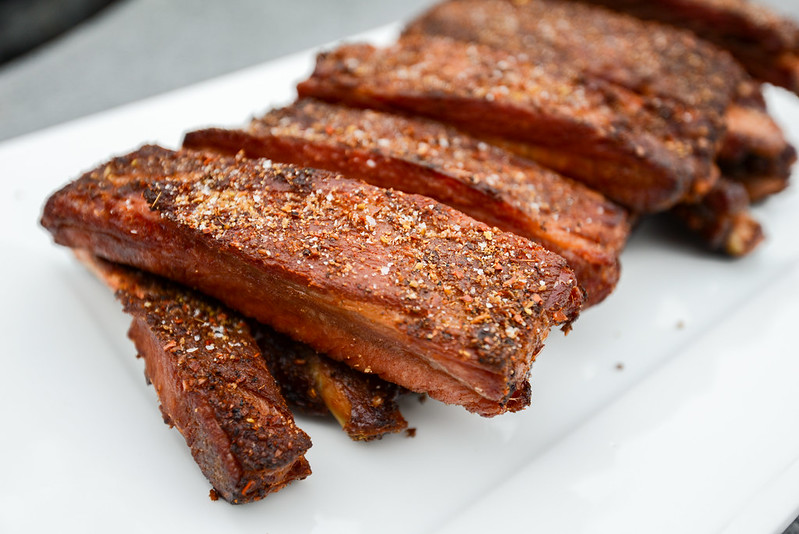 I had some ribs left over from the last Meatwave, so took those out of the freezer and gave them a quick fry before serving. Not quite as juicy as they were when fresh, these Szechuan-spiced ribs were still mighty tasty and the disappeared seconds after they got their glamour shots taken. 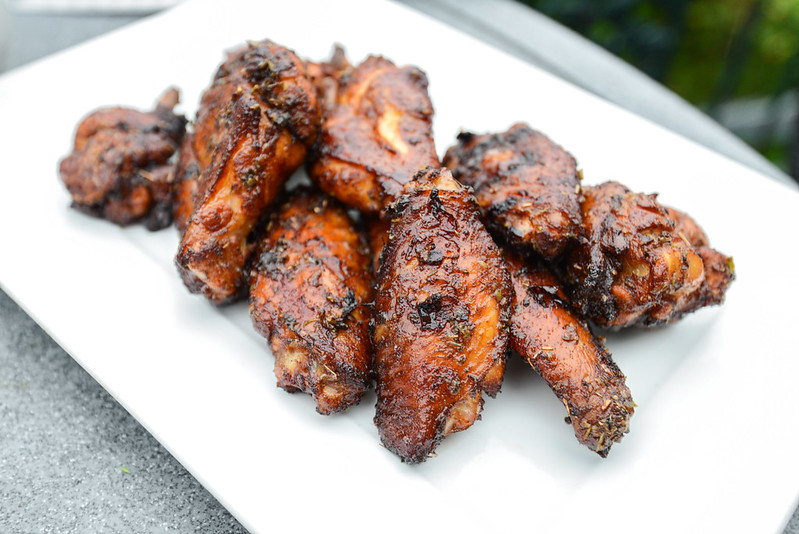 I sent out a call for additional help this time around with meats and sides, and Julian answered with these delicious wings. Marinated in a acidic vinegar and garlic mixture, they had a great tangy flavor the seemingly permeated throughout all of the meat meat. They were a great addition to my somewhat lacking line-up. 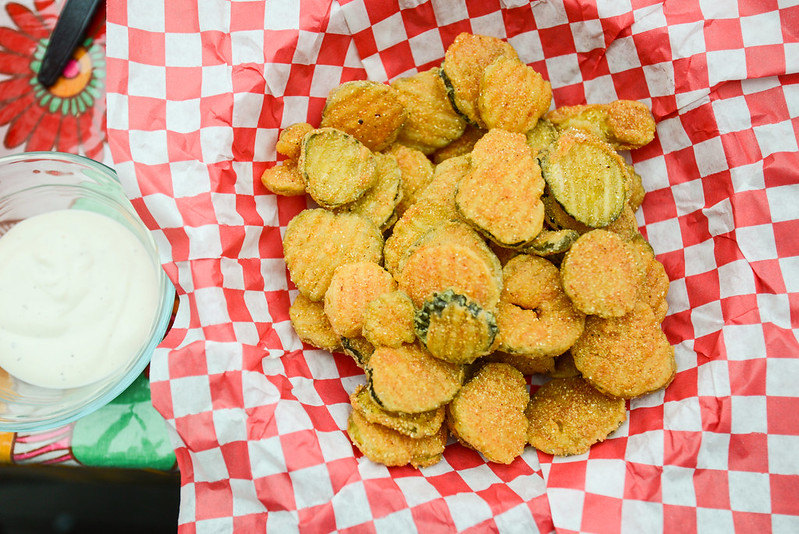 Since I already had oil going for the ribs, I decided to make fried pickles—a longtime Meatwave favorite. I coated the dill pickles with my spiced flour and cornmeal mixture and quickly fried them until golden and crispy. I personally like them with a side of complex and spicy remoulade, but I subbed in some store bought ranch to make prep easier on myself. 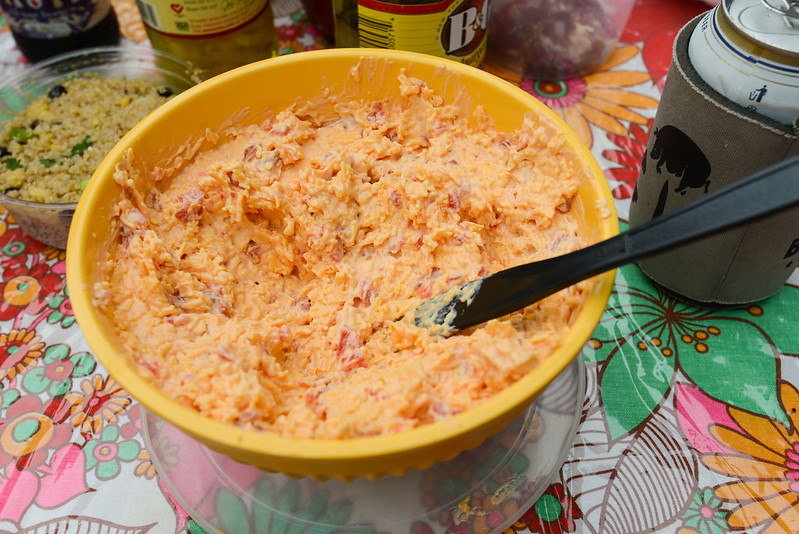 As if I wasn't about to get enough pimento cheese in North Carolina—seriously, it's on every menu here—I made a large bowl of it for this final New York Meatwave. Used both as a burger/hot dog topper and spread on Club crackers, this fit in quit nicely with everything else we had going on that day. 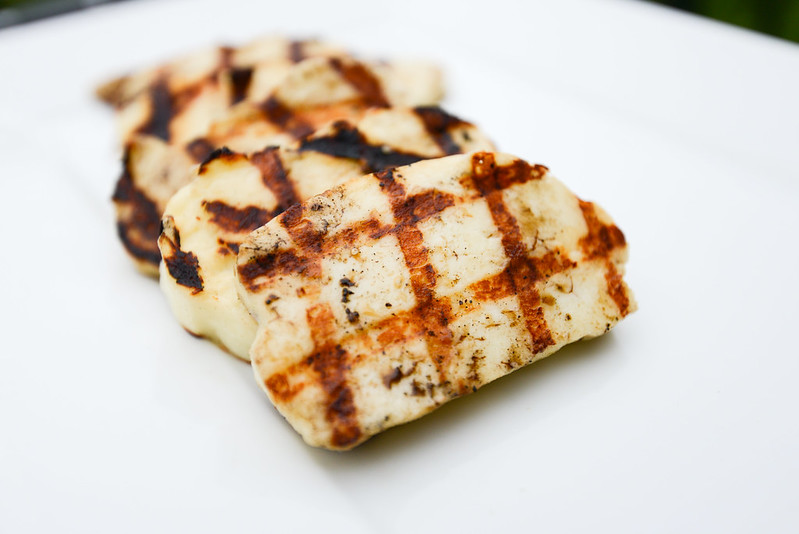 Someone must have read my ode to halloumi a few weeks ago, because Kaitlin came in tow with a couple bricks of the stuff. I merely grilled it up and served it as is—halloumi is so freaking awesome that it doesn't even need anything else. 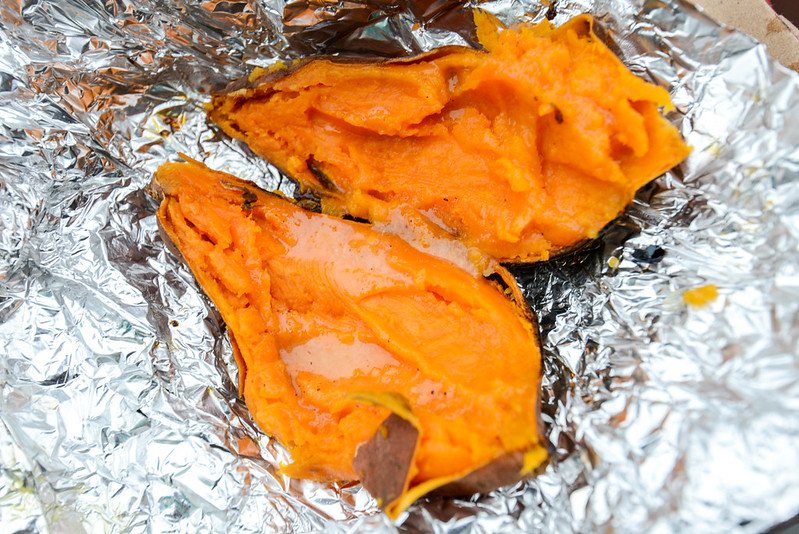 Harking back to the early days of the Meatwave, Peter came with some sweet spuds to make our infamous "Ashy Yam Turds." I wrapped these tubers heavily in foil and nestled them in the coals while those wings were cooking. 45 minutes later, we had wonderfully soft and silky sweet potatoes without the burnt out crust we experienced before we became hip to foiling them. I whipped up some maple cinnamon butter to complete the classic Ashy Yam Turd equation. 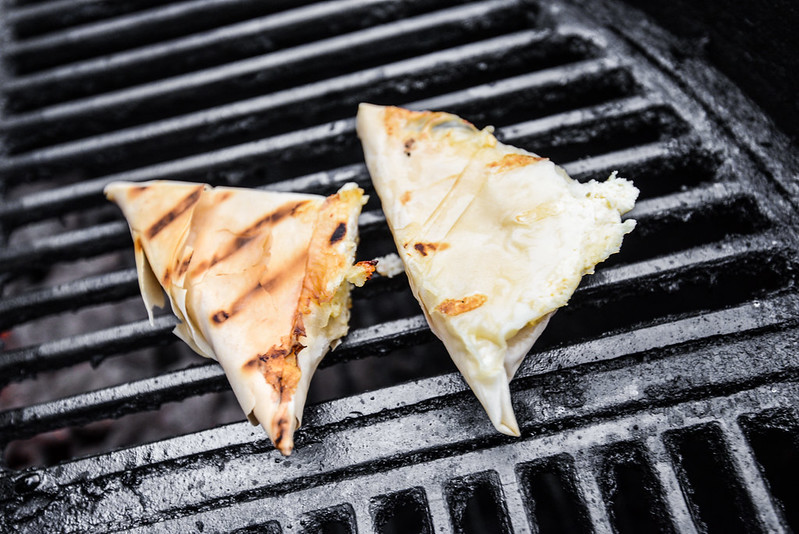 My work buddy Christina has talked a mean game about her Armenian boreks, so she finally made some—well, a whole lot—and brought them to the Meatwave for mass consumption. She didn't lie, these cheese stuffed triangular pastries were pretty killer. We realized at the end of the evening that they were even better when thrown on the grill to warm and crisp a bit. 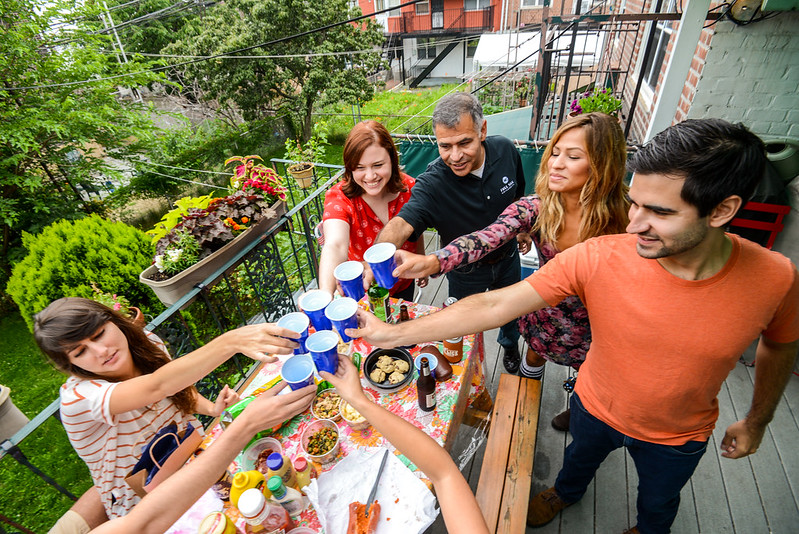 So as you can see, we had a ton of food at the Meatwave as always, but this wasn't about the food really at all—it was all about being with my dears friends that I'm already sorely missing. I always say all the Meatwaves are more about the time spent with the people around me, but this one even more so and what better way to kick off this last NYC feast than with welcoming new Meatwavers. Chuck brought along his Dad and Sister and we started the day with a hearty splash of Icelandic Brennivin to go with those incredible hot dogs. 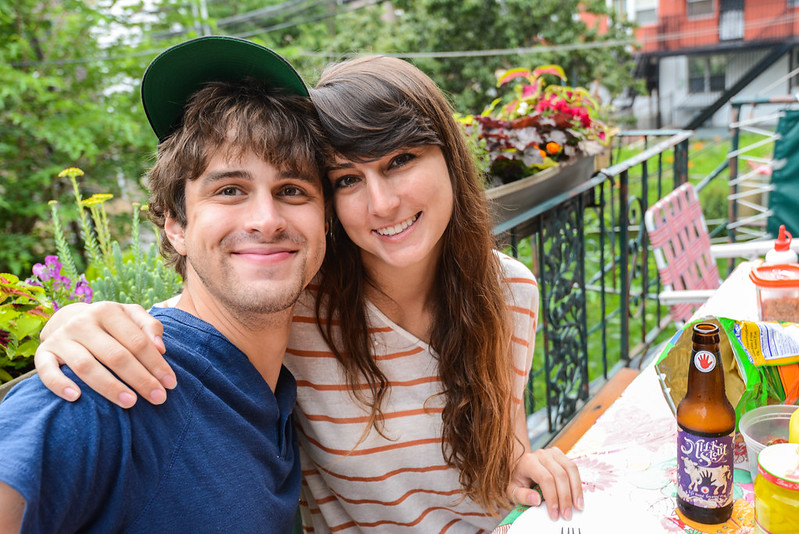 Maggie and Patrick have become the de-facto Meatwave couple over the past two seasons. I don't think there's anyone who loves the Meatwave as much as these two right now, and they were already scheming to make their way to NC to continue to partake in the festivities. 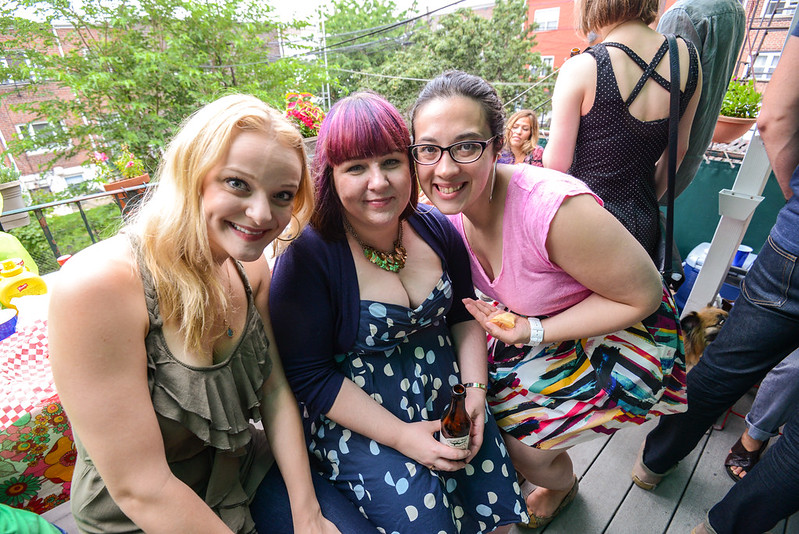 Here we have Ruth, Tiffany, and Kaitlin. Ruth is becoming the proud owner of our awesome outdoor space, relocating from upstairs into our old apartment. I just hope she keeps up at least some of the Meatwave spirit alive. Although Tiffany is a long-time friend, I believe this may have been her first Meatwave ever, and Kait couldn't pass up the opportunity to say a fond farewell, even though it meant the long trip from Jersey City. 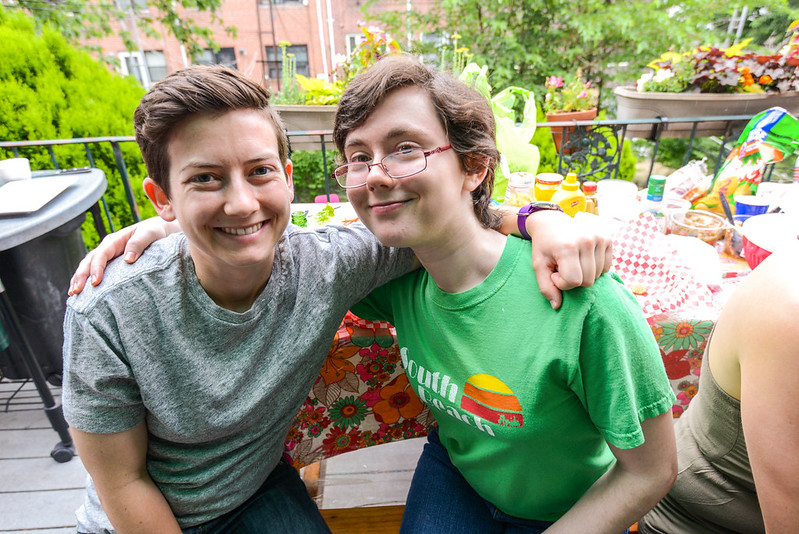 We welcomed two more new Meatwavers into the fold—Kristen and her sister Bonnie. Kristen is such an incredible co-worker and dedicated friend, it makes me wish I was sticking around longer for more karaoke and boozing good times with her. 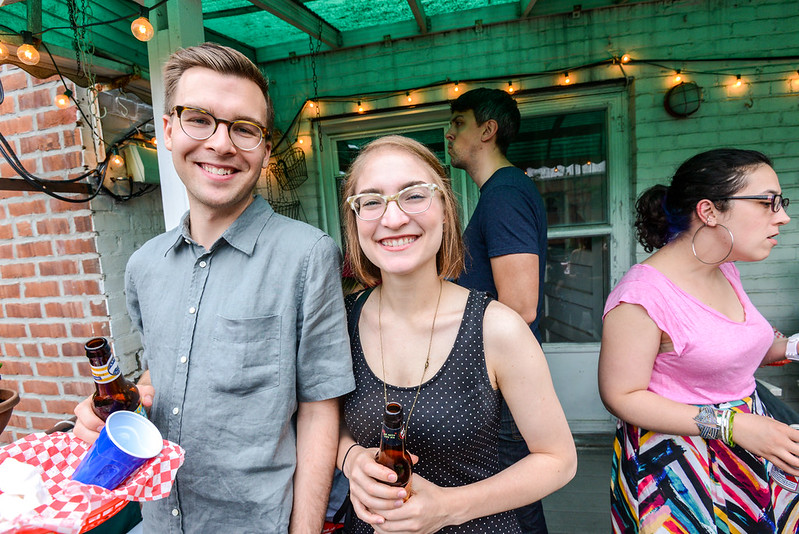 It's also been amazing getting to know Tyson and Kristen over the past year or so. Both awesome people with a shared affinity for cocktails, food, and Foursquare stalking. 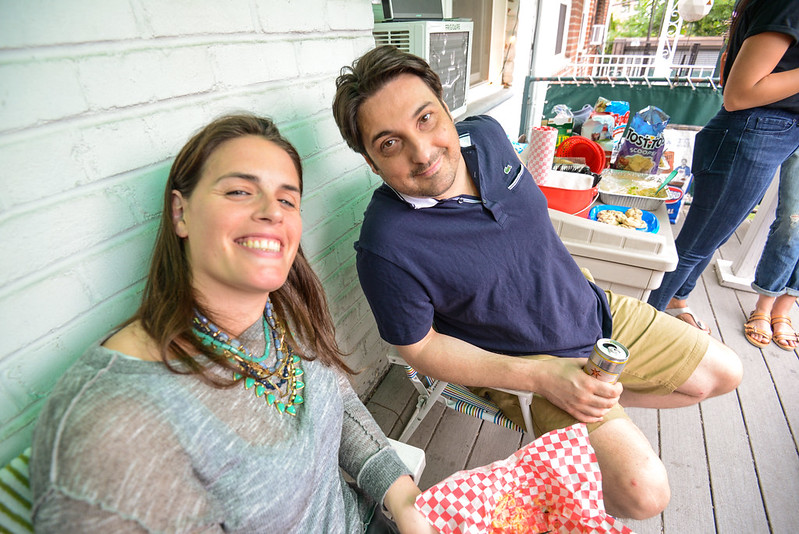 Hayley and Paul made the trip out from Chinatown with an ass load of German potato salad. Man, that was good stuff, and the leftovers became the backbone of my diet over the next when I survived on take out and whatever was in the fridge as I packed like a mad man. 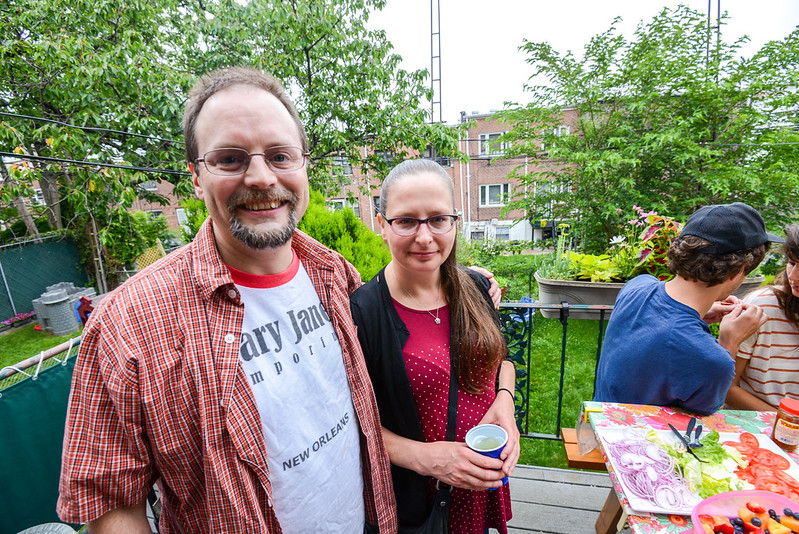 My brother in smoke, Julian, has been one of the only people to contribute to the Meatwave with meat-based, grillable foods over the past few seasons, and for that he gets a special shout out. I met him and his Staten Island crew at the NYC BBQ Cook-off and we've remained friends every since with him, Tracey, and Chris becoming Meatwave regulars. 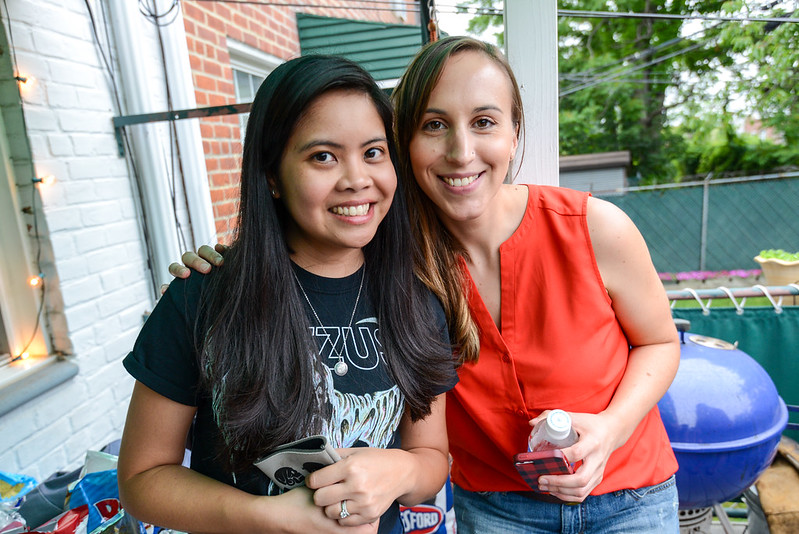 Emily was hooked after her first introduction to the Meatwave in May and came back for seconds. I'm sure if I had stuck around, she would have returned for thirds and fourths too, but I'm glad I was at least able to make it out to her place a couple weeks earlier for a Brooklyn-based barbecue where I was treated to some amazing steaks. 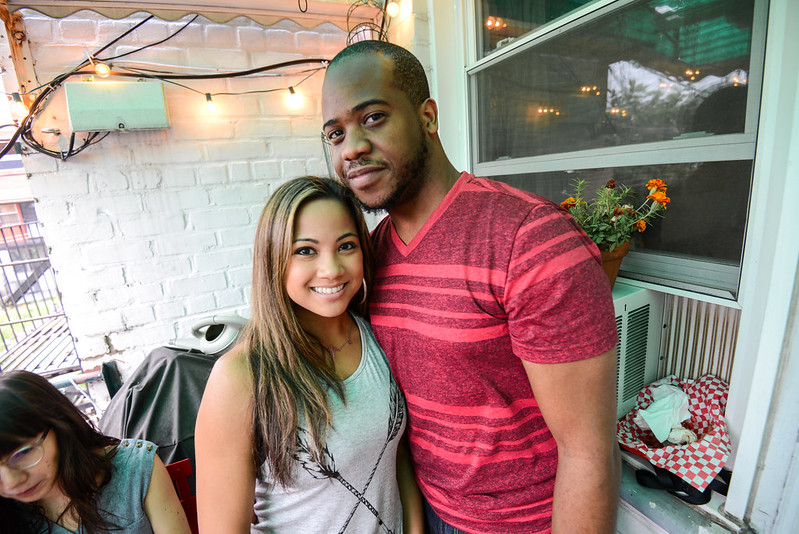 It figures as soon as my cousin Trecyi moved back to Astoria, we decide to leave. At least for a little bit it was good to have her back in Queens and running into her at CVS and grocery shopping. It's good to know we still have family representing us in our old neighborhood. 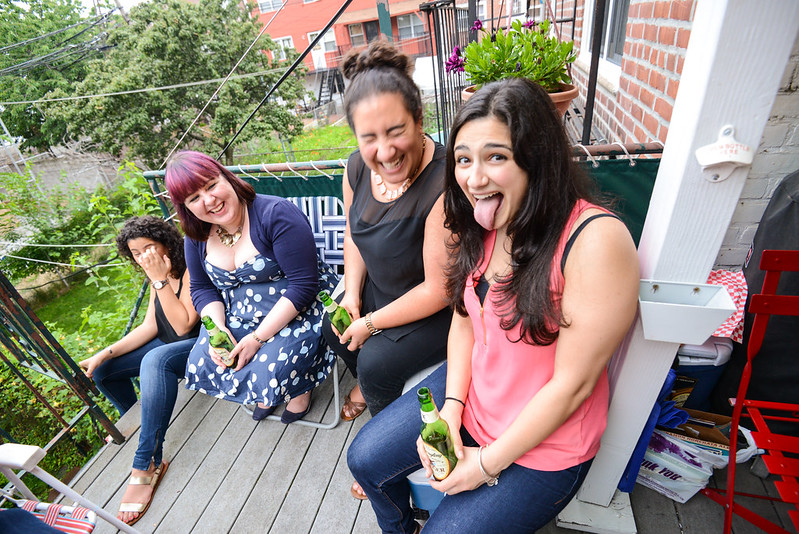 The Sirabian sisters have become the life of the Meatwave whenever they're here, and also bring along equally entertaining friends. This time they also came with a whole mini-feast they made themselves, which must have been many many hours in the making. I'm going to miss having them around a lot—I don't think a Meatwave will ever be quite the same without them ever again. 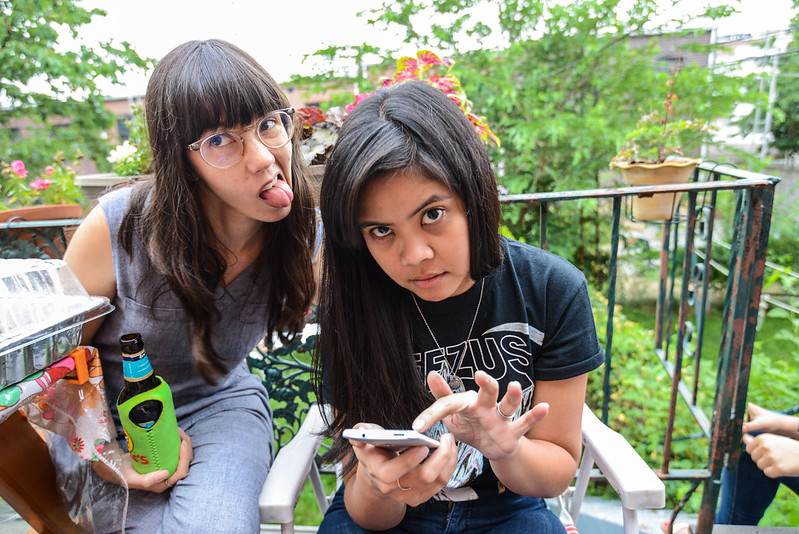 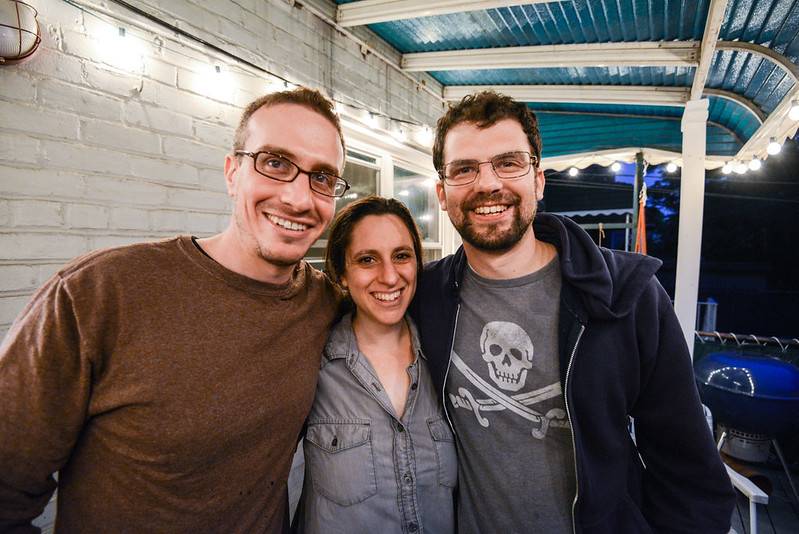 The original crew of the Meatwave had to make a final appearance. Although Mike and Amy have two kids and Pete has a crazy busy job that makes their attendance more spotty than it once was, I don't think our barbecues would have ever become what they have without them—their dedication was part of the reason I kept doing them every other week for years on end. 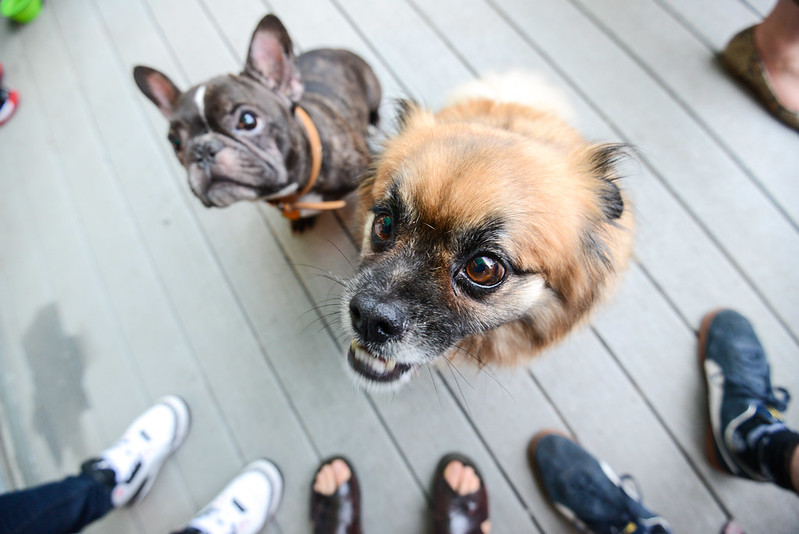 And of course it's a hard goodbye to my favorite furry friends—Pork Chop and Reggie. They were seemingly more excited by the food than anybody else, although were pretty relegated to eating only fallen scrapes. Their enthusiasm and companionship was unparalleled and I can pretty safely say they were the only Meatwavers that had an infatuation with my leg on a regular basis and they weren't scared to show it.

Oh man, sitting here in North Carolina, where I know very few people and am still trying to figure out how to grill comfortably in my mosquito ridden back yard, has me already really missing all the great people and good food in New York. I can take solace in the fact that the Meatwave was a driving force in creating and maintaining a lot of my friendships, and I can hopefully look forward to the next chapter of building new relationships around the great times the Meatwave provides, which is what it's all about in the end.