So, We Meat Again 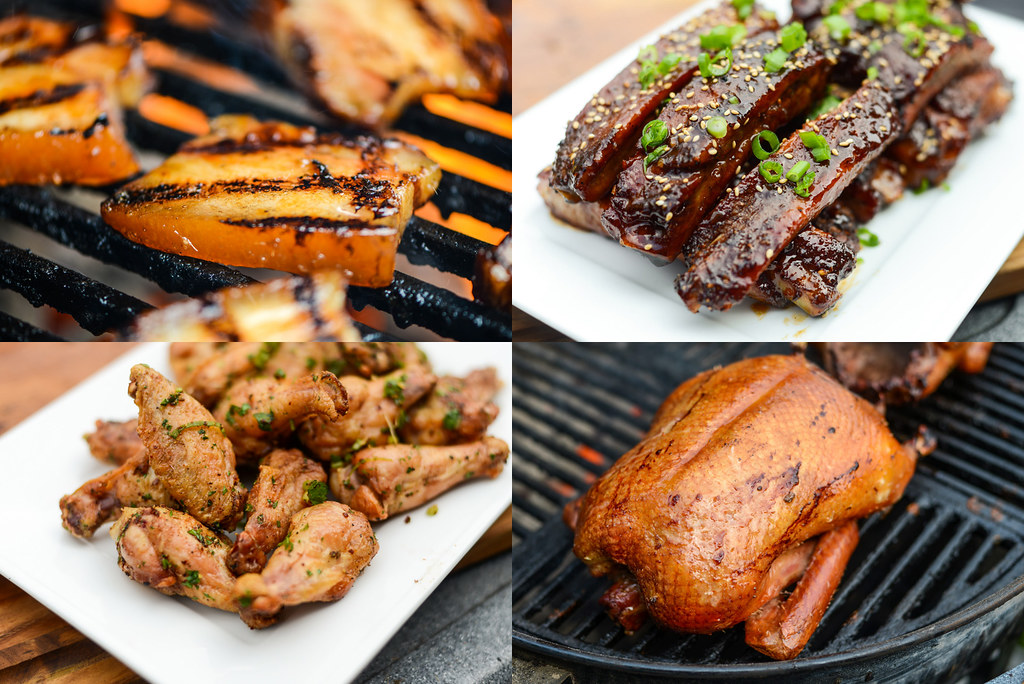 Anyone living in the Northeast knows this past winter was a bitch. We lived through months of frigid temps and snow with an equally cold, damp, and depressing start to spring. Having weathered all that made the start of the Meatwave season just that much sweeter, and we sure began this 12th year in grand style. With one of my most ambitious menus to date and a turn out that was only rivaled by last year's Memorial Day, this was surely a Meatwave that will be remembered for a long time. 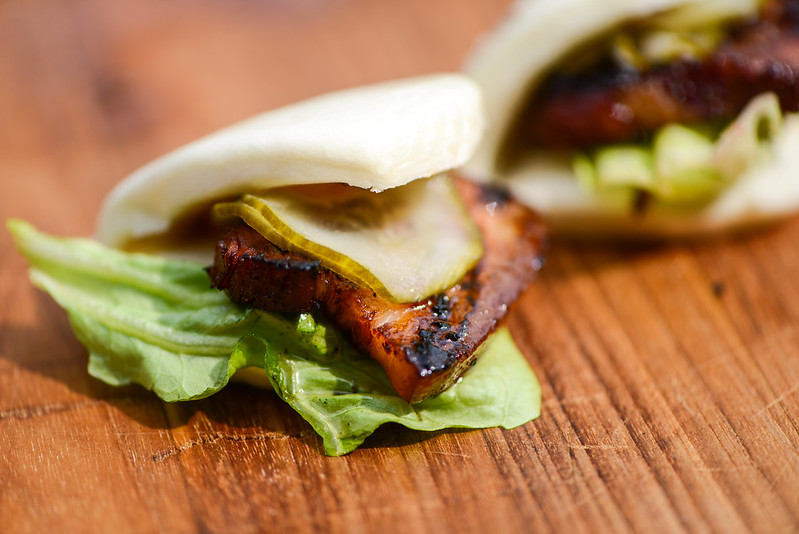 Back in the fall I got an Anova immersion circulator. I thought winter would be to perfect time to get my feet wet with sous vide, but alas, I never even took it out of its box. To ensure it got use, I vowed to make sous vide part of the Meatwave and made good on that by trying out this recipe for pork belly buns. With that simple recipe decision, my Chinese-inspired menu for the day was born, and these buns were a great way to get the day started.

After slowly cooking in their water bath for ten hours, I sliced the chunks of pork belly into individual servings and grilled them over direct heat until hot and gelatinous. Then I loaded them up in steamed buns with lettuce, quick pickled cucumbers, and a mayo made with the flavorful cooking liquid. Best pork belly I've ever made! 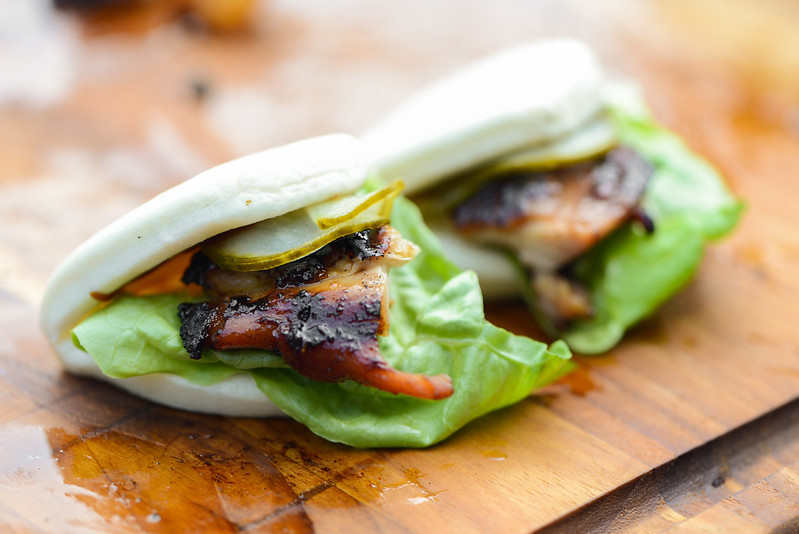 For mostly fun—and for those that don't dig on swine—I also cooked up char siu chicken and gave them the bun treatment as well. After marinating pounded chicken thighs in a ubiquitous char siu sauce, I grilled them until just cooked through and well caramelized. Then I cut the chicken into bite sized squares and used the same lettuce and pickle combo on the buns, but opted for hoisin as my sauce of choice. 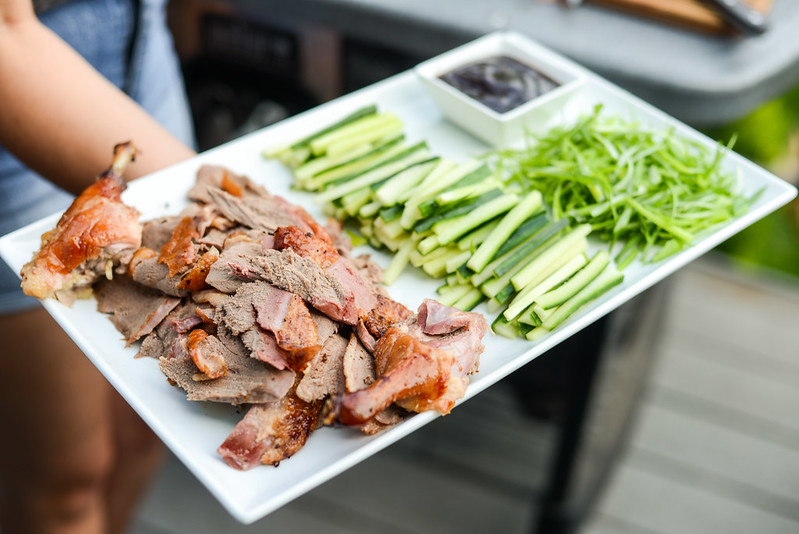 I've been wanting to do Peking duck for a long time and finally got to it at this first Meatwave of 2015. I went with a more simple, non-traditional process where I first separated the skin from the meat, then coated the birds in a maltose and soy sauce mixture. I let the ducks air dry in the fridge for 36 hours, then cooked them beer can style, vertically in the smoker. The fat below the skin was well rendered when the breast meat was done, but the skin itself wasn't as crisp as I wanted, so I moved the ducks to indirect heat on a hot grill to quickly to give the skin a little more crunch. Despite the duck being slightly dry, it was still delicious when wrapped up in homemade Mandarin pancakes with fresh cucumbers, scallions, and hoisin. 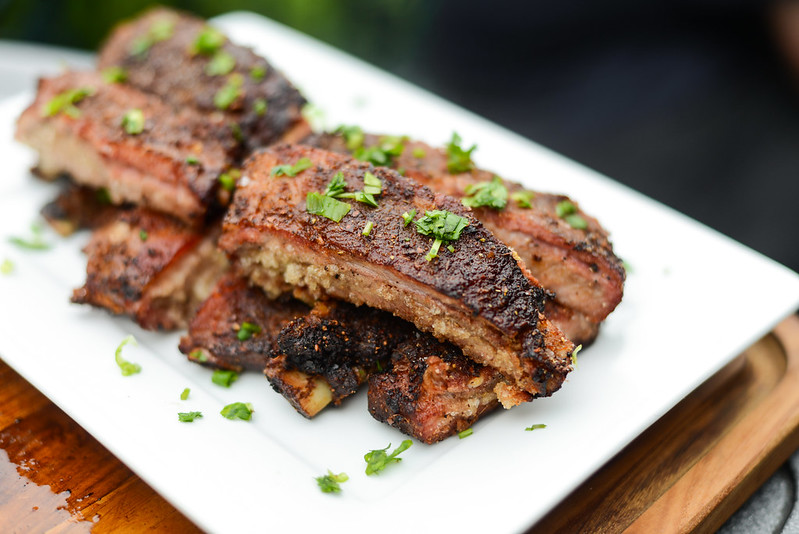 Next I had the idea to try smoking and then frying spare ribs. I did two incarnations of these, the first utilizing a Szechuan-inspired dry rub that I applied to my St. Louis-style spares the night before smoking. I then let them cook over apple wood until slightly underdone—about four hours of cooking time as opposed to the usual five. I let them cool to room temperature, cut them into into individual ribs, then fried them quickly in 375°F oil, and finished them with a little extra dry rub. The short frying time made a world of difference—the exterior of the ribs had a nice crunch to them while the insides ended up perfectly tender and smoky. 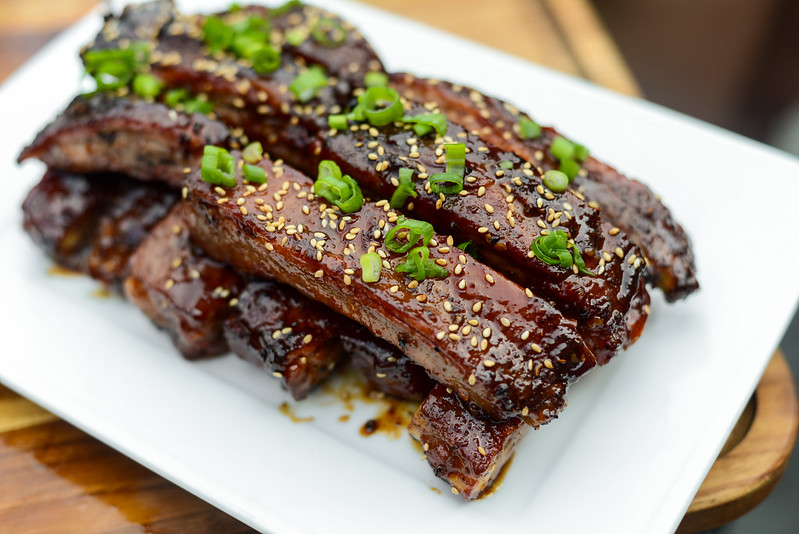 For the next batch of ribs I used a much sweeter rub that had a bit of Chinese five-spice powder in it to give it a lot of depth. I smoked these at the same time and for the same length as the previous racks, but after frying them, I tossed them with an excellent Hoisin glaze. These sweet Hoisin smoked and fried ribs were a great contrast to the spicier Szechuan ribs. 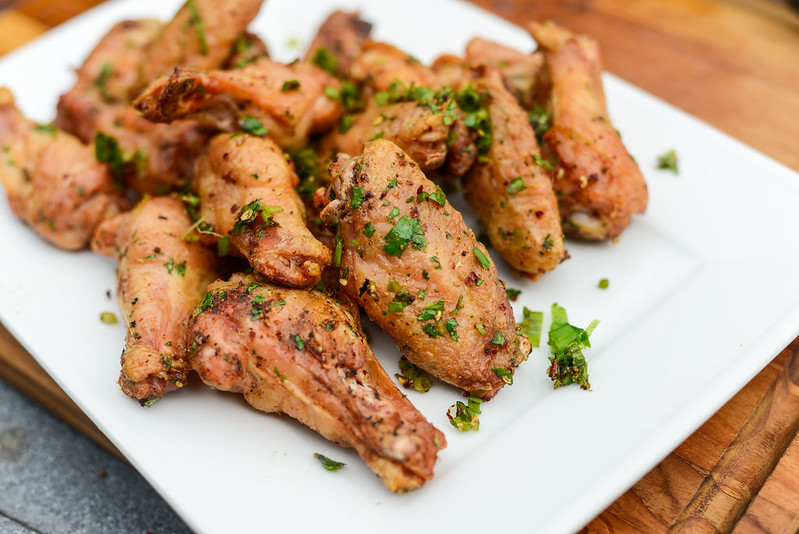 Finally I made these unassuming Xi'an style wings. After air drying the wings and cooking them over indirect heat until they were crisp, I coated them with a spice mixture that relied heavily on Szechuan peppercorns. The looked unassuming, but they had an amazing power to numb your tongue and lips with that unique Szechuan peppercorn spice. The crowd was spilt on these, they either freaked people out or they really loved them, either way, both batches disappeared quickly. 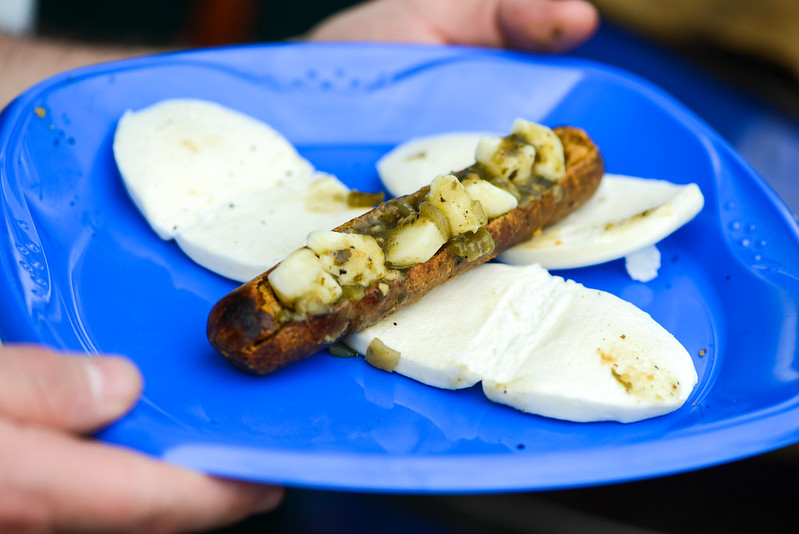 My buddy Jon brought some veggie dogs for his non-meating self. After grilling off a couple, he creatively stuffed one with cheese and turned it into an airplane with the few remaining steamed buns. 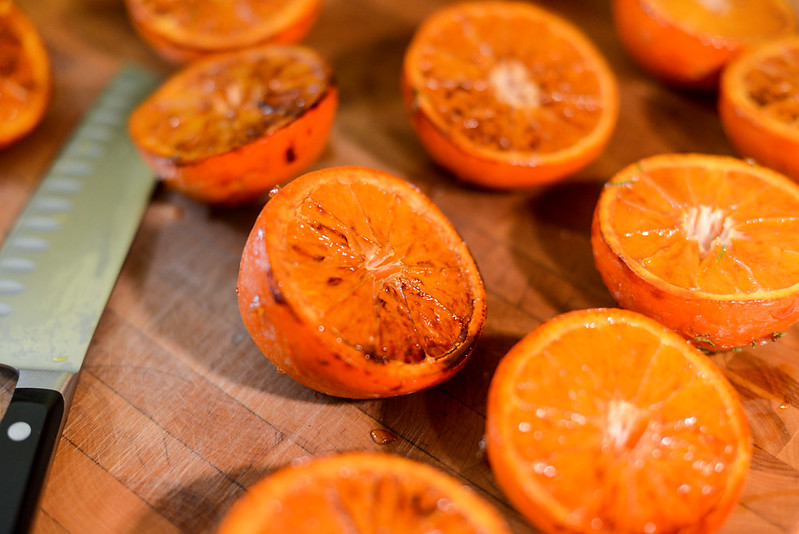 Kristin started off the libations with a drink made of tangerines she dipped in sugar and caramelized in a pan. Those were then juiced and mixed with only rum to get our drinking off to an extra-boozy start. 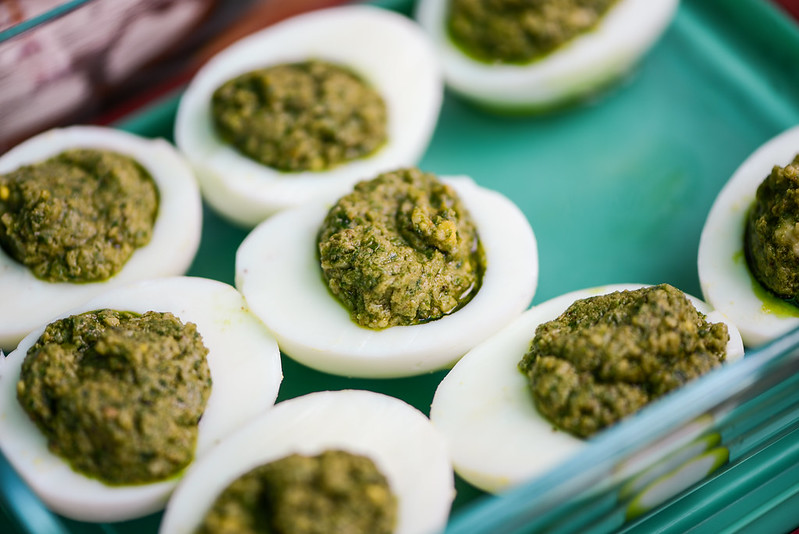 Tyson brought along these ramp pesto-filled deviled eggs. I believe he wins for the fanciest sounding side anyone has ever made. 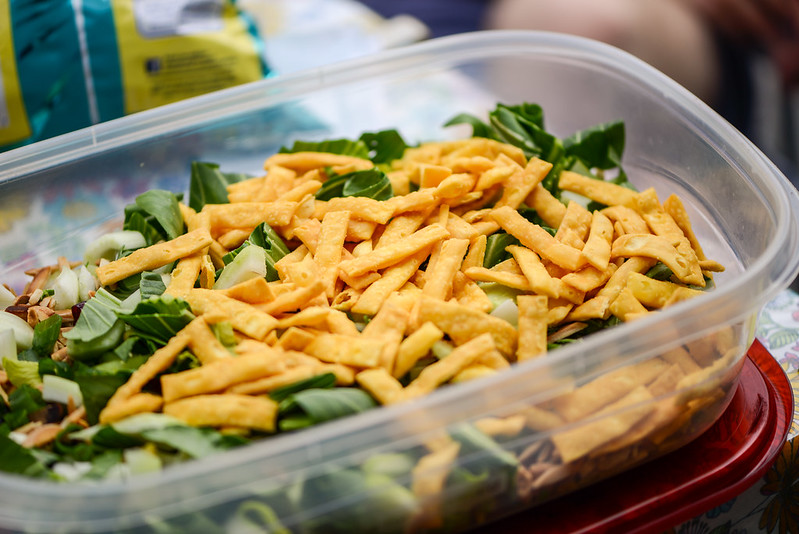 Amanda brought some green into our otherwise meat filled day with a fresh bok choy salad with chow mein noodles. I have to admit, I skipped the salad, but sat and ate what remained of those crunchy noodles at the end of the evening. 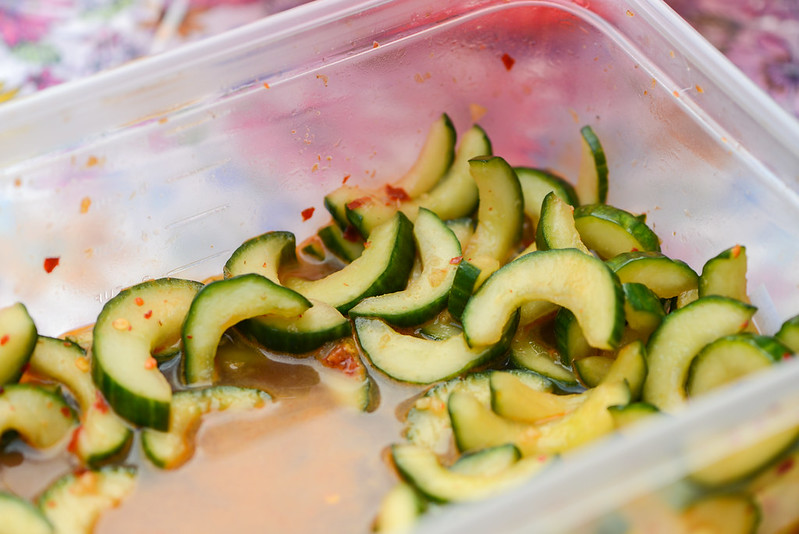 Rachel and Chuck made this excellent cucumber salad. Both refreshing and spicy at the same time, I loved it and it was my go-to side for the afternoon. 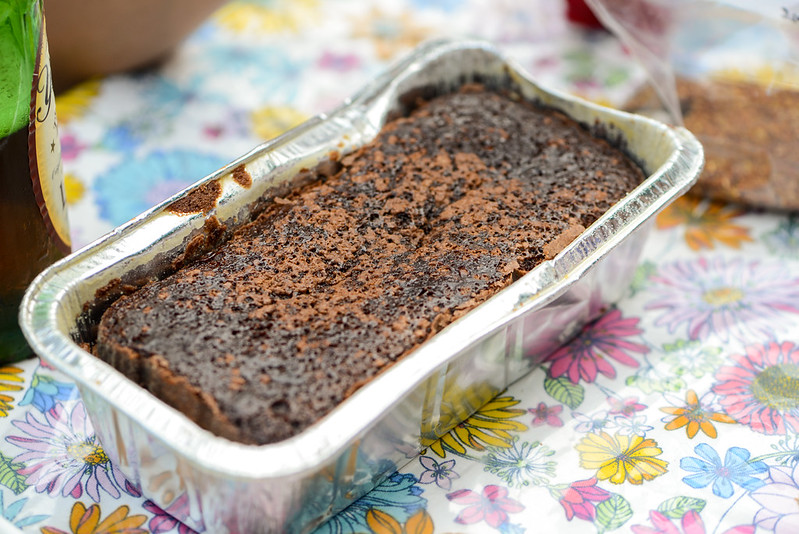 I can't remember exactly who brought the desserts, but after a day filled with mostly mouth numbing foods, the sweetness at the end was certainly welcomed. One of the offerings was this boozy chocolate cake. 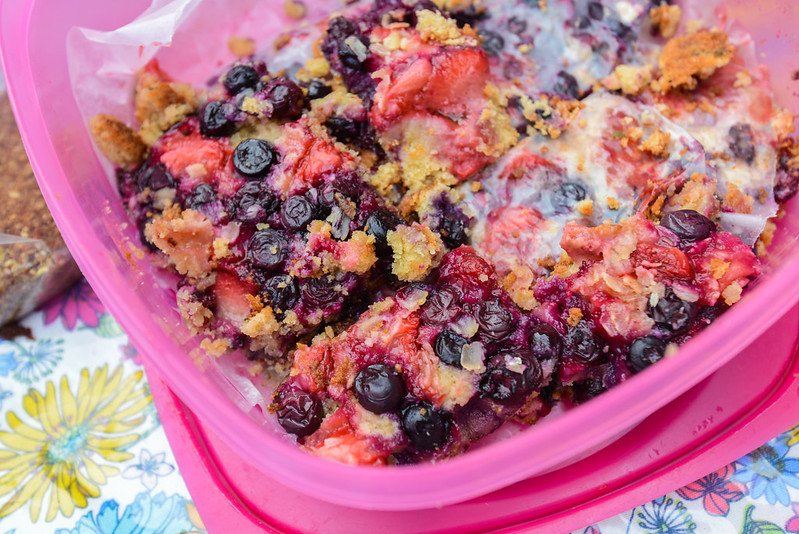 Another was this blueberry crumble. There were also cookies that I ate way too much of after being completely stuffed at the end of the night. 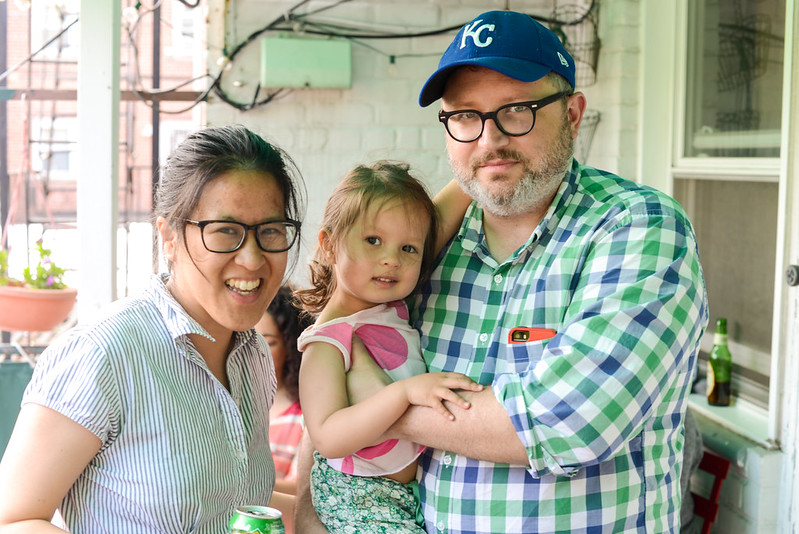 And now for all the people that made this Meatwave such a great day. This was Kuban family's last Meatwave as Astorians. I'll certainly miss running into them in the neighborhood, especially Margot who loves to "eat meat outside." 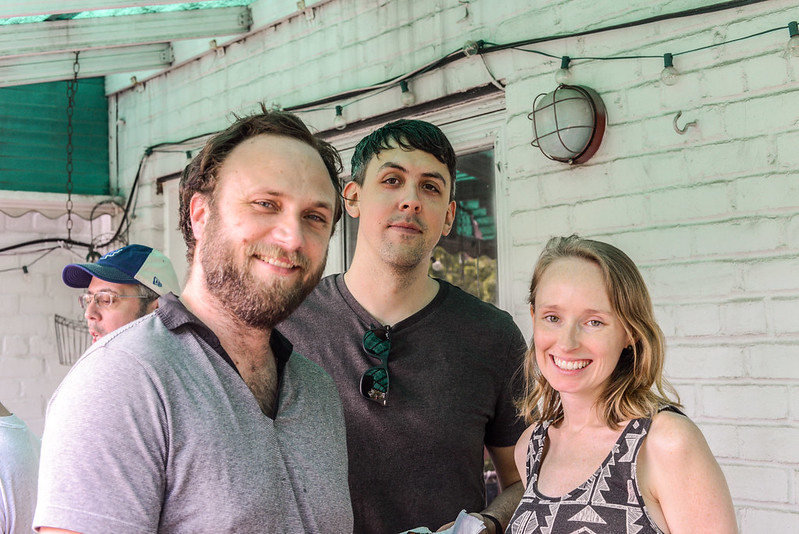 With the moving away of Adam and Claire, comes the reintroduction of Craig and Karla to Queens. After a long stint in Brooklyn, they've realized their folly and have relocated to close-by Sunnyside. Hopefully this means we'll get to see them more often, along with Joe and Marissa, who tend to role with them. 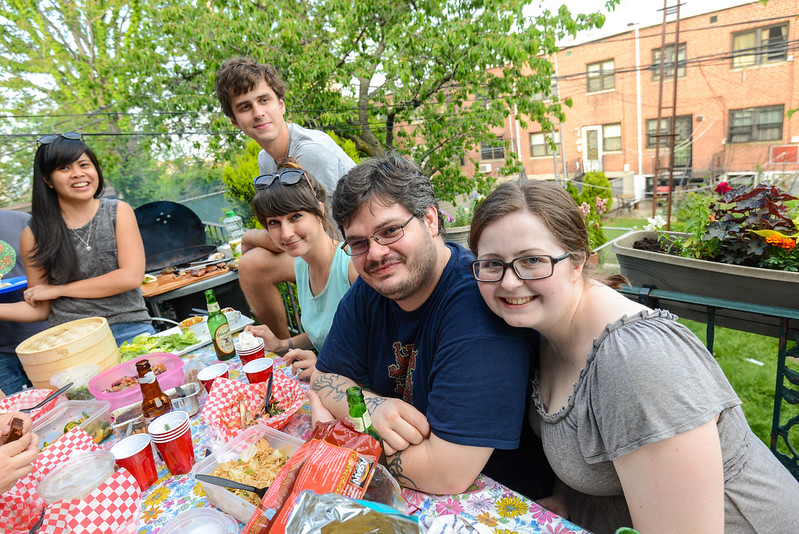 On this side of the picnic table we have Kristin's ex-co-workers from Penguin—Naomi, Joe, Maggie, and her man Patrick. I give it up for those Penguin folks, I don't think there's ever been a bunch as dedicated to the Meatwave as they are. 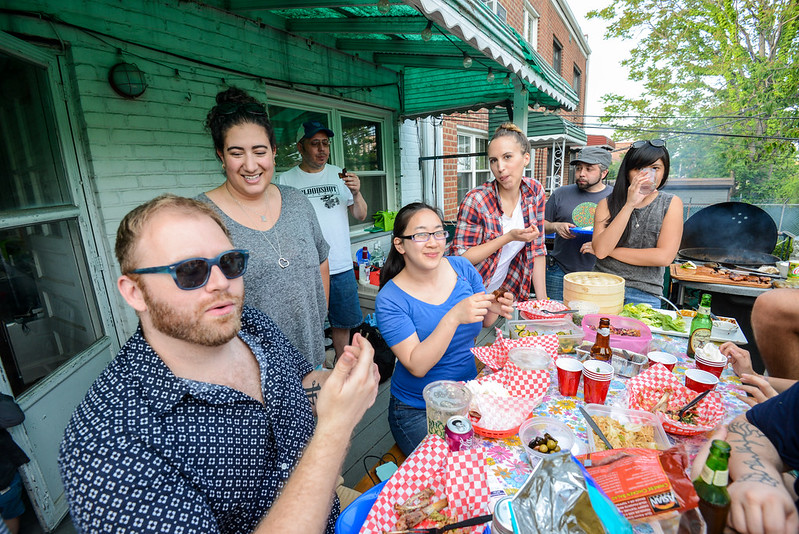 On this side of the table we have Will, Stephanie, Amanda, Emily, and Kristin, with Jon and Chris lurking in the background. 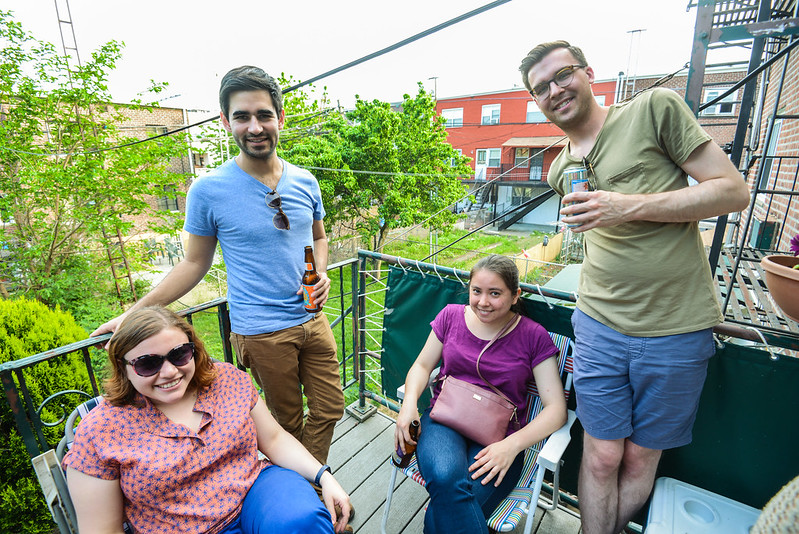 And in this corner is Rachel, Chuck, Clarisa, and ramp-filled egg maniac, Tyson. 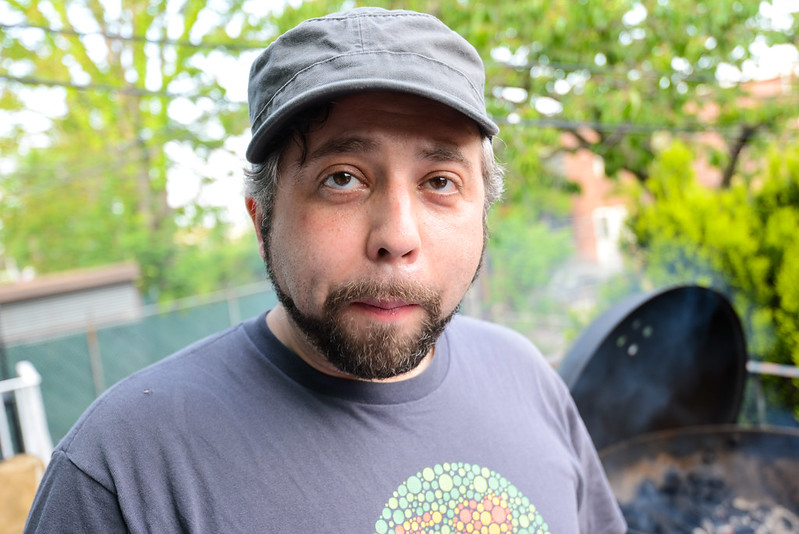 Jonny, looking as good as ever. He's a full fledged surgeon now, so what out, because he'll fix you real fucking good. 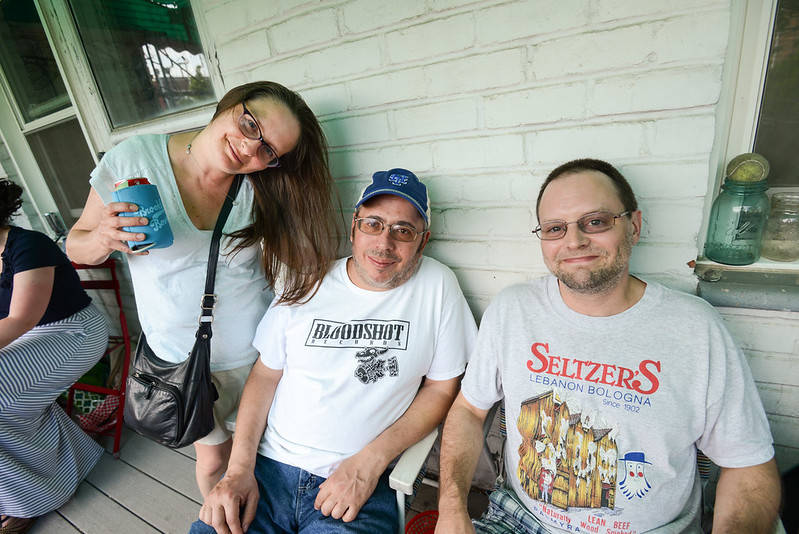 The Island Smoke Ring represented at this Meatwave with Julian, Tracey, and Chris all making it out. I hope to get to their barbecue in Brooklyn next month. 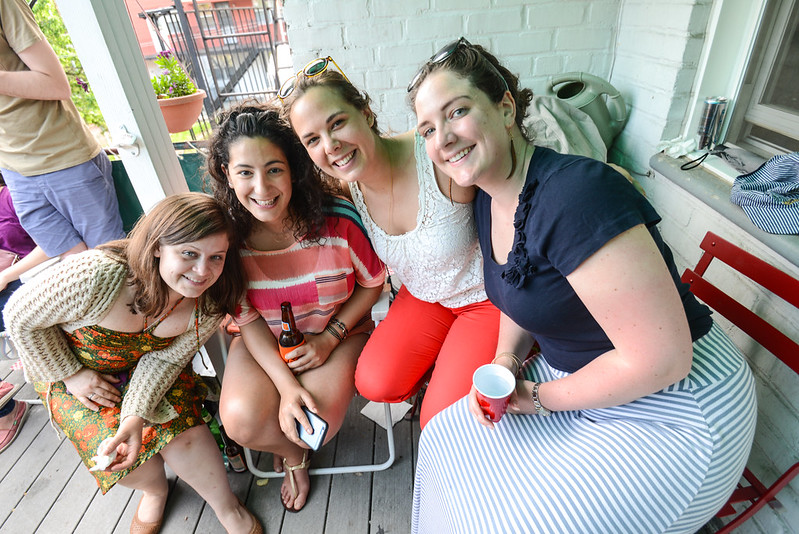 Last but not least is Lisa, Christina, Vicky, and Catherine. Whew, that was a lot of people, and I think I even left some out. It was a hell of Meatwave and was such good times it has me looking forward to all that's in store during this season, which may come with some big changes, but more on that later...