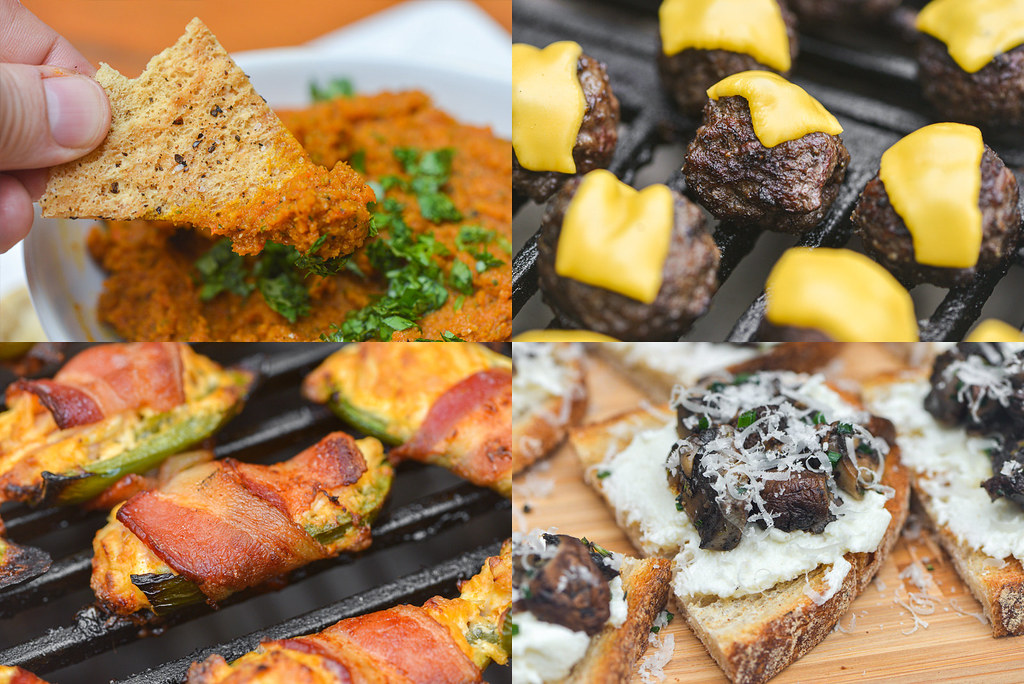 It's going to be an unusually busy fall for me, but I really wanted to get one more Meatwave in this year even though there were very few dates where I could make it work. I also wanted to host at least one event on a brisk fall day where we could transition from daytime eats to a night time fire. After conferring with friends, I picked this past Saturday to host our seasonal closeout, but as the day approached, I got nervous because not only was it not cool, but the hottest days of the year were the few prior to the cookout. Then the stars aligned and Saturday ended up be a great crisp fall day for our first cocktail-party themed Meatwave where I served up a menu of finger foods, everyone dressed up, we downed delicious drinks, and finished the night with a campfire and s'mores to put the perfect cap on another great season. 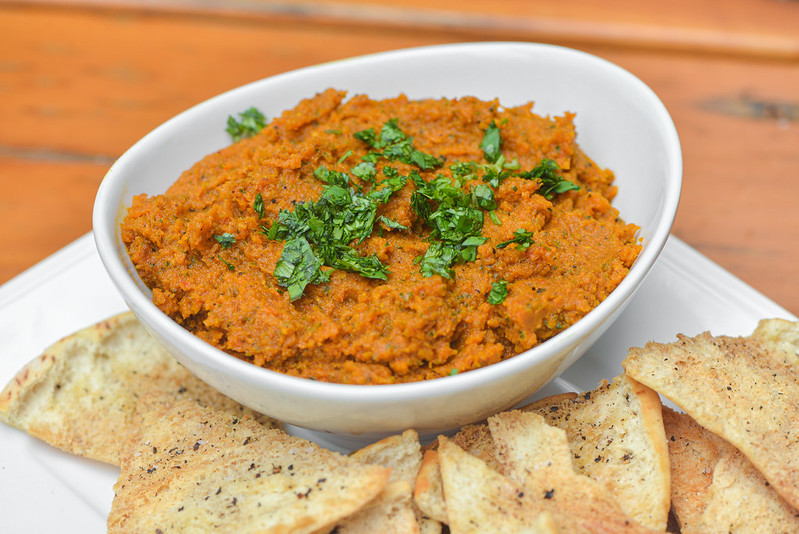 Finger foods are my jam, but they're also sometimes the most annoying things to serve at a cookout because, unlike a giant piece of meat I can slice and serve quickly, I usually have to craft a lot of small, individually portioned items that feels too time consuming and tedious when I also want to hang out with friends. When I finally decided to just go for the cocktail party-themed menu, I had way too many ideas and couldn't bring myself to cut down the list of offerings significantly, so instead I concentrated on making many things that could be prepped in advance and would be good either hot or at room temperature. One such item was this spiced grill-roasted carrot dip that I made a few days prior to the event. I actually think the interplay between the spiciness of the harissa and the sweetness of the carrots got better between the time I made it and when it was served. 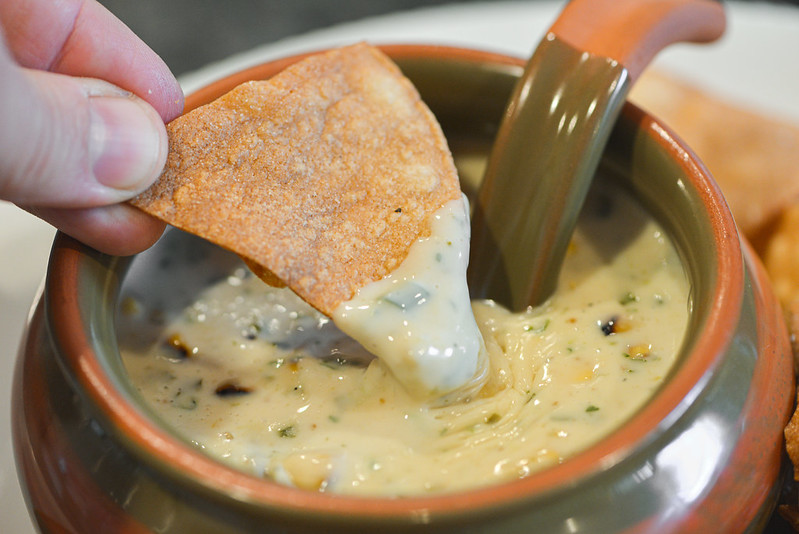 Another entry in the dip category was this charred corn and green chile queso. I discovered Velveeta Queso Blanco over the winter and used it to make a dip for a Super Bowl party that was very well received. It was so good that I made it again for a party a few months later, and then when one of my first guests arrived at The Meat Ball, I heard her say something along the lines of "And there's Josh's famous queso!" In not a lot of time, this dip has garnered a well deserved reputation that makes me excited to share the recipe soon. 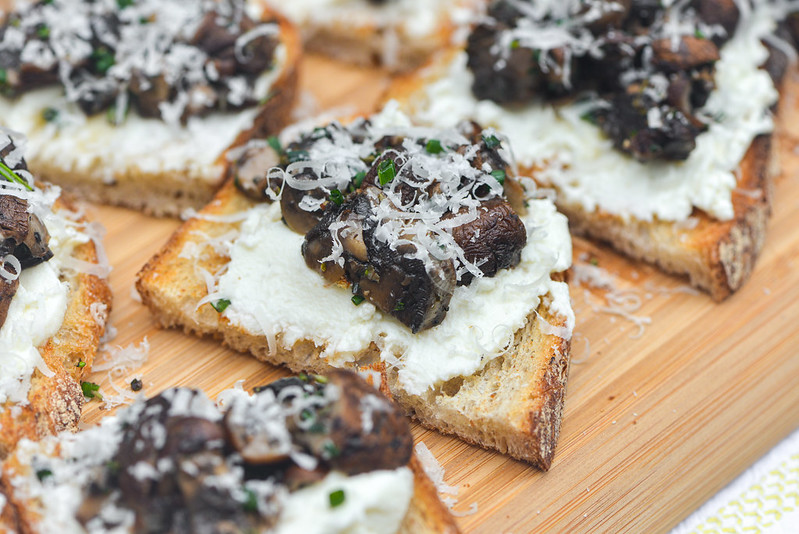 Next up were these herbed mushroom and ricotta toasts. I had made some delicious herb-crusted mushrooms as a side for a steak dinner one night, and thought that recipe could have legs in other applications. I was proven right when they only got better when used to top some toasted sourdough with ricotta, honey, and parmesan. The play between earthy, sweet, and herbal was really excellent here. 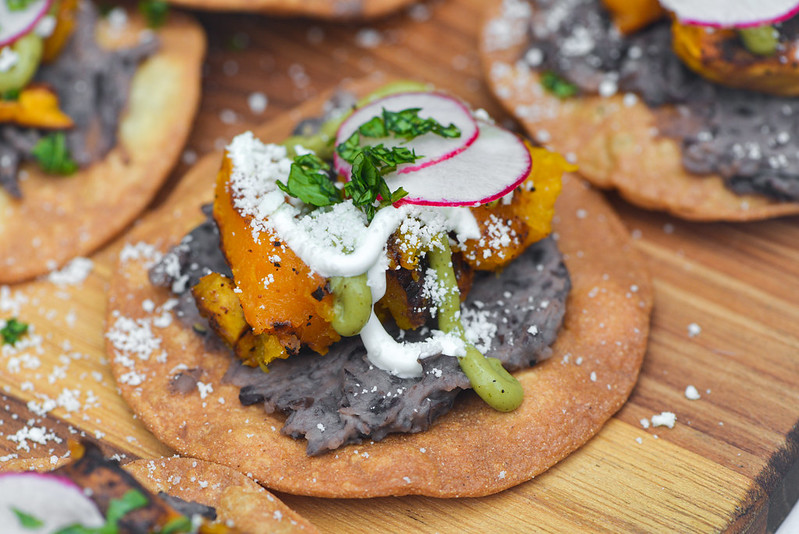 Along the same lines as the mushroom toasts were these butternut squash tostadas. Instead of bread, fried corn tortillas were adorned with refried black beans, chili-spiced grilled butternut squash, avocado salsa, sour cream, cotija cheese, and radish slices. I was assembling these right when guests began to arrive and they were just as good then as they were later in the day after sitting out for awhile, making them a great and impressive choice for parties. 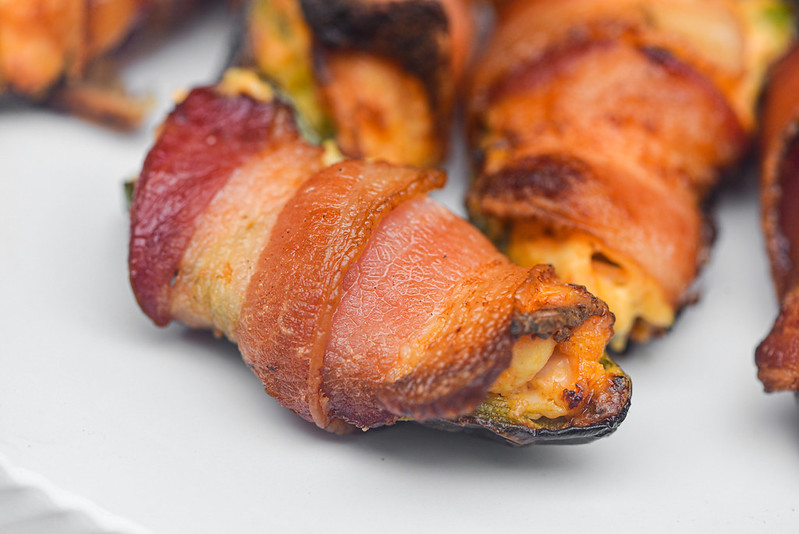 Jalapeño poppers are a go-to for me for so many parties. At this point in time though, I've done some many variations I wasn't sure I could get something new out them for a future recipe post. Then I thought of a grand idea—stuff the jalapeños with a buffalo chicken dip instead of just cream cheese. Man, what that a great idea, and I went the extra mile and smoked my chicken, giving them an even more amped up flavor. 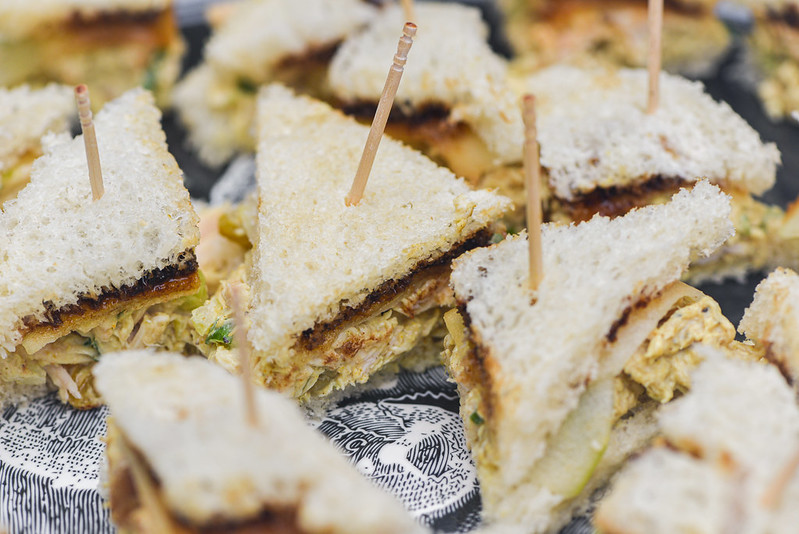 That smoked chicken also went into making these curried chicken salad sandwiches. The earthy spice of curry powder made a great pairing with the smoky chicken, and then became even better when married with tart apple slices and tamarind chutney in sandwich form. These were also an easy make-ahead dish and simple to transform into bite size portions—just cut one sandwich into four triangles! 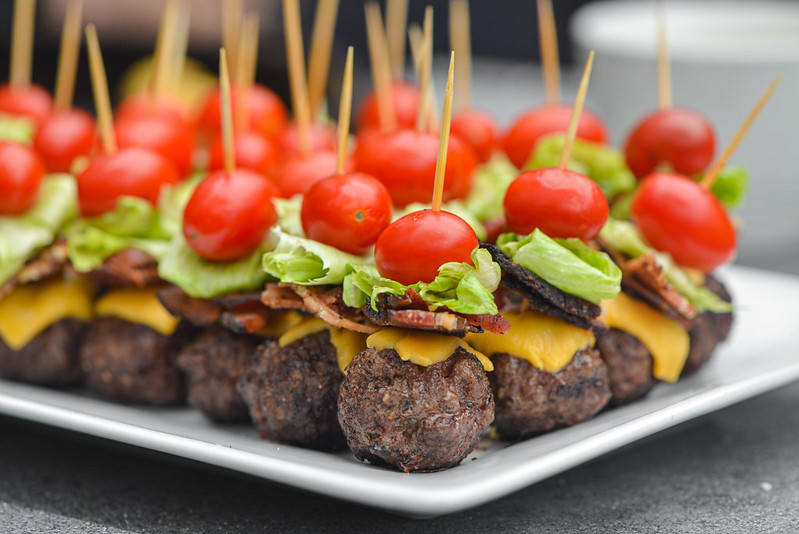 I figured I needed at least on meatball at The Meat Ball, so filled that requirement with these bacon-cheeseburger meatballs. I actually saw a photo of these when searching for some recipe inspiration, and thought they probably looked cooler than they would actually taste, but surprisingly, they were great in their own right. I thought the absence of a bun would make them feel incomplete, but that wasn't the case—they really felt like their own thing with the extra crusty sear on the meat, creamy American cheese, and small tastes of bacon, lettuce, and tomato. I almost left these off the menu at the last second, but was glad I didn't drop them because they were certainly a hit. 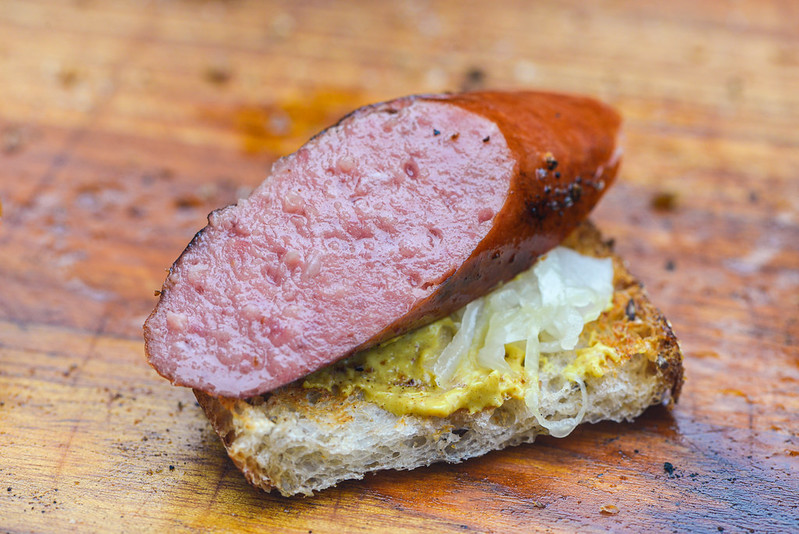 These kielbasa bites also were teetering on being left off because I thought I probably had too many recipes for me to handle in one day, but I really, really had a hankering for kielbasa and these really hit the spot for me. Back in New York, the arrival of fall meant even more days spent at the nearby Beer Garden, where I would always get a grilled kielbasa that came with rye bread and mustard, so I just recreated that combo in bite-sized portions with the addition of sauerkraut for good measure. 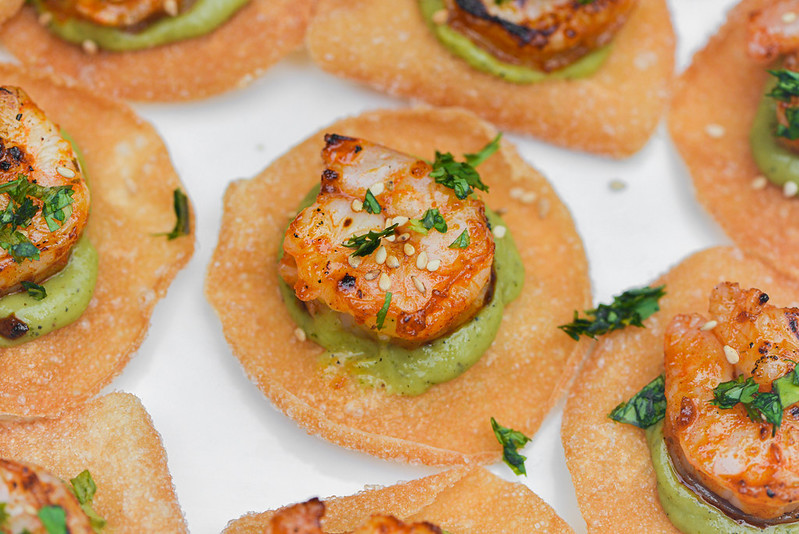 And for this recipe round-up, I saved the best for last—sriracha shrimp wontons. I topped small fried wonton rounds with the same avocado salsa I used for the tostadas and shrimp that I grilled up and basted with a sriracha glaze that was part of an enduring and loved recipe I crafted for wings many, many years ago. I obviously taste everything I make at the Meatwave, but I really don't like shrimp all that much, so thought I'd have one wonton and be done just so I could write about how it came together, but man, these things were so delicious I downed at least five of them. When constructing them, I thought I had overdone it with about 70 shrimp for my 15 or so guests, but these completely disappeared by the end of the day. 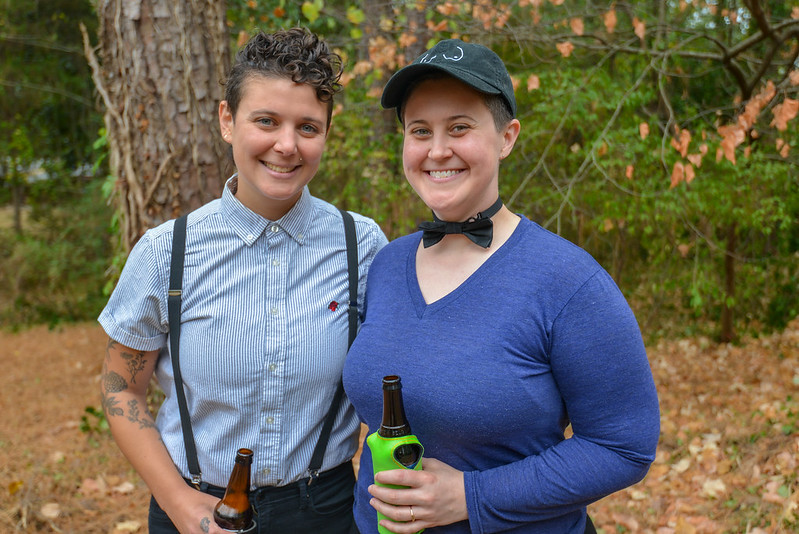 I had put on the invitation that cocktail attire was optional and didn't really expect anyone to dress up, so was surprise and thrilled so many folks showed up looking sharp for what really was just a backyard cookout. Chelsea and Christina were looking great, and after going through all my photos, I realized they were a good representation for an uncoordinated theme that seemed to be going on—dark blue and bowties. 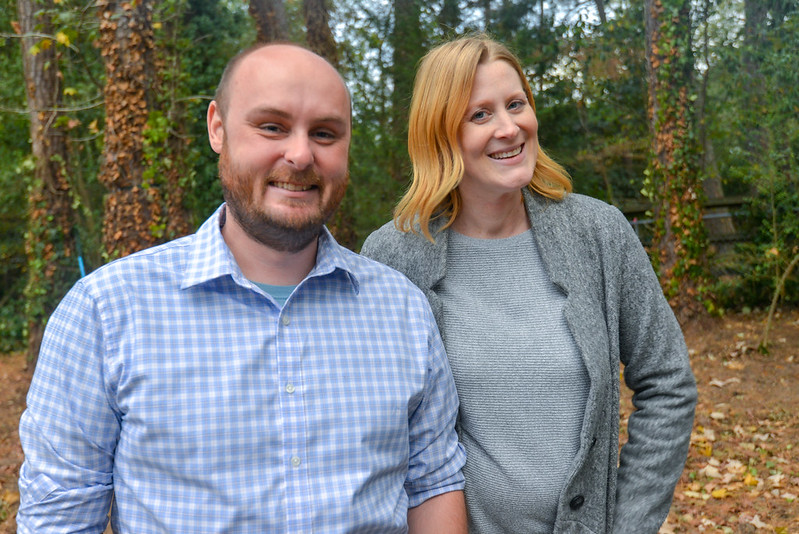 Next we have Lindsey and Ryan, who will both be parents by the time The Meatwave starts again next year since they're both expecting babies, one in February and the other in March, respectively. 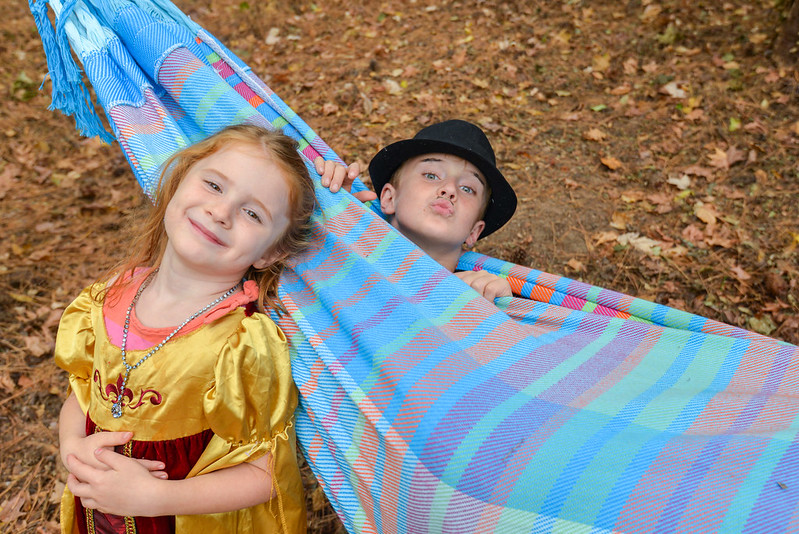 Annabel and Benji took dress up to the next level, with some Halloween practice thrown in, when they arrived in full costume. I was also happy they were enjoying our hammock—I had bought it over the summer, but until this past week, it's really been too hot to be outside in it. 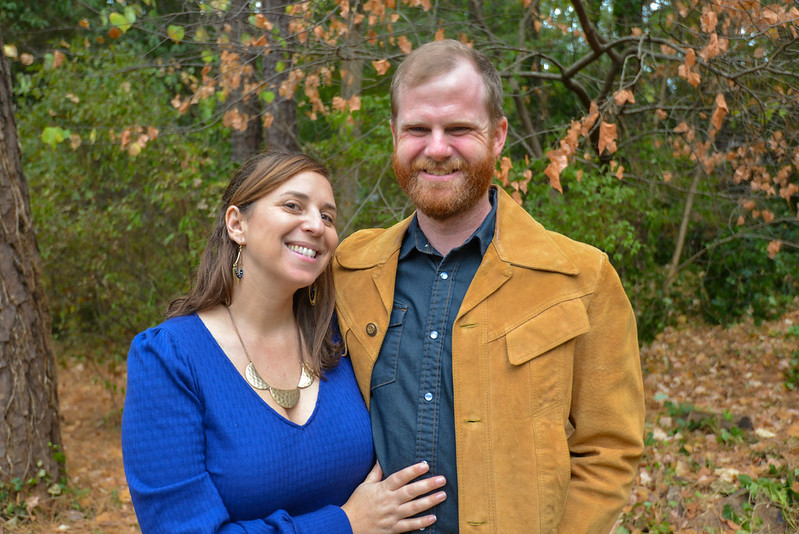 Their parents, Jenny and Bryan, also came looking fine. I forgot to take photos of all the cocktails we also had—many guests shared their own creations—but Bryan made a winner with a bitter beer cocktail that tasted perfect for a fall day. 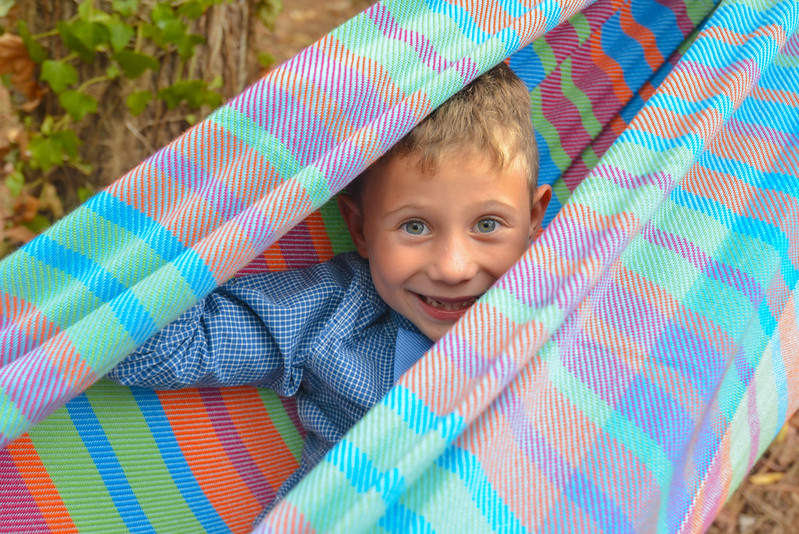 Cy got in on the hammock action too, and amazingly, also showed up in a bowtie! 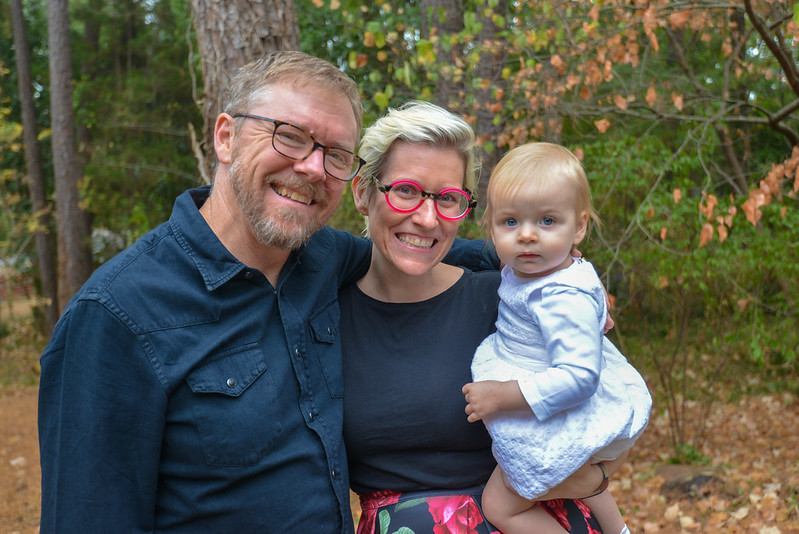 Steve, Leslie, and Brooks are one happy Meatwave family. This is now Brooks' second summer of Meatwaving and I think she gets an award for having the most Meatwave attendances prior to turning one, a true feat to be proud of. 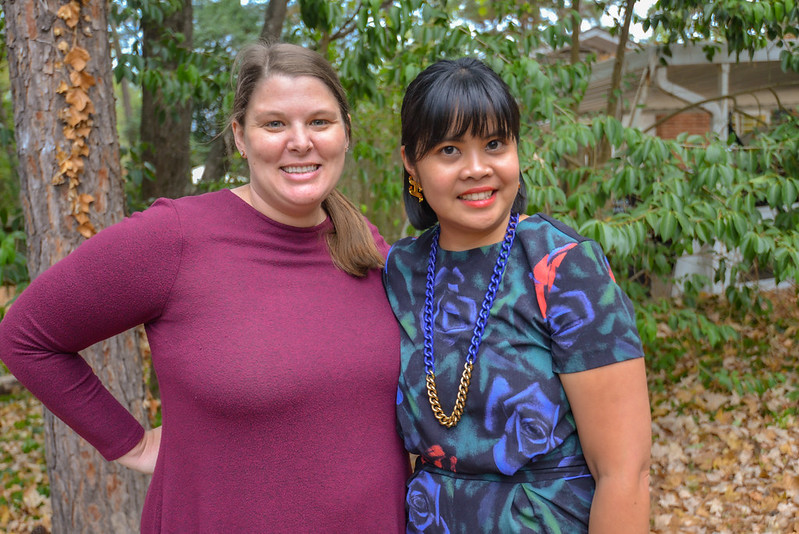 Juliana and Kris are up next. So glad Juliana was able to make it after just returning from a trip, and next year it'll be her turn to have the youngest Meatwaver. Who knows, maybe they will give Brooks a run for her money on best baby attendance? 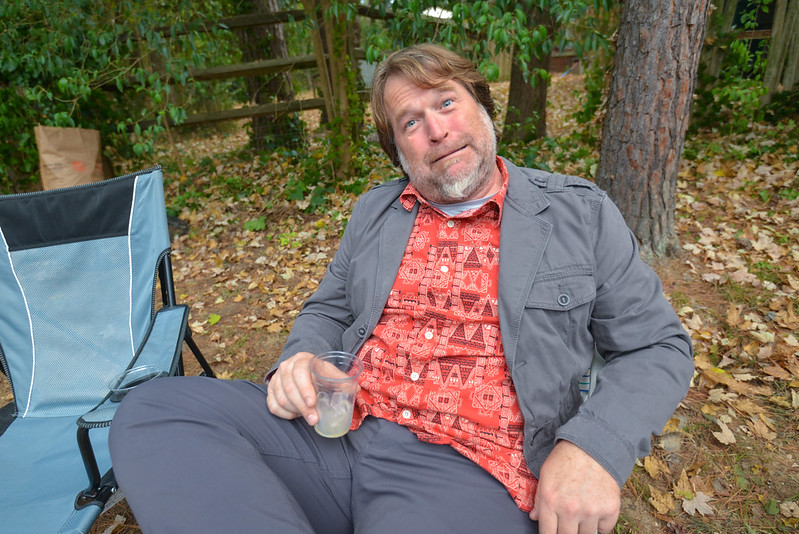 Josh is all goofy smiles following an afternoon of good food and cocktails. He brought along a delicious take on a white Russian that was unassumingly boozy. At the end of the evening, I switched over to that semi-sweet dessert cocktail and downed one after another, not realizing until after I got up from my chair at around 9:00pm how much I had actually just drunk. It seems like Josh has a way of getting you to drink more than you realize, which I guess is an ideal quality for a bar owner. 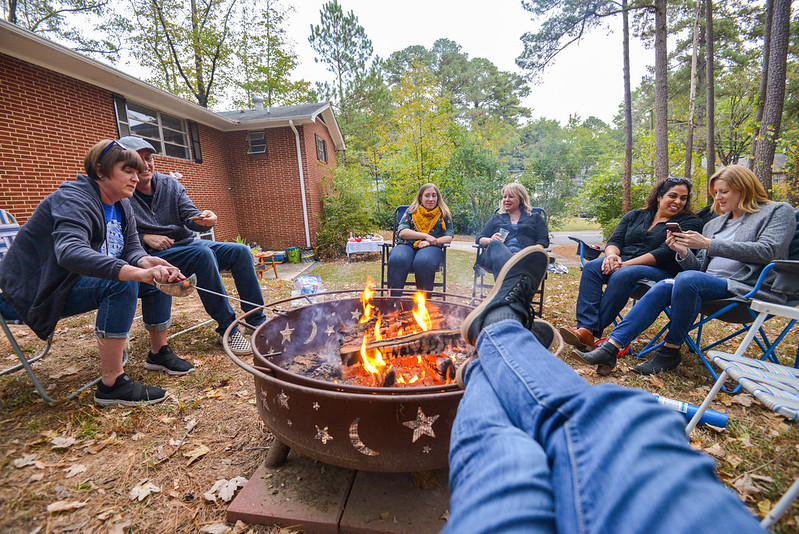 I was so excited to get a fire going as the day began to get chilly in the early evening. I had a large stash of fire wood and ended up going through most of it as we settled in by the warming flames for many hours. Around the fire in this photo we have three new Meatwavers, Heater, Kevin, and Samiha, and also a few devotees, Christina, Mary, and Lindsey. As the day transitioned from cooking to sitting by the fire, I realized it came together exactly how I had envisioned it and I couldn't have been happier. It's always hard to put a Meatwave season to rest, but I'm so lucky to have so many great friends to share good times and good food with that my heart stays warm all winter long knowing that we'll repeat the entire thing again next year and how that opens up limitless possibilities of new recipes and new friends, both driving forces that have me committed to keeping the meat flowing year after year.