The Meat is Back in Town 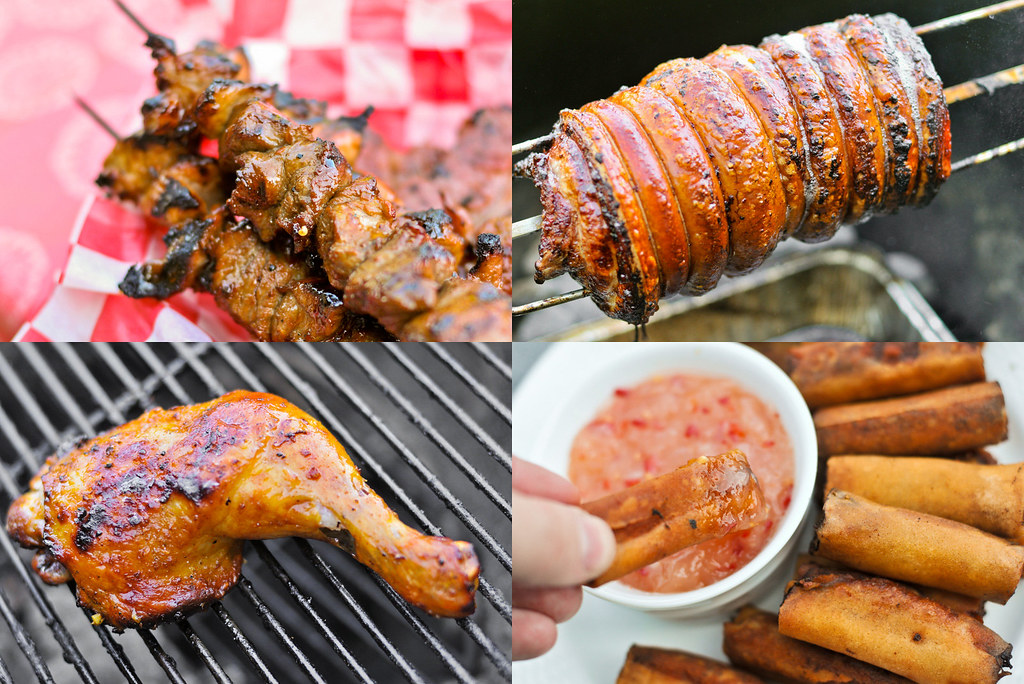 Ok, so the Meatwave kinda-sorta started a couple weeks ago with Meato de Mayo, but that was a last minute call to enjoy some nice weather and skirt steak. The for real, official start of the Meatwave was this past weekend with The Meat is Back in Town. Having already put together one tremendous meal already, I felt the need to outdo myself, and that I did with a Filipino feast unmatched in Meatwave history. 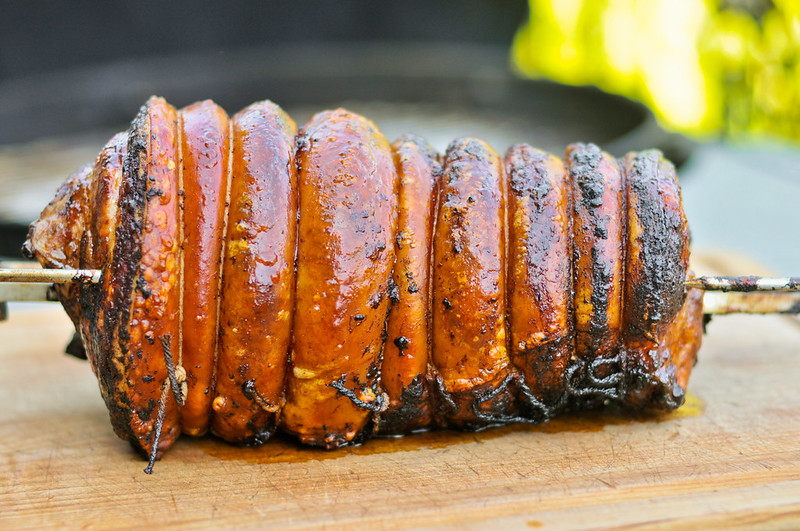 The Filipinos know their meat, and in particular, their pork. If you haven't had a Filipino lechon—whole roast pig—you have not lived life to its fullist. In my experience, a lechon brings out family and friends from every crack and crevice, and while I'm sure a whole pig would get a decent turnout here, I still don't think my friends can rival the size of Filipino family. So if I wanted to do lechon, I had to go smaller, yet still thinking big. This led me to a hunk of pork belly that I spread with a garlic paste, rolled up, and cooked on the rotisseries until the skin was extra crisp. This, my friends, is lechon liempo, and it is truly a glorious thing. 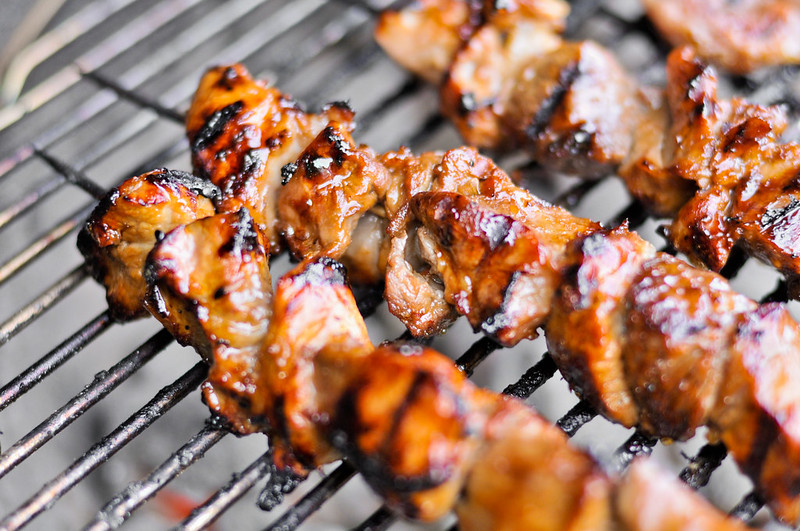 It's been way too long since I last made these Filipino BBQ skewers, my go-to side dish at any Filipino restaurant. Soaked in a sugary, complex marinade, they grill up to be savory sweet sticks of pork shoulder that are incredibly addictive. 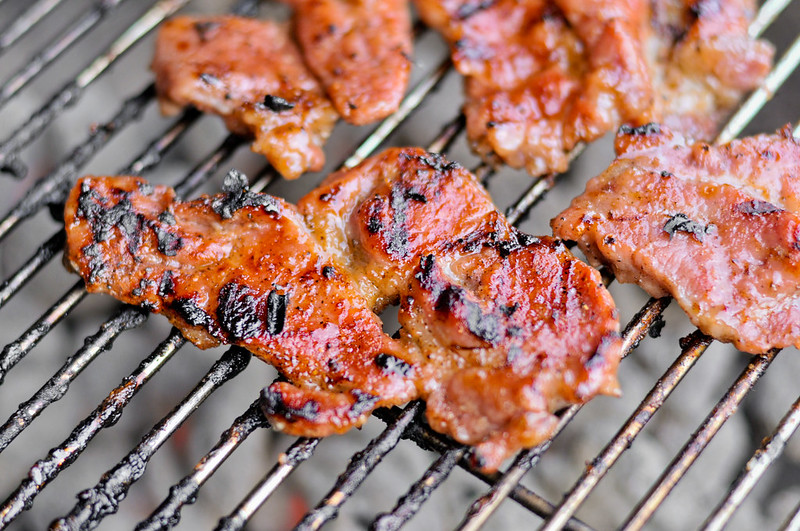 I bought a whole pork shoulder and split it up evenly between the BBQ skewers and this tocino—a favorite breakfast meat of mine. Cured in a sugar and salt for three days, the tough pork shoulder finds an final consistency that has just the right balance between tender and chew. 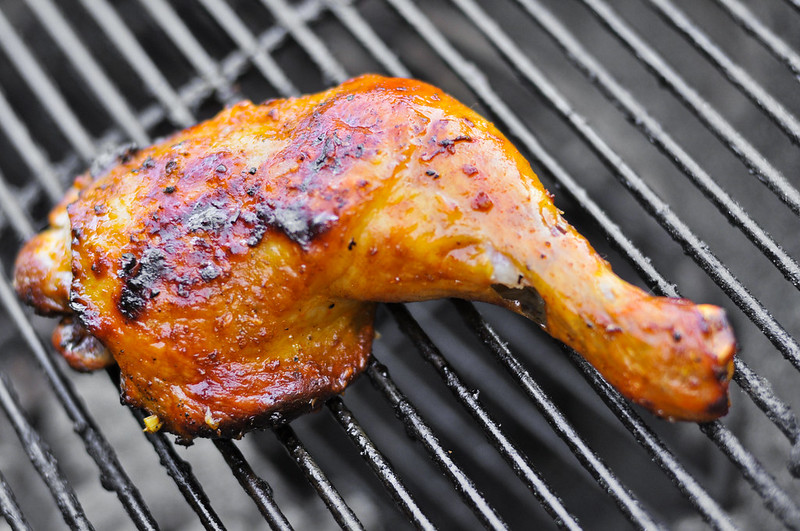 If you're going to a Filipino cookout, you better be down with the swine, but for those who may not be, I also grilled up some chicken Inasal. Stepping away from the usual sweet, this chicken is marinated in a tangy concoction of achiote oil, lemon grass, calamansi, garlic, and ginger. Some of this permeates in the meat, but mostly it creates one killer chicken skin filled with flavor. 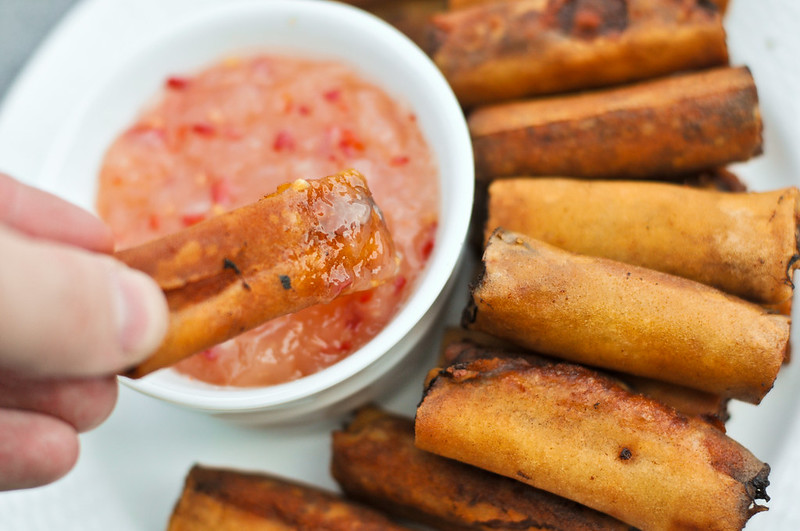 Now for meat in another form, as Lumpia Shanghai. The only thing not homemade, I picked up one package each of chicken and pork eggrolls from the Phil-Am Mart in Woodside and fried up batches throughout the day. However, I did make the Thai sweet chili sauce that's required for dipping Lumpia. 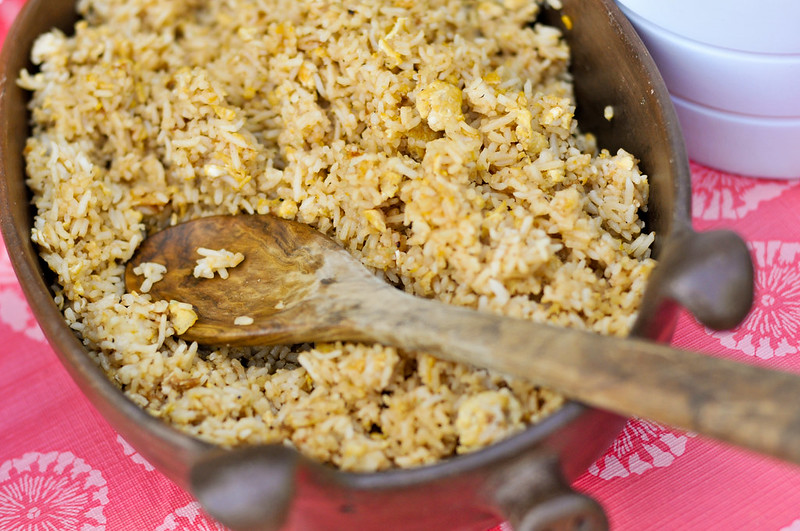 It's not a Filipino meal without rice, and there's none better than garlic fried rice An entire head of garlic went into here, along with egg and soy sauce, to create a simple, yet addictive side. 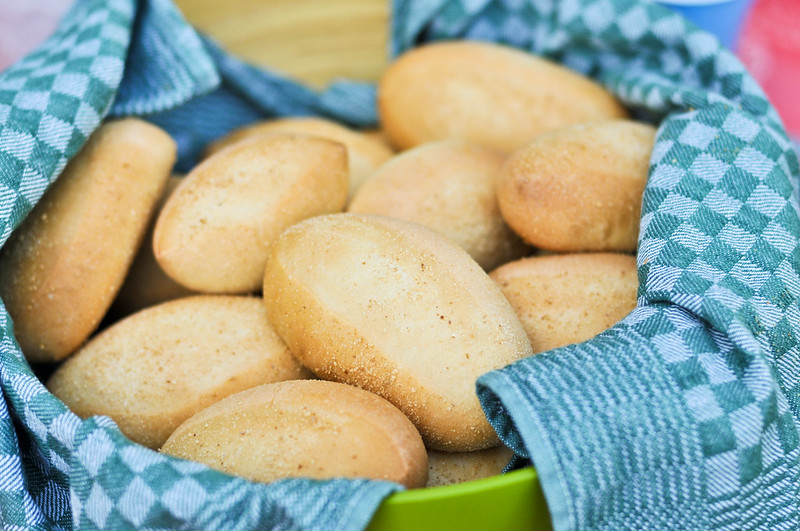 Over the holidays I found out that my Mother-in-law's family used to have a bakery, and she was well versed in the art of pan de sal—semi-sweet Filipino rolls. This skill was not passed down to my wife, but it must run in her blood as she made some awesome pan de sal on her first try. I don't know if I can go back to store bought after having these out. 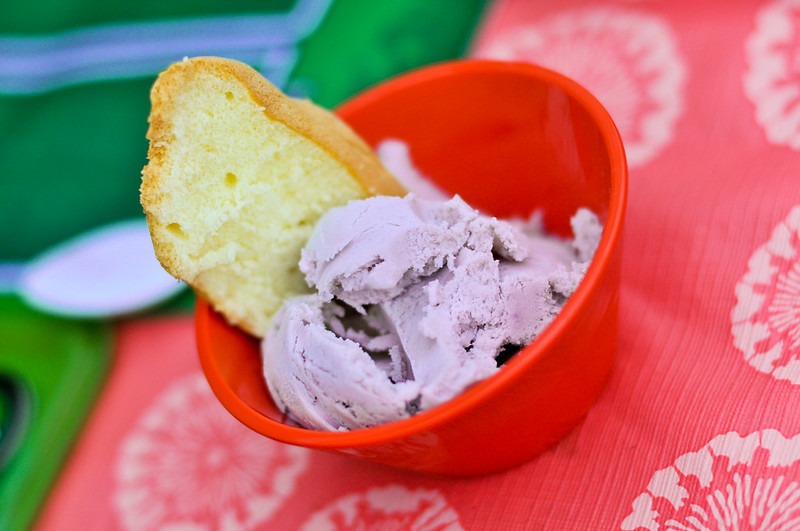 So much meat, it's crazy we even had room for dessert, but we all found the space somehow when the ube (sweet purple yam) ice cream was busted out. I ate mine with a piece of mamon, a Filipino sponge cake procured by Karla and Craig in Woodside on their way over. 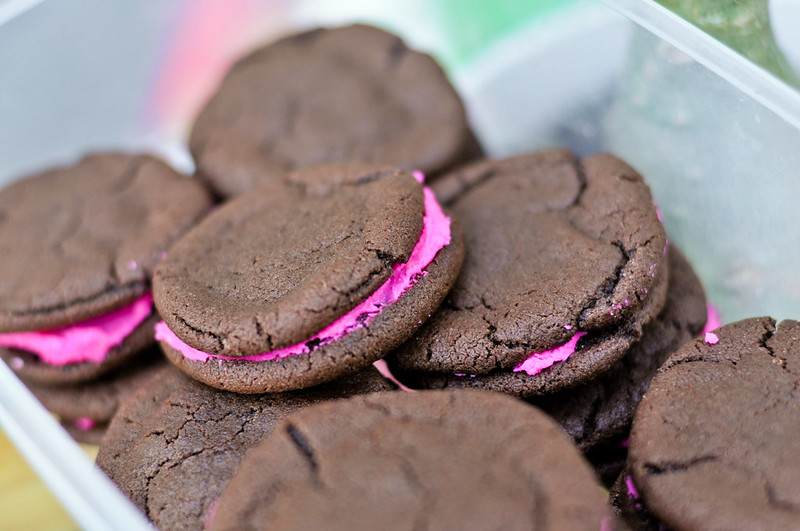 As if that weren't enough, my Sister and Chunk made these insane homemade Oreos. They were like a regular Oreo, only about four times the size and with a slightly soft, fudge-like cookie that melted in your mouth. So good. 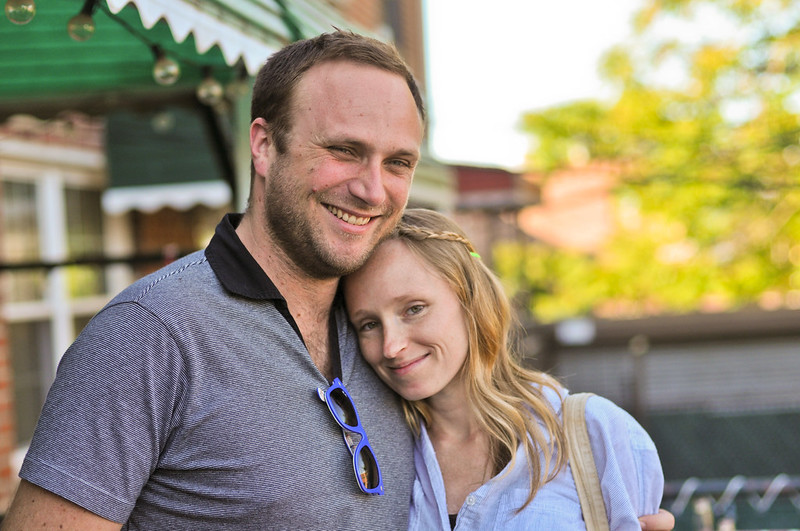 And now for the line-up of insane folks willing to gorge themselves and wallow in our collective gluttony. First we have Karla and Craig, fresh off scrapping one Crown Vic and picking up another—the perfect car for the perfect couple. 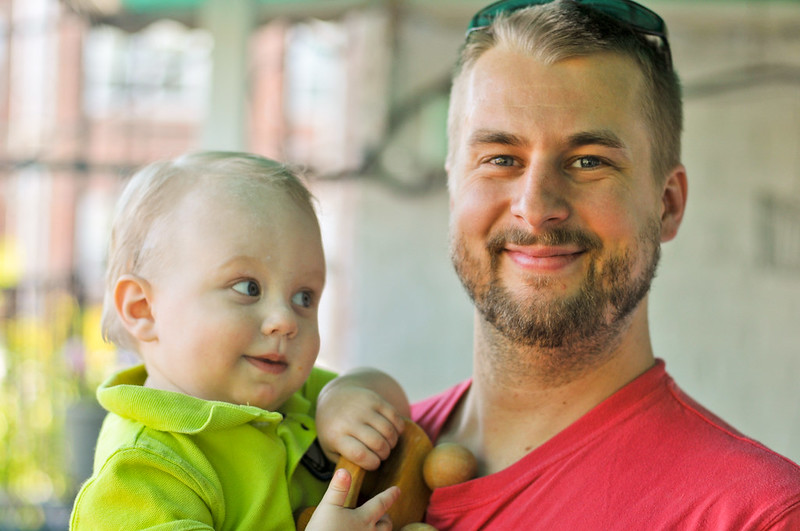 Then we have Nick and Marley. Marley had a bit of a rough start at the Meatwave last year, so I was so happy to see him be nothing but smiles this time around. Of course Nick followed suit, which was a given with the sea of meat crashing upon him. 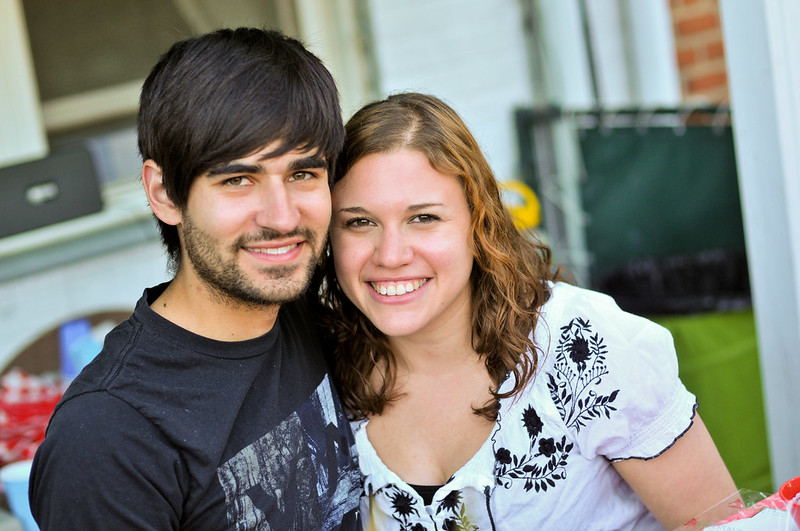 My Sister and Chuck are next up, who came in tow with a giant jug of vodka spiked hibiscus tea and those Oreos you saw earlier. The former got me a bit drunk by the end of the night, leading to way too much intake of the latter. 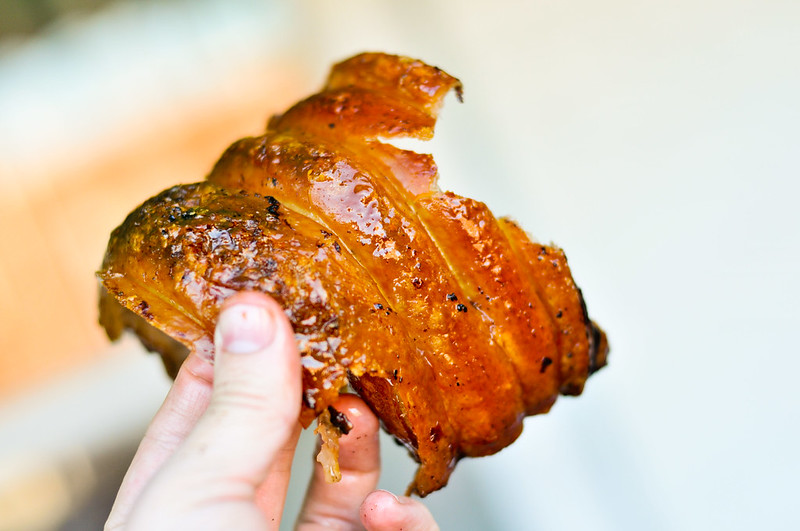 By the end of the day, we had worked ourselves through almost all of the meat I prepared. I was amazed we got through nearly all of the seven pounds of pork belly, but we made a good judgement call for the little that remained—take off the skin and just eat that. Relishing in that crisp, salty, and flavorful pork rind, I took in all that came before and felt a sense of pride in the meal that came together, well pride and an every-increasing gut.