The Meat Shall Inherit the Earth 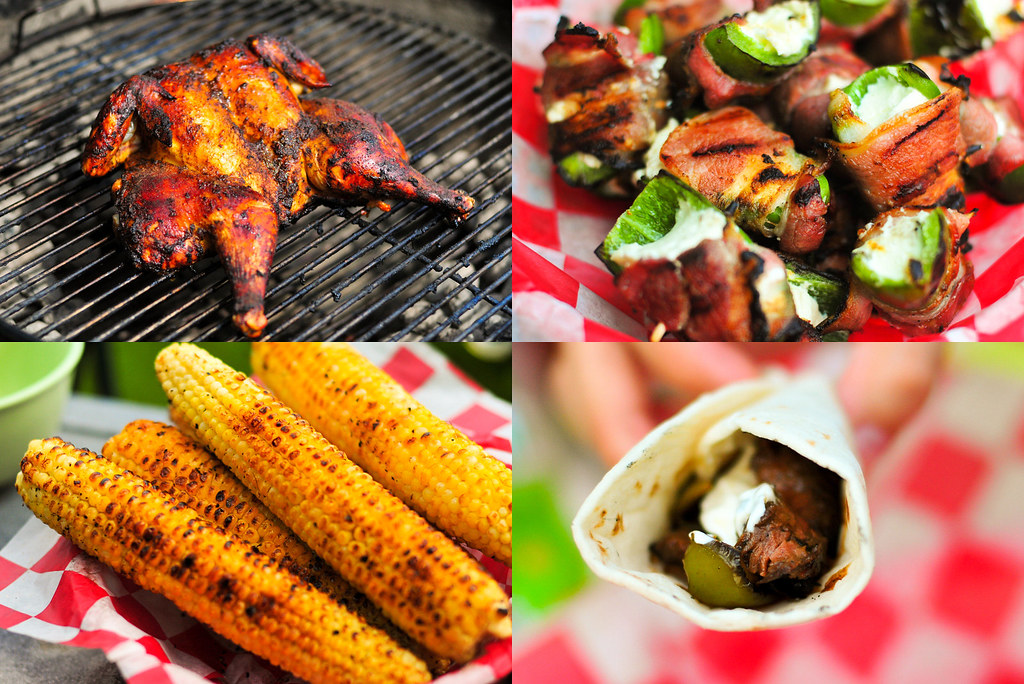 It was only a matter of time before it happened, we've all been enslaved by the meat! I, for one, welcomed out new meat overlords, and quickly adapted to the new world order by grilling up a smorgasbord of Tex-mex and Mexican meaty treats for The Meat Shall Inherit the Earth. 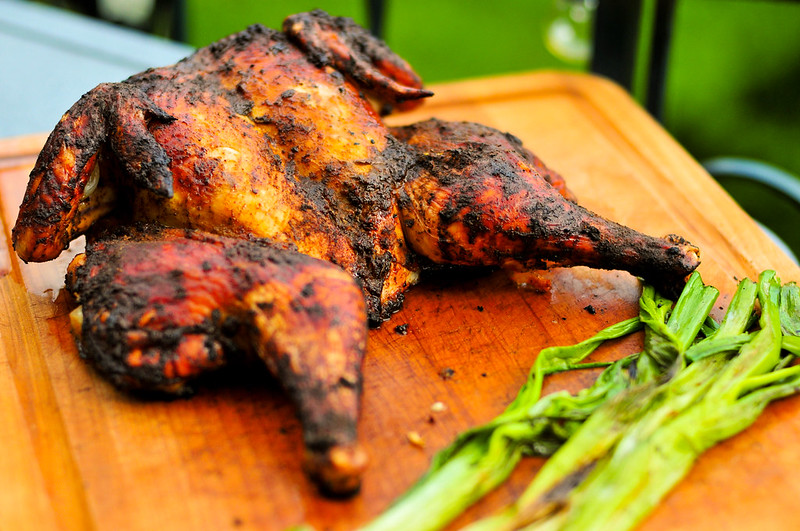 I was so so excited to make some fajitas, skirt steak being my favorite steak to grill, and fajitas being my favorite way to enjoy skirt steak. That would have been my only meat of the day, but one Meatwaver in attendance didn't dig on the beef, so I made this Mexican Roadside Chicken that I've previously passed off from Rick Bayless's Mexican Everyday. Even though this recipe finally killed my copy of the book, I couldn't stay upset because the chicken was so insanely delicious.

Rubbed down with a mixture of ancho chile powder, oregano, cinnamon, garlic, cider vinegar, and orange juice, this juicy bird was a pleasing mixture of earthy and acidic flavors, not to mention it came off the grill looking like a superstar. 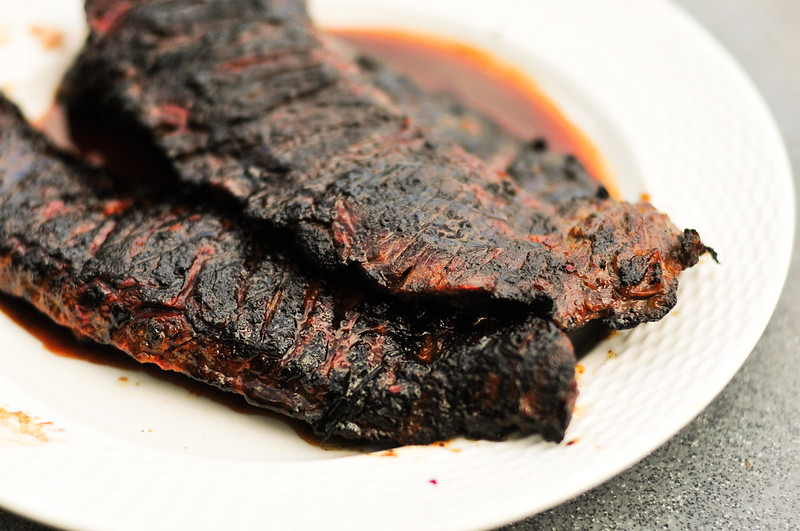 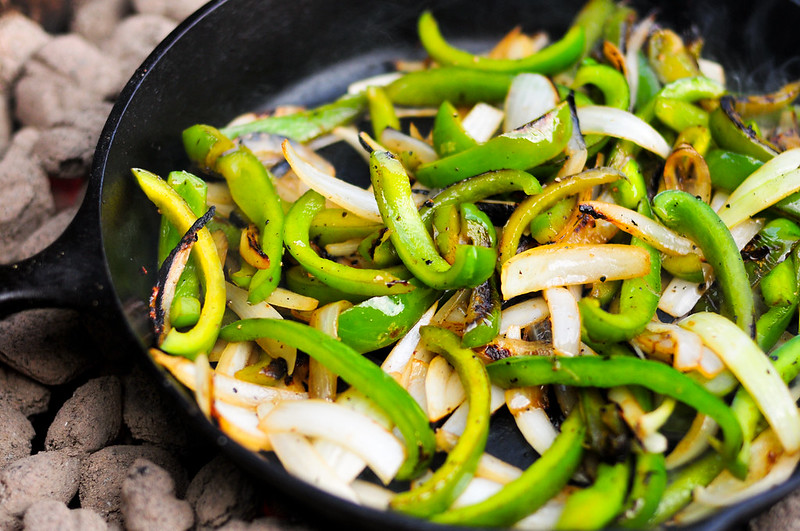 Now that the chicken stole the show, back to the fajitas. I made my standard Alton Brown recipe, which makes the second tastiest skirt steak I've ever had (best was at Ninfa's on Navigation in H-town). Grilled quickly over intensely hot heat, the medium-rare steaks formed a beautiful crust that held all the flavors of the marinade. Piled into a flour tortilla with the sauteed peppers and onions and a dollop of sour cream, these were just as tasty as they always are. 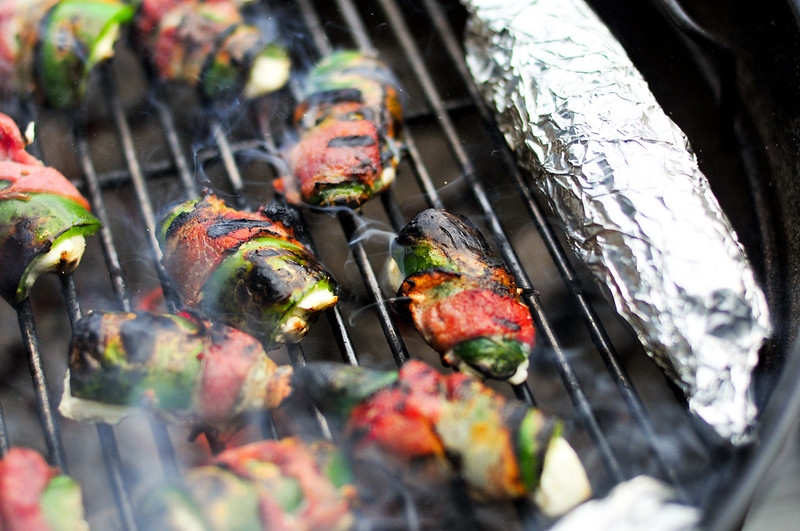 To go with the chicken and fajitas, I decided to grill some jalapeños stuffed with cream cheese and rolled in bacon. I've been on a kick making these in the oven ever since the winter, and this was the first time I brought this exact, simple recipe to the grill. Unfortunately I need to improve my grilling technique for them, since the fatty bacon created some exploding grease fires, charring the meat in a flash, leaving the jalapeños undercooked. Still good, just with a little more crispness than I'm used to, I'm thinking I'll do this over a two-zone fire next time, starting them over the cool side to cook, then over the hot to crisp. 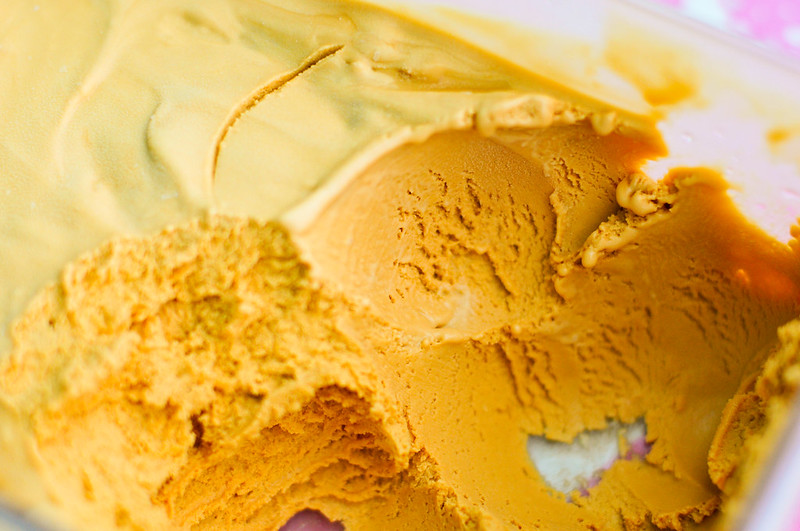 A Mexican menu was another excuse to make dulce de leche ice cream. This is the sweetest and most silky smooth ice cream I've ever made, rich and delicious with a deep caramel flavor that was soothing after a day of spicy meats. 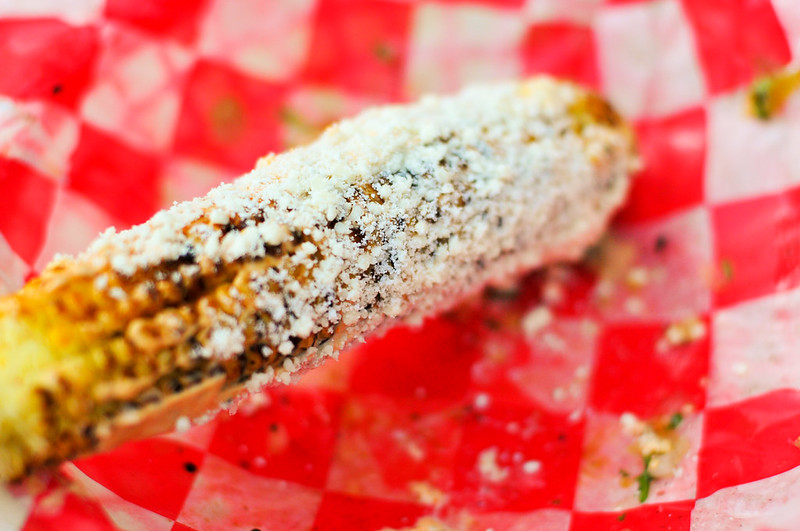 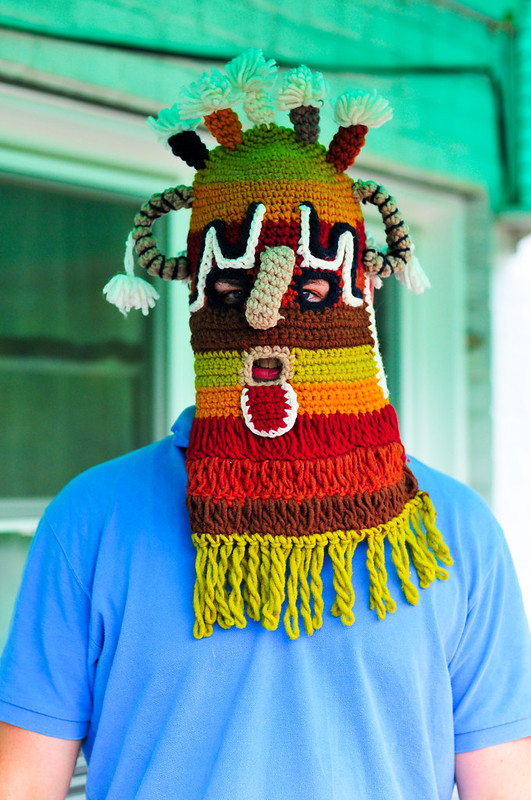 Kevin rode into the Meatwave straight off the farm. With him he brought the onions and peppers you saw above for the fajitas and a bunch of super fresh sweet corn at the peak of their season. We grilled these up, then slathered them with a mayo and cayenne mixture and rolled them in cojita cheese. Truly the best way to enjoy corn, these were some of the best I've had, with the super sweet corn striking a nice balance with the spicy mayo. 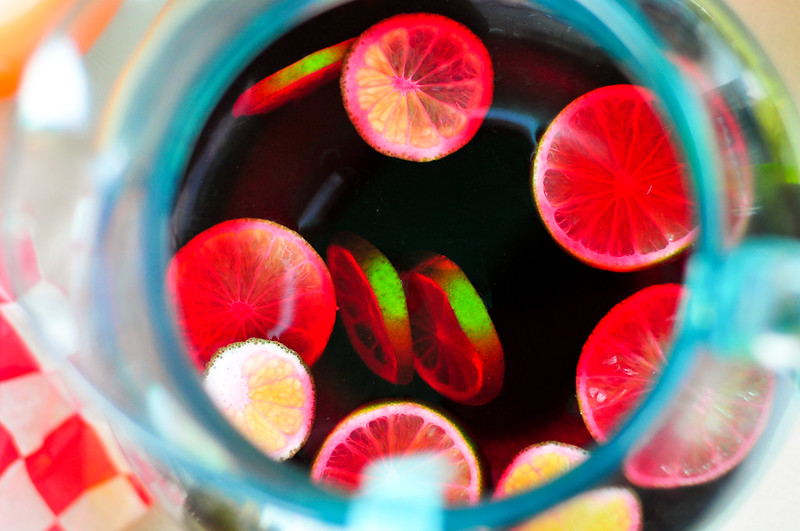 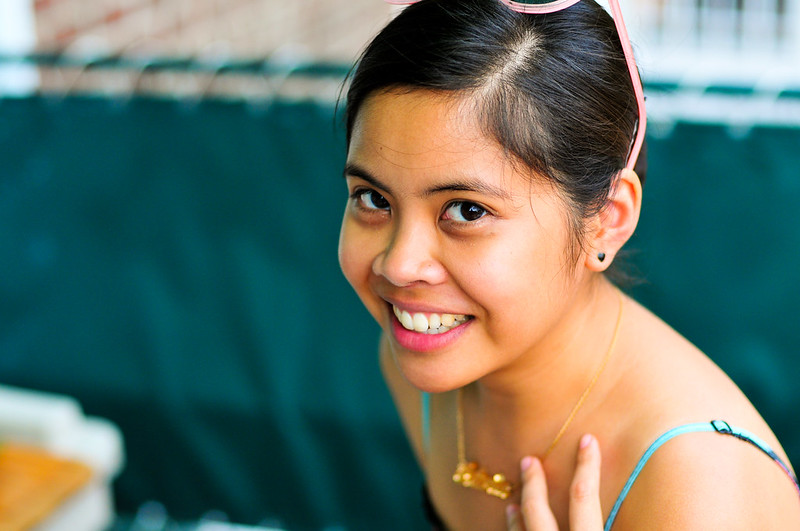 Kris also got into the fiesta spirit by making a pitcher of jamaica agua fresca. A simple drink made by boiling hibiscus flowers in water and sugar, then strained and cooled, this fit seamlessly into the day's menu and provided a refreshment other than our standard beer and soda that's often missing. 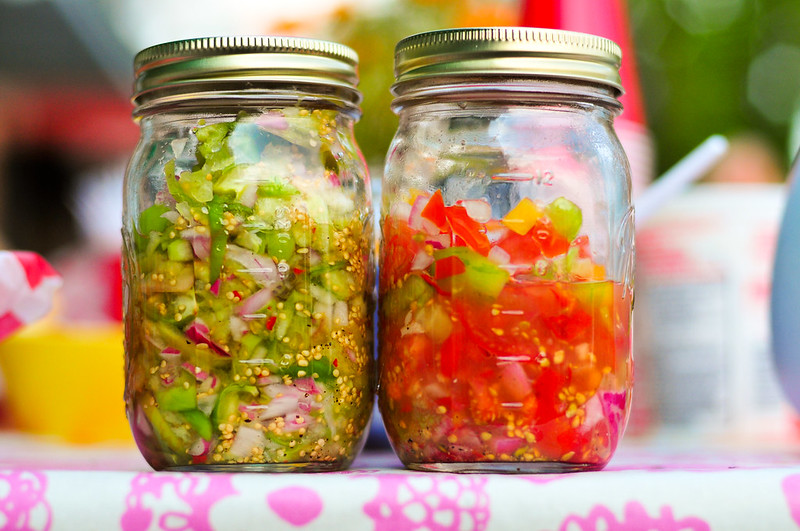 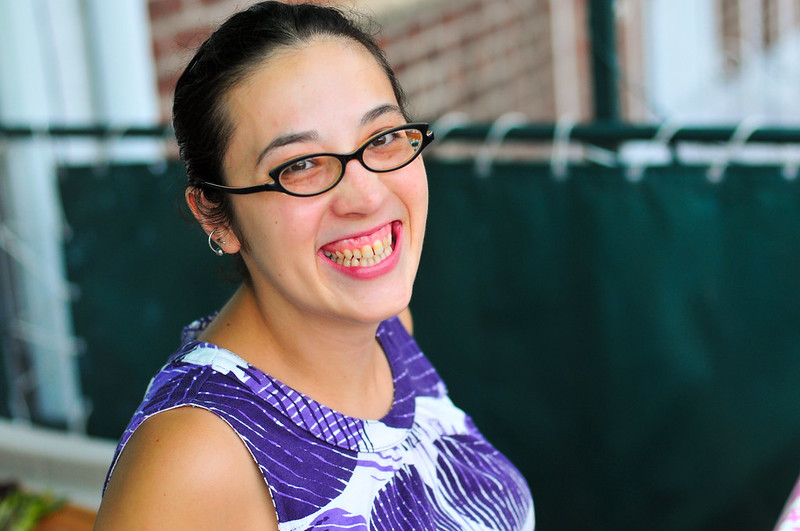 Also in attendance was Kaitlin, whose mad gardening skills rewarded us with two salsas. Also staying on theme, she prepared a tomato and tomatillo salsa that added a nice freshness to the meal.

Hopefully this spread appeased the meat gods; I know it left me and all the other Meatwaver with very happy, full bellies.