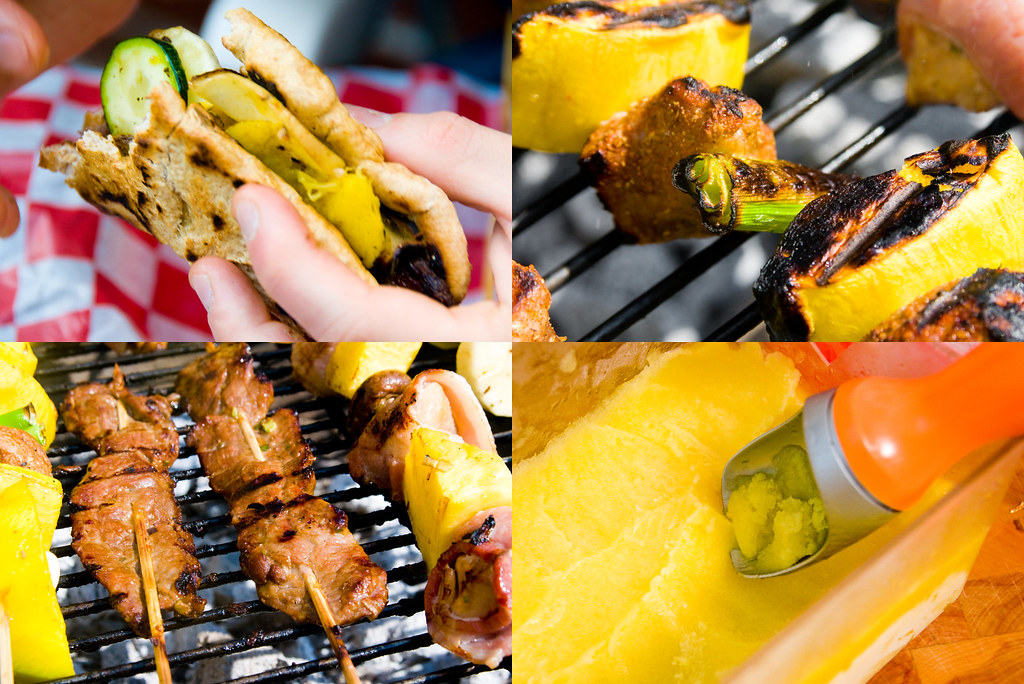 Meatwave premises are always loose. We sit around and ramble off hilarious meat puns that later form into full fledged Meatwaves, but we hardly ever stick to the theme. This past weekend was the Track Meat, where everyone was supposed to bring a favorite song or two that's ideal to eat meat to. This idea was brilliantly thought up by my Aunt Debby (I guess meat puns run in the family), and I was hoping that this one would actually get everyone actively involved in building the ultimate meat-eating-mix-tape. It came as no surprise that no one brought a song (I'm guilty of not participating as well), but with four different kabobs, some homemade pita, and a mango sorbet, this Track Meat was so delicious I wouldn't even have found time to stop eating and compile our playlist anyway (but if you have good ideas for meat eating songs now, please leave them in the comments). 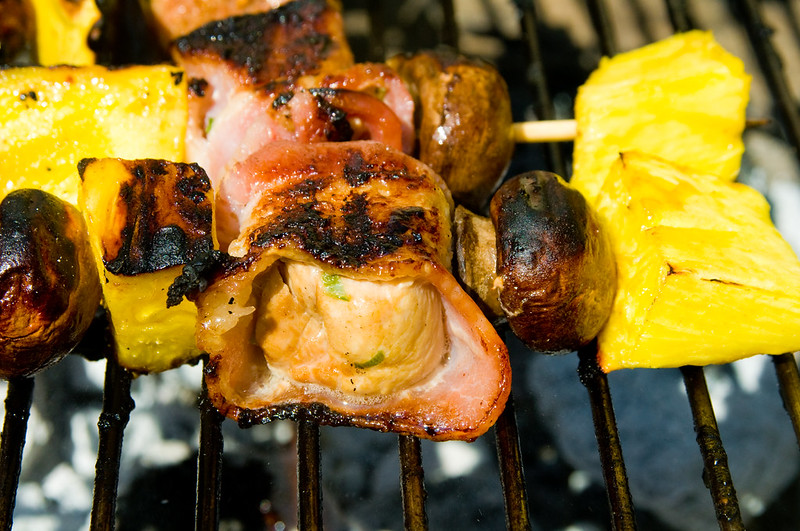 First up, and by far the Meatwaver favorite, was a bacon-wrapped chicken kabob, with cremini mushrooms and pineapple. As if kabobs needed to be anymore tasty, the addition of bacon sealed the fate of this meat-stick, making it the first to run out. I must say, not only was the bacon delicious (duh), but it solved the problem of the chicken being too easily overcooked, since it was continually basting in the bacon fat as it cooked. 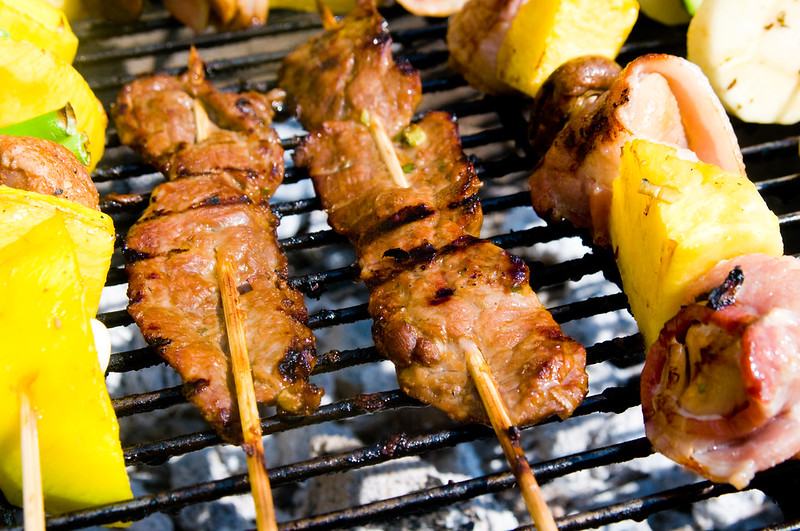 Coming in a close second were the Asian beef skewers. This a must-do skewer anytime I'm making kabobs, since they're easy, cheap, and such a crowd pleasure. The marinade is just a simple mixture of hoisin, soy sauce, and spices, but they never fail to amaze. The thinly sliced flank steak becomes encrusted in the caramelized glaze over the high heat, and each bite is so packed with flavor that any effort to stop eating them is futile. 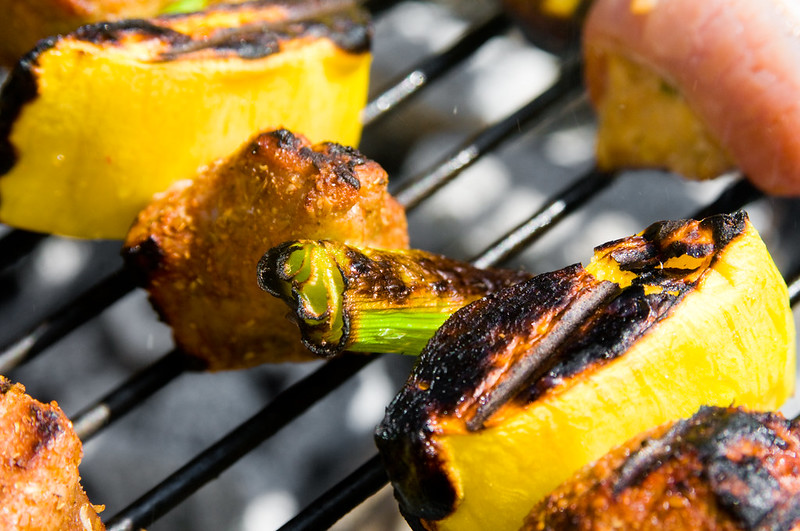 Lastly, I made a pork, mango, and green onion kabob. The pork tenderloin was coated in a dry rub instead of a marinade like all kabobs I've done prior. This turned out a slightly dry meat, but the recipe also suggested a dipping sauce, and when you added that, it all came together quite nicely. I think the real hero of these skewers were the mangos, which I never knew became so succulent after grilled (but I should I have, because that's true for just about anything). 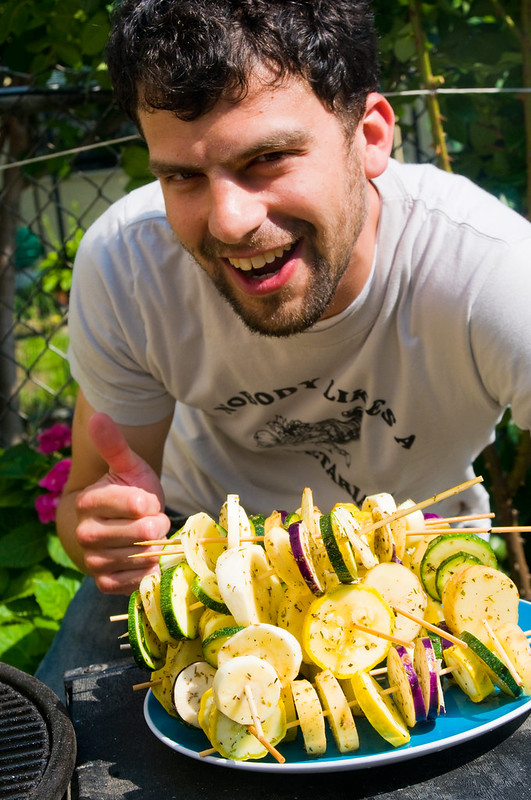 The Mikebot hopped on the kabob caboose, coming in with a bunch of veggies that he sliced, seasoned, and then skewered. Always the forward thinker, he brought a new veggie to the grill, the parsnip. He did a great job with these, they grilled up to a perfect sweetness and tenderness, it also added the "healthy" accompaniment needed when your day revolves around eating lots of thick slices of bacon. 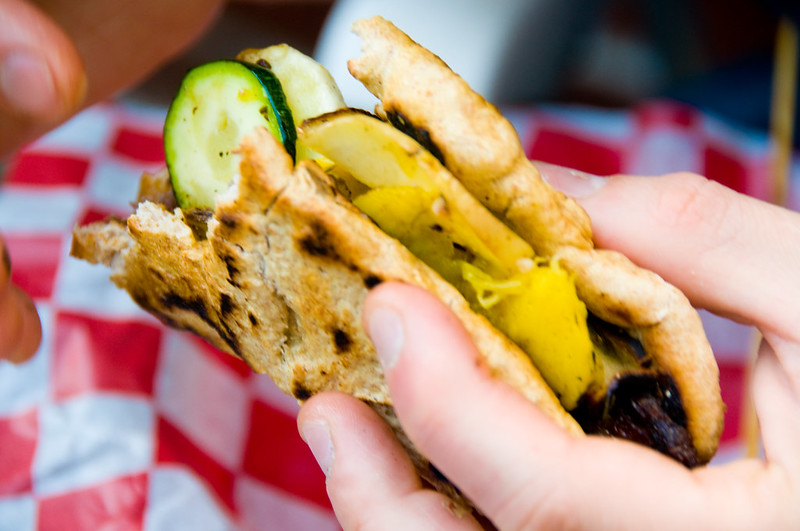 Peter hit the nail on the head this week too, bringing some homemade pita. Although his pita was just fine last year, he's been working on his recipe and churned out a ton of excellent bread to go with the kabob craziness. 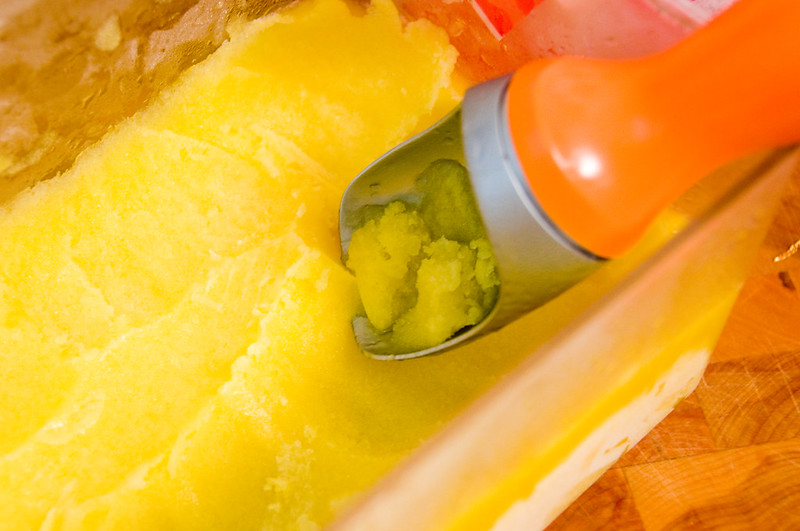 For dessert, I stuck with mangos, turning them into an sorbet. Until last Saturday, I had no idea that our food processor was not water tight. Upon returning to my food processor that I had left on to finely puree my mango mixture, It came as a huge surprise to me to find a large portion of the liquid spewed all over the counter and floor. This was a blessing in a disguise though, since it forced me to strain the mixture to ensure sure no chunks or fibers were left in, creating a superfine, ideal sorbet texture in the end. 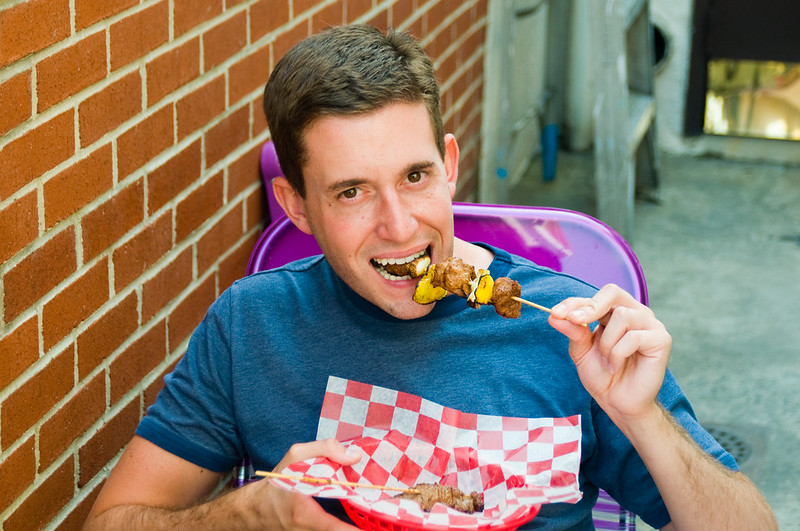 We had a very special Meatwave guest this past weekend, Kevin, who traveled all the way from Ohio just for some meat (or at least that's the story I'm going with). An old high school buddy of Miss Kris, Kevin has been told of the ways of the Meatwave, but due to his geographic challenges, never got a real taste of it. I don't think he was let down either, as he chomped down one kabob after another. 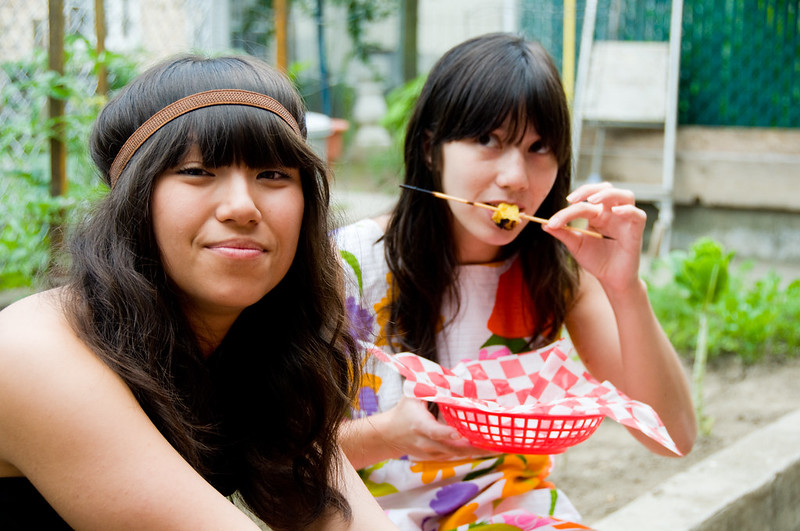 Marissa deserves accolades for best spreading the Meatwave gospel. She brought in tow another new Meatwaver, Charissa. Like with Kevin, that Meatwave did not disappoint, leaving Charissa singing the praises of the meat, and even more so for the mango sorbet. 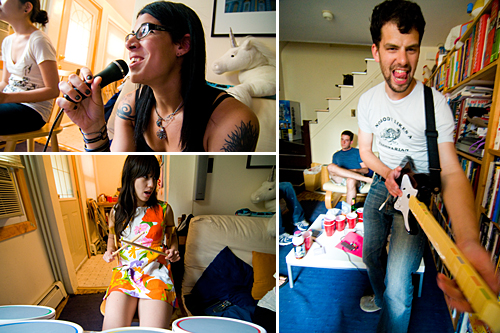 Although the Track Meat produced no definitive meat eating tunes, the theme was reincarnated by my latest Wii addition, Rock Band. When the rain started to hit, we moved the meat inside and started to sharpen our skills on the fake guitar and drums (this mic is all too real). The rockin' didn't let up until past sunset on the second longest day of the year. So even though I'm left without a master meat-eating-mix-tape, I ended the day with a satisfied stomach and some mad Rock Band skills.

P.S.: I still want to compile the ultimate Meatwave playlist, so if you have any suggestions, please leave them here!