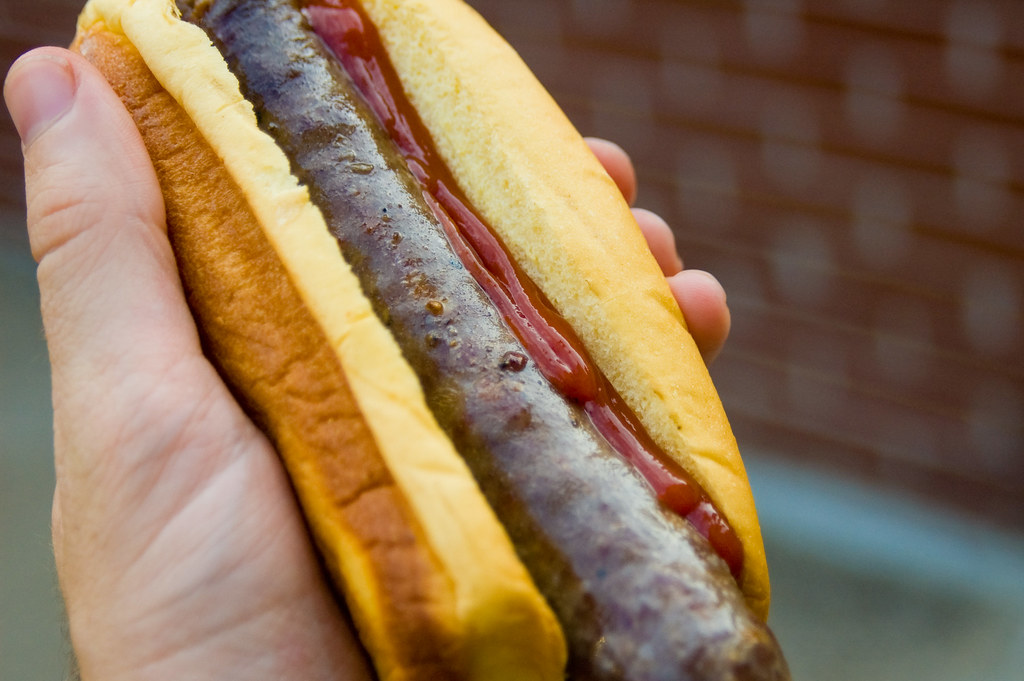 Somewhere between brilliance and a sausage wrapped in a chocolate chip pancake on a stick, lay my idea for a bacon cheeseburger sausage. When I first received my meat grinder, I was lost in thoughts about the great hamburgers and sausages I was destined to make with it. At some point those two thoughts melded into one, leading my brain to conceive the bacon cheeseburger sausage. As an American, I feel it was my patriotic duty to set forth and create this totally unnecessary food monstrosity, not so much because I should, but because I could. 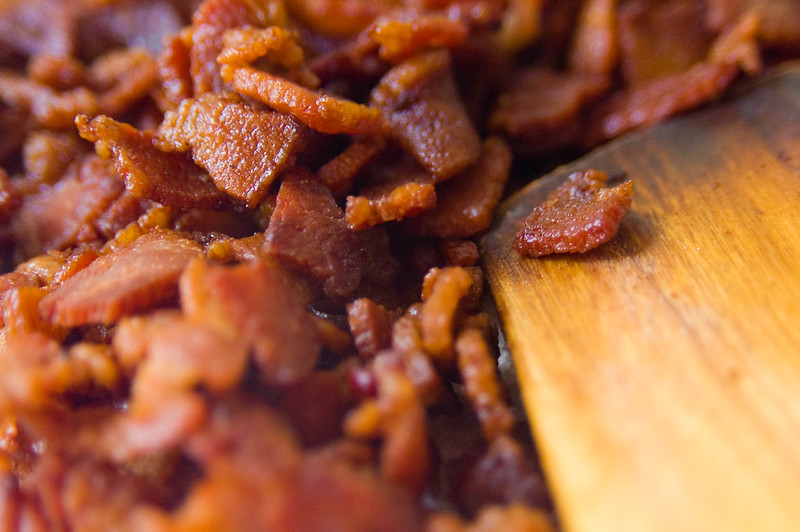 A bacon cheeseburger sausage seems simple enough, but there was a lot of think about in order to create the vision in my head. I started with the bacon. Bacon on a cheeseburgers works best for me when it's is nice and crispy, adding a crunchy texture, along with the bacon flavor, to the burger. Inevitability, no bacon would really hold up its crunch through through process of stuffing and grilling the sausage, but I figured I'd have the most likelihood of success by using a thick cut bacon, cooked until extremely crunchy. So I diced up 1/2 lb of bacon and fried it up just that way. 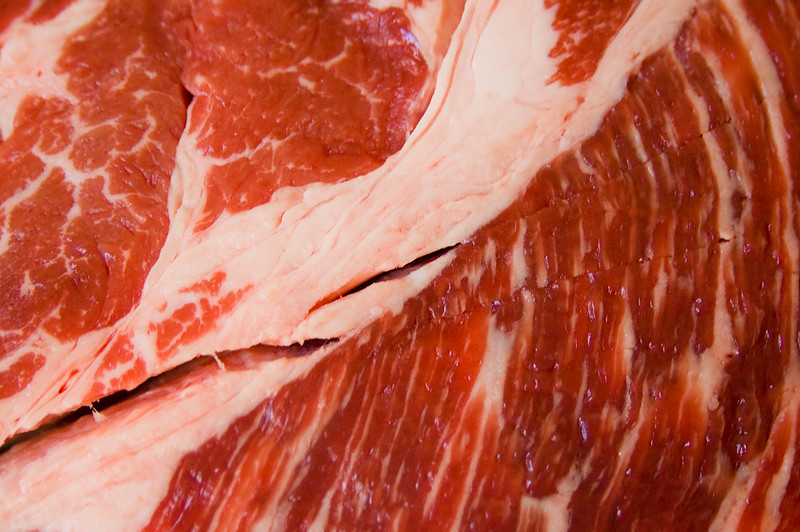 Next consideration was the beef. There was no doubt that this called for a chuck roast, but the question was if a chuck roast would provide enough fat for sausage. I toyed with the idea of cutting in fatback or bacon fat into the sausage, but I was afraid it would alter the flavor of the beef to slightly porky, leaving me a sausage that wouldn't taste enough like a true burger. Then I found this beautifully marbled and fatty piece of chuck. I would say this piece was about 25% fat, and that was good enough for me to avoid having to add any additional pork fat into the mix. 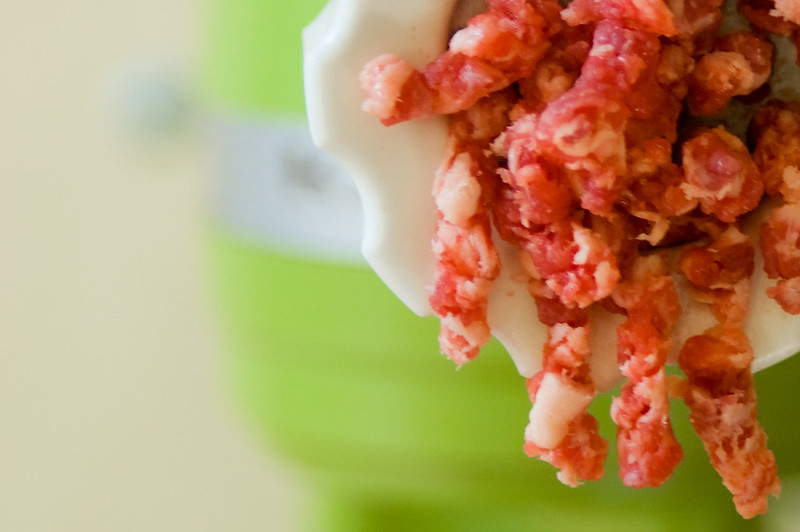 Grinding was the next step. I've found a two step approach to grinding the best for making burgers. I start by sending the cubes of meat through using the large grinding plate. Then once all the meat is ground, I switch to the small grinding plate and send the meat through again. This helps to both distribute the fat evenly and give the burger the perfect texture. I saw no reason why this method wouldn't work with the sausage, so I proceeded as I would have if I were making a regular ol' burger. 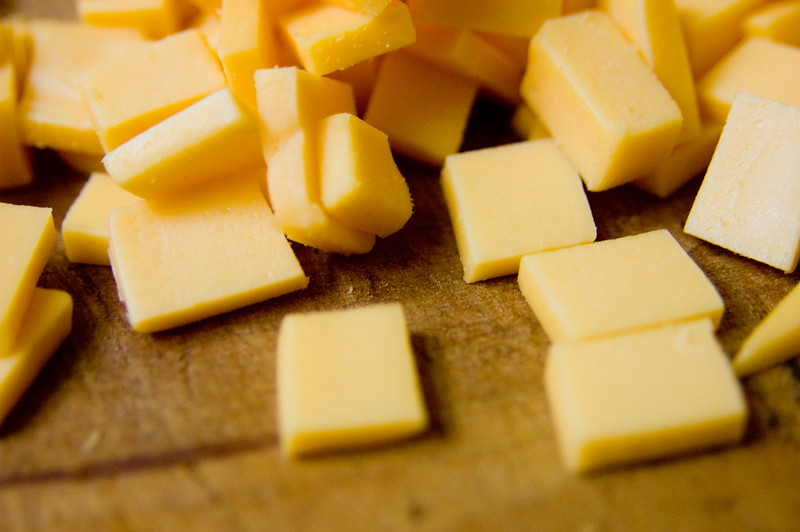 Cheese was a tough one. I was torn between using large chunks of cheese or a small dice. I guessed the former would give me pockets of gooey cheese as I ate my way through the sausage, and the later would give my sausage a creamy, cheesy taste throughout. I went with the small dice, cutting 4 slices of American cheese into 1/8" cubes. 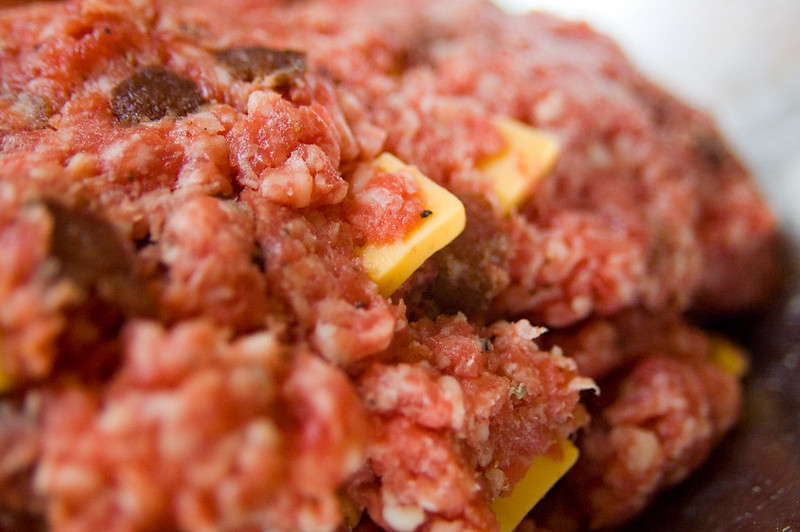 Then I mixed the bacon, cheese, and ground beef together. Seasoning was the question I was asking myself here. Sausage is reliant on seasoning to define it, but what flavors defines a burger? I would say beef foremost, and salt and pepper are all you need to bring out the beefy flavor. Smokey was the next thing to come to my head, since dripping fat causes the coals to flare up and smoke, imparting a faint smokiness to grilled burgers. I knew these flare ups would not result in added flavor to the beef inside the casings, so I flirted with the idea of adding cumin. In the end I decided against it though, using just a simple seasoning of salt and pepper like a regular burger. 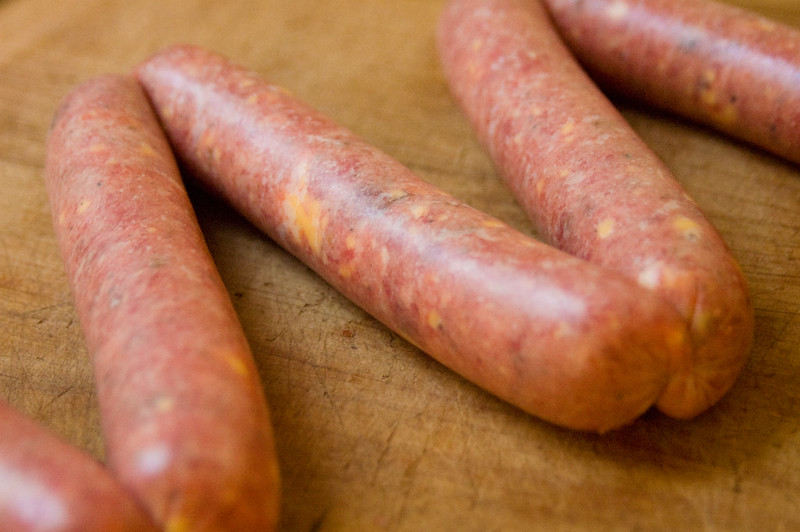 So I had my beef mixed and seasoned and it was time to stuff them into casings. This was actually tougher than normal. I think the slices of cheese and bacon bits clogged the stuffer a bit, required a lot of force to push the mixture through the grinder and into the casings. Although it took a little more time and energy, I got all of the meat into the casings and tied them off into 8" links. 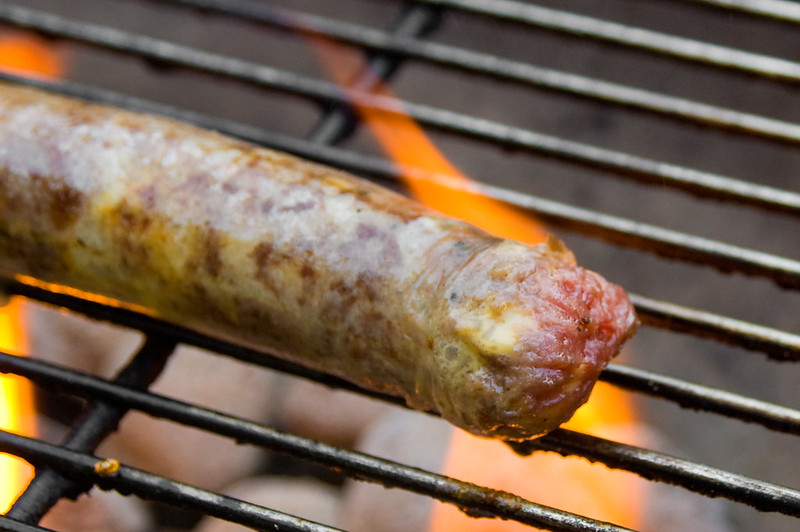 Now it was grilling time, and in it lay another question of bacon cheeseburger sausage making: To what doneness should I cook them? A perfect burger to me is medium-rare, and I only go above that if the burger joint is suspect or I'm forced to by house rules. Saying that, I cook my sausages all the way through, and eating a medium-rare sausage seems little odd. I decided I would try to go for something in between, shooting for a sausage cooked medium or medium-well. This attempt failed, mostly due to the extreme heat of my grill, causing a very short cooking time. I ended up cooking the thing well done, but it was still plenty juicy because my extra fatty piece of chuck. 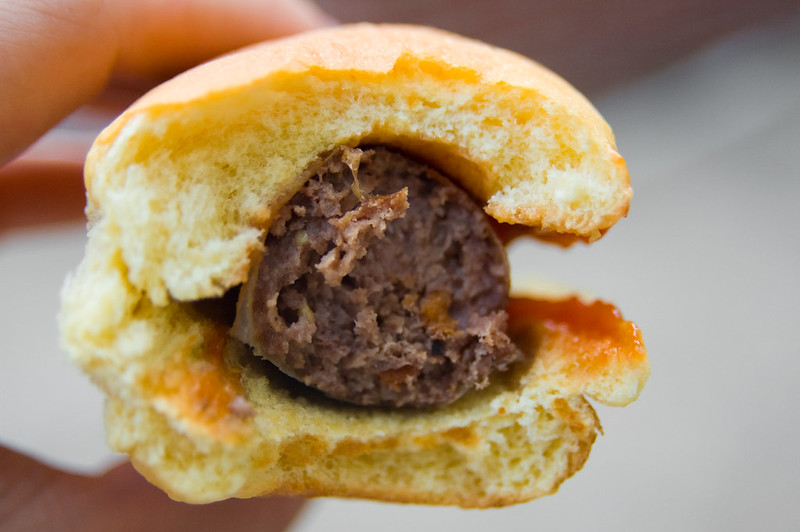 The moment of truth had arrived. Did I really stumble upon brilliant creation or was this another useless invention that should have never left my brain? As I said in the beginning, I felt the idea was somewhere between the two, and the end result was the same. It did taste as if I was eating a bacon cheeseburger sausage. Actually more like a bacon burger, since the small dices of cheese did not hold up through the cooking process and I could not taste their presence.

I have to say that the whole thing left me a little hungry for a real burger. So why even bother with the bacon cheeseburger sausage? It's not so much about trying to make a great tasting burger in sausage form, but more acting on a ridiculous impulse, and that's the whole fun of it, and a lot of the fun in cooking. Besides, if someone is getting rich on those sausage pancake sticks, someone else stands to make millions on bacon cheeseburger sausage. 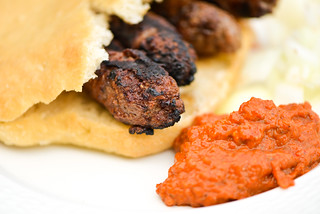