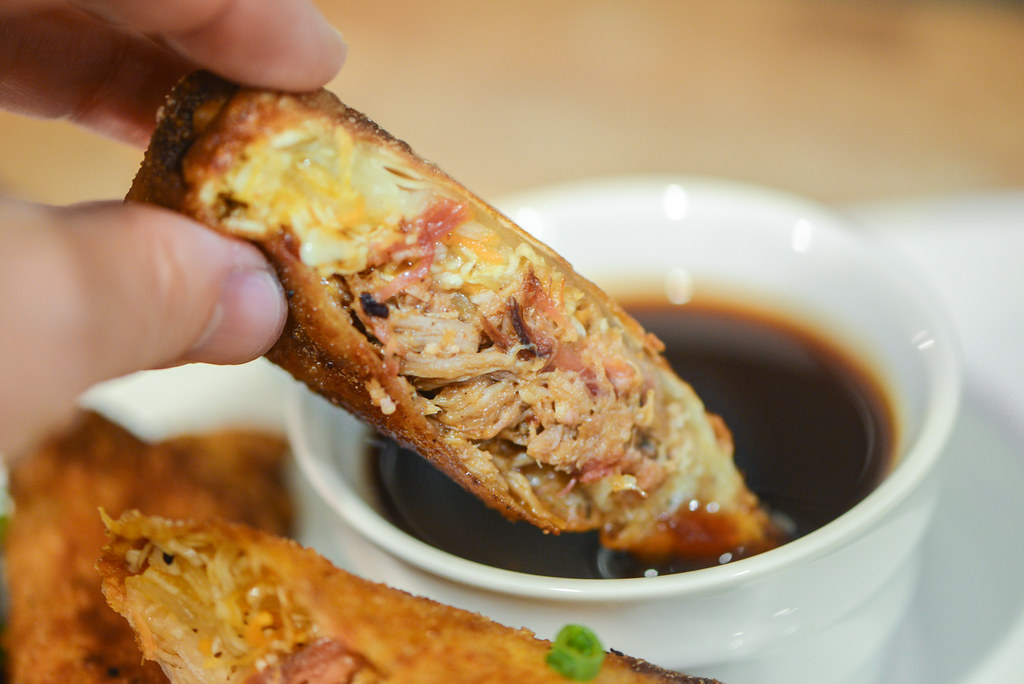 Sadly, wing month is over, but before we return to our regularly scheduled program, I've got one more game-day themed recipe for all you Meatwavers—pull pork egg rolls! These actually come off a growing list of ideas to make use of a fairly consistent supply of pulled pork in my freezer. So hopefully this will start a new recipe trend for me of transforming meats I have stored in suspended animation into new and incredibly tasty things, and if these egg rolls are going to serve as an example, we're in for a streak of real winners. 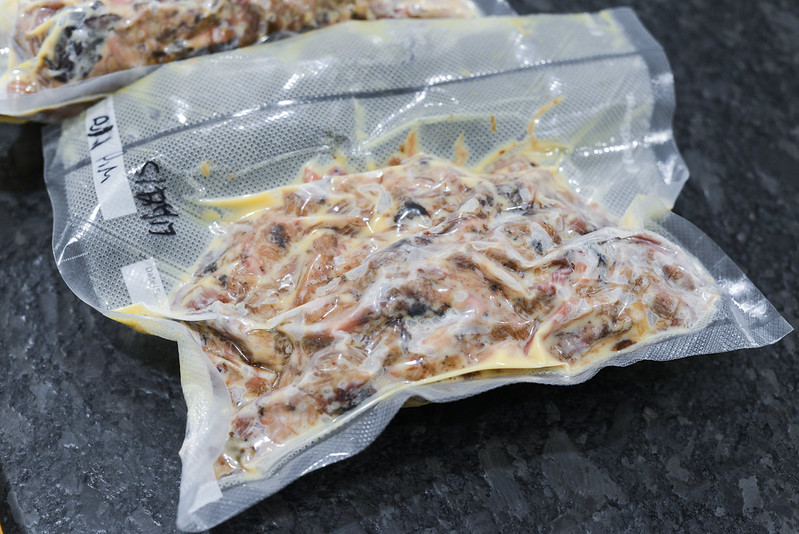 For most of my cookouts, a single pork butt suffices to feed the crowd, but to both ensure we don't run out of food and to make use of a smoker that's already running, I almost always smoke at least two butts. Even after sending folks home with leftovers, I usually have enough meat remaining to stuff a few vacuum sealed bags full, which I can then pull out whenever I have a hankering for smoked pork. The only problem is I collect pork faster than I eat it, and I now have more on hand than I know what to do with. So these eggs rolls seemed like a good solution for freeing the freezer of some space. 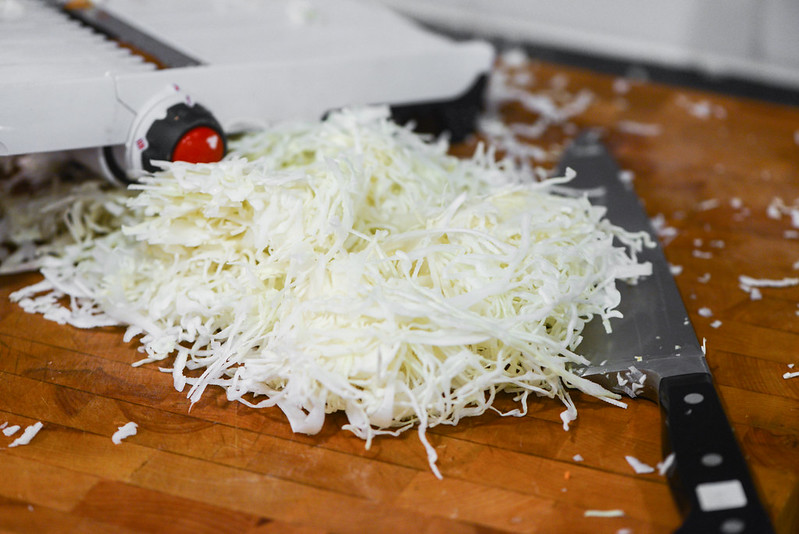 Pork alone seemed like it would make for a lacking egg roll experience, so I decided to put together a slaw to use for the stuffing as well. A mayo-laden coleslaw being deep fried didn't have a very appetizing feel to me, so I opted to make my vinegar slaw, which is a recipe I've done my times to much acclaim. 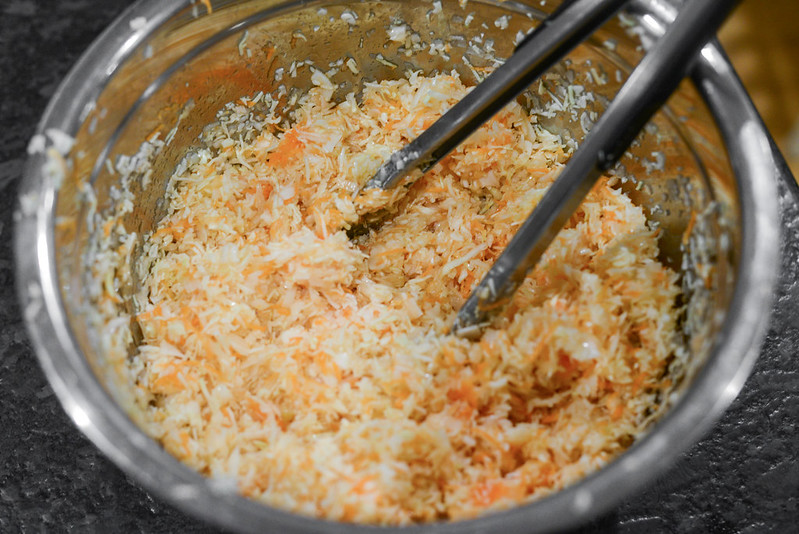 After finely shredding cabbage, carrot, and onion, I combined the veggies with salt and sugar to extrude moisture and leave the slaw mix perfectly crisp-tender and well seasoned. Then I added in the dressing, which was an equal mix of cider vinegar and sugar with garlic, pepper, and celery seed for the minimal, yet effective, seasoning. 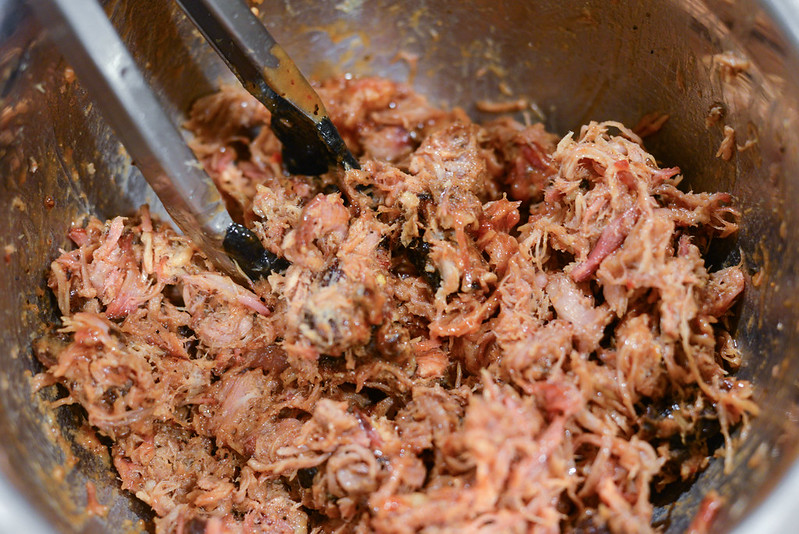 For the pork portion of the stuffing, I emptied my couple bags of now-defrosted smoked meat into a large bowl and added in barbecue sauce to taste. I used a Lexington style sauce, which adds ketchup to a primarily vinegar base, giving the pork a physically light looking coating, but one that was jammed with tangy and slightly sweet flavor. 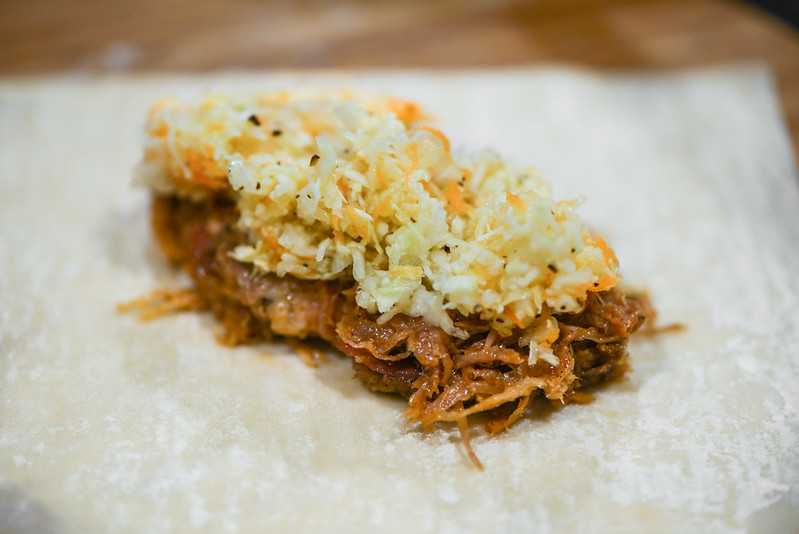 I had never made egg rolls before, so the first few were a bit tricky for me to put together and I had some issues with ripping the delicate wrappers, but got the hang of it about three rolls in. To start off an egg roll, I topped one of my store-bought wrappers with about a quarter of a cup of pork followed by a few tablespoons of slaw. 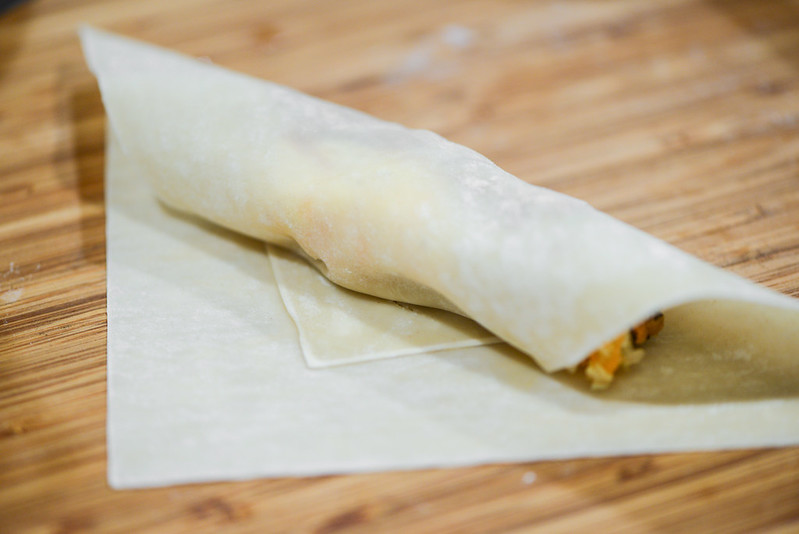 I then folded the top of the wrapper over the filling and tucked the edge under, pushing on the stuffing to pack it in fairly tightly. 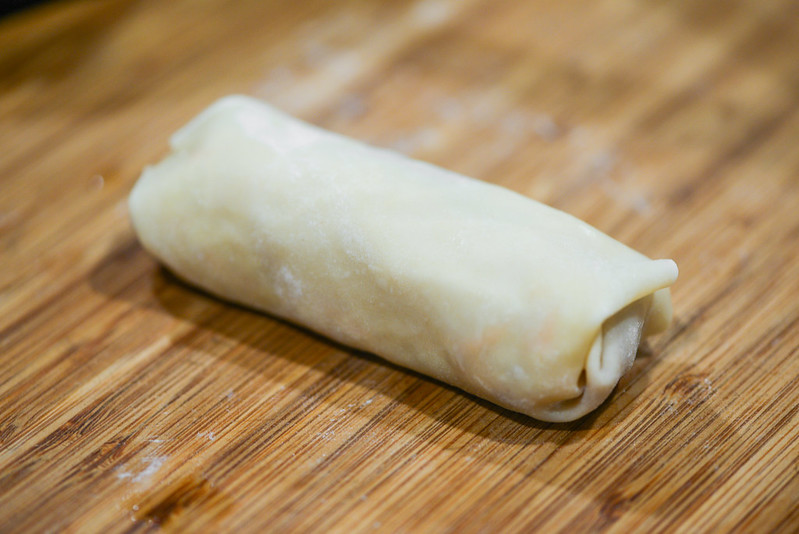 Then I brushed the exposed edges of the wrapper with water, folded over each of the sides, and rolled closed. These felt pretty securely shut, but when I transferred them to a baking tray for holding, I placed them seam side down to make sure they didn't unravel. 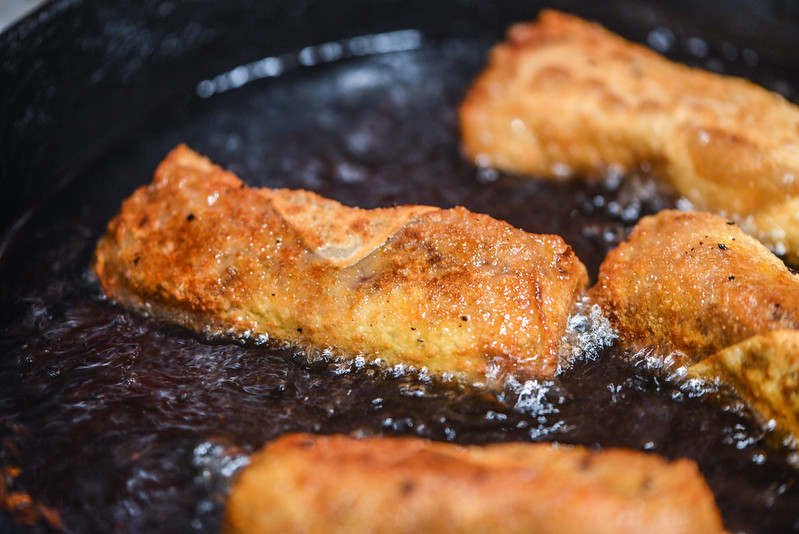 I thought I had the hard part done now, but I totally burnt the first few egg rolls I attempted to fry. My folly was heating the oil too hot—I went with a standard 375°F that I usually like to fry most things at, but this hot temperature cooked the eggs rolls way too quickly, rendering them dark brown or blackened before the filling was throughly warmed through. I then lowered the oil temp to 325°F and that seemed to be the sweet spot, with the rolls coming out beautifully golden brown and hot throughout in just a couple minutes per side. 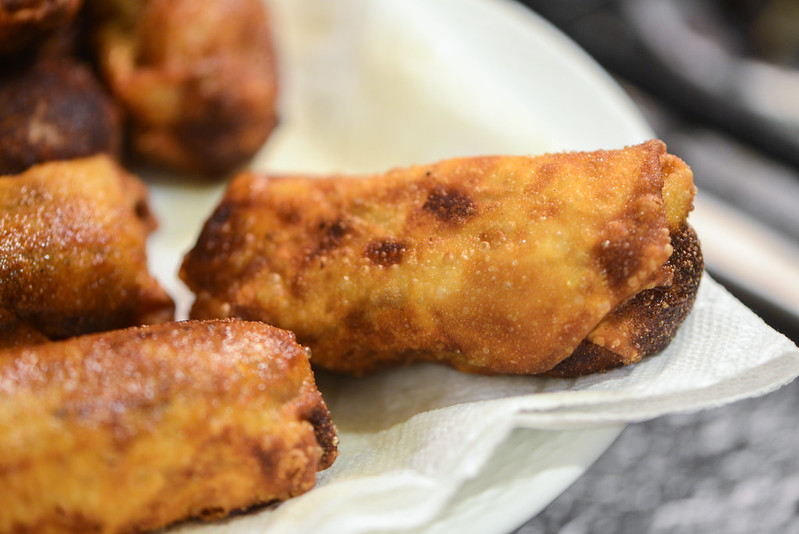 As the egg rolls finished—I worked in batches of three or four at a time—I transferred them to a paper towel lined tray to help wick away some of the excess oil. Once I had enough ready for my guests, I loaded them on a tray and served them right away with extra barbecue sauce for dipping. 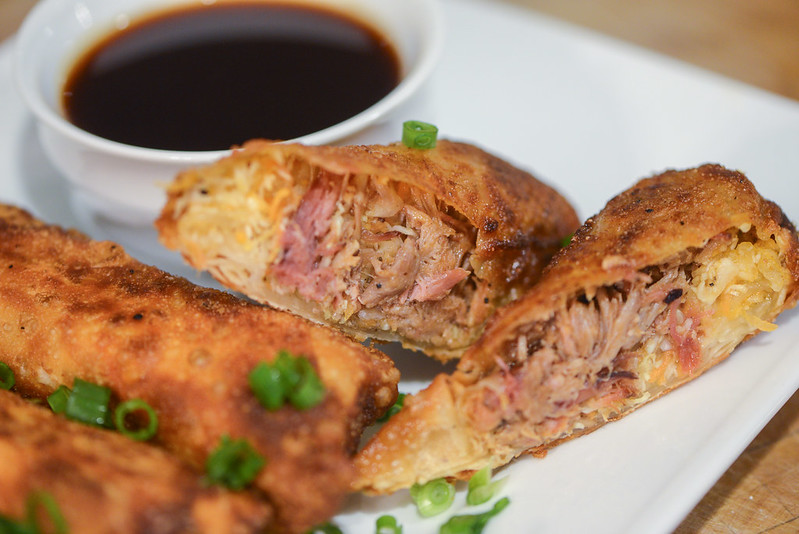 I assumed this would be a pretty decent use of leftover pulled pork, but the finished egg rolls blew me away. In theory, they aren't much different than a barbecue sandwich—it's meat, slaw, and bread—but boy does that crispy shell make a world of difference. The delicate crunch of the wrapper adds a textural component that was amazing with the smoky meat which found new life in this form, and that got an extra boost from the freshly made, tangy slaw. They were great on their own, but a little extra dip in barbecue sauce added even more to the party. My only issue with these was that I made so many that I ended up freezing the leftovers, which now currently take up more room than the pork I originally took out. It doesn't really matter though, because I'm way more apt to pull these egg rolls out at anytime than the pork alone.