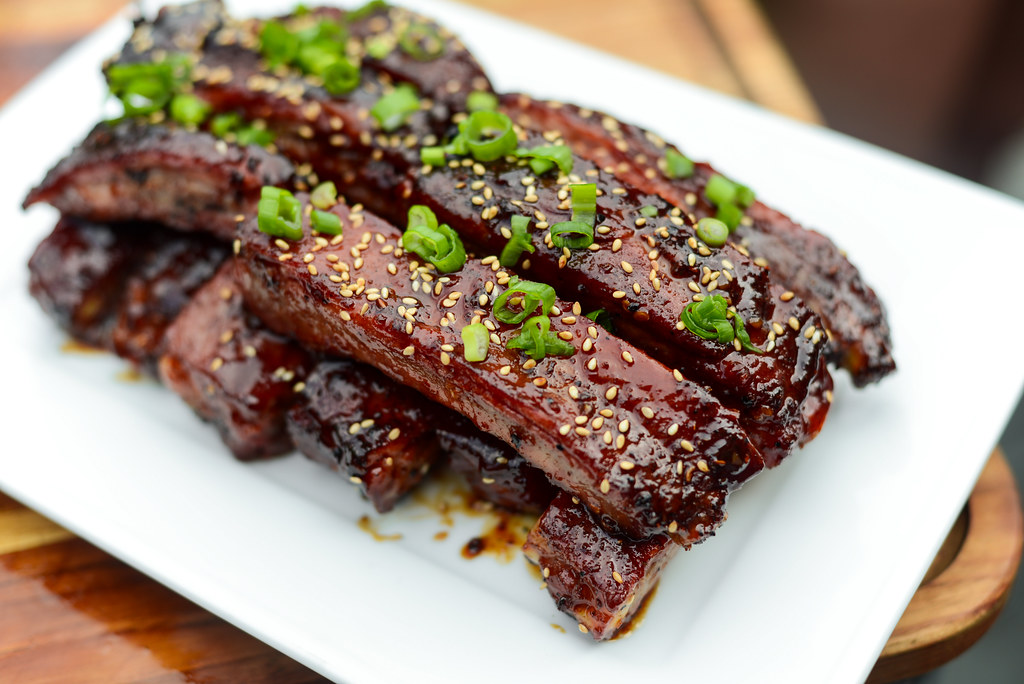 When it comes to barbecuing, ribs are by far my go-to item. This certainly shows with ribs racking up sixteen unique recipes so far, while other common slow smoked items like pork butts or briskets only have a couple each. This has certainly bred a consistancy in my rib production, but at the same time, also a monotony. In thinking of ways to continue to build pork rib excellence and break repetition at the same time, I though why not try something completely new—smoke, and then fry my ribs. Turns out that was a pretty sweet idea, and these sweet and sticky hoisin-glazed ribs are just one of two prime examples so far. 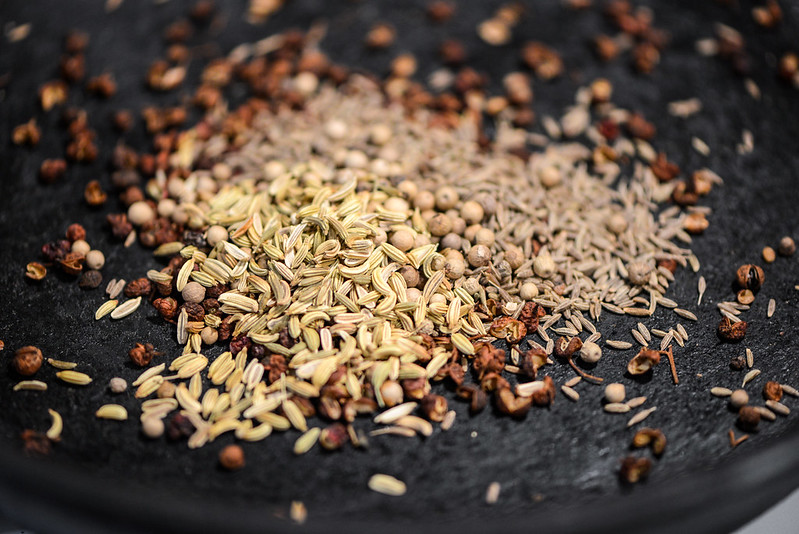 In coming up with this recipe, I not only wanted to challenge method, but also flavor. This led me to breaking with norms I've developed for my barbecue rubs and start the introduction of flavors I hadn't commonly used previously. To start this off, I toasted Sichuan peppercorns, whole cumin, white peppercorns, and fennel in a cast iron skillet until fragrant. 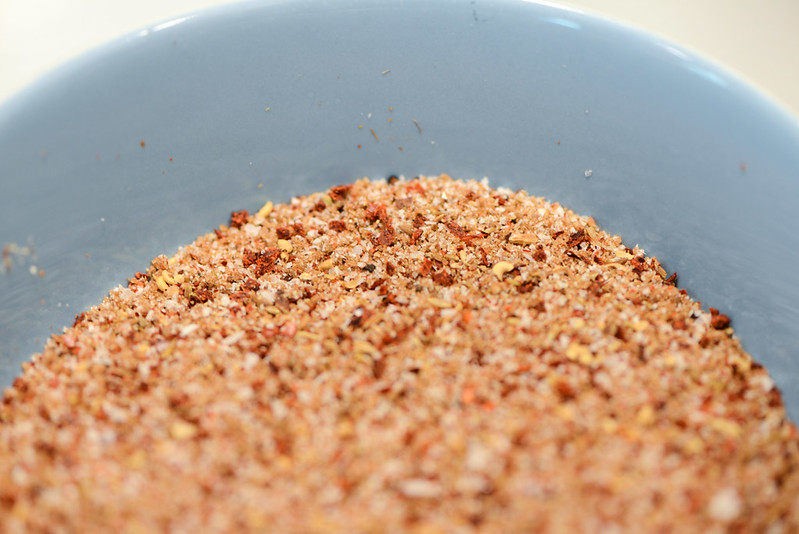 Then I pulsed them in a spice grinder, transferred the spices to a small bowl, and continued to build up the flavor profile with the additions of brown sugar, salt, granulated garlic, and ground mustard. This created a rub that had definite barbecue pinnings, but the Sichuan and white peppercorns gave it a unique heat while the fennel lent its own distinct flavor that I usually would never think of putting into a rub (partly because fennel just isn't my thing). 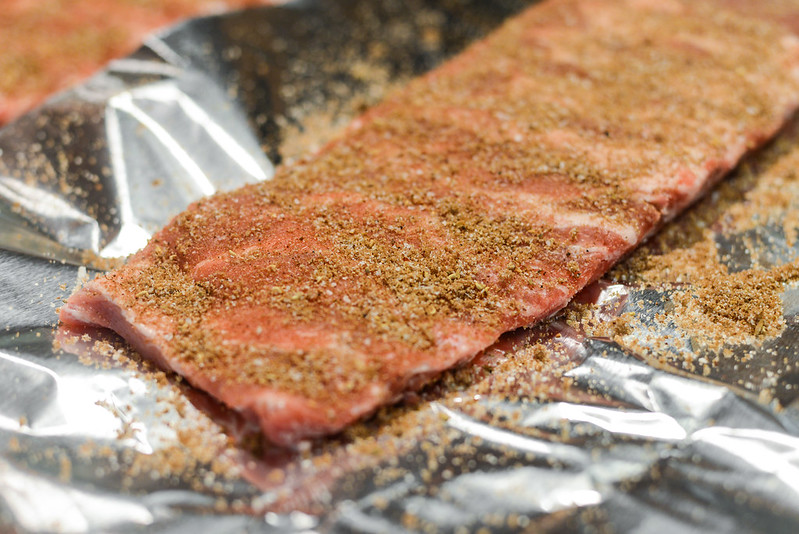 Once the rub was done, I coated a couple racks of St. Louis cut spares in it. Then I wrapped those up and placed them in the fridge while I worked on the sauce. A rest in the fridge is totally optional—I usually do it because I prep things in advance, but rubbing the ribs down and throwing them straight in the smoker hasn't produced significantly different results in my experience. 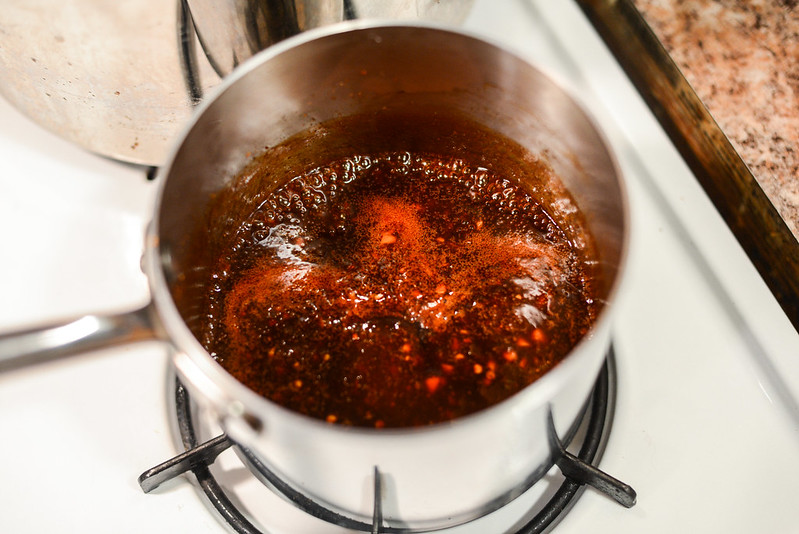 Then it was on the the glaze. There were two things I knew I wanted out of this sauce—I wanted it to be sweet to balance out some of the spice in the rub, and I wanted it to be thick since I would not be saucing the ribs in the pit and allowing the sauce to cook down like normal. Continuing with the Chinese flavors, I used hoisin as the base, upping that sweetness more by way of honey and ketchup, then adding complexity and savoriness from soy sauce, vinegar, sherry, garlic, ginger, fish sauce, and red pepper flakes. I let the sauce boil down until it was thickened to a point I felt it would coat the ribs nicely. 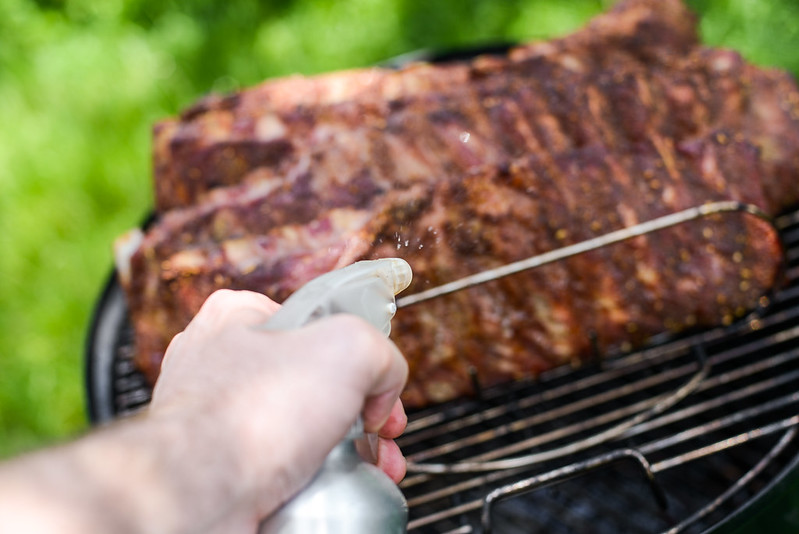 Next the ribs went into the smoker running at 225°F with a couple chunks of pecan thrown on the coals. I let the ribs cook undisturbed for a couple hours until they turned a beautiful deep mahogany color. In order to preserve this color, I started spraying the ribs with apple juice at this point about every 45 minutes—this step is mainly about ensuring the ribs don't darken too much before they're done cooking. 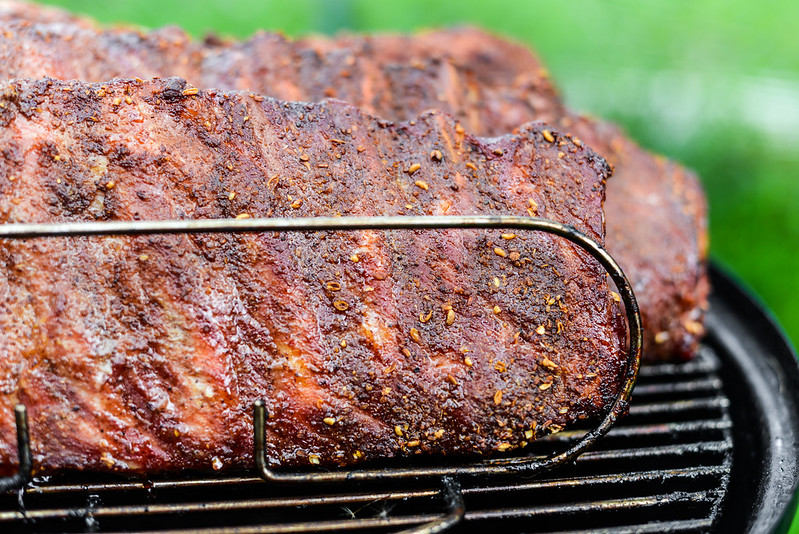 I actually didn't want to fully cook the ribs, thinking they would finish up quickly in the hot oil. I usually test doneness by lifting one end of the ribs, and if they have a sufficient bend to them without falling apart, they're perfect. So this time around I was looking for a slighter bend than I'm used to, which led me to pull them off the pit after four hours, about an hour shy of my usual cooking time. 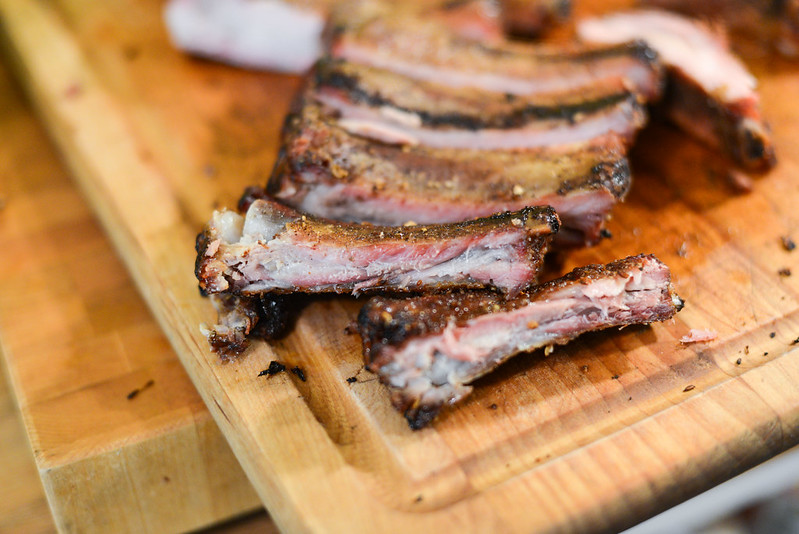 Since I had cooked these before any guests arrived, they got a good 30 minute rest before I sliced them in preparation for frying and serving. 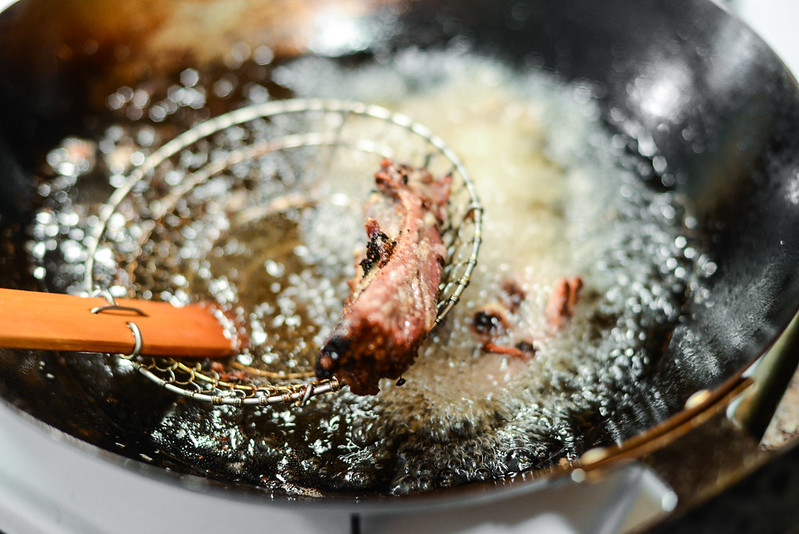 It was right before I wanted them ready for my guests that I heated up a wok with a couple inches of canola oil to 350°F and started frying these off. Since I had never fried ribs before, I was cautious and attentive to what was happening and when the right time was to pull them out of the oil—I did need them to cook a little more, but didn't want them to dry out. I also wanted to add some crispness to them that a normal smoked rib doesn't have, and this seemed to happen after only a couple minutes in the hot oil. 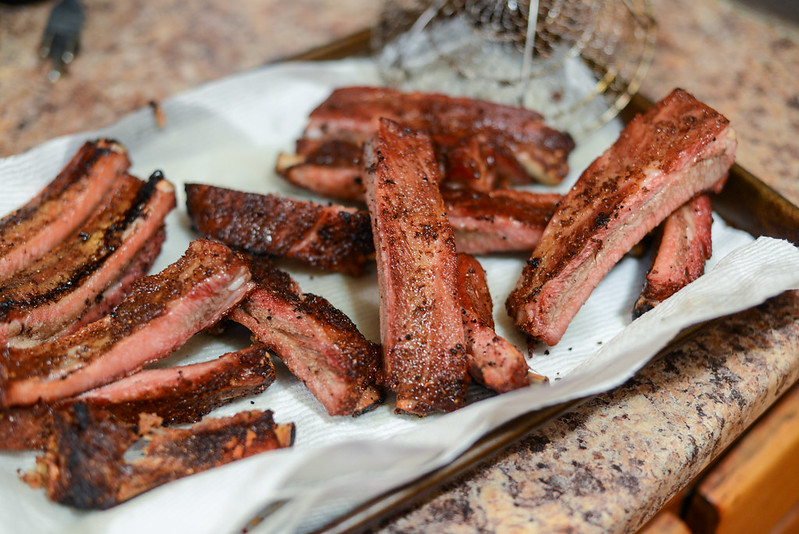 It's hard to tell in the photo here, but the edges of the ribs got a little darkened and had a slight crisp to them, along with the heavily rubbed top portion of the rib. Letting them drain on a paper towel helped wick away a lot of the oil, so they weren't greasy in the end. 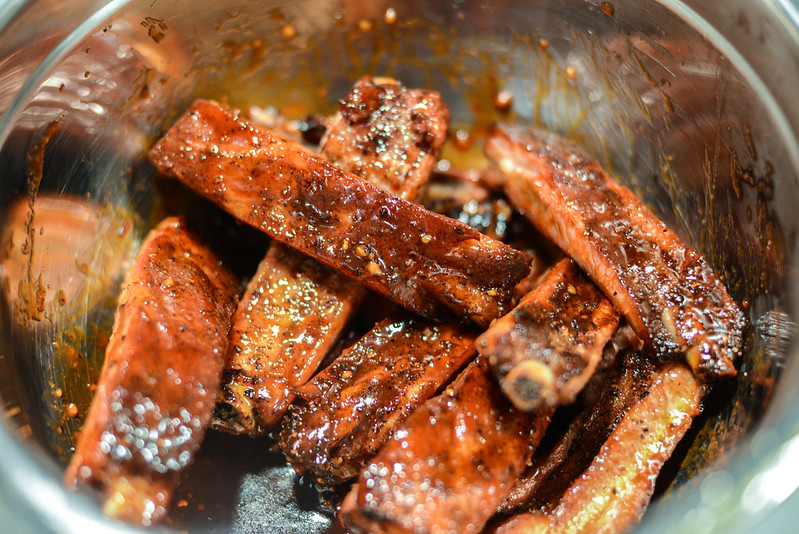 After resting a couple minutes, I worked in batches saucing the ribs in a large bowl by tossing them with the glaze as I would with chicken wings. Then I plated them and finished them with a garnish of sesame seeds and scallions. 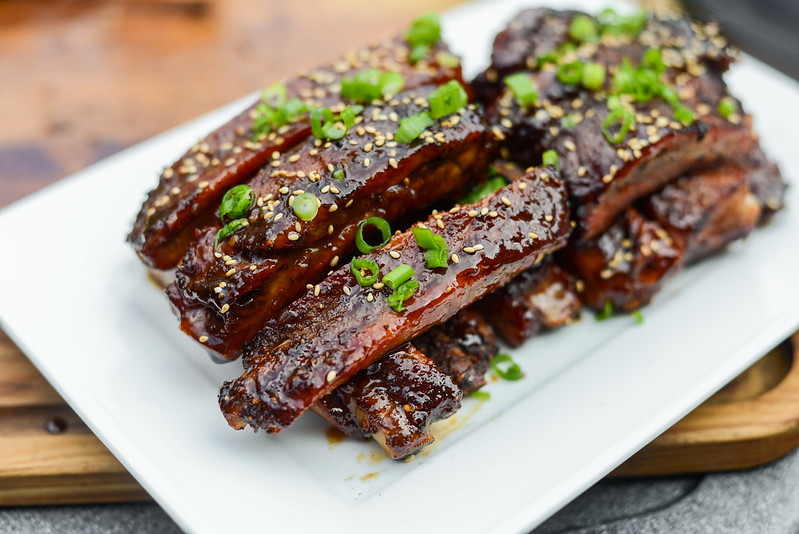 And finally I had these, a real sight for sore eyes. Having done a lot of smoked ribs, to me these looked like something different and special, and they were. They had the smoky flavor and tender meat you'd expect, but there was a tighter, crisper exterior texture that made them stand apart. The sauce and rub also did a lot in putting these ribs in class of their own—the two peppers and fennel provided that distinctly Chinese flavor which was both enhanced and balanced by the sweet hoisin glaze. If you're anything like me and have a need to break from the same-old same-old, try giving your ribs a quick fry, I think you'll be pleasantly surprised and delighted by the results.