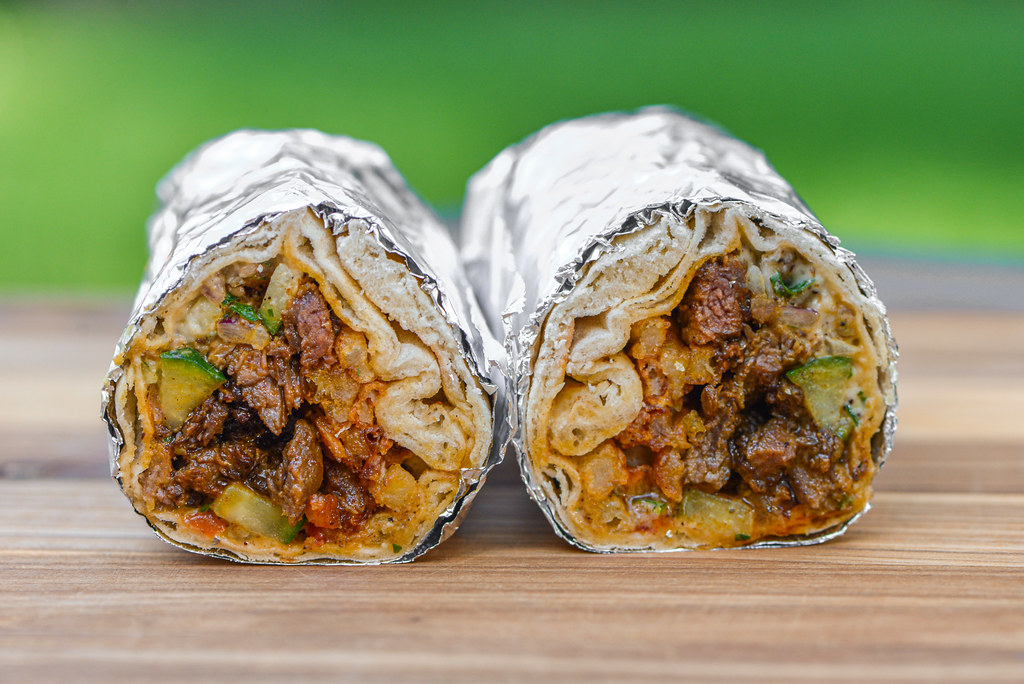 I've been on a shawarma quest pretty much since I started doing recipe development. That's because this dish, which is ubiquitous throughout a lot of the Middle East, served as my primary form of sustenance when I studied abroad in Tel Aviv and became so ingrained as part of my diet that I have a need to keep in consistently represented. When I lived in New York, I was able to get shawarma that was on par with what I had in Israel, but that hasn't been the case in North Carolina, so efforts to improve my recipe and method have taken off since my resettlement almost seven years ago now. In that time, I found a seasoning mixture that worked wonders on chicken thighs, and more recently I tried a cooking method to simulate the also vertical rotisserie-cooked pork gyro that worked out well, so I decided to combine those two to up my beef shawarma game. 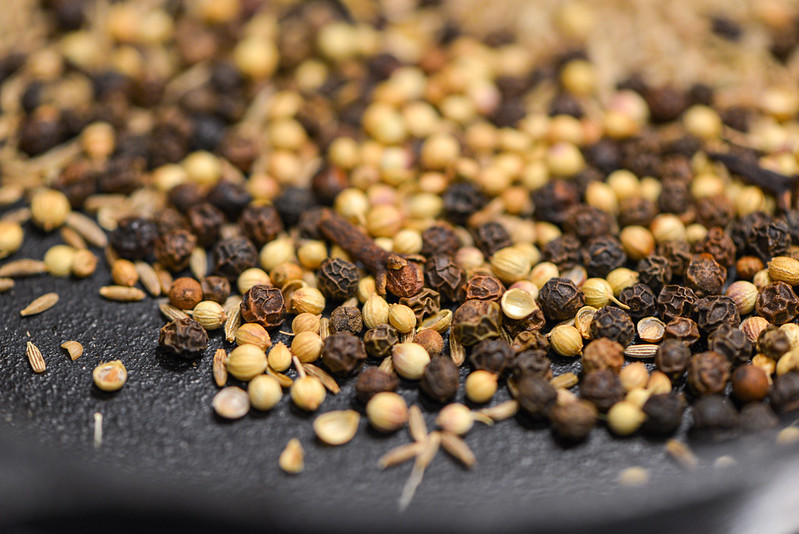 While I was happy with my seasoning mixture for shawarma, it was developed for chicken and I thought some modifications were called for when switching to beef. Mainly ingredients I had previously considered, but ended up omitting, felt like they may be more ripe to provide deeper flavor here. Those were things like cloves, cinnamon, and nutmeg, which I sometimes find overpowering with meats that have a lighter touch. I also decided to start with whole spices where I could, toasting and then grinding them for a more intense, and fresher, flavor. 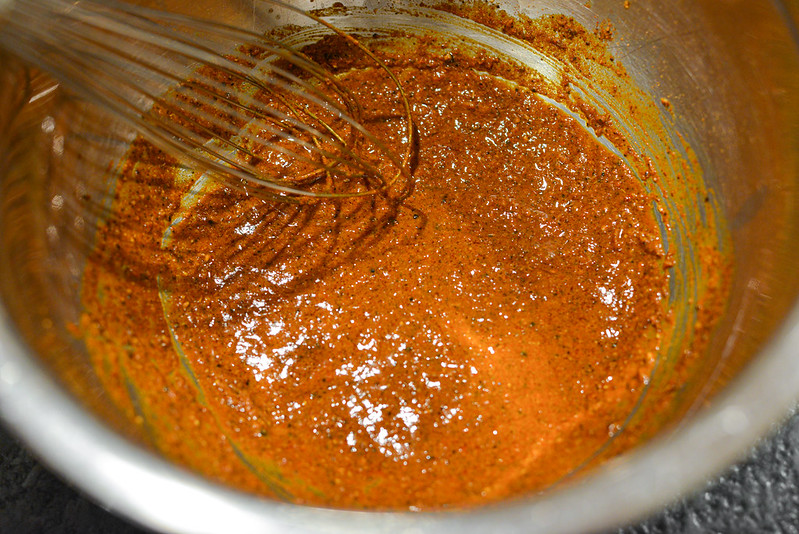 Beyond the spices, lemon is a must, and I upped that here by also including lemon zest along with the juice. I also backed off the amount of oil because a lot of the purpose of that was to coax flare-ups, giving the quick cooking chicken the ideal crispness and char on the outside, but the method I used this time didn't call for that. 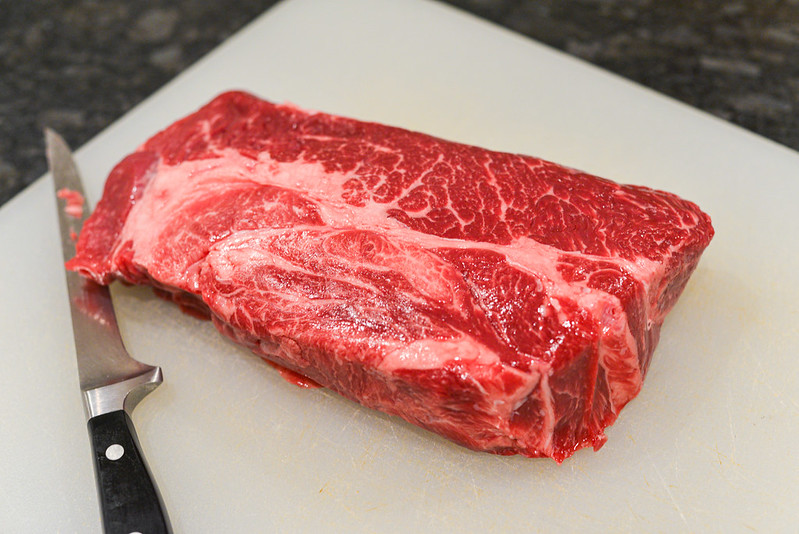 Instead of a high heat, fast grilling scenario, I was planning on doing a low-and-slow method which meant I could also use a pretty fatty piece of beef effectively. This led me to choose beef chuck since it's rich in both intra- and intermuscular fat that would slowly render during the cook and provide a ton of flavor. To prep the beef, I cut it into thin strips and discarded and excessively large or hard pieces of fat, but still kept most of the fat intact. 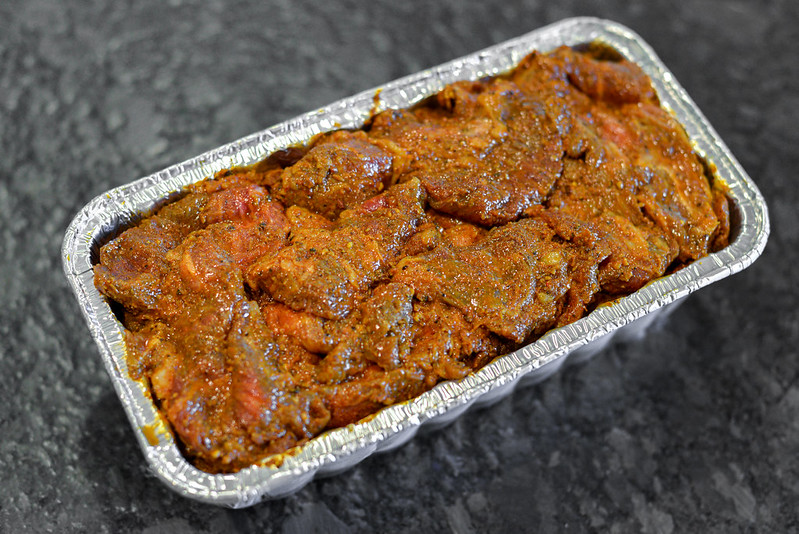 After tossing the beef in the seasoning, I layered it into a small loaf pan and set that in the fridge overnight. The thin strips and layering is meant to mimic how the beef is stacked onto a vertical rotisserie. I do have a standard rotisserie and I've yet to try making shawarma utilizing it, but there are many problems presented when going from vertical to horizontal that would be hard, but not impossible, to overcome. Another reason I haven't used the rotisserie is that I would need to make significantly more meat, ant that would require me to find quite the crowd to help consume it. 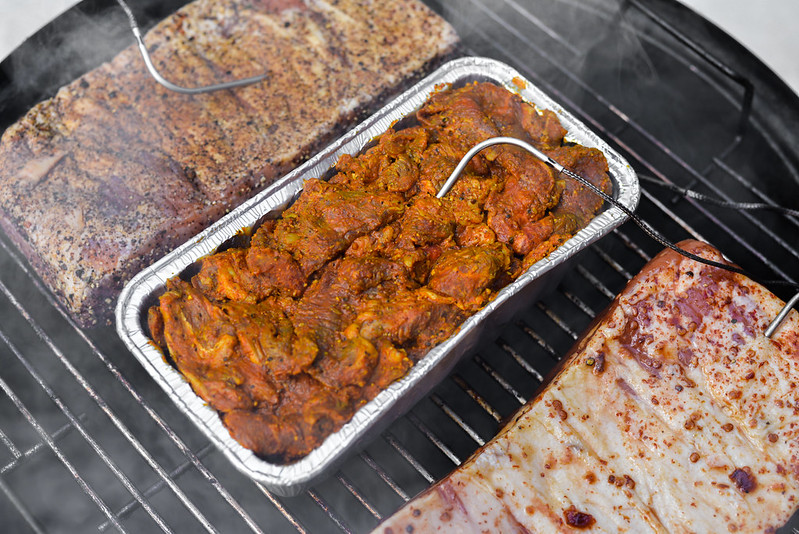 The next morning I placed the entire loaf pan in the smoker running at 255°F. You can see two different bacons on either side of the pan that I cooked at the same time, and those required smoke, so I did have a chunk of applewood tossed on the coals, but it's not needed here since smoking isn't not traditional for shawarma. I think due to the meat being in the pan and the applewood having a delicate touch, the smoke was not even decreeable in the end anyway. 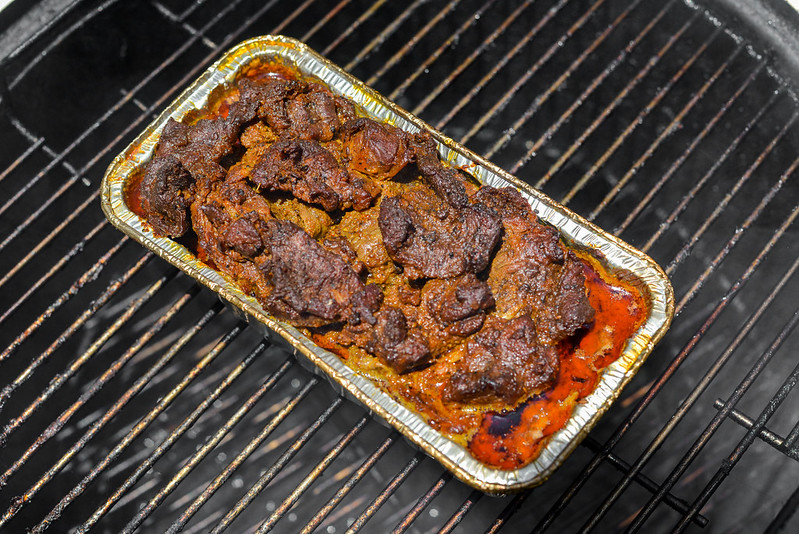 I let the meat cook to a standard temperature I've found ideal for fatty beef—196°F. Since the beef cooks in its own rendering fat, this takes much less time than standard barbecue and clocked in at just under four hours. At that time I took the loaf pan out and let it sit until cooled to around room temperature. At this point you can move on to slicing and finishing the meat, but the flavor and texture will be improved by letting it chill completely, so I transferred the loaf pan to the fridge and let it sit there until dinnertime. 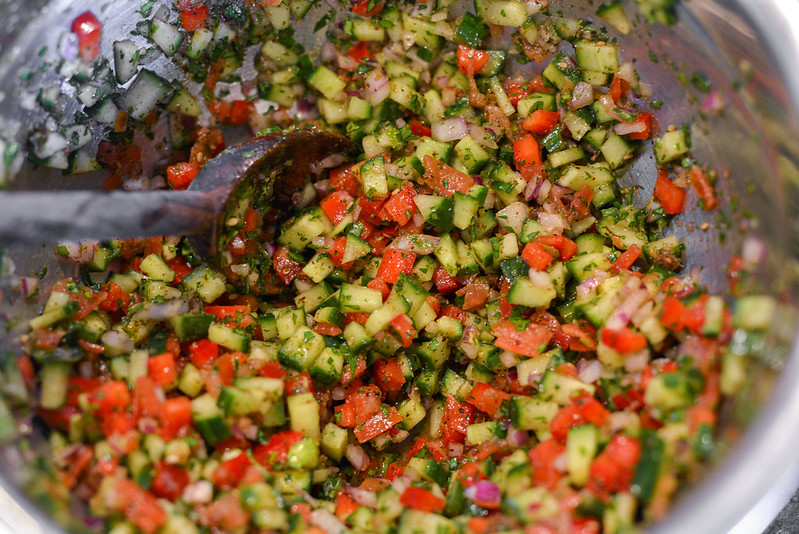 During this cooling downtime, I prepped the additional sandwich fillers. When ordering shawarma at a store, you're usually presenting with a whole host of vegetables to pick and choose from, but at home I tend to fall back to making an Israeli salad since it delivers four vegetables at once—cucumber, tomato, red pepper, and red onion—along with some other complimentary seasonings too like za'atar and lemon. 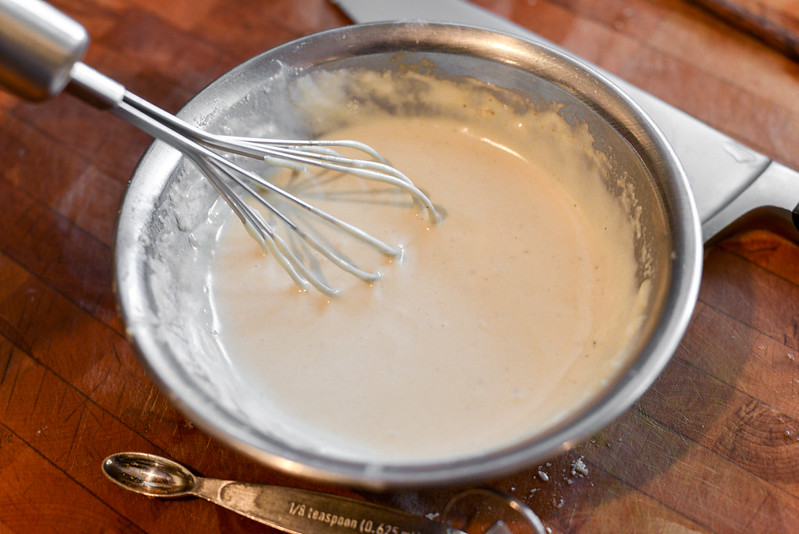 Tahini sauce is must to add that toasty and nutty flavor, so I whipped up a batch of that which required whisking the base tahini with lemon juice, garlic, and water. When seasoning with salt, I also decided to add a pinch of cumin too since it tasted like a little earthiness would help round out the flavor. 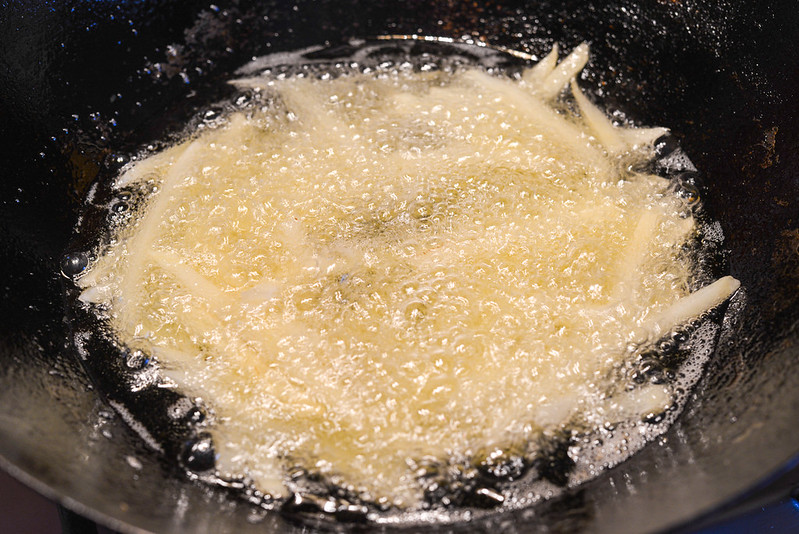 The final thing was french fries, and to me, this is one of the most crucial mix-ins that's the least common to see in the United States. There's so much flavor going on in a shawarma sandwich that the fries really help temper that and also add a good textural boost from the soft innards of the fries adding a type of creaminess to the party. 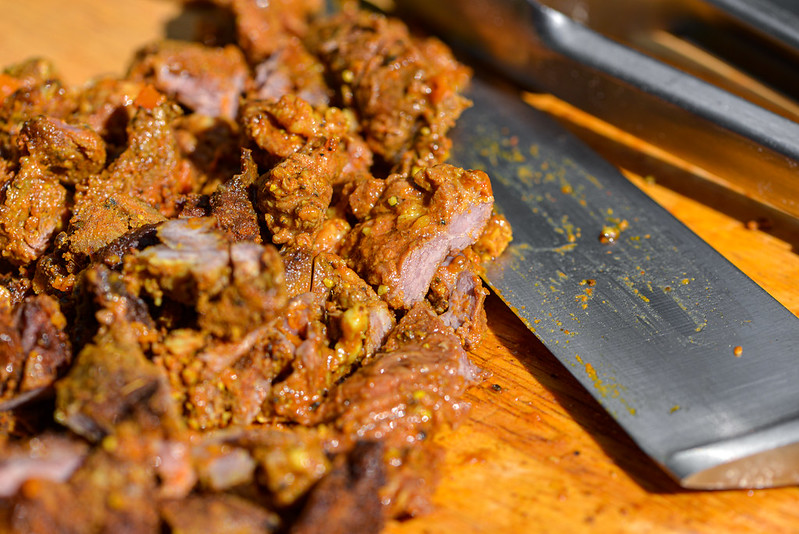 When I made pork gyro utilizing this same cooking method, the meat fused together and became a cohesive loaf. That did not happen here, but it was of little consequence because the next step was to slice the beef into thin strips I was going to put on the grill. This part of the process was even more crucial for the shawarma because the interior meat really didn't brown at all, while the meat was a bit more evenly browned throughout with the gyros probably due to less seasoning/marinade. 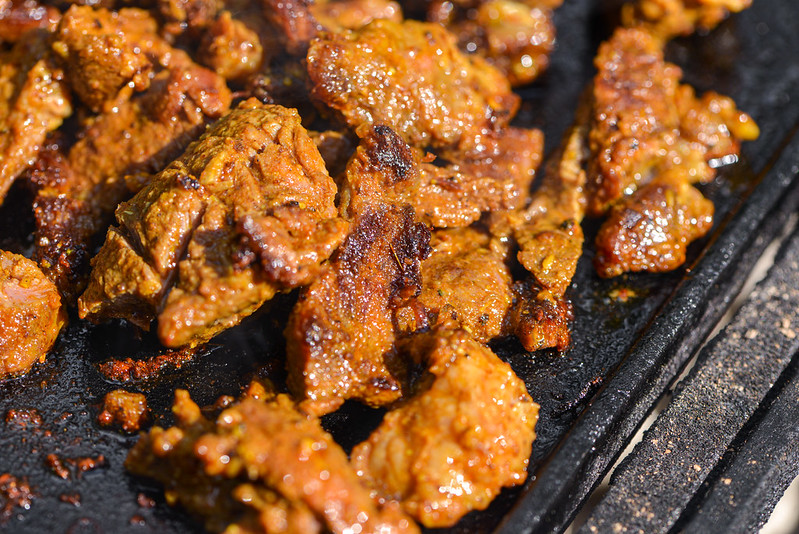 High heat is called for to finish up the beef because this is the part of the method that tries to replicate those outer pieces of meat on the spit that get deeply browned and flavorful. My cast iron grates came with a griddle panel that I used here to prevent the beef from falling through the grates, but I could have either managed without it, or did this step using a cast iron skillet on the stove instead, which I did do when making leftovers a couple nights later. 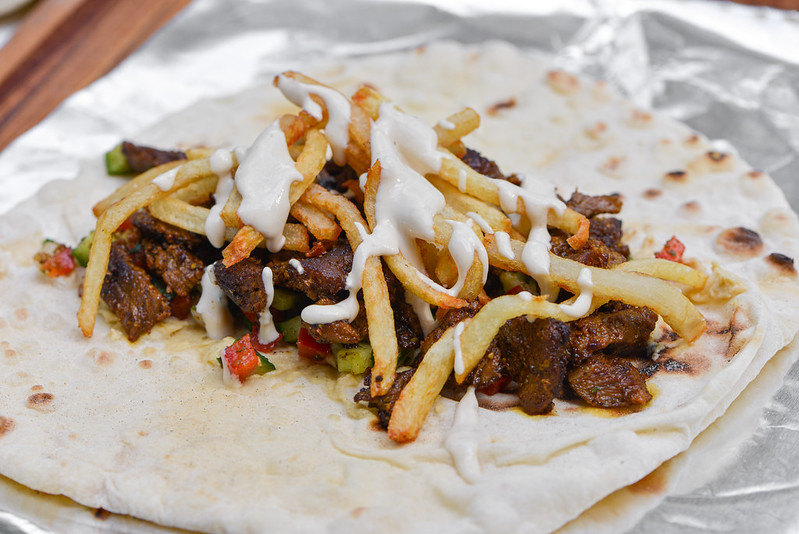 Once the beef was well browned in spots, I began with the sandwich assembly which started by warming a piece of laffa bread on the grill. I then spread on a layer of hummus and topped that with the Israeli salad. Next went on a generous helping of the shawarma followed by fries and the tahini sauce. I then rolled the laffa closed and secured the entire thing shut by wrapping it in aluminum foil. 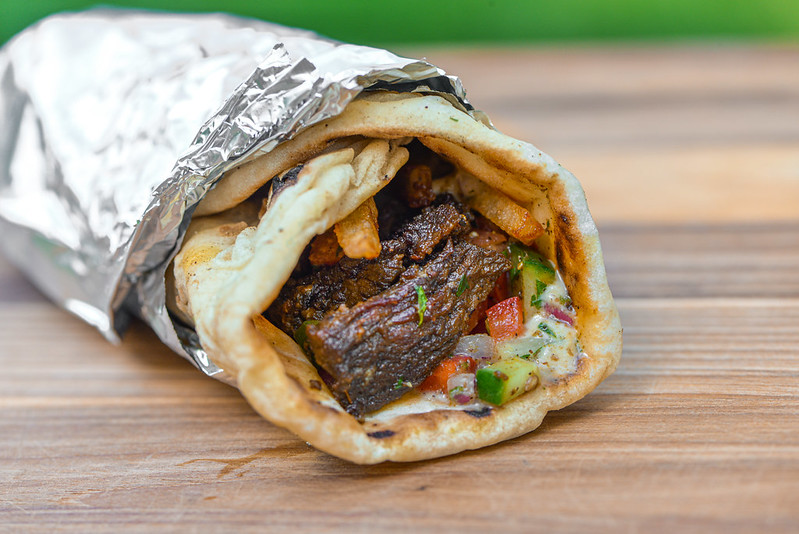 Having used this cooking method to simulate what happens on a vertical rotisserie, plus using a laffa, which was my bread of choice in Israel, I was hoping this would bring me pretty close to what I got while I was a student in Tel Aviv. It was definitely closer than past attempts, but it wasn't all the way there yet. Don't get me wrong, this sandwich was incredible and the main point of failure was that it was probably too flavorful. The seasoning on the beef had such a depth of earthiness and heat that it really stood out in each bite, so much so that it overshadowed the subtleties of the salad and hummus. I'm on the right track though because the beef was tender with pockets of crispness, both desirable qualities that were products of the method that paired low-and-slow with hot-and-fast cooking to get the best of both worlds. I'm totally confident that if you tried out this recipe as-is, it's going to produce an amazing sandwich you're going to love, and my quibbles are really around trying to replicate a very specific version of shawarma from my life, so that means you're still on this journey with me and there will be yet more stops coming in the future. 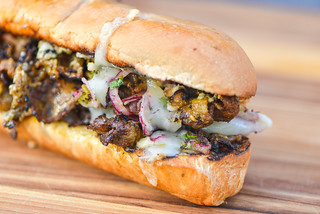