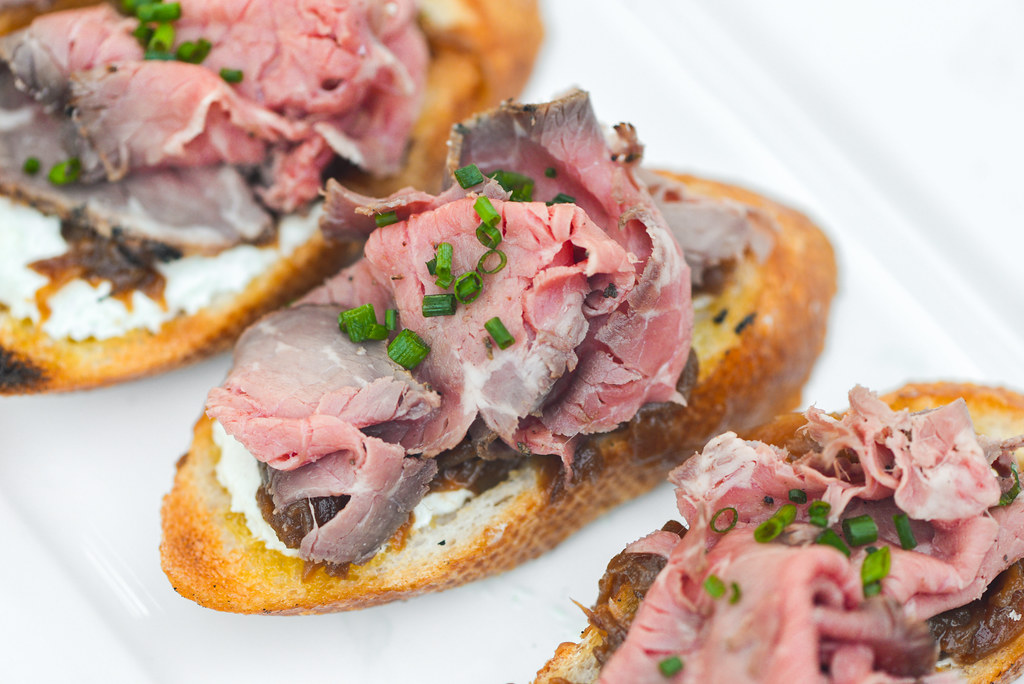 Back in the fall, I had a hankering to make some smoked roast beef. I acted upon that urge and ended up with the tastiest, juiciest roast beef I've ever made, but I also ended up with three pounds of meat and only two people to consume it. My plan was to have a couple friends or family join in and send them home with sliced beef for sandwiches throughout the week, but alas, no one was able to come over and I was left thinking of ways to use the beef in other manners beyond the couple sandwich meals I had already planned out. I found a really delicious solution with these smoked roast beef toasts with caramelized onions and horseradish cream sauce that were really kind of like another sandwich, but in appetizer, open-face form. 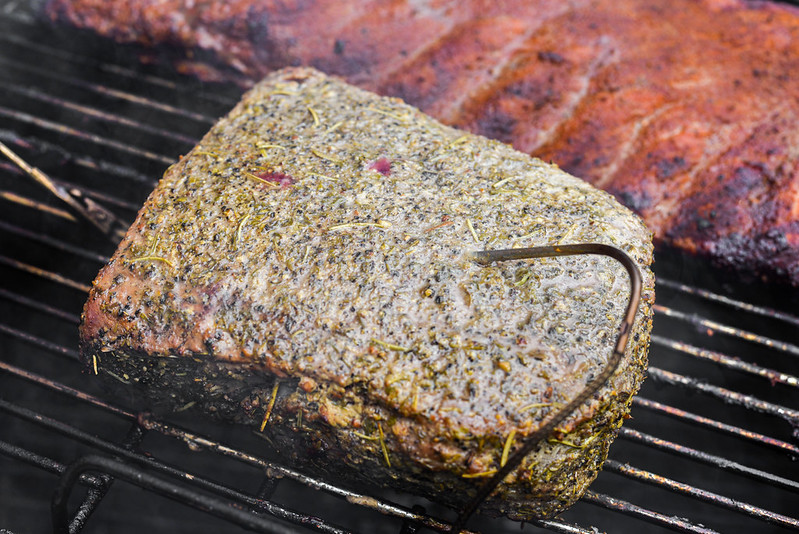 The roast beef here is the exact same one in the smoked roast beef recipe I wrote up back in December, so I won't go too much into the detail of the process, although I did include all the ingredients and steps needed to make it in the recipe. I utilized a top round roast here and coated it with mustard before applying a dried herb seasoning layer to the outside and letting it rest in the fridge overnight. The next day it got smoked until it hit an internal temperature of 125°F, which was just a little shy of the final 130-135°F medium-rare range I was shooting for. 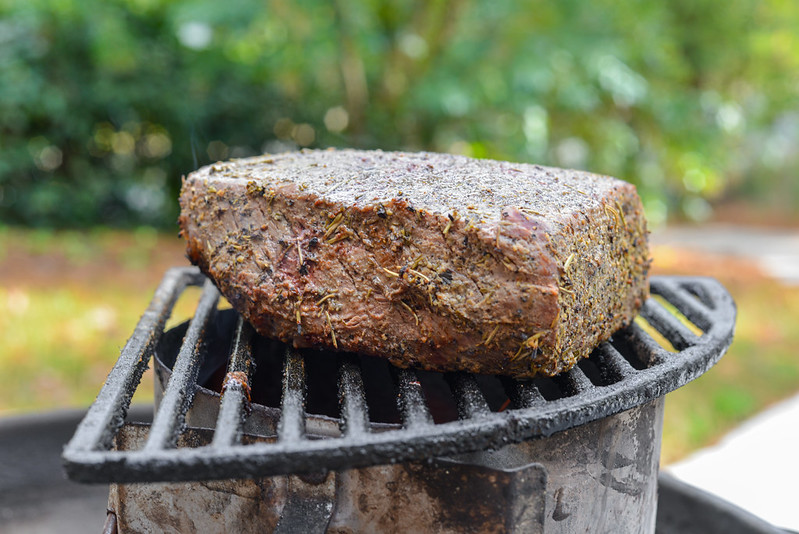 That was done purposefully to account for carryover cooking and the fact that the roast needed some time over high heat next in order to get a crusty sear on the exterior. To do that as fast as possible to avoid overcooking, I utilized freshly lit coals in a chimney, delivering an intense heat that browned the meat super fast. 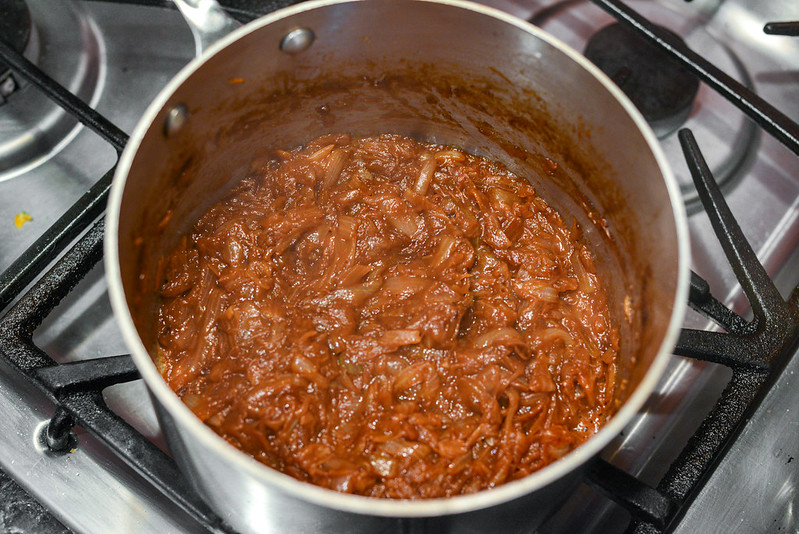 The idea for these toasts was partially born from the need to use up my roast beef, and then a secondary desire to make a batch of caramelized onions, which is something I like to have on hand in my kitchen and didn't at the time. Whether I'm using only a small amount or a lot, I usually make a large batch of these sweet and soft onions and then freeze the rest to have on hand. More onions do take a little bit longer to cook, but the effort really isn't more than making a small batch, so it seems reasonable to me to just go all in and make a ton at once. I like my onions to develop a deep, dark brown color and super sweet flavor, which requires a couple extra deglazes the pan and more cooking time, but feel free to stop at a lighter shade if that's more your taste, the final dish will taste just as good. 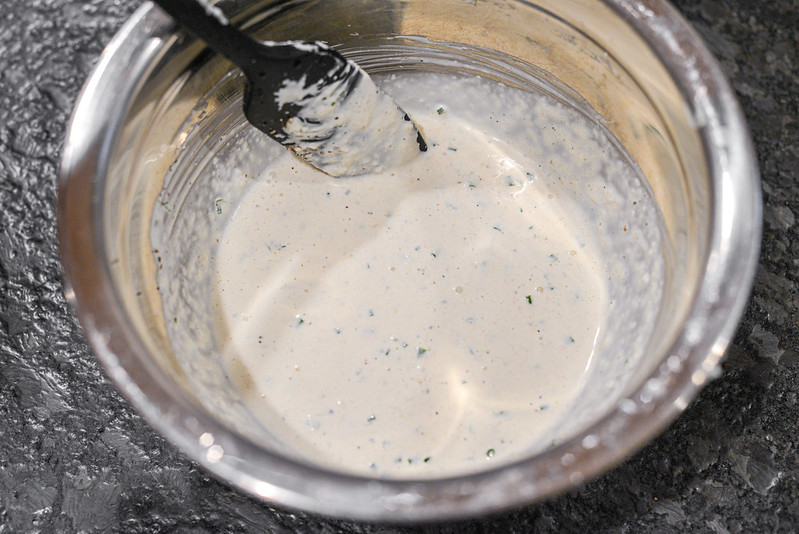 Sweet onions and smoky beef were enough of a combo for me, but I knew it would be better with some type of sharp contrast. A horseradish cream sauce felt the most fitting and classic choice here and I went for it. I had developed a recipe for a great horseradish cream sauce awhile back that started with whipping heavy cream, but after the effort of making the onions and roast beef, I felt like I could make things easier on myself with the sauce and instead started with a base of sour cream and mayo that I seasoned with a lot of horseradish, lemon juice, Dijon mustard, and chives. Honestly, I'm not sure how much you'd even notice the difference in the final dish between this version that took just a couple minutes to make and the one that required a ton of hand cramping whisking. 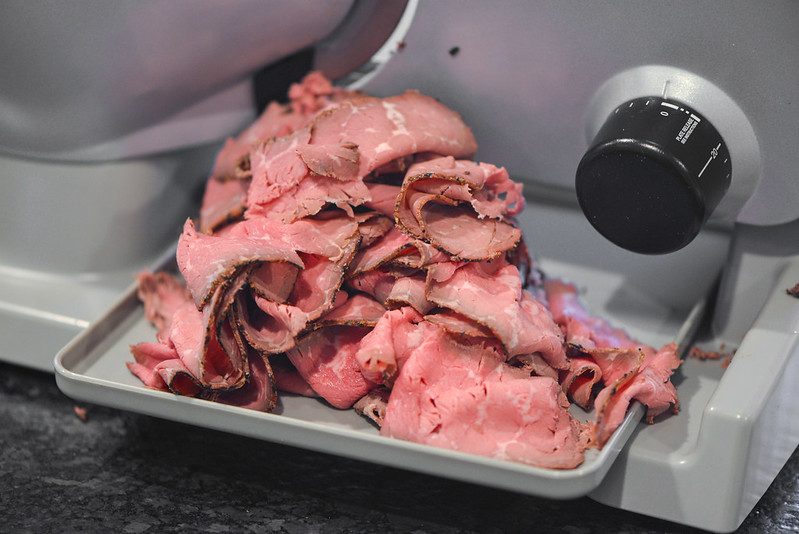 The roast beef is in its prime right after it's sliced, so I kept the roast whole until I had all the components made and it was close to time for final toast assembly. I actually made these the day after I made the roast beef, so I sliced the meat and served it cold, and that was great, but I could see a benefit to serving these with hot or warm roast beef, giving the appetizer a fresher taste overall, so the final recipe is written that way, but do whatever works best for your timing and schedule. 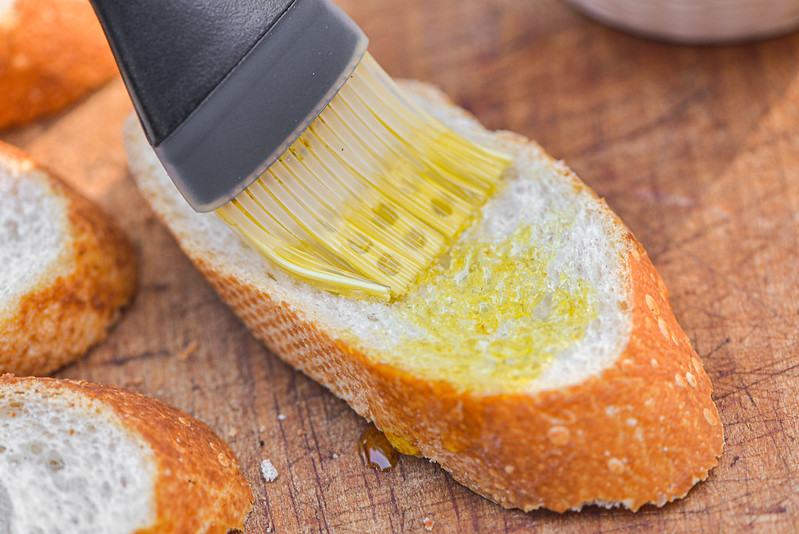 Another reason I wrote the final recipe to use the hot roast beef is because you'll already have a fire going to toast the bread with, making good use of the already lit charcoal that was used to sear the beef. Since this is a grilling site, it makes sense that I'm going to recommend grilling as a cooking method first, but again, no reason you couldn't do this step in a toaster or oven—that's what I would do over lighting a fire if the sole purpose was to merely toast baguette slices. 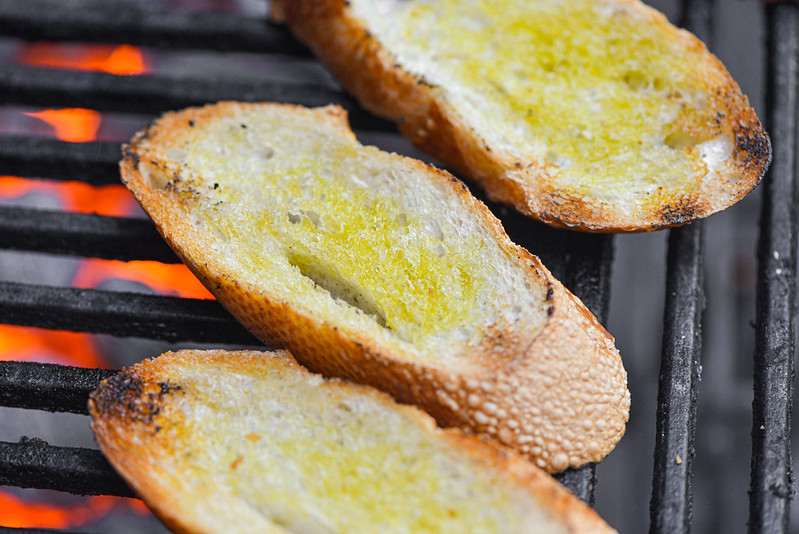 The grill's ample surface area is also a boon though when you're cooking en masse like this, letting you toast all the bread very quickly and potentially all at once. I was looking to have the baguette slices warm and crunchy, but with a little chew on the inside, so I was careful not to let them overcook or over brown, flipping the bread while it cooked pretty constantly to keep a close eye on how each piece was doing. 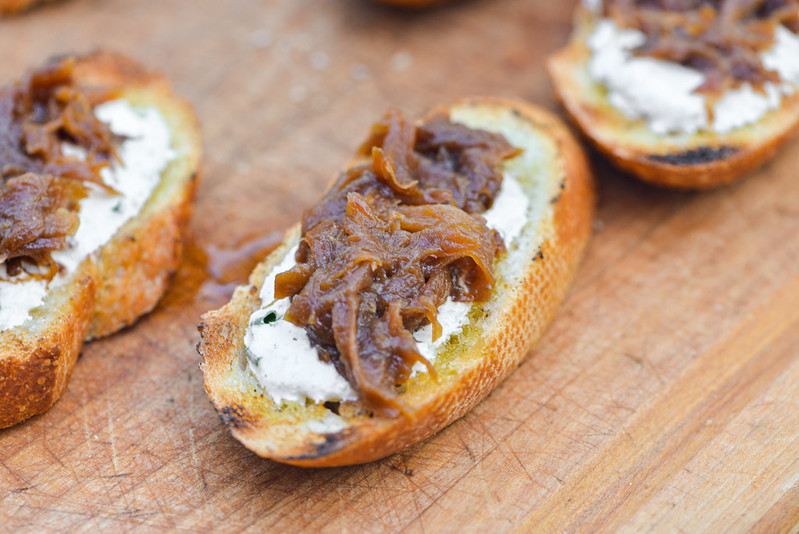 As each slice was done, I transferred it to a cutting board, and once all were there, I put the final toasts together by first spreading on a layer of the horseradish cream sauce, then spooning on a helping of caramelized onions, and finally topping with slices of roast beef and a sprinkling of chives. 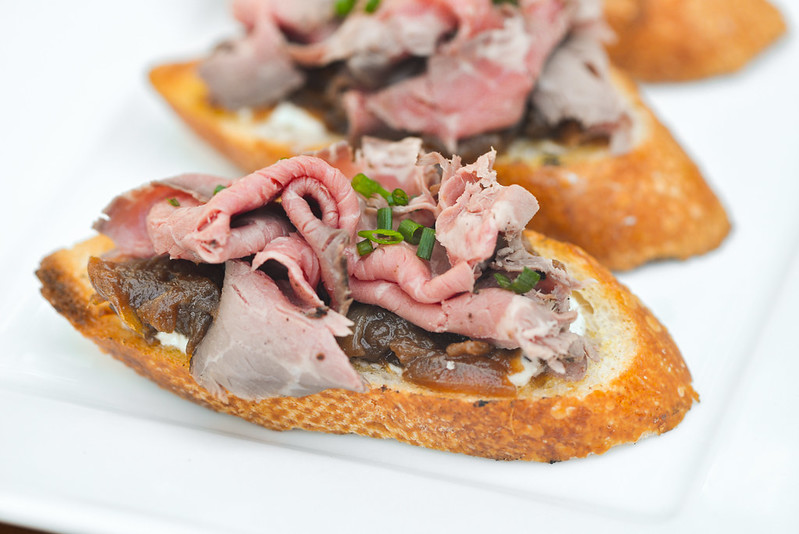 Like I mentioned earlier, this was really just another form of a roast beef sandwich I may may have otherwise made in the usual large format, but I'm a sucker for finger foods and I think that heightened my impression of the dish. If this were a sandwich, I would have eaten through it quickly and been done, but there was so much joy in being able to go back and eat piece after piece of these toasts. I probably ate way more than a sandwich's worth, but that's fine with me when each bite delivered a really well balanced mixture of flavors and textures that included the sweet onions being cut by the sharp bite of horseradish, smoky and juicy roast beef, and then the crunch and chew of the baguette. I felt very satisfied in this use of my leftover roast beef, but it also just left me longing to have additional friends and family to enjoy it with because as much pleasure as I got from eating them, it still doesn't compare to sharing my food with others. 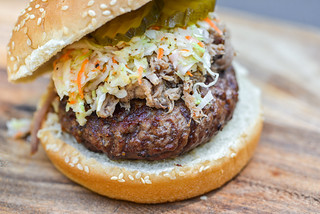