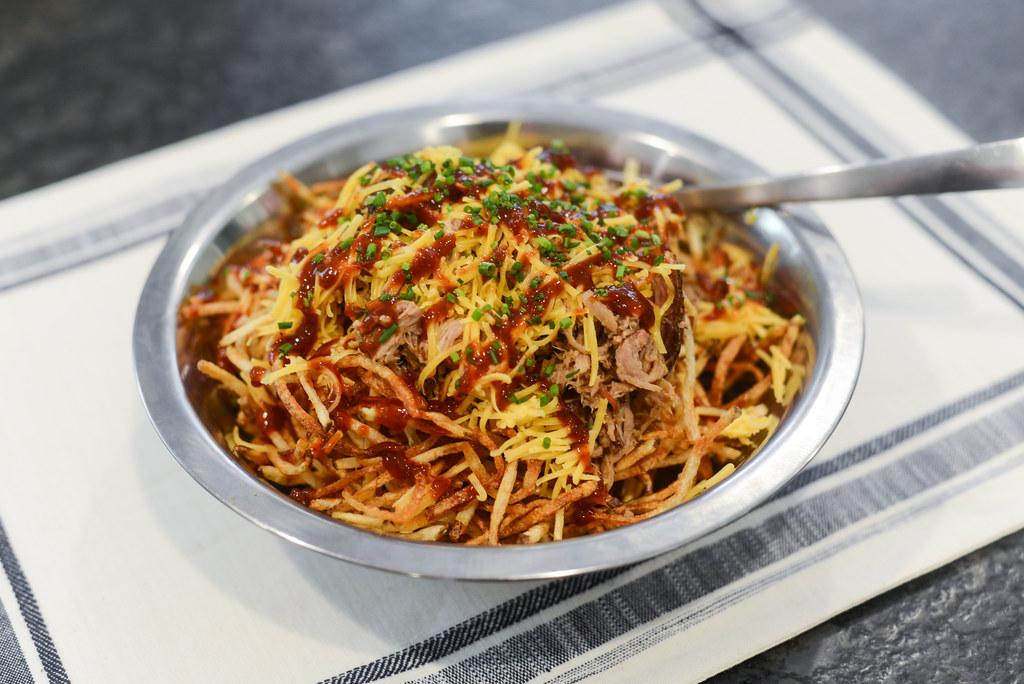 My kitchen is stocked to the point where I really don't need to add anything to accomplish just about any task I want to. This can be frustrating for someone who likes new toys like myself, and it's really just a waiting game until something breaks or outlives its usefulness to be able to replace it and be able to purchase new and improved model. This happened recently to my old mandoline, whose feet broke off in a way that was not fixable and rendered it unsafe for use. That mandoline put in about 10 years of great service, but the thought of replacing it left me more excited for the new than sad about the lost of the past. I went straight into research mode and after some time, settled on an OXO brand mandoline that seemed to strike the perfect balance of features, positive reviews, and value and went out and bought it post haste. One of those new features for me was a shoestring slicing option, and it didn't take me too long to make use of it when I decided I needed these pulled pork fries in my life. 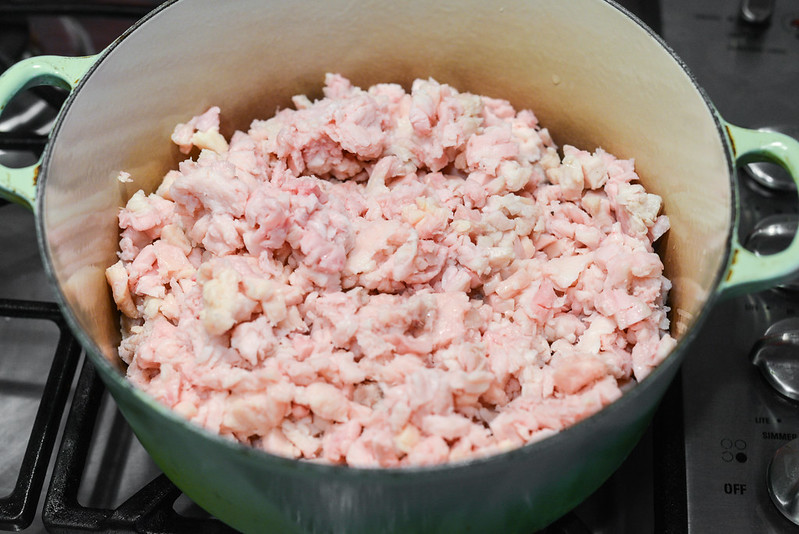 This recipe was really just a way to make use of leftovers, but leftovers in Meatwave-world take things a few steps further than most. Beyond the pulled pork I had saved in the freezer, I also had at least a couple pounds of trimmed brisket fat sitting in the fridge. In the past, this would get used in sausages or tossed, but with fries on the mind, I decided to make it into beef tallow for frying. It was a rather simple, yet lengthy process, starting with cutting the fat into small pieces (at the end of chopping, I had wished I had just threw it all into the food processor and pulsed). 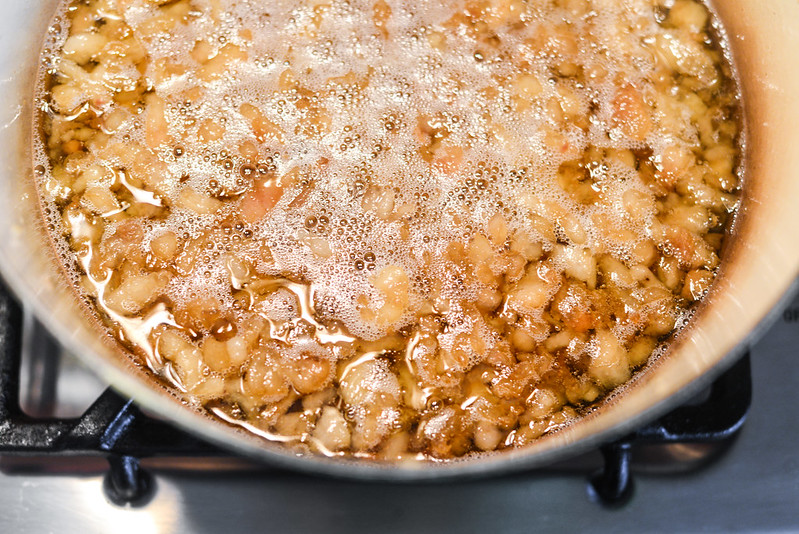 I then placed the fat in a dutch oven with a little water and heated over medium-low heat. I began this before I started working the day, and let it go until it looked sufficiently rendered, which was a little bit after lunchtime—so it took about 4-5 hours total. 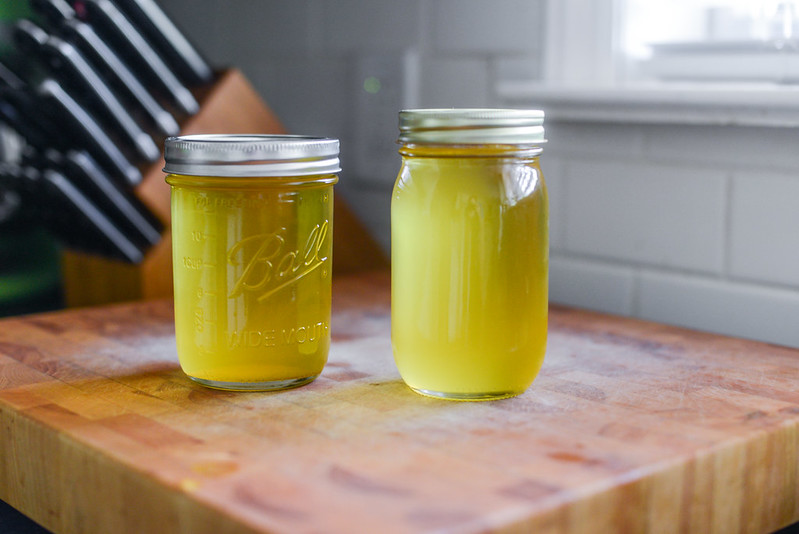 I then strained out the solids and placed the liquid into mason jars for storage. It smelled wonderful and was beautifully clear, then turned solid white after placing in the fridge. I hoped this tasty fat would give a boost of flavor to this batch of fries, as well as many other things I hoped to fry in it down the road. 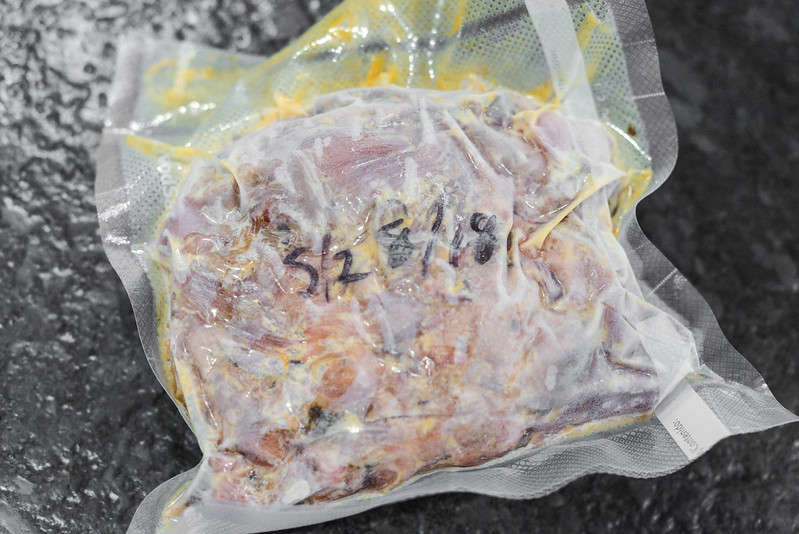 I've mentioned in many previous posts that whenever I smoke up pork shoulders, I always to do extra for freezing, allowing me to have barbecue always on hand for either new recipe ideas or just when I need a smoked meat fix. So far this had led some great stuff like pulled pork egg rolls, barbecue nachos, pulled pork empanadas, and more! 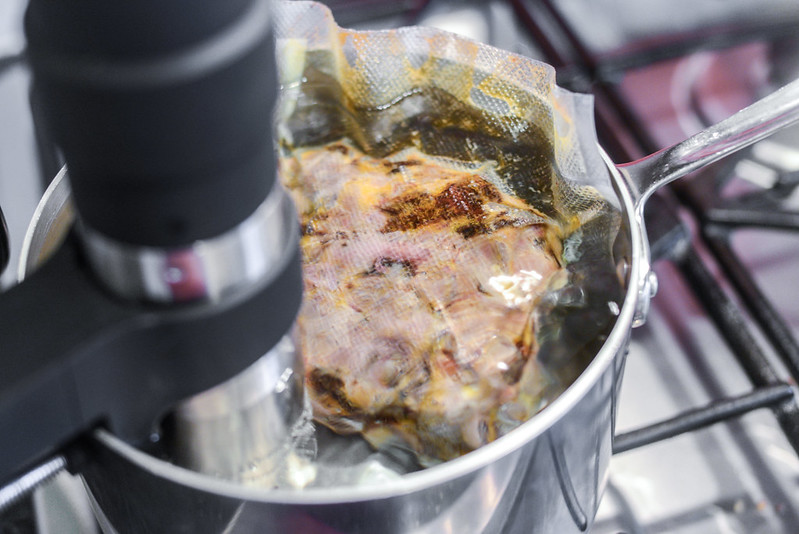 I don't know why I never thought of this before, but using my immersion circulator seemed like a great way to defrost and reheat this stuff. I usually just dump it into a pan and heat, but it ultimately never tastes as juicy and needs a fair amount of extra sauce to help it out. I let this bag of pork sit in the 135°F water bath until it was time to use it and it was so much juicier than ever before—not quite like fresh pulled pork, but definitely much closer. 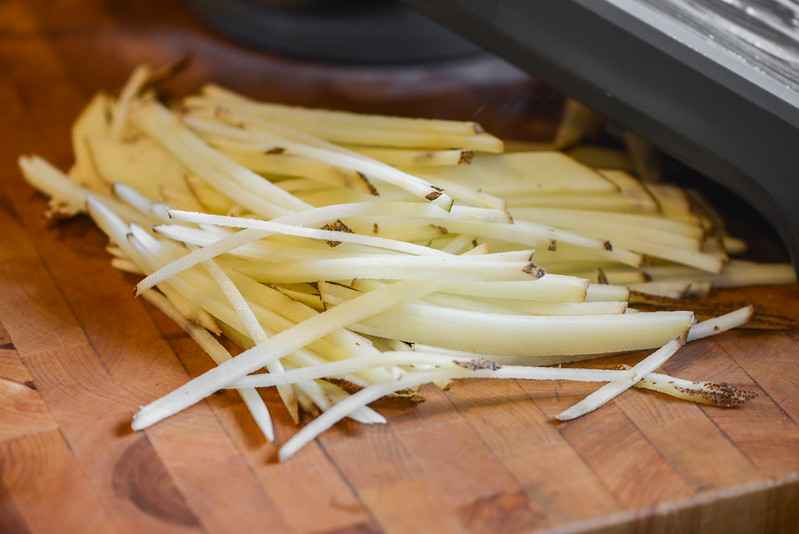 Now onto the one new piece of this recipe—the fries. I love crunchy shoestring fries, but never made them at home because I wasn't about to dice up a potato into such small, thin pieces, which felt like was a recipe for injuring myself. So I was super excited that my new mandoline had this cut option, which made quick work of slicing three potatoes into these super skinny matchsticks. 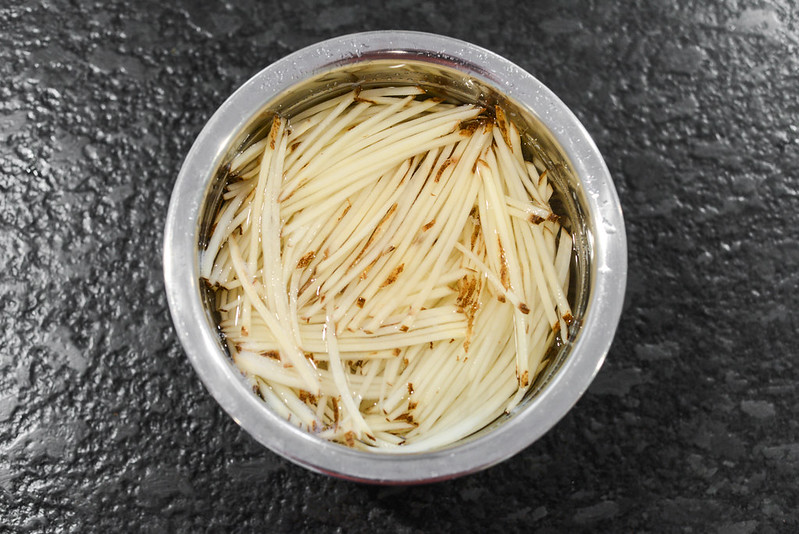 Just like as I would do with regular fries, I then placed the potatoes in a bowl and covered with water. This helps wash off some the starch and keeps the spuds from browning as I worked in batches to fry them all. 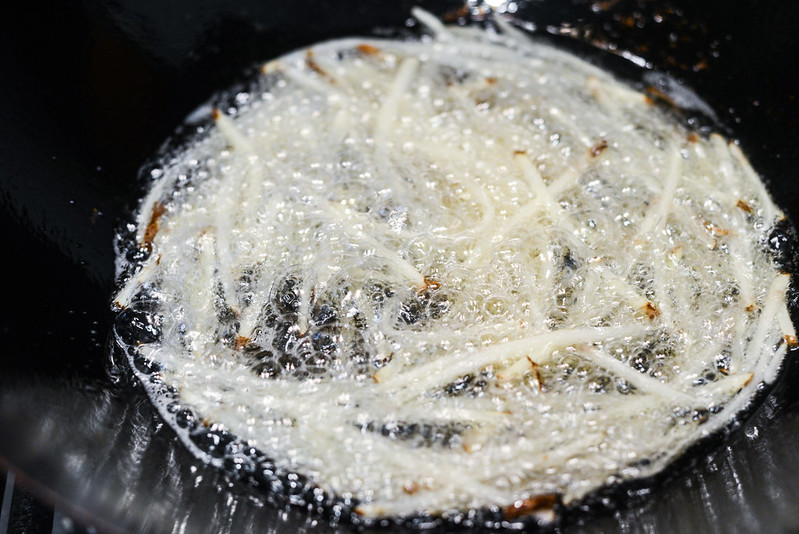 Just heating the beef tallow filled the kitchen with an intoxicating aroma. Usually frying leaves my house with an odor most reminiscent of fast food restaurants, but the tallow had a beefiness, and steak-like smell that was welcomed by me. The frying was pretty quick and easy, especially when compared to regular fries, which I double fry—first at a colder temperature to soften the potatoes, then at a higher temperature to crisp them. 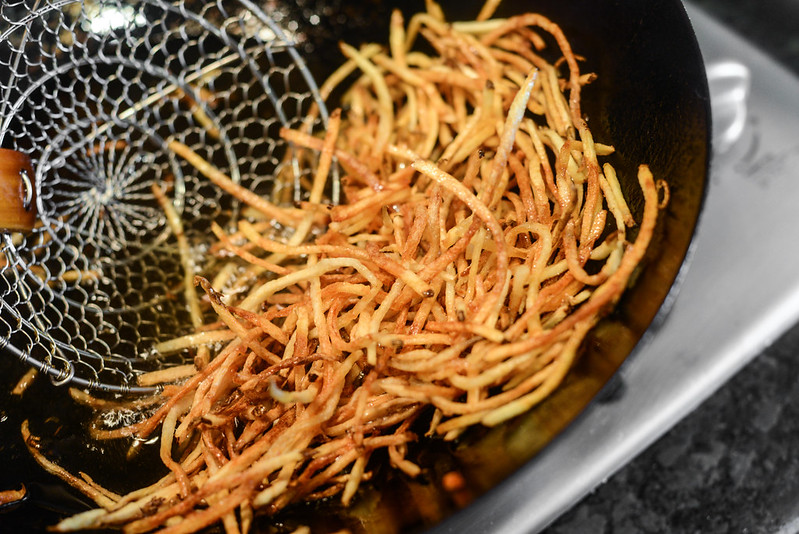 For shoestrings though, it's all about the crispness, so one fry at 375°F was all that was needed to render them gold brown the crunchy. I worked through the cooking in a few batches, making sure not to add so many potatoes at once that it dropped the oil's temperature so much it would take too long to recover. 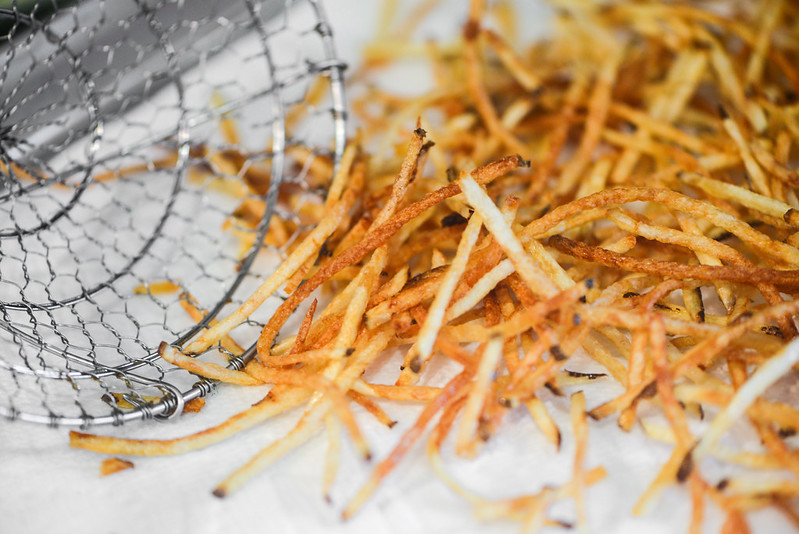 As each batch was done, I transferred the fries to a paper towel-lined baking sheet, seasoned them with salt, and allowed them to drain. It was almost impossible to not to eat them as I continued frying the rest. They were really stellar specimens—perfectly crisp with a mixture of potato and beefy flavors that pair so well together. 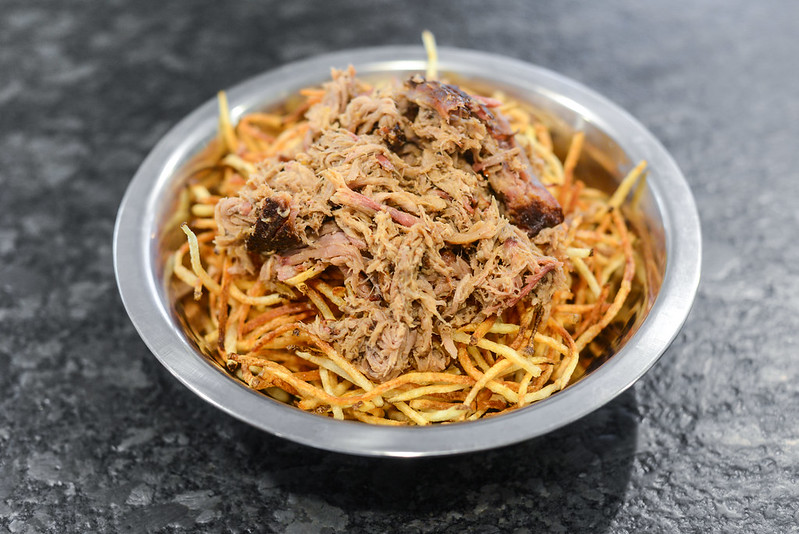 Once all done, I piled a portion of the fries into a serving bowl and began the final construction. This included a hearty portion of the warmed pulled pork, followed by a generous helping of cheddar cheese, a squeeze of my cherry-chipotle barbecue sauce, and a final sprinkling of fresh chives. 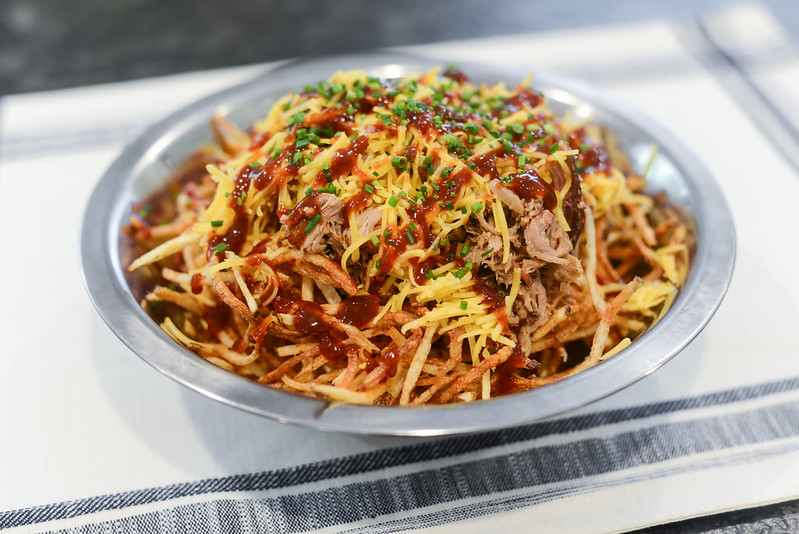 Now this is what a Meatwave snack is meant to be. It consisted of a lot of leftover items from past cook outs, but was entirely new and tasted super fresh. I already said those spuds were killer, but add in that smoky pulled pork, and their awesomeness just increased ten fold. The cheddar was right cheese to match with the barbecue flavors, which was enhanced by that great spicy and fruity sauce. The chives not only brought a little green into the mostly brown party, but their hint of freshness was a welcome addition, although it really didn't do much to balance our the otherwise super heavy dish. I had made a bowl of fries that should have fed at least two people, but ended up downing it all myself it was so good—and as someone who doesn't eat a lot of leftovers, that's saying a lot. 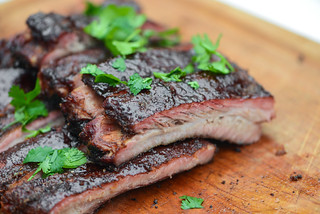 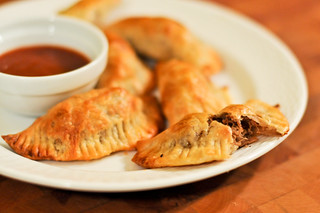