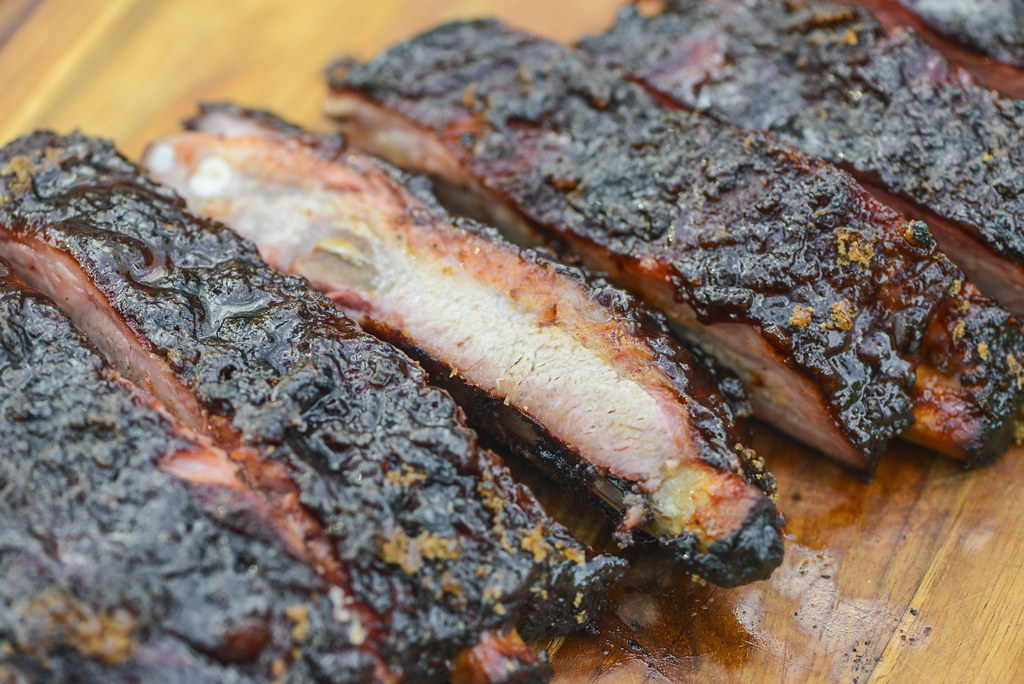 I know relocating south put me in the heart of barbecue country, but I actually felt more connected to the community when I was in New York. A big part of that was due to the Big Apple Barbecue Block Party, which brings pitmasters from across the country into the city for one fantastic weekend. As this year's event approaches, I feel a longing for the times when I could see all my friends I've made over the years all in one weekend, not to mention partaking in the excellent meats being smoked up. One such past offering from the event that holds a warm spot in my heart are the ribs from Pappy's Smokehouse, which are finished with a torching to give them a really unique, sweet crust. In honor of of those ribs, I tried out the method myself with my standard spare ribs recipe, ending up with what I'm calling "bruleed ribs." 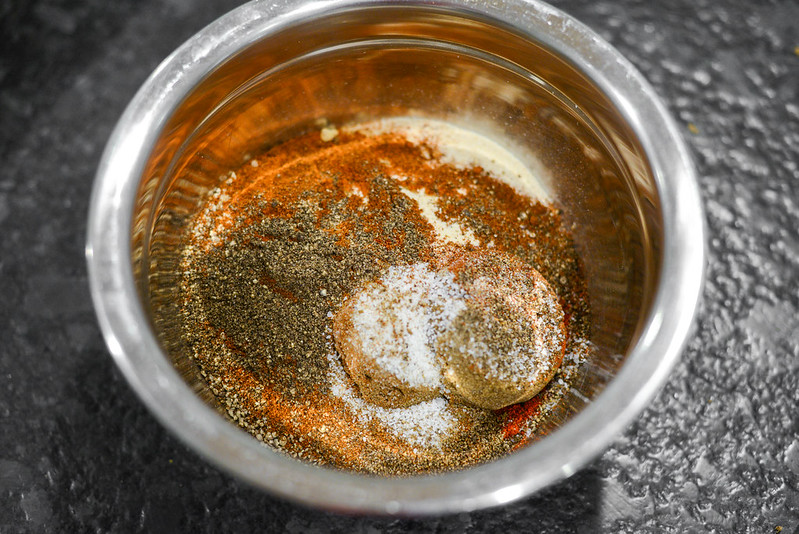 The ribs from Pappy's seemed to have pretty minimal rub and sauce components, which made them stand out from their brethren, but I figured for my first go at torching some ribs, I'd start off with my normal recipe rather than take a shot at duplication of someone else's. I used my base pork rub, which is sugar heavy, but balances the sweetness with layers of spices, chilies, and salt to create what I think it a pretty well rounded, all purpose barbecue seasoning. 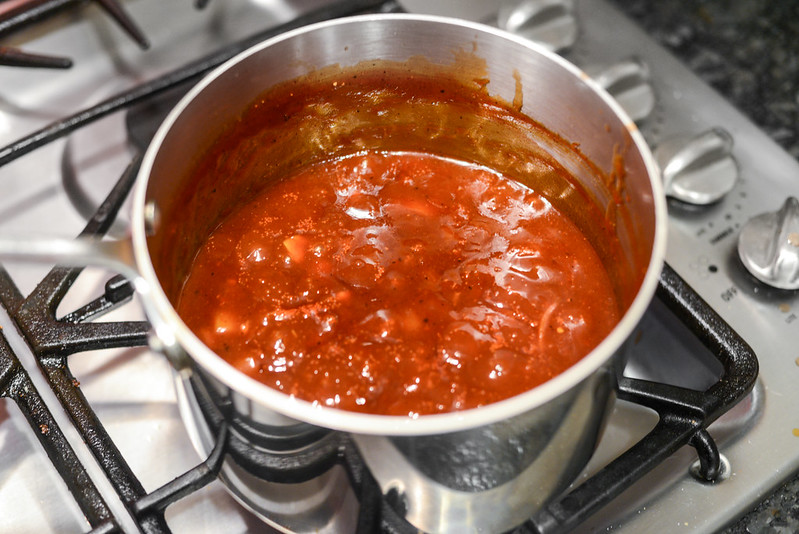 Then for the sauce, I cooked up a batch of my base sweet and spicy recipe. As I was cooking this, I thought to achieve the best contrast with an extra sugary crust, a spicier sauce would actually be the right path forward, so ended up adding in more chilies and hot sauce to beef up the heat more than I normally would. 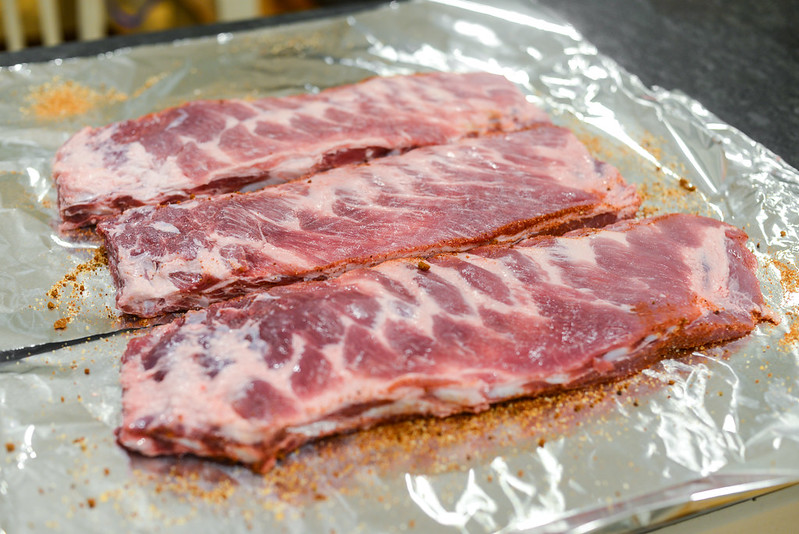 Next I prepped the three racks of spares I had bought. I first trimmed each down into a St. Louis style cut. Then I peeled off the membrane from the back of each rack, sliced off any excess meat and fat, and finally gave each a generous coating in the rub. 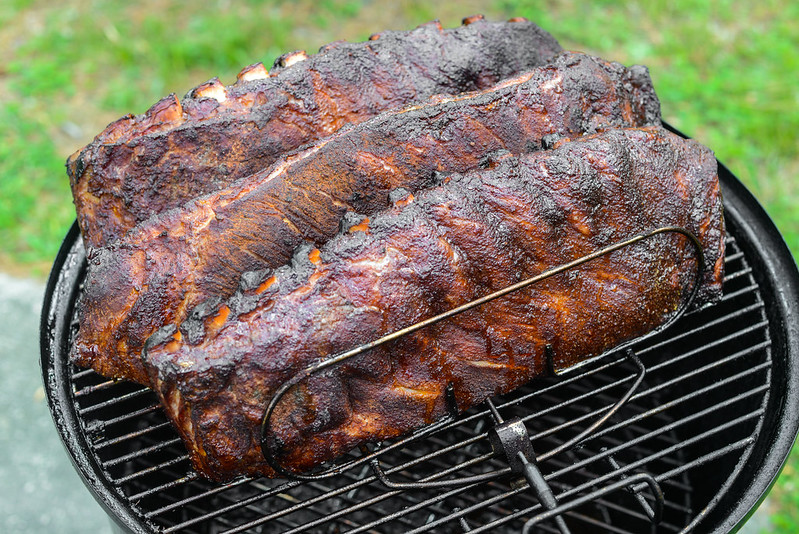 Then into the smoker running at 225°F they went. When smoking ribs, I don't revolve the cook around temperature as I do with most meats. Instead, I'm looking for two specific characteristics. The first is color, and when the ribs reach a beautiful mahogany tone, as the ones in the photo above, I start spritzing them with apple juice. 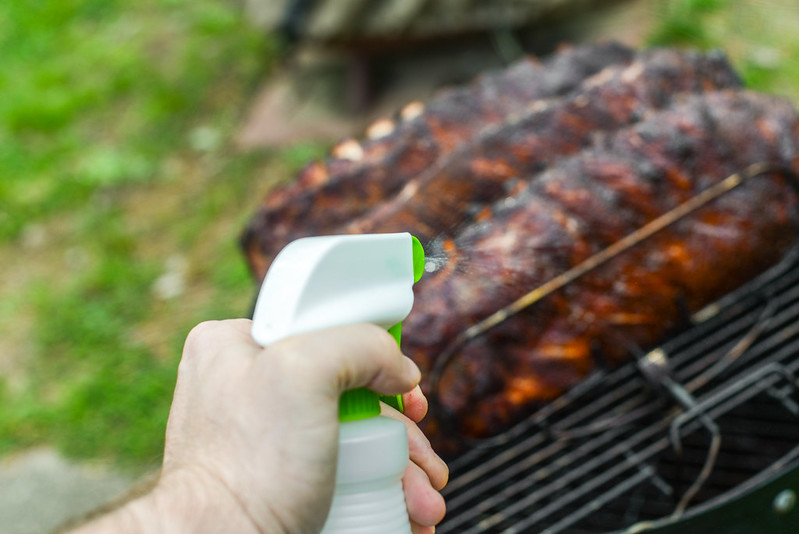 I then repeat spraying them every 45 to 60 minutes. I do this to help preserve the color of the ribs. Before I took up this procedure, I often ended up with ribs that had a thick, blackened bark. They still tasted good, but ones that I gave a liquid misting to tasted and looked better. 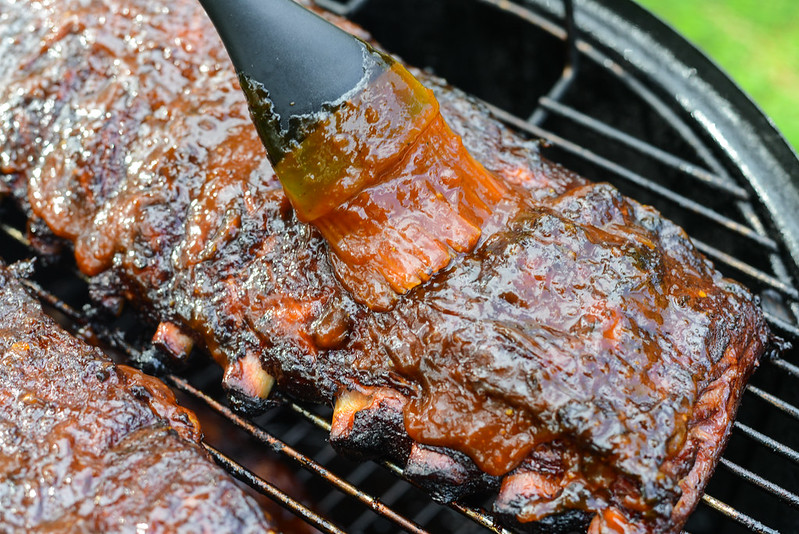 The second thing I'm looking for is doneness, which I test by lifting the racks from one side and seeing if they have a slight bend to them. When the ribs do this, they're done, but not overdone—you know if they're overcooked because they'd fall apart when given this test. Knowing this usually happens around the six hour mark for spare ribs, in the last half hour of cooking, I brushed on barbecue sauce, which allowed enough time for it to bake down and caramelize a bit. 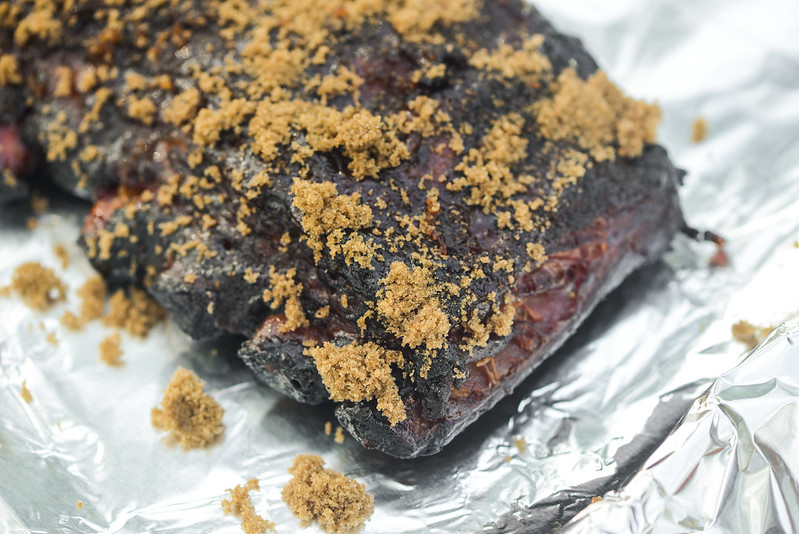 On any normal day, my ribs would be done at this point, but I had an extra step planned for these beauties. I wasn't quit sure the best way to apply a sugar coat to the racks, and think I can improve on this in the future, but I basically just sprinkled about a quarter of a cup of dark brown sugar on each slab to start. 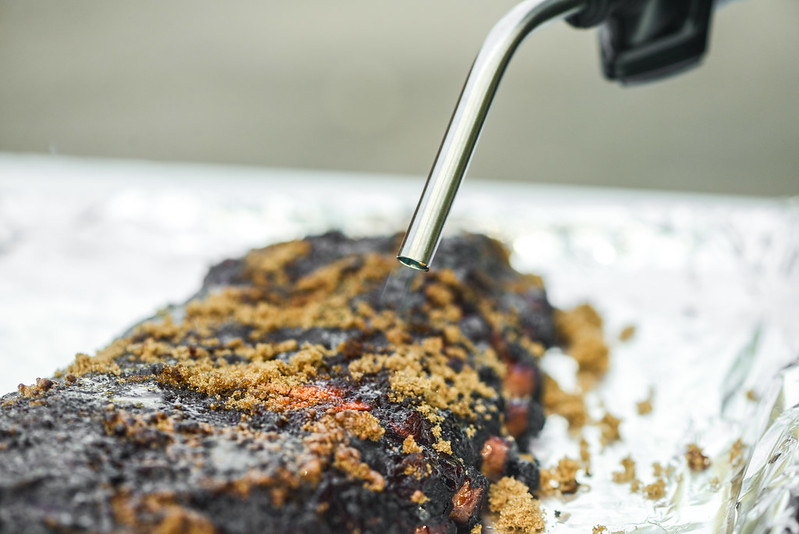 I then got my blowtorch going and applied heat until the sugar melted and crisped. Because my sugar coating wasn't super even, I ended up with some deeper and lighter areas of sugar, and some spots not fully caramelized because I worried more heat would turn the sugar from crisp to burnt. 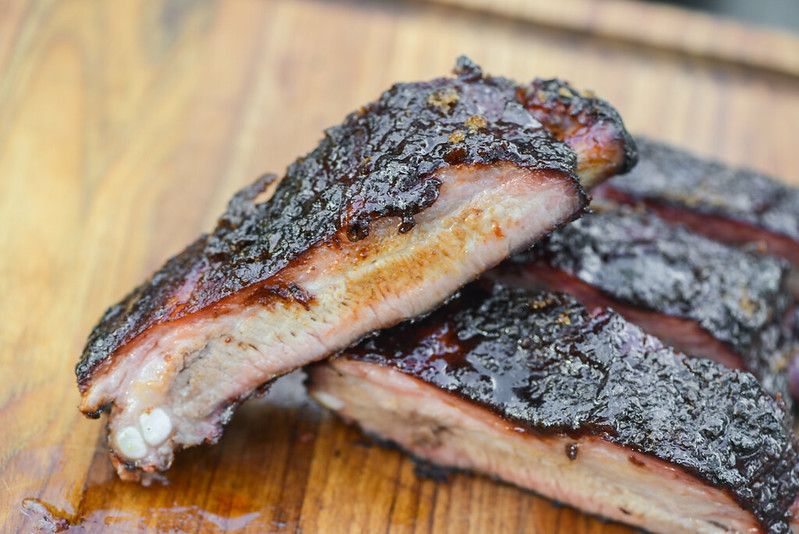 That imperfection didn't matter much though because these tasted amazing. I bruleed two of the three racks I made, and definitely was digging the ones with the crisped sugar way more. The extra sweetness and crunch added a lot to the end experience, which still captured all the spicy, smoky, complex character of barbecue ribs. It was really just an added bonus, one that you wouldn't necessarily miss if it's not offered, but definitely adds something special when done. So I probably won't be bruleeing all my ribs, but when I want that little extra impressive edge, I'll go for it. This method is exactly why those ribs from Pappy's continue to hold a fond place in my mind, even though it's now been three years since I've last had them and was able to hang out with my barbecue buddies at the Block Party.