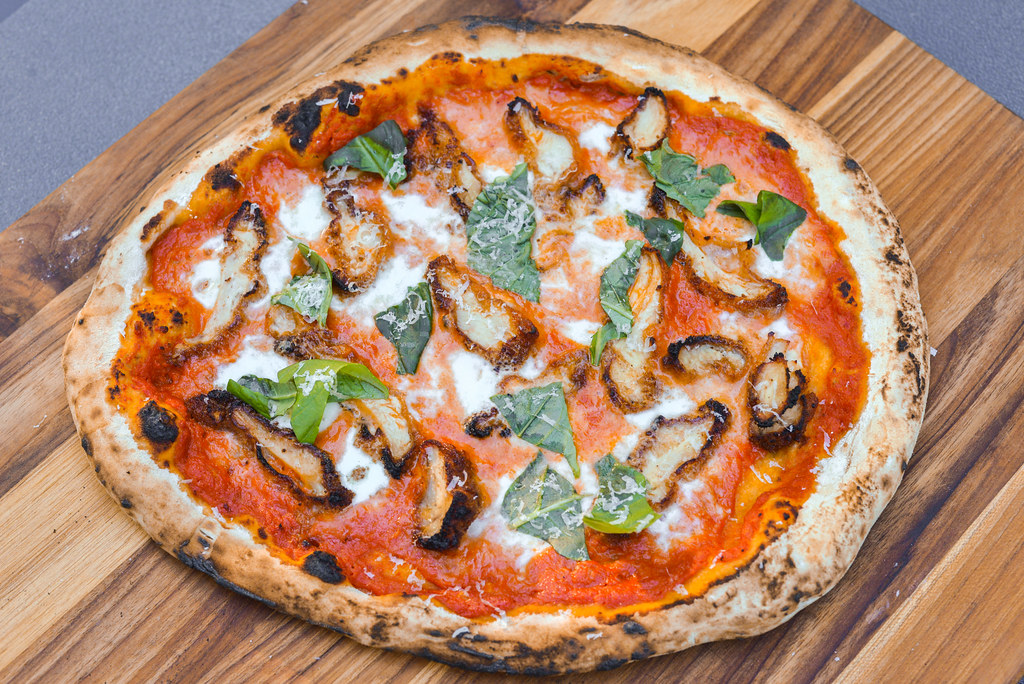 There isn't too much I miss about office life having exclusively been working from home for a year and half now, but one thing I do find myself wanting for every now and then is the catered lunch meeting. Lunch is a popular meeting time at my work and that hasn't ebbed during the pandemic, which means it's actually harder to get a meal in. When in the office though, the call to gather during lunch hours usually came with the promise of being fed, and, at least for me, that's an incentive I all in on. One of the most frequent lunch options provided is a pizza place called Emilio's, whose claim to fame is a chicken vodka pie that's loaded amply with sliced chicken breast and then dosed in a vodka sauce that's probably more cream than tomato. It's a hell of a slice, and it's also incredibly heavy and filling—I may have dozed off in a meeting or two after eating that pie. That specific pizza isn't one I've really seen many other places, and to satisfying a recent hankering for it, I made a version at home that had a much lighter touch, but was equally delicious. 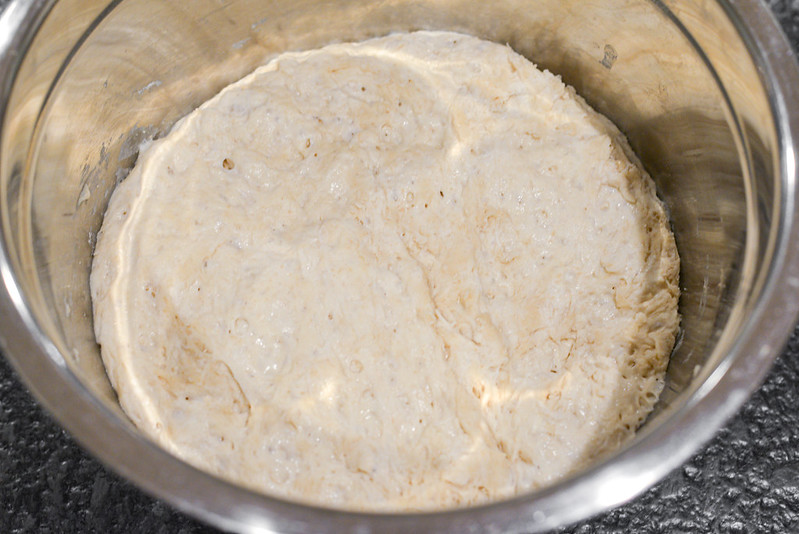 There are many ways I lightened up the pie, the first being the choice of crust, which I went with a Neapolitan-style. Compared to a New York-style crust, the Neapolitan is thiner and airier, so it doesn't have as much heft to it. Those traits come from the high hydration and long fermentation that happens initially with an eight hour rise at room temperature. 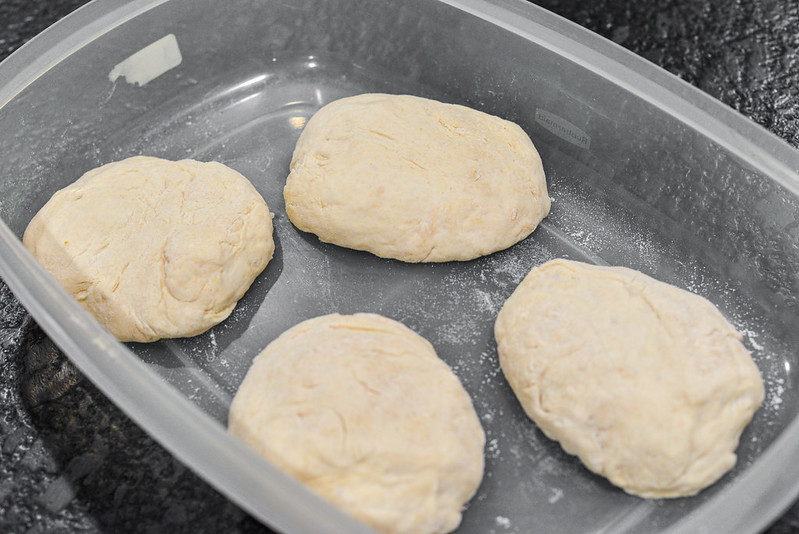 Once that is complete, the dough is divided into four, placed in a container, and set in the fridge to rise another two to four days. Beyond the gluten formation happening during that time, a lot of flavor also develops thanks to the fermentation process. This is what gives Neapolitan dough a bit of tanginess, making it more flavorful than a New York-style dough which doesn't go through the same long process. 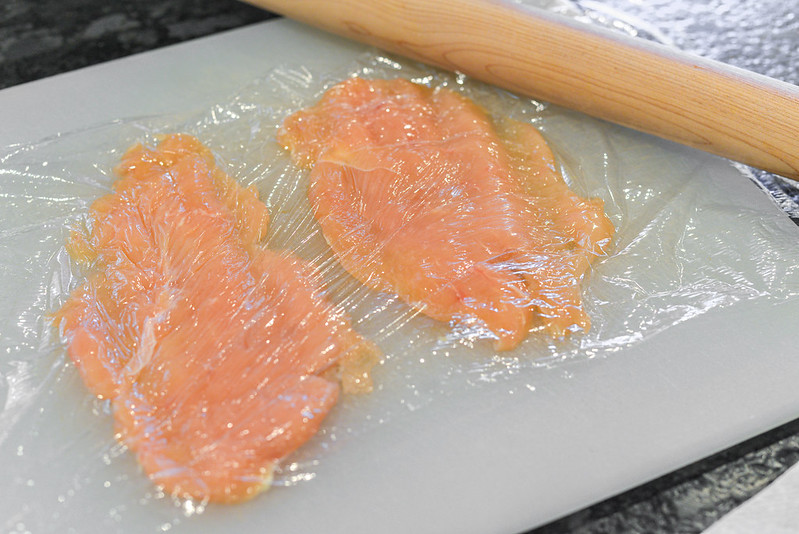 As if chicken, vodka sauce, and dough isn't heavy enough, that chicken is also breaded and fried. I really like that extra crunch from the breading, so decided to keep that aspect in my recipe. Chicken schnitzel is a go-to Friday night dinner for me, so it wasn't much extra effort to make a couple additional pieces one Friday evening to use for pizza the next day, but if breading and frying feel like more effort than it's worth to you, feel free to go with some simple grilled or sautéed chicken here—I don't think you're going to go wrong once it's assembled into a pizza. 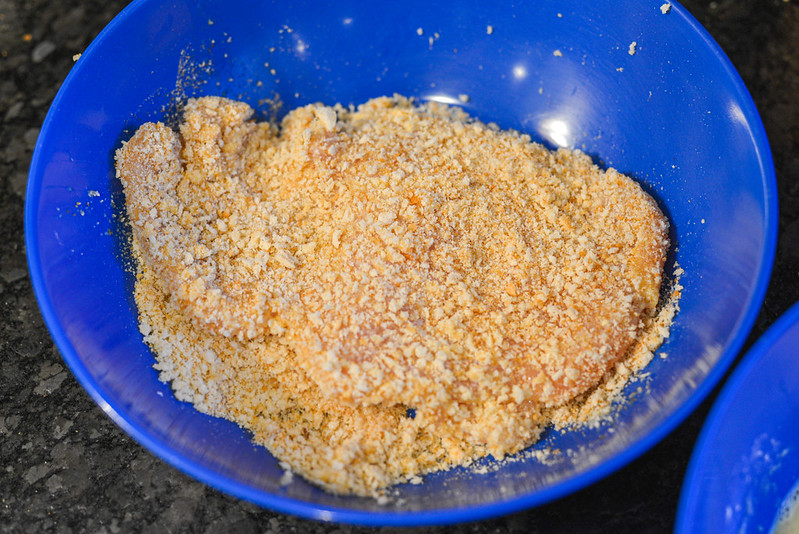 To make the chicken, I took one large breast and split it in half horizontally, then pounded those two halves into an even thickness roughly a quarter inch in height. I then dredged the breasts in flour followed by a coating in a beaten egg. Then I applied the breadcrumbs which I also patted down with my hands to ensure they adhered well. 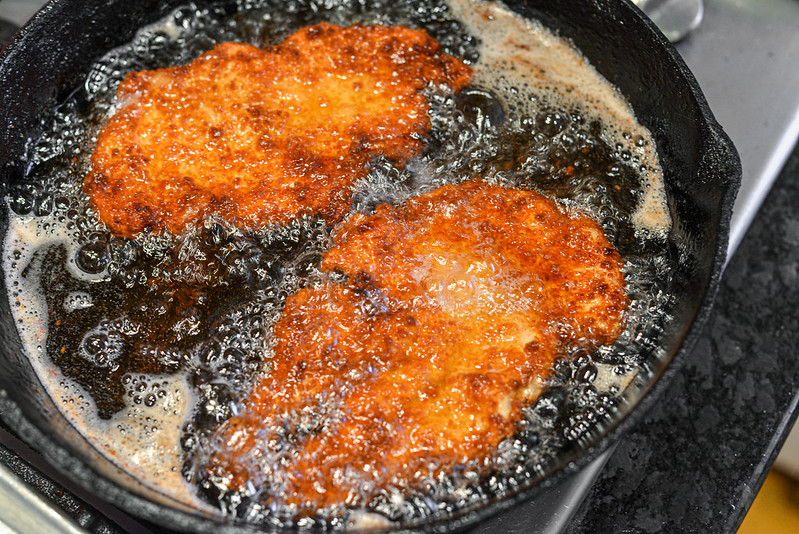 Then into canola oil heated to 375°F the breasts went. Thanks to the thinness of the chicken, it didn't take long to cook through at all. In just about all of the schnitzel making I've done, by the time the breadcrumbs have turned a medium to dark golden color, the meat is always done. I do like the flip the breasts somewhat frequently to ensure they're cooking evenly and not over browning—a cast iron pan doesn't heat evenly, so burning the breading is the schnitzel mishap I most commonly encounter. 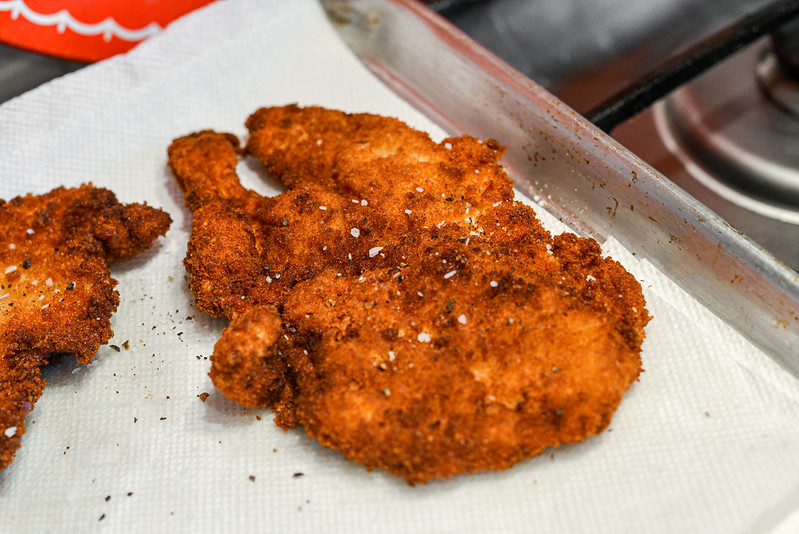 When the chicken was done frying, I transferred it to a paper towel lined tray to drain, and seasoned with salt and pepper at the same time. If you're making the pizza right away, you can cut the breasts into strips at this point, otherwise the chicken can be stored in the fridge until ready to use, which is what I did since I completed my frying the night before. 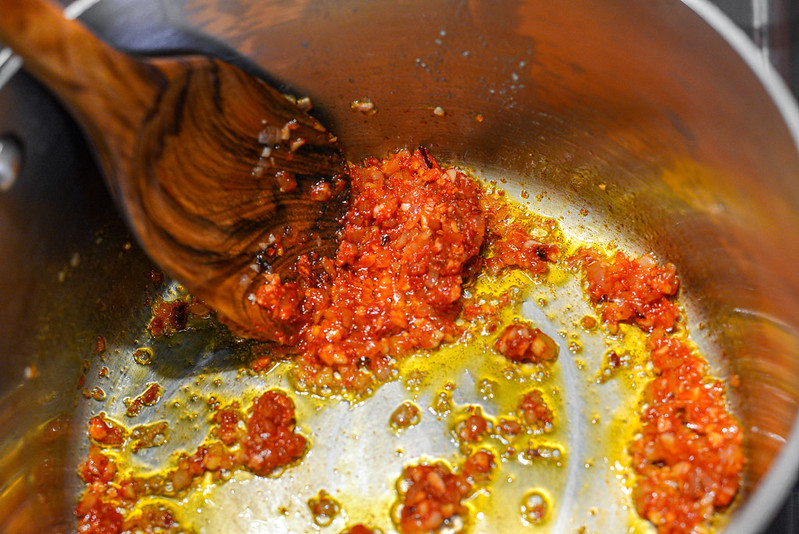 Next I busted out a recipe for vodka sauce I developed in my early days of writing a Sauced column on Serious Eats. I haven't made this in awhile, so I wasn't sure how well it would hold up over time, but I was very pleased with the resulting sauce. The recipe starts with sautéing shallots until softened, then adding in tomato paste, crushed red pepper, and garlic and stirring until fragrant. 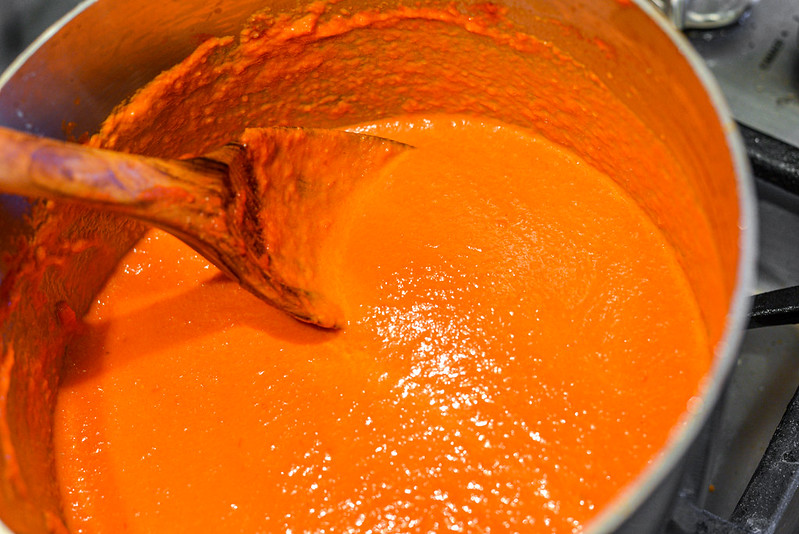 Then a can of crushed tomatoes and the vodka are both added in and simmered until slightly thickened, about ten minutes. I like a smooth sauce, so I then opt to puree the sauce with an immersion blender, and following that is when the cream is stirred in and heated until just warmed through. Like the chicken, this can also be made in the days ahead and stored in the fridge to keep day-of work focused on the pizza baking if you like. 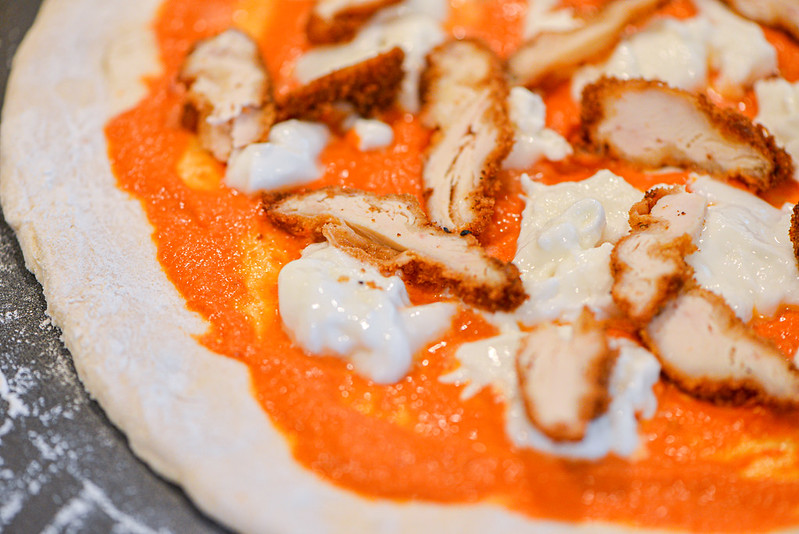 On my pizza making day, the first thing I did was remove the dough from the fridge since it needed to come to room temperature to make it easily stretchable. Then I fired up my KettlePizza about an hour before baking time so all the coals would be lit and the stone would have had time to become throughly heated. Finally, I stretched out the dough, spread on a fairly generous layer of vodka sauce, and topped that with torn mozzerella and slices of the chicken. 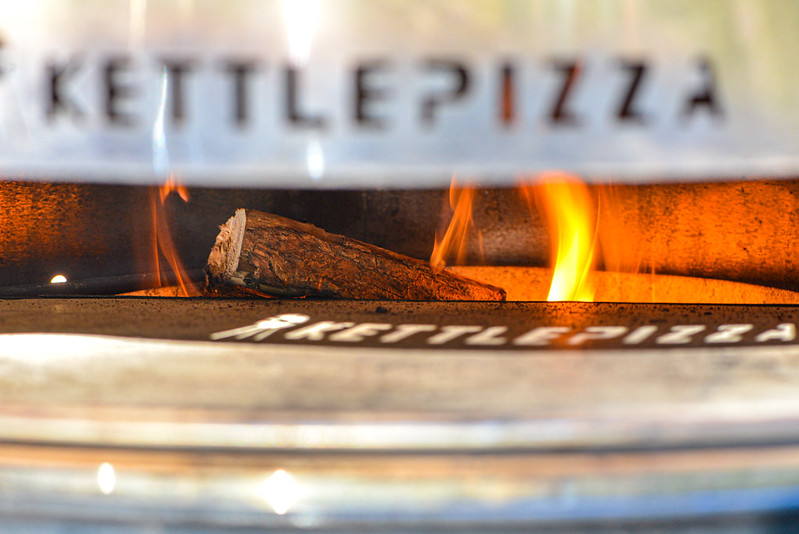 I forgot to take a photo of the pizza actually cooking, but you can imagine what that looked like. I didn't fire it until I had added some small logs to the basket behind the pizza stone and those were ignited. The heat produced but that wood is what boosts the core temperature past 900°F and cooks the crust incredibly quickly, giving it that ideal puff and char. 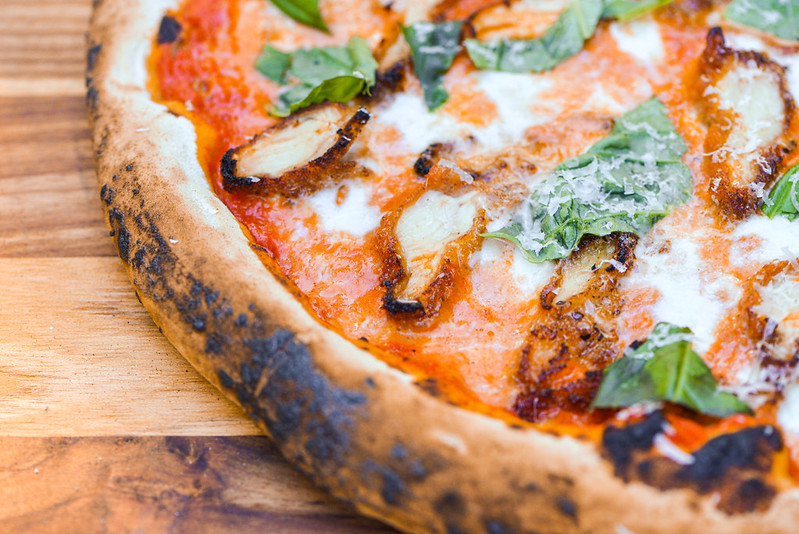 It took only a couple minutes to fully cook the pie, and once done, I grated on some parmesan and sprinkled with torn pieces of basil to add the finishing touches. I think if you were to eat the inspiration pizzas from Emilio's and this one side-by-side, the similarities would be mostly in name only as this turned out to be a pretty different pizza experience. The vodka sauce provided a really nice change of pace from the standard tomato sauce, having a less acidic edge and more mellow character thanks to the addition of cream. It melded more than contrasted with the creamy mozzerella, which was good because I think that gave the chicken more of a presence given its more sparse application than in the inspiration. It certainly delivered a "vodka chicken pizza" experience that wasn't so heavy handed that you couldn't enjoy at least half a pie before starting to become full, which is definitely not what the Emilio's pizza is like—one slice and you're pretty much done for. While this satisfied a craving, it also left me a little more nostalgic for the lunch meetings that have gone absent—I should probably be careful saying that though, because I'm sure once they're back in full force, I'll just be wishing to be home all the time again. 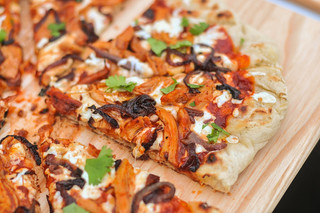