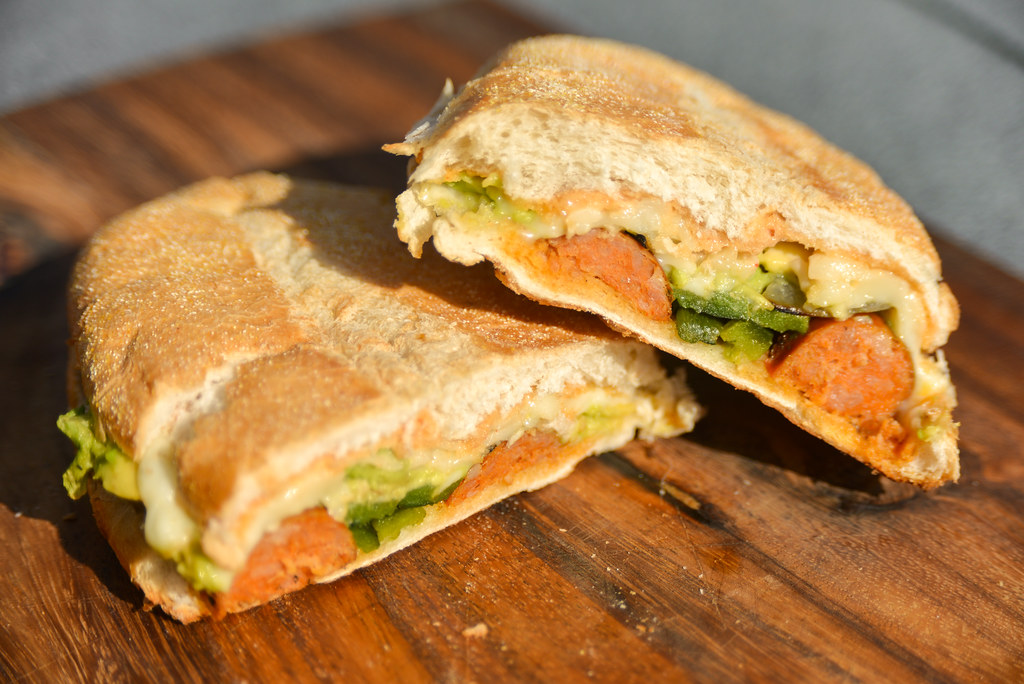 Longtime readers of this blog are probably already familiar with my enthusiasm for Cinco de Mayo. Tex-Mex is up there with barbecue as a favorite cuisine, so a holiday that glorifies the American bastardization (I say that with only the most delicious connotations) of Mexican food culture is something I can take to celebrating. Not that I need an excuse to fill my grill with delicious fajitas, stuffed poblanos, and tacos, but given one, I go with it and then some. I get so excited that I find myself trying out new recipes for Cinco de Mayo most of the month of April. This year it's turning out that I'm all about the torta, which mixes both my love for making sandwiches on the grill with fresh and spicy Tex-Mex flavors, exemplified in these grill-pressed chorizo tortas. 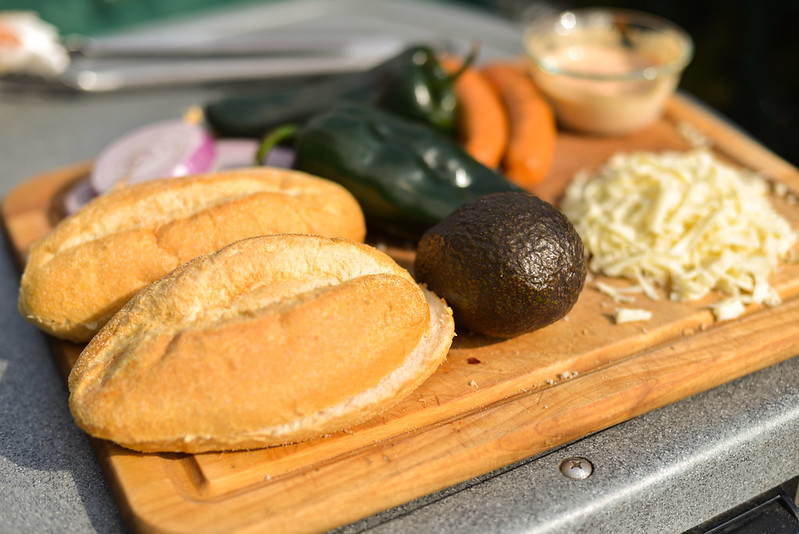 The torta is a great vessel to cram so many excellent Mexican flavors into. I kept thinking of more and more that I could pile on these sandwiches, but I had to find a balance between an over enthusiastic desire for everything, and those flavors that would actual build a good, balanced sandwich that would also make good use of the grill. This let to the final round-up of ingredients to include chorizo, onions, poblanos, Oaxacan cheese, avocado, and chipotle mayo. 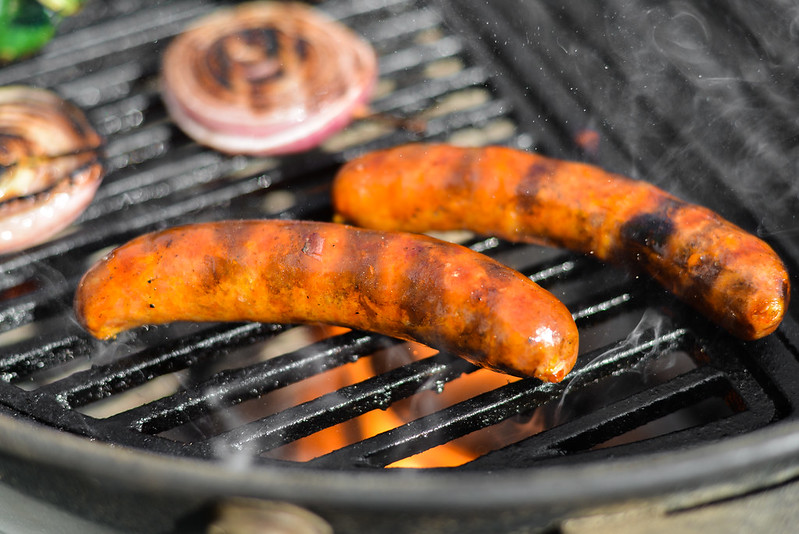 This torta started out by grilling a couple links of spicy Mexican chorizo. Some of the best chorizo I've had were the ones I made myself, where I was really able to push that earthy, peppery flavor with a ton of ancho chile powder and give some nice underlaying spice notes using cinnamon, cloves, and cumin. Unfortunately those sausages were long gone (homemade chorizo doesn't last long in my house), and I settled with some store-bought links that were already cooked, so they just needed to be heated and browned on the grill. They were fine in the end, but if you have the time, I'd really recommend trying your hand at making your own. 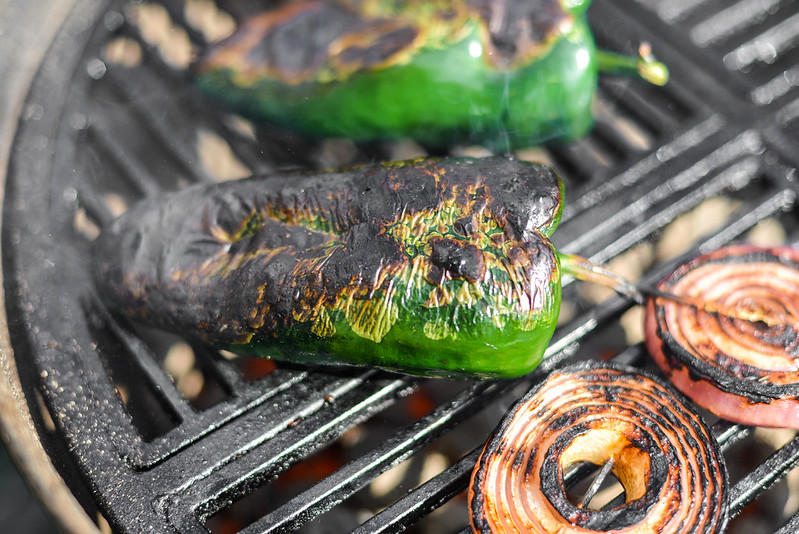 Next I grilled up a couple poblano peppers and onions. The poblanos cooked until they were softened and charred all over. They were then placed in a bowl, covered, let cool, and finally the charred skins were removed and the peppers were sliced into strips. The onions were cut into half inch rounds and skewered horizontally—this holds them together and makes for easier grilling—and put over the flames until slightly softened. Once done, they had a nice charred flavored, a little sweetness, but also retained a bit bite and crunch as well. 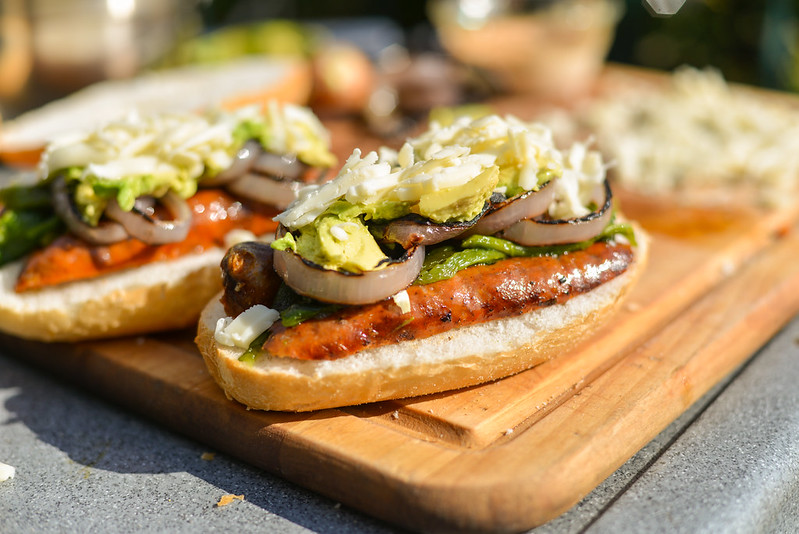 With all the ingredients grilled and prepped, it was time to build this sandwich. Each chorizo link was halved lengthwise and placed on a cheap imitation of the bolillo roll traditionally used for tortas. On top the sausage, the poblanos, onions, avocado, and shredded Oaxacan cheese were piled high. The top of the roll got a slather of chipotle mayo and the sandwich was ready for grill-pressing. 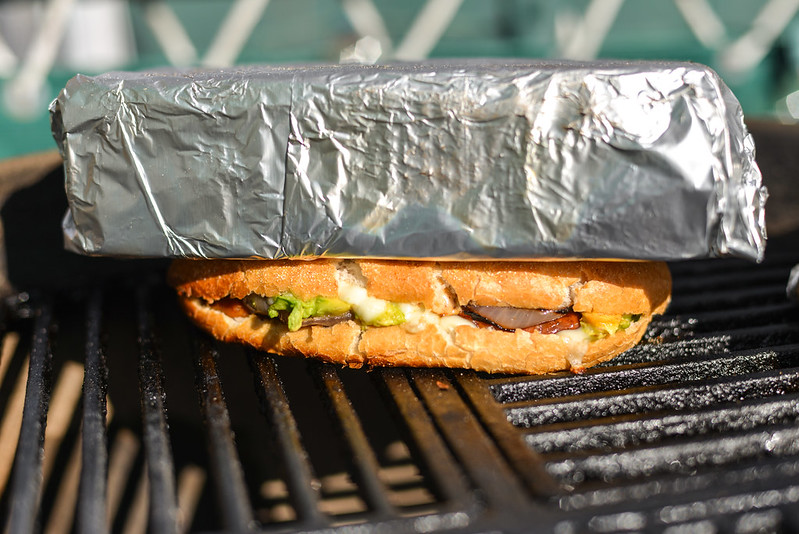 I've yet to invest in any type of formal grill-press, especially since a few bricks I grabbed my downstairs neighbor seem to do the trick every time. As I was building the sandwiches off the grill, I preheated my trusty bricks wrapped in foil directly over the fire. So once the tortas were ready for pressing, those bricks were nice and toasty. Placing the hot brick on top of the sandwich instantly compressed it down to a size more manageable to eating. The sandwiches then stayed on until the bread crisped, which took about five minutes, and left the tortas pressed down even more. 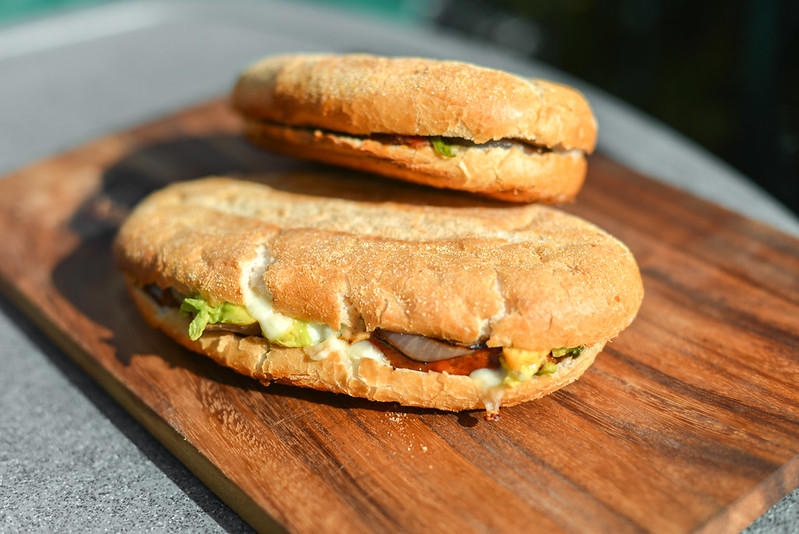 Since I'm a sucker for Mexican flavors, it's hard for me not to gush over these tortas. The spicy and earthy chorizo was the heaviest hitter in the lineup, but the avocado and cheese tempered the heat of the sausage and added creaminess at the same time. The poblanos lent a bit of fruitiness, while the onions gave both sweetness and little bite. The light and crisp bread encasing all this awesomeness was just the icing on the cake. Everything came together to exemplify how stellar the trio of sandwich, grill, and Tex-Mex can be.