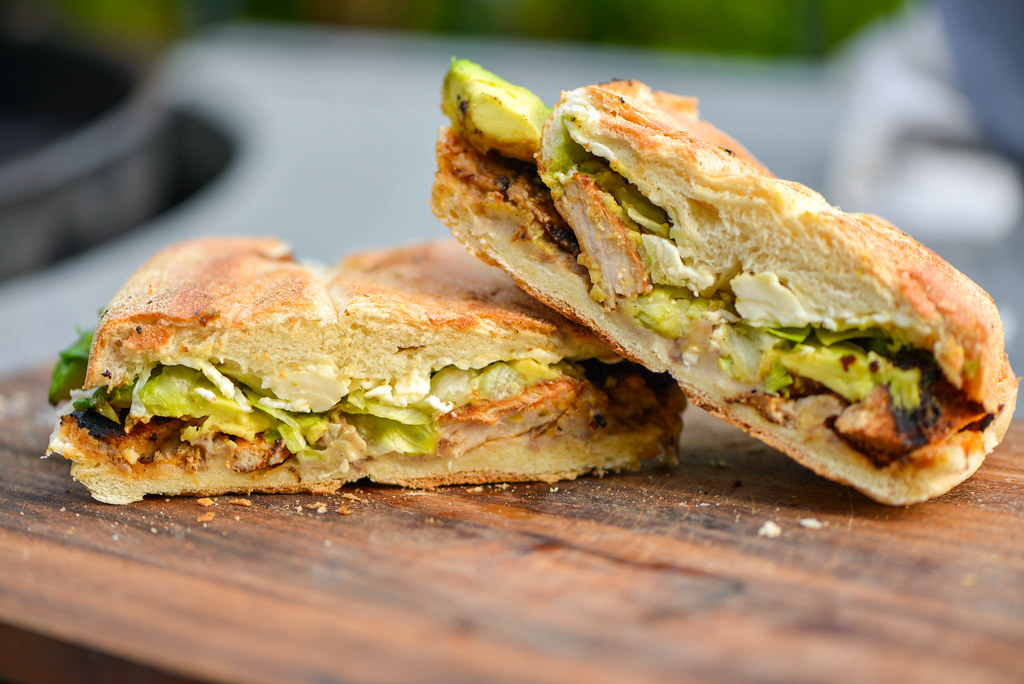 A while back, my buddy James invited me to help him eat through almost every torta at Tortas Neza in Corona, Queens for a video he was making. I had read odes to the overstuffed tortas made by Galdino Molinero out of his truck that resides under the elevated 7 train at the corner of Roosevelt and 111th, but never tried them, so was only too happy to oblige. There wasn't a low point in the 10 or so sandwiches we ate that day, but a few really haunted my dreams like Tortas Monarcas (carnitas) and Tortas Regias (carne enchilada). The later stuck with me due its profoundly spicy meat that was at the same time crisp and tender, having a saucy, caramelized, and charred exterior that coated slices of pork that were nice and juicy. It was something I wished I could have in my life more often, so attempted a version of it at my grill. 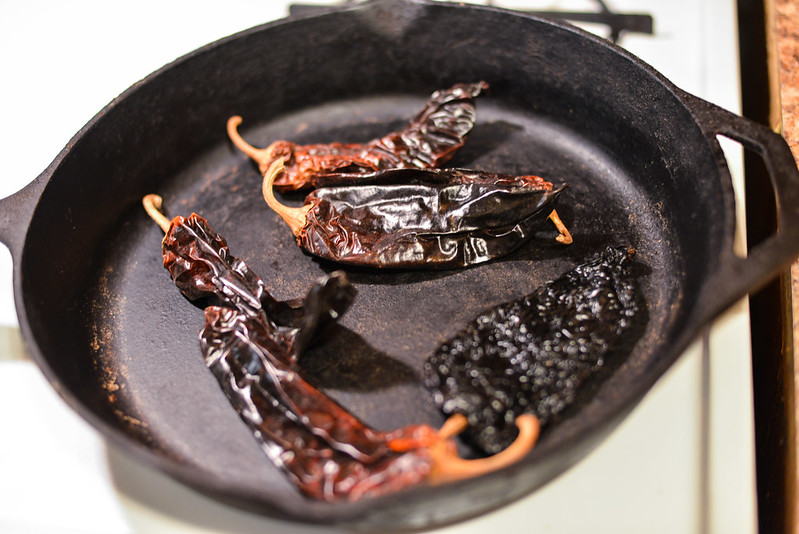 It wasn't just the fact that the pork was spicy, but it was such a complex mixture of chiles and other flavors that made it so damn good. To get me started on a path to that excellent carne enchilada, I took my previous experience with Mexican cooking and chose to use both medium hot and earthy guajillo chiles along with a sweeter and slightly smoky ancho. I toasted all of them all in a cast iron skillet to add complexity and reawaken their flavor. 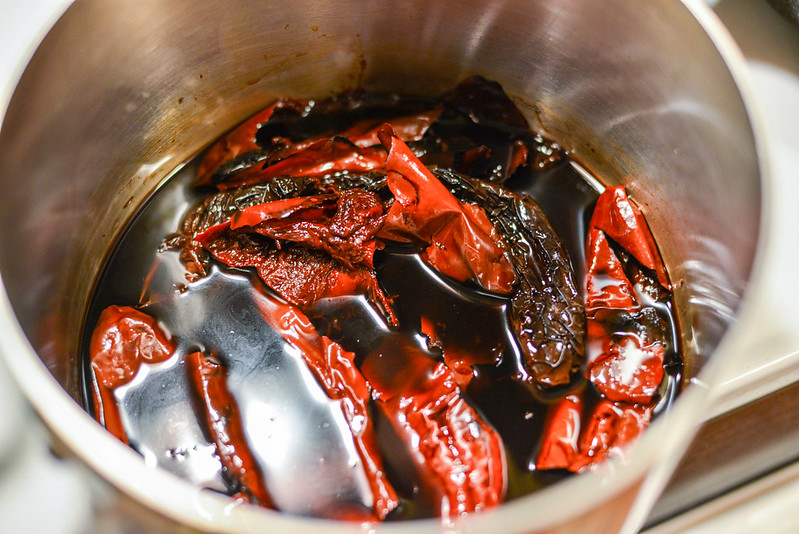 To soften them for pureeing into a sauce, I placed the chiles in a medium sauce pan and covered them with water. I brought the water to a boil, then backed it down to a simmer and let the chiles steep in the hot liquid until they were completely tender, which took about 15 minutes. 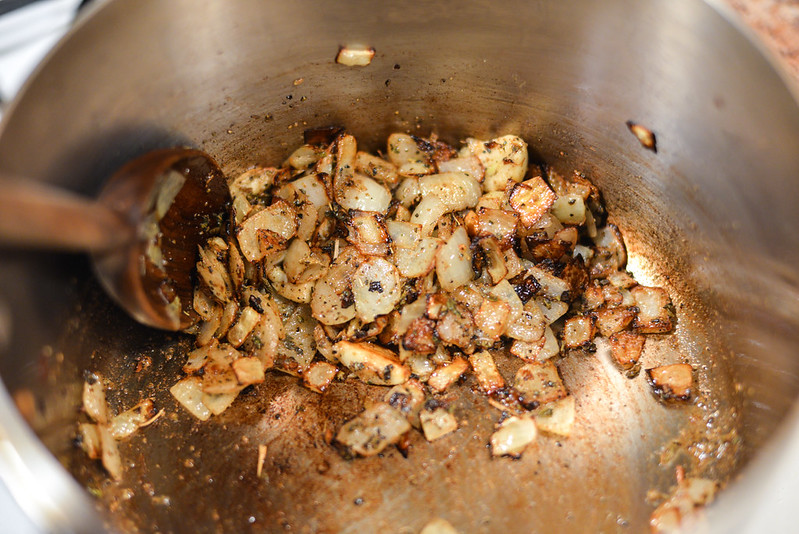 To further layer flavor into the sauce, I cooked a coarsely chopped white onion and few cloves of smashed garlic until both were well browned. I then added in ground cumin and cloves and continued to cook until those were fragrant. Once done, I transferred the mixture to a blender along with the chiles and 1/3 cup of the steeping liquid. 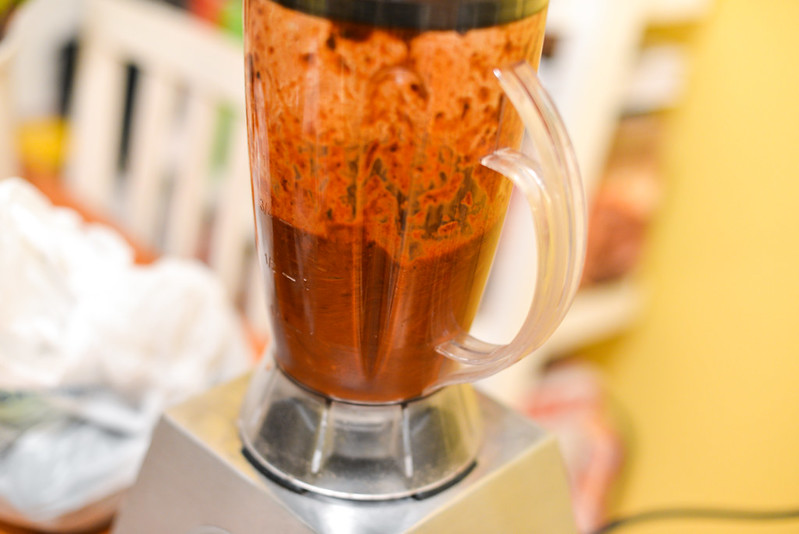 I felt I had enough to build a deeply earthy sauce, but had yet to really fulfill on the heat I was after. To fix that, I dropped a few smoky and fiery hot chipotles into the mix, plus some of the adobo sauce those peppers were packed in. Before giving the sauce a whirl, I also added cider vinegar, to bring a little tanginess to the party. With all the ingredients in place, I pureed the sauce until it was as smooth as it was going to get. 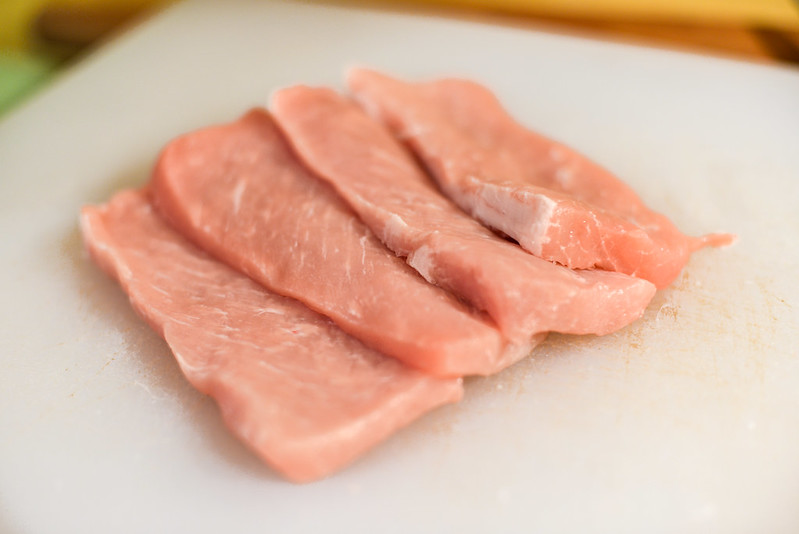 I was left a bit conflicted on which cut of pork to use for this. On one hand, I thought sliced pork shoulder would deliver the best flavor and juiciness, but with so much fat and connective tissue, it could also end up overly chewy and tough. On the other hand, there was pork loin, whose lean meat would avoid any toughness, but also leave it open to drying out and ultimately being somewhat flavorless. Since my sauce was so packed with flavor and I figured I could avoid over cooking the meat, I opted for the pork loin, which I cut into large quarter-inch strips. 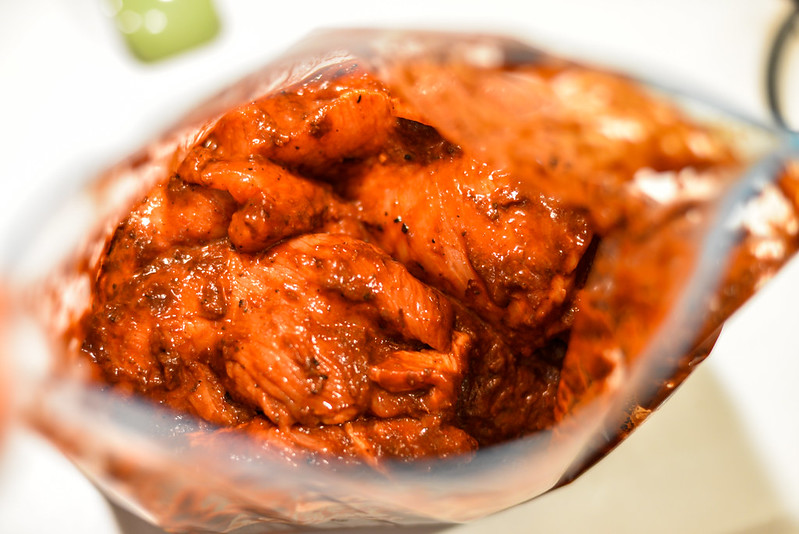 I transferred the slices of pork into a Ziploc bag, poured in the marinade, sealed the bag, and then place the whole thing in the fridge. Because the sauce was so potent and included an acid, it didn't need too long to do its work—just a couple hours was plenty of time, and I wouldn't push it more than about four to keep the vinegar from turning the meat mushy. 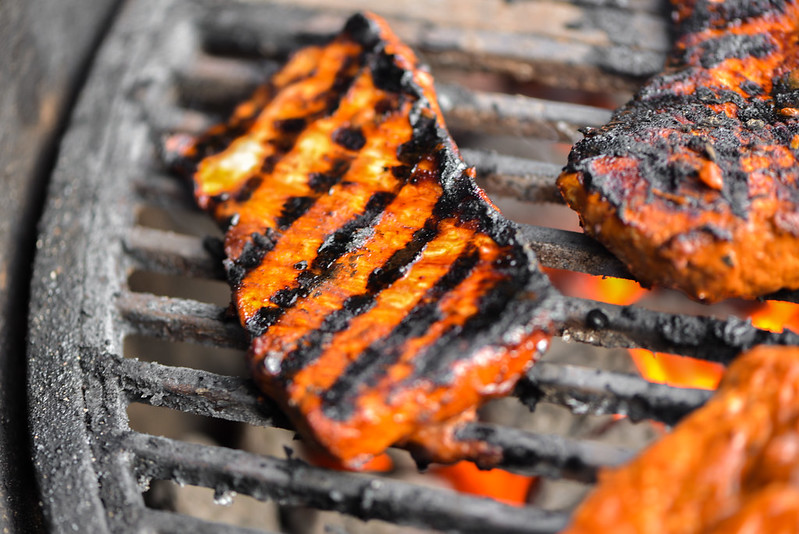 When it was time to grill, I pulled the slices of pork from the bag and the thick sauce clung in a hefty layer to the exterior. I hoped this meant the final product would have the same amount of sauciness as the torta I remembered so fondly, but that hope was dashed as the sauce cooked down quickly over the high heat of the coals. It was still a bright red hue, which left me thinking that a lot of flavor remained packed in there. 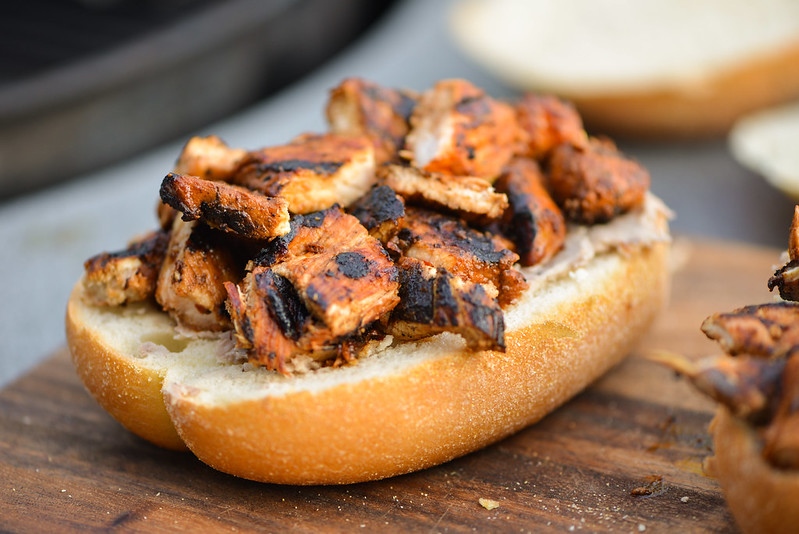 After resting the pork for a bit, I roughly chopped it up and piled it onto the rolls. I couldn't help but try a few bites, and while it was not the super spicy, super saucy end product I was shooting for, it was still damn tasty and all the work I did to build layers of earthiness, smokiness, and spiciness was accounted for. 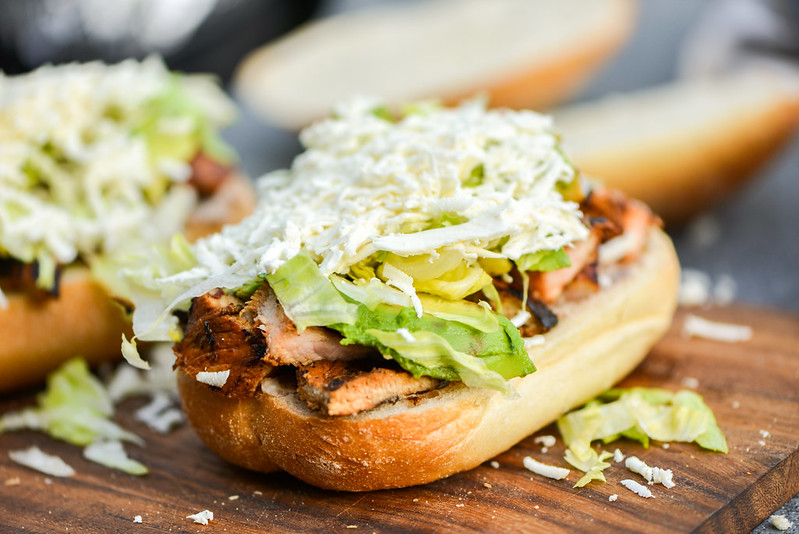 On top of the pork, I laid on a bed of chopped iceberg lettuce, slices of avocado, and grated stringy Oaxacan cheese. 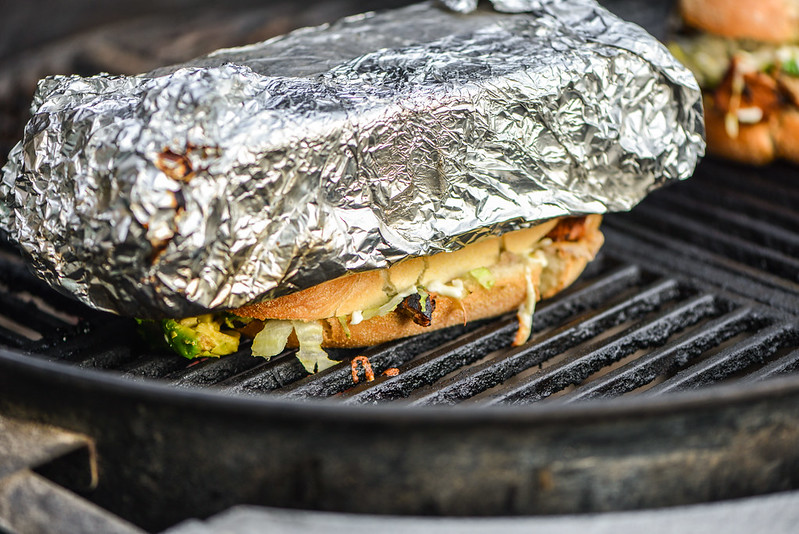 Once I had the assembly complete, I moved the tortas to the grill, where I had foil-wrapped bricks warming over the fire, waiting to do their job in pressing the sandwich. A torta doesn't have to be pressed, by my favorite ones have always been the sandwiches that go back on the griddle to develop a bread that's warm and crusty, which is what led me to giving them the grill-pressed treatment here. 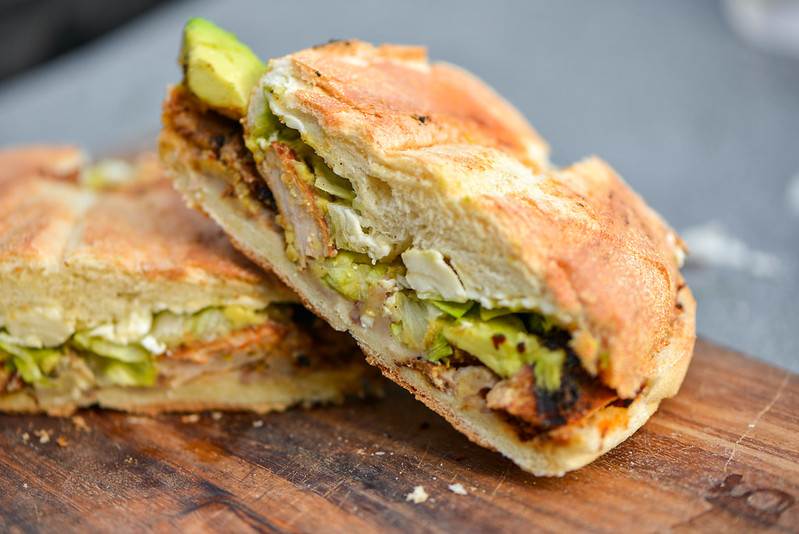 Although not quite what I was shooting for from the start, this torta was a great creation in its own right. I ultimately failed in delivering the heat—what spiciness remained was further dampened by the other toppings—but the meat was still well layered with flavor and tender. The Oaxacan cheese was a nice semi-salty addition, while the avocado delivered a smooth creaminess and the lettuce gave the sandwich crisp crunch. I have plans to work on my tortas this summer, and if making this one again, I'd likely add arbol chiles into the mix for more heat, and maybe slather a layer of refried beans or other sauce to enhance the moisture to make up for it being not as saucy as I original wanted. Even without those changes, I feel this recipe will serve you well in its current form, as all eaters who helped me down these four large tortas found no qualms with them. 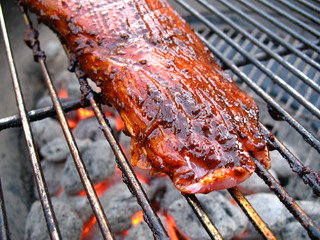