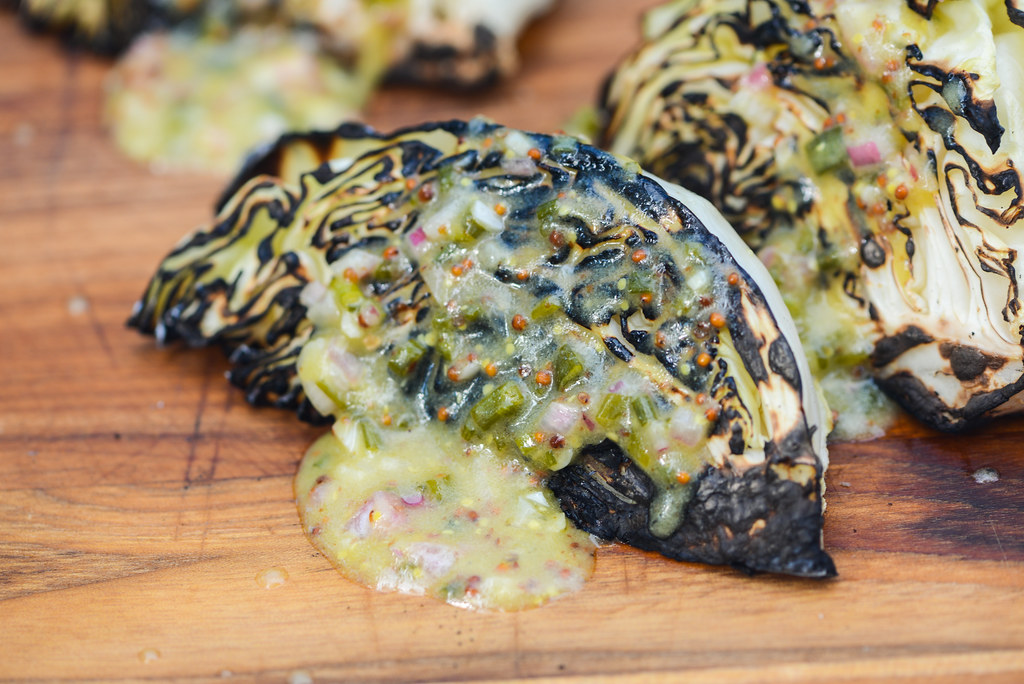 There was a time, not that far in the past, that I would have never thought I would be exalting the virtues of grilled cabbage, but here we are today. Not only is grilling cabbage one of the best ways to cook this vegetable, it's endlessly versatile, making it an easy choice to fit into just about any menu, and it's saved me on numerous occasions when I either couldn't think of an appropriate side or didn't have time to make something more elaborate. My last German-themed Meatwave is one such example—I had my prep time filled making sausages and other mains as well as was having a difficult time coming up with a fitting vegetarian side dish. I thought I was going to have to pull a cop out and just buy some bags of chips or pretzels, but then grilled cabbage creeped into my brain and saved the day. Quick to put together and dressed with a mustard vinaigrette, it fit seamlessly into the day. 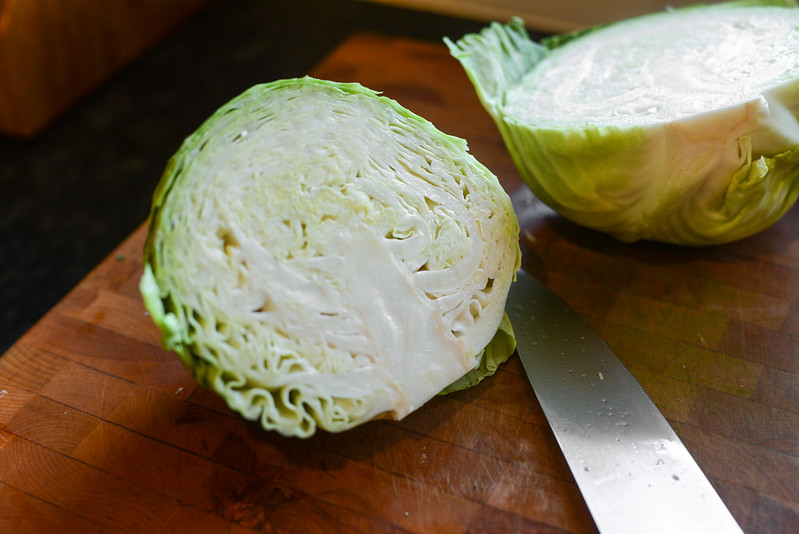 The real limiting factor in this recent scenario was time, and grilled cabbage can be a lifesaver when you're short on it. The prep is exceedingly simple and fast—it boils down to just slicing up a cabbage into wedges and making a sauce. 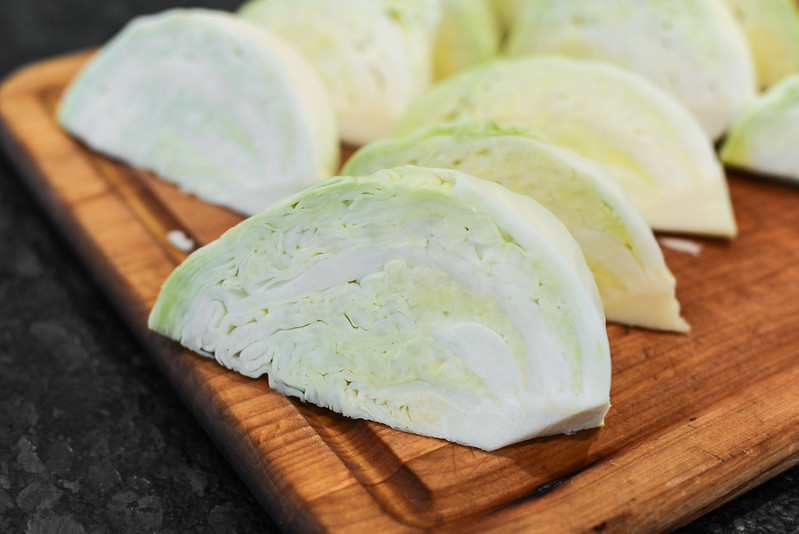 The only thing worthy of noting here is that for this particular application, you want to keep the core in tact. I know the core isn't necessarily edible, but without it, the leaves would separate on the grill and you'd be left with more of a mess than the delicious crisp-tender end result you want. 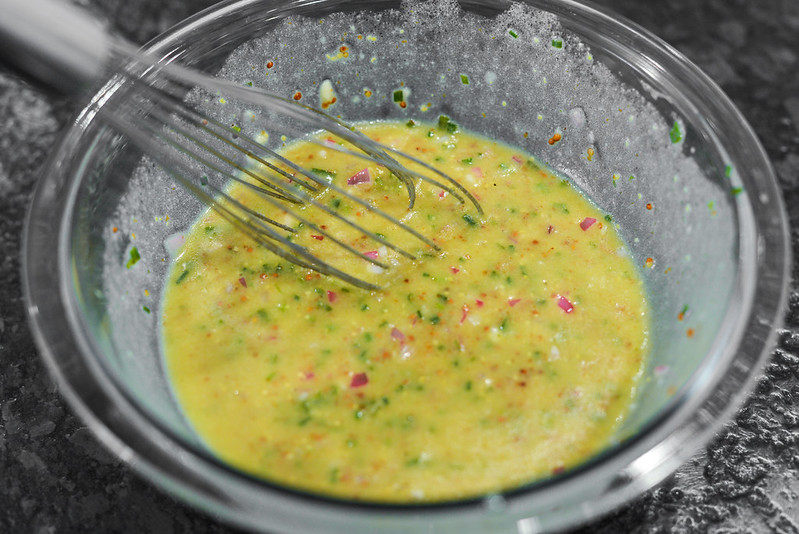 The reason grilled cabbage keeps coming up for me again and again is because it can really be flavored in any which way I like. I've already documented a version with a miso-ginger dressing and a chili-lime dressing, and both of those fit perfectly into their respective themed-menus. To make something that would go with the Oktoberfest vibe I had going on, I just looked at what ingredients were being included into other recipes for the day. Mustard and onions were the first to pop out, so I used those as starting point, opting specifically for Dijon and shallots here. I then upped the tang factor with Champagne vinegar and added some freshness with lemon juice chives, as well used a hearty amount of olive oil to make it more of a true dressing. With the few minutes of work it took to put it together, I had a really tasty sauce that I was sure was going to work wonderfully with the cabbage. 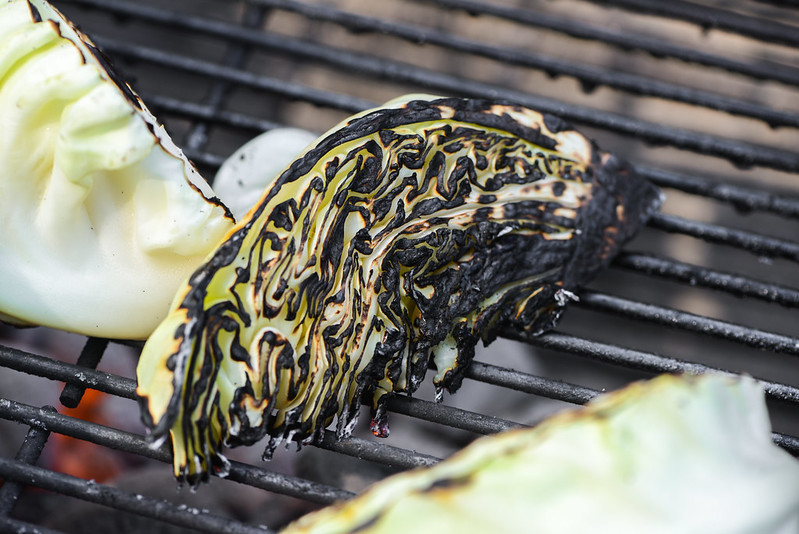 Grilling the cabbage is all about finding a balance between crisp and tender. The best part of the crisp factor are the charred edges, so I started the wedges over direct heat and grilled them until the edges were well browned and brittle. At this point, the majority of the cabbage was still pretty raw and tough, so get a little tenderness going, I move the wedges to indirect heat, covered, and cooked until they just started to soften up a bit. 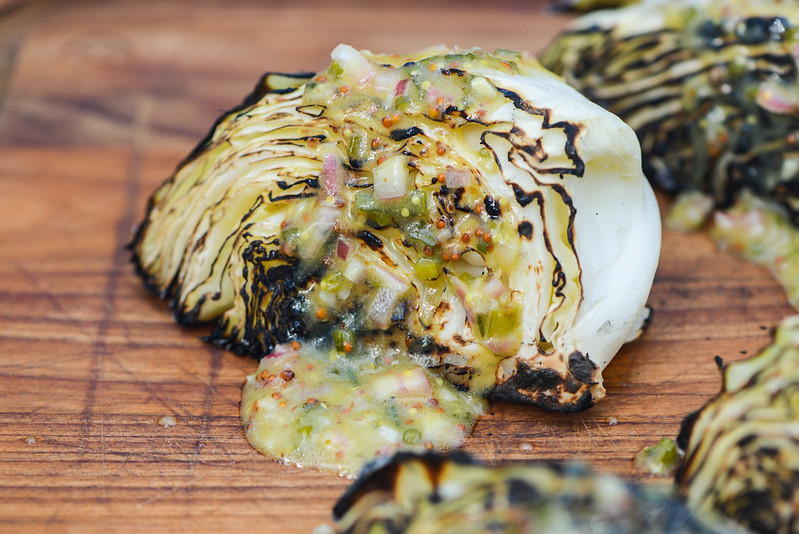 Then it was just a matter of plating and spooning on the dressing until it was serving time. The dressing gets a lot of credit in creating the flavor profile, but the cabbage itself started a strong foundation with a slight nuttiness that came out after being grilled. Those delicate, crunchy edges and crisp-tender insides brought great textural components that combined well with the immense flavor imparted from the tangy and lightly pungent dressing. There was also added sharpness by way of the shallots while the chives and lemon introduced a brightness the party. It definitely felt very apt in a day filled with wursts, smoked pork shanks, and grilled pork chops. And while this stood on its own as an excellent singular recipe, it's great knowing that all I need to do is apply a different dressing and this side can transform meld into any menu I want it to and continue to serve me well over and over again.