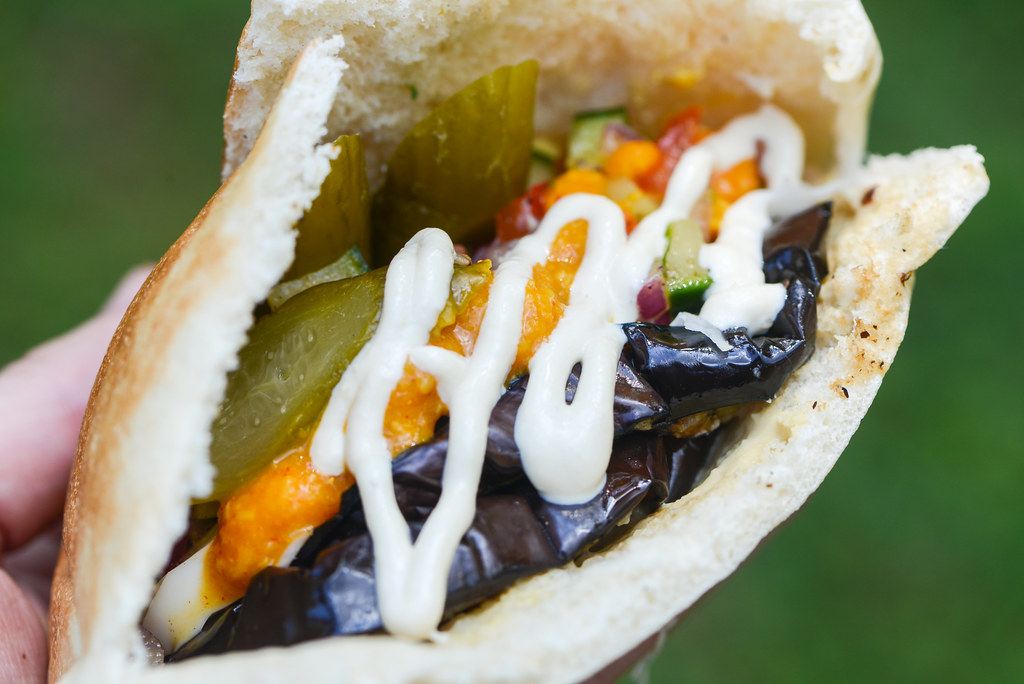 I have fond food memories from the semester I spent abroad in Israel, but back then I wasn't the eater I am today and didn't take full advantage of all of the incredible cuisine around me. While I was left with shawarmas, falafels, schnitzels, bourekas, and so much more to reminisce on, if I were to return today, I would certainly have a totally different eating experience. For one thing, I wasn't much of a consumer of vegetables then, and I would have steered cleared of something like sabich, which is a fried eggplant pita of Iraqi origin that's overstuffed with a myriad of toppings that I could have easily acquired in Tel Aviv. So today I'm left with hopes to one day try all that I failed to experience before, and doing my best in creating things at home based on other people's recipes and how I imagine they would taste. 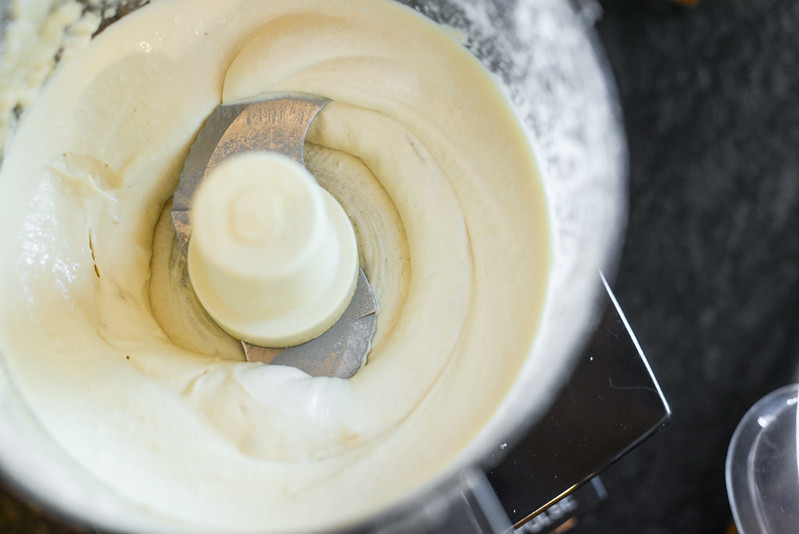 While eggplant serves as the central focus of sabich, it's the sum of the whole that really matters here—how that plethora of ingredients all come together. This recipe is primarily taken from what I read on Serious Eats, but has some of my own touches thrown in. One of those is the tahini sauce, which I have never been totally in love with until I made this version that's so incredibly bright and creamy and with a great roasted sesame flavor that's in the forefront, but not overpowering. 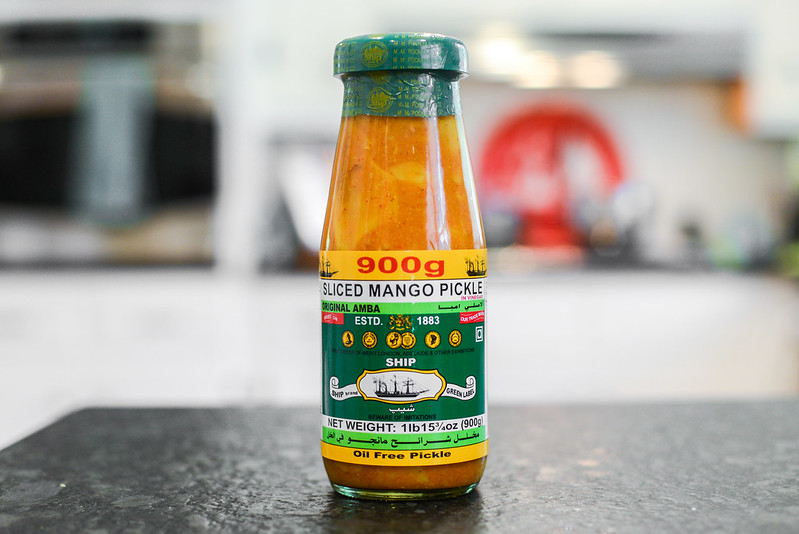 The next topping—amba—might be the hardest to procure, but it's worth the effort. Amba is a spicy pickled mango that's found in at least a few Middle Eastern countries, and in Israel it is commonly a sauce. I could not find the Israeli variety in my neighborhood, but the closest Middle Eastern market to me did have a couple versions of the sliced mango variety. To turn it into a sauce, I merely spooned some out into a blender and pureed until it was as smooth as it was going to get. 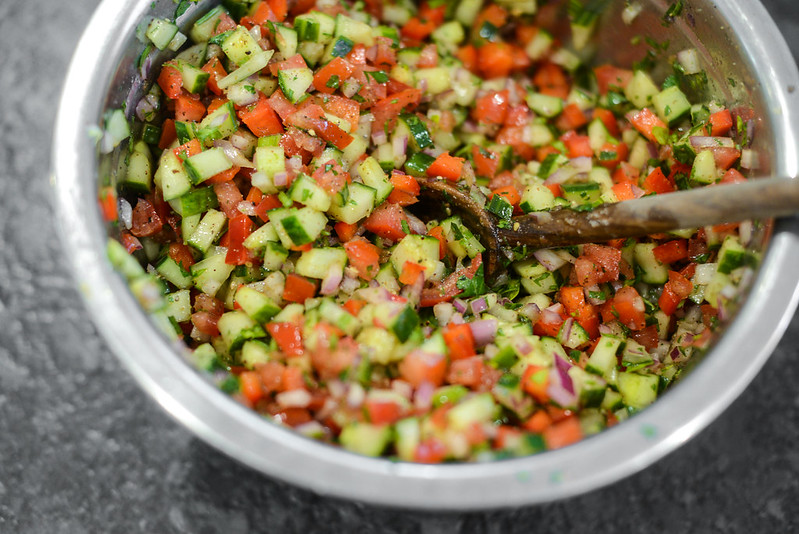 Israeli salad is something I've been serving alongside schnitzel for Friday night dinners for many, many years now, and my recipe hasn't really altered from when I first made it. It's hard to change something so simple—it's a mixture of diced cucumber, tomato, bell pepper, and red onion tossed with extra-virgin olive oil, lemon juice, za'atar, salt, and pepper. This stuff is equally great as a side dish or a topping for a variety of pita sandwiches. 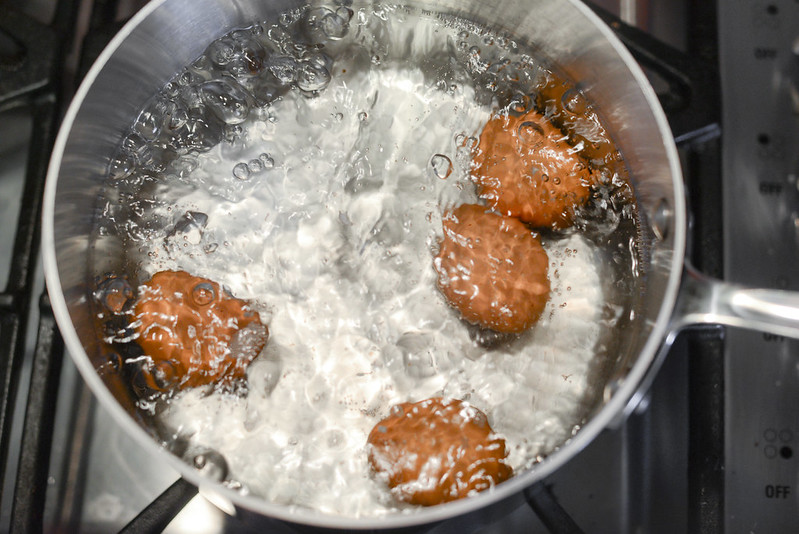 Hardboiled eggs also get a space in sabich, and I've found Kenji's method has left me with perfect eggs every time—never had any discoloration or overcooking at all. I start the eggs in boiling water and let them cook for 30 seconds before lowering the heat, covering, and simmering for another 11 minutes. I then place the eggs in an ice bath that stops the cooking and I think helps make peeling them a snap. Once peeled, I cut these particular eggs into slices to prep them for the sandwiches. 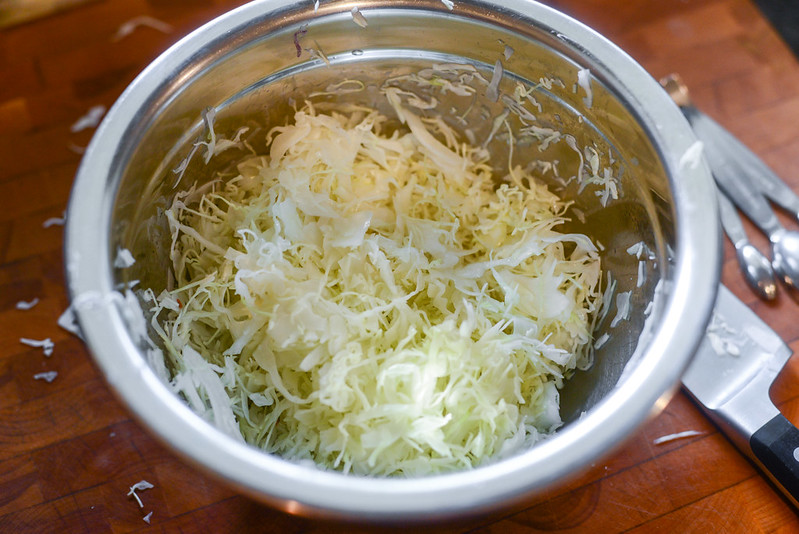 The original recipe also called for some seasoned cabbage, so I made that as well by first slicing cored green cabbage thinly on my mandoline. I then placed it in a bowl and dressed it white wine vinegar and salt to taste. 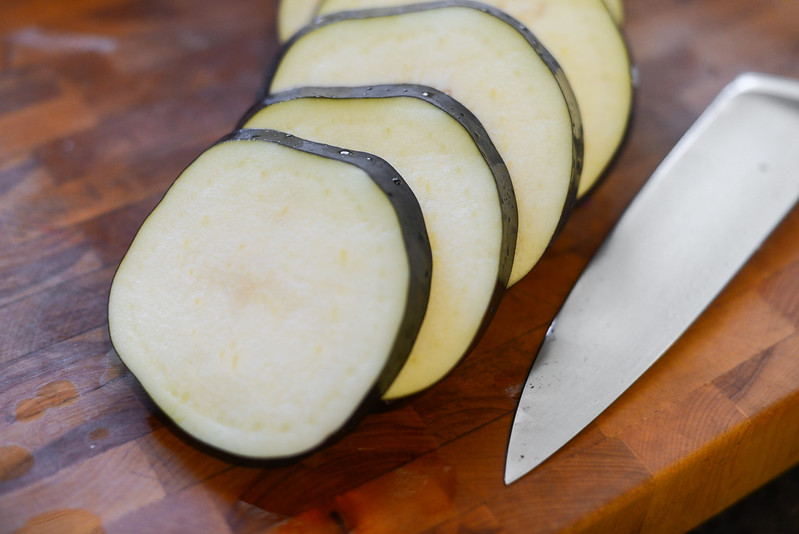 And finally we get to the star ingredient—the eggplant. A traditional sabich uses fried eggplant, which I assume is probably both a little crunchy as well as creamy. This is the Meatwave though, so I was set on grilling, and not frying. I've done a lot of eggplant recipes in the past and have found that with the extreme heat outputted by the grill, there's no real need to pre-salt to draw out moisture—the fire does that well on its own. The thickness of the slices does matter though since so much water is extracted from the eggplant that it dramatically reduces in size. Unless I want to end with super thin eggplant I can use for rolling, I usually like to start with slices about 1/2-inch thin. 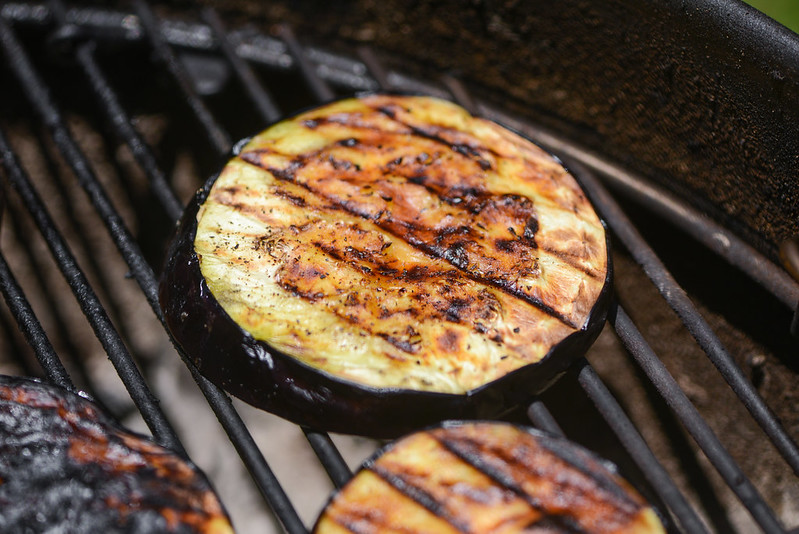 On the grill, the oiled and seasoned eggplant cooks pretty quickly. It can take only a few minutes per side for it to brown nicely and become very tender. It also can go from golden brown to burnt in no time, so I always try to keep a watchful eye and flip the eggplant often to ensure they don't become a dry, charred disappointment. 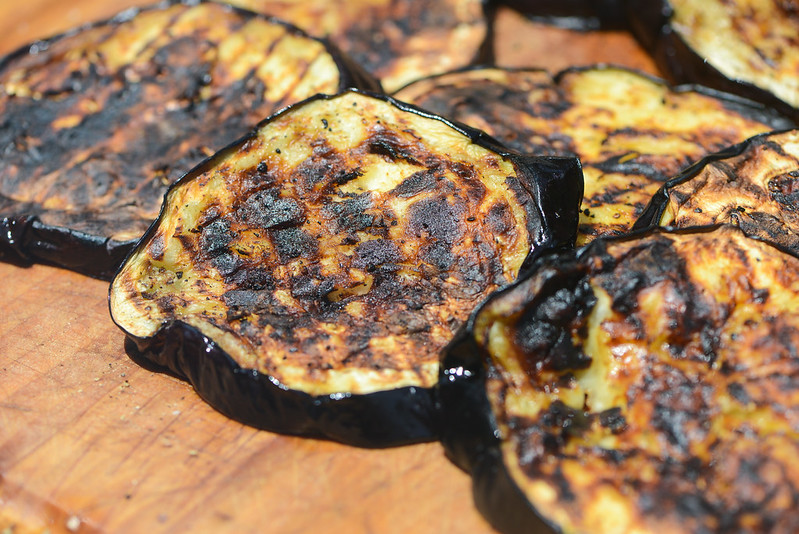 I'll pull them off the grill when they're almost completely soft, but not quite 100% yet. I find they'll continue to cook a little bit off the grill, softening completely. I'm looking for brown and tender eggplant that doesn't fall apart and isn't over mushy, like what I got in the photo above. 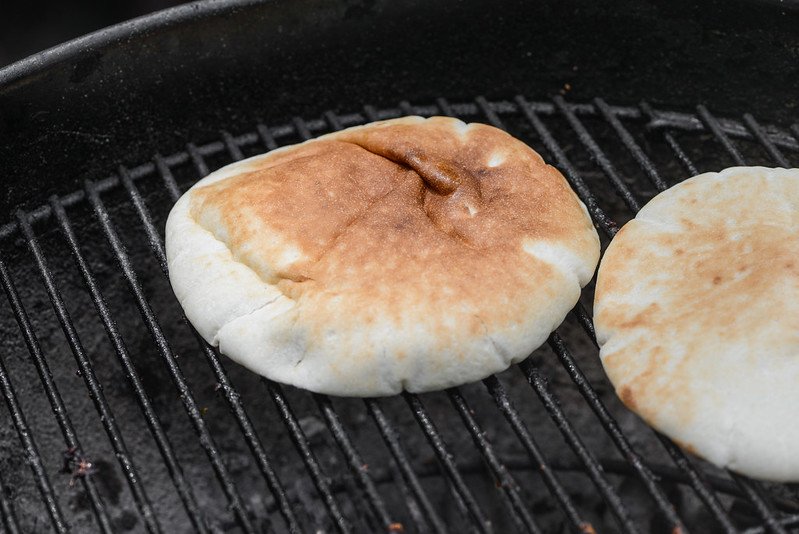 Once I had all the eggplant done, I utilized the still very hot fire to quickly toast the pita. A soft, pillowy pita can make all the difference between a good sandwich and excellent one, so this isn't a step I ever skip. 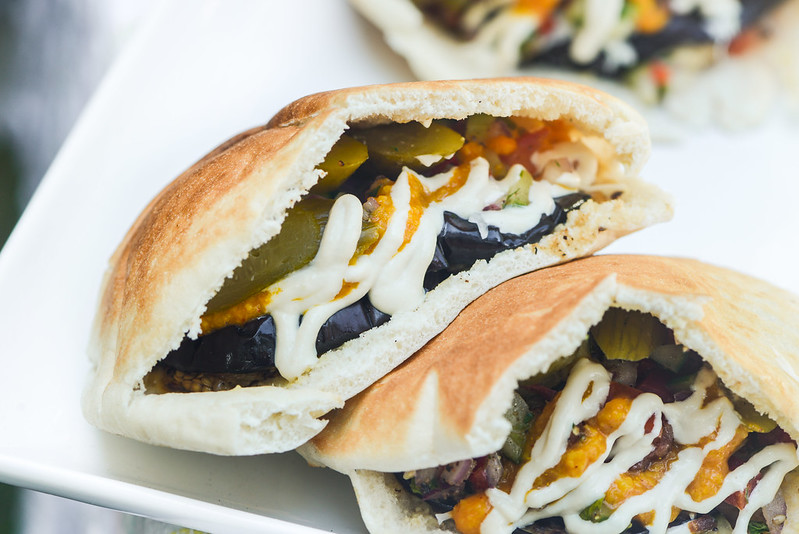 Finally, I had all the ingredients prepped and was able to build the final product by first spreading a line of hummus along one side of the warm pita. I then placed in a couple slices of the eggplant followed by slices of egg, Israeli salad, cabbage, and Mediterranean pickles. I then squeezed on both the amba and tahini sauces and served. I feel like it's hard to imagine how this all comes together until you've actually tried it. The creamy eggplant and hummus melded a bit and then was contrasted by the crunchy cabbage, salad, and the tang of the pickles. The eggs provided a heartiness while the amba added a spicy, fruity flavor I loved and the tahini lent a roasted and citrusy complexity. Even though I did all this work to make the sabich, I still can't say whether or not it's how it should actually taste, and the fact that I spent half a year in Israel and came home not knowing is something that will always bother me until I can return and really eat to my fullest. 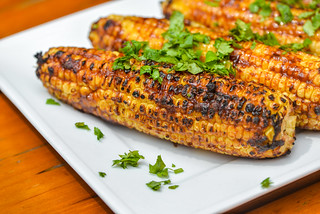