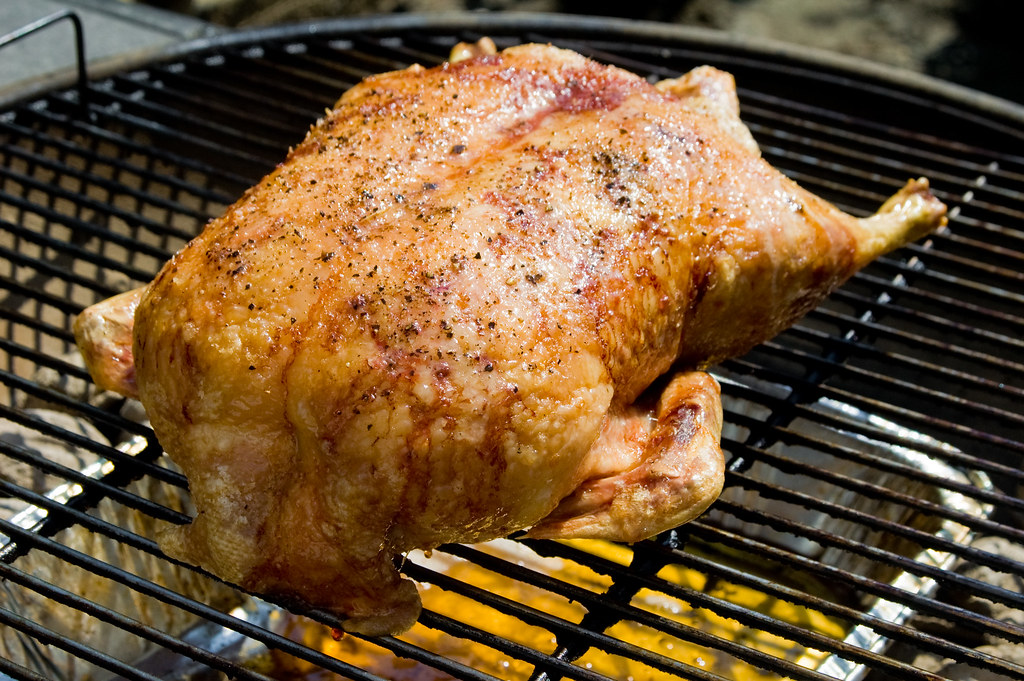 Off the Meaten Path was a fine idea conceptually, a way to get us to grill things we haven't grilled before, but as the days to the Meatwave approached, it was becoming clear I was going to have to make something that could be prepared in a couple hours, and my brain was totally stuck on thoughts of turkey legs, and turkey is nothing new to the Meatwave. I had smoked a whole turkey last year and even though I had never done just legs, I still felt as if my idea was a total cop-out. Foolishly, I did not consult any of my numerous cookbooks for other ideas, and took off for the grocery with only one half-assed idea of what to cook. At the store, I found the usual place reserved for turkey legs occupied by endless amounts of ground turkey, d'oh! Feeling defeated and down, I turned the corner and caught a quick glimpse of an uncommon site. Tucked away in the corner were 3 whole ducks, a favorite of mine that I had not even considered and was something I also had never made before. Both overjoyed by my discovery and felling utterly stupid for not thinking of it earlier, I grabbed a duck, checked out and read up on how to grill them at home. 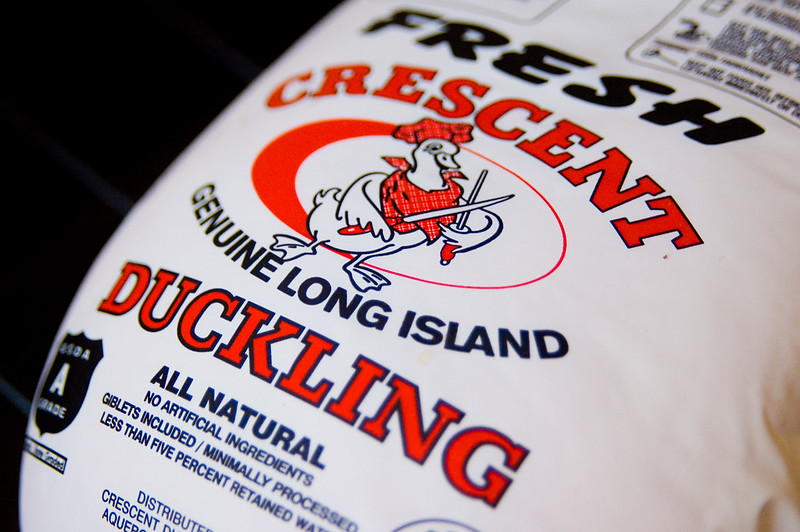 Having never purchased a duck before, I did not know any of the ins and outs of selection. I've actually only see ducks come already prepackaged, usually frozen, and often overly expensive. Finding them at my local grocery, not frozen, and at completely reasonable price made me consider that duck could be more than just one of those rare meals for special occasions. Duck is a favorite of mine to order at French or Asian restaurants, so why shouldn't it be something I cook regularly at home if the price is right? It wasn't until after I brought it home and I dove into my library of literature on duck preparation that I learned it is slightly trickier to cook than a chicken or turkey, although it should not really be out of my reach. 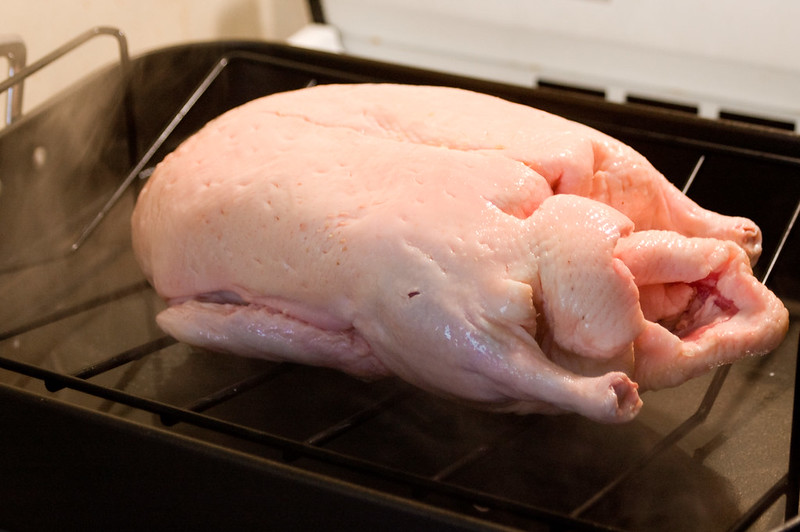 The tricky part I'm talking about is dealing with the fat. To love duck is to love the skin. There's little better in the world than a perfectly crispy, crackling piece of glazed duck skin. This is what I wanted, what I needed, to make my duck perfect, but the amount of fat that rests right under the skin is waiting to make this a difficult task. I read that the best way to deal with this was to remove as much fat as possible by steaming the duck before it goes to the grill. So I took out my roasting pan that I boast about getting for free during a Thanksgiving sale at Bed, Bath, and Beyond, and laid the duck in its v-rack. I then using a paring knife to poke holes all over the body of the duck, creating escaped routes for the fat. I then filled the pan with water to just below the bottom of the v-rack, set it over 2 burners, and brought the water to a boil. Once boiling, I covered the entire thing with aluminum foil, turned the heat down, and let it steam for 1/2 an hour. 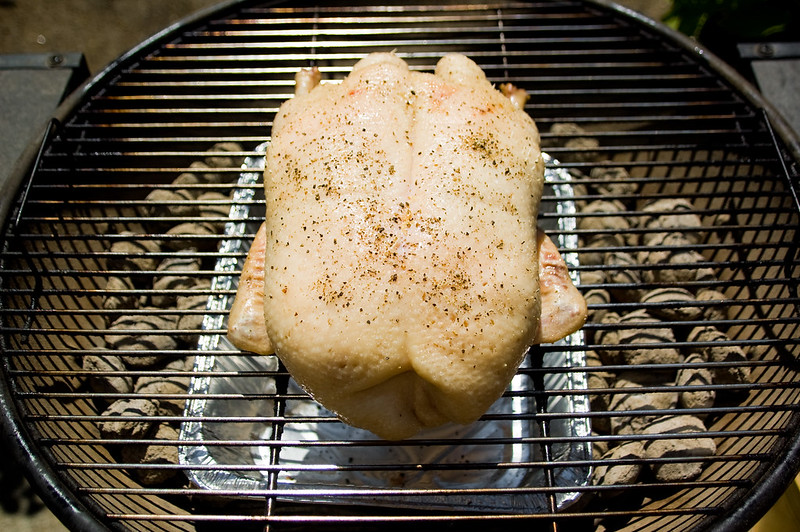 After the steam, there was so much fat in the water that I was positive this process was successful in removing enough fat to achieve a perfectly crisp skin on the grill. I set up the grill for indirect heat, with two piles of charcoal on either side of the charcoal grate with a drip pan in the middle to help prevent a grease fire caused by the dripping fat. Then I covered and let the grill do its magic for an hour. 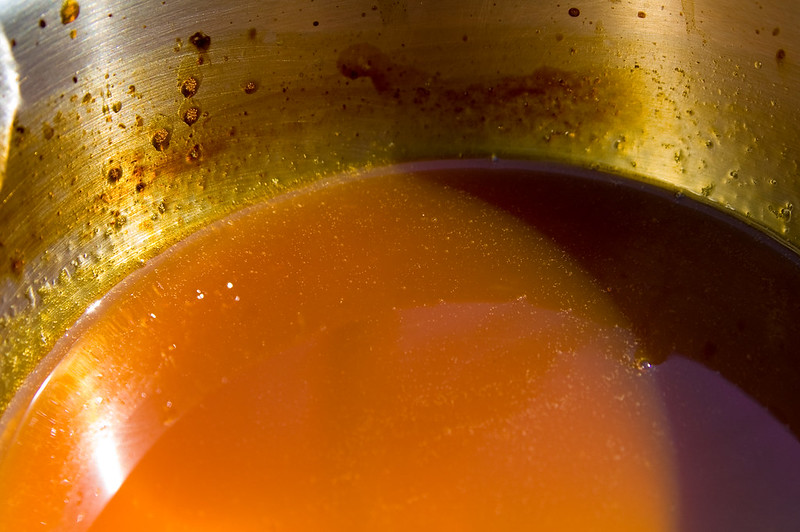 While the duck cooked, I assembled my glaze. I was torn between a Chinese style glaze or an orange one. In the end I decided that orange just felt more like summer and more appropriate, and went with that. I simmered down 1 cup of orange juice with two tablespoon of both lime juice and honey, until it thickened considerably into about 1/4 of a cup. 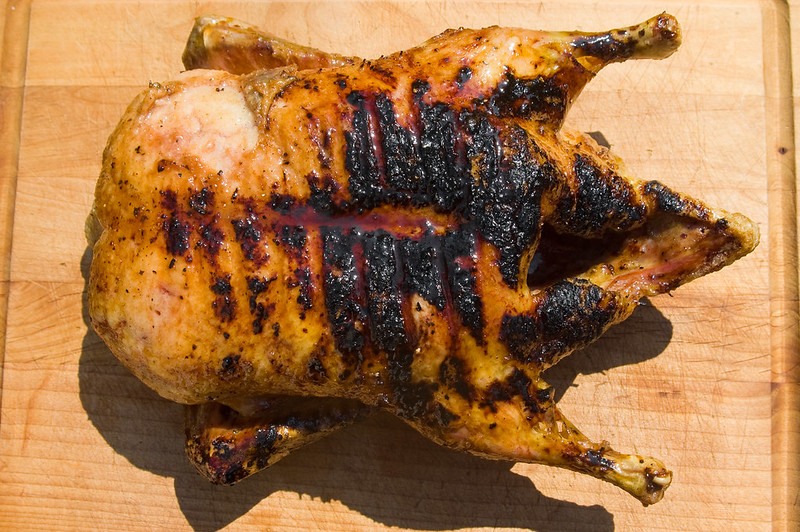 After an hour I was excited to lift the grill to find my perfect duck ready to glaze and then serve. What a blow to my spirits when I touched the breast to find a not soggy, but not crisp skin. There were areas of the duck that had the perfect skin I dreamed of, but that huge breast piece was not up to my standards. I immediately thought, "I know how to fix this!" Since the skin was not completely soft, enough fat must have rendered out to start the crisping action, I just needed to give it a boost. I figured if I put the breast meat over direct high heat for a few mins, the skin would crisp wonderfully. Coming up with one good idea doesn't mean I'm not still full of crap ones. Not thinking, I glazed the duck before I set in over the fire to crisp the skin, and it only took about thirty seconds over the high heat for the glaze to start to burn. I had to pull the duck off right away before it went from starting to burn, to just burnt, forfeiting my attempt to crisp the skin. 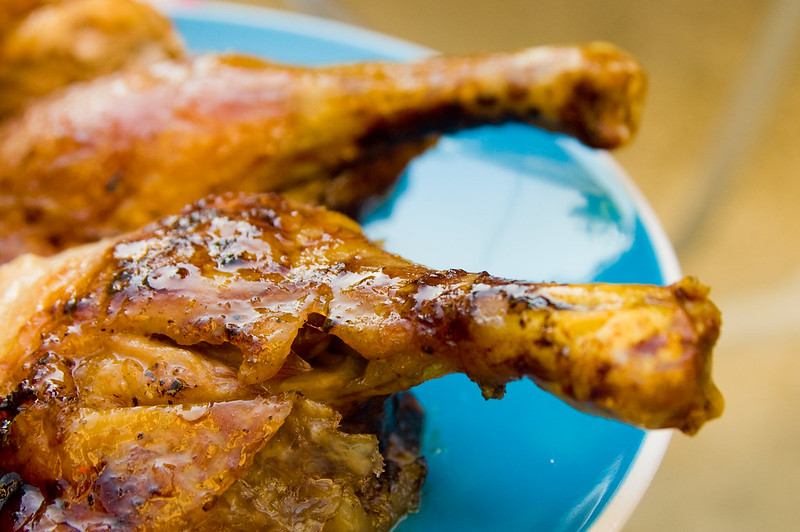 So I didn't get the perfect skin all around, but I'm still confident I would have succeeded if I had been so stupid and waited to glaze the duck after crisping the skin. This doesn't mean I didn't produce a delicious specimen. As I mentioned before, there were parts of the duck that I would deem perfect, one of those pieces being the legs, so that's the piece I choose to indulge in. Although eating it all together in one bite, the sweet crispy skin with juicy dark meat, was phenomenal, I still had to remove a large piece of skin to save to eat last, by itself (have I mentioned how much I love duck skin??!?!?!). Those who did take the breasts that had fallen below my standard only had rave reviews, although I suspect they were not true duck connoisseurs to rave about a piece of duck laking crackling skin. It turns out that a mixture of a delicious glaze and some perfectly grilled meat was enough to keep the masses happy, which in turn kept me satisfied enough.

Despite my error in cooking, I only closed the Meatwave with one very large regret, and that was not being careful enough to keep the ashes out of the large pan of duck fat I was left with, which I bet would have made some killer fries. I do find solace in that I have come to believe duck can be part of my regular home menu, which means there will be many more opportunities to crisp skin, make glazes, and harvest fat in my future.

From The Cook's Illustrated Guide To Grilling And Barbecue 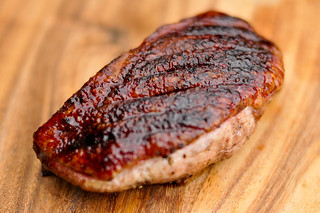 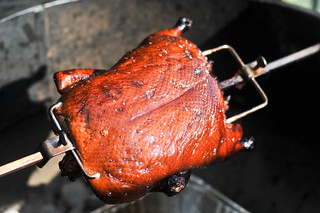