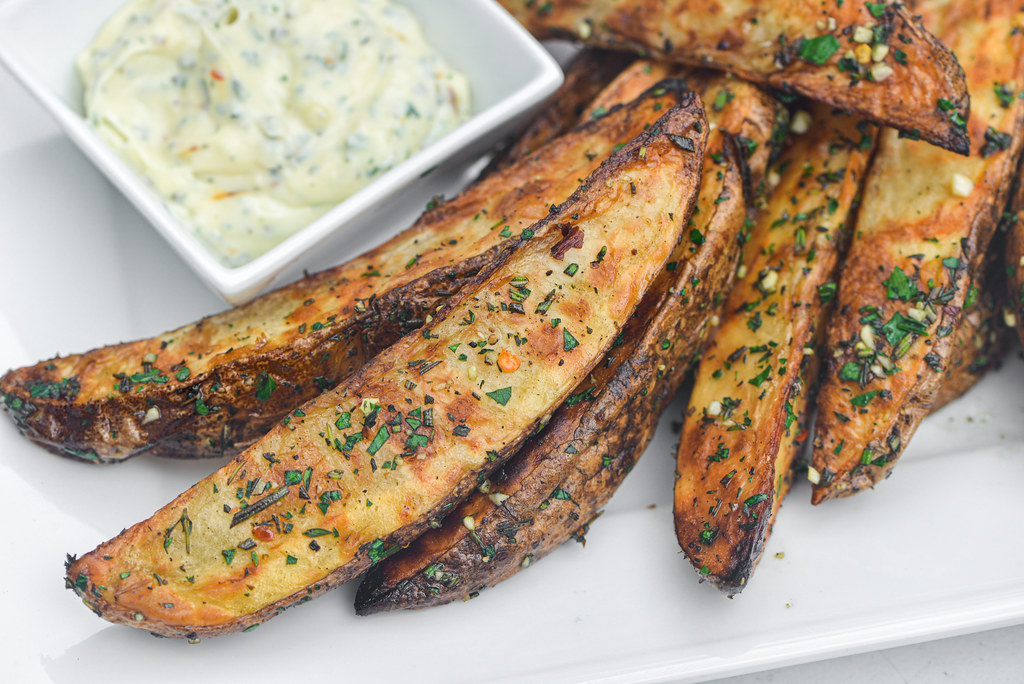 Potato wedges have long been a go-to side for me, with evidence by way of blog posts that range from standard to sweet potato to Old Bay-seasoned. As a griller of lots of meat, it makes sense that spuds come up pretty often as the pairing of choice, and when I was making some burgers recently, they once again rose to the top as exactly what I wanted to eat alongside fatty, flavorful beef. Having this blog though keeps me on my toes, always thinking of new ways to gussy up dishes to make them new and exciting. When making oven-roasted potatoes, or even french fries, a finishing of fresh herbs and garlic is fairly standard practice for me, so it kind of took me by surprise I had yet to give my grilled potato wedges the same treatment. Well, that has now been corrected with these delicious grilled garlic and herb potato wedges. 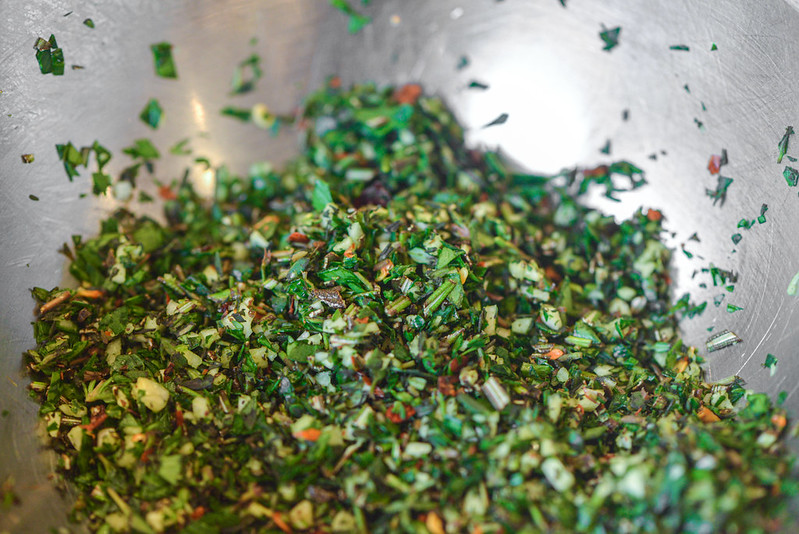 I like to use a mixture of herbs in these types of scenarios, and which herbs I use is often dictated by whatever I had on hand in the house. This time around though I was limited by the few herbs still left in stock at the grocery during the pandemic. They had thyme, parsley, and rosemary, so I got all three of those, and once home, chopped them up finely with the final mixture favoring thyme and parsley a little heavier than the more powerful rosemary. To the herbs I also added crushed red pepper and finely minced garlic. 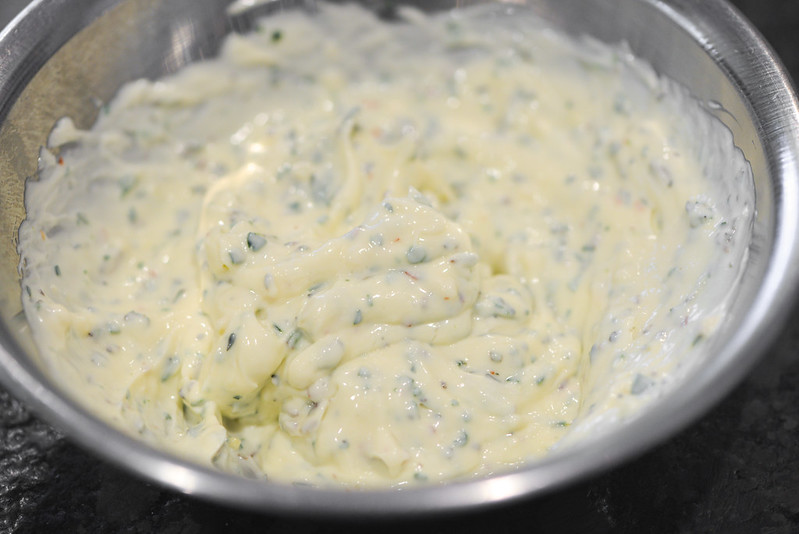 I also used the chopped garlic and herbs in a mayo intended for use on the burgers I was also grilling that day. I thought this mayo would be overkill with the potatoes due to the second helping of the same ingredients, but when I tried the two together, I actually really liked how they tasted together, so included the mayo as part of this recipe too. 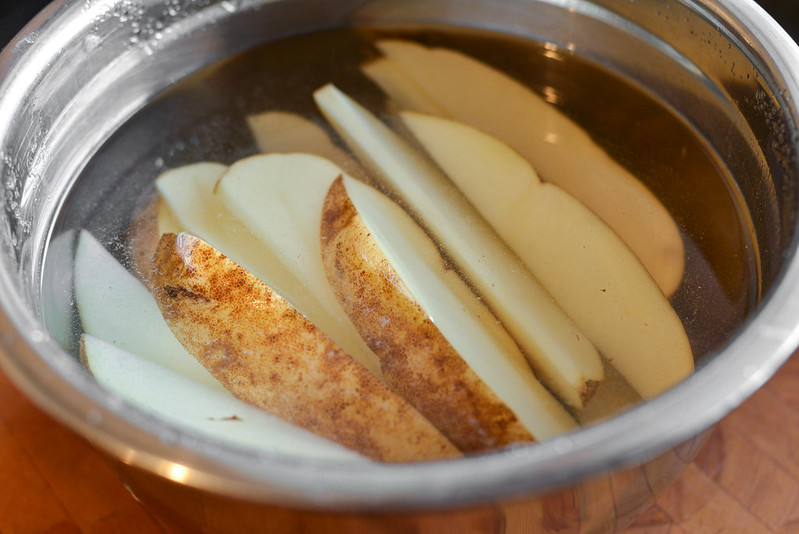 I used the standard russets for my wedges, which have always grilled up for me with creamy, soft innards that also have nicely browned exteriors. Since I like to prep things a bit in advance, I put my potatoes in water after I slice them to prevent them from browning, and it seems like the exterior starch removed in the water helps the potatoes get a little crispier top, so that added bonus led me to add rinsing the potatoes as part of the final recipe. 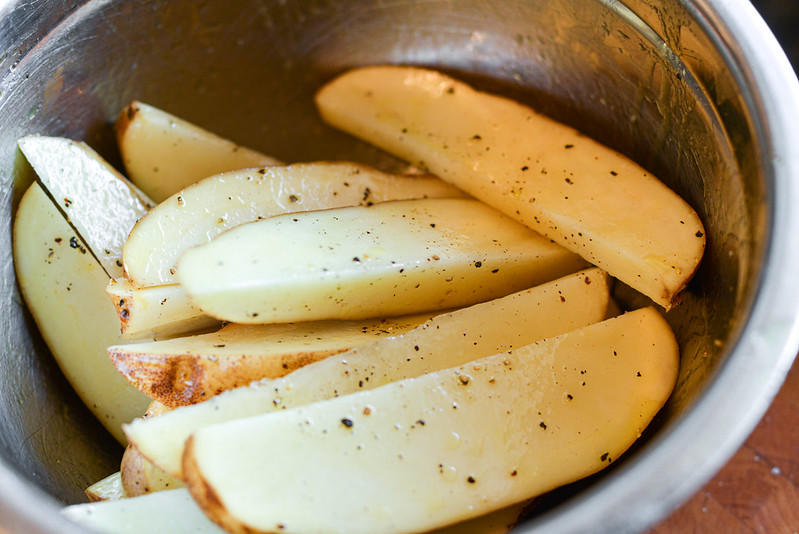 It was only after I had the charcoal all lit and the grill prepped for cooking that I drained the water away and tossed the potatoes with extra-virgin olive oil, salt, and pepper. The amount of oil used here may feel like a lot, but that's by design—there should be some oil left behind in the bowl which is used in the seasoning step after cooking. 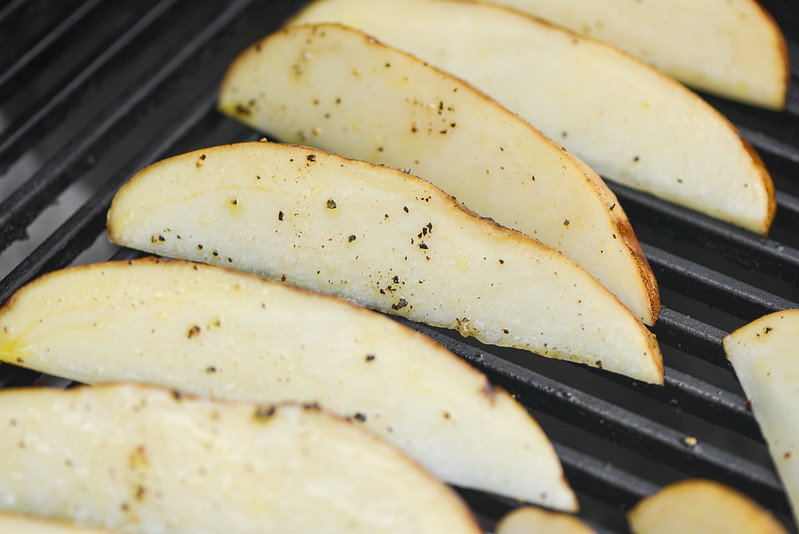 I start the potatoes on the cool side of a two-zone fire and try to place them close to, but not directly over the coals. I then cover the grill and let them roast. As they cook, I like to flip them and turn them about every seven to ten minutes so they cook and brown evenly. 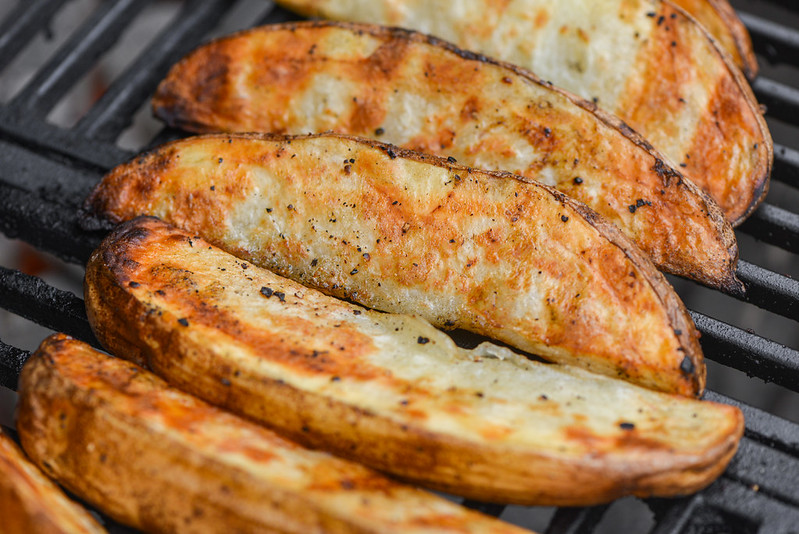 These russets took about 30 minutes until they were tender throughout, which I tested by interesting a paring into the thickest part of the biggest wedges and ensuring there was no resistance. Thanks to my flipping and turning, the potatoes were pretty well browned by the time they were finished, but for those that needed a little more color, I just moved them to the hot side of the grill and they darkened quickly. 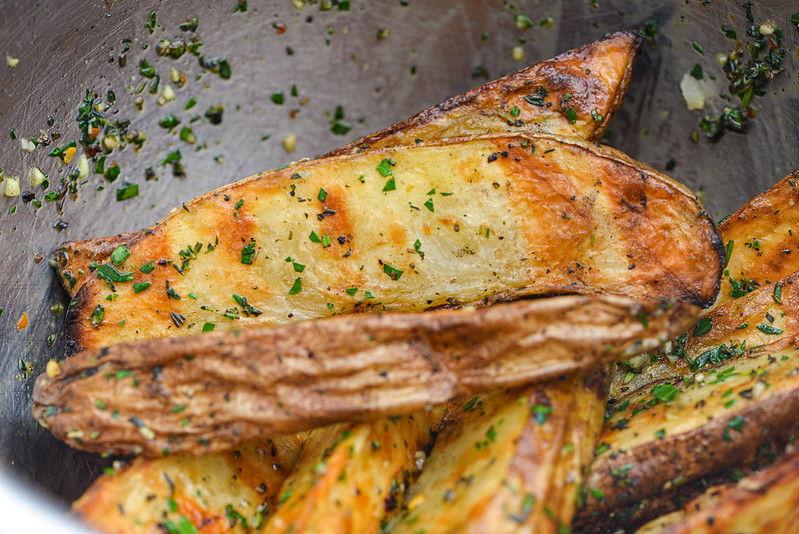 Now was when that extra oil in the bowl came into play—I transferred the finished potatoes back to the same bowl, added in the herb mixture, and tossed to coat. That reserved oil coated the wedges lightly, creating a way for the herbs to adhere well to the potatoes. The herbs and garlic became very fragrant during this step as they heated, which got my mouth watering. 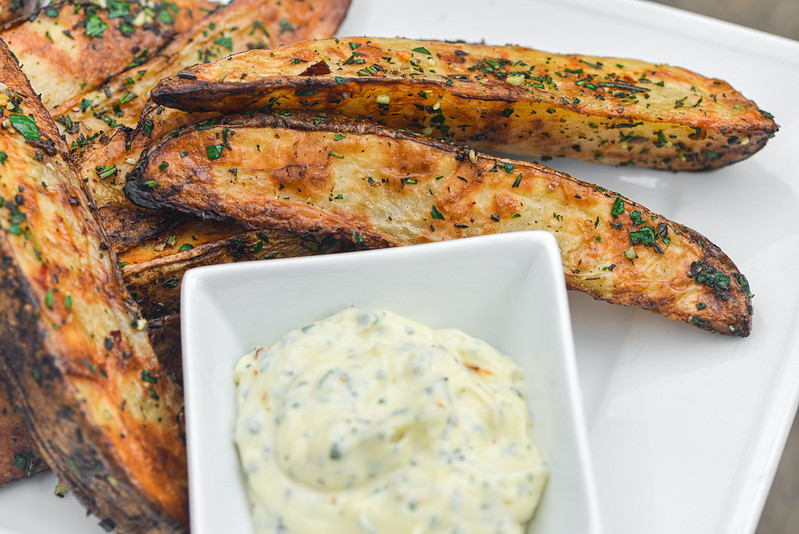 It's hard to think of a grilled meat these wedges wouldn't taste delicious next to. The herb mixture I used was on the lighter side, flavor-wise, but still gave a nice boost of freshness to the heavier spuds. The garlic and crushed red pepper both offered contrasting sharpness and heat that were nice touches. I think it was due to the herbs being pretty mellow that made the mayo work really well—enhancing their flavor and taking the herbal quality to next level while providing that rich, creamy, and tangy mayo compliment that's great with potatoes in general. This particular seasoning of potato wedges was especially apt for the mushroom Swiss burgers they were eaten alongside, but you'll have to wait until next week for that recipe...