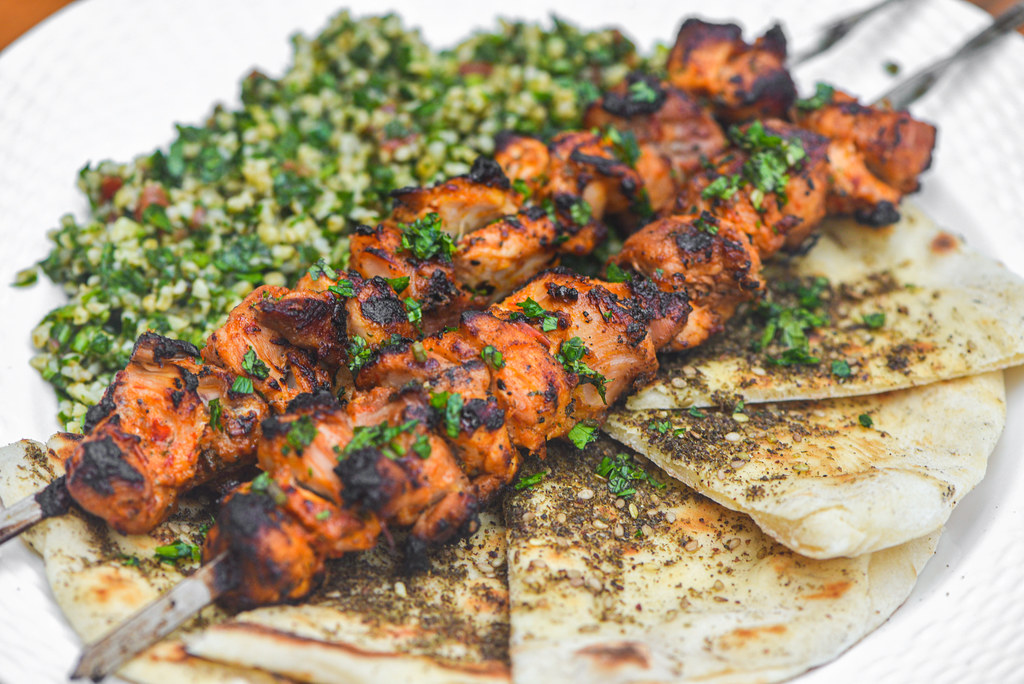 At the end of the summer, I had a real hankering for some za'atar bread. This grilled flatbread that's brushed with olive oil and topped with a generous portion of herbal and lemony za'atar is a favorite of mine, and while I won't lie and pretend I haven't had meals that were comprised solely of bread, I thought it would be best to make a more rounded dinner. With the grill already going, skewers felt like a good go-to pairing and I began perusing my recipe archive to see if anything would catch my eye and landed on Aleppo pepper chicken skewers I crafted last year. Those were undoubtedly tasty, but I remembered wishing they had a bit more heat and depth, so took that recipe as a starting point and wound up with these harissa-marinated chicken skewers that were a step up in a few key ways. 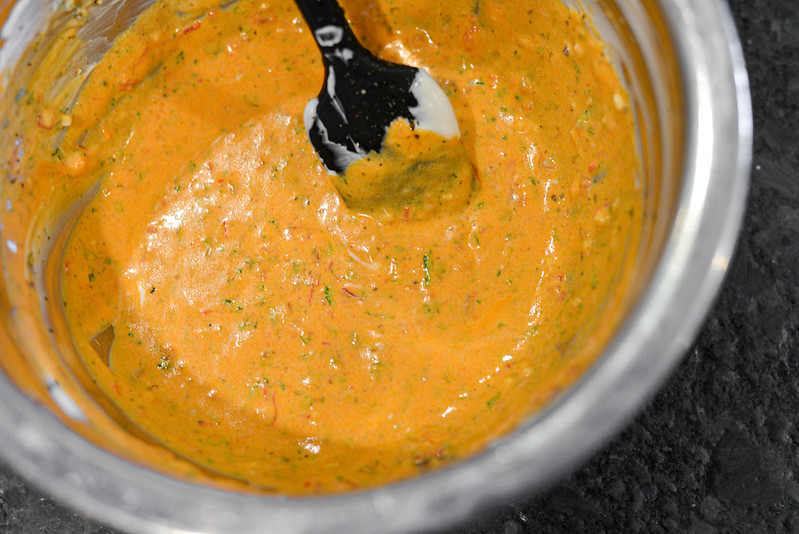 Unlike those Aleppo pepper skewers, where the olive oil served as a base, I began the marinade here with Greek yogurt. I've liked the tanginess yogurt has brought to past recipes and figured it was a good change up to build a more layered flavor profile. I then pulled a jar of spicy harissa paste out of the fridge and began adding it in one tablespoon at a time until the sauce had a good heat to it, pushing it a little further knowing that the spiciness would mellow out a bit after being cooked. From there I kept a lot of the ingredients that worked previously—mint, lemon, cumin, and garlic. Then with some salt and pepper, I had a marinade that I was pretty sure was going to deliver really tasty chicken. 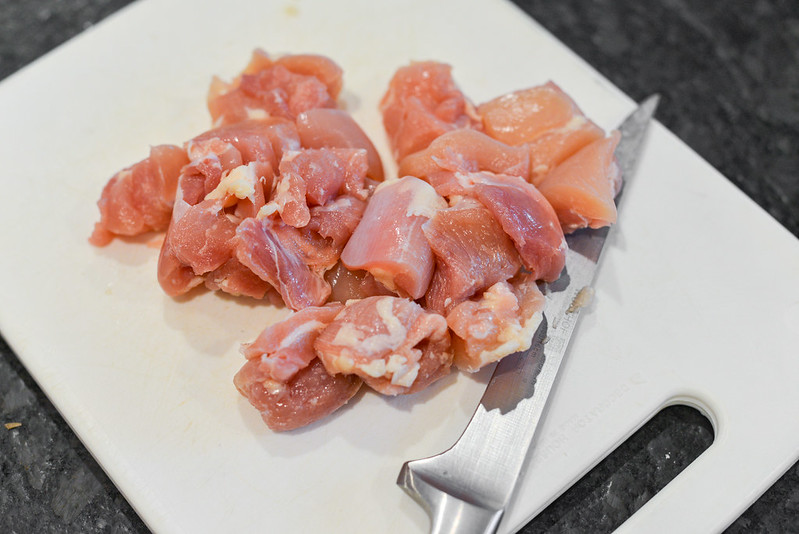 And for that chicken, I went with my standard chicken thighs, which provide the distinct advantages of having more flavor and are less prone to drying out when compared to chicken breasts. The one real plus to breast meat is that it can be cut into more uniform cubes. With thighs, I can get some proper cubes, but then when I hit thinner portions of meat, I cut the chicken into longer strips and will then fold those over when skewering to arrive at something more cube-like. 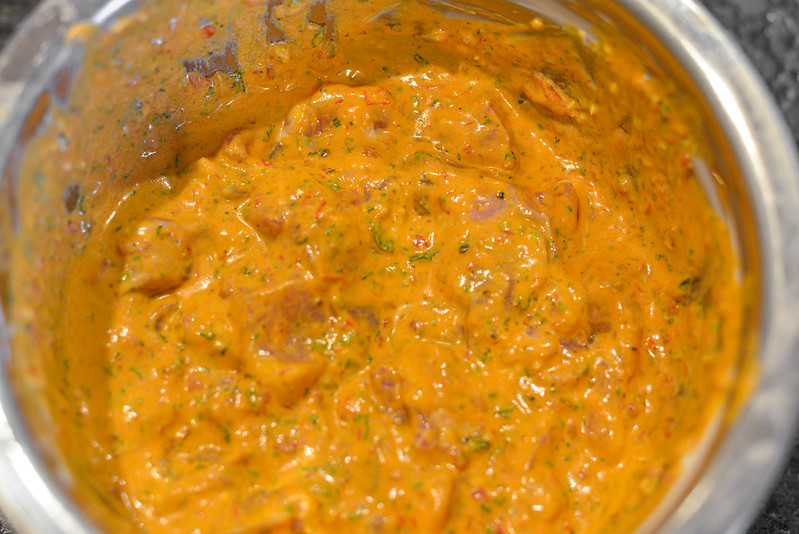 I have consistently always called for putting the meats and marinade in a Ziploc bag. A bag is nice for space saving, but I've been more in tune to the unneeded waste it produces and have switched to using reusable things for marinating and I think this may be the first recipe I'm actively changing to reflect my own habits. This has actually made the recipe a tad faster too because I make the marinade in a larger bowl and then add in the meat, cover, and place in the fridge—no extra step of transferring everything to another vessel. 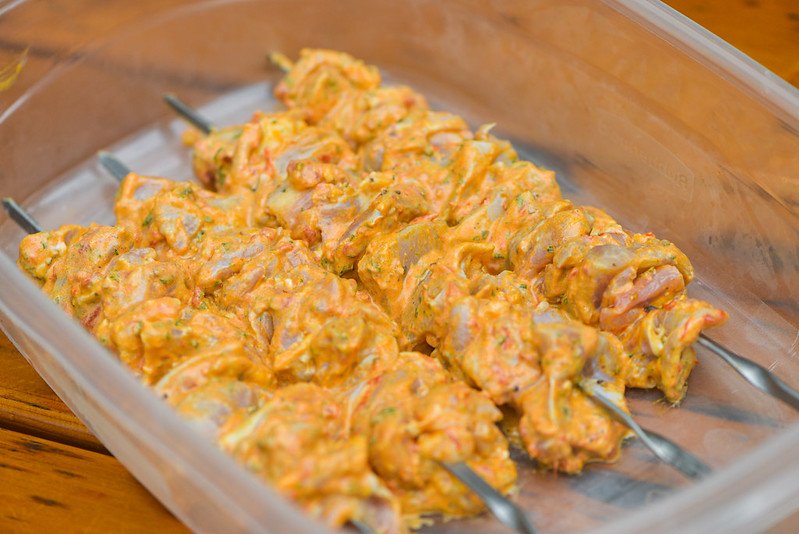 Without a high amount of acid in the marinade, I felt comfortable letting these soak overnight, but you could go with just four hours if you're looking to cook on the same day. In another point of less waste, I rarely use bamboo skewers anymore if I'm cooking smaller portions, instead opting for metal ones. I was resistant to this change for a long time, thinking the metal skewers would be a pain to constantly clean, but that's not the case and the extra width and sturdiness of my metal skewers have actually been advantageous, making it easier to handle on the grill. 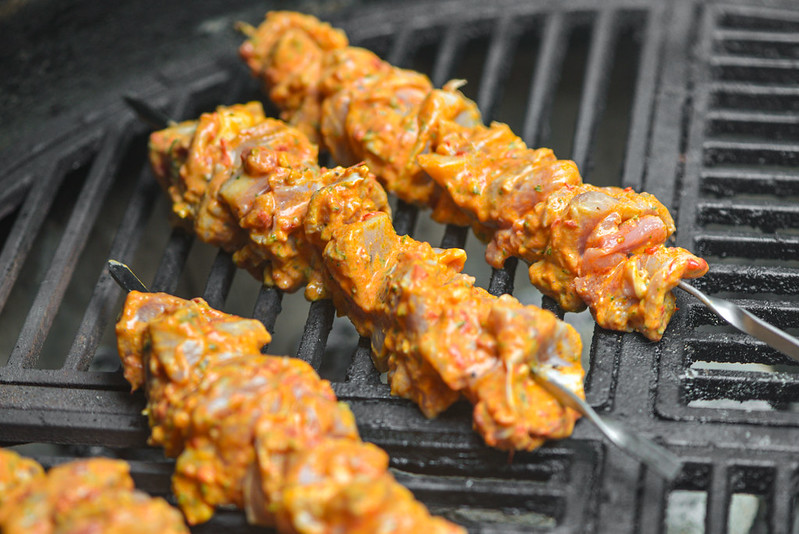 I jumped the gun a bit when I set these over direct heat to cook. I didn't wait for the charcoal to be 100% lit and the heat output at the beginning wasn't enough for them to sear properly, leading to some sticking to the grates. By about the halfway point of cooking though, the heat really picked up and the chicken began to brown nicely. 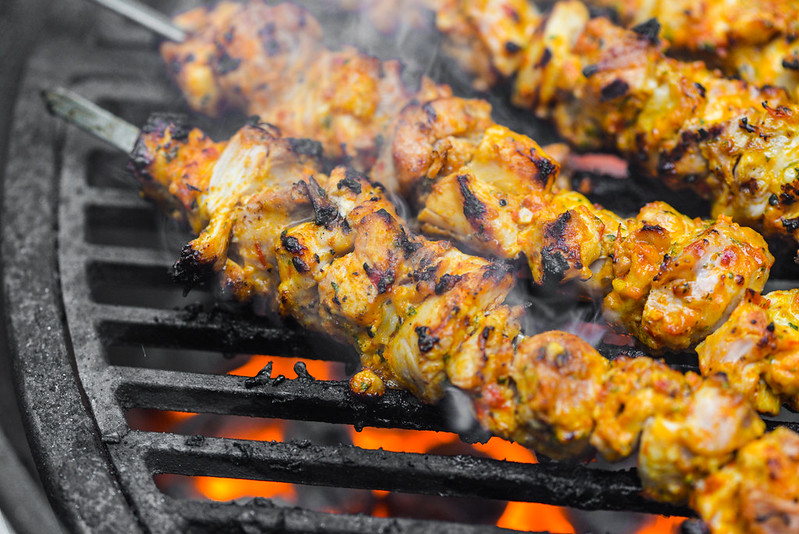 Because I used forgiving thigh meat, I didn't cook by temperature as I commonly do, but by looks. I wanted the chicken to be well browned and charred in spots, and I knew by the time I got that desired appearance all over, the meat would be fully cooked, most likely technically overcooked from the common 165°F target. But since thigh meat stays pretty juicy pushed past that mark, I felt confident all would be right in the end. 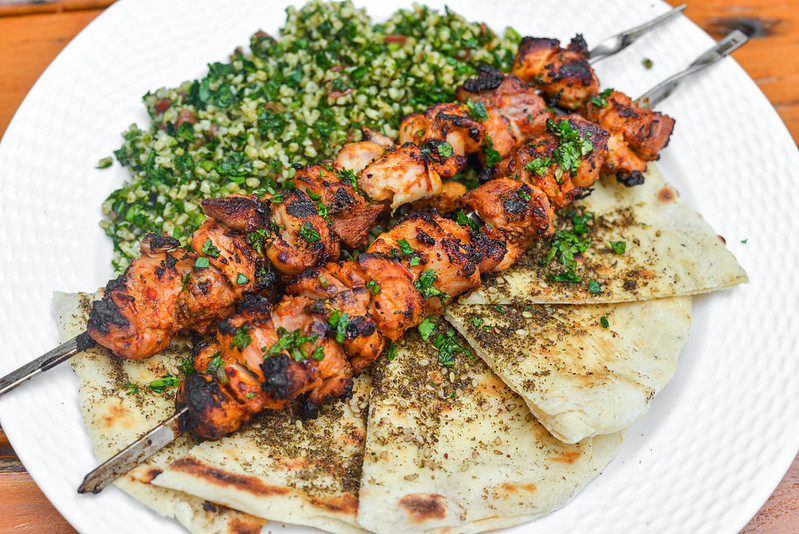 And it definitely was. I was kind of surprised with how these turned out, thinking they would be a minor improvement over those Aleppo pepper skewers, but I was digging these way more. For one, the heat factor was turned up, although I would still say it was on the mild side for anyone who likes spicy foods like myself. I think the real different was the use of the Greek yogurt, which added a tang and depth that actually felt more in sync with the other ingredients in the marinade than the inspirational recipe. Of course, this could also all have been a bias perception because I at these with some hot and fresh za'atar bread, and an equally excellent tabbouleh, two accompaniments that those other skewers didn't have and made this feel like a very complete, harmonious, and fulfilling meal overall.