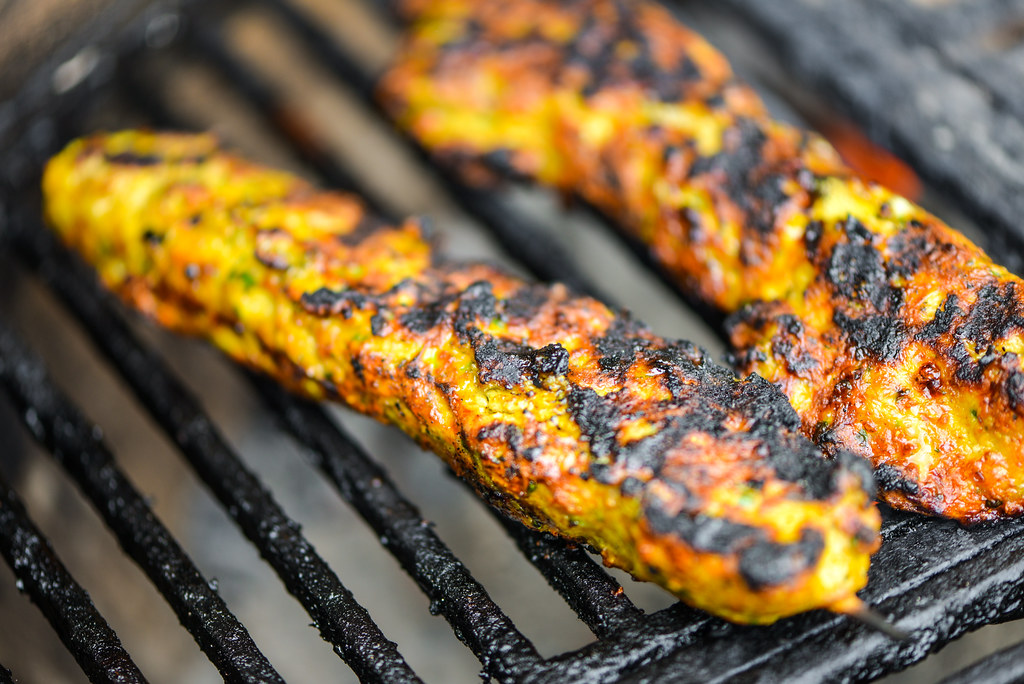 At the start of last summer, my buddy Tyson rolled into the Meatwave toting a bag of mustard-hued ground chicken spotted with green chilies and cilantro. He said it was chicken keema, procured from a Pakistani butcher who informed him not to waste time with the mild keema and to go straight to the spicy. It took some care to get that loose chicken formed around skewers and on the grill, but once there, they cooked up to be a beautiful vibrant yellow that drew the attention of many in the crowd.

I was eager to dig in and found myself instantly smitten with the supreme heat of this chicken mixture. That butcher wasn't messing around when he labeled his keema spicy—this stuff burned, but not so much that it masked the plethora of earthy spices also present, making it one complexly flavored skewer of meat.

I knew right away that I wanted to make my own keema recipe and I made good on that goal after spending time tinkered away with a barrage of spices and some damn hot chilies to get a keema Kebabs that lived up to that first taste many months earlier. 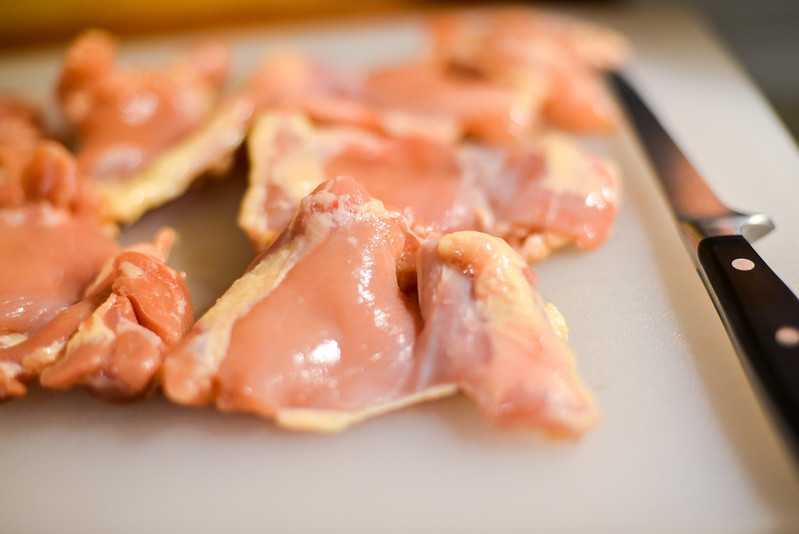 I considered trying out keema on other meats, but I think the use of chicken was one reason I was so attracted to it in the first place. Since chicken's flavor is so delicate, it really lets the spices, herbs, and chilies shine through.

As with most ground meat headed to the grill, I wanted a decent fat content in the chicken to ensure it remained moist during cooking. Plus, all that fat holds a lot of the flavor. For fatty chicken, I always turn to the thigh, which isn't totally loaded with it, but certainly has more compared to the lean breast, and is much easier to work with than legs. 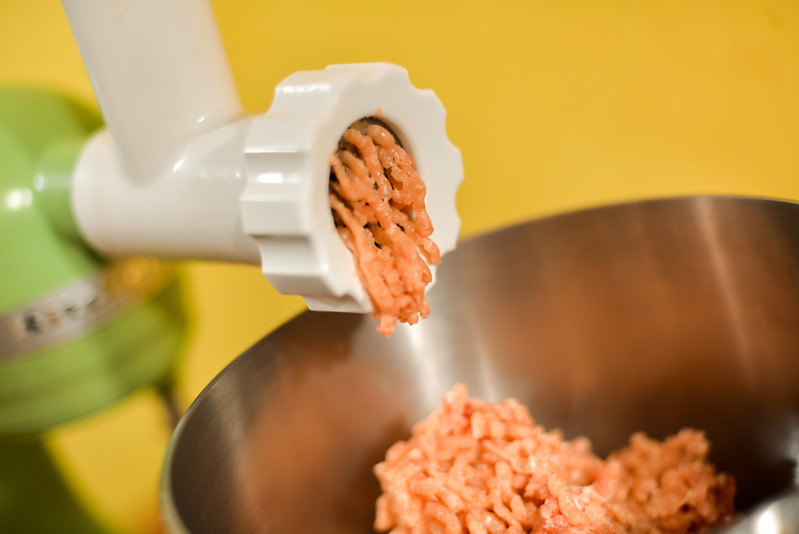 When making chicken sausage, I actually grind my chicken with the skins on to get as much fat as possible—weird, but it works. For this recipe though, I felt I didn't need to go to that extreme, so I started with skinless and boneless thighs, which I ran through the small die of my KitchenAid grinder. 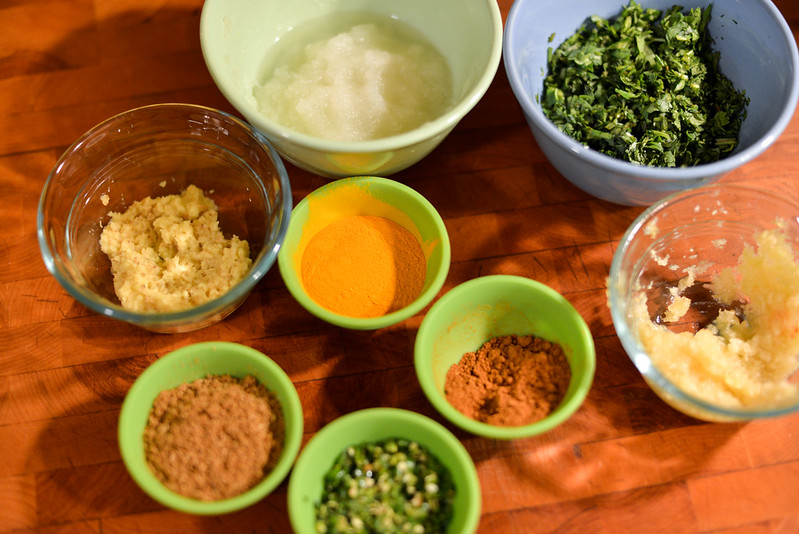 I have to admit upfront that I have almost no experience with Pakistani cuisine, and the keema Tyson brought to my house was the first I had ever tried. So I started off with a little background check, which confused more than it helped. "Keema" is somewhat of a catch-all in South Asian cooking for most ground meat mixtures. Spices and meats can vary wildly from one keema to the next, and then they can be prepared in many different ways, including stewing, pan frying, or skewering and grilling. 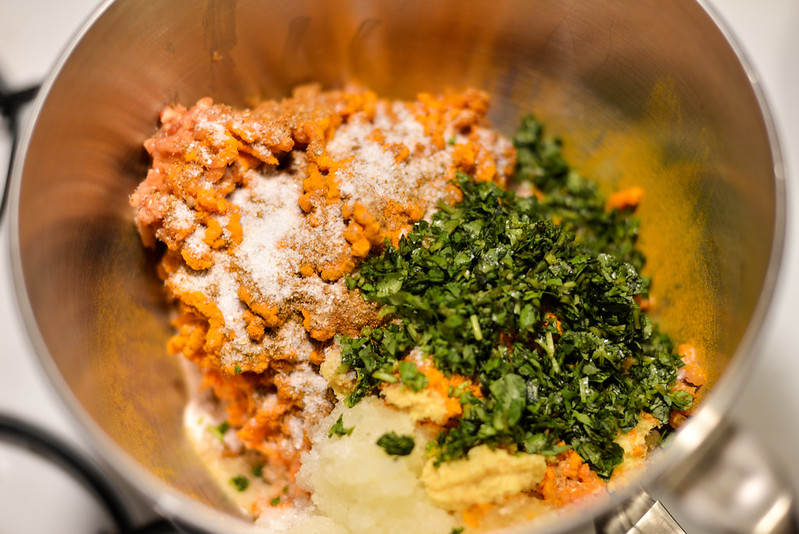 So, instead of focusing in on keema alone, I took a look at common Pakistani spices to get me on the right path to flavoring my keema. Luckily, thanks to my forays into Indian cooking, my kitchen was already filled with most of the standard players—cumin, coriander, turmeric, garam masala, ginger, and garlic. I began by mixing a hefty amount of each spice into the ground chicken, and a minimum of the Thai chilies. 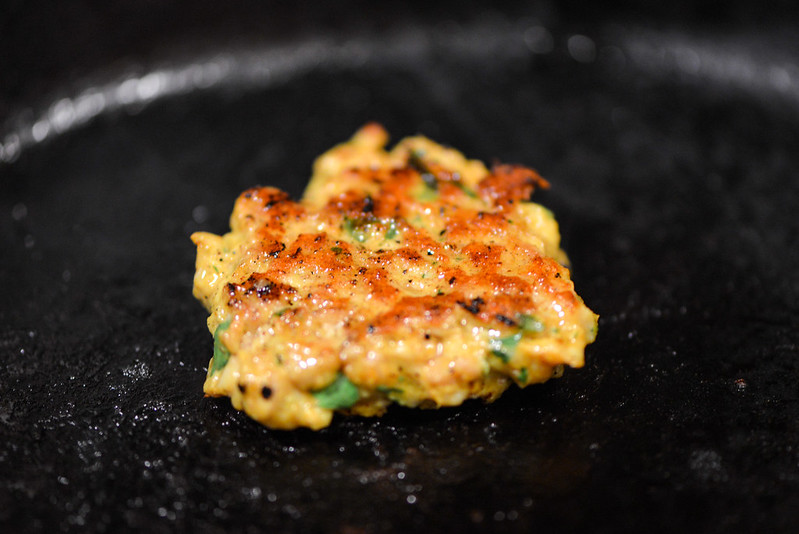 Then, one-by-one, my dinner that evening came together in the form of tiny test patties I continually fried up to check and adjust the seasoning. I wanted to be cautious with the chilies, as I tend to overdo it on the heat too often. This led me to adding the chilies in half-teaspoon increments and I quickly found that each new pepper addition required me to go back and load up on more of the other spices to hold up against the additional heat. It took a while, but I finally got a keema that had the right balance of heat and spice. 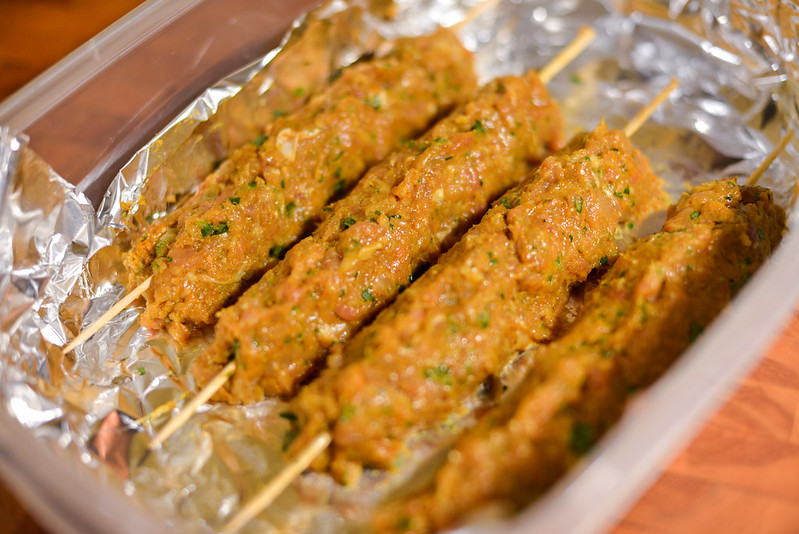 With the keema done, I wanted to serve it in friendly stick form, but if you've ever tried to skewer ground chicken before, you know this more difficult than it sounds. Unlike beef or lamb, which firms up well when worked and easily clings to a skewer, chicken stays loose and wet, presenting a problem with actually getting it to stay on the stick.

To make the skewering process easy on myself, I simply created rows of keema in a large container, pressed the skewers into the meat, and then formed the chicken around the stick. That was all fine and good, but the second you try to lift the meat out via the skewer, the skewer will come up and leave the chicken behind. 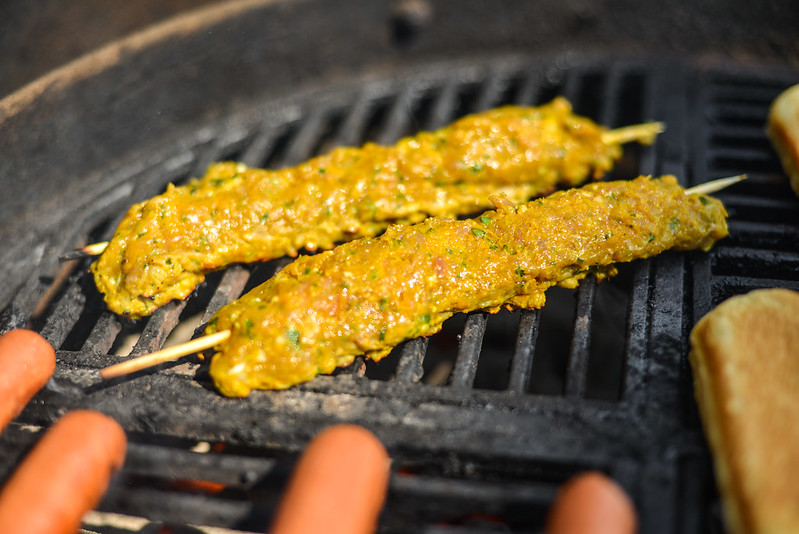 So to get chicken and skewer from container to grill in one piece, I found two options. One was to use a spatula or your hands to support the meat from the bottom during the perilous transfer, but what I preferred was firming up the chicken by giving it a quick stint in the freezer. During the 20 minutes or so it took me to light the fire to cook the keema, the chicken rested in the freezer, which firmed up the meat just enough to hold onto that skewer. 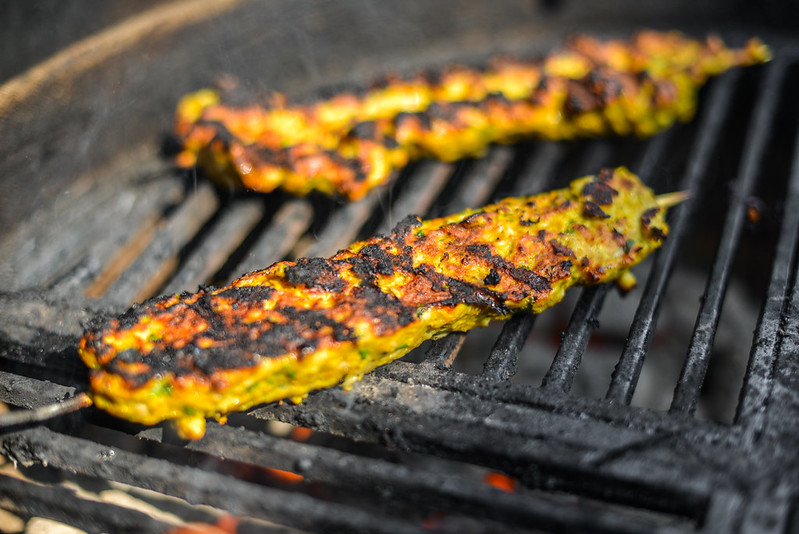 As with that first inspirational keema, this one went from a pale yellow to almost neon on the grill—turmeric in action. Once the first side browned and blackened in parts, the chicken was set enough that it could be easily turned without fear of skewer and meat separation. 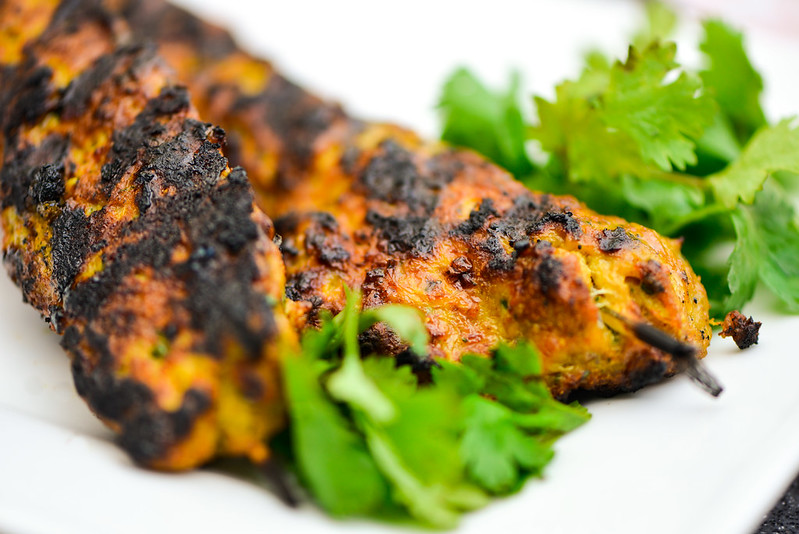 In the end, I worried that the heat I was going for would be too hot for some guests, so I made two batches of keema—one medium hot and the other super hot. To my surprise, I don't think the mouth scorching chilies turned anyone off, and all agreed hot hot is the way to go here.

Even with the heat, the pungent cumin and coriander came through, as well as the sharp garlic and ginger and fresh cilantro. It was everything I was hoping for, and although my limited knowledge of Pakistani food leaves me unable to vouch on authenticity here, it surely stood up to, or surpassed, the keema I first fell in love with.