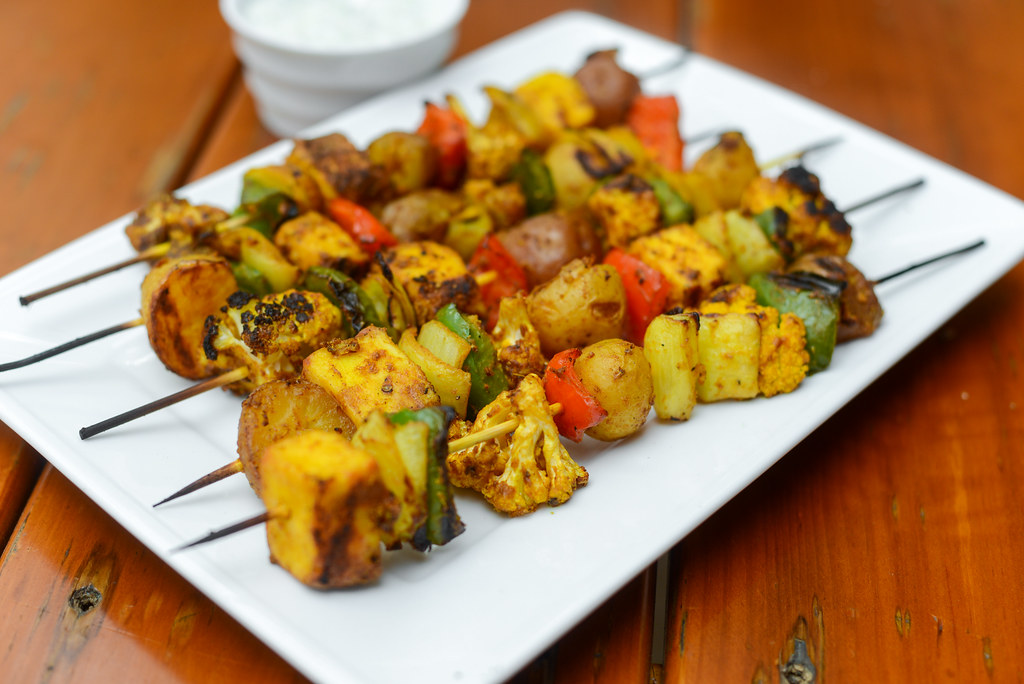 There's a reason I rely heavily on skewers to feed my guests at a number of Meatwaves—they can be totally prepped beforehand, quickly grilled, and then easily consumed without the need for plates or utensils. My biggest problem with skewers though has been finding a variation for guests who are veggie inclined that can satisfy and fulfill in a way that sticks loaded with meat do. The only ones I've done so far that have meet that requirement were halloumi and veggie skewers, where that salty, squeaky Cypriot cheese added a heartiness that made a couple sticks feel like the start of a satisfying meal. So seeing cheese as a solution to a problem, I upped my veggie-friendly skewer game by taking on an Indian-spiced version featuring some excellent homemade paneer. 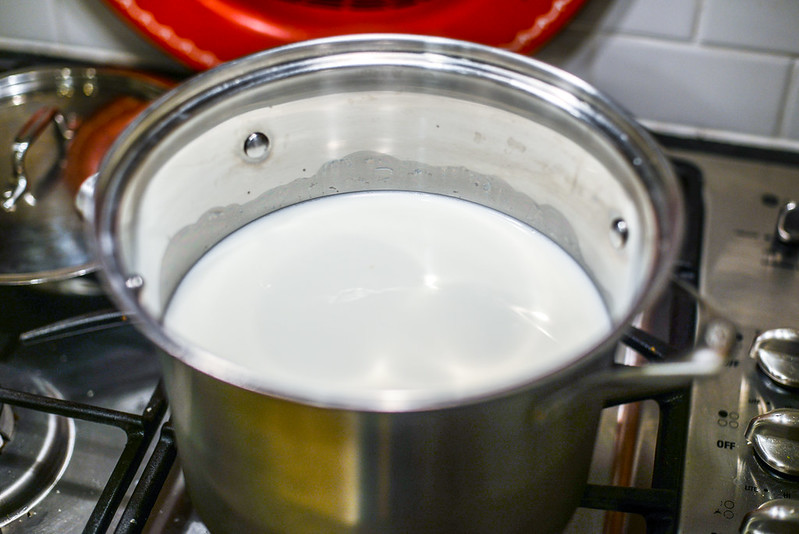 Paneer is a fresh Indian cheese that's so simple to make that it should be a first step for anyone wanting to try their hand at homemade cheese production. You just need a few ingredients—milk, lemon juice or vinegar as an acid, and salt—and minimal time to make a paneer that will rival any you can purchase in the store.

I started mine out here with a gallon of whole milk that I brought just to a boil over medium heat. 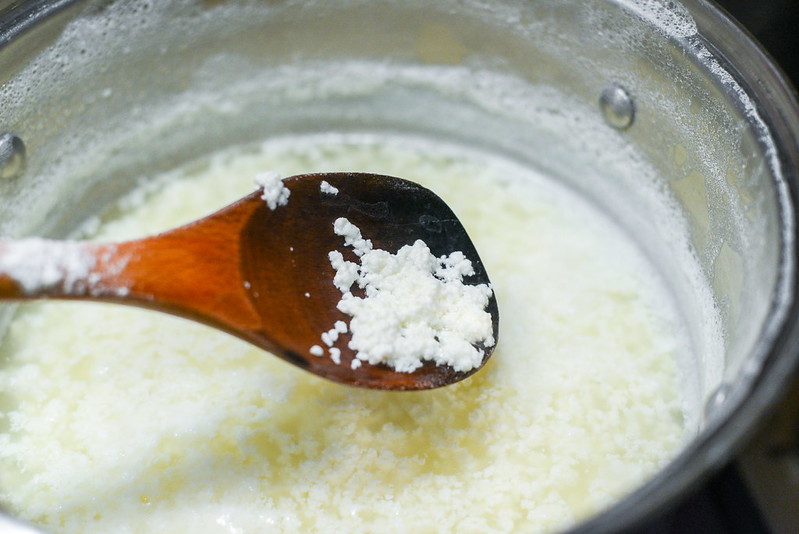 At which point I added in a half a cup of lemon juice and stirred until the milk started to curdle. I let the mixture sit off the heat for 10 minutes to allow for full separation of the curds and whey. 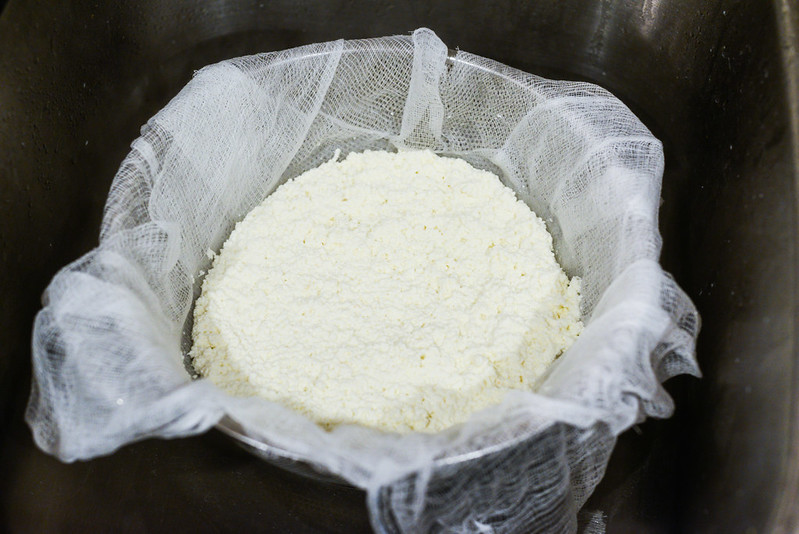 I then strained the curds in a colander lined with cheesecloth and washed them with cold water to remove the lemon flavor. 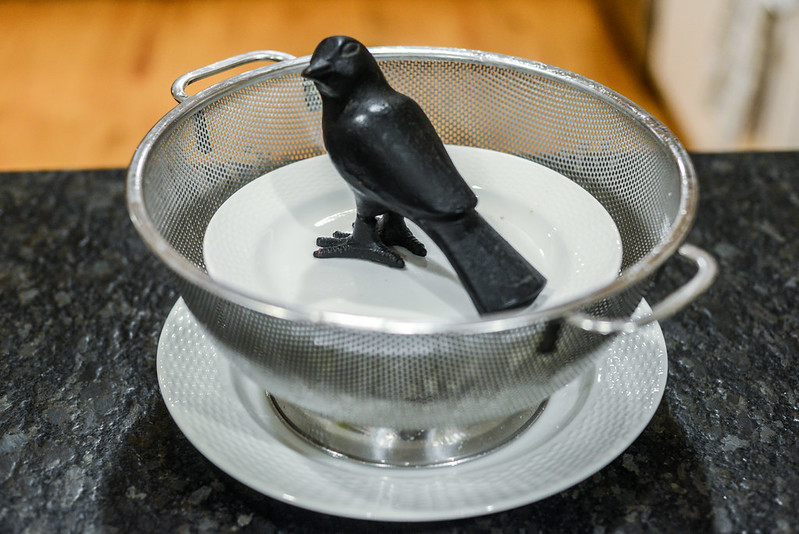 Next I gathered the ends of the cheesecloth and twisted tightly closed to squeeze out as much excess whey as possible. To finish the panner off, I weighted down a plate on top of the cheesecloth and set it in the fridge for an hour before unwrapping, seasoning with salt, and then rewrapping in plastic wrap and letting the cheese sit in the fridge overnight to further firm up—this last step made this paneer easier to skewer and helped it be solid enough to hold up well on the grill. 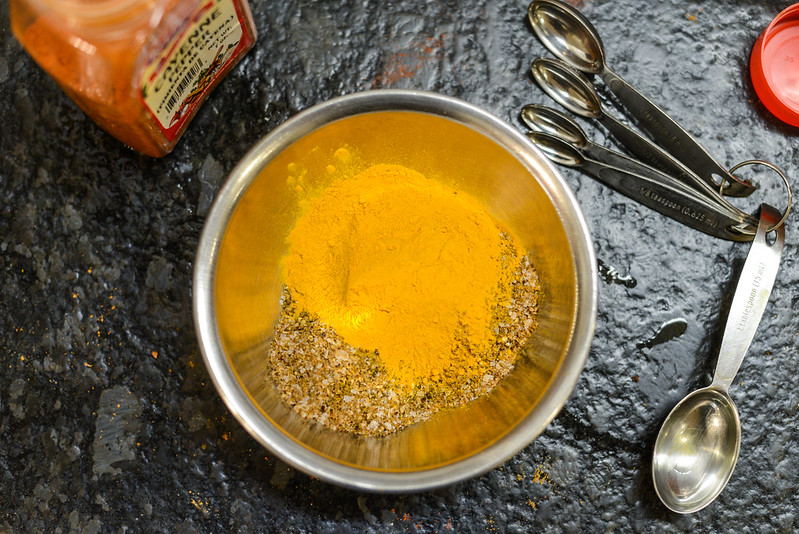 The fresh cheese was just one piece of the equation that made these skewers awesome. The seasoning was the other big component. It started with a pretty standard mixture of Indian spices—cumin, coriander, turmeric, black pepper, and cayenne pepper—but I hunted down one additional spice that made all the difference in the flavor, asafoetida.

Asafoetida is the dried and powdered resin extracted from the roots and stems of different species of ferula. In its raw form it has a bit of an off putting odor, but that mellows and becomes super savory when it's cooked. 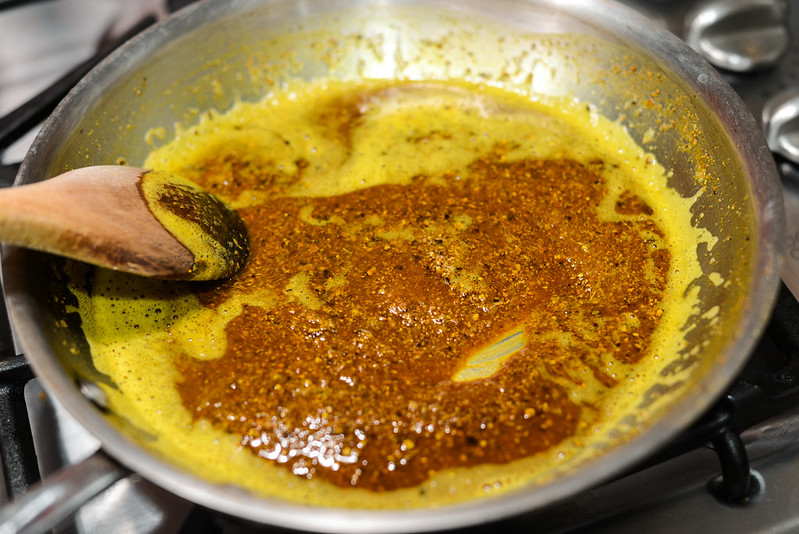 So before adding the seasoning to the vegetables and paneer, I heated a few tablespoons of oil and cooked the spice mixture in it for about minute, which was long enough to fill my kitchen with a wonderful, distinct aroma of Indian cooking. 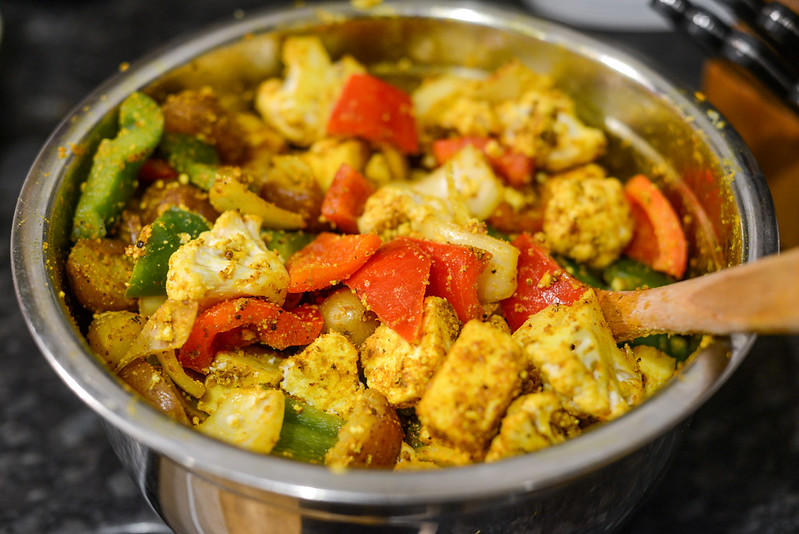 I employed a number of vegetables to fill out these skewers. I relied on the standard bell peppers and onions, but also added cauliflower and new potatoes that I had boiled until just tender. My hope was that, along with the cheese, these more filling veggies would also fulfill on the goal of making these kebabs worthy of being a meal in their own right. 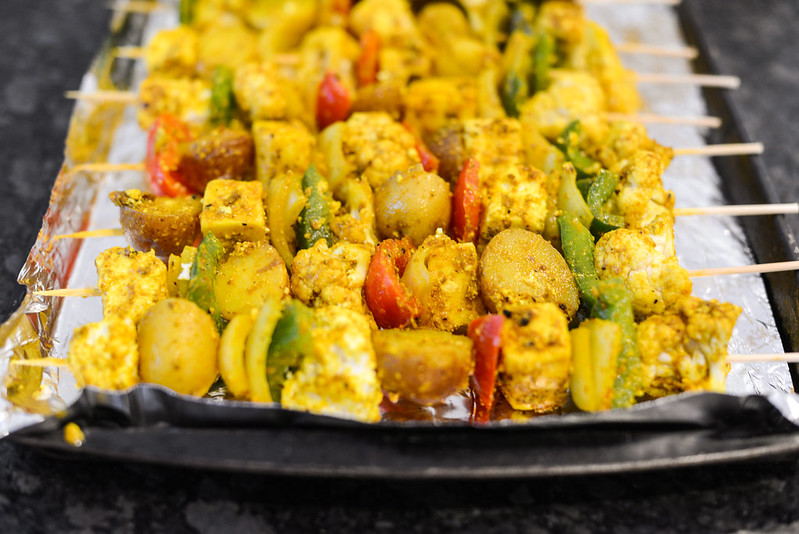 In trying to accomplish that though, I may have gone a bit overboard on the shopping. Assuming vegetables would still require more volume than meat to fill up one's belly, I ended up with an extra large bowl almost overflowing with skewer components. While that made me feel secure in the amount of food I had to serve to a large crowd, it also meant extra time in skewering everything up, which ended up being the most tedious part of a process that was otherwise really fun to put together. For smaller crowds, or less skewering duty, you can, of course, can halve the amounts in the final recipe. 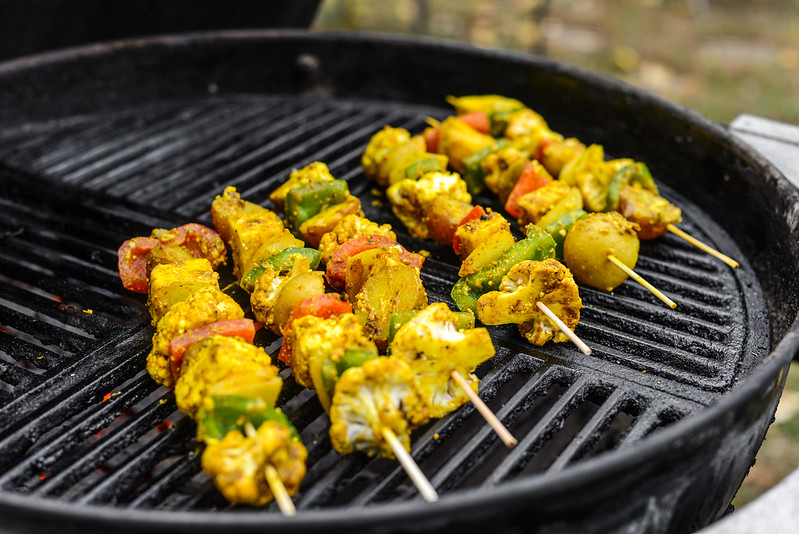 I tend to cook my skewers hot and fast, but with both the cauliflower and paneer added into the mix this time, I wanted to deliver a more gentle, even heat to cook each of those items properly. So I used a two-zone fire—where all the coals are situated on one side of the charcoal grate—and placed the skewers on the cool side of the grill to start and covered. 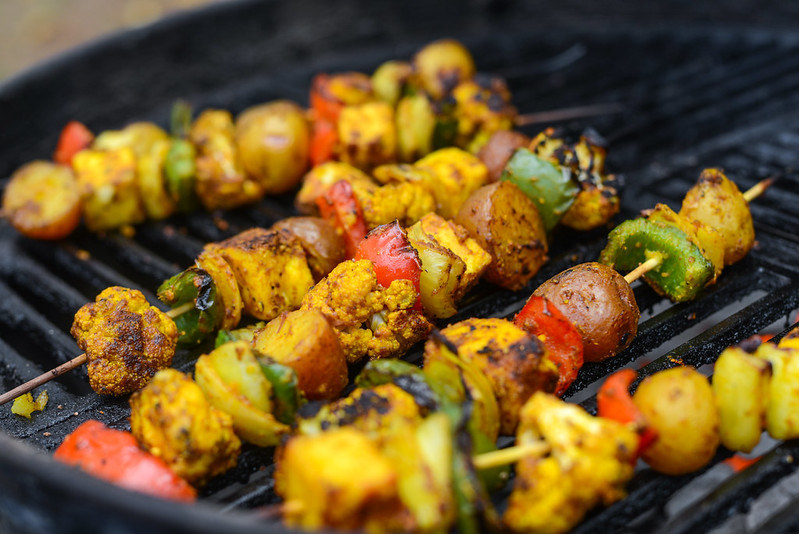 I let them cook until the paneer was softened and the cauliflower was crisp-tender, which took between 12 and 15 minutes. By this time, the edges of the peppers and onions has begun to caramelize, and they then quickly picked up a little char after moving the skewers to high heat to finish the cook. A minute or less per side was all that was needed to add some color to the skewers all over. 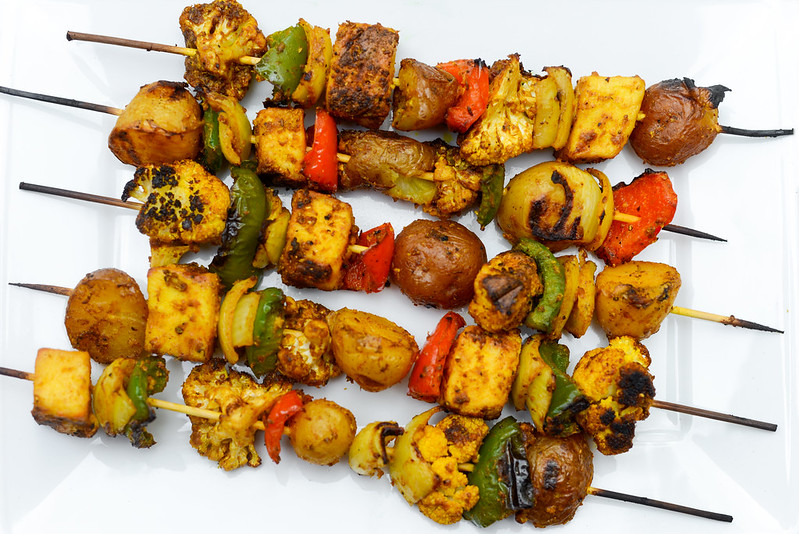 The end result was a success on so many levels. First and foremost, they tasted amazing. The spice mixture was incredibly powerful, but still let the flavor of the veggies and cheese come through, making each component of the skewer have a unique character. The paneer was tender and mellow, the peppers and onions added a touch of sweetness, and the savoriness of the spice coating really stood out on the potatoes and cauliflower. The triumph in flavor was followed by a win in heartiness, which was proven by not needing all the skewers I had prepped due to guests filling up quicker than I had expected. Taken altogether, this left me incredibly satisfied knowing that I now have a least a couple viable skewer options for my vegetarian (and non-vegetarian) friends that are in no way any lesser than the more common meat-laden sticks that grace my grill.