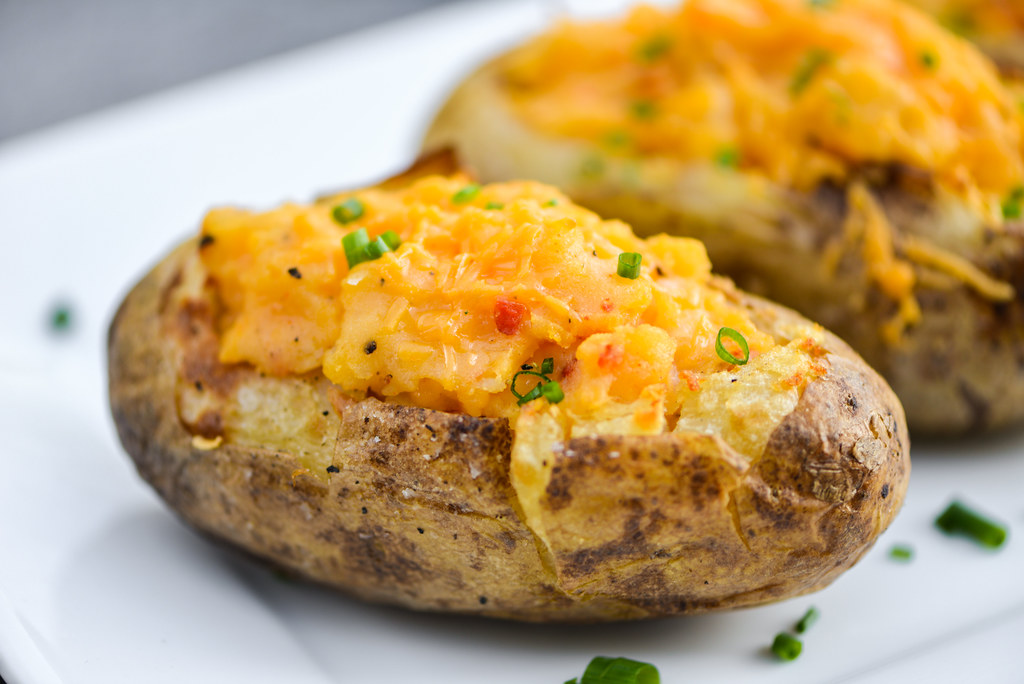 It was a gradual, creeping change. Year by year, one by one, I took over every dish of the Thanksgiving dinner, save the out of season asparagus my Mother insists on. At this point, I've settled into a menu that adorns the holiday table each year, a series of dishes I think of as family tradition. So it came as some surprise when there was a request to alter this comforting and familiar spread into something new last year.

Being a man of tradition, it came with a little trepidation that sweet glazed ham replaced the roast turkey, macaroni and cheese took the place of the cornbread and sausage stuffing, and Brussels sprouts with bacon stood in for my green bean casserole. When I asked what we should do instead of mashed potatoes, my sister made it explicitly clear that those were to go nowhere. Still, I couldn't help but wonder what would be an appropriate starchy side that would go with the new meal that was taking shape, and thought these pimento cheese twice-baked potatoes would fit in seemlessly. 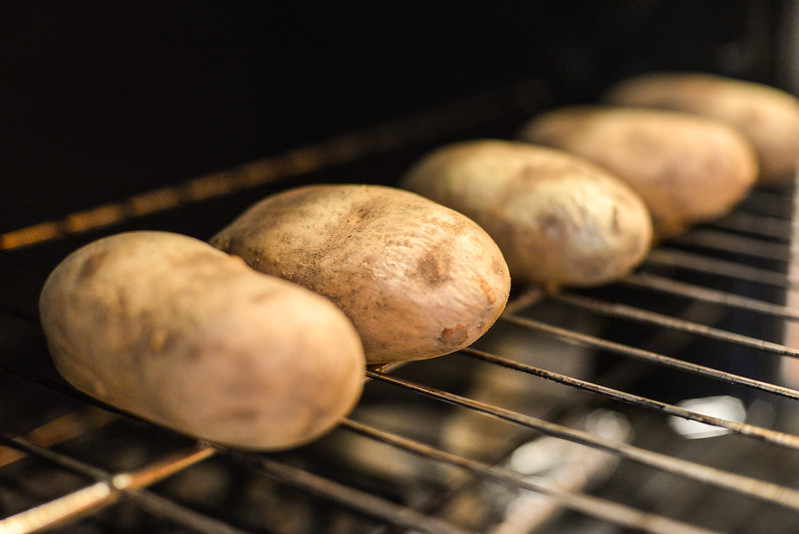 It would make sense that twice-baked potato should be baked first. I honestly rarely start by baking my potatoes in the oven though. This hour long process can easily be cut down to 10-12 minutes in the microwave, but I never did a side-by-side comparison until this recipe. Oven-roasted potatoes pitted against microwaved spuds came out with pretty identical innards—soft and easily scooped out—but the oven-baked potatoes did have a dried out, crispier crust that was absent on its microwaved brethren. If I weren't baking the potatoes again, those microwaved tubers would have been clear losers, but since these spuds were destined for two more stints of cooking on the grill, that was plenty of time to dry out and crisp the outsides. This resulted in these divergent starting points being nearly identical in the end, leaving me to say you can microwave your potatoes for the first cook with a high degree of confidence in the approach. 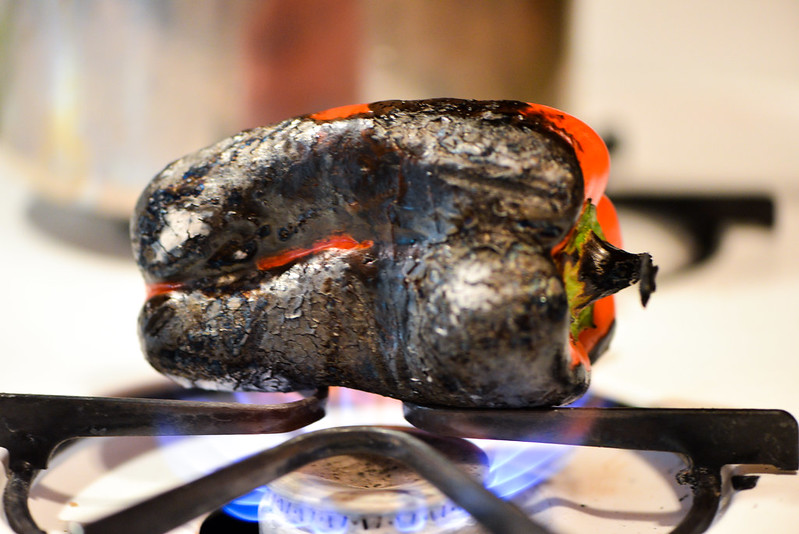 The baking of the potatoes did give me more than ample time to roast a red pepper until completely charred, let it cool in a covered bowl, then peel off the skin and finely chopped the sweet, softened flesh. For pimento cheese, I often just go for the jarred roasted peppers, but the home roasted ones have a sweeter, fresher flavor that makes the extra effort well worth it. 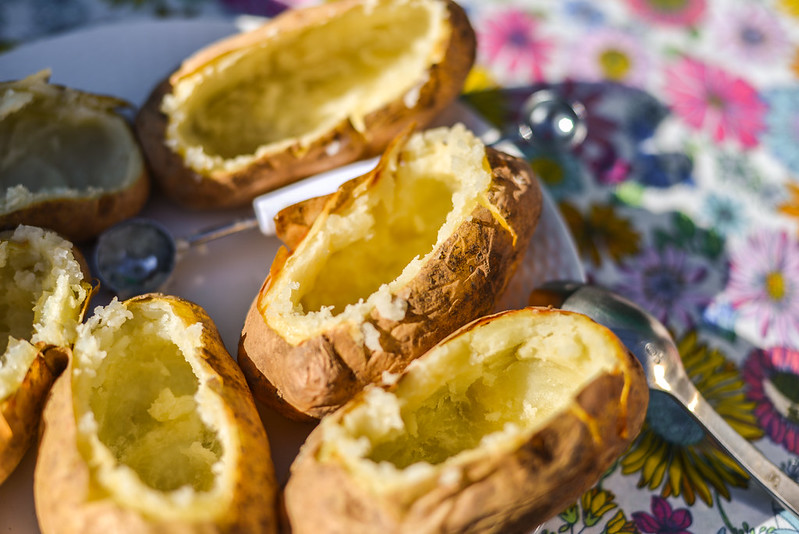 Once the potatoes were cool enough to handle, I sliced off the tops and started scooping out the soft innards with a spoon. In trying to leave only an 1/4 inch of flesh remaining inside the spud, the spoon was a little too primitive for my clumsy hands and resulted in the tearing a few of the potatoes. I then switched to a mellon baller, which did the job with ease, albeit taking slightly longer due to it small size. 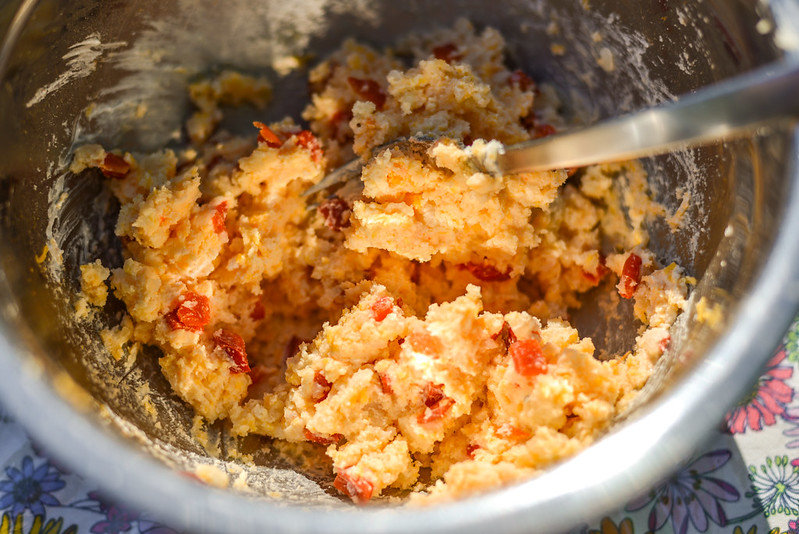 I brushed the now empty spuds with butter and seasoned them with salt and pepper. I then placed them over indirect heat on the grill while I turned my attention to making the best damn pimento cheese filling possible. This required both sharp cheddar and the roasted red pepper to taste right, but I wondered if the third ingredient in the equation—mayonnaise—would be right for the potatoes. So I tried a few out with mayo mixed in, but did a couple more variations following my instinct, one using sour cream and another with sour cream and butter. 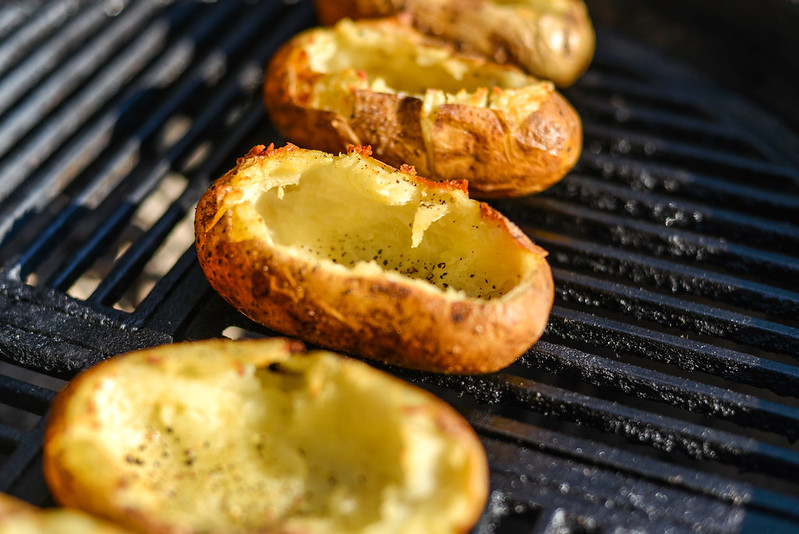 After about ten minute on the hot grill, the potatoes browned around the edges and the outsides became drier and crispier—this is when the microwaved spuds became indistinguishable from the oven-roasted ones. With the right exterior now set, it was time to get these off the grill and on to stuffing. 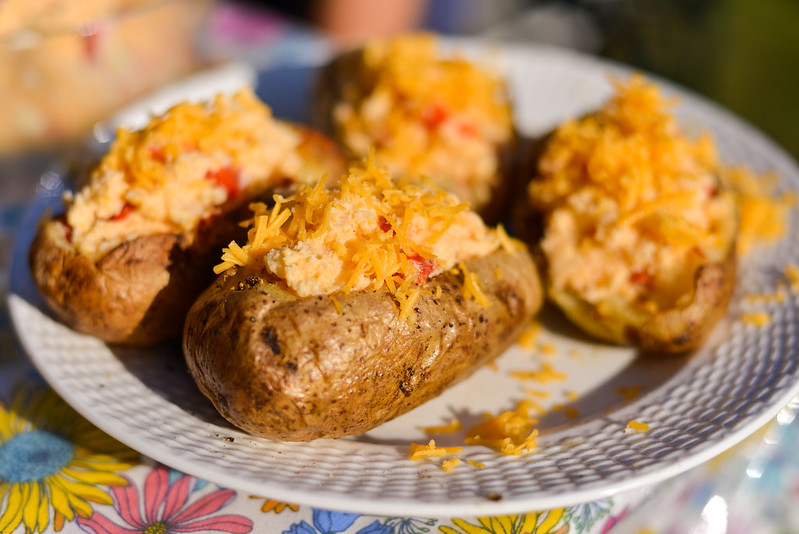 I overflowed each potato with a generous helping of the pimento cheese flavored filling. Then I sprinkled on a little more cheddar for good measure, because you can never have enough cheese. 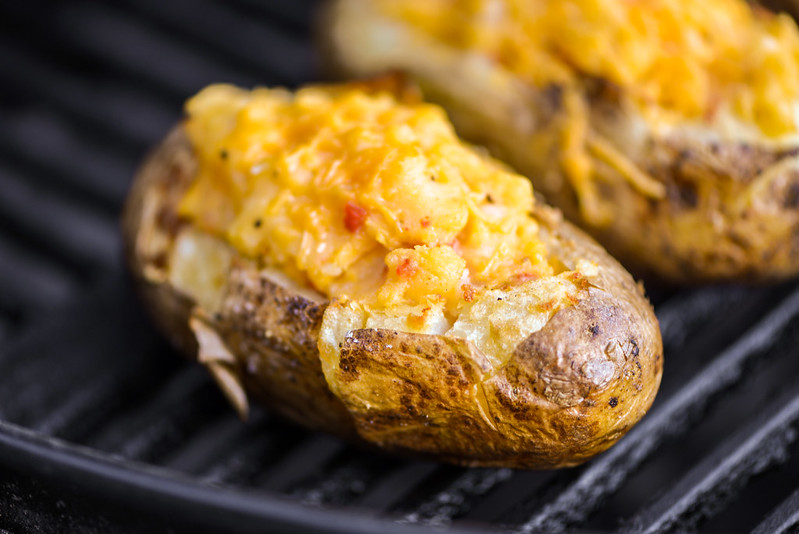 Back on the grill they went, this time to allow the heat to rewarm the interior throughout and melt the cheese topping—about another ten minutes of time. 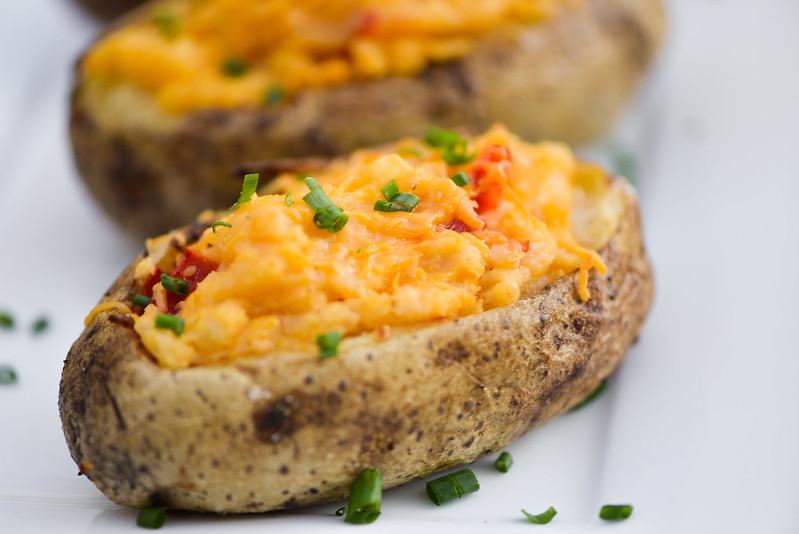 My long pimento cheese twice baked potato journey was almost at close, it now came down to some extra-hearty eating. All the potatoes had the right crisped exterior consistency, but the inside was a whole different story. The mayo-laden mixture was dense and heavy, lacking that fluffy texture and extra richness of really good twice-baked potatoes. The sour cream was a wise sub, these potatoes were definitely lighter and had a tanginess that seemed to enhance the sharp cheddar bite and sweet peppers. The version that brought butter in the fold took top honors though—they had the best creamy and fluffy potato filling plus an added richness on top of the ubiquitous pimento cheese flavor. There's no doubt I would have happily replaced mashed potatoes with these twice-baked spuds on my Thanksgiving table—if those mashers hadn't been the sole holdover of a tradition I've long been developing.