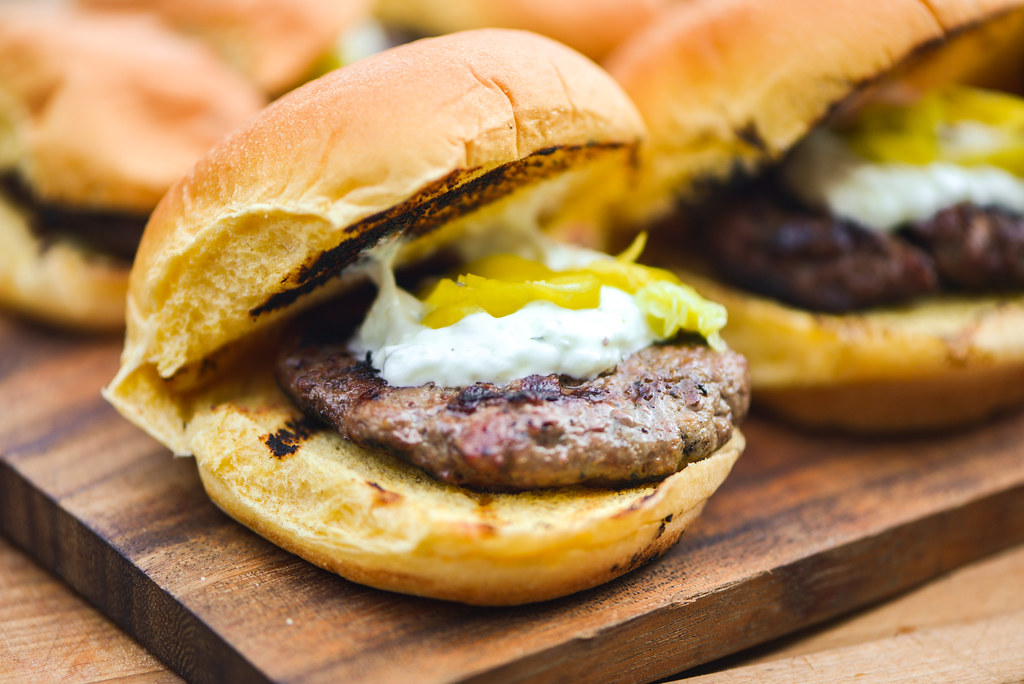 I have to start out this post giving credit where credit is due—these mini-gyro burgers are a direct inspiration from MP Taverna in Astoria, Queens mixed with a Greek-America gyro loaf recipe devised by my editor at Serious Eats, Kenji. Although the translation of trying to make a really good gyro-inspired burger ended up being pretty direct, the road to it came with some learnings on building a small-scale burger for the grill, and striking just the right balance between this being able to be considered a burger, but still taste distinctly like a gyro.

The Balance Between Burger and Gyro 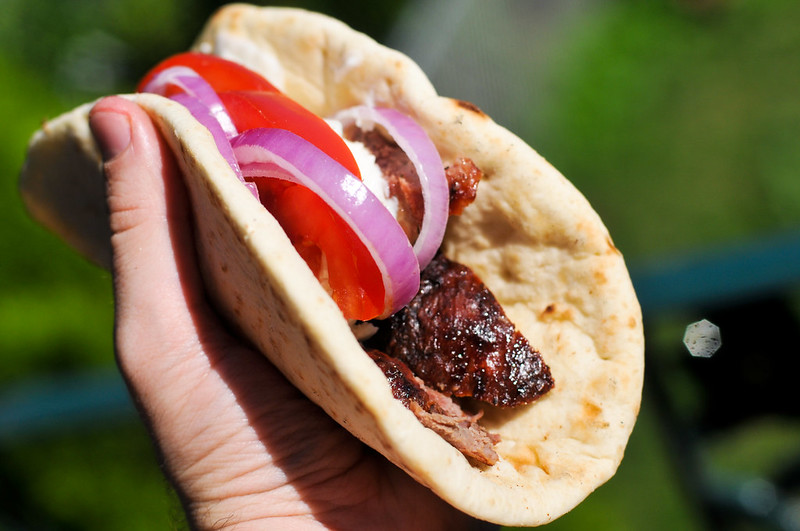 My goal here was to create a burger that would be instantly recognizable as having all the classic flavors of a gyro. The version at MP Taverna is all-beef, and while they have a seasoning that gives them a light, gyro-like flavor, I'd classify them as more burger than gyro. I wanted to take their basic concept and push it even further into gyro territory. My first step was to perfect the meat patty. 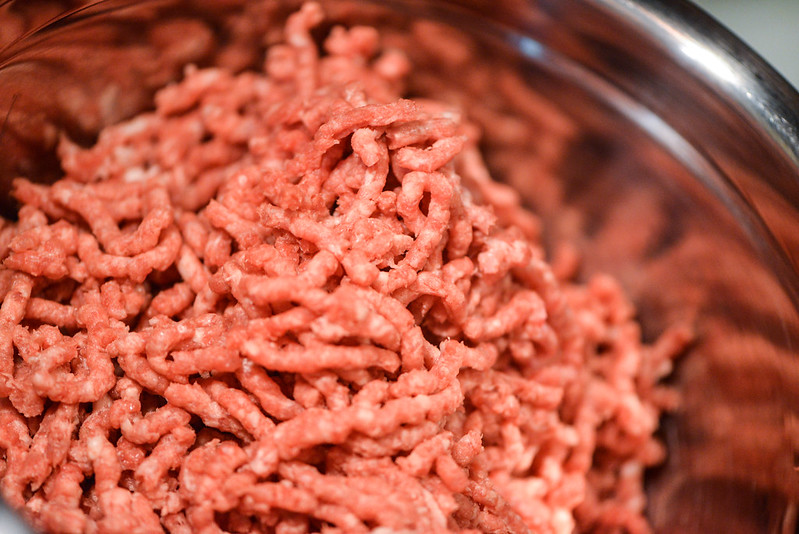 The quintessential Greek-America gyro loaf tends to be a combo of beef and lamb, generally with a ratio that favors beef. Kenji's recipe, though, relies solely on lamb, and I think the flavor of that loaf beats any I've eaten at restaurants. Still, since I was making a burger, I didn't want to rule beef out automatically. To test out my options, I decided to make three different batches of my gyro-mixture: one all beef, one all lamb, and one split 50/50.

I also made sure to add some extra fat to the blend for maximum juiciness. I used pork fatback, leftover from a loukaniko recipe I had been working on, to bump the fat content up to 30%. For those without a stash of fatback on-hand (I'm assuming that's most of you), bacon is a solid substitute. 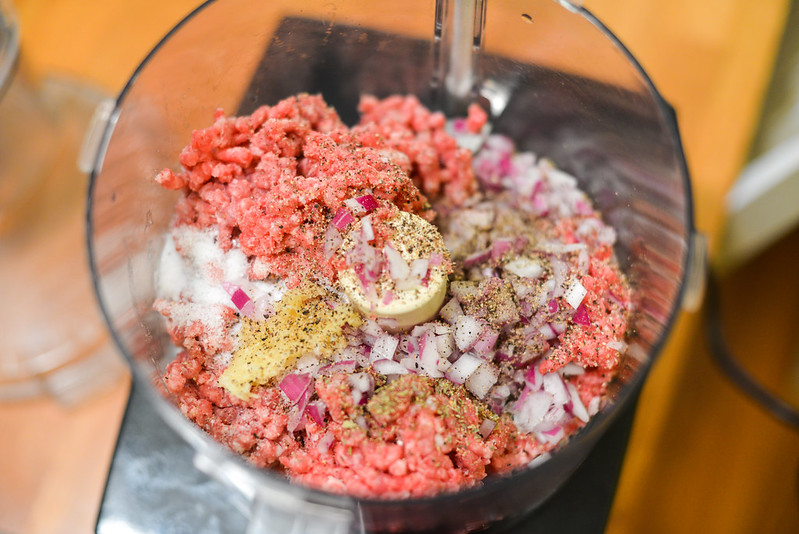 I kept the seasoning consistent across all three batches, using the ubiquitous combo of onion, garlic, and oregano. It's a winning mixture that can make almost anything taste Greek. 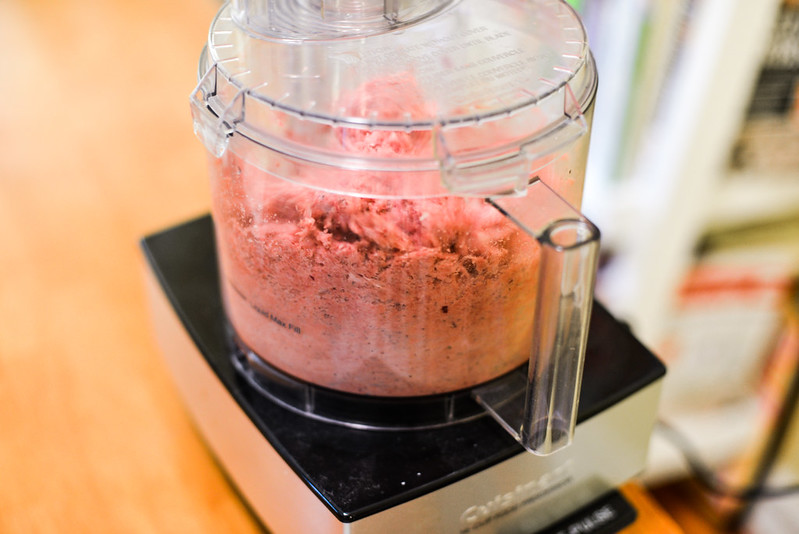 Next, I had to consider texture. Normally with burgers, I advocate handling the meat as little as possible, since the goal with burgers is typically to create a loose, crumbly texture and not a sausage-like one.

That more coarse, classic burger texture, for instance, is what they serve at MP Taverna. But since I was going for a gyro-effect here, I decided to also try the finer, more cohesive texture of a gyro-loaf. 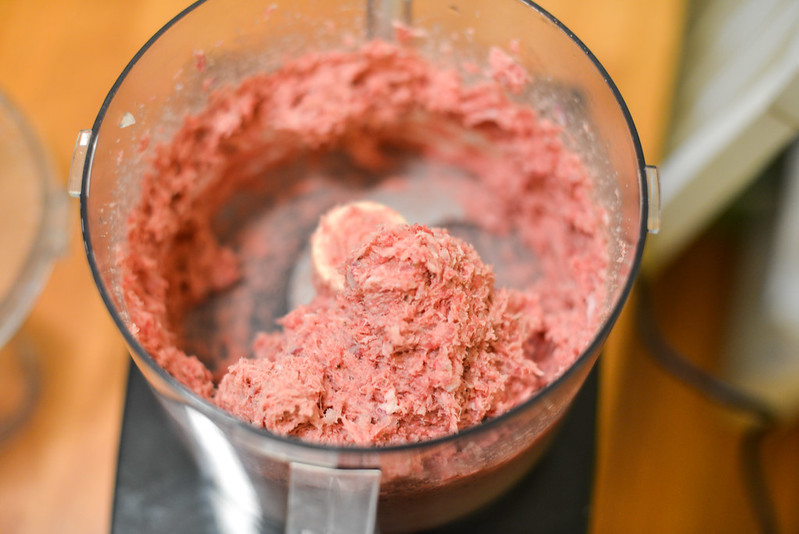 I split all three meat mixtures in half, leaving one half of each batch coarse and puréeing the other halves in a food processor, which emulsifies the meat and fat, turning it into a paste-like substance with a fine texture not unlike that of a good, homemade hot dog.

Once my test batches were all seasoned and processed, I divided each one-pound batch into nine uniform little patties. Make sure to form your patties on the large size—mine started out bigger than the diameter of my potato rolls—to allow for inevitable shrinkage on the grill. 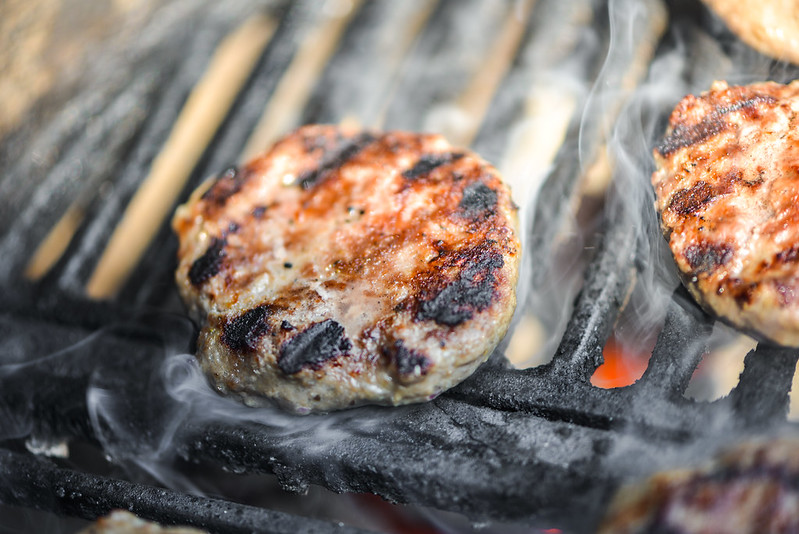 The grill was the one area in which I wasn't intending to have any issues. Let's just say I came out of the experience with some new insights.

Just like any burger, I cooked these over a medium-high direct fire. 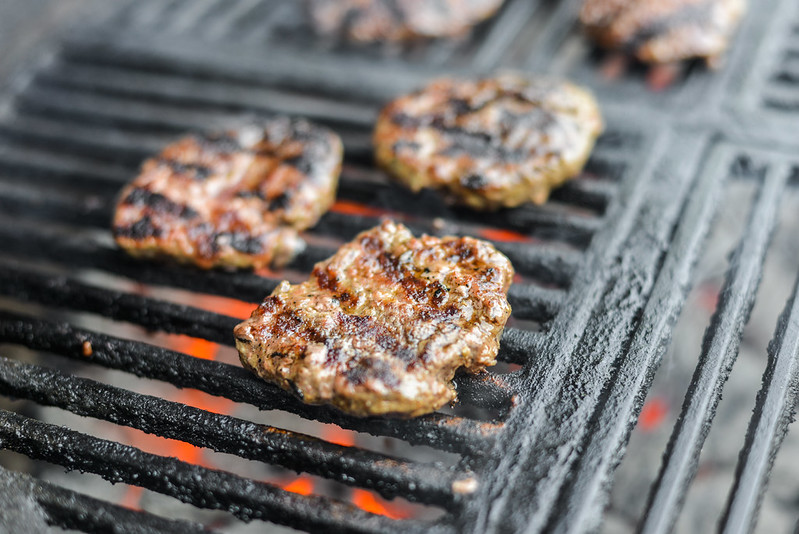 I started with the puréed gyro-style mixtures, which all performed beautifully, browning and holding together like real champs. Then came the coarser burger-like patties. Without the heft of a regular-sized burger, these were prone to breaking apart, even after I'd seared them on one side. The looser meat mixture and smaller size was not a good combo for this type of hot-and-fast direct grilling. Although none were inedible, they weren't nearly as easy to grill as the others. 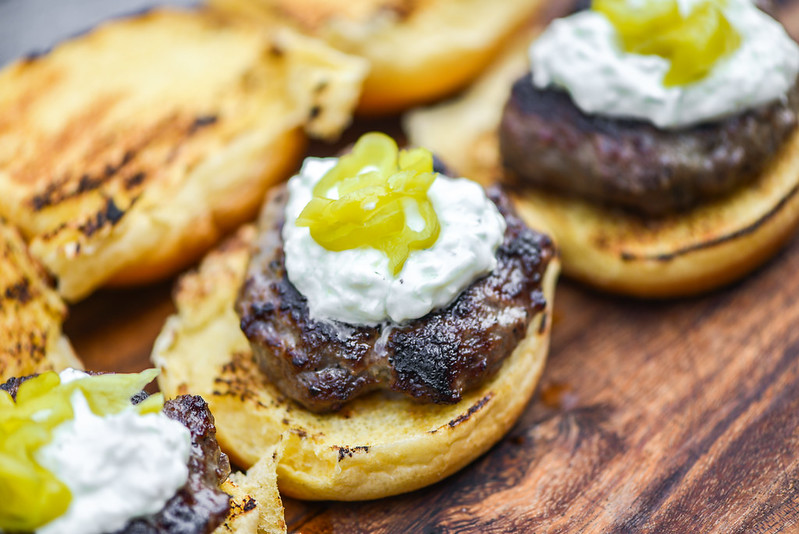 After the batch was complete, I gave each mini gyro burger the same topping that you'd find at MP Taverna: a dollop of tzatziki and a few slices of pickled pepperoncini. This simple two-topping combo is actually one of my favorite things about the restaurant's burgers. The tzatziki delivers a cooling flavor that's distinctly Greek, while the pepperoncini provide acidity, tang, and some mild heat. 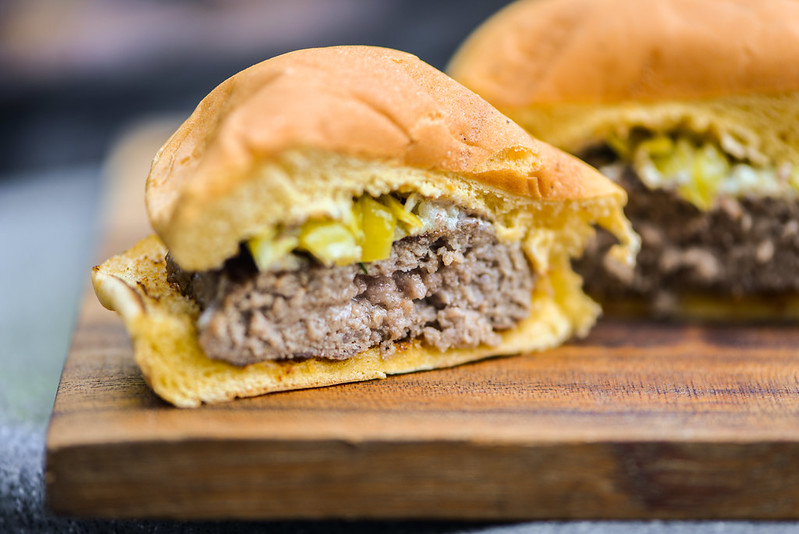 With six different burger variations, my friends and I had some serious eating ahead of us. When it came to meat blends, the half-beef/half-lamb mixture was a real crowd-pleaser. The all-lamb was a close second, but everyone agreed that the all-beef burgers didn't quite capture the gyro spirit. 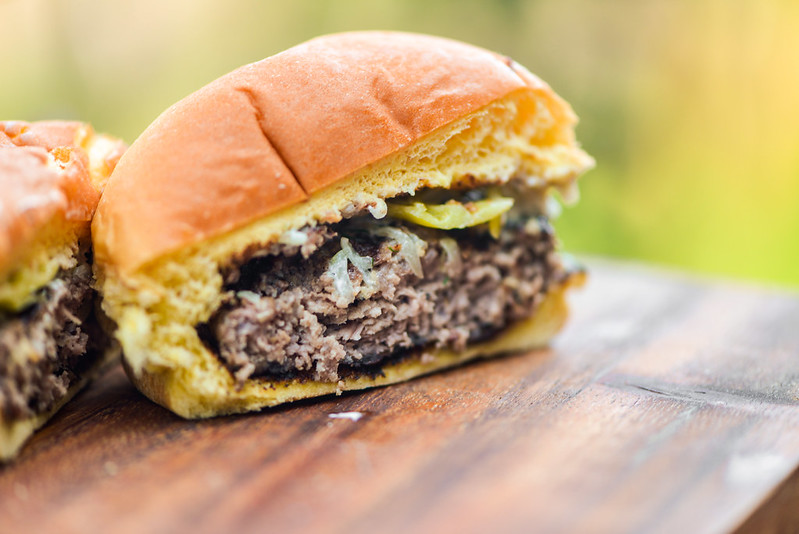 As for texture, I already knew from grilling them that I had a pretty clear winner. The taste test confirmed it. While both batches had cooked for the same amount of time, the finer textured patties actually turned out juicier and more recognizably gyro-like than their coarse-ground brethren. Turns out that in some cases, it's okay to break with burger tradition and work the hell out of the meat. 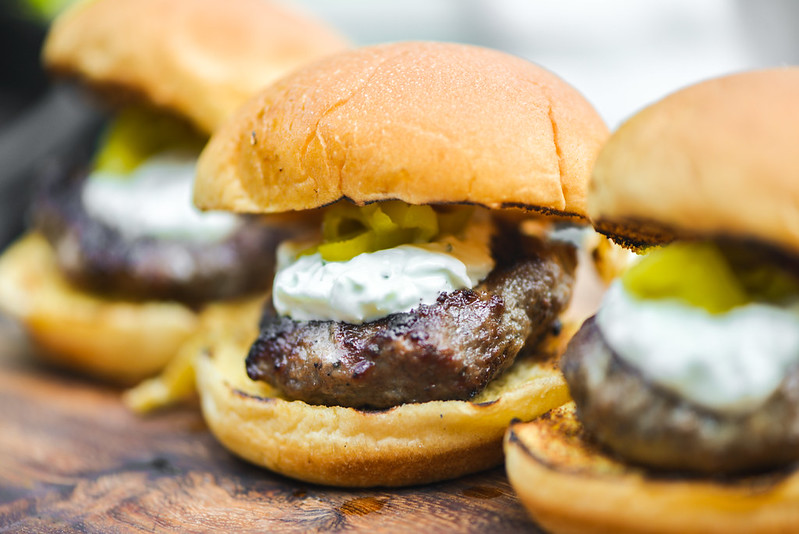 All around, this recipe makes an incredible little mezze that unites all the best elements of a great gyro-loaf—rich, juicy meat with a garlic-and-herb seasoning—and a hamburger. In the end, the recipe may not be exactly the same as its original points of inspiration, but it all comes together to make something utterly unique and pretty damn delicious. 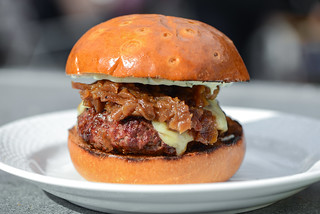