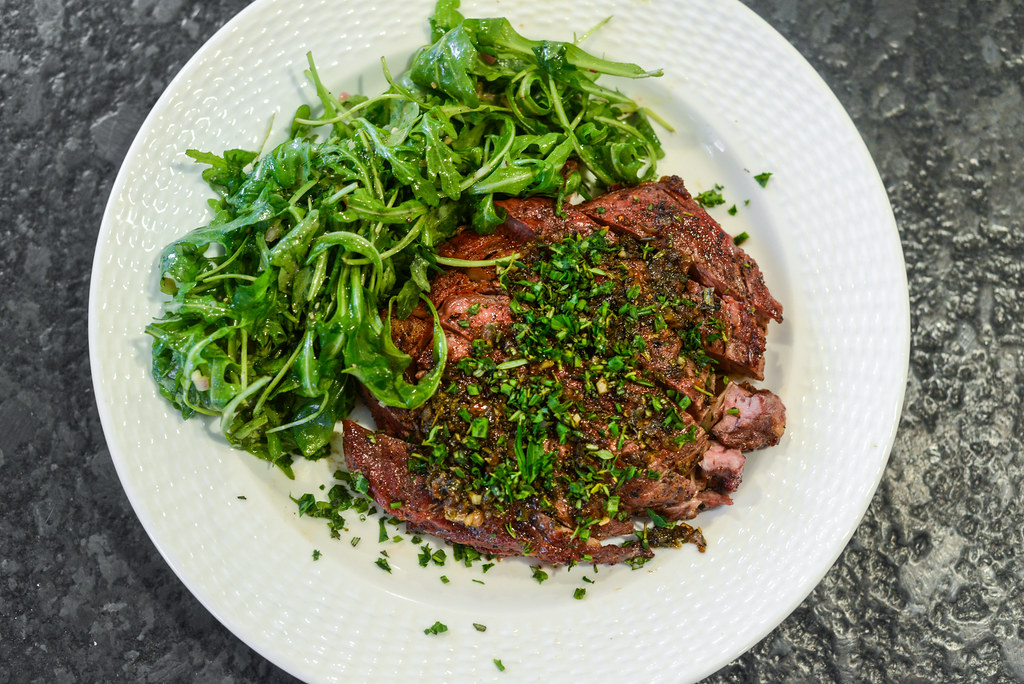 To date, I've steered pretty clear of grass fed beef. The main reason being is that my favorite part of a cow is fat, and grass fed beef is notoriously lean, making my main impetus for purchasing steaks nearly null and void. Still, I've heard good things, and constant meals of grass means the cattle are grazing on their natural diet, which I'm on board with. So when the folks at Wild Sky Beef made me an offer to try some of their grass fed beef, I let go of my hang ups and took them up on their deal and ended up with both ribeyes and strip steaks to use for recipes like this one that pairs grilled steak with a delicious brown butter and herb sauce. 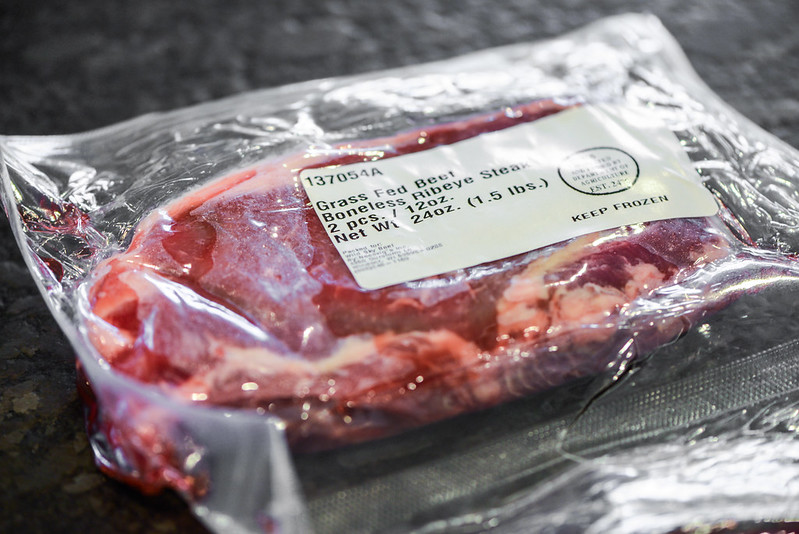 I'm always a little wary of mail order steaks because I like going to the butcher and really seeing what I'm paying for. A lack of proper butchers where I currently live, and some previous really good experiences getting exceptional steaks via the mail, has changed my thinking—the best steaks I've had since moving to North Carolina have all been delivered to my doorstep. 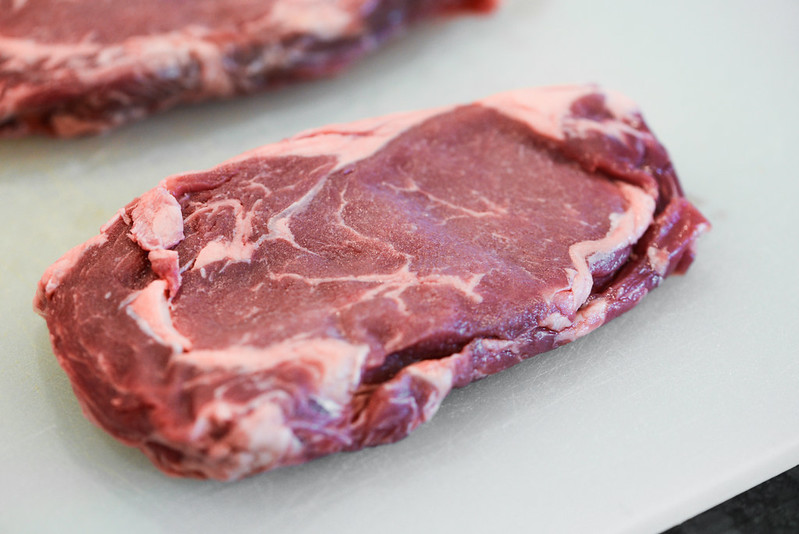 The Wild Sky ribeyes came in a package of four steaks that were approximately one-inch thick and weighed 3/4 of a pound each. As I expected with grass feed beef, this was a bit smaller of a ribeye than I was used to and it was also incredibly lean with minimal intramuscular fat, but they still had a nice amount of intermuscular fat around the edges and between the main muscle and the cap. 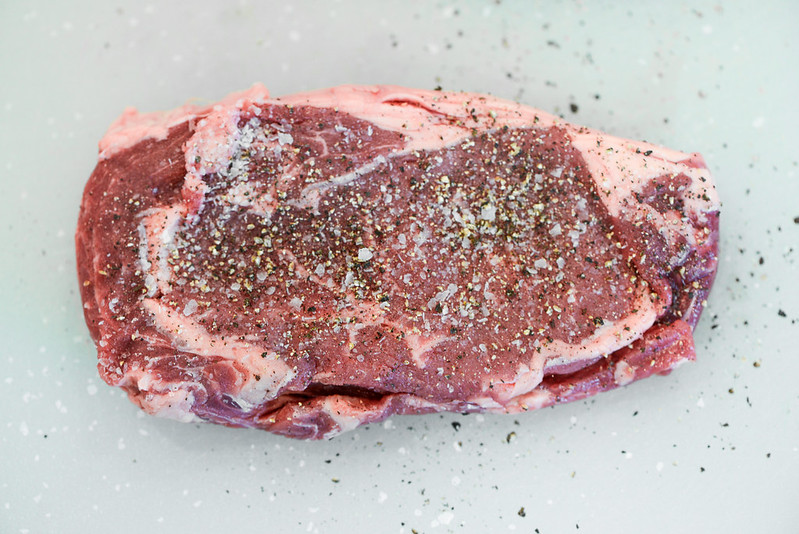 As with just about all steaks, my first step was to give them a good seasoning and then a rest. I coated the steaks liberally with salt and pepper—albeit going a little lighter on the salt than normal because of the thinner cut—and let them rest for forty minutes. During this time the salt draws moisture out of the meat, which is the reabsorbed, resulting in both better moisture retention and more concentrated flavor. 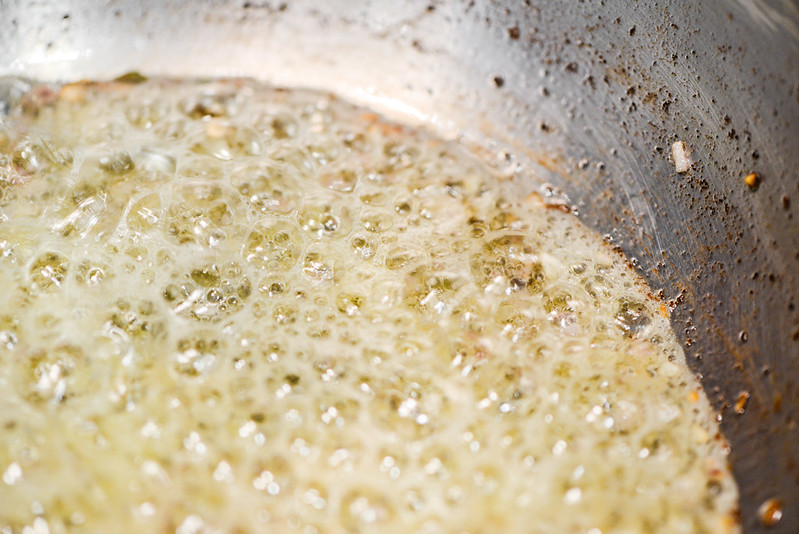 While the steaks rested, I made my sauce. I was looking for something light and simple that would also introduce a little extra richness and a herbed brown butter sounded like it would check all of those boxes. I began by softening some shallots in melted butter over medium-low heat. Once they were tender and translucent, I cranked up the heat to high and the butter quickly began to bubble and then brown. 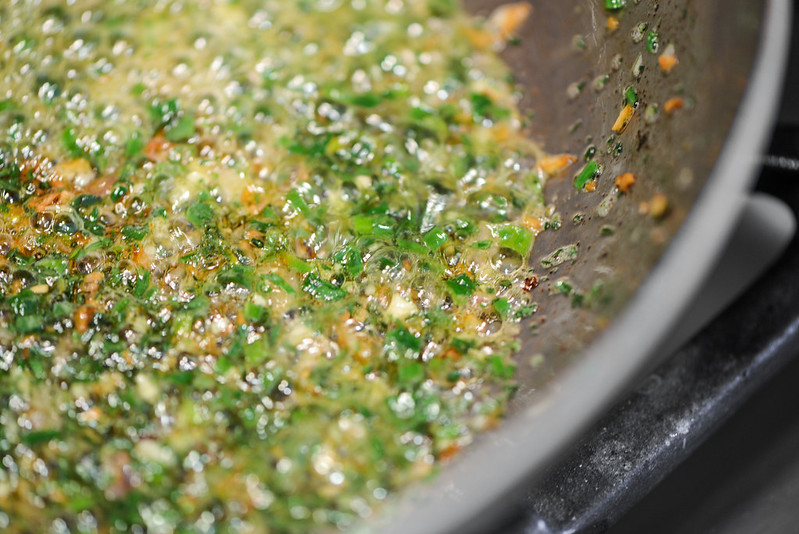 It's hard to see here, but around the edges you can make out some of those darkened bits that give browned butter such an excellent nutty flavor. In order to not burn the sauce, I then removed it from the heat and added in the remaining ingredients, which only needed to cook long enough to be fragrant—a mixture of herbs, garlic, crushed red pepper, and lemon juice. Once cooled slightly, I gave my sauce a taste, adjusted the seasoning, and was happy with its bright and fresh character that I was looking forward to seeing how it would play with the steaks. 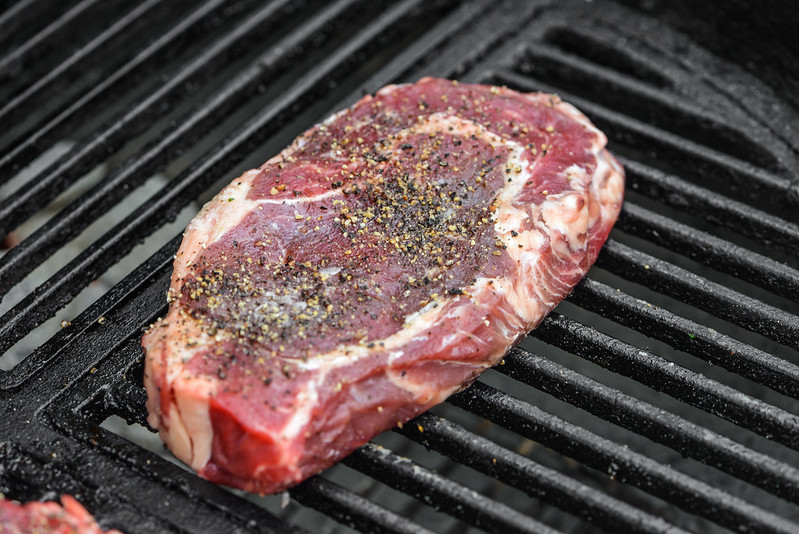 On the grill, I used the reverse sear method to cook the ribeyes. This involves first roasting the meat over indirect heat until its about 10 to 15 degrees shy of its final target temperature. Then it's finished over direct heat where the now-dried exterior browns quickly and the steaks are brought to their final temperature. 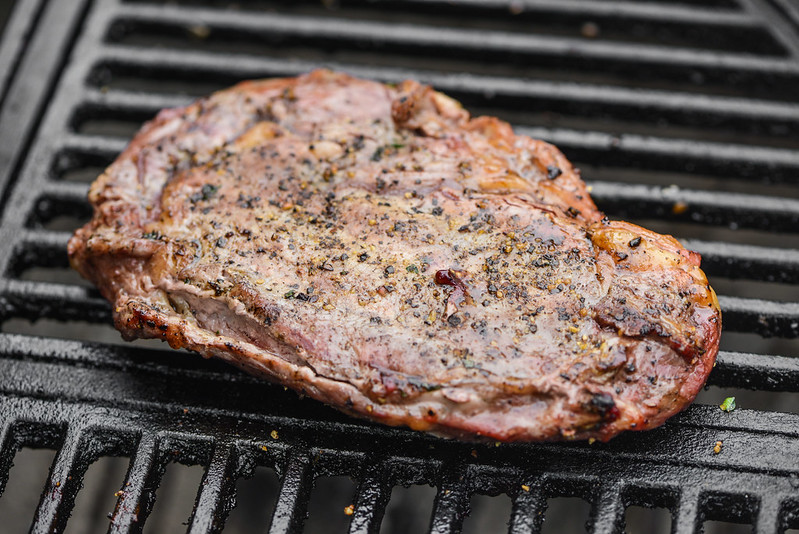 I knew that being lean, these grass fed steaks would cook faster than fattier specimens—rendering fat slows the cooking process—but underestimated just how quickly they would be done. I had gone inside to snap some quick pictures of a mushroom recipe I was also working on that day, and when I came back out, probably just over five minutes later, my steaks were already almost 125°F in the center. Seeing as I was shooting for a final target of 125°F, these steaks were already going to be "overcooked" from desired medium-rare. Guess this really puts my grass fed beef rookie status on full display. 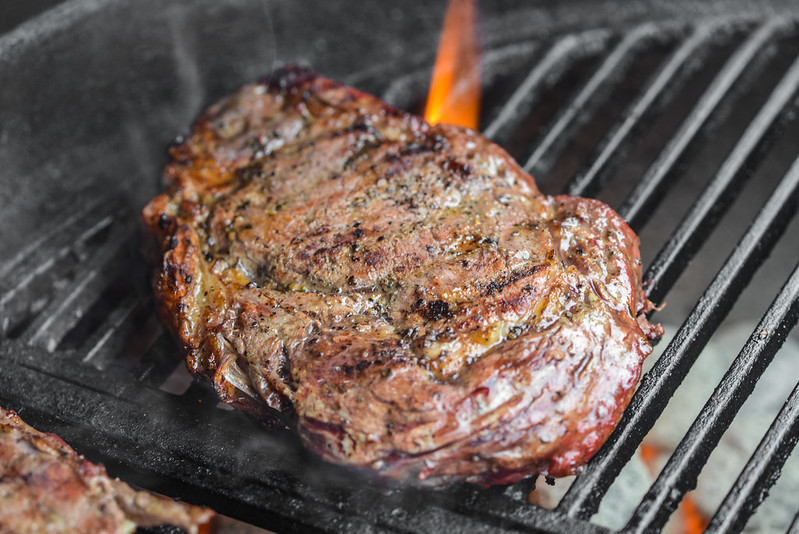 To help avoid them from becoming well done, I removed them from the grill and let them sit out for about five minutes to cool off slightly. I then put them back on the grill, directly over the fire, and in no time they became beautifully seared. As I was developing their crusty exteriors, I flipped the steaks constantly, which aided in even cooking and quicker browning. 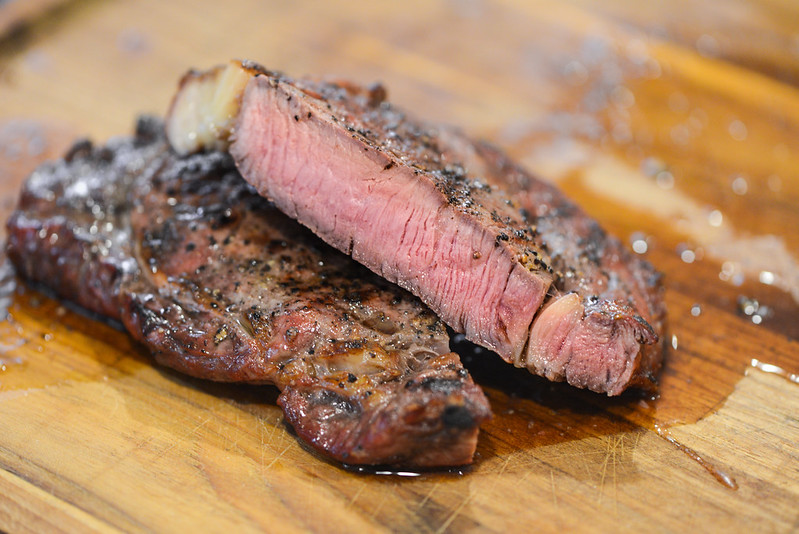 The ribeyes ended with an internal temperature of 135°F, which is medium territory—not a horrible end result. When I cut the steak open, I was still greeted with a rosy red interior, it just wasn't as soft and dark red as I like for my own personal tastes. 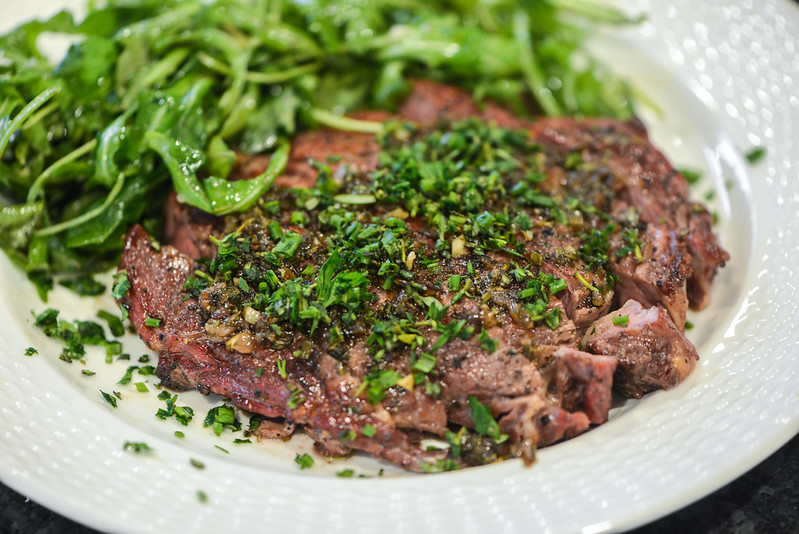 After slicing the steaks, I plated them and topped with the herbed brown butter sauce and an extra sprinkling of fresh herbs. Despite my mishap in cooking, these steak were still mighty tender. That wasn't the most surprising thing though—that fell to the overall flavor. I've always been led to believe that with beef, fat equates to flavor. Although being incredibly lean, these steaks were intensely flavorful. It wasn't the standard beef flavor I was used to though, it had a slight gamy quality to it, which I can best describe as a lightly flavored piece of lamb—which I love.

That extra flavor in the meat made the way the sauce worked with it even more interesting than expected—the bright acidity and strong herbal touch of the butter struck a balance with the beef, melding more than sticking out as its own distinct topping. This created a bit of excitement on how different grass fed beef is and the world of opportunities it opens up for new flavors. My only real qualm was that the short cooking time meant that what fat was on the steak didn't soften enough to be easily edible, so I missed my beloved beef fat, but that's part of the point of grass fed I guess. This has me devising a potentially better method for next time around though—sous vide first and then grilling so I can have my meat and luscious fat too!