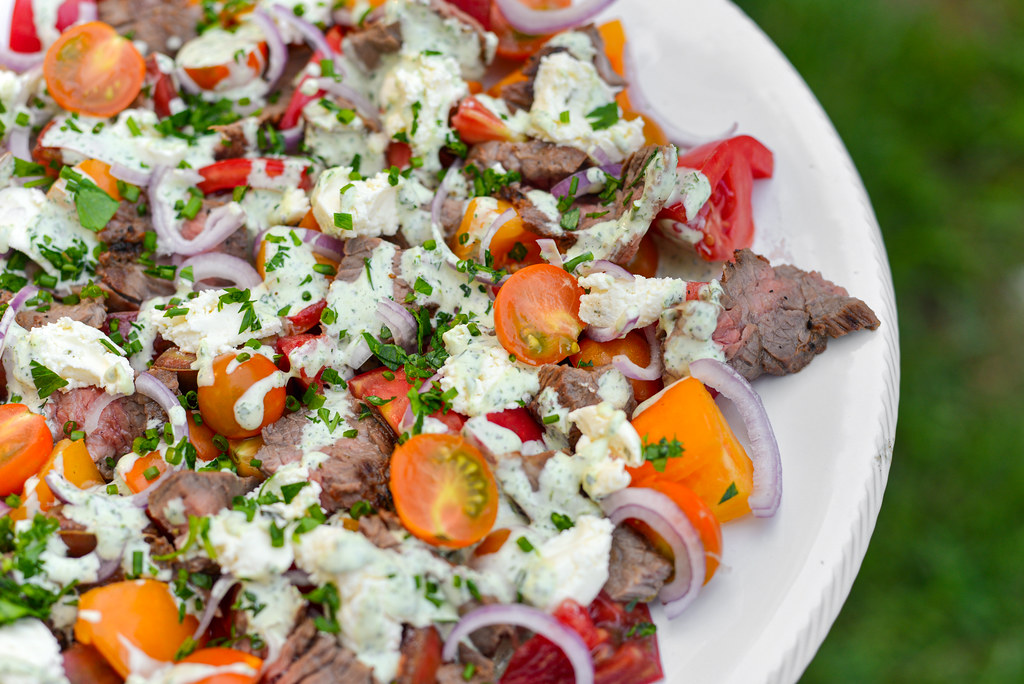 Sadly, the end of tomato season is upon us. There's likely just a week or two left to get the best, juiciest, and sweetness tomatoes you can until about 10 months from now when this magical time of year begins again. I decided I needed to really go for gold in this last dash to finish line, so decided to make a salad primarily of tomatoes. While at the farmer's market though, I kept grabbing more and more things to add to the dish and I ended up with this grilled skirt steak and tomato salad that was still very tomato centric, but was hearty enough to be an entire meal. 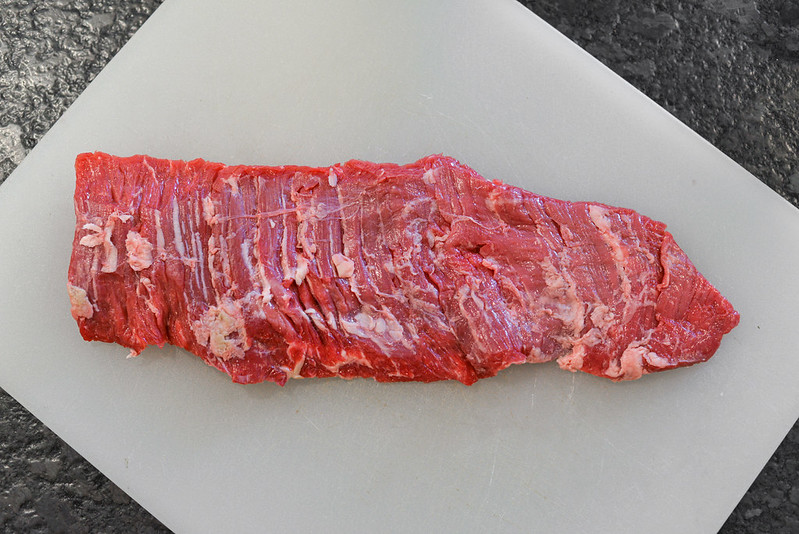 While tomatoes were the impetus to creating this recipe, let's start the post off with the steak. If you're a long time reader of this blog, it probably will come as no surprise I chose skirt here, which is one of my favorite cuts and my go-to for most all grilling recipes. This fibrous cut comes the diaphragm, has a super beefy flavor, and cooks best over very high heat, which makes it a prime steak for grilling. 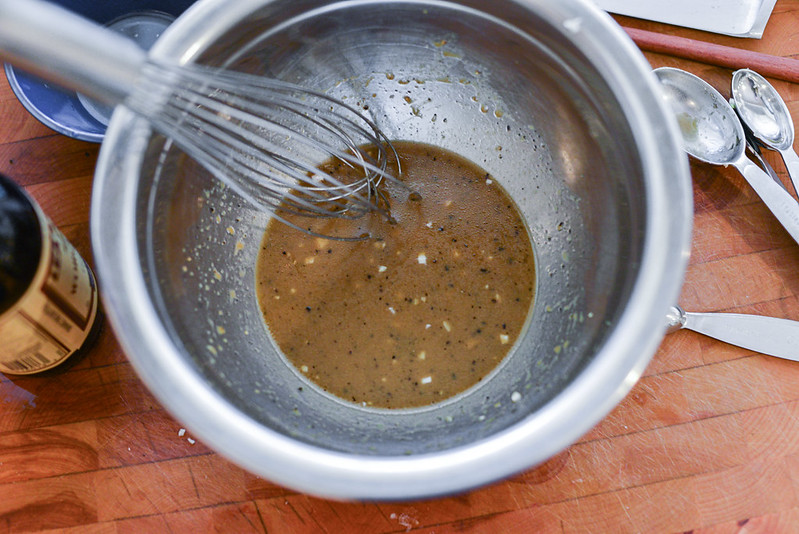 While the steak has a hefty flavor on its own, it felt right to give it a marinade that would make it meld into the salad even better. That lead me to create a sauce that was based off a somewhat standard salad dressing using olive oil whisked together with lemon juice, Dijon, and garlic. To make the marinade enhance the flavor of the meat even more, I chose to add in Worcestershire sauce, which provided the right savoriness, but something was still missing in my opinion, which I found out was dark brown sugar after adding a bit of that in. 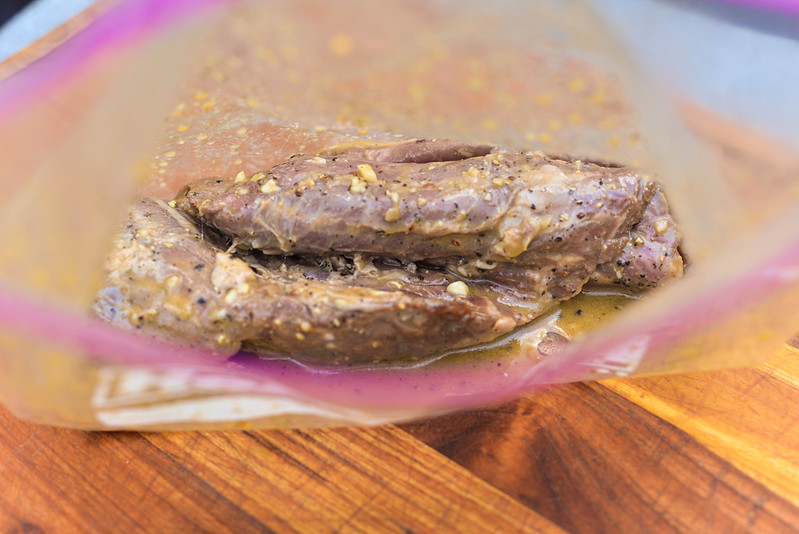 Once I was happy with the flavor, I put the piece of skirt in a Ziploc bag and poured in the marinade. I then set the bag in the fridge to marinate. This marinade isn't going to penetrate the meat all that much and was mainly designed to add seasoning to the exterior of the steak, so a long rest in the sauce isn't really needed and an hour will do you fine, although preparing this the day before and letting it marinade overnight wouldn't be a problem either. 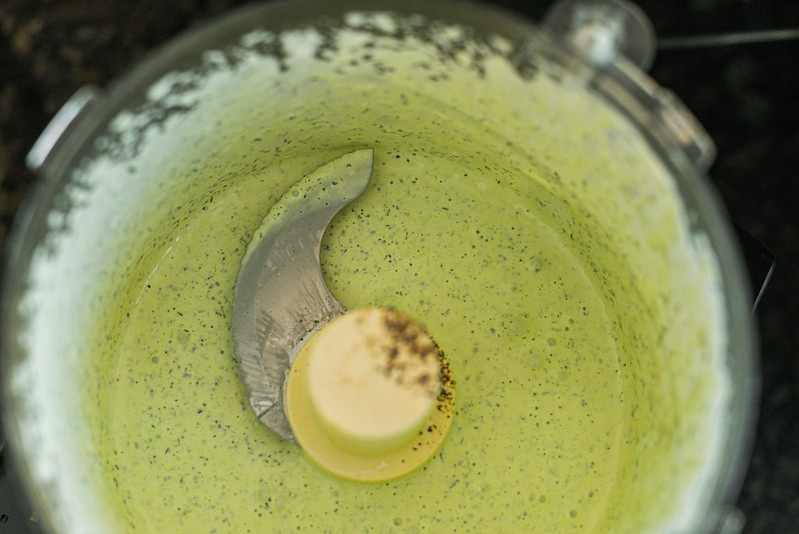 For the salad dressing, I used a standard green goddess recipe. I thought the brightness and oniony notes, along with its tanginess, would be a good pairing with the tomatoes and steak. While the green goddess dressing did require a bit of a longer list of ingredients over other routes I could have gone, putting it together was super easy because all I had to do was dump everything into the food processor and then pulse until the herbs were final chopped and the sauce evenly green throughout. Green goddess benefits from an hour or so in the fridge before use, during which time the flavors mellow and merge together and the dressing thickens up a tad too. 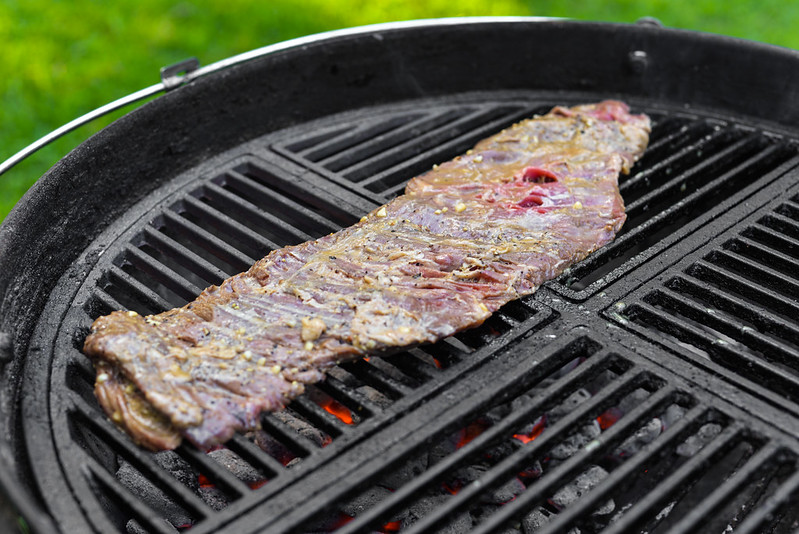 In the last half hour of resting for the steak and dressing, I got the fire going outside by lighting a full chimney of charcoal. Once completely lit, I pour the charcoal out, let the grill heat up, then got the steak on while the fire was still at its hottest. 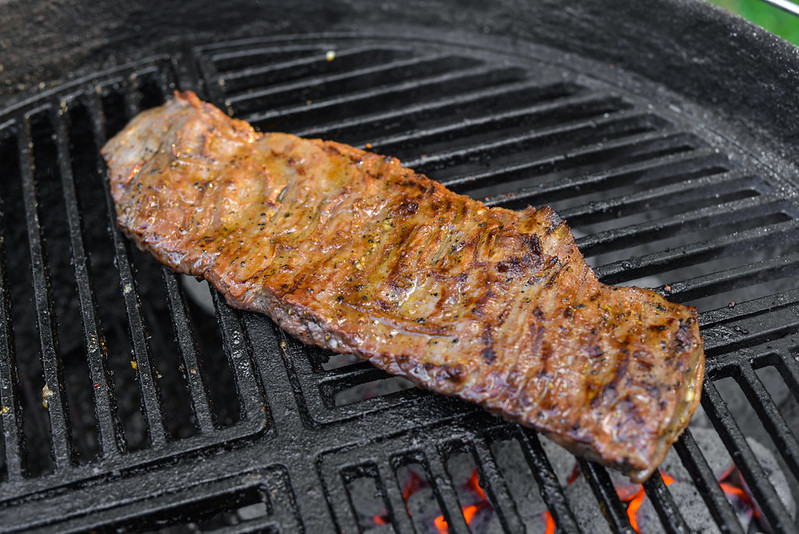 Skirt steak is best when it's very well seared on the outside, but still medium rare inside, and because the steak is so thin, it really takes some extreme heat to do this. You could make this recipe in a cast iron pan on the stove, but it still doesn't get as hot as a grill, and cooking a steak like this indoors can fill your kitchen up with smoke. I personally cook skirt streak to feel, knowing how soft it should be when prodded with tongs based on years of experience, but I recommend you grab your instant read thermometer and test the internal temperature at the thickest point and pull the steak off when it hits 125°F, transfer it to a cutting board, and let it rest for five to then minutes. 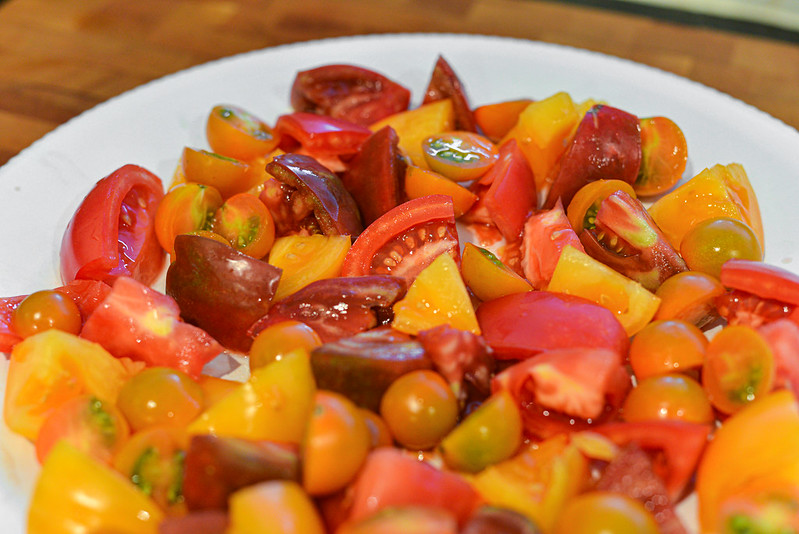 During the resting period is a good time to prepare the tomatoes, which should be a quick proposition. I grabbed a variety of colors and breeds from the market, which I diced into roughly one-inch chunks and spread across a large serving platter. 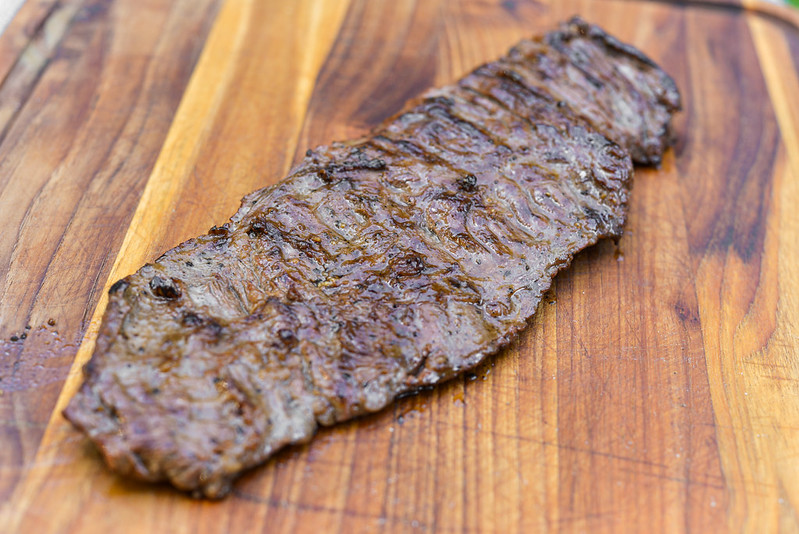 Once the steak was done resting, I cut it into two to three inch portions with the grain, then cut those pieces against the grain into 1/2-inch strips to create tender, bite-sized pieces. I nestled those steak strips in the valleys between the tomatoes and sprinkled on thin slices of shallots. Next I added dollops of a soft, fresh chive-laded cow's milk cheese throughout the salad. This particular cheese came from my favorite local cheesemakers, Boxcar, but I would say the closest thing you'll find at your grocery is Boursin. After the cheese, I spooned on the dressing, and finally garnished with chives and parsley, which I had leftover from making the dressing. 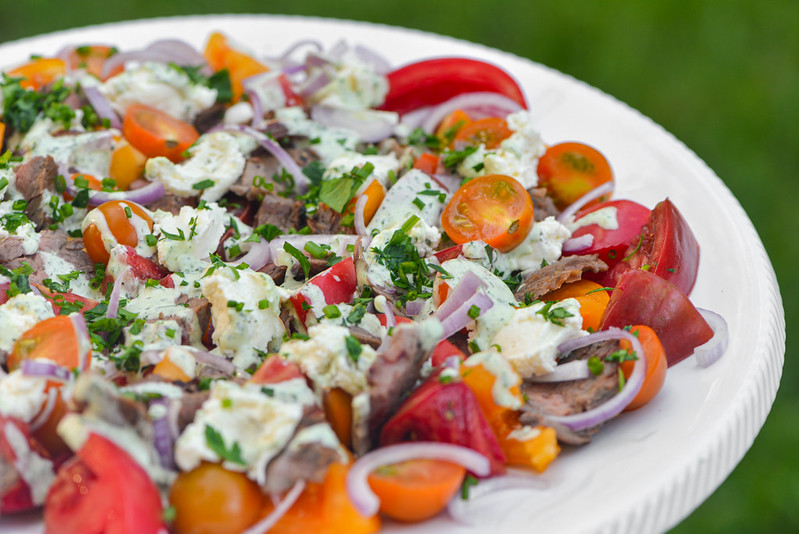 I know steak and potatoes are the natural pairing, but this salad may just leave you realizing it's really steak and tomatoes that are the more perfect partners. Where potatoes add heaviness on top of heaviness, the tomatoes added a contrasting fresh, light, and sweet flavor to the hearty steak. That marinade really came through on that steak too, making it taste extra savory with a bit of mustardy bite that shined through against the herbal dressing, cheese, and crispy shallots. Taken altogether with the myriad of summer flavors and use of the grill, this felt like a very appropriate way to say farewell to tomato season, with the prime grilling seasoning following shortly behind that.