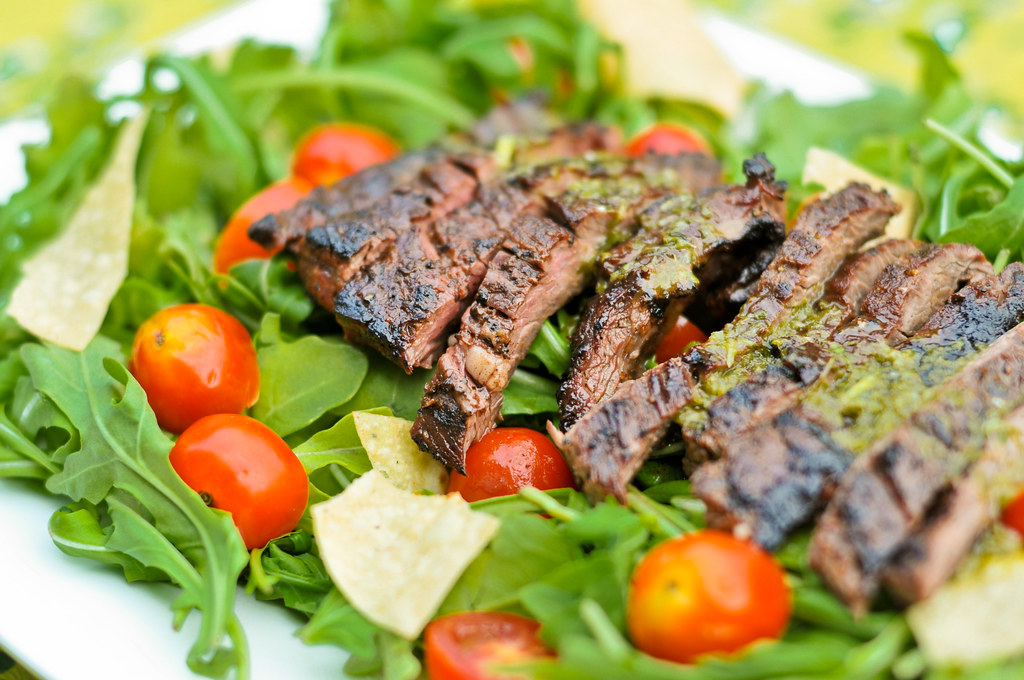 From time to time I let my neurotic tendencies take aim on my weight. Sure, from the outside I may look like the skinny guy in the world of barbecue, but I've been on an upward trend for many years, only finding downward momentum when my brain decides that the scale finally reads higher than acceptable and uses all of its power to reverse the expansion until fully placated. I'm currently in one of those periods of my life, and I'm happy to report I've done better than normal and will most likely resume full gluttony shortly. While I've found that trying to change my diet is a loosing battle—most loss comes from portion control—I can trick myself into the occasional "healthy" meal by making it something I cannot resist, like this skirt steak salad with a cilantro-lime dressing. 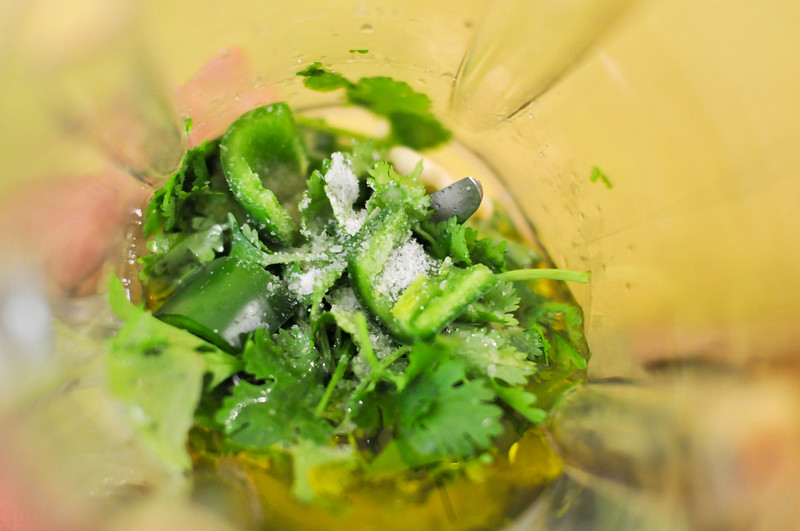 My problem with healthy eating, especially salad, is that I often feel so unfulfilled—in terms of flavor and ability to render me full—in the end that I often end up snaking shortly after to bring a sense of closure to the meal. The only way I've found to avoid this is make the salad full of things I find truly irresistible, which usually leads to a Tex-Mex influence—my favorite cuisine, up there with barbecue.

For this salad I started with a cilantro-lime dressing, with an added jalapeno for the heat I love. This simple dressing hits a lot of prime flavors that I really love. 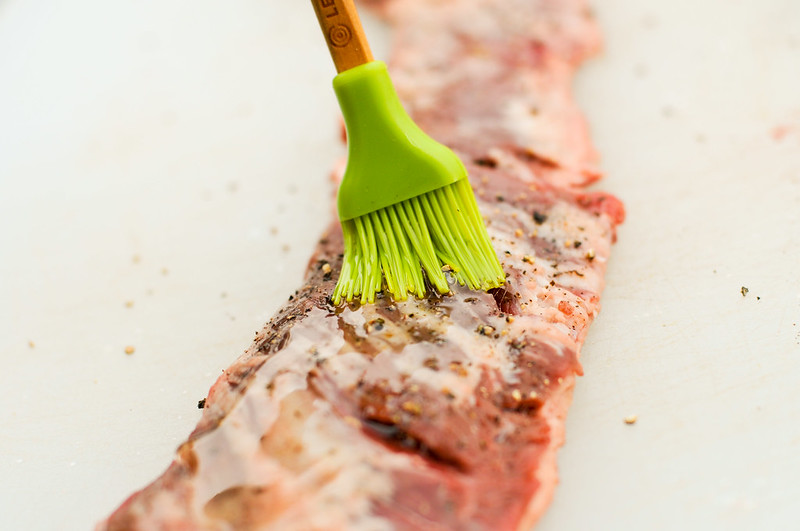 Next I added in a protein, in the form of the best steak of all—skirt. With the dressing and other salad accompaniments, I saw no need to do anything fancy with this skirt, I just started it with the required heavy coating of salt and pepper, followed by a brush of olive oil. 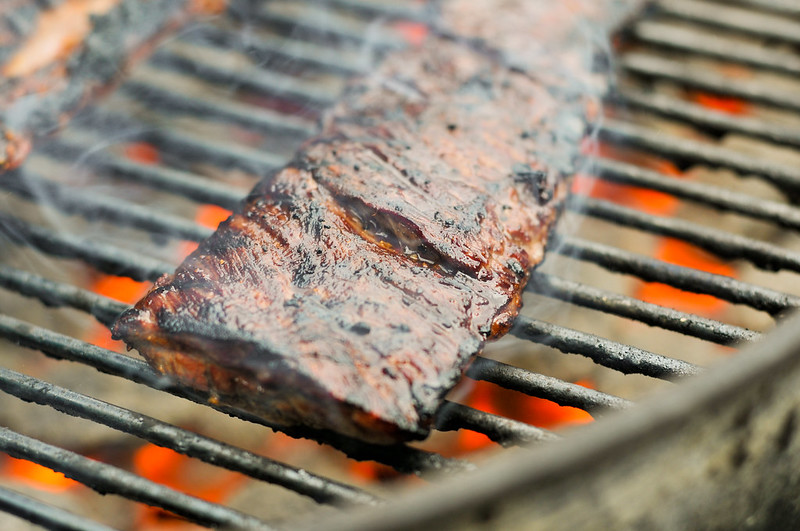 Then the high heat of the grill made the steak as good as it can be. Searing quickly on both sides, a deep crust developed, while the meat stayed a beautiful medium to medium-rare inside. 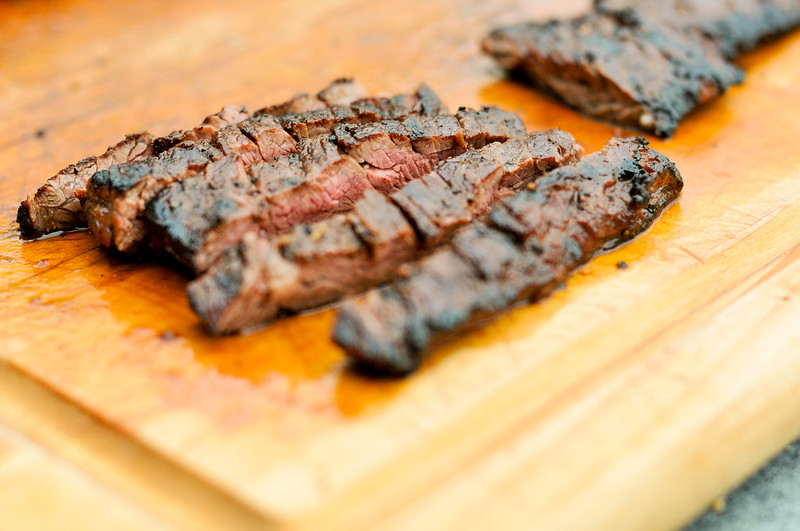 After a rest, I sliced the steak into the required cut to make skirt tender—cut into 3 to 4-inch portions with the grain, then thinly sliced against the grain. 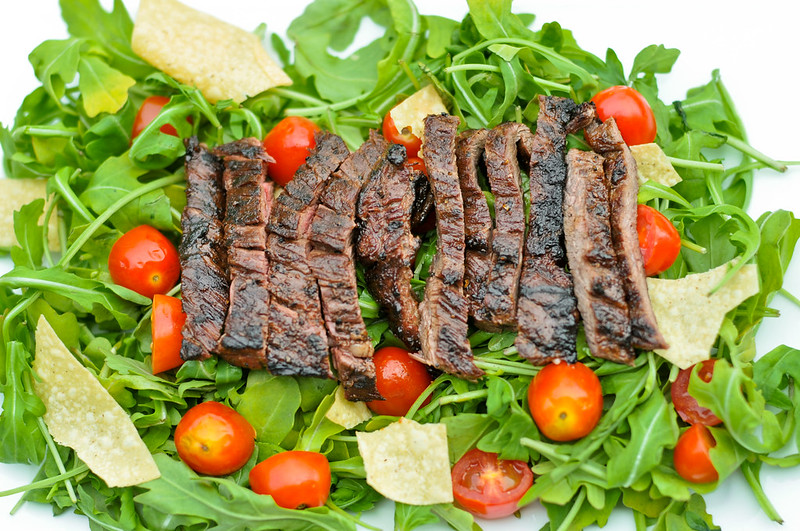 Finally, I laid the steak on top of a bed of arugula, added some cherry tomatoes, crushed tortilla chips, and dressed it with the cilantro-lime vinaigrette. There is not one piece of this salad I don't love on its own, but put all together and I had one "healthy" dinner I can totally stand behind. Everything in here is a powerhouse of flavor, from the beefy skirt, to the peppery arugula, and fresh and spicy dressing. The best part is they all play off each other to create a very cohesive salad. In the end I was happy, full, and satisfied that I not enjoyed the meal, but it most likely aided in my goal of shedding some pounds, which just means I'm that much closer to going back to a more ideal life almost devoid of salad.