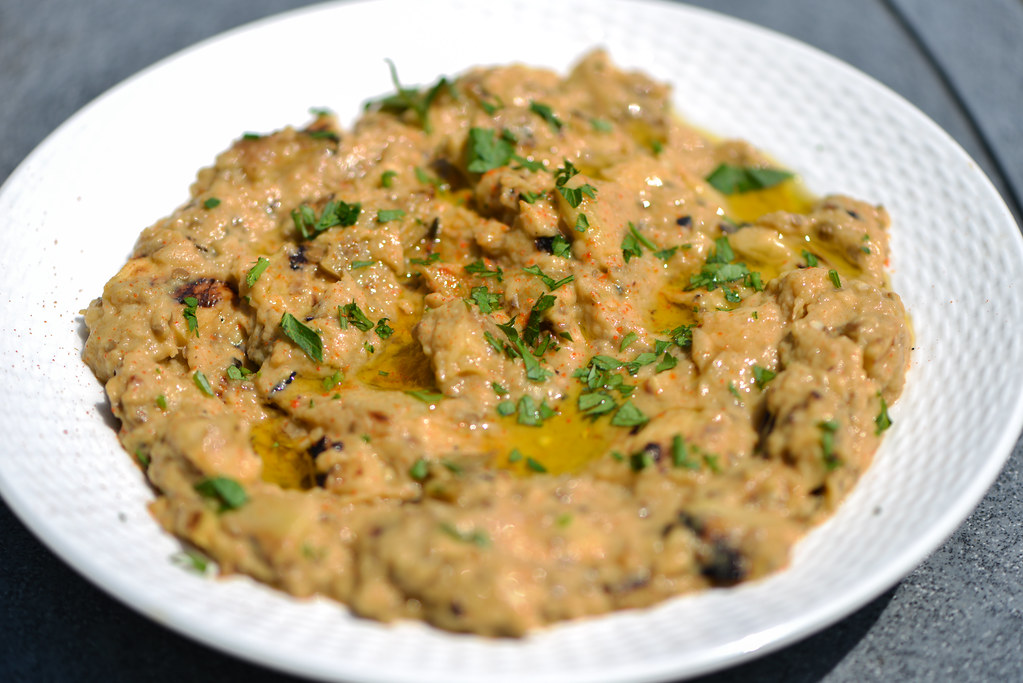 While in Southern Spain last spring, I came across a baba ghanoush in a Moroccan restaurant that was so starkly different than what I make that it ignited a desire to try to put together something similar as soon as I got home. It took me a few years to get a baba ghanoush recipe I really loved, and since then, I haven't changed a thing, but this new variation challenged me to rethink how to put together this smoky eggplant dip. My recipe was smooth, this dip was chunky. My recipe was mellow, this had a kick of heat to it. My recipe was thick and creamy, this one was thinner and oily (in a good way). So I had my work cut out for me, but I was up to the task and this spicy and chunky baba ghanoush is what came out of it. 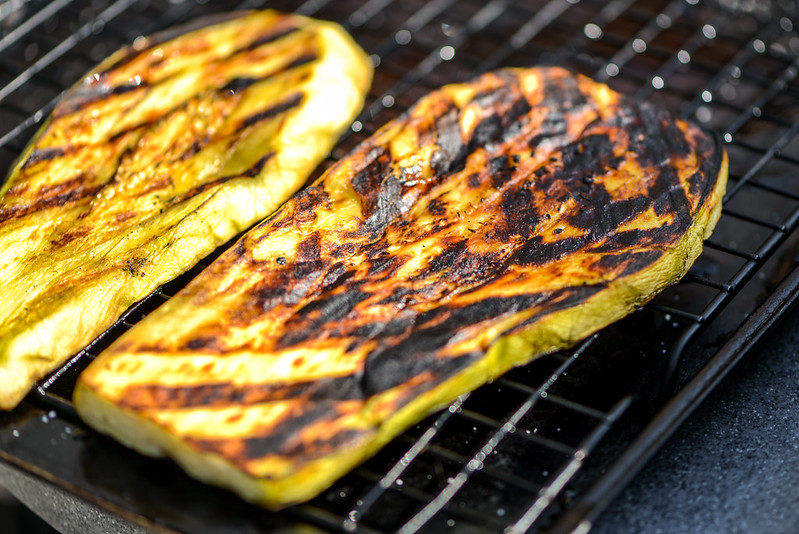 One of the most noticeably differences right off the bat was this particular dip had both a smooth eggplant base, as well as soft and squishy chunks of eggplant to add a lot of texture. To strike this balance between smooth and chunky, I picked up two eggplants and prepared them both in different ways.

With the first, I peeled the eggplant and then sliced it into strips lengthwise about 1/2-inch thick. I seasoned the eggplant slices and grilled them over direct heat until well browned on on the outside, and soft—but not falling apart soft—on the inside. Once cooled, I roughly diced these eggplant slices. 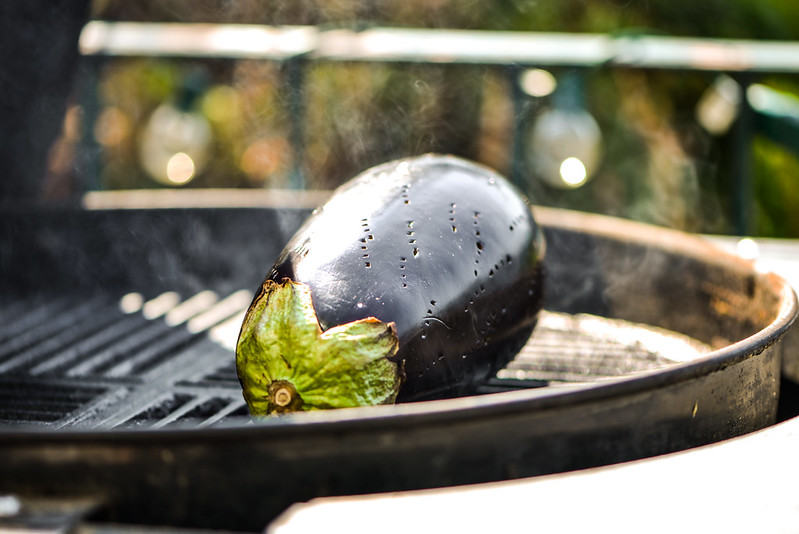 I gave the second eggplant the more traditional baba ghanoush preparation. This started with piercing the skin of the eggplant all over with fork to allow moisture to escape during cooking. 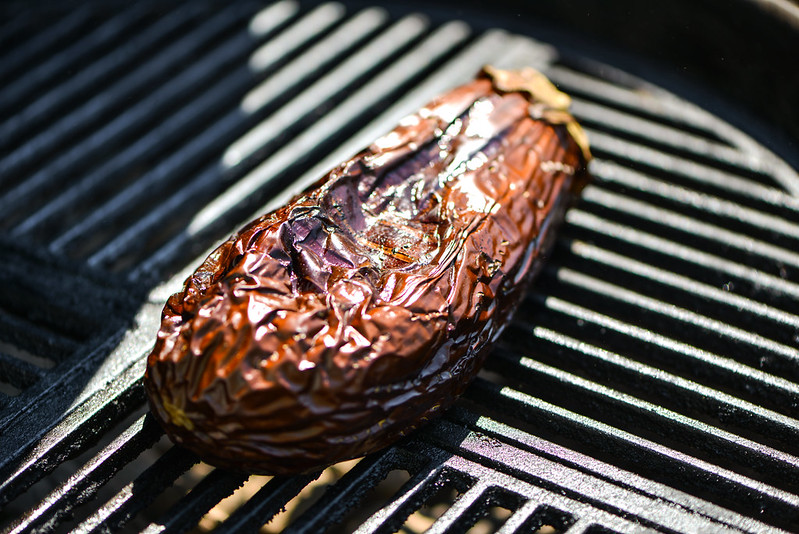 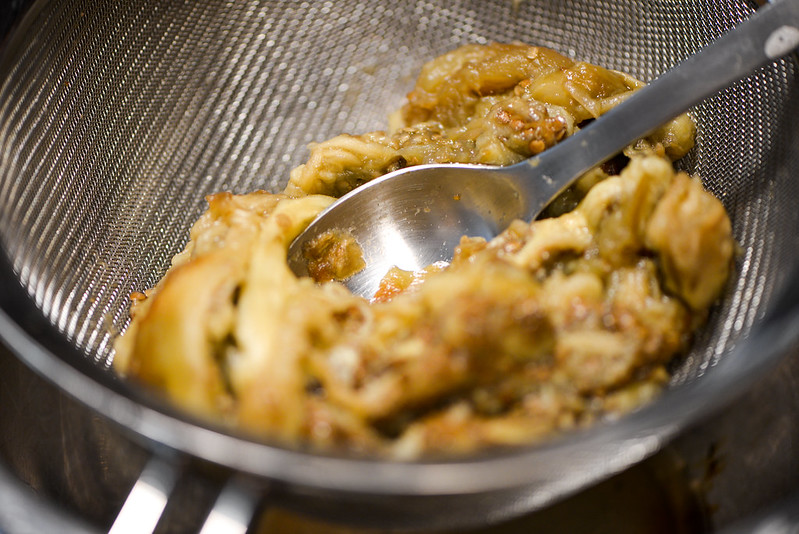 Once cooled slightly, I was able to slice the eggplant open, scoop out the pulp, and let it drain in a fine mesh strainer for five minutes. This not only relives the eggplant of excess moisture, but also drains away a bit of the bitterness that is occasionally associated with eggplant as well. 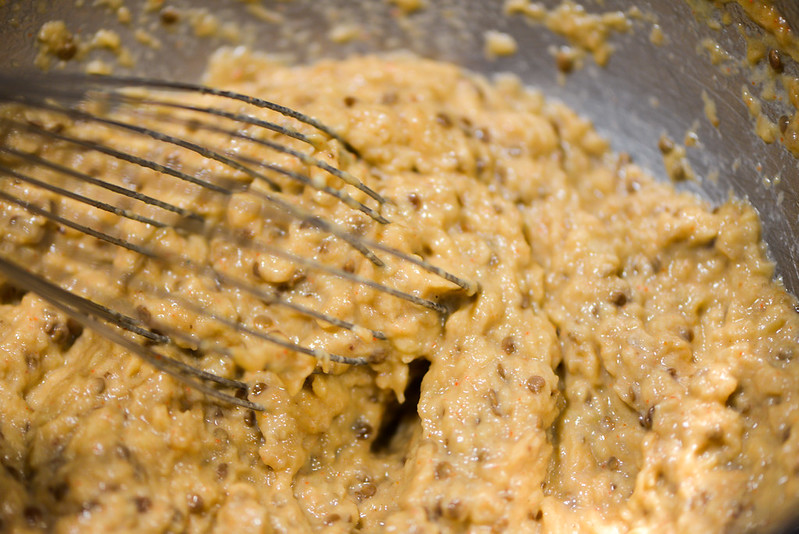 Next I transferred the pulp to a large bowl and mashed it with a whisk until smoothed out with a little texture remaining. Then I mixed it more extra-virgin olive oil than I would normally think would be necessary, as well as tahini, hot paprika, garlic, and cumin. Once mixed together, I folded in the reserved diced eggplant and the dip was just about done. 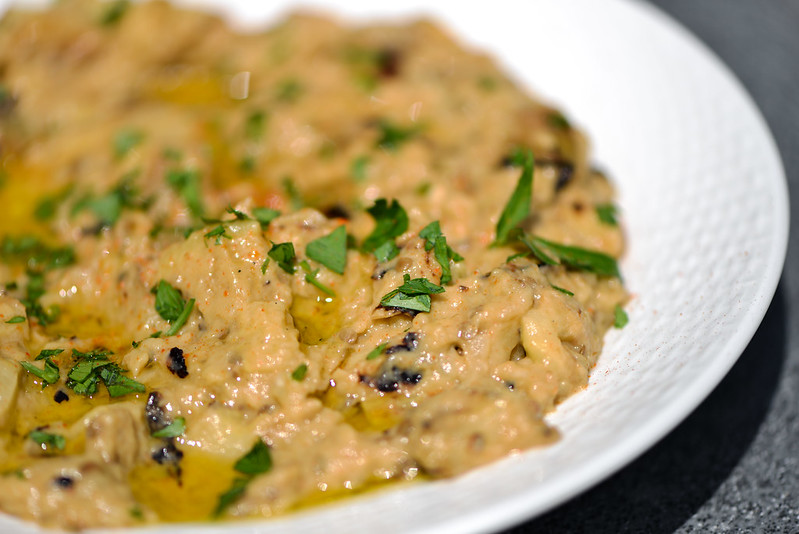 After an hours rest in the refrigerator, I was rewarded the spicy, chunky, creamy, smoky, and earthy baba ghanoush I wanted. It was definitely different the standard eggplant dip that I purée to super smooth in the food processor—this one had a more complex flavor and texture that created a challenge from the norm that I think is great is so many ways.