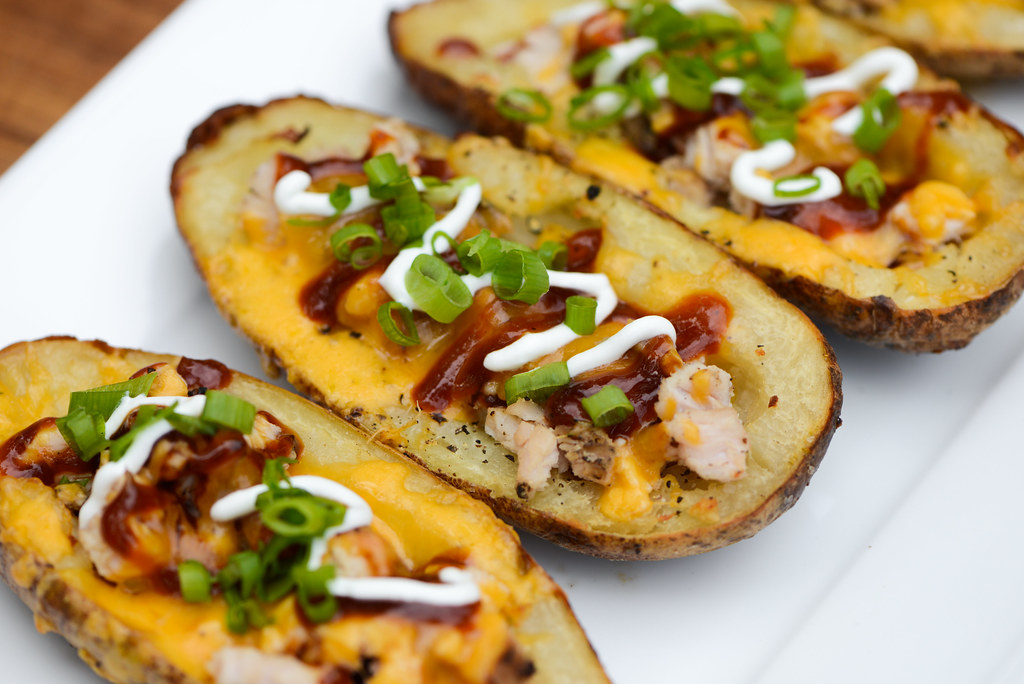 I'll wager a good bet that come next Friday, you'll have a whole mess of turkey leftovers you need to find something to do with. I personally can usually only handle reheated plain turkey once—let's face it, it's never as good reheated and there are only so many sub-standard meals I can willing prepare for myself. That leaves me finding ways to reuse those leftovers in forms that are more exciting and delicious, such as in sandwiches, salads, and the like. While it wasn't a Thanksgiving bird, I did find myself with a generous amount of leftover Texas-style smoked turkey a few weeks ago, and I really don't think I could have put it to better use than in these smoked turkey stuffed potato skins. 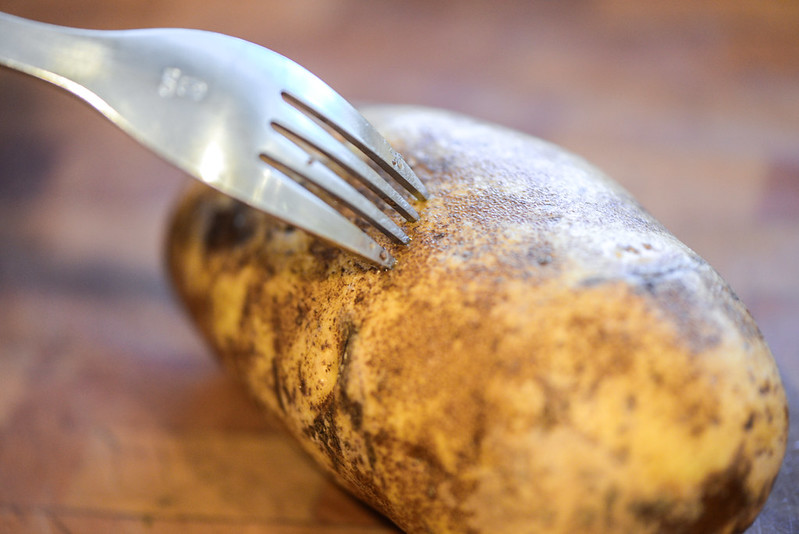 My first inclination for that turkey was actually as a topper for baked potatoes, but then I remember this potato skin procedure I picked up from Cooks Illustrated that makes spuds that are far superior to ones that are solely baked. The one fallback here is that the potatoes do need to be roasted throughout before transforming them into skins, a process that can take up to an hour, which is easily an entire batch of charcoal. 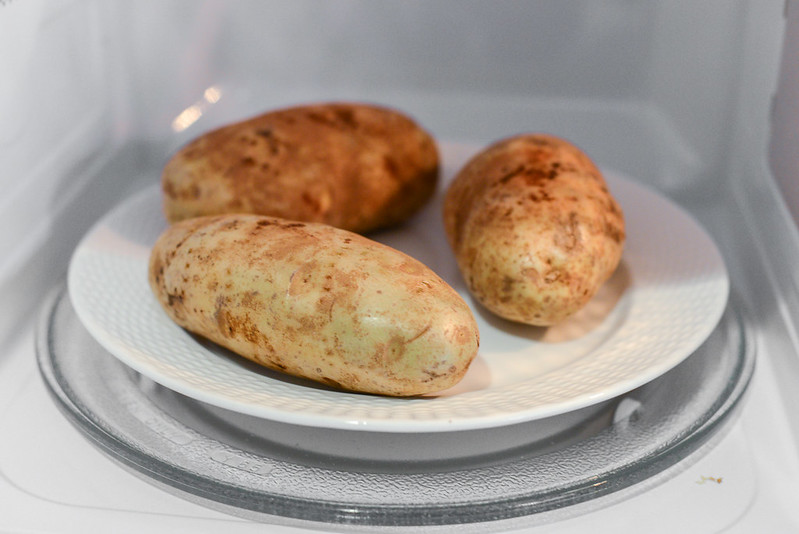 So to speed things up and get the skins to the finish line utilizing just a single chimney of lit coals, I employed the microwave to give the potatoes a head start on cooking. This began with pricking the potatoes all over with a fork, then nuking them on high for eight minutes, flipping them halfway through. 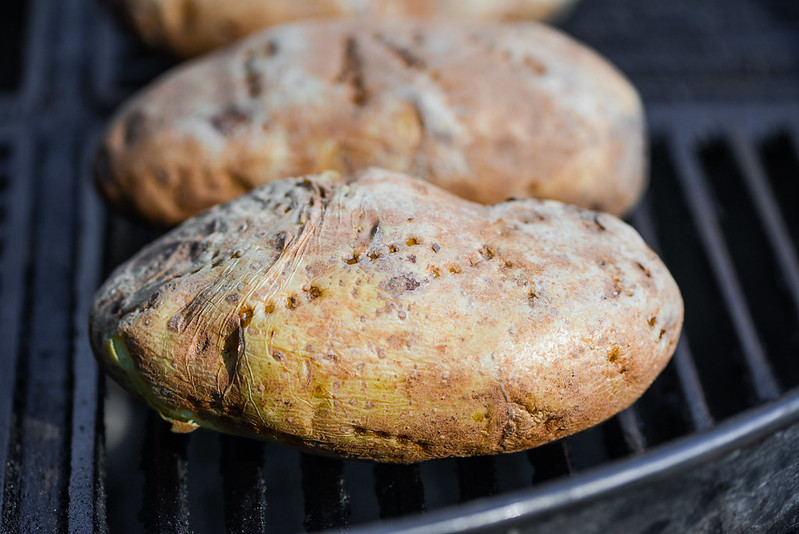 Fully microwave-cooked potatoes don't get that desirable dried out, brittle skin though, so to achieve that, I finished up the cook on the grill. With these partially cooked spuds, it only took 20 minutes for them to roast through completely—I tested doneness by seeing if a paring knife slid through the entire flesh with no resistance. 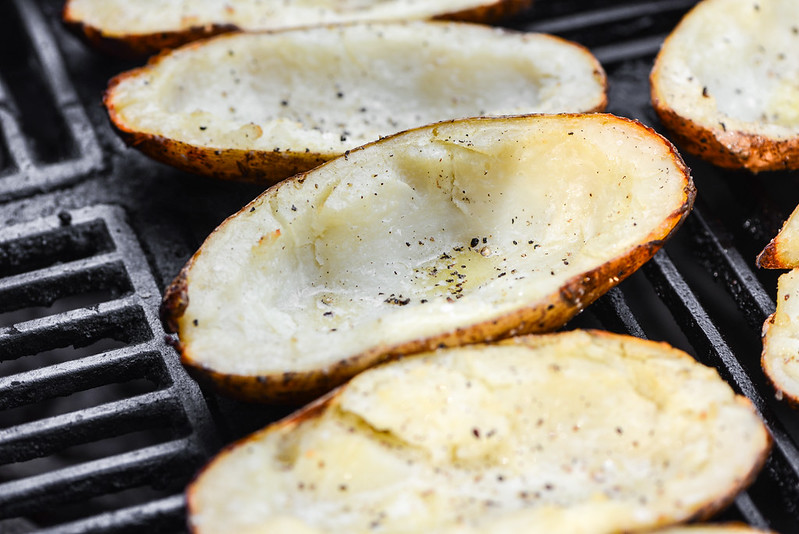 Once done, I split each potato and let cool just enough to handle. Then I scooped out the center of each half with a spoon, leaving about half an inch of flesh remaining intact. Next I brushed each potato all over with butter and seasoned with salt and pepper before placing them back on the grill, over indirect heat, and covering. I let the skins cook this time until until they began to brown and crisp, which took about 7 minutes. 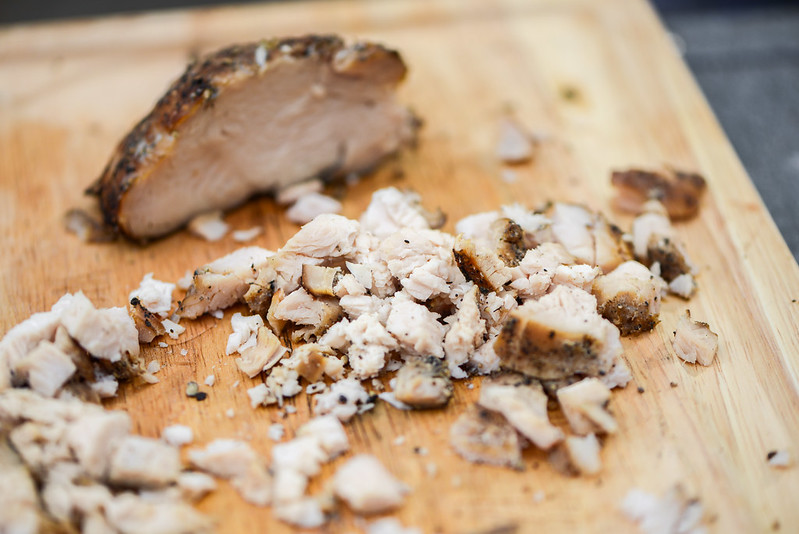 While they were cooking, I took out my leftover turkey and diced it up in preparation for stuffing. 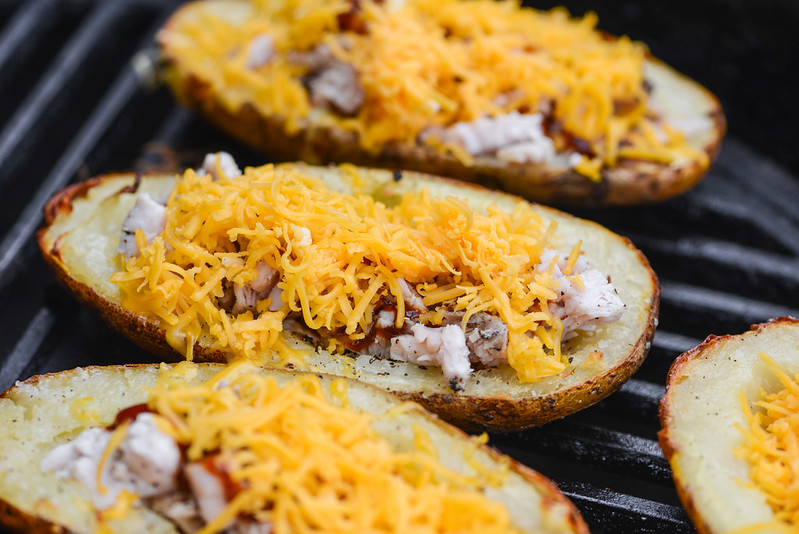 I then piled a heaping helping of turkey into the bowl of each spud and squeezed on some barbecue sauce followed by a generous sprinkling of sharp cheddar cheese. 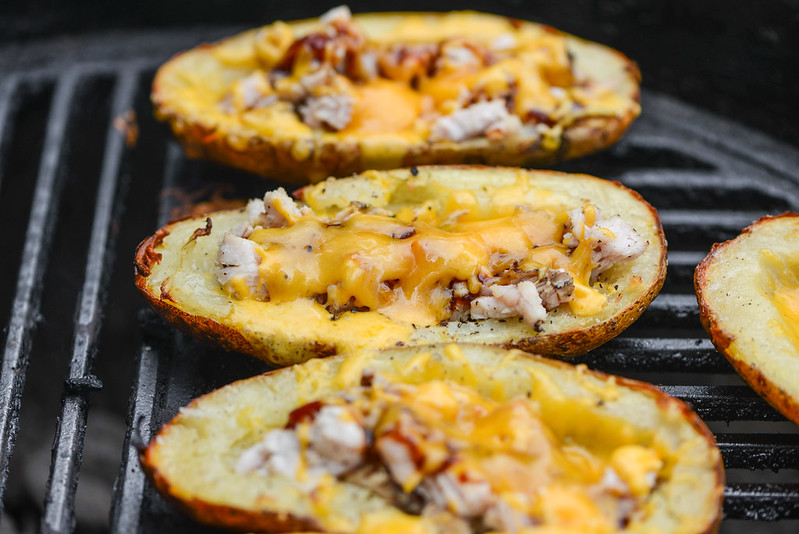 After all were stuffed, I covered the grill again and let the potato skins cook until the cheese was completely melted and started to bubble a bit around the edges. 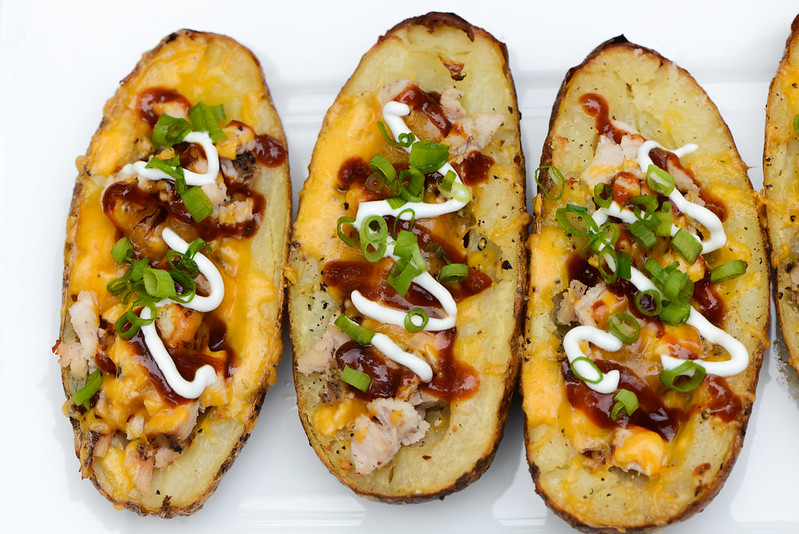 To finish the skins off, I gave each another squeeze of barbecue sauce, a bit of sour cream, and some scallions. It had been a while since I last made potato skins with this method and forgot how amazingly awesome they are. One of my guests mentioned that these are how you always wish potato skins tasted in the restaurant—crisp and buttery with enough flesh to give them substantialness as well. The perfect vessel was made even better with the moist, smokey turkey along with the barbecue sauce, cheese, and sour cream combo that worked together in harmony to give the potato skins a great flavor. I may still go back and do the turkey stuffed baked potatoes I originally had in mind, but I'll bet when I do, I'll just wish I had made these skins again.