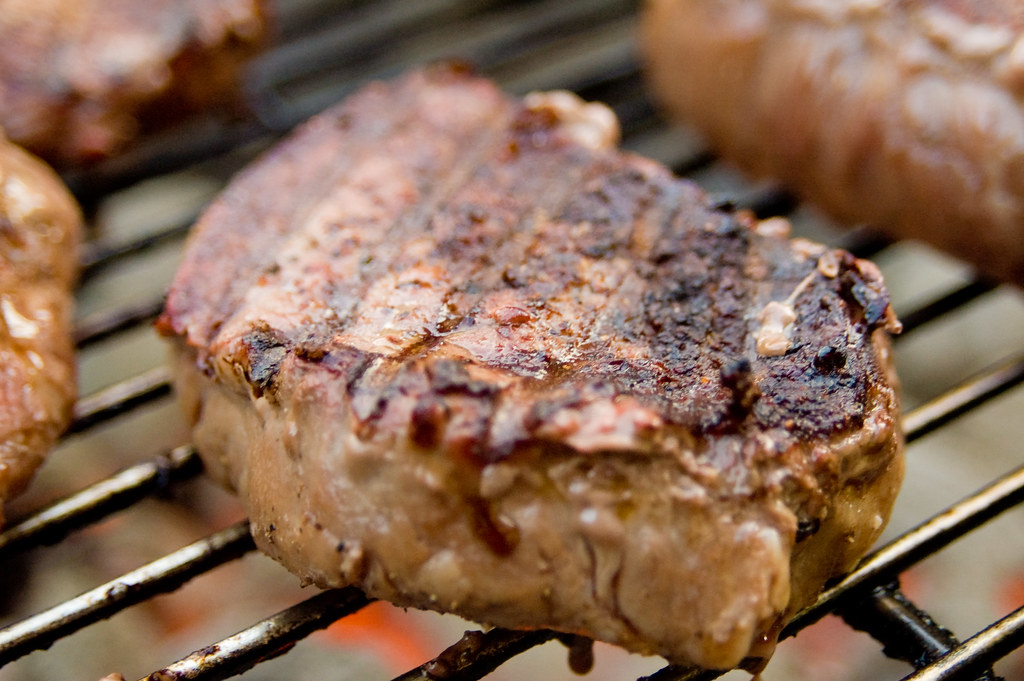 Having a reputation as a Meatmaster can have definite advantages. After Meatwaver Marissa instructed her father in the ways of the Meatwave, he promptly went online and submitted an order for a shipment of meat to be delivered to her, which ended up being a new bounty of meat that she decided to share with me. Ordering meat online totally confounds me. No matter if I'm at the butcher or a supermarket, I always end up looking at many, many (sometimes all) pieces of meat on hand before settling on the one that will make the journey home with me. The inability to inspect your meat before purchasing seems like you're just asking for trouble, but I do know people (including my mother) who swear by Omaha Steaks, so I was actually excited to hear about this order headed our way so I can see first hand how the mail makes meat that much more delicious. 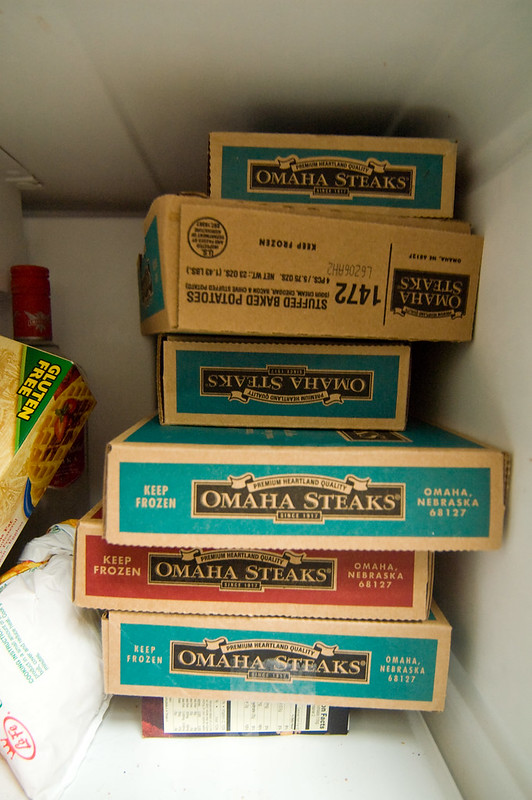 Marissa's father didn't hold back on his ordering, which tends to always happen to me too when I'm ordering anything online. A stryrofoam case arrived on the doorstep that had all of the following packed in dry ice: 4 top sirloin steaks, 4 pork loin chops, 4 chicken breasts, 4 fillets of stuffed sole, hot dogs, and stuffed baked potatoes. A true feast if I've ever seen one, but in order to keep the meaty goodness going for as long as possible, we started with just one item, the top sirloin steaks. 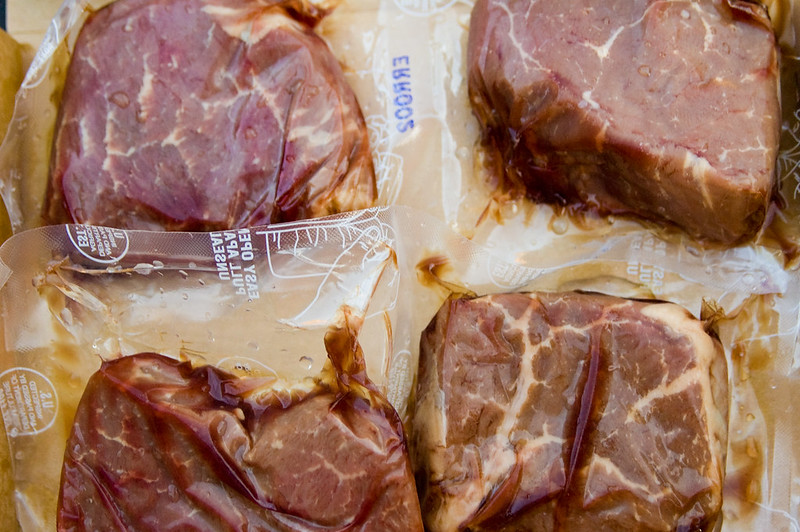 The steaks came individually vacuumed packed, each perfectly one portion. I can definitely see the attraction of having such a convince just laying around in your freezer, especially if you're only cooking for one. This makes steak a very easy and quick meal to cook any given night. I was cooking for 4, so I let all of the steaks defrost in the fridge for about 24 hours, which worked great on two of the steaks, while the other 2 needed some extra time in cold running water to get them all of the way there. 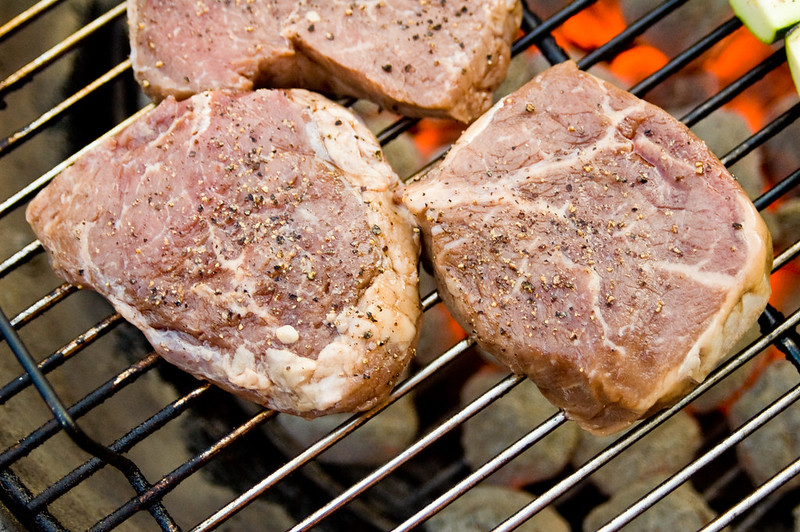 Once the steaks were defrosted, I opened the vacuum seals and gave each side some salt and pepper and let them sit out to come up to room temperature while I prepared the grill. The steaks were fist size, about 3 inches diameter and 1 1/2 inches tall. This size steak is great for grilling, they don't cook too quickly, giving more time to monitor doneness and develop a good sear. For this reason, I suggest this size of steak for newbies at steak cookery. 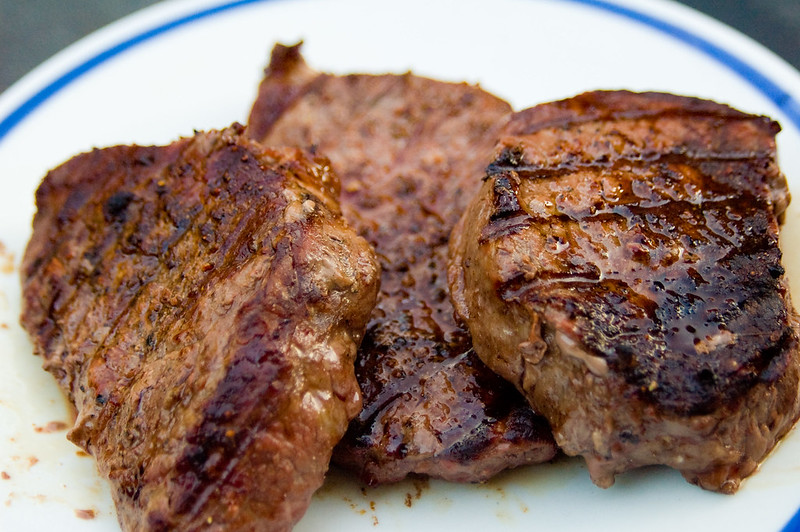 I had 2 orders for medium, 1 medium-well, and a medium rare to rare for myself. These steaks were a snap to cook to order, a simple push on the meat to feel the tenderness was all I needed to gauge their current state, while I often find myself needing a thermometer for thinner or thicker cuts to get steak cooked correctly. After pulling them off the grill I let them sit, covered in foil, for 15 minutes in order to let the juices redistribute. 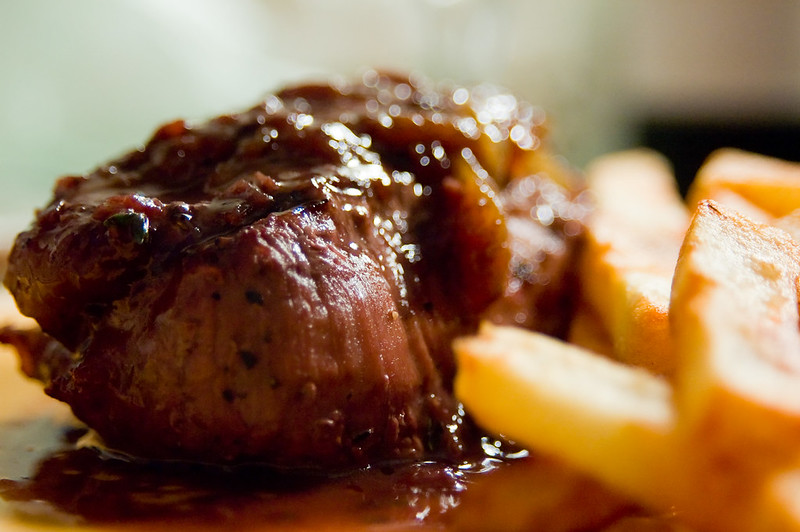 I was cooking these steaks impress, since I wanted to make sure Marissa made a good choice in entrusting her meat with me. Steak with salt and pepper is usually fine enough by itself, but I served these with caramelized onions and a red wine sauce. Normally for a sauce I'd cook the steaks in a skillet and build the sauce using the leftover browned bits, but that's not grilling, so that's not The Meatwave. Instead I just used the browned bits of the caramelized onions and the accumulated juices from the resting steaks and ended up with a sauce just as tasty as any others I've made before.

So the final meat verdict? I'm still sticking with the butcher. Although the flavor of the steaks were just fine, some had too much fat for a quick sear sirloin and ended up a little on the chewy side, which could be avoided by picking out my own steaks to inspect the fat marbling first hand. The steaks cooked medium and medium were all well received, but my medium rare was not as juicy (bloody) as I usually expect. I don't know if this is a result of the freshness or the quality of Omaha Steaks, but not knowing why bothers me and is hard to ascertain with mail order steak. From all the cuts of meat Marissa received, I think steak is probably the most important to pick out yourself at a butcher, and knowing that, I'm still keeping my hopes up that the pork and chicken might lead me to mail-order-meat enlightenment.