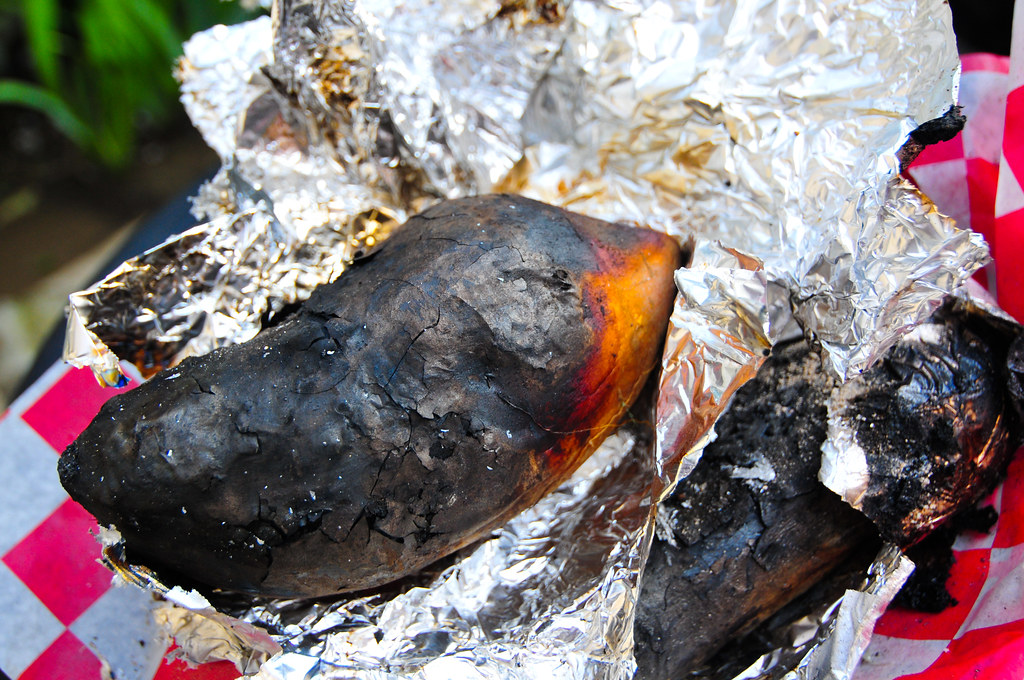 Nothing like an ashy yam turd to get my mouth watering! What's that? You've never heard of an ashy yam turd and it sounds disgusting? Well, fine, then call it by its other fancy-pants name, ember-roasted sweet potato, but don't let me catch you muttering that phrase around these parts. These spuds have a long and steeped tradition at the Meatwave, and an ashy yam turd by any other name just is not an ashy yam turd. So how did this seemingly vile name become associated with such a delectable dish? Let's take a short walk down Meatwave memory lane... 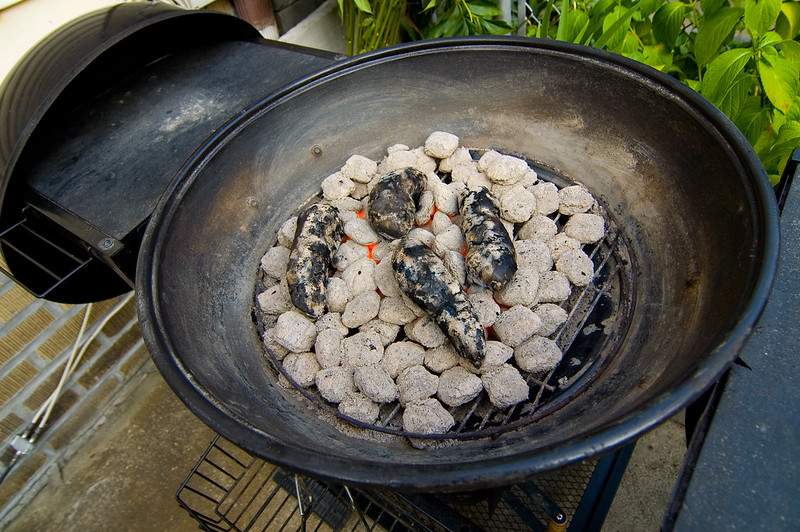 Now I'm not calling Meatwaver Pete a turd, but if there was any man who'd be the catalyst to the invention of the ashy yam turd, it'd be him. Way back in the Meatwave's formative days, Pete had brought a satchel full of wonderful yellow yams to the Voyage of the Meatflower. Not quite knowing what to do with them, we just threw them into the coals and let 'em go. 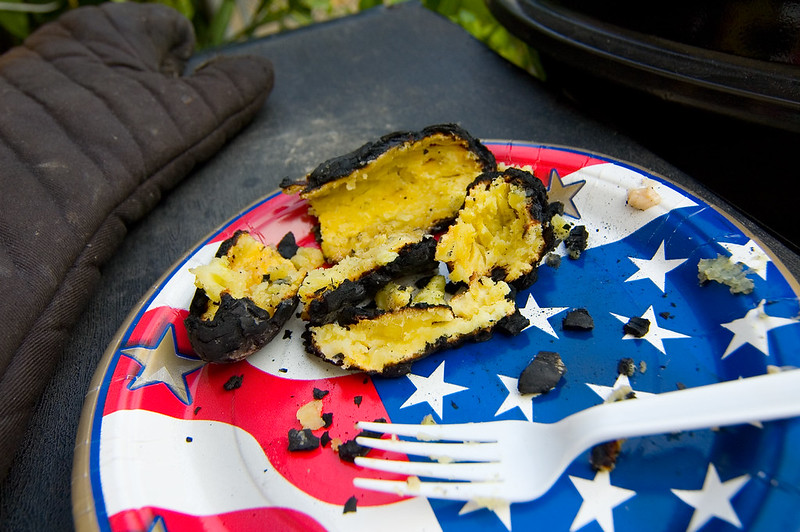 What came out about an hour later could be described as nothing else except an "ashy yam turd." Burnt to a crisp and covered with a fine gray layer of ash, the name was only fitting. When cracked opened, whatever wasn't brunt was wonderfully soft and flavorful, and we knew immediately that the mixture of a totally awesome name and a delicious tater would make this destined to be a Meatwave staple. 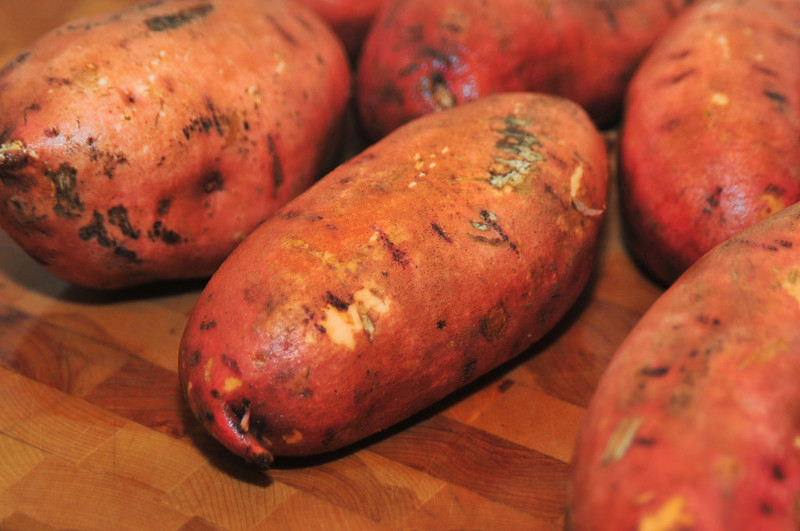 With time came refinements to the ashy yam turd. First, although the yellow yams are quite excellent, these have always been made with the more common orange sweet potato since. This is really just a matter of convenience, as the local grocery always has a nice stock of the orange spuds, while the other colors tend to only pop-up around the fall. 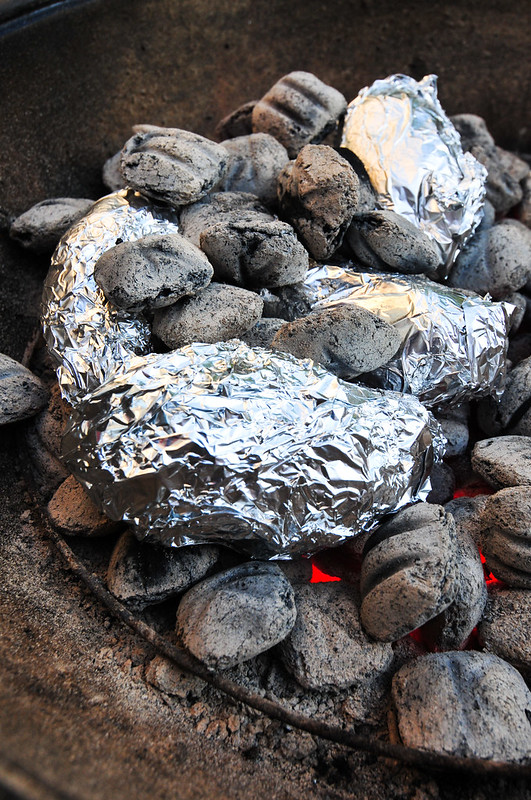 Second, we needed to get rid of all that crust that became nothing but waste. To alleviate this particular problem, we started wrapping the potatoes in foil, which was sufficient to produce a much better ratio between outer crust and edible innards. We also began burying the potatoes more fully in the coals, which helped with even cooking and required less maintenance during the roast. 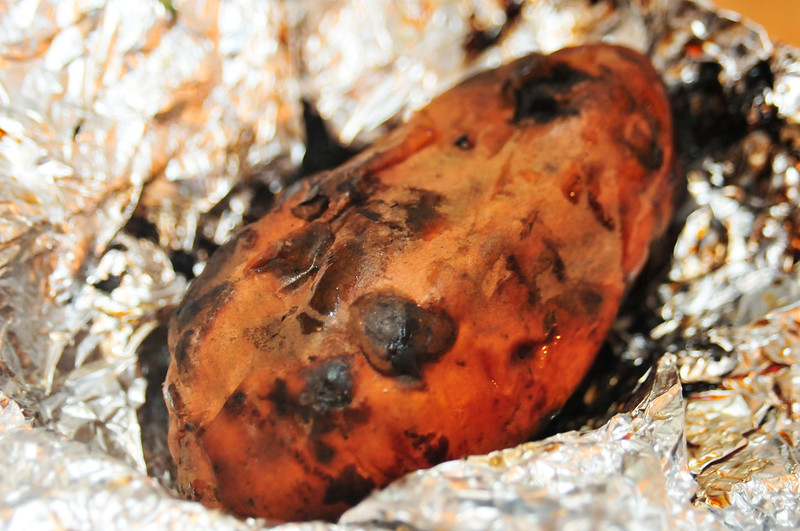 As you may have guessed, the foiled spuds produced a specimen that looks less like an ashy yam turd and more like a perfectly roasted sweet potato. This is of little importance to our terminology—the moniker "ashy yam turd" was already so ingrained in our collective conscious that calling it anything else would be considered sacrilege. 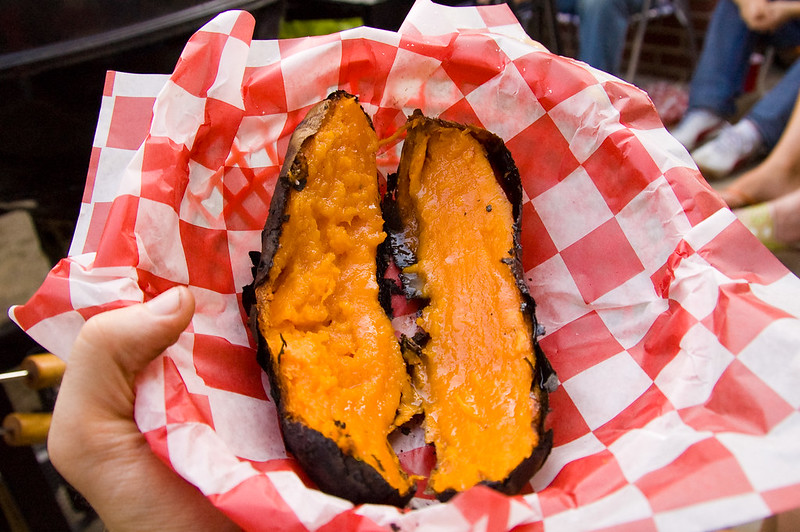 Finally, our years of ashy yam turding have left us with this—an incredibly soft, velvety interior that makes a truly perfect sweet potato. We've also come to enjoy these topped with a maple cinnamon butter—a tip I picked up from the ever prolific Steven Raichlen.

So there you have it, the ashy yam turd in all of its glory. If there was ever something not-meat related that the Meatwave could fully stand behind, it's this—a spud we've put our whole ass into perfecting, with a name that probably could only have been coined by us. Just thinking about them is bringing on a strong craving...god, I love me an ashy yam turd.

Adapted from How to Grill by Steven Raichlen 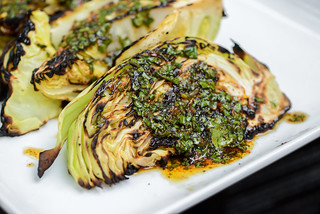