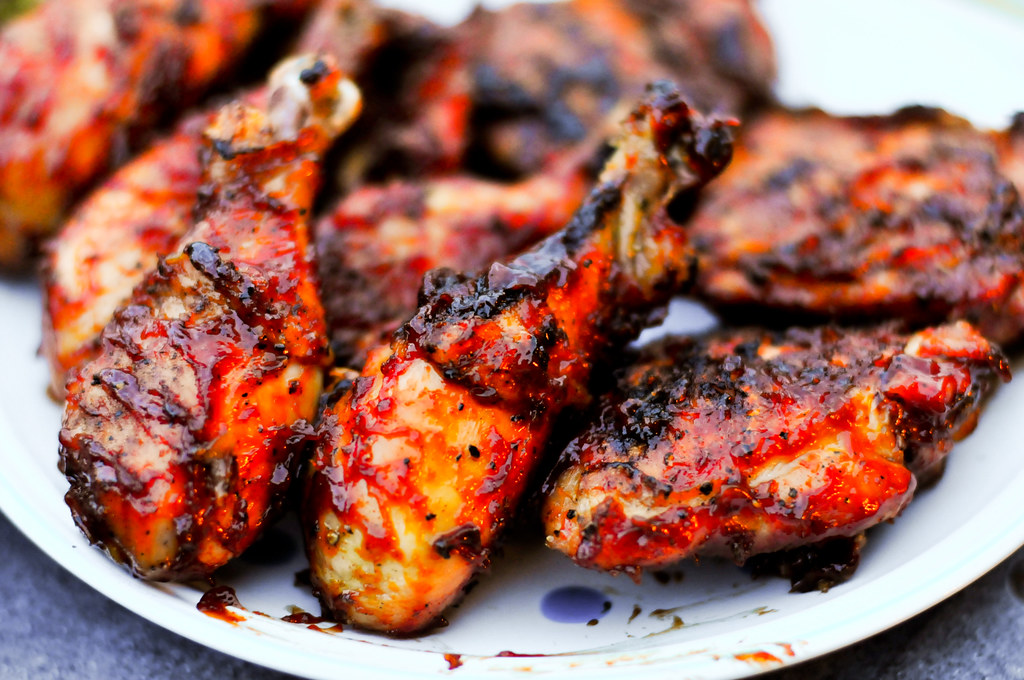 Oh, barbecue chicken, what a conundrum. First, it's primarily grilled and not barbecued, so the whole thing gets off on the wrong foot. Second, it's just usually not very good. Chicken marinated in sauce or slathered before being put on the grill seals an unnecessary ill fate for the bird, rendering a mostly burnt result. There's a secret to barbecue chicken though—for all those horrid pieces of bird you've probably endured, there's a way that it can actually be good, great even. So it's time to hit the sauce and make this backyard classic into something we can all be proud to serve. 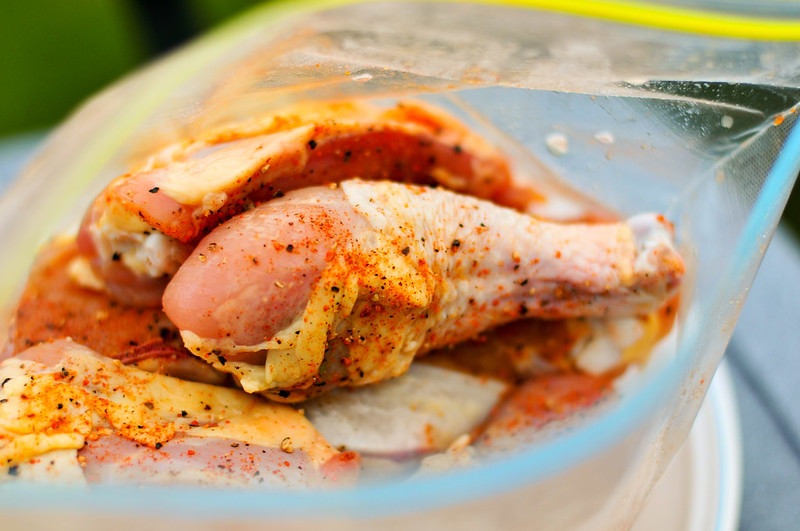 Let's start by dispelling a big grilling a pet peeve of mine, barbecue sauce is not a marinade. Most barbecue sauces have a high concentration of sugars, which caramelizes and then quickly burns over the heat of the grill. Think of barbecue sauce as a finishing sauce, something that can either be brushed on near the end of cooking or used as a condiment. Leaving behind the sauce at the beginning of this recipe doesn't mean abandoning pre-flavoring altogether, quite the opposite in fact. Before starting barbecue chicken, I give the pieces of chicken a nice coating of my favorite dry rub, and if I think far enough ahead, I'll let the chicken soak up some of those spices in the refrigerator for a day prior to grilling. 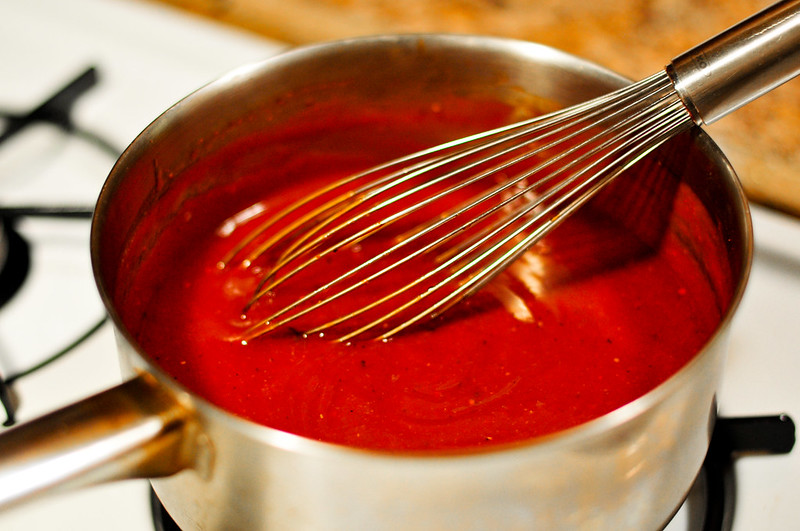 While the chicken is resting, there's some time to consider sauce. I'm a big advocate for making your own sauce at home. You can usually throw something decent together with everyday items in your pantry, and there's a good chance that it will taste better than most bottled stuff you might pick up at the megamart. Barbecue sauce is one of the easiest things to make when it comes to barbecue and grilling, it's hard to screw up, and the possibilities for experimentation are endless. For this particular batch of chicken, I used a completely classic barbecue sauce, a recipe that I use as a base for a lot of other sauces as well. 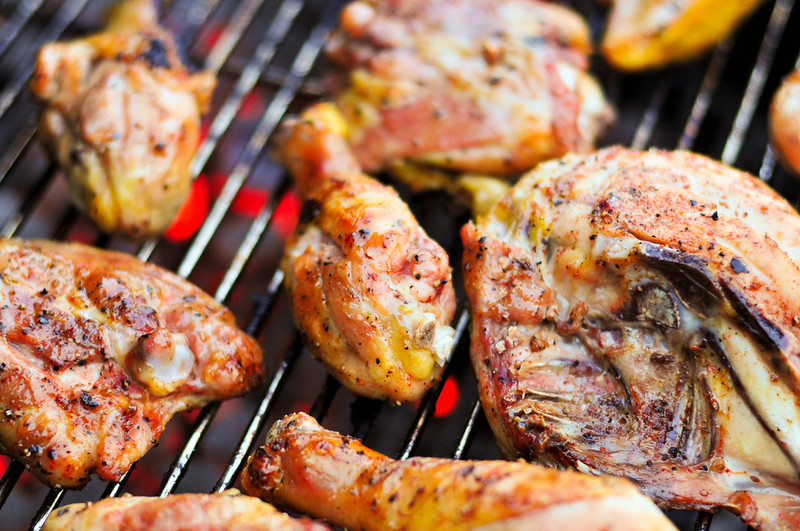 Ok, haters, here comes your chance to do some good ole fashion hatin'—we're grilling this "barbecue" chicken. If you want to pigeonhole "barbecue" as a cooking method, I am wrong to label this "barbecue chicken," since it's not cooked low and slow. I've recently reverted back to embracing barbecue as a kind of catch-all term, letting it take the context in which it's used, so we're making barbecue (sauce) chicken here.

To start the cooking off right, we need a two-zone fire, with all of the coals on one side of the charcoal grate and the other side empty. With the fire set-up, the chicken goes skin down on the cool side of the grill, is covered, and let cook until the skin starts to brown and crisp, about 30 minutes. 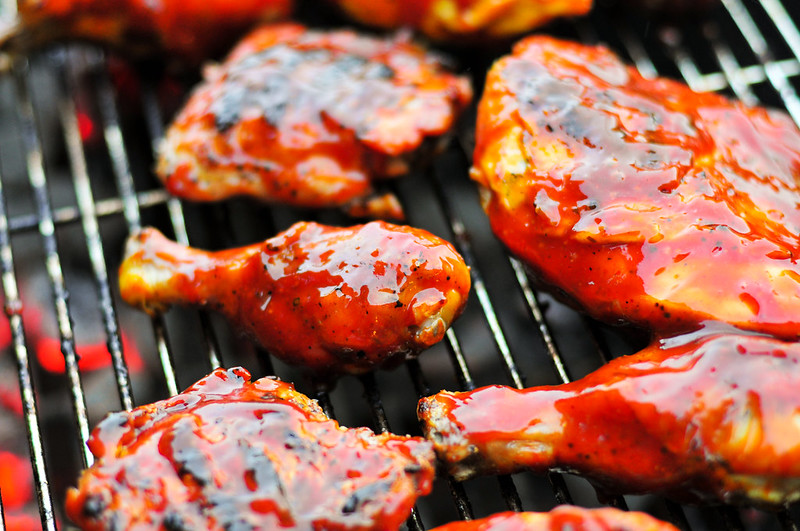 In my early days of barbecue chicken making, I went straight from cool side of the grill, to finishing off on the hot, but an episode of Cook's Country I happened to catch had an in between step that turned my good barbecue chicken into something sublime.

Once the chicken has started to brown on the cool side of the grill, move it to the middle where the fire is hotter, but not directly over the coals. Start brushing the chicken heavily with the sauce, cook for five minutes, turn and repeat three more times. With the chicken not over the high heat yet, the sauce has a chance to bake in, giving an outstanding flavor the runs deep in each bite at the end. 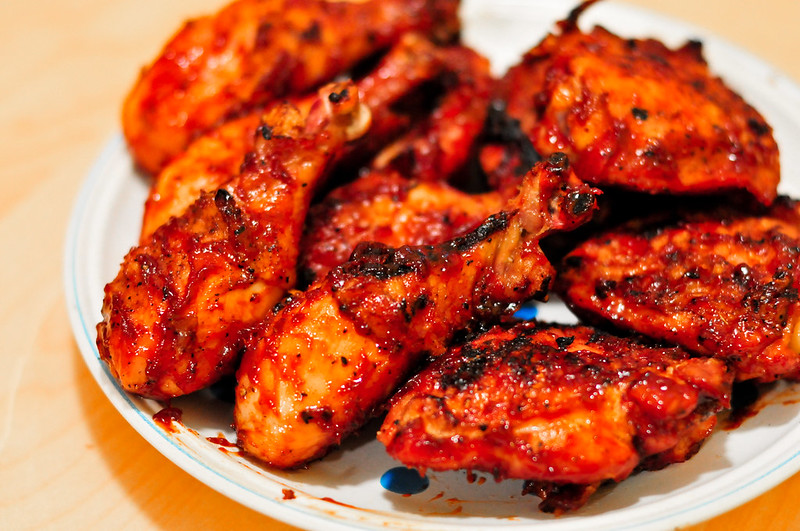 After a solid 50 minutes of cooking, the fire has lost a fair amount of heat, so when the time comes to finish the cook over the hot part of the grill, it's not so blazing that the chicken will quickly burn. It'll take a good five minutes to get the sauce to caramelize, and there's times for a final coating of sauce here too.

After a little rest, it's time to enjoy the fruits of your labor, and boy are they delicious. A slightly crisp skin and tender meat holds multiple layers of sauce goodness. With one taste you'll know exactly what barbecue chicken can be and question why anyone would ever put up with the blackened and burnt stuff that's the backyard norm. 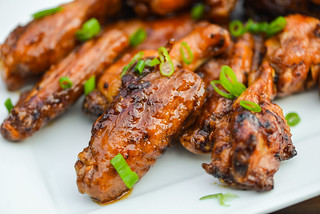 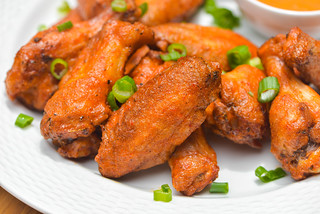