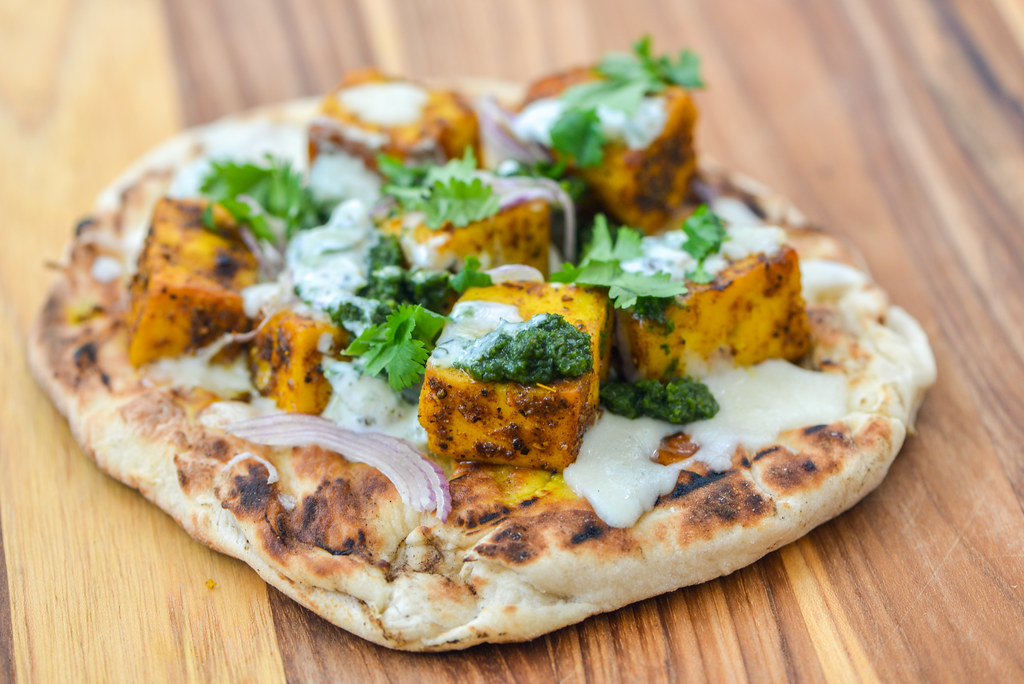 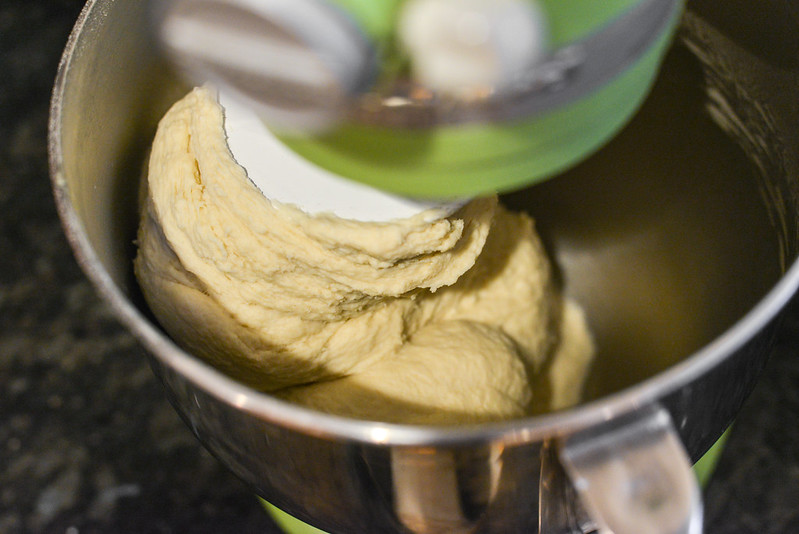 There are definitely ways to take shortcuts to get something similar with less time and effort here. One step would be to pick up naan from your local Indian restaurant instead of making it from scratch. For me though, the fresher the bread, the better the end result, so whipping up a batch of naan is well worth the investment, especially since the actual effort isn't much—I let the KitchenAid do all the kneading for me, and then it's really just a matter of waiting awhile during two two-hour rises. 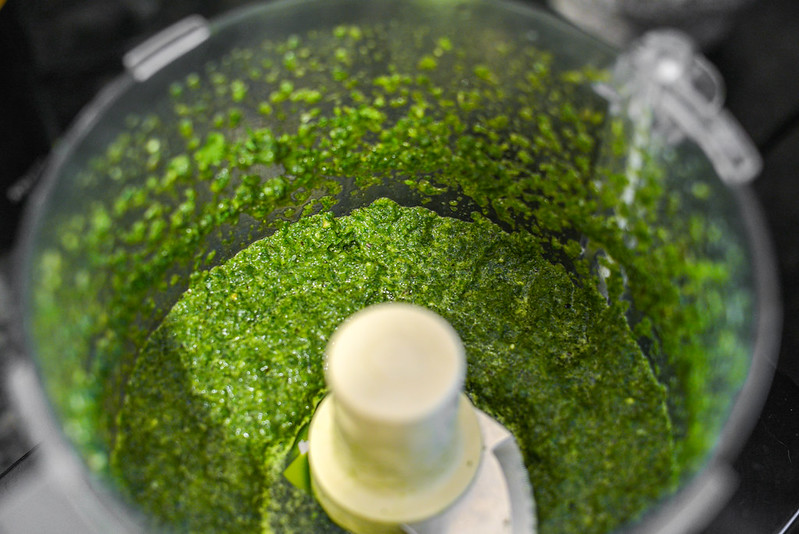 While the bread rises is a great time to put together the rest of what's needed for the final pizzas. Of the two sauces I used, the mint-chutney I deem a requirement—it gave the final pie its bright flavor and a welcomed hit of heat. You could also pick this up at an Indian restaurant if you wanted and save some shopping and time.

The other sauce I used was a cucumber-mint raita, which I made by quickly whisking together yogurt, cucumber, lemon juice, and cumin, then seasoning with salt and pepper. This definitely added to the end product, but not in the important way the chutney did, so I considered it optional and left it off to avoid the recipe looking even more daunting on paper. 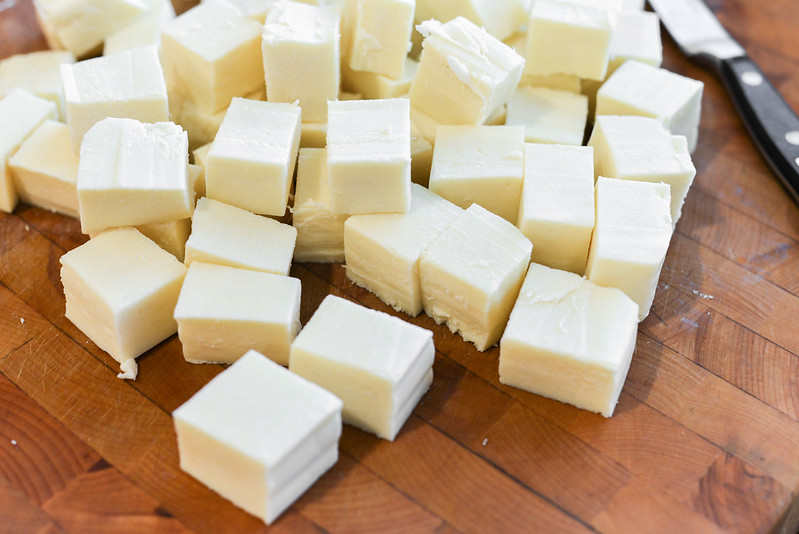 The one place I cut a corner myself was picking up store-bought paneer. I've made paneer in the past, and to be honest, it's also not much work and is mostly a matter of time, but I imagined if I added in a whole cheesemaking process here, no one would attempt the recipe at all. Store bought paneer is definitely not the same though—there's a very noticeable loss in freshness and softness, although my pre-made paneer did taste great in the end pies and there was not one guest compliant about it. 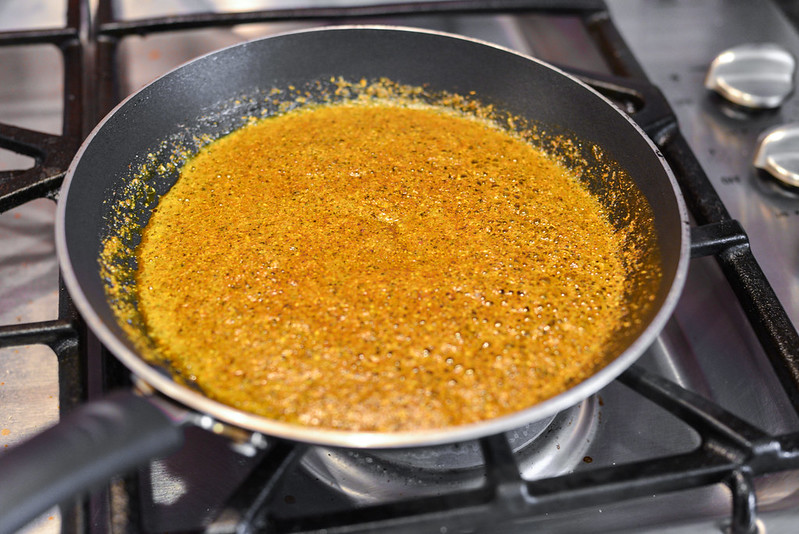 To me, the spice mixture for the paneer is the most crucial part the recipe and it's worth searching out one of the defining ingredients here—asafoetida. Asafoetida is a pungent spice that mellows when cooked and provides a very savory, slightly oniony, and wholly unique flavor that I think is the "secret" to making the paneer so great. 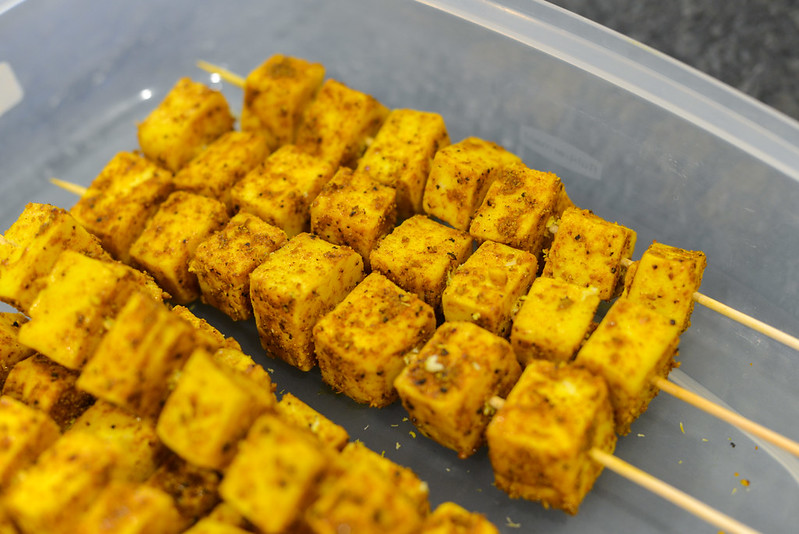 After mixing all of the spices together and then toasting them in oil, I coated the cubes of paneer in the warm spice mixture and then skewered them up to get them ready for the grill. 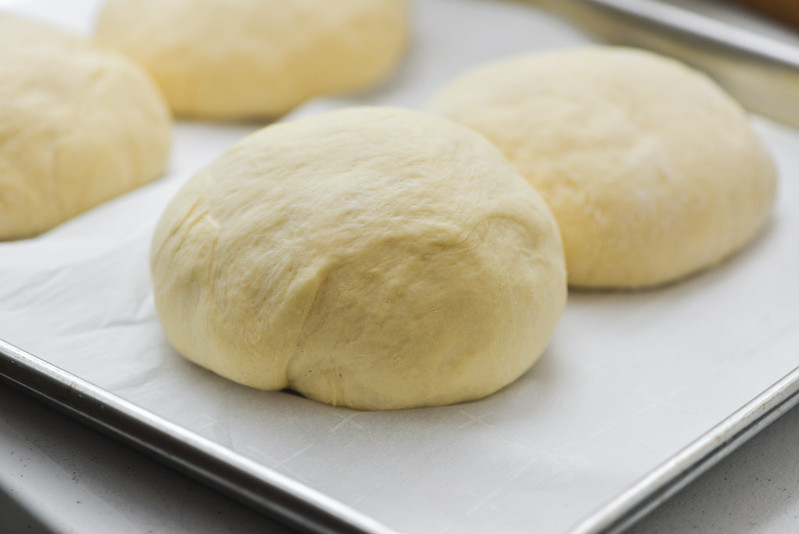 I usually divide my naan recipe into twelve pieces, but chose to do eight this time around so I had slightly larger and thicker pizzas that could handle all the toppings and be cut into bigger slices. After dividing the dough and allowing it to rise again for an additional two hours, it was also ready for grilling. 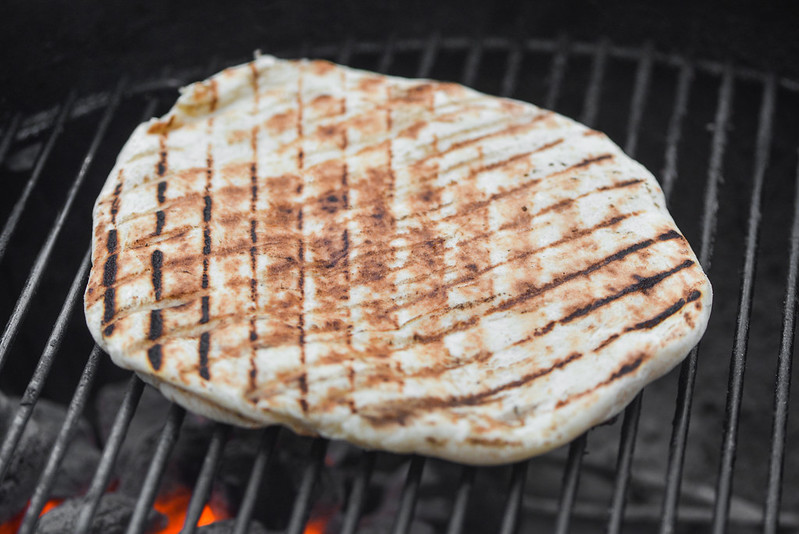 One reason naan is so soft and pillowy is the extreme heat used to cook the dough in a tandoor, where it's normally baked. At home, the grill is an excellent choice for those of us short a tandoor—the high heat outputted by a fresh charcoal fire will provide what you need get an ideal naan. The only thing you need to watch out for is over cooking, the bread can go from toasty brown to charred in no time, although a little charring on a naan isn't necessarily a bad thing. 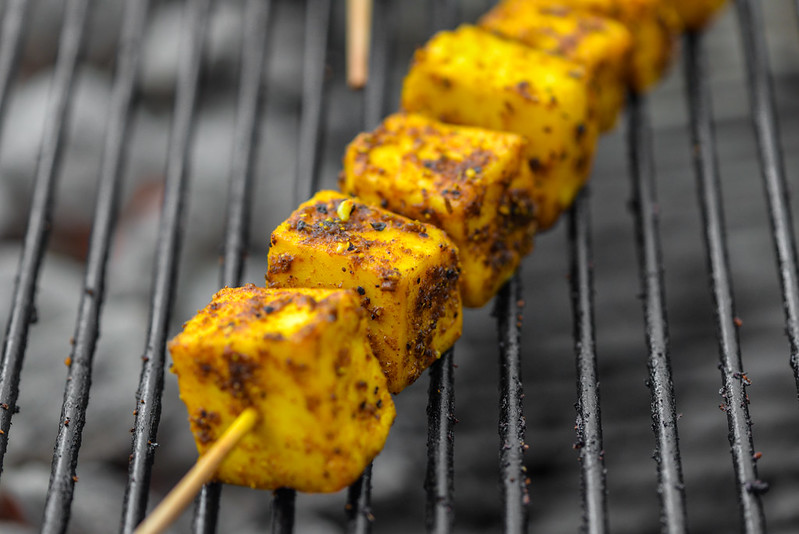 I cooked up all my naan first to make use of the fire while it was at its hottest. Once those were done and resting, I placed the skewers of paneer on the cool side of a two-zone fire, covered, and the let them cook until the cheese was soft, which took about five minutes. I then moved them over to the hot side of the grill to get a little browning on the cubes before removing them and taking the cheese off of the skewers. 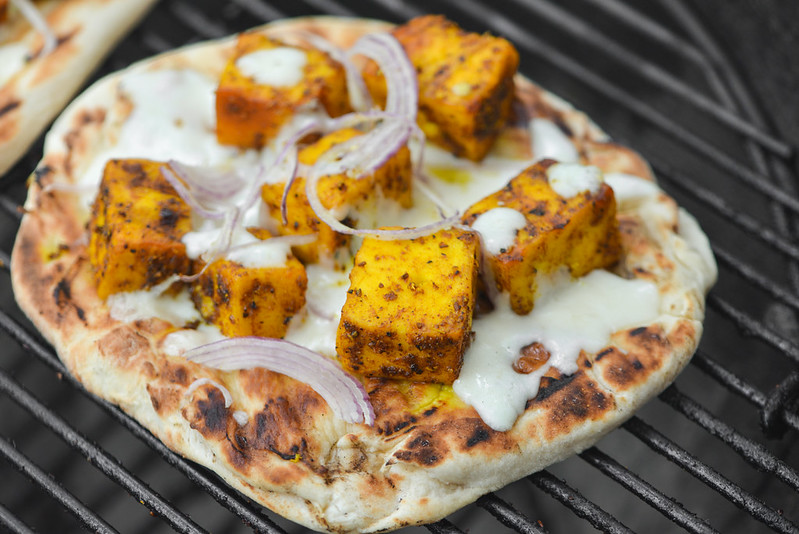 Next, I loaded pieces of naan up with cubes of paneer and topped with mozzarella and thinly sliced red onion. The large paneer cubes did look a little ridiculous, but also delicious, and everything look downright mouthwatering once the mozzarella had melted after a short stint on the cool-side of the grill. Once done, I removed the pies from the grill, spooned on the mint chutney and cucumber raita, and then added a sprinkling of fresh cilantro leaves before serving. 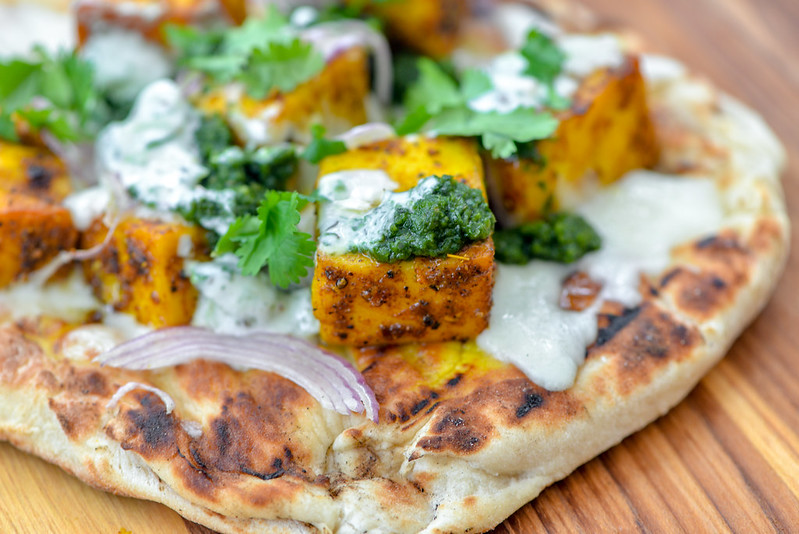 Man were these some amazing creations. They were originally based off of a similar recipe for a kati roll I did last year, but the different form made them pretty unique. The naan was really what changed things up here—that fresh and soft bread made for a great base on which a sea of flavors came together exceedingly well. The savory, spiced paneer was the second focal point, while the mozzarella added a creaminess that gave the pie its most pizza-like quality. The mint chutney added a welcomed spiciness and fresh touch and the red onion a bit of sharpness and slight crunch. While I was making these, it didn't feel like a whole lot of work to me—only when writing the recipe and this post did I even consider this could come across as a bit too much for the average person. So, what do you think—would you be willing to put this altogether as written to make some really killer naan pizzas?