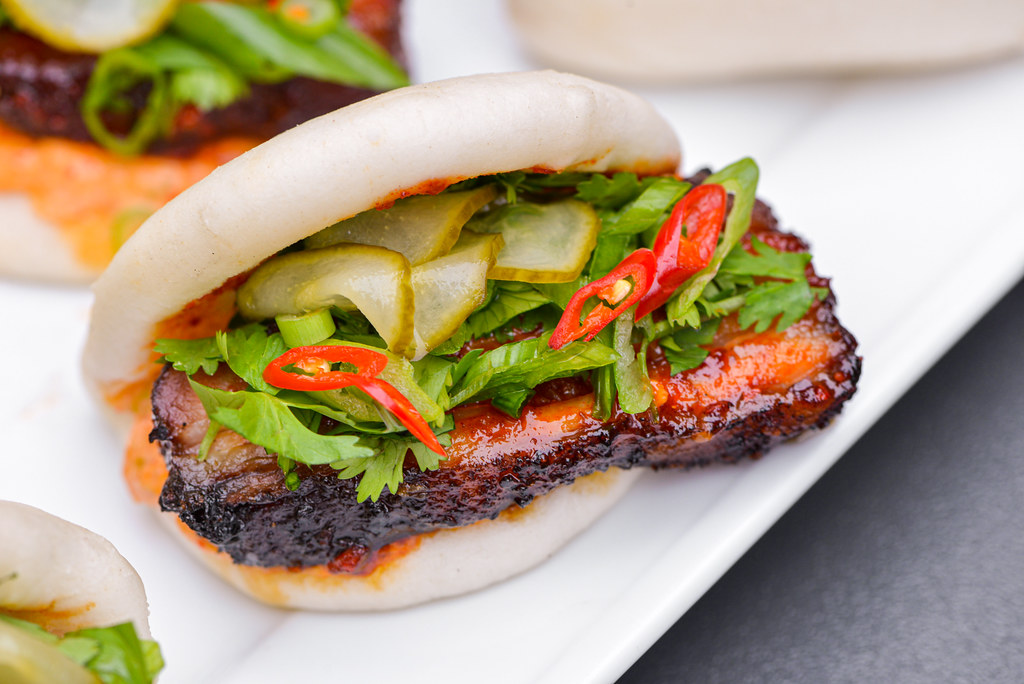 As we draw 2021 to a close, I decided to leave one of my favorite recipes of the year for last—these spicy pork belly buns. It was kind of hard to hold onto these because I loved them so much that I made them multiple times during the year and I know they would get more traction during prime grilling season, but for a year with lots of ups, downs, and trying times, I wanted to end on a high note. I know in December not everyone is going to bust out the smoker to make these, but the good news is, there's so much strong Korean-inspired flavor going on in this pork belly that it almost turns out as delicious made in the oven instead of the smoker, so there's really no weather excuse not to try them now. 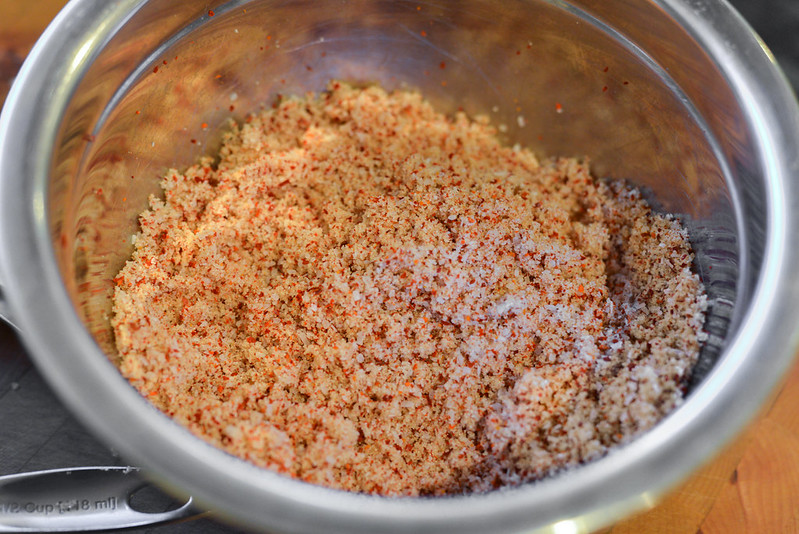 I made these along with the smoked bo ssam I shared last week. That dish was inspired by Momofuku's bo ssam, and no visit to Momofuku's Ssam Bar is complete without pork belly buns, so I felt like I had to make some for my meal at home too. Like my smoked bo ssam, these veered in a different direction than Momofuku's, mainly by focusing on layering a fair amount of heat that started with combining gochugaru—Korean chili powder—with light brown sugar and salt into a seasoning mixture. 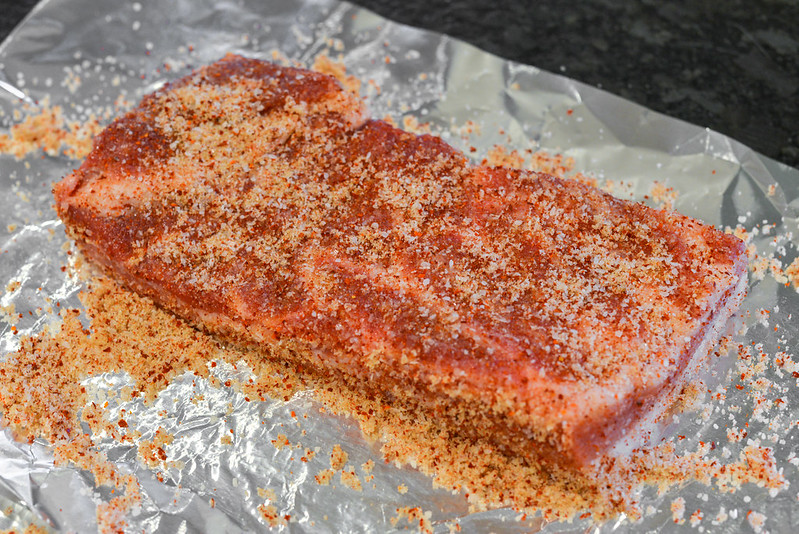 I applied that simple rub to a skinless, boneless piece of pork belly that was a little under three pounds. Once the meat was very generously coated, I wrapped the belly in foil and placed it in the fridge overnight to allow the salt to brine the pork by extracting moisture that then gets reabsorbed, enhancing moisture retention and flavor. 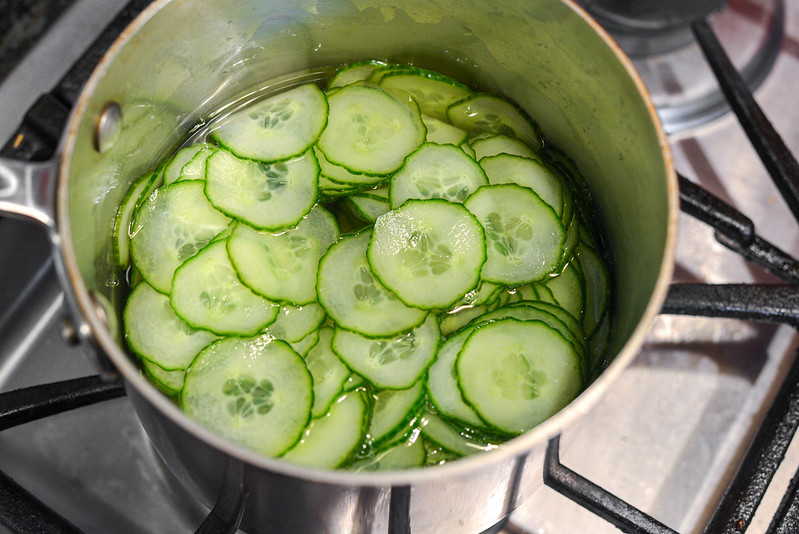 While the pork chilled out in the fridge, I made the variety of toppers that would go into the final assembly of the buns. That began with some quick pickles, which I thought would be crucial to provide a sweet contrast to the heat and also a good tang to help cut through the very fatty and rich belly. 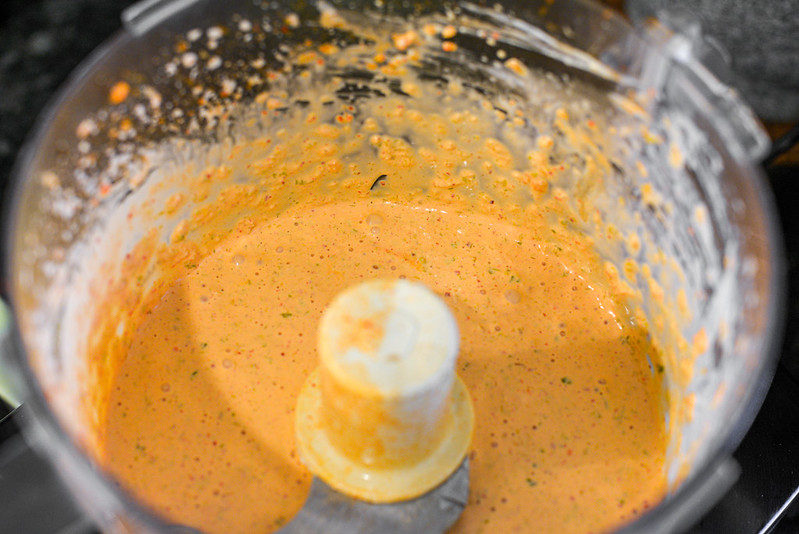 Next was a kimchi mayo that I first experienced earlier on in 2021 when I decided to try out Kenji's Korean chicken sandwich recipe. I'm not the biggest kimchi fan and I was dubious I would really like his two-ingredient mayo, but damn, it was so incredibly tasty that I ate it with a spoon. I added some more depth to my recipe by tossing sesame oil and soy sauce into the mix, which melded well with that spicy, fermented funk of kimchi that gets scaled back in intensity when combined with creamy and cooling mayonnaise. 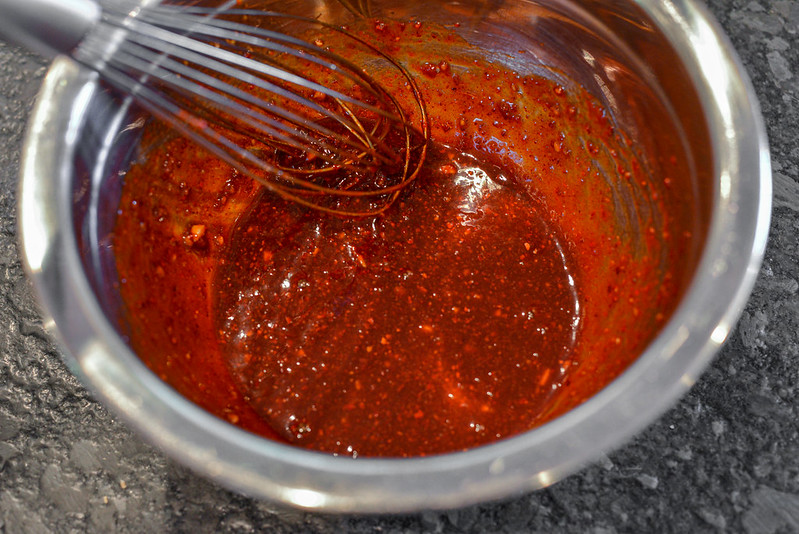 Lastly, I made the glaze for the pork, which had spicy gochujang and gochugaru at its core, delivering a hearty heat that was tempered by an equal amount of Korean sweet rice syrup. I then rounded out this thick sauce with a little rice vinegar, soy sauce, garlic, and ginger. 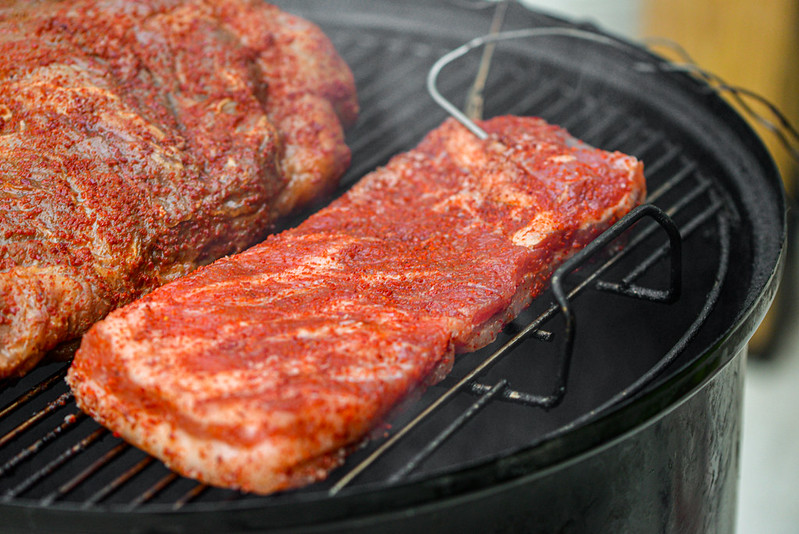 I began smoking the pork the next morning, tossing it into the smoker running just north of 225°F with a couple chunks of hickory wood nestled into the coals. 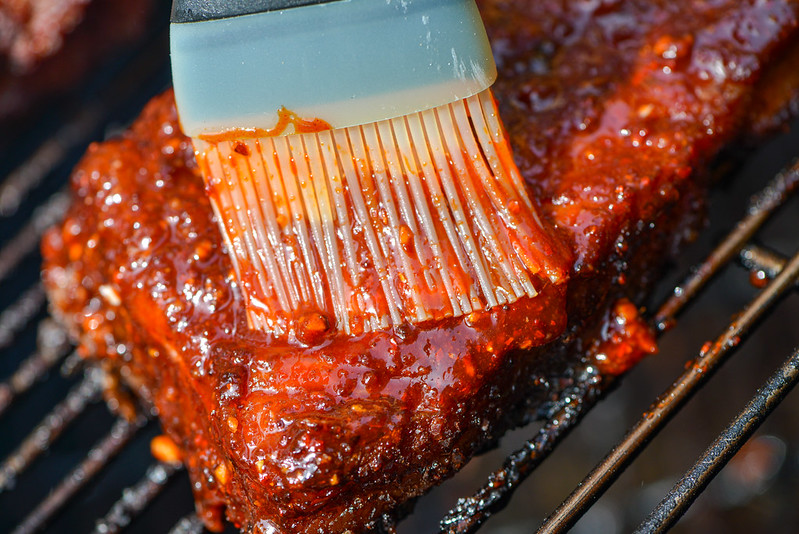 My final target internal temperature for the belly was 203°F, which seems to be a pretty magical number when most connective tissue has broken down, fat is at its most luscious, and the meat is still plenty moist and tender. It took about six hours total to get there, and in the last hour of cooking, I brushed on a layer of the glaze all over the belly, giving it time to bake down before the pork was removed from the smoker. 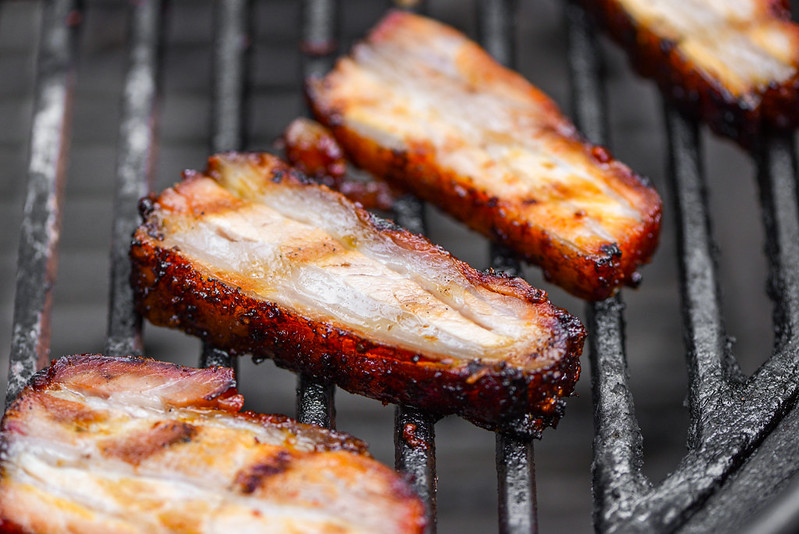 After the pork was done, I wrapped it in foil once again and tossed it in the fridge to chill. The chilling step isn't required, but it helps a lot with cutting clean slices and I've found in some instances, the pork is even better when reheated. When it came time for dinner, I already had my grill going, so I used that to warm up the slices of belly I had cut, positioning the meat over indirect high heat. 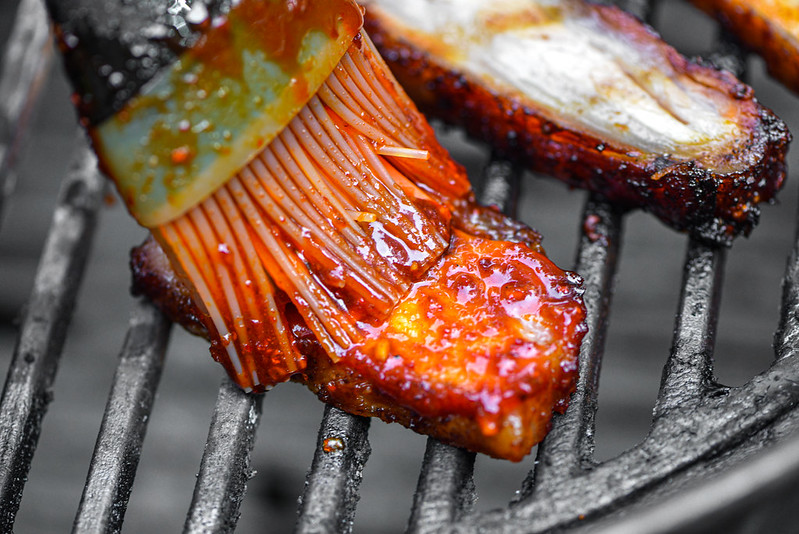 I then brushed each side with some glaze to give the final pork a more intense spiciness and covered the grill. It only took a few minutes for the pork to fully heat and become soft and supple again, at which time I assembled the final dish, starting with spreading some kimchi mayo on the buns I had steamed, adding a slice of pork belly to each, then topping with cilantro, scallions, birds eye chilis, and pickles. 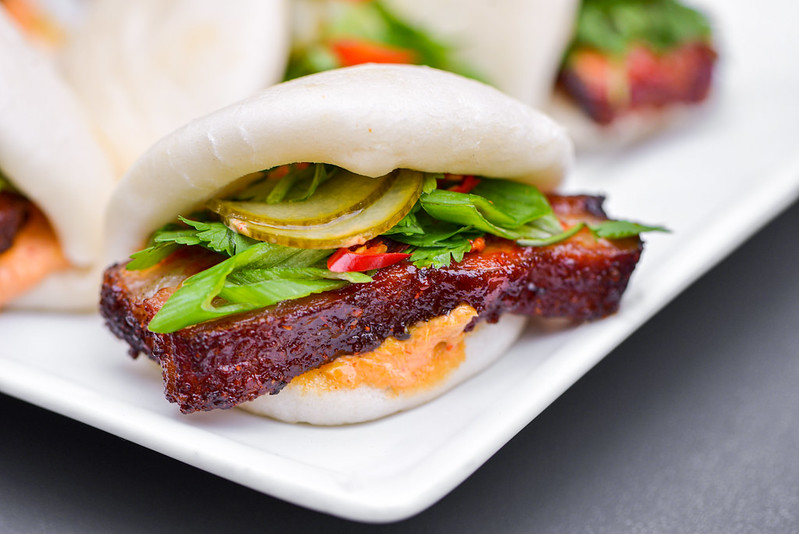 Steamed buns are very versatile and I love them, so they show up often on my site, but no recipe tasted as fully realized or delicious as this one. To start, this may have been the best pork belly I've every smoked—I think I may have just gotten a great piece with the right fat-to-meat ratio to make it both hearty and melt-in-your-mouth. The glaze gave that pork a deep, spicy flavor with distinct Korean flavors along with just enough sweetness to keep it well balanced. Of the toppers, the kimchi mayo did the most work, adding both cooling and extra savory qualities, while the cilantro, scallions, and pickles all provided their own unique tastes of freshness. The birds eye chilis really came about because I thought they would look good in the photo, but they ended up being crucial in boosting the heat as well as adding a little fruitiness, which further elevated the bun as a whole. Man, every time I think of these pork buns, I just want to make them again and I really hope some of you give them a try and let me know if they win your heart the way they did mine. 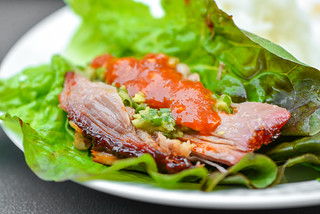 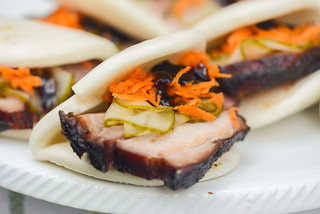