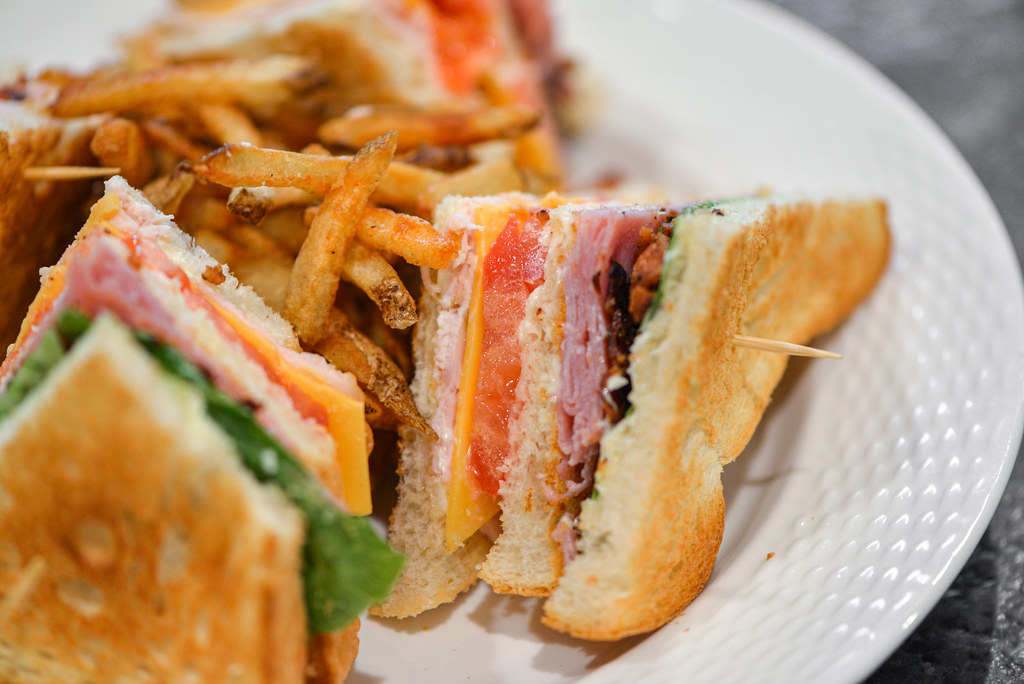 When it comes to deli meat, the sweeter the better for me—if it has "honey," "sugar," or "maple" in the name, that's the one I'm picking. One of the benefits of finally getting a meat slicer was supposed to be making deli meats tailored to my own tastes, but a year and half into ownership has found me never acting upon that with the exception of roast beef once. So I decided there's no time like the present to finally try out making my own sandwich-bound meats and I got to combine my love for sweet and smoky in this maple-glazed smoked turkey breast. 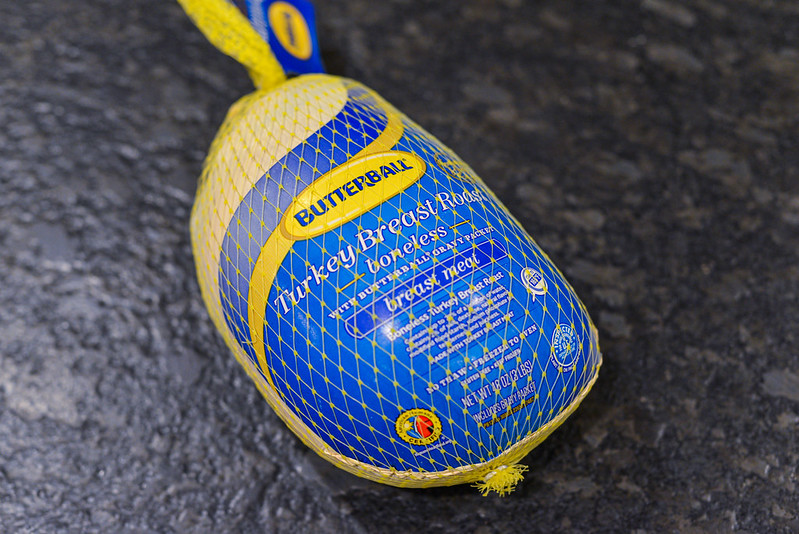 There were two options to start out making a boneless breast roast—either find a ginormous single turkey breast, or pick up one of the frozen versions which is usually made up of two smaller breasts secured by a webbing with all the meat fusing together during cooking. The later is the easier option and the direction I went, grabbing one of these Butterball roasts from my local supermarket. 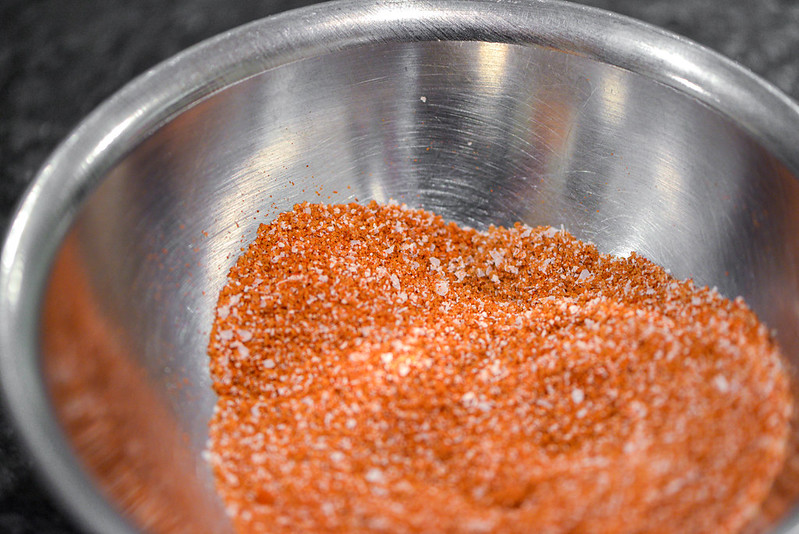 My plan was to really deliver that sugary flavor to the exterior of the meat via a glaze, but I started to build up the sugar in the rub as well. I made a minimal mixture of dark brown sugar and salt for the seasoning, then decided to toss in some paprika mainly for color purposes. 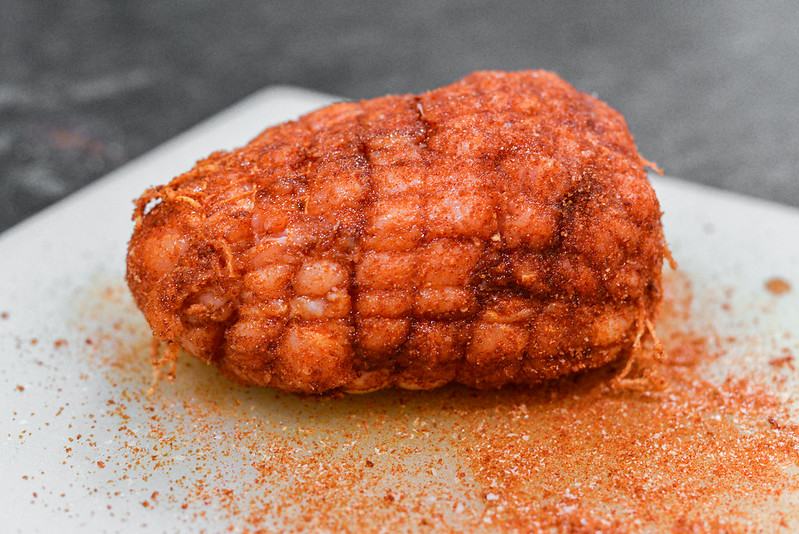 I applied this seasoning mixture all over the defrosted turkey, which I had left in the webbing it came in, making for super easy prep. I then wrapped the turkey in plastic and let it sit in the fridge overnight to allow it some brine time. Since the Butterball turkey was pre-brined, I'm not sure this step was totally worth it, but I figured it couldn't hurt either, and I was also after the juiciest meat I could make too. 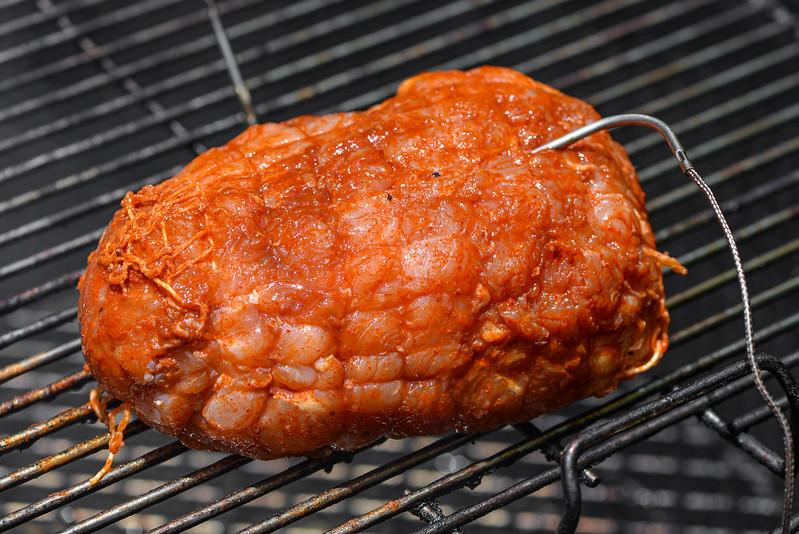 When it came time to cook, I fired up my smoker to 225°F and tossed a couple chunks of applewood on the fire. I then placed the turkey in the smoker, inserted a probe to keep an eye on the temp, covered, and let it go. While this is low and slow cooking, due to the minimal fat content in the breast and low final internal temperature—I was shooting for 155°F—the cook didn't actually take all that long, 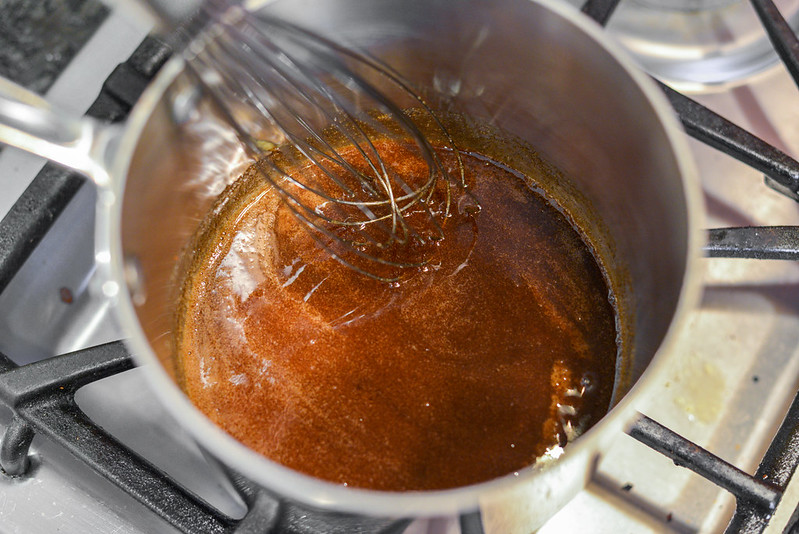 Once I had the turkey cooking, I turned my attention to the glaze, which I also kept very simple and took some cues from the many ham glazes I've made in the past. I used a combo of maple syrup and brown sugar to deliver that glossy, sweet coating I was after, but also added in a little Dijon to add a slight contrast and depth to the otherwise all sugary syrupy. 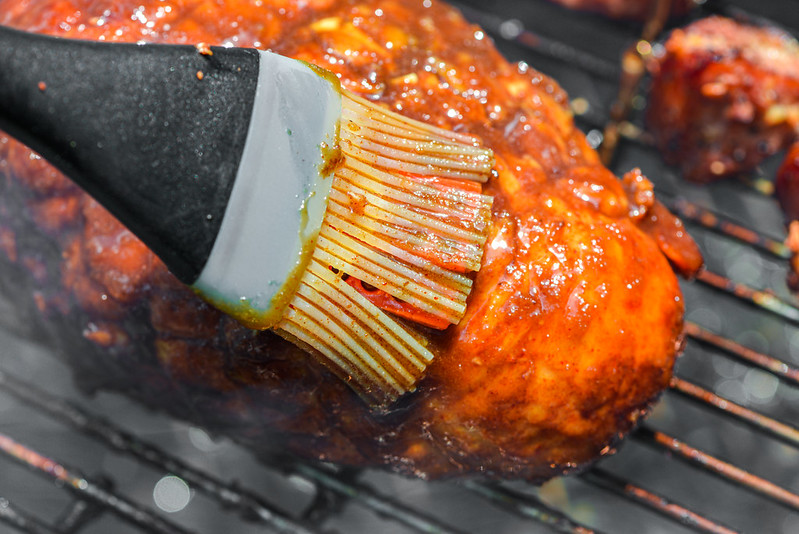 I had to allow some time for the glaze to set on the meat after application, so I brushed the turkey with it once the meat hit 140°F, which happened after about one and half hours of smoking. After brushing on the glaze, I let the turkey cook until the center of the roast hit 155°F, which was just over 30 minutes more. 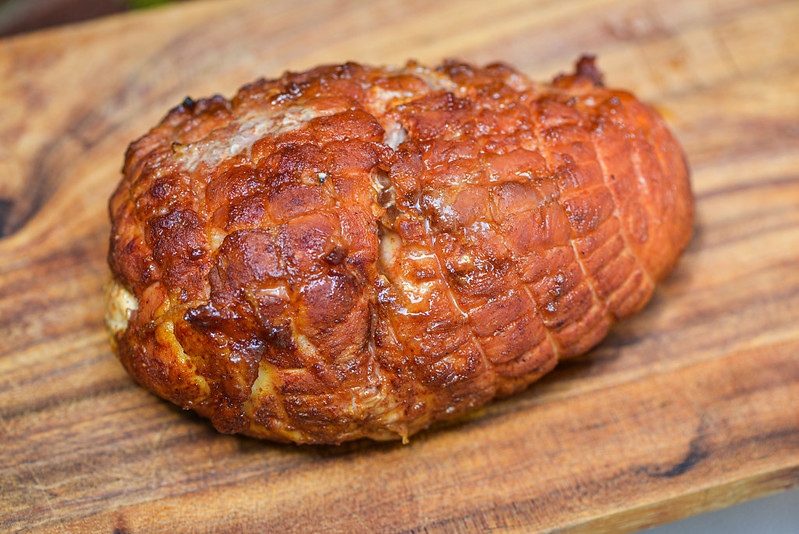 I was hoping for that glossy coating I'm used to on my holiday hams, but turkey didn't end up with that desirable appearance, although it did have a nice rosy-brown hue to it. After letting it cool to room temp, I wrapped the turkey again in plastic wrap and placed it in the fridge until cooled. 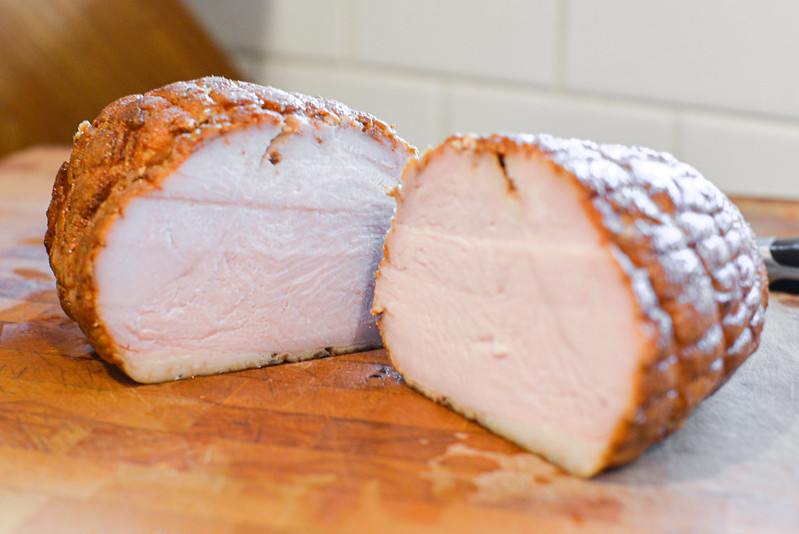 Next came the first real test—once chilled, was the meat still moist and juicy like I had hoped? An initial slice to cut the roast in two for slicing revealed tender and still juicy meat, so I was happy on that front based on looks. 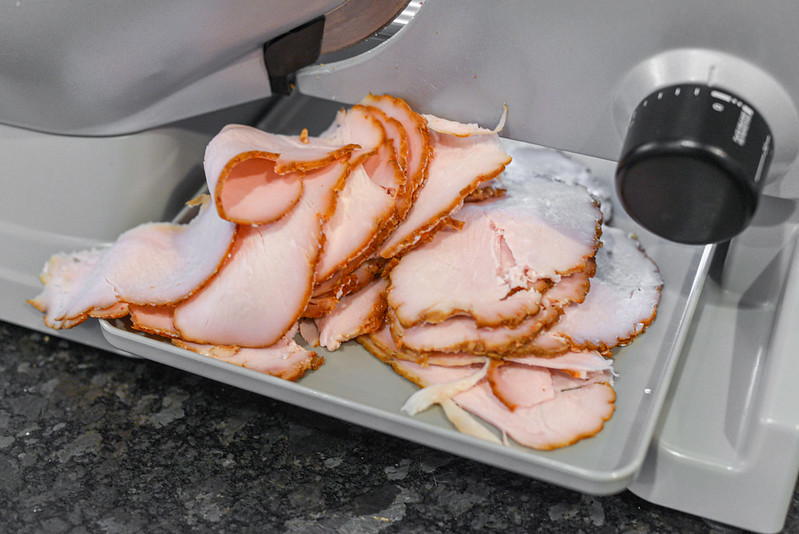 I then got to slicing and a taste test confirmed a great texture and moisture that one-upped the usual supermarket deli meats in my opinion, but even better than that was the flavor. The meat had a very pleasant smokiness to it with a strong maple flavored crust that ensured that all bites had that sweetness that I love. 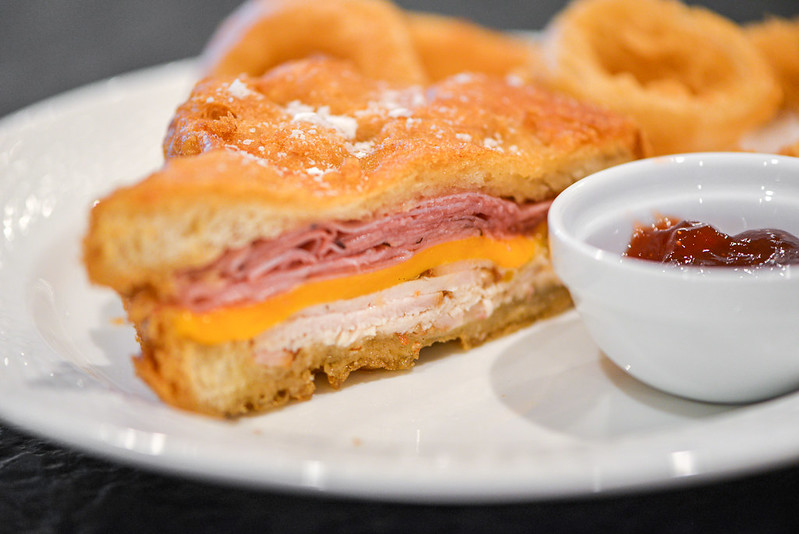 I sliced all of the turkey then froze half, and used the other half throughout the week in various applications from club sandwiches to fried Monte Cristos. The meat held up very well over time, which is another trait you want from good deli meats. I started with turkey because it seemed the easiest and most accessible, but now that I have one positive home cooked deli meat experience under my belt, I can't wait to delve more into this new medium for me—there's so many possibilities beyond what you get at a deli counter, I'm sure I can offer up some creative and delicious deviations from the usual. 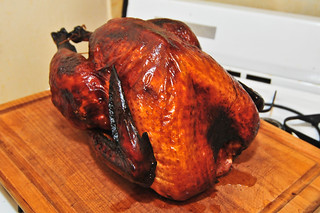 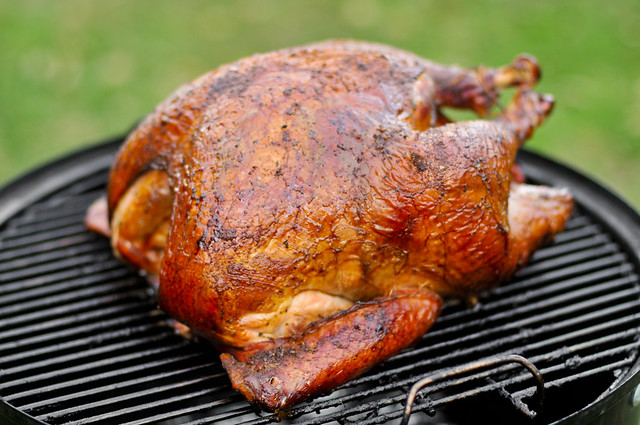