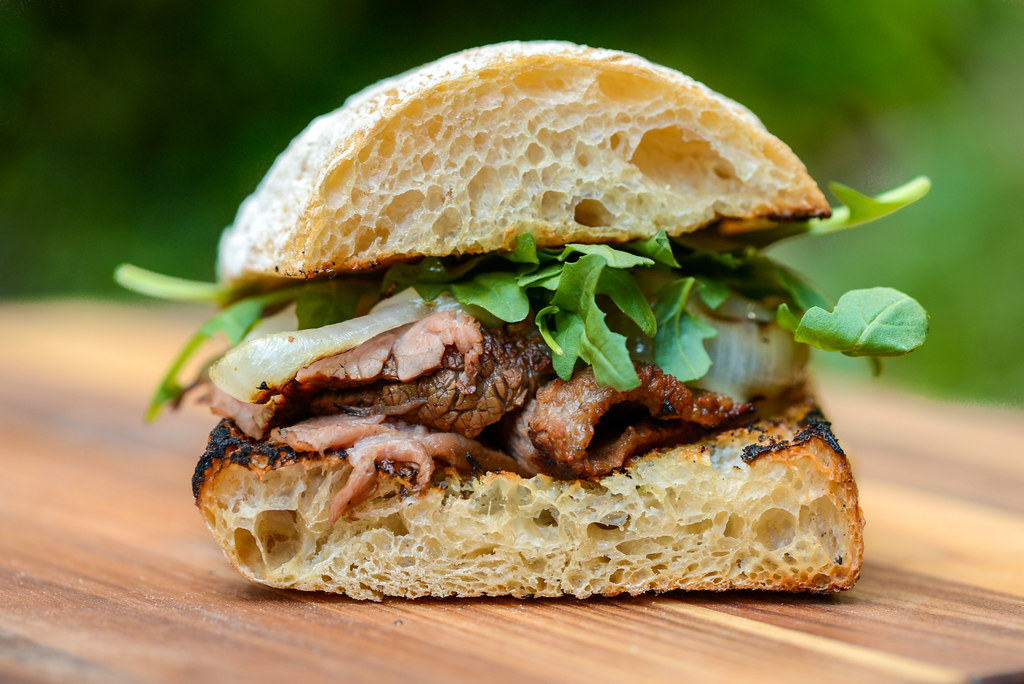 I used to have a pretty solid hate relationship with steak sandwiches—more than one too many tough, overly chewy specimens soured me on the genre altogether (except for cheesesteaks, because I could never turn my back on a proper cheesesteak). As I learned to cook, I realized that the folly in steak sandwiches was usually improper cooking or slicing, both things easily correctible when playing on my own turf. So now that I've warmed back up to the steak sandwich, the halls of the Meatwave past is filled with prime examples of how to put together an excellent one, and adding one more to that trove are these marinated flank steak sandwiched with provolone and charred onions. 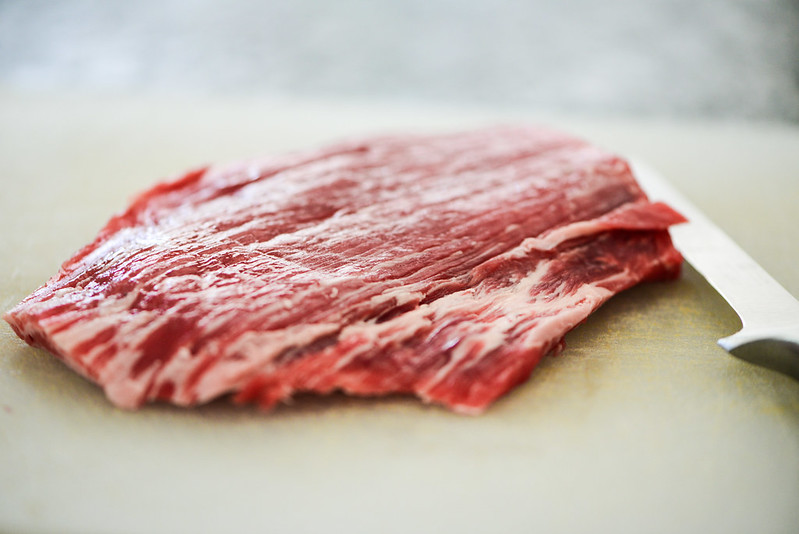 In my more novice days, I blamed the cuts of steak being used as the reason for poor sandwiches, but the reality is that some of my favorite pieces of beef—skirt, hanger, and flank—are those most commonly found stuffed between two pieces of bread. Yes, these cuts are on the lower end of the beef spectrum (although not on the lower end of the price scale anymore), but the folly in those less-than sandwiches was how the steak was cooked and sliced, because pound for pound, these cuts surely deliver on the desired big, beefy flavor. 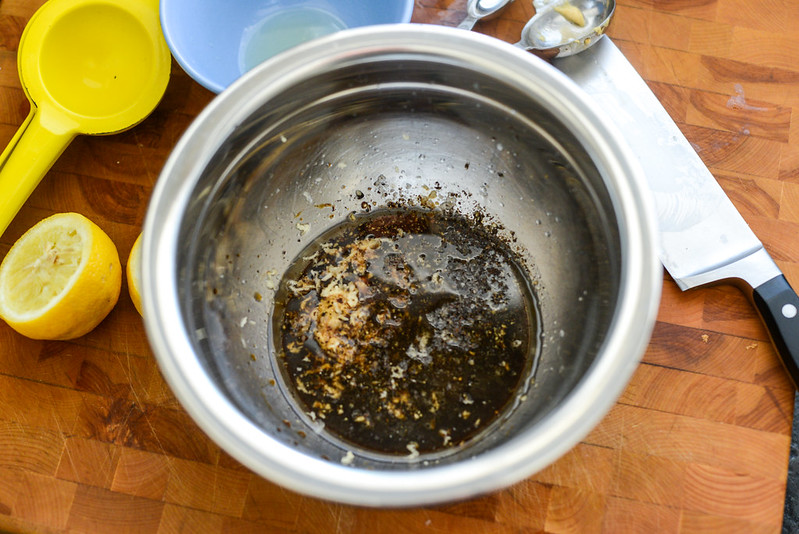 You can use any of those three somewhat similar steaks in this recipe interchangeably, but I opted for flank this time around. Flank is probably the least flavorful of the three, but luckily I had a proven way to make up for any lack of flavor thanks to a marinade I concocted to use on a tri-tip a couple years back. That tri-tip still stands fondly in my memory, and readers who have tried it out have agreed that the marinade does some real magic on the beef. I contribute a lot of the success on savory Worcestershire and soy sauce, both which play heavily in the mixture that also includes lemon juice, oil, brown sugar, Dijon, garlic, salt, and pepper. 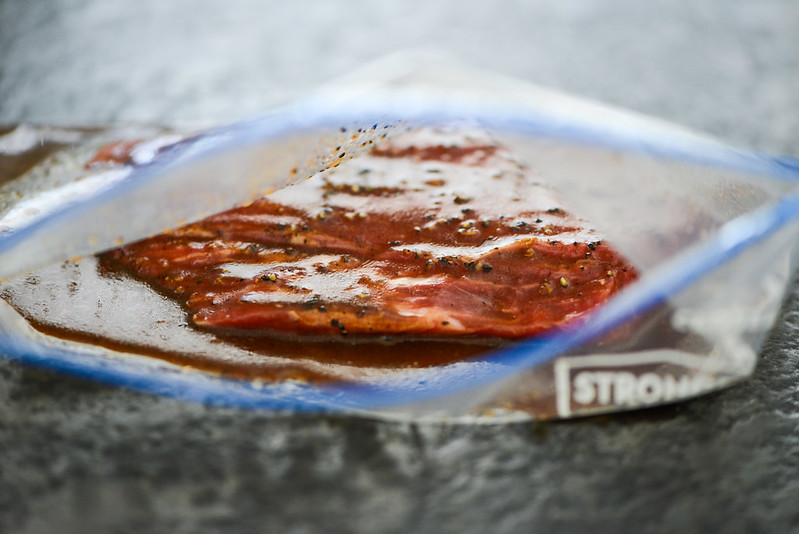 The steak doesn't need long to marinate to pick up a lot of flavor here. Four hours is ideal, but since flank steak is so thin and so much marinade will get into the mix by the shear amount that clings to the large surface area of the exterior, even an hour or two would do the trick if you're short on time. 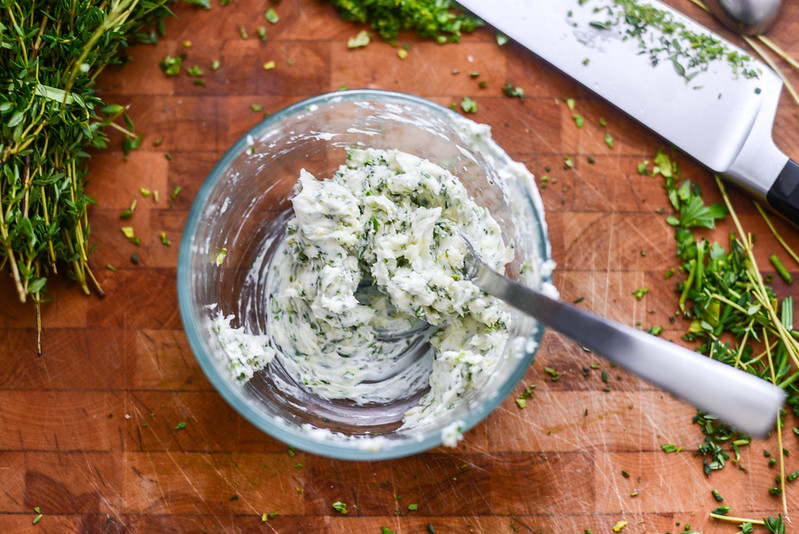 As the steak marinated, I used the down time to make what I hoped would be the piece of this sandwich that would take it from merely good to really exceptional. That was an herb and garlic compound butter, which I planned on slathering on the bread before toasting. That little extra hit of flavor can make all the difference in the art of sandwich construction. 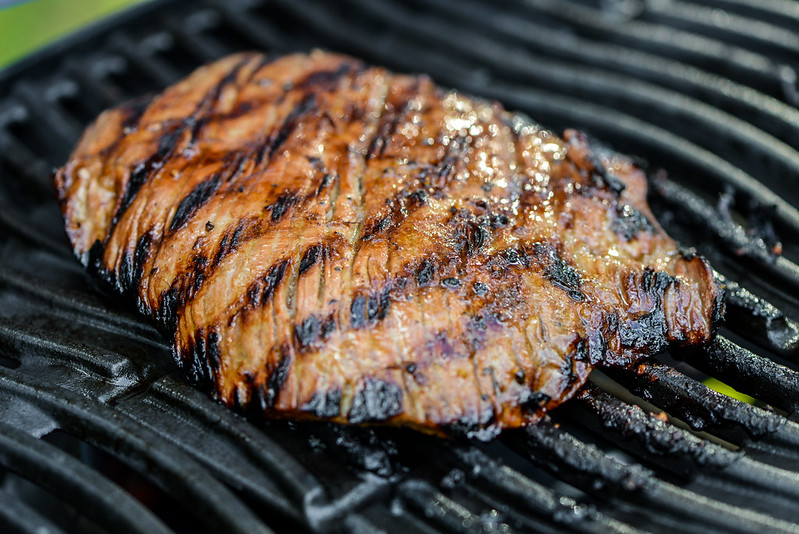 With the introduction of heat comes the part where a steak sandwich can easily fail. Flank, along with skirt, and hanger, loses a lot of flavor and tenderness if overcooked. By overcooked here, I mean anything more than medium-rare. Luckily, the extreme temperatures outputted by a grill makes the prospect of searing the exterior while keeping the interior nice and rosy a pretty straightforward proposition—just cook over direct heat, flipping fairly consistently, and usually by the time the outside is well browned, the inside tends to be right around the ideal 125°F mark. 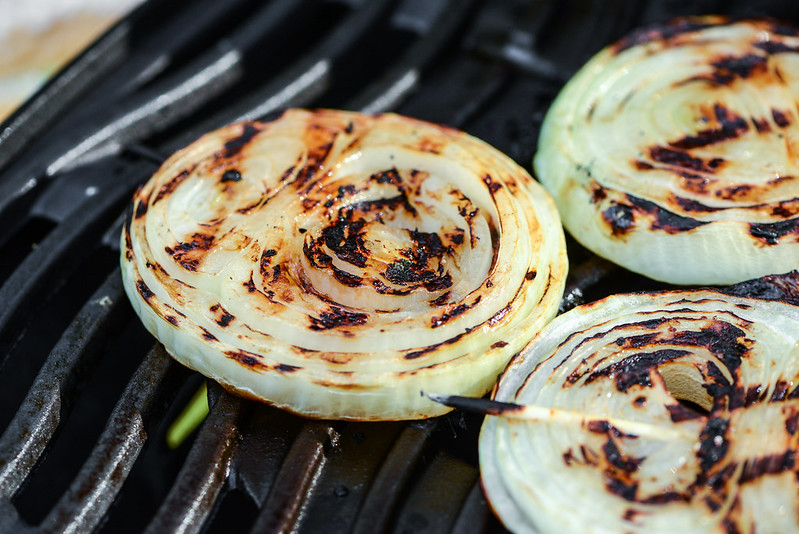 After grilling, it's a good idea to let the steak rest for five minutes to allow the muscle fibers to relax and cool down to a point where they retain juice better. This resting time provided an opportunity to make this sandwich even better by first grilling sliced and skewered onions until well charred with a crisp-tender consistancy. 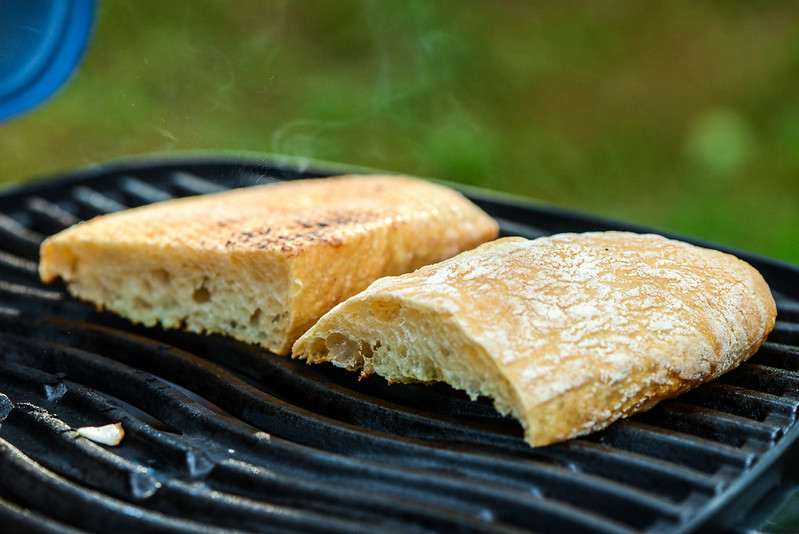 Second was toasting the ciabatta I had sliced and slathered with the herb butter. I think crusty, toasty bread really separates the ok sandwiches from the great, so I, at a minimum, almost always grill the bread. When I'm going for better than normal, I'll butter or oil the bread too, and if going for gold, as I was here, I get fancier with things like the garlic-herb butter that bakes in new flavor components on top of the textural benefits gained from hot bread. 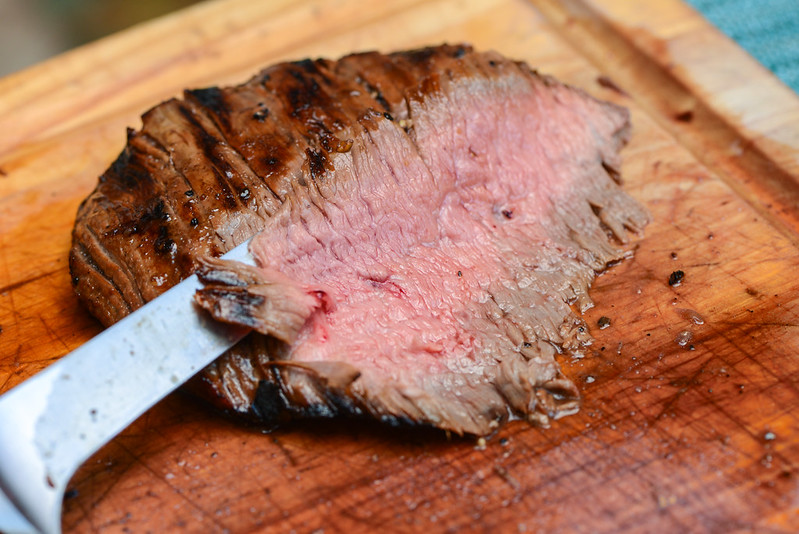 Overcooking the meat is only one potential problem with a less-than steak sandwich, more often than not though, the real issue comes down to slicing. These types of steaks have long grains of muscle fiber that, if not cut into smaller strands, render even the best cooked steak unpleasantly chewy. So it's important to take note of how the grain is running and slice against that in thin 1/8 - 1/4" slices. 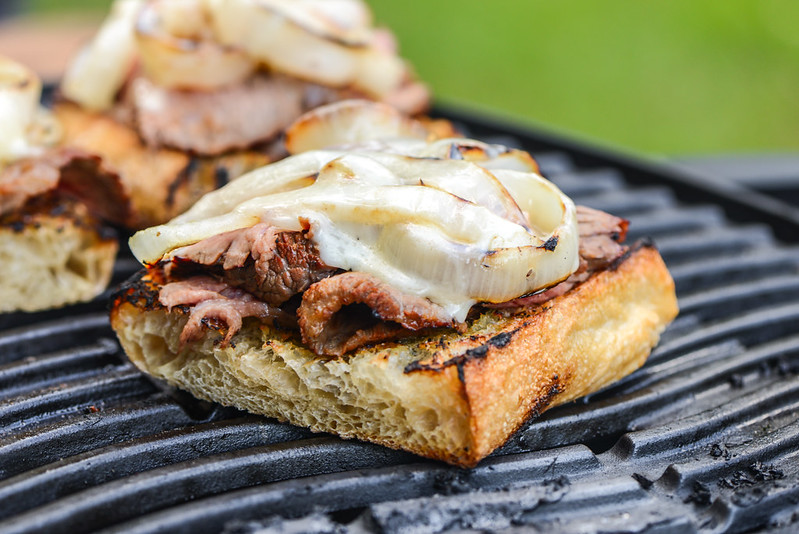 After slicing, I piled the steak onto the now crisp and buttery pieces of bread and topped with rings of the charred onions and a slice of sharp provolone. Then I placed the entire thing back on the grill, over indirect heat, covered, and let it cook until the cheese was melted. A final topping of fresh arugula finished it off, and then it was time to eat. 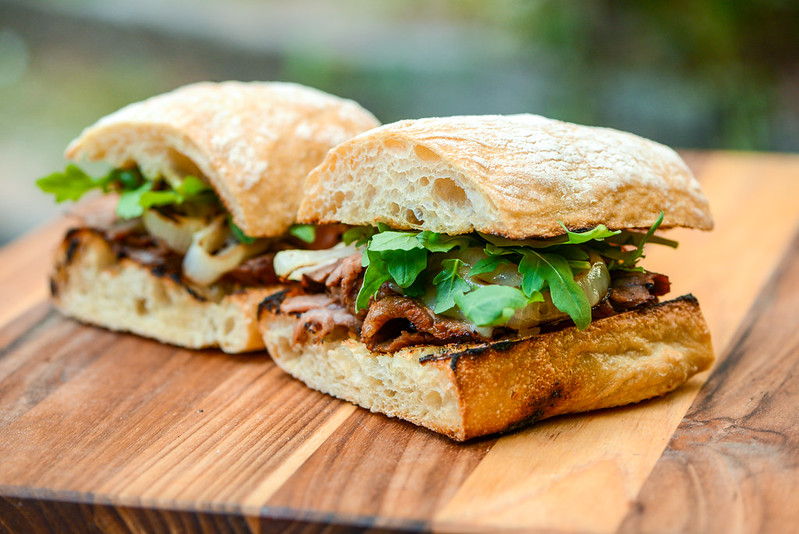 If just one steak sandwich I had back in the day was this good, I think I would have kept trying them over and over again in hopes another like it would grace my palate again. There was something so simple, yet deeply satisfying with this particular sandwich. The steak itself was beefy and its tenderness ensured it didn't pose an obstacle to enjoyment. The crisp-tender onions added a nice crunch and a deeper grilled flavor, the provolone provided a creamy and sharp contrast, and the arugula a fresh and peppery bite. I lay a lot of success though in the little things—the savoriness of the marinade and crusty, buttery bread embedded with a rich garlicky and herbal flavor, both which added the fine touches that made this sandwich stand out in way it wouldn't have without those details. So with some steak know-how and sweating the small things, I was able to transform the steak sandwiches I used to give the cold shoulder into what I now consider a crowning recipe.