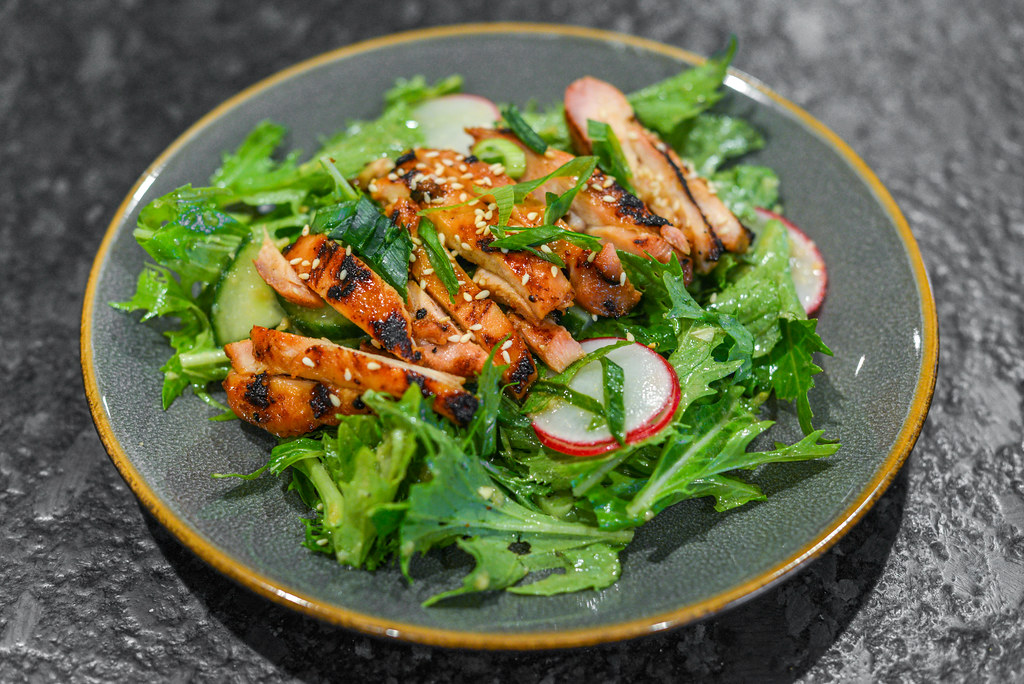 The pandemic totally changed my meal planning and cooking style—where prior I figured things out on a day-to-day basis and winged it regularly, during covid I became a meticulous planner, mapping out every meal for a week to minimize trips to the stores. At the start of the summer, I still hadn't let go of that shift I had made, but I was also getting a bit tired of the thought of cooking just about every meal the whole week. This burnout lead to the first week in over two years I had absolutely no plan for and no idea what I was going to cook, if anything at all. I found myself at the farmer's market during that funk and bought a bunch of random stuff and figured I'd come up with what to actually do with it back at home. One of those items was a large bunch of mizuna, which turned into this really delicious miso-marinate chicken and mizuna salad. 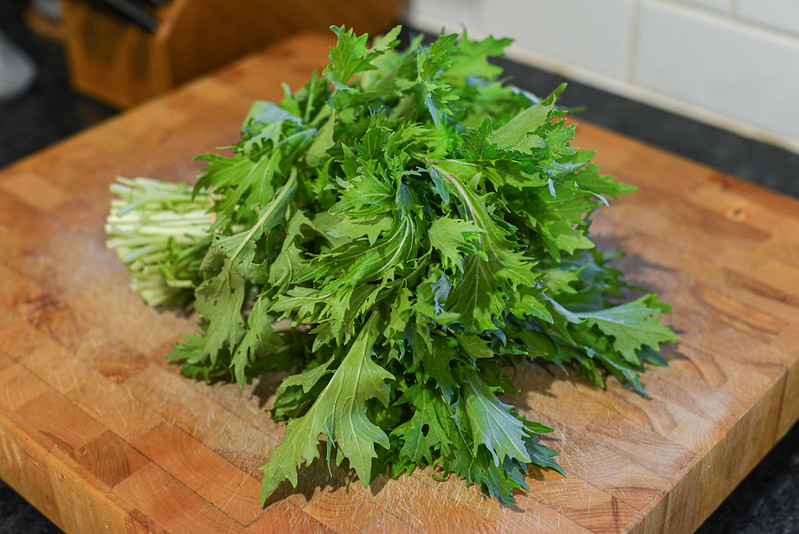 Mizuna was the sole motivator here, and it's a green I hadn't worked with in a very long time, not since I was part of a CSA way back when, while I was still living in Astoria, Queens. Mizuna is a Japanese mustard green and it has a really excellent light mustard bite with a hint of pepper as well. It can be mixed with other greens as a salad base, or merely used on its own, as I did here. 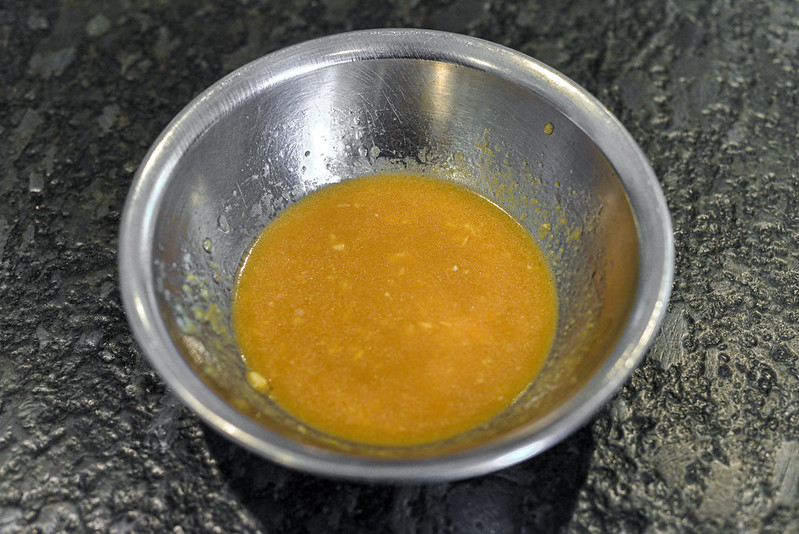 Thinking about what would pair well with the light pungency of mizuna, I landed on savory, salty, and lightly sweet miso. I built up a fairly simple dressing of miso paste, oil, lime juice, garlic, ginger, honey, and sesame oil which has way more depth of flavor than the amount of ingredients that went into making it. 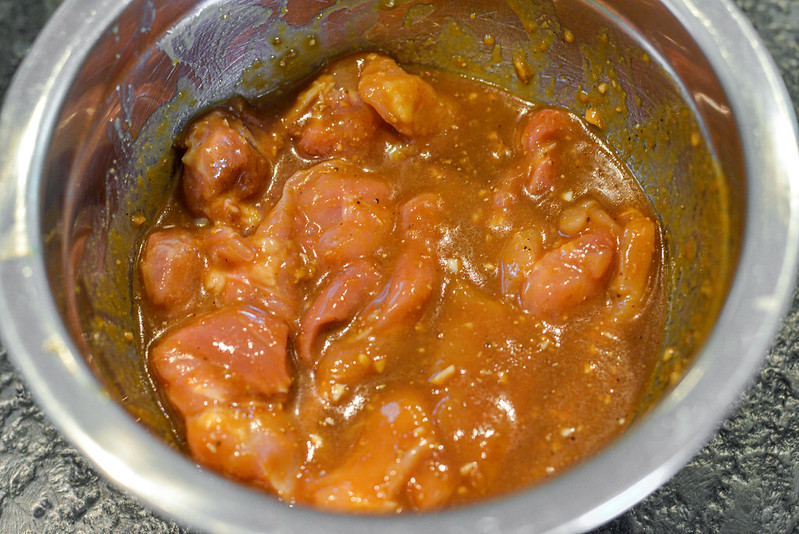 After becoming enamored with how miso worked in a marinade I made for beef last summer, I was set on repeating that here. I utilized many of the same ingredients that went into the dressing, which helped streamline and cut down time, but for the chicken I wanted something with a more more heavy handed flavor since it would inevitably mellow after being cooked. That had me using a lot more miso and adding in things like soy sauce, mirin, and brown sugar. 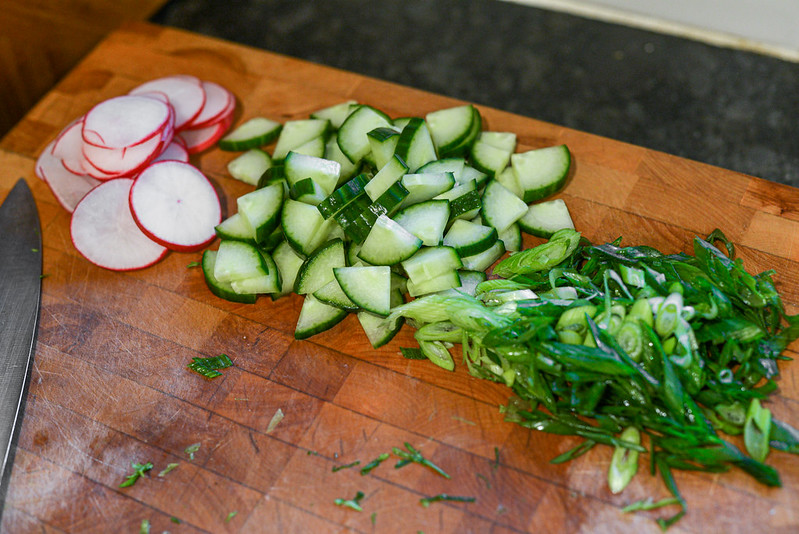 I let the chicken marinate for a couple hours before I lit a fire outside. In the downtime while I was waiting for the coals to be ready, I prepped my salad mix-ins, of which I used only radishes, scallions, and cucumbers, not wanting to make this salad overly complex, but still needing to add some flavor and textural contrasts to make make it more interesting in the end. 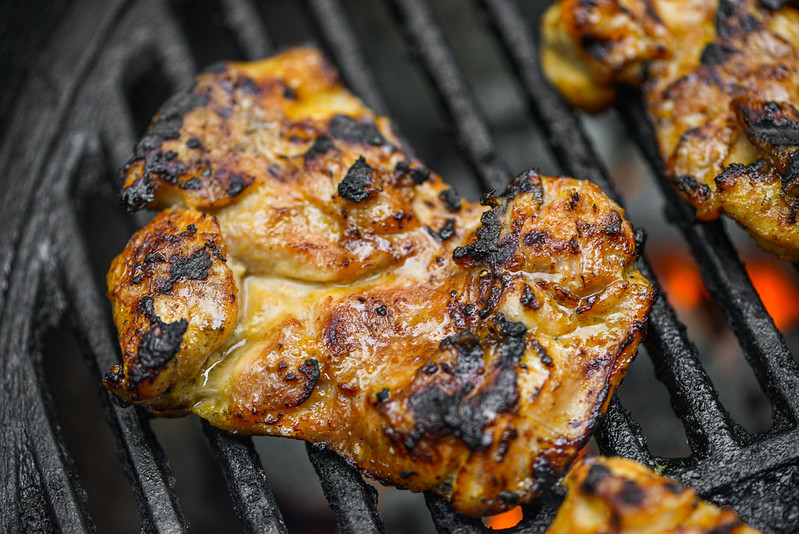 I cooked the chicken over direct high heat, and my main goal here was to get a good caramelized crust along with spotty charring to inject some grilled flavor and sweetness into the final dish. The sugar content in the marinade seemed to hit a sweet spot because I got those characteristics I was looking for at the same time the chicken was done cooking—since chicken thighs are quite forgiving, I wouldn't have minded if it took a bit longer, but if the thighs were charring before they were done cooking, I would have had to move them to indirect heat to avoid burning them. 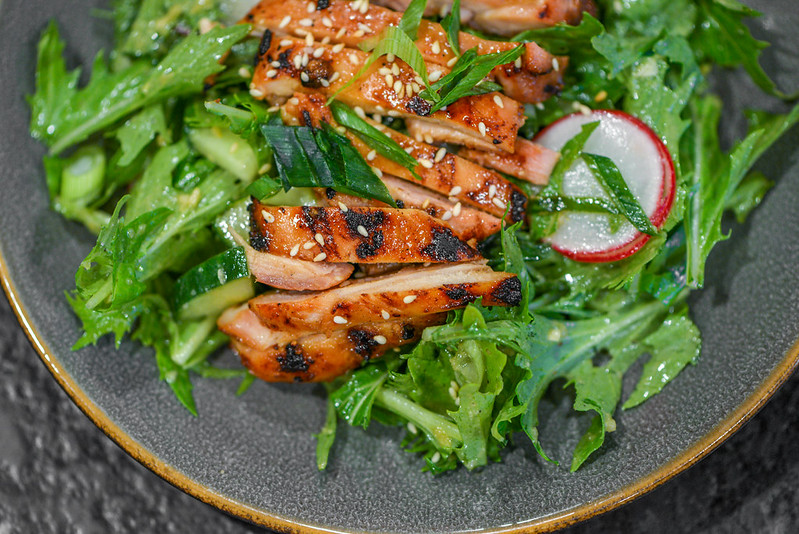 While mizuna was what influenced the flavor direction of this dish, I was also in need of some lighter meals that were highly satisfying, and this certainly fell into that category. The chicken was quite addictive, with a sweet and savory flavor that had me eating almost an entire thigh before I even assembled the salad. It did get even better in the final dish though as that sweetness had a good contrast in the mustardy mizuna and the sharpness of the radishes. The miso dressing also upped that savory quality and tang, as those two elements became more subdued on the chicken once cooked. There has been a lot of advantages to my advance meal planning—less time shopping, less food waste, less cost—but I'm ready to balance that pandemic-era behavior with the more improvisational style too that results in things I likely would not preconceive. 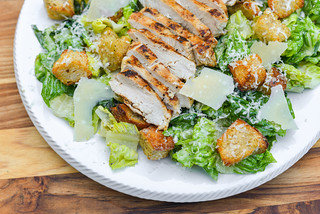